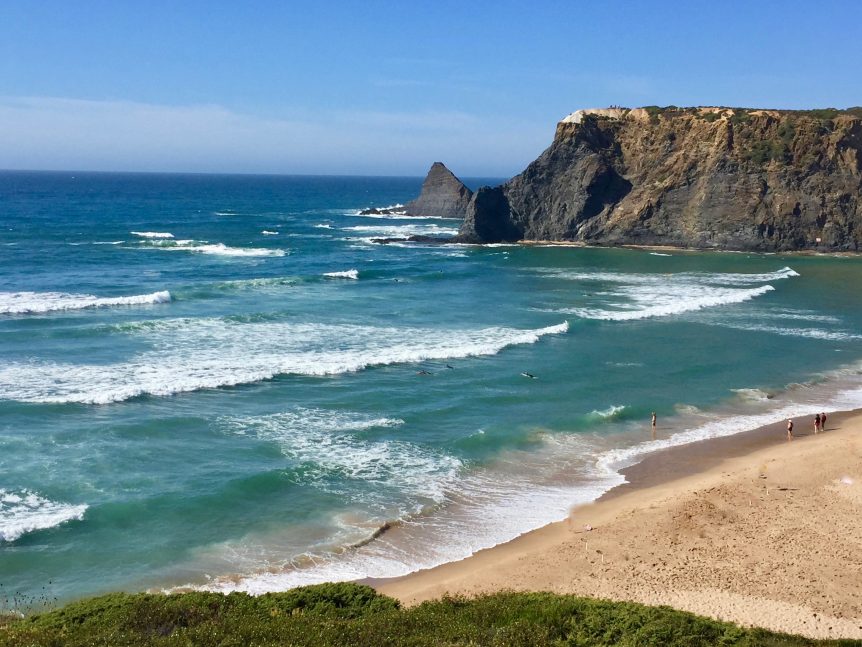 As is often the case, we had two choices on how to get to Guernica — the easy way or the hard way.

The easy way was taking the train from Bilbao to Guernica and then back to Bilbao.

The hard way was taking four buses and a train. But then again, the hard way included a trip to see San Juan de Gaztelugatxe, a small island just off the shore in the Bay of Biscay, and its breathtaking scenery. The only catch was that to see both San Juan de Gaztelugatxe and Guernica in one day, the bus connections had to be timed perfectly, or we could end up in Guernica after everything was closed.

Armed with maps and printouts from a very helpful associate at the tourist information center in Bilbao, and with only a minor amount of trepidation, we chose the hard way.

The next morning, bright and early, we left our apartment, about a half-mile from the bus stop, caught the 8:30am A3518 bus, and forty minutes later we were in Bakio, facing an hour and forty-five minute wait. The Bakio to Bermeo A3524 bus only ran every two hours, and in a victory for intelligent scheduling, our bus got in 15 minutes after that bus had left. Since everything at the bus stop was in Spanish, we were not sure if we were really in the right place, or even if we would be able to communicate to the bus driver that we needed to get off at San Juan de Gaztelugatxe. But then the fates smiled on us, and the bus driver of the A3518 rescued us. Using signs, gestures, and Google Translate, he explained that instead of waiting for the bus, we could take a taxi instead — which would cost just a couple of euros more than the bus.

He got on his mobile, and a short time later the taxi showed up. The taxi, it turns out, was the A3524 bus (a minivan) that was disguised as a taxi when it wasn’t a bus. We got in, and when the driver couldn’t get the door closed, he started driving with it still partially open — “Don’t mind the door,” he said, and as he accelerated the door slid shut.

He let us off right in front of the path down to San Juan de Gaztelugatxe and told us he would be back at 1:15 with the same minivan, this time looking like a bus and to wait for him at the bus stop on the main road.

San Juan de Gaztelugatxe was even more breathtaking than we had expected. We were lucky — while the day was bright and sunny, this was a place where some of the Atlantic Ocean’s fiercest weather showed up regularly, and the waves crashing on the rocks below reminded us of what could have been.

We started from a bluff on the mainland overlooking the island, which is connected to the mainland by a bridge below, and then a paved path that zigzags back and forth to the top of the island. Looking at it from the bluff above, it reminded me of a very short and miniaturized version of the Great Wall of China. At the top is a small church with a bell that, according to legend, you should ring three times and make a wish. 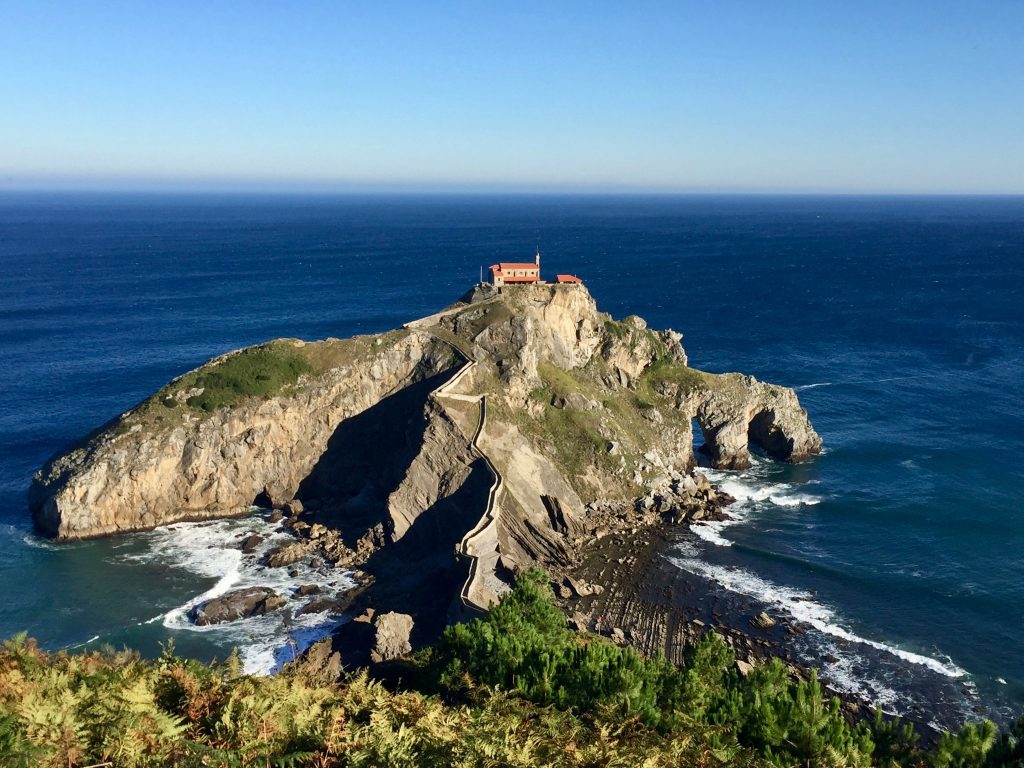 I have always been interested in the Spanish Civil War (1936-1939) between the Republicans, who were loyal to the democratic Second Spanish Republic, and the Nationalists, a group of staunchly conservative and Catholic generals (as well as half the Spanish Army) led by General Francisco Franco.

The Nationalists were a cohesive collection of conservatives, monarchists, and fascists, and supported by Nazi Germany and Fascist Italy — and to a lesser extent Portugal — not just with money and arms, but with troops and aircraft. The aid came even after all the European powers had signed a Non-Intervention Agreement in 1936.

The Republicans were a bizarre ragtag collection of socialists, communists, Trotskyites, Leninists, anarchists, and even a lot of non-Spanish citizens. The Soviet Union, and to a lesser extent France and Mexico, supported them, while the governments of the rest of the world turned their backs, with some British officials preferring a fascist-leaning Nationalist regime to a leftist one. Regardless, the vast majority of citizens around the world supported the Republic because it appeared that this was a last ditch attempt to keep fascism from engulfing Europe. The war did turn out to be a preview of coming attractions for World War II, with one of its defining moments the April 26, 1937 bombing of Guernica by the Condor Legion of Nazi Germany’s Luftwaffe.

Guernica was, and still is, the cultural capital of the Basque people and had no strategic value as a military target. The bombing was simply intended to break the Basque resistance to Nationalist forces. For Germany there was an additional benefit — it was a dry run for a new Nazi military tactic — blanket-bombing a civilian population to demoralize the enemy.

Three hours of bombing reduced the village to rubble. Ironically, what did survive, was the Biscayan Assembly and the Oak of Guernica, both important symbols of the Basque Country. Sixteen hundred civilians — one-third of the population — were killed or wounded, and the subsequent fires burned for three days.

(On May 12, 1999, the German Parliament formally apologized to the citizens of Guernica for the role the Condor Legion played in bombing the town, and agreed to change the names of some German military barracks named after members of the Condor Legion.)

Our original goal was to visit the Biscayan Assembly and the Oak of Guernica that had survived the bombing, and then visit the Guernica Peace Museum if we had time. But since the Yiddish proverb ” Man plans, God laughs” is more often true than not, when we got to the Biscayan Assembly, it was closed for lunch. Since we now had time, we went to The Guernica Peace Museum where we found a superb muti-media story of the Spanish Civil War and the bombing of Guernica. 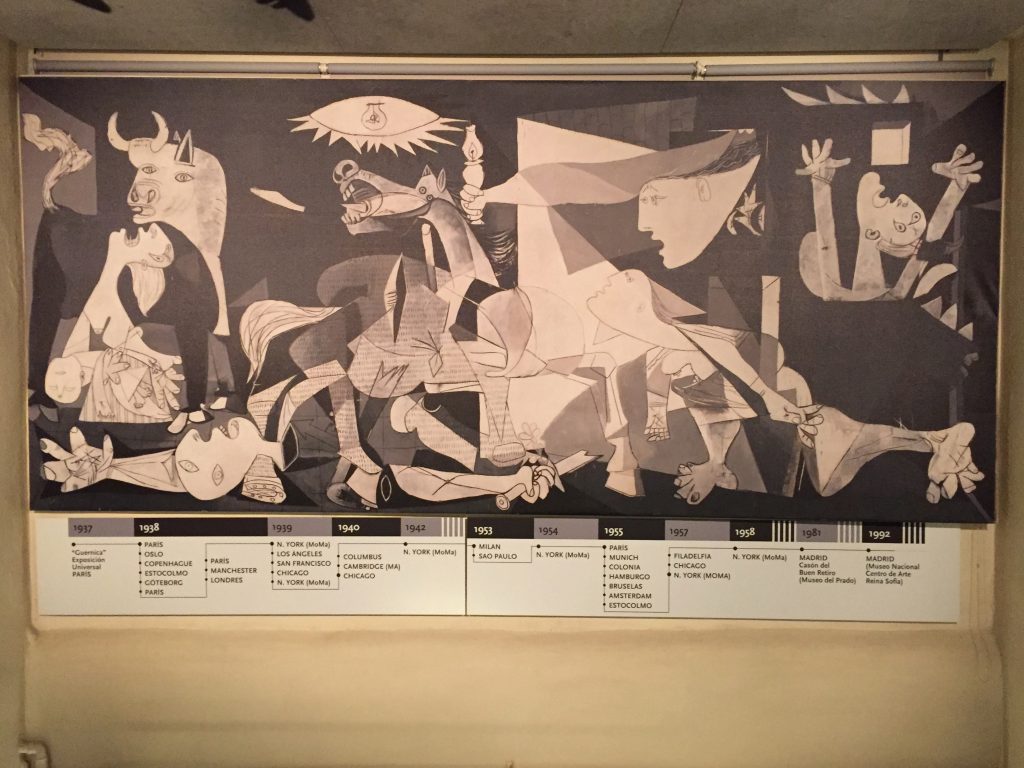 A copy of Picasso’s Guernica

The horrors of the war had resulted in works by artists and writers around the world, especially those living in the Montparnasse district in Paris — among them Alexander Calder’s Fuente de Mercurio (Mercury Fountain) that we saw at Fundació Joan Miró in Barcelona (displayed behind glass for safety reasons), George Orwell’s Homage to Catalonia, and Ernest Hemingway’s For Whom the Bell Tolls, and, probably the most well-known work, Guernica — Pablo Picasso’s haunting painting of the terror bombing of Guernica. I had first seen it at the Museum of Modern Art in New York City decades before. At Picasso’s request the piece was to stay there, and not be returned to Spain until liberty and democracy had been established. (Today it is back in Spain at Museo Nacional Centro de Arte Reina Sofía in Madrid where we saw it before our trip to the Basque Country.) It had affected me deeply then, and when we decided to go to Spain, I was determined to go to Guernica, even though I wasn’t quite sure what I would find there. 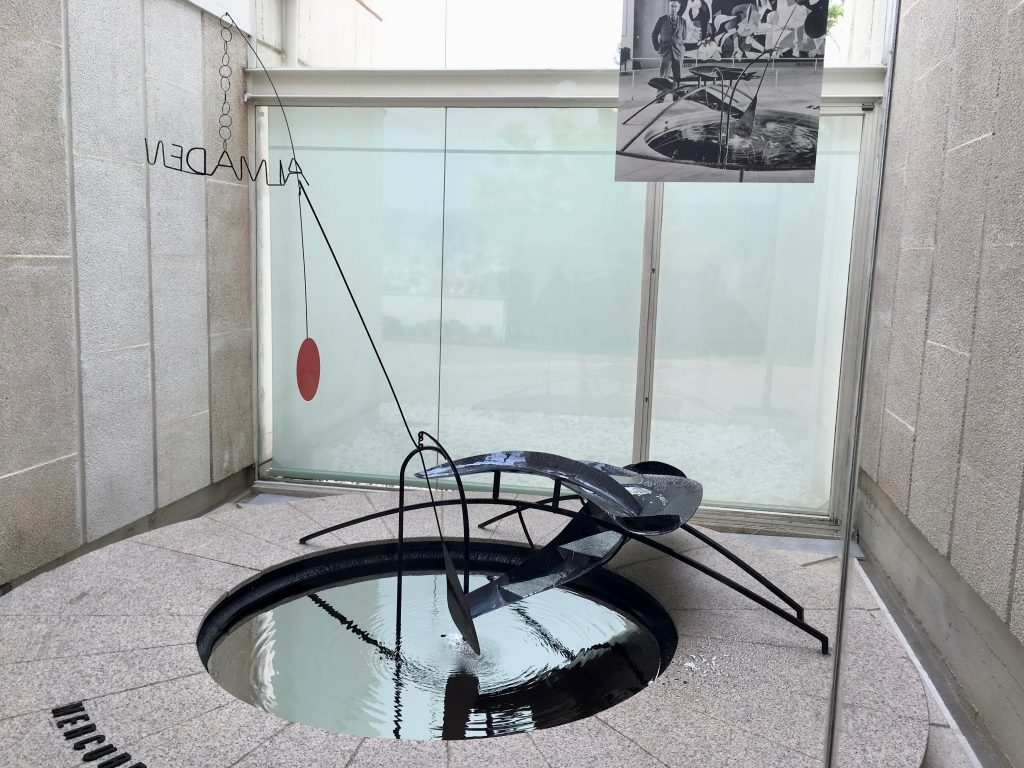 Alexander Calder’s Mercury Fountain – and yes, those are drops of mercury

After our trip through the Guernica Peace Museum, we did go back to the Biscayan Assembly and the Oak of Guernica, but there was not much there about the bombing or war, and it was almost anti-climactic after the Peace Museum. 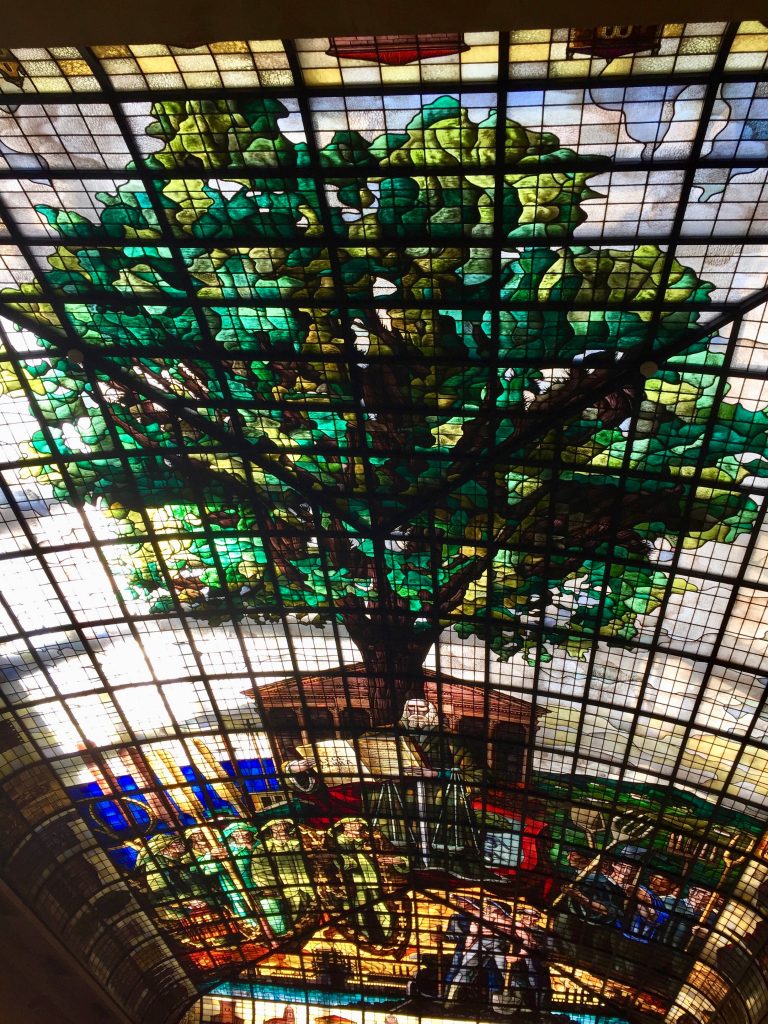 What struck me as we explored Guernica was the message world leaders sent by their lack of action in the face of the strong Nazi and Fascists support of the Nationalists and the bombing of Guernica by the Luftwaffe. They made it perfectly clear they weren’t going to do anything to stem the rising tide of fascism — appeasement being the policy du jour. And they continued to do nothing when Germany invaded Czechoslovakia in 1938 and Poland in 1939.

As we learned in the Republic of Georgia, history continues to repeat itself. In the spirit of “the Russian reset,” the United States did nothing when Russia invaded Georgia in 2008. This gave Putin what he thought was carte blanche to go ahead and invade Crimea in 2014 — setting off another political crisis (as we found out in Russia) when the unexpected sanctions drove Russia deep into recession.

And while it is true, that as George Santayana reminds us,“Those who cannot remember the past are condemned to repeat it”, but remembering is not sufficient to keep things from repeating. Thought must be accompanied by action, and that is where we have seemed to have fallen down — over and over again.