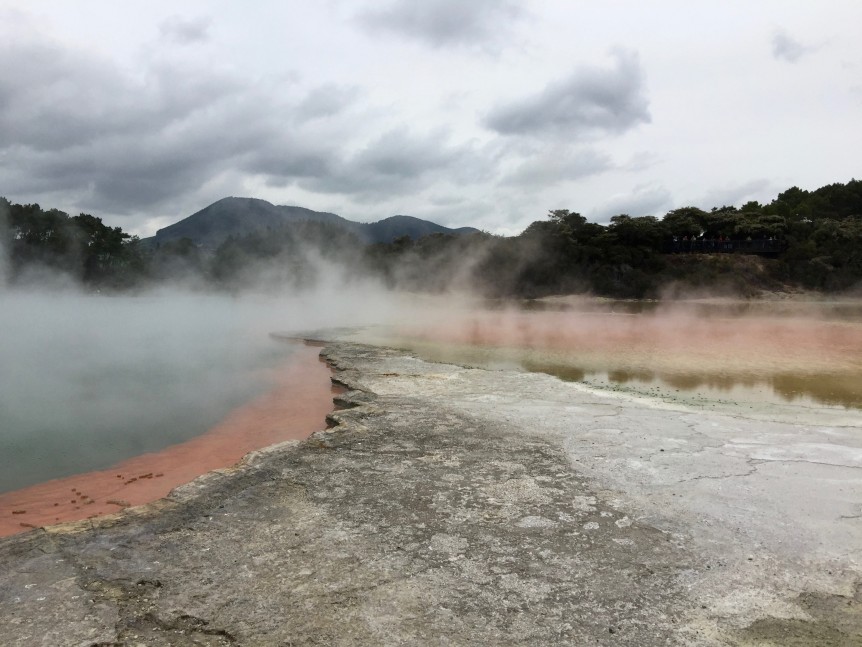 After our road trip in the South Island, with what little time we had left, we planned to explore the North Island.

One of the places we wanted to visit was Napier. In 1931 it was devastated by a two and half minute, 7.8 magnitude earthquake, and the subsequent fires. The local newspaper, The Dominion reported, “Napier as a town has been wiped off the map.” But in not just one, but two twists of fate, some positive results came out of the disaster. One was the uplifting of 40 square kilometers of seabed to become dry land. Before the earthquake the size of Napier had been limited by the sea, and this turning of seabed into dry land would allow a rebuilt Napier to grow. While interesting, especially given my newfound passion for seismic events, that was not why we decided to visit Napier.

Since most of the region’s rebuilding took place in the 1930s it was rebuilt in the styles of that time — Stripped Classical, Spanish Mission, and above all, Art Deco. But Napier’s Art Deco was unique — decorated in styles that include Egyptian, Mayan, and Maori. This second twist of fate turned Napier into one of the finest collections of Art Deco in the world. 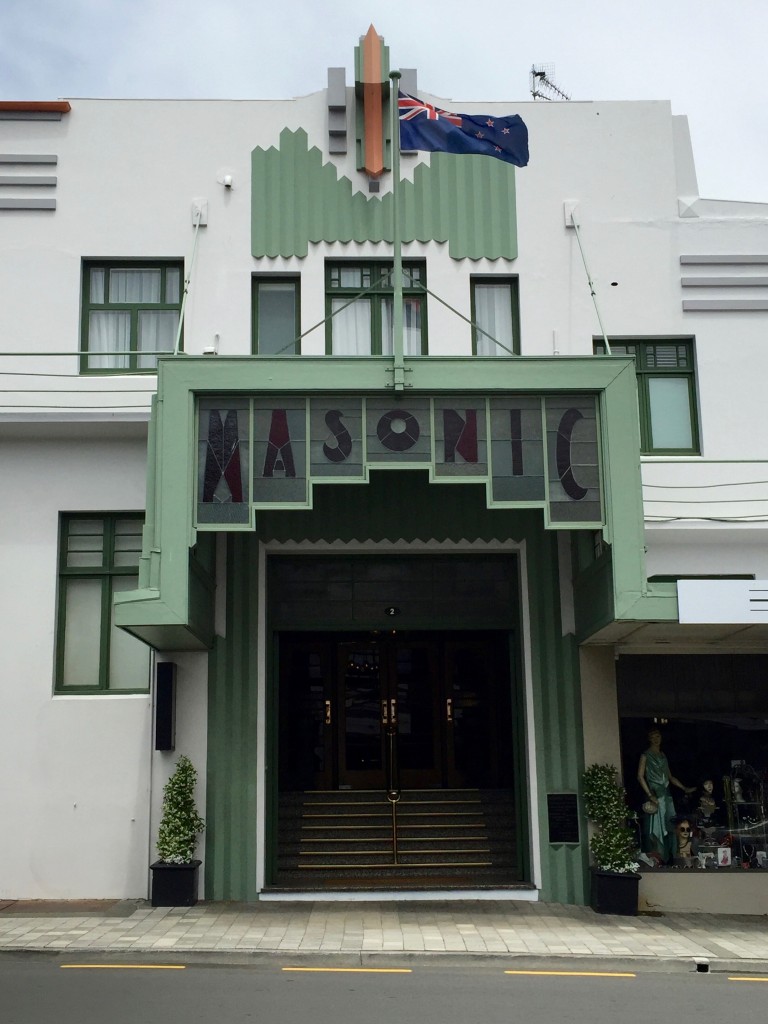 Even though it was one of the finest collections of Art Deco in the world, as one might expect, its Art Deco heritage was never appreciated, and in the 1980s, in the name of progress, these “old fashioned” buildings were being razed and replaced with “modern” glass and aluminum office blocks. Fortunately, some zealous “radicals” were not willing to stand by and watch the demolition of Napier’s architectural history, and in 1985 the Art Deco Trust was formed. It not only saved the city from 80s modern offices but also promoted it as the second major Art Deco city in the world behind Miami.

We took a walking tour organized by the trust and were amazed by the number and conditions of the buildings. The tour also included a fascinating movie, with original footage, about the earthquake and the subsequent rebuilding. 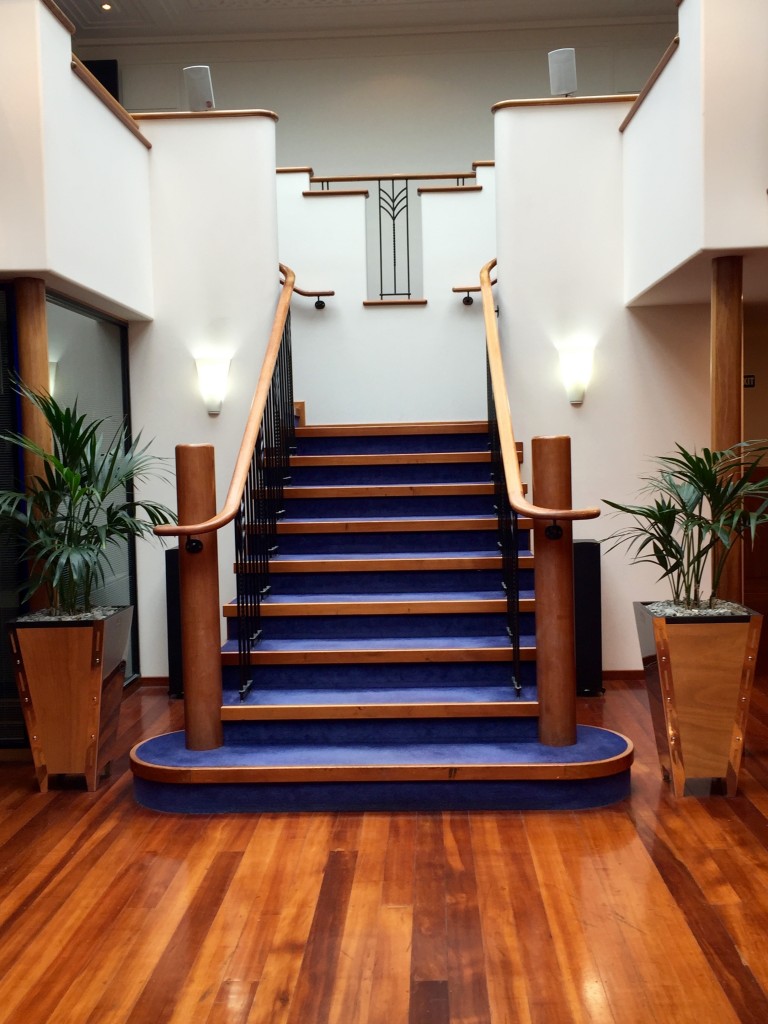 I liked this staircase 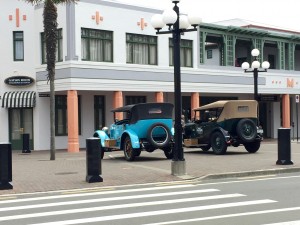 We had such a delightful time in Napier, and met so many interesting people involved in keeping the Art Deco heritage alive, we decided to  come back to Napier for an annual Art Deco weekend — and yes, costumes and all.

After Napier, based on what we had learned in Wellington, the rest of our trip turned mostly into a geothermal safari. (I’ve also posted  some of the photos that we took.)

We drove to Taupo, a very disappointing town, but home to a couple of spectacular (some geothermal and some just downright beautiful) places.

The Aratiatia Dam gates on the Waikato River are opened a few times a day, turning downstream into raging rapids. It was almost like watching a disaster movie in slow motion. We were so fascinated we came back the next day on our way out of town. The day before we had a scenic view of it all happening from up high; the second time we were lower down and closer to the river, where it was more up close and personal. 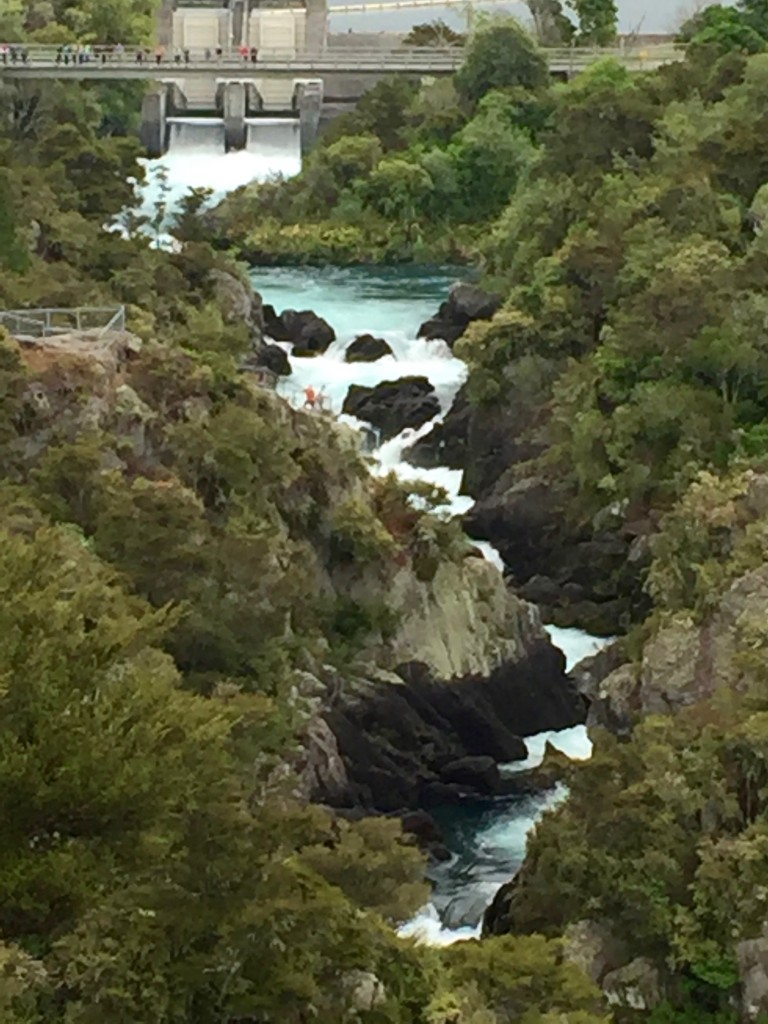 As the gates open

Huka (the Maori word for ‘foam’) Falls is an 11-meter high waterfall and allegedly the most visited and photographed natural attraction in New Zealand. 220,000 liters of water per second flow through the rock face, which is enough, as the marketeers tell us, to fill one Olympic-sized swimming pool in 11 seconds. 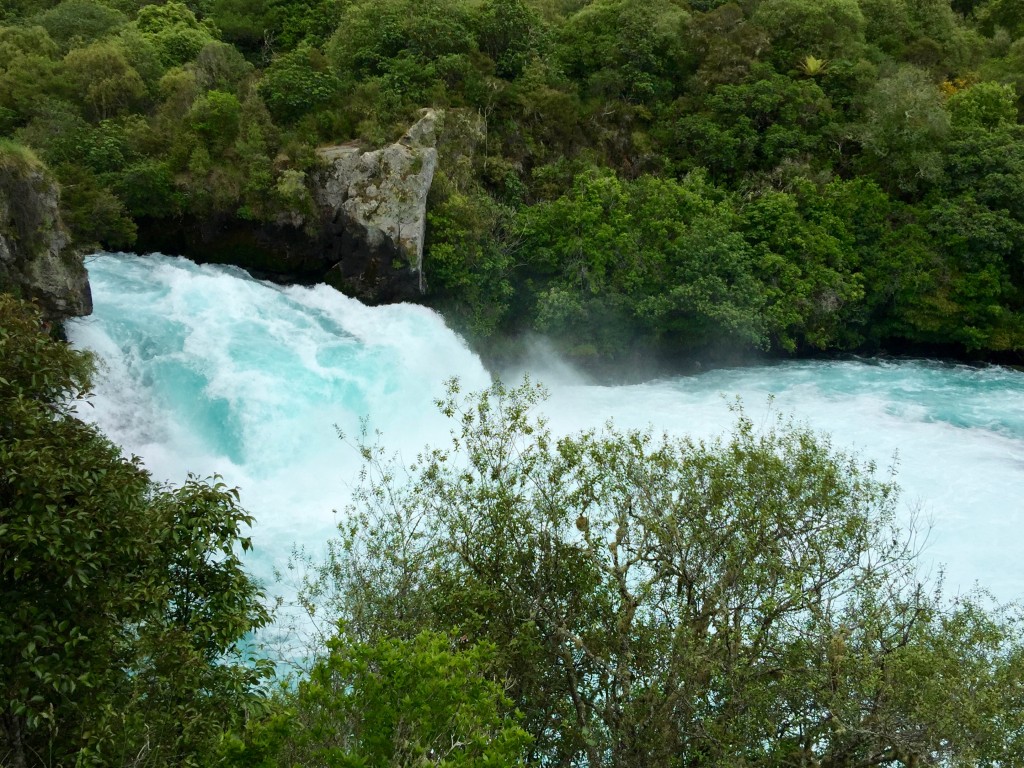 Thy are quite majestic

As the most visited natural attraction it was a little discouraging. People drove up and jumped out of cars and fleets of tour buses disgorged their passengers, most of whom proceeded to take selfies and pictures of each other in front of the falls, and then just as quickly left and headed off to the next tourist sight.

But even more interesting to us was the Craters of the Moon. In the 1950s a large area of land north of Taupo suddenly began to get hot and emit steam, triggered by the lowering of underground water pressure by a nearby geothermal power station (this seems like a contradiction, but that’s what they say). Superheated water rose to the surface, escaping through any vent it could find, along with craters of boiling mud and other geothermal activity — with new events still happening. 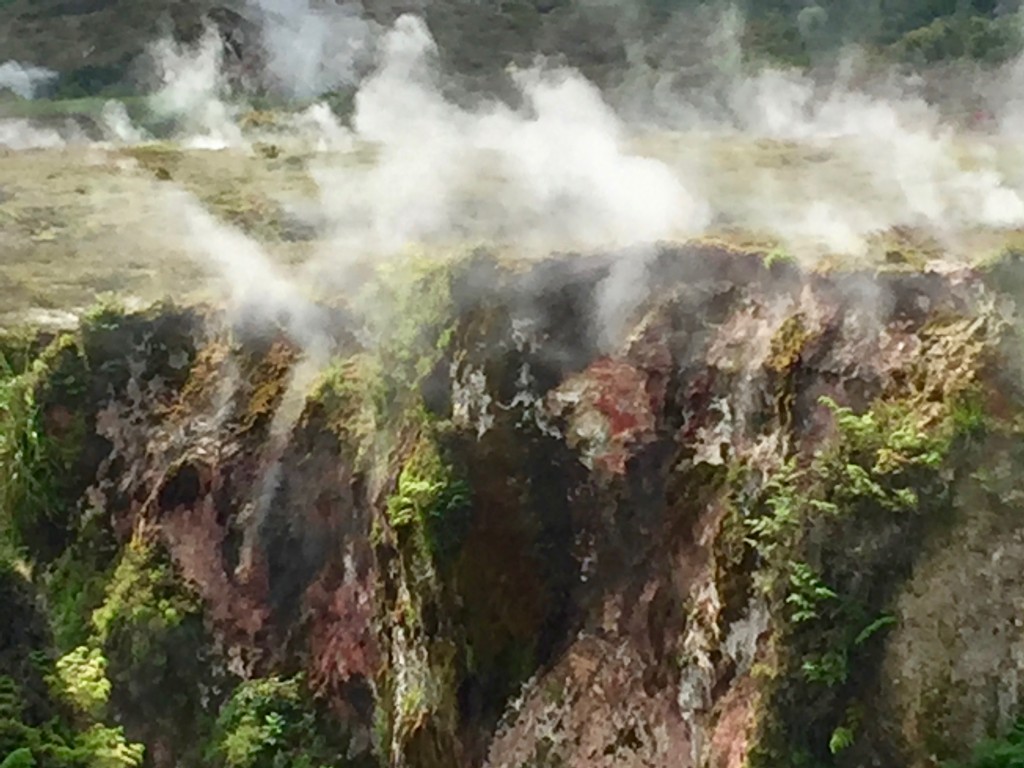 Yes, I know, there is no water on the moon

As capitalism sprung into action, wooden walkways and viewing platforms on the edge of large craters were built. And Craters of the Moon was born.

Finally, after our fill of craters and clouds of slightly sulfurous (but not too bad) steam, we left and continued to what we hoped was an even more spectacular place to see geothermal activity — Rotorua.

We started our trip at Te Puia—New Zealand’s center for Māori culture —which includes the Pohutu Geyser and quite a bit of other geothermal activity. 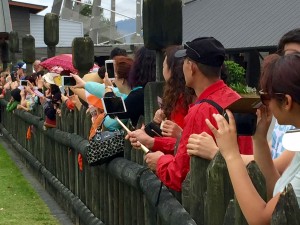 Waiting for the Maori experience

Frankly, except for the geothermal activity, I wasn’t that excited to go to Te Puia, expecting another manufactured experience similar to other manufactured experiences like “authentic” Hawaiian luaus. And I wasn’t disappointed. Although to give credit where credit is due, there are also schools at Te Puia devoted to preserving Māori culture — weaving, carving, stone and bone carving, and waka (canoe) building.

But the big attraction for me was the geothermal activity.

Sitting on the sinter terraces known as Geyser Flat, the Pohutu Geyser is the largest active geyser in the southern hemisphere, and fortunately for us and other visitors, it is also the most reliable geyser on earth. It erupts to a height of 30 meters (100 feet) up to 20 times a day — with eruptions lasting from a few minutes to several days, and in one rare case between 2000 and 2001, an eruption lasted for over 250 days — which is even cooler that 20 times day. 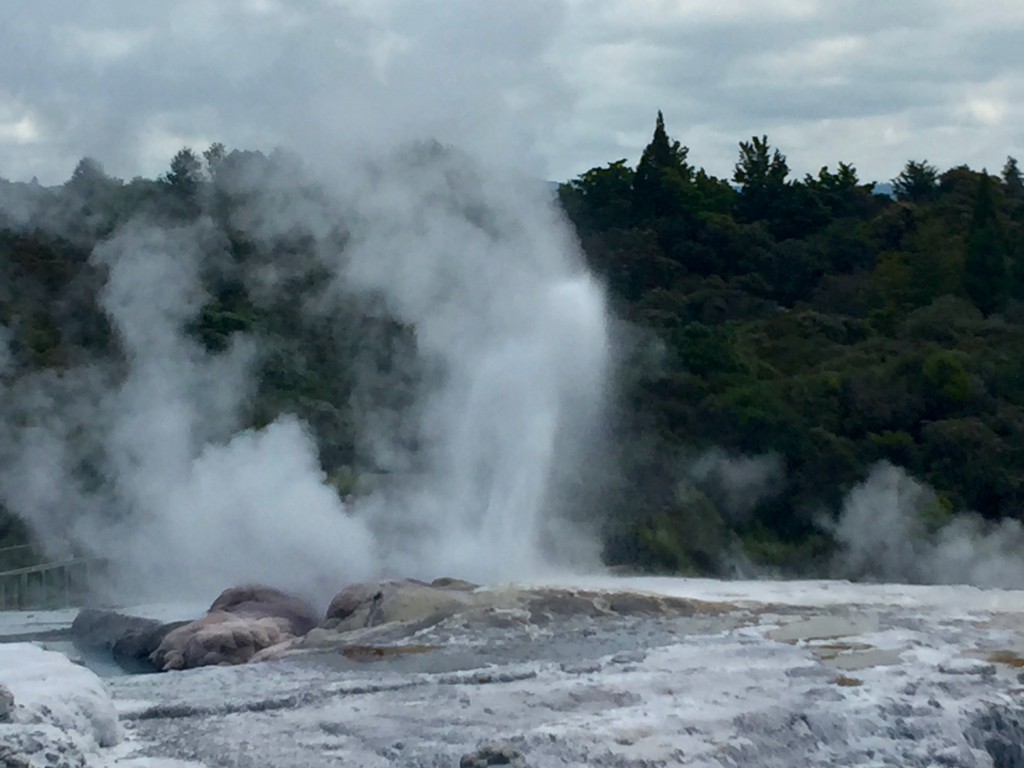 “So what causes a geyser?” you may ask (as I did), continuing my descent into geothermal geekdom. I learned that due to intense heat from molten rock underground (the earth’s mantle is very thin here) ground water starts to boil and create steam. Pressure builds inside an underground chamber until it eventually forces its way through the geyser vent and shoots out all that superheated water and steam. Once the steam is released, the geyser chills (pun intended), the chamber starts to fill with water again, and the process starts over.

But this, and the other geothermal attractions at Te Puia turned out to be only a preview of what was to come at Geothermal Wonderland — Wai-O-Tapu — an active volcanic area. Although it might conjure up images of hell, it was a geothermal heaven that staggered the imagination. As we walked along the tracks we marveled at what we saw — steaming orange, turquoise, and bright green pools, splashes of yellow arsenic, waterfalls — it did look like we were in a Hieronymus Bosch landscape. 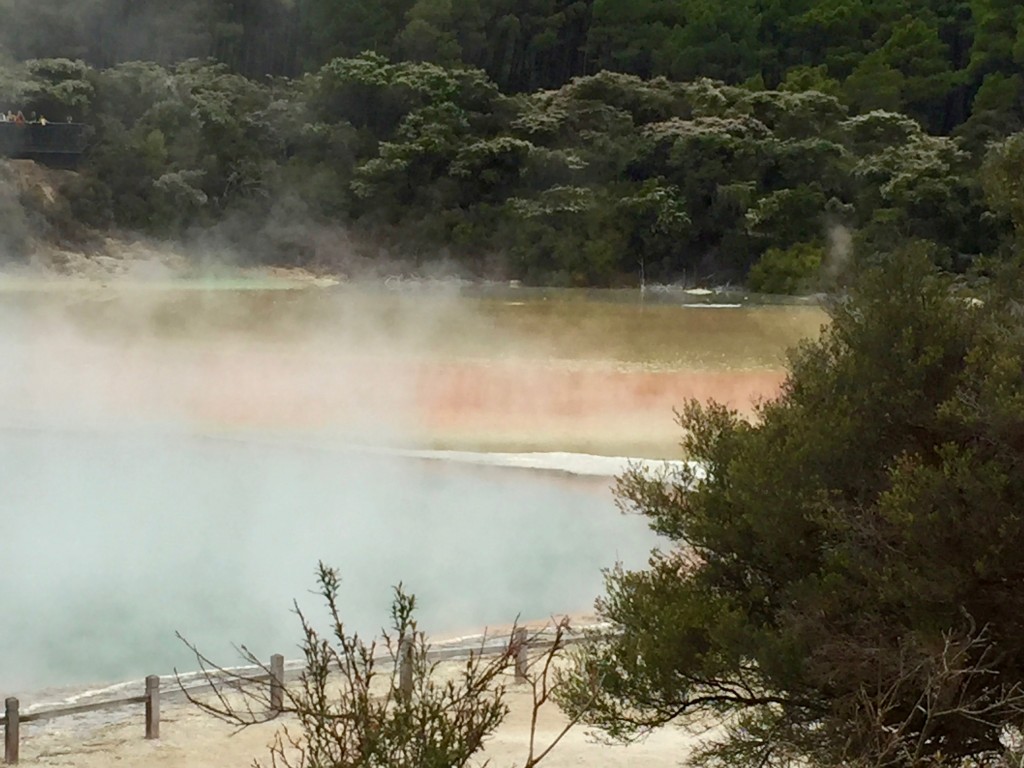 You really had to be there

And, oh yes, lots of selfies. 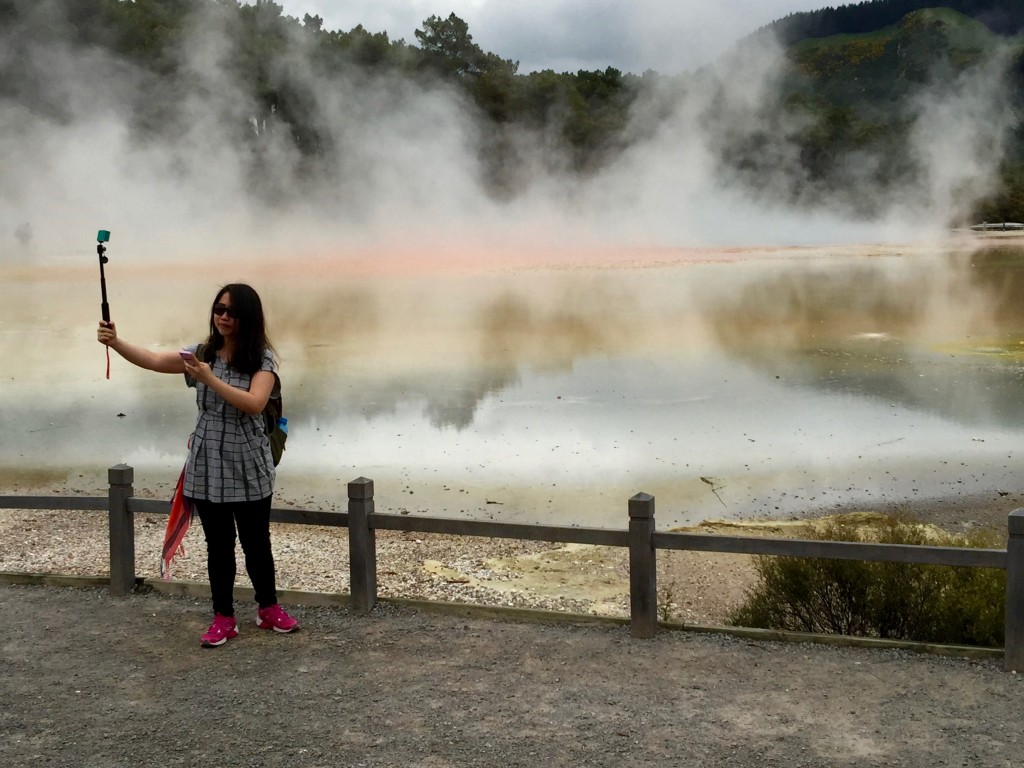 But there was still something missing for me — neither Te Puia nor Wai-O-Tapu had a really cool mud pool. We had seen a few not very exciting ones, and I became obsessed wth finding a mud pool that met my standards of amazing.

When I asked a guide about where we could find one, he told us we needed to go to what is locally known as the Mud Pool, formed after a large mud volcano was destroyed through erosion in the 1920s, and gave us some rather interesting directions on how to find it.

And for some reason, this became the grand finale of my exploration of geothermal activity — much to Linda’s delight, because I would finally stop talking about it. I was so inspired I even took a video. 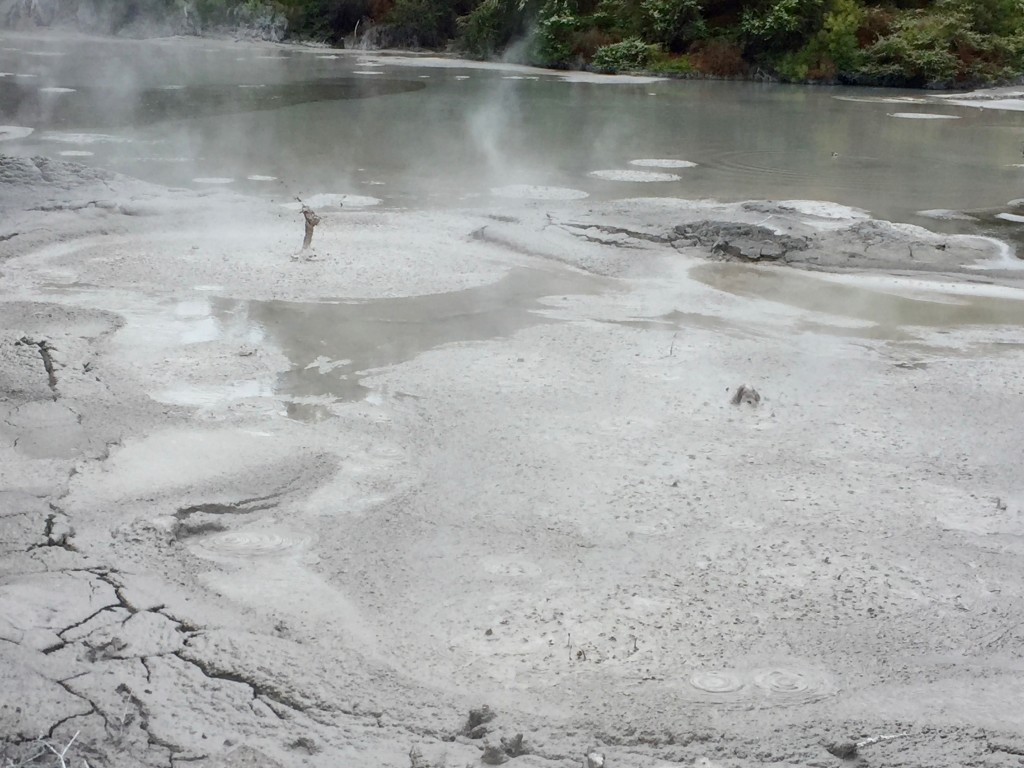 After a few days we left Rotorua, drove to the Auckland airport, and flew to Phnom Penh, Cambodia—a very different kind of beautiful place.