We had originally decided to go to Berlin because we had heard that it was a great city (especially when it came to the arts and street art), and we even rescheduled our trip to be there in early October, despite the fact that it would be starting to get really cold, in order to see the Festival of Lights.

And it is a great city — with great art, a remarkable number of friendly people, good food, and easy to get around using public transit and by walking.

But in Berlin, like in the rest of Central and Eastern Europe, there is no escaping WW II — the past hanging like a dark cloud above the city.

But it has come a long way from Chancellor Konrad Adenauer’s response, “You don’t celebrate your defeats”, to the question in 1955 if there should be an official event marking the 10th anniversary of the liberation from the Nazis. The cloud is getting lighter and wispier as Germany and Berlin have generally taken to heart George Santayana’s admonition “Those who cannot remember the past are condemned to repeat it” and institutionalized its past in monuments, memorials, and museums.

Stolpersteine (created by artist Gunter Demnig) are plaques in the cobblestones to commemorate victims of Nazi oppression in front of their last chosen place of residence — symbolically returning them to their neighborhood after being ripped out of their daily lives. 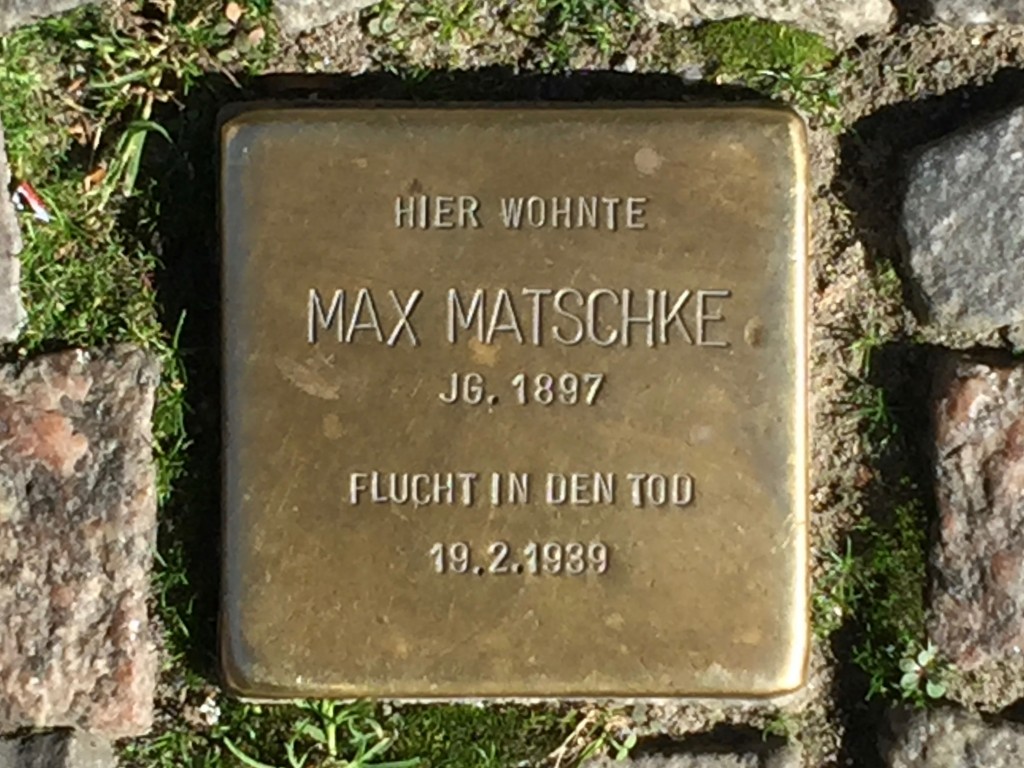 In a cobblestone on a Berlin street

The Topography of Terror Museum is on the site of the headquarters of the Gestapo and the SS during 1933 to 1945, which were largely destroyed by Allied bombing during early 1945, and the ruins demolished after the war in the 1950s. The focus of this exhibition is a time line of the actions of the SS and Gestapo as well as the crimes they perpetrated throughout Europe. 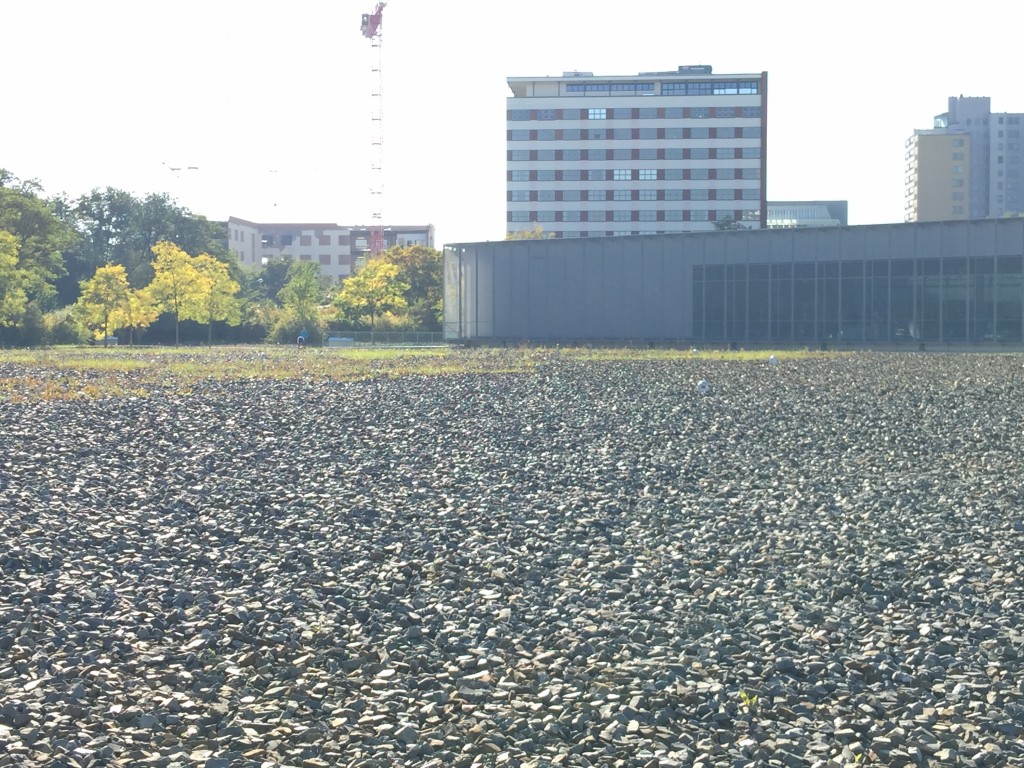 What struck both Linda and me was German historian Ulrich Herbert’s perspective on the German public’s view of Nazi anti-Semitism. He argues that while the regime’s Jewish policy was not popular among the population, neither was it a subject of primary concern. People were willing to excuse Hitler and the Nazis their “mistakes” or “excesses” because of the improvements they made to the social and economic lot of most Germans.

While the Topography of Terror, as compelling as it is, enables people to understand the rise of the Nazi party, there are also two museums that tell the story of the consequences of the Nazi actions.

The Jewish Museum Berlin’s permanent exhibition is not just about the Holocaust, although it has a small section that mentions it. It is in spirit similar to the POLIN Museum of the History of Polish Jews on the site of the former Warsaw Ghetto and presents Jewish life in Germany during 14 historical periods from the Middle Ages to the present, showing how tightly Jewish life and German history are interwoven. According to its architect Daniel Libeskind, the three basic ideas that formed the foundation for the Jewish Museum design are: one cannot understand the history of Berlin without understanding the enormous intellectual, economic and cultural contribution made by the Jewish citizens of Berlin, the meaning of the Holocaust must be integrated physically and spiritually into the consciousness and memory of the city of Berlin, and Berlin and Europe can only have a human future by acknowledging and incorporating this erasure and void of Jewish life in Berlin.

It consists of two buildings – an old baroque building, that formerly housed the Berlin Museum, and a new building accessible only via an underground passage from the old building. 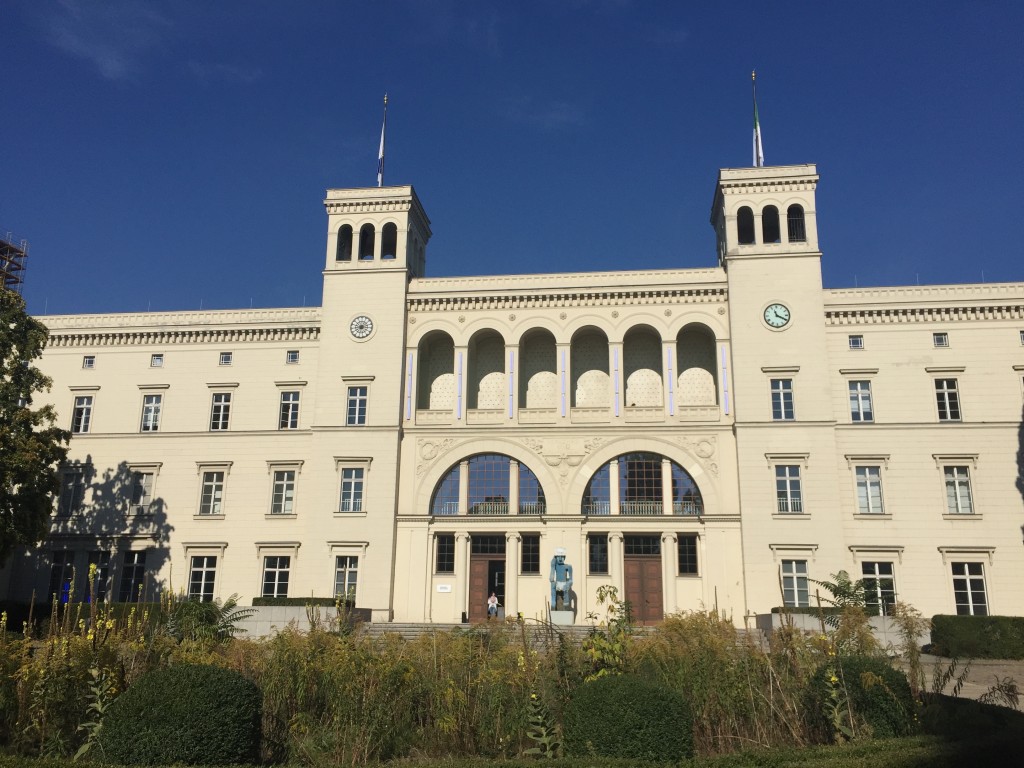 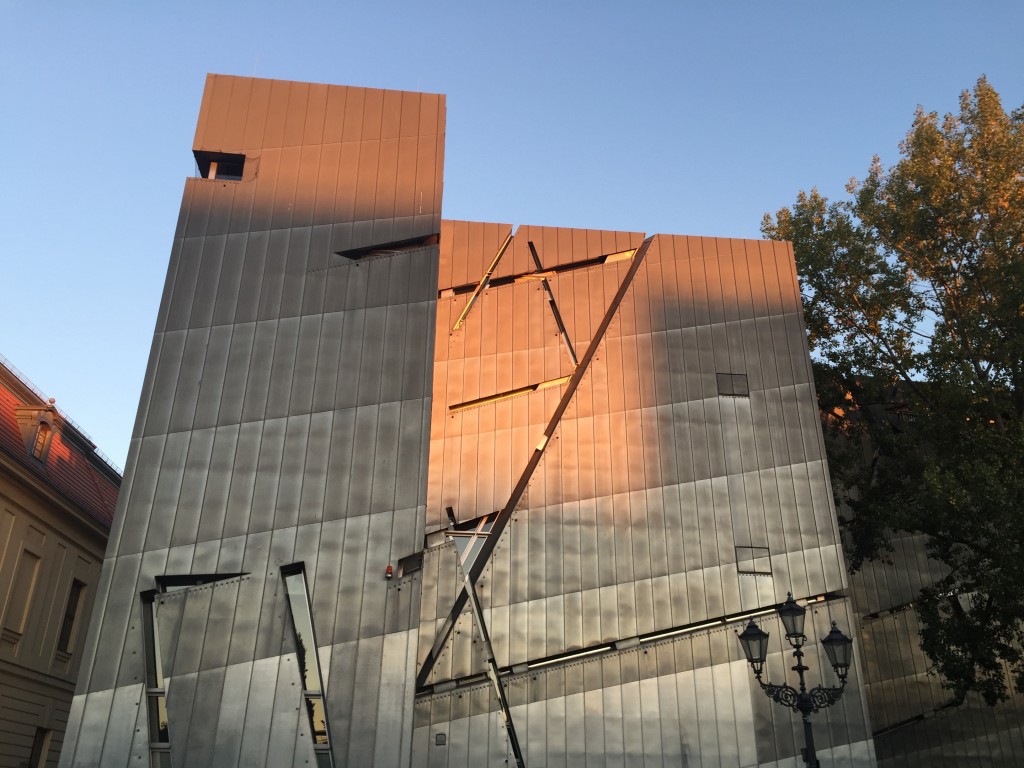 In the basement entrance to the new building we found three intersecting, slanting corridors named the “Axes,” — three ways to look at the German Jewish experience. The first axis leads to the long staircase to the permanent exhibition with its story of the ongoing roles of Jews in German history, emigration from Germany, and the Holocaust. The second axis leads to the Garden of Exile, with 49-foot pillars topped by Russian olives, and its tilted foundation. The third axis leads to the Holocaust Tower, a 79 foot (24 m) high empty concrete silo, neither heated nor cooled, with the only light coming from a small slit in its roof. 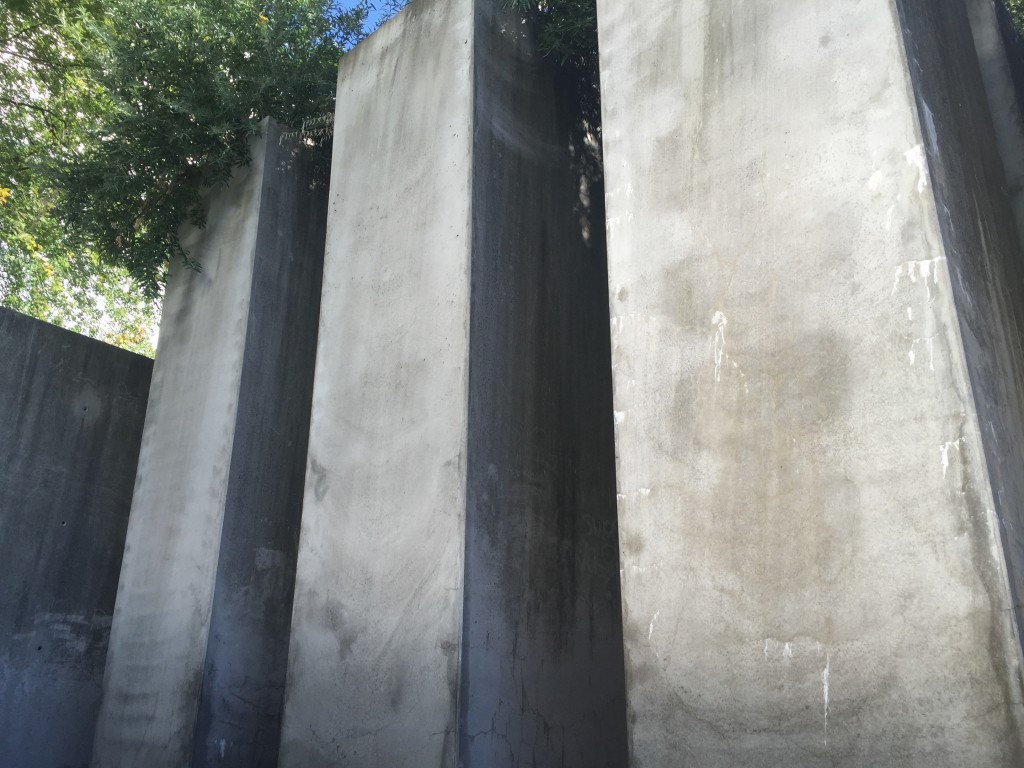 The Garden of Exile 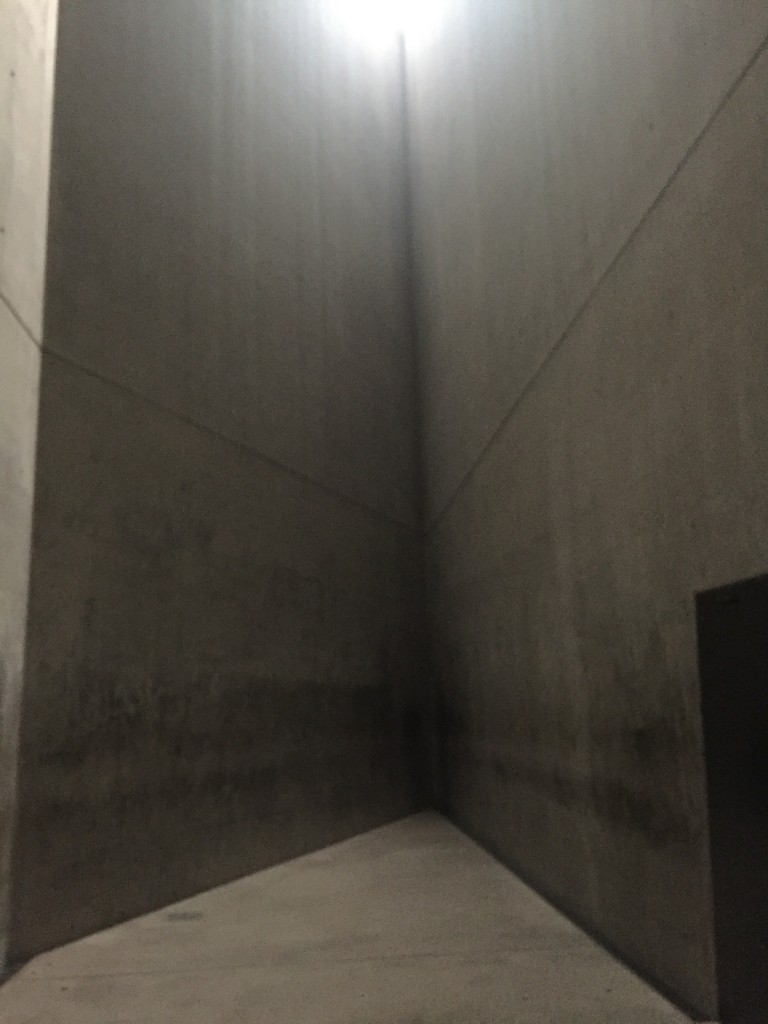 The permanent exhibition consists of two stories with two paths through the museum. The two paths tell the story of cultural connections and ways of thinking. The intersection of these paths is marked by five “Voids” — empty spaces with bare concrete walls and without any artificial light — that cut through the entire museum.

They represent the absence, and express the disappearance of Jewish culture in the city and according to Libeskind “that which can never be exhibited when it comes to Jewish Berlin history: Humanity reduced to ashes.” 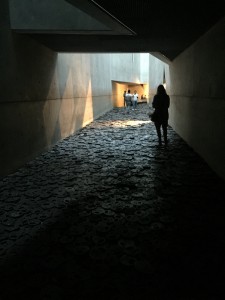 You can look into but can’t enter these empty spaces with one exception — the Israeli artist Menashe Kadishman’s steel sculpture “Shalechet” (Fallen Leaves) covers the entire floor of one of the five Voids — the Memory Void which consists of 10 000 faces punched out of steel distributed on the ground of the void. Visitors are invited to walk on the faces and listen to the sounds created by the metal sheets, as they clang and rattle against one another. He dedicated his artwork not only to Jews killed during the Shoah, but to all victims of violence and war. 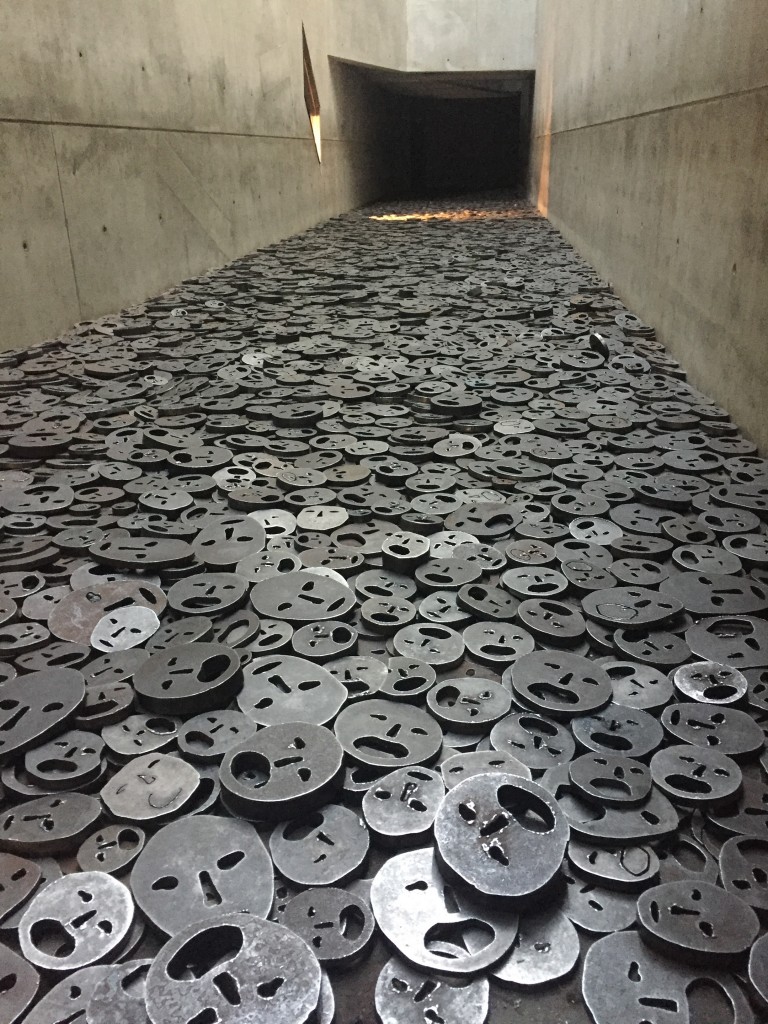 But the main stop for many people is the Memorial to the Murdered Jews of Europe. It struck me as we traveled through Eastern Europe, that now when people talk about the Holocaust, they use the word “murdered”, referring to the deliberate action and not the consequential result — “killed”.

This is a memorial created for the German people, and not for the Jews, and designed not just to commemorate, but to warn and even reprimand.

The Memorial has a total of 2,711 concrete slabs or “stelae” (an upright stone slab or column that often serves as a gravestone) placed in an irregular field. 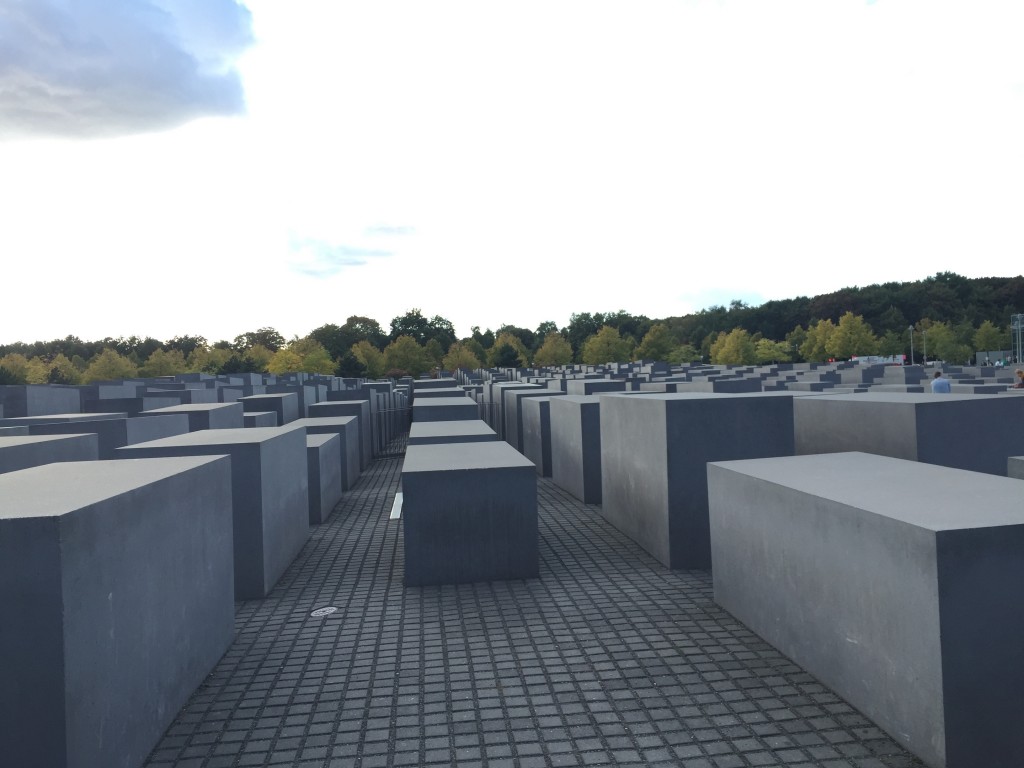 According to Peter Eisenman, the architect,  he wanted to create an illusion of instability in an apparent system of order — through the gray coloring, different heights of the stelae, the irregular floor, and the not quite right angles. As you wander through the memorial you get a sense of disorientation and, as people and the idea of the city fade into the background, a sense of depersonalization.

In addition to the memorial is an underground Information Center designed by Dagmar Von Wilken. It connects to the stelae above with its ceiling reflecting the shapes above, and with its rectangular benches, horizontal floor markers, and vertical illuminations. It takes the abstract nature of the memorial and reduces it to the level of the individual victim — providing a bridge between the abstract architecture and the concrete reality of the Holocaust.

The Information Center provides a context for the Memorial through five rooms, where one can learn about the Nazi horrors at a personal level. The first, the Exhibition Prelude, is a brief overview of the events between 1933-1945. The second, the Room of Dimensions, consists of illuminated panels that contain the letters, diaries, and pictures of Holocaust victims, often thrown from trains as they left for the camps. The third, the Room of Families, focuses on 15 specific Jewish families and the fates of its members as it describes their lives before, during, and after the Holocaust. To me the most powerful was the fourth, the Room of Names. The names of all known Jewish Holocaust victims, obtained from the Yad Vashem memorial in Israel, are read out loud. At the entrance to the room it explains that Jewish law requires that the dead be remembered by the living — their families or communities. But during the Holocaust entire families and villages were wiped out, leaving no one left to remember them. It would take 7 years 11 months 27 days to listen to all the names of the victims

As Joseph Stalin said “One death is a tragedy; one million is a statistic” — and these two rooms are remarkably effective into turning the statistics of the Holocaust into a series of tragedies.

The last room, the Room of Places, lists existing sites and Holocaust research institutions throughout Europe.

I was impressed by the young people I observed in the Information Center. They were not simply going thorough the Information Center, but were paying serious attention. On Sunday, the day we were there, the Archive was also open, and you could listen to and watch interviews of Holocaust survivors. It too was filled with young people intently listening to and watching the interviews.

I found the information center to be a heart-wrenching memorial to the murdered Jews, and one of the most moving and emotionally engaging memorials I have ever been to. For me it took the focus away from murder on an industrial scale and made it a series of personal murders.