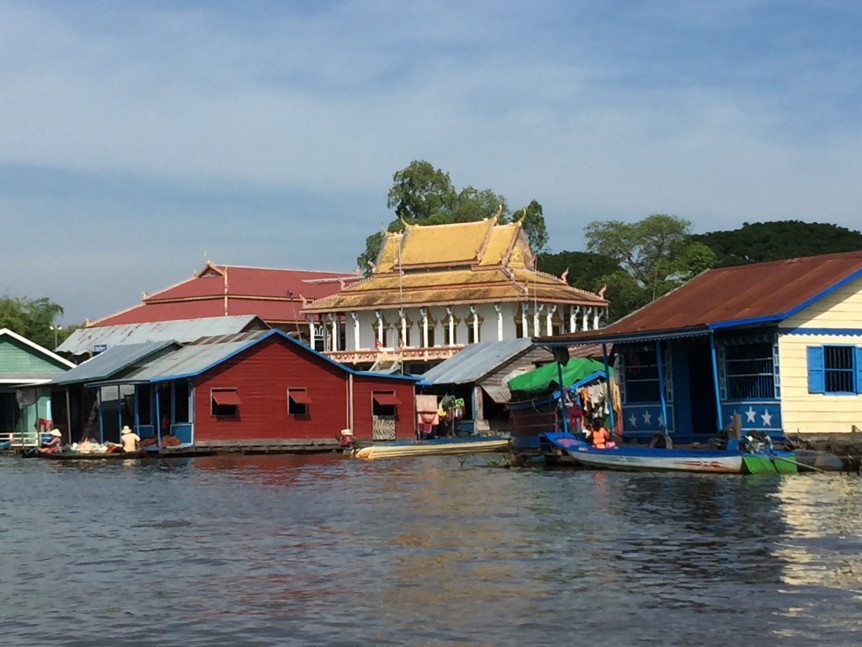 A chance encounter in Battambang ended up making real what we had learned about Cambodia at S-21 and Angkor.

After Angkor, we decided we needed some downtime. We had been on the go for five months, and we were way behind in emails, our blog, and just general housekeeping. While traveling eliminates the kind of day-to-day chores you have when you live in a single place, it replaces them with a new, albeit smaller set. You still have to plan what you are going to do today, where you are going to travel to next, monitor your credit card bills, at least think about filing your taxes, and so on.

So we decided to spend some time in Battambang — a city relatively untainted by tourism and mass development, and the creative center of Cambodia.

We could have taken a four-hour bus trip from Siem Reap, but we decided to take the boat through Tonle Sap Lake and then down the Sangker River (about 10 hours). The boat trip had mixed reviews on the internet, but even the negative ones made the trip sound intriguing.

The boat we saw pictured on the website looked pretty good, but the boat we actually took was entirely different. There was a wooden bench along each side of the narrow boat for people to sit on, which was  uncomfortable for the fourteen hours the trip actually took, and the boat was quite overcrowded. This shouldn’t have surprised us since the bus to pick us up was late, beyond overcrowded, and there wasn’t enough room for everyone’s luggage. In the end someone on a motorbike had to take the leftover pieces, and yes, it was quite a sight. 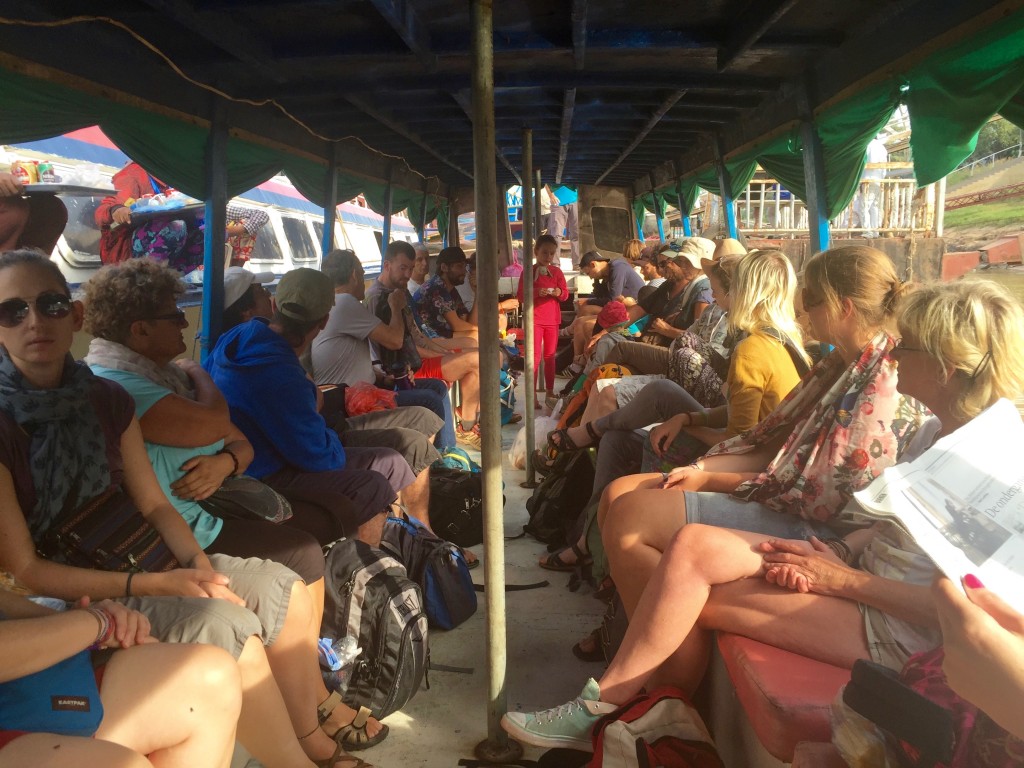 However, the trip down the river was more than enlightening. We saw village after village with buildings ranging from substantial temples and bamboo houses to nothing more than platforms with poles and plastic tarps, and everything in between. 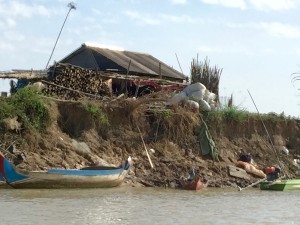 There were gardens and fish traps along the river, people fishing from boats, and boats just moving people and things from place to place. The overall impression of life on the river went back and forth between living in nature (a phrase one of our guides frequently used to describe village life), and extreme poverty. 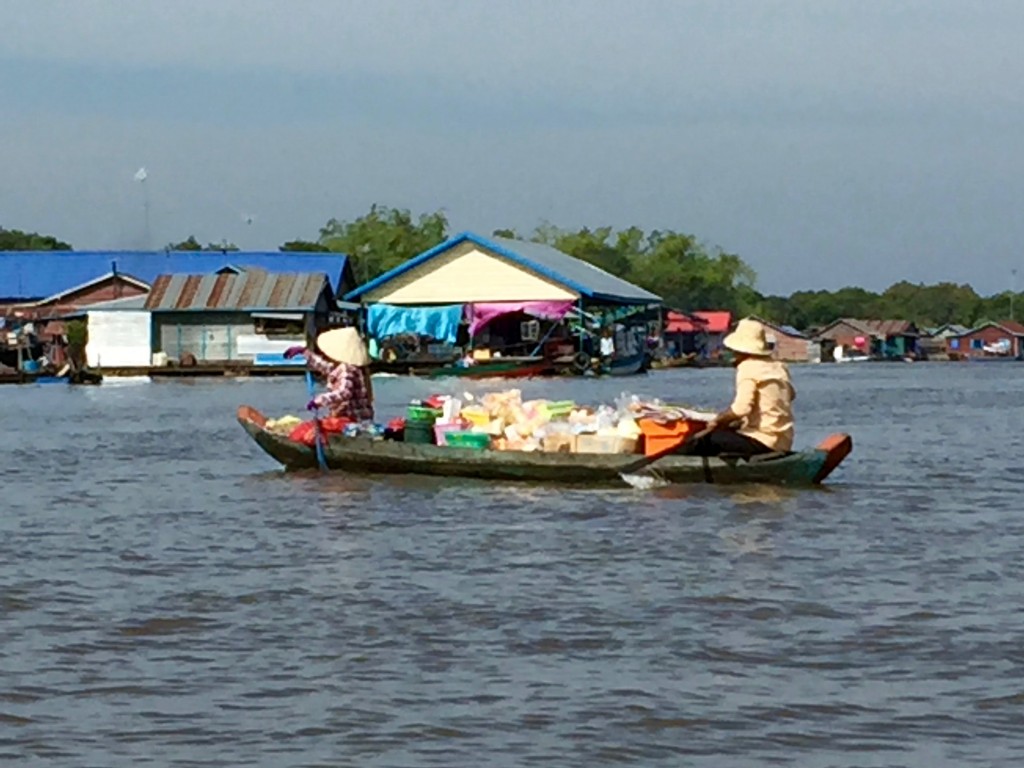 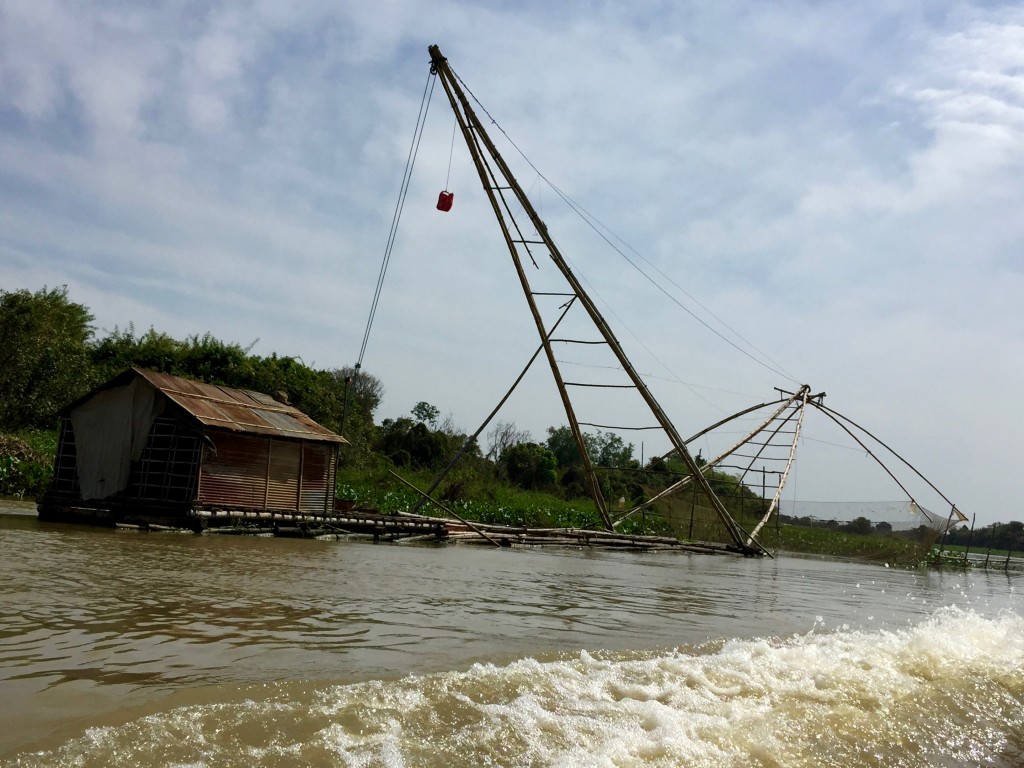 An interesting (I think) fish trap

Since our boat wasn’t tourist boat per se, a few times, as we got to a village, a motorboat would pull up and local passengers would climb into our boat. This was our first introduction to how the rivers of Southeast Asia are both a transportation network and a source of food and water — and the lifeblood of a country. 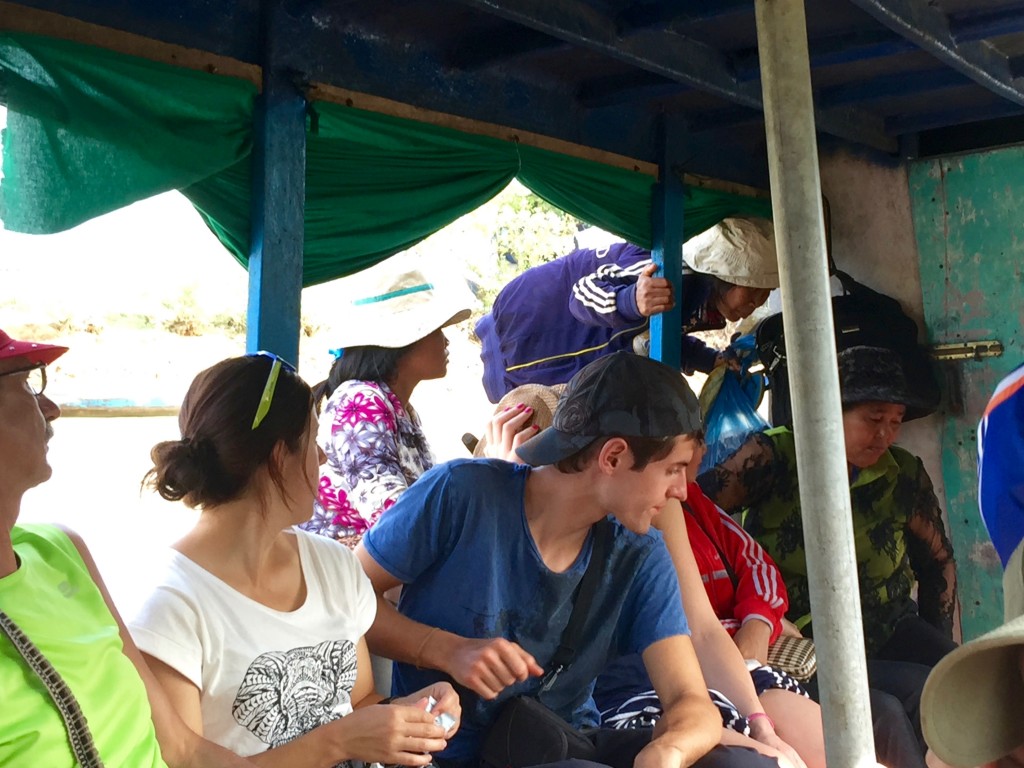 The boats themselves were interesting — they were powered by outboard motors whose propellers and rudders could be lowered or raised depending on the river conditions. On our trip we had no problems, but during the dry season larger boats like ours could get stuck for indeterminate lengths of time, or couldn’t make the trip at all because the water level was too low, leaving it to the smaller boats.

It turns out, as is often the case, both the negative and positive reviews were accurate — they were just from different points of view. It was one of those things that we were really glad we did, and equally glad we don’t ever have to do again.

In Battambang, a chance encounter led to another chance encounter that led to being picked up by a tuk-tuk at 7:30 a.m. one Saturday morning, and a trip to a village only 6 kilometers outside of Battambang, that might as well have been 1,000. We were going to shop at a local market — since there is no refrigeration it’s a market that is used by the villagers daily, with mostly food and not just souvenirs or watch and sunglass knockoffs — and then make food in the traditional way and learn about village life with a Khmer family. The experience dramatically changed our understanding of Cambodia again, or more accurately, created an understanding of Cambodia we hadn’t had before. 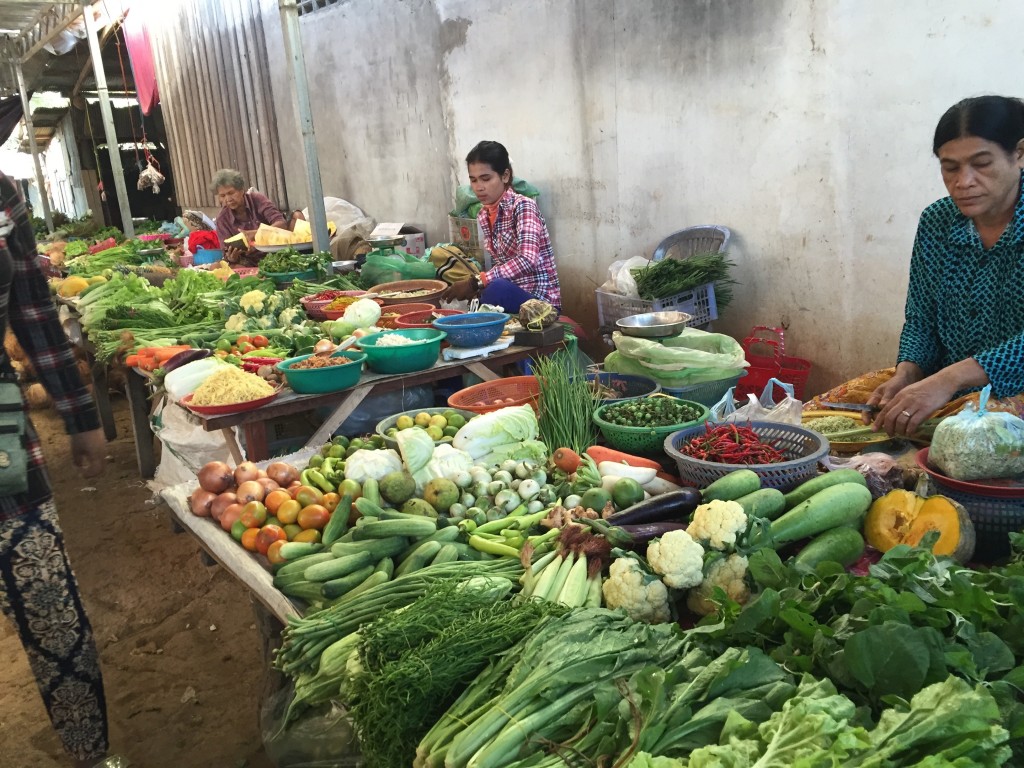 Our hosts were Phin and Lumorng, and this was the Bos Po Village Experience. They teach children English in Battambang during the week, and host people like us on the weekends.

We did go with Lumorng to the market to pick out food for lunch. We were supposed to help cook, but instead, her brother did most of the cooking. He had gotten ill in Thailand and was home recuperating, and she wanted him to get part of the money that we gave them, so Linda and Lumorng just talked. I ended up getting one of the best haircuts I have ever gotten, and shave from Lumorng’s brother-in-law (the tuk-tuk driver was her other brother-in-law).

Over lunch the discussion turned to life in their Khmer village. When the youngest daughter marries, she is expected to stay with her parents to help and support them, and her husband moves in with her, creating an extended, communal family. This traditional family not only keeps centuries of tradition alive, but given a Cambodian economy that is still recovering from the devastation wrought by the Khmer Rouge 40 years ago, is an economic necessity.

But even with its recovery so far, finding work in Cambodia can still be difficult, and often people end up working in Thailand or Vietnam, leaving their kids with the extended family and sending money back home to help support them. They may see their children once a year, at best. One of the saddest stories Lumorng told us was about an incident where a young woman was killed, and the village response, besides grief and sorrow, was a real concern with what will happen to her family after the loss of her income — it is a world where every penny counts.

But even worse, the poverty in Cambodia indirectly enables the sex trade. The story goes like this: Rice is the main crop for farmers in Cambodia, both to feed their families and to sell to have money for necessities. Each year a farmer has to borrow money from the micro-finance lenders (who, as opposed to banks, offer interest-only loans) to pay for the expenses of planting the crop, putting up their land as collateral. How much they get for their rice is a complex process rift with corruption. But no matter what, they have to repay the lender. If they haven’t gotten enough money for the rice, or even sold it at all, the lender can take their land, and the family will sink even deeper into poverty. Their only other choice is to sell a child to the representative of a sex trade ring in Thailand who visits villages like hers regularly. And while we Westerners, with our comfortable homes and enough to eat, find that horrifying and morally reprehensible — that a parent would sell a child — to a poor Khmer family it is literally a question of the survival of the rest of the family.

But despite the past atrocities of the Khmer Rouge (Lumorng’s parents lived through it and we did learn a little of their story) and the current economy, the family we met was warm and loving and made us feel right at home. Some of the family members are working in Thailand, and their children are not simply taken care of but have become everyone’s children. 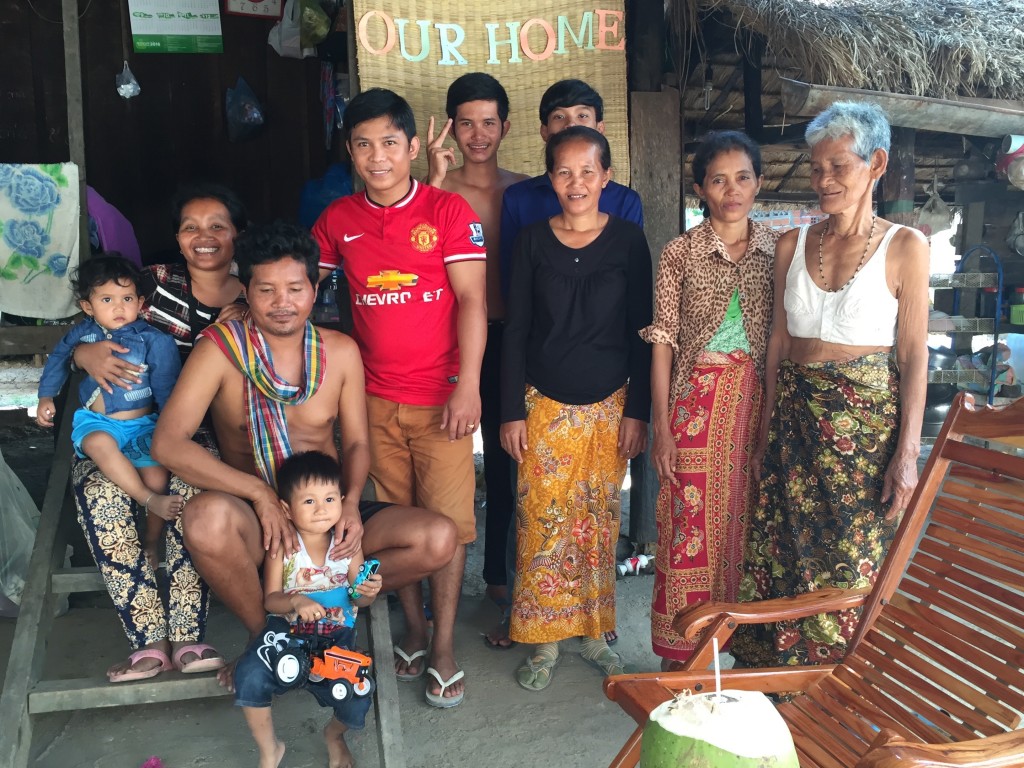 But more importantly, Cambodians are working hard to escape poverty. We were told over and over again that learning English is an important way out of poverty, and Phin and Lumorng teach English in the village after work. If the families have no money to pay for the lessons, they teach them for free (Cambodia has free schools but to get a really good education requires paying for a private school or a tutor, especially to learn English).

This was one of the most moving experiences we have had so far on our trip and one that will stay with us forever.

The first of the chance encounters that led us to Phin and Lumorng happened as we sat by the pool in Battambang. I noticed a woman was starting to read a book I had just finished (The Martian) and I told her how much I enjoyed it. She (Jenny) and her husband (Garth) and Linda and I started talking. One thing led to another, and she told us about what she was doing in Battambang.

She is a retired school teacher and reading expert who had developed a reading program in Canada. Some friends of hers thought it would be great for the kids in Cambodia. One thing led to another, and she donated it to a small school in Battambang and several other small village schools, and comes once a year to Battambang to teach teachers how to deliver the program to the children. She tailored the materials to make them less expensive for the Cambodian schools, and this year made 330 video lessons to help the teachers implement the program, and help the teachers and students with correct pronunciation (which is badly needed). Her work in teaching English is helping the Khmer create escape routes from poverty.

Unfortunately, they were leaving Battambang a few days later, and we didn’t have much time to talk with them. Then we had the second chance encounter. Amgad and Jan were helping them get ready to leave (they are the friends who introduced Jenny to Cambodia) and we started talking with them.

Several years ago they had come to Battambang for two days because their nephew and his wife were here and wanted them to visit their city — and they fell in love with the people (as we have). Their niece was working at a school, and the school invited them to come back and help develop the staff’s professional capacity. Over the years, Amgad and Jan have expanded their educational support work and helped establish social enterprises such as Cambodia Tours For Education (to provide direct tourist resources to locals and build capacity in tourism so Cambodians themselves can operate the tours in Cambodia), and the Bos Po Village Experience (which we went to), to help Cambodians make a living in their communities instead of having to go to Thailand or Vietnam to work.

It was because of Amgad’s enthusiasm and passion that we ended up at the Bos Po Village Experience, and meet Phin and Lumorng (who were teaching at the school that Amgad’s and Jan’s niece was working at) and their family.

As we had hoped when we started our trip, all we had to do was listen quietly wherever we were, and what to do and see would slowly unfold.