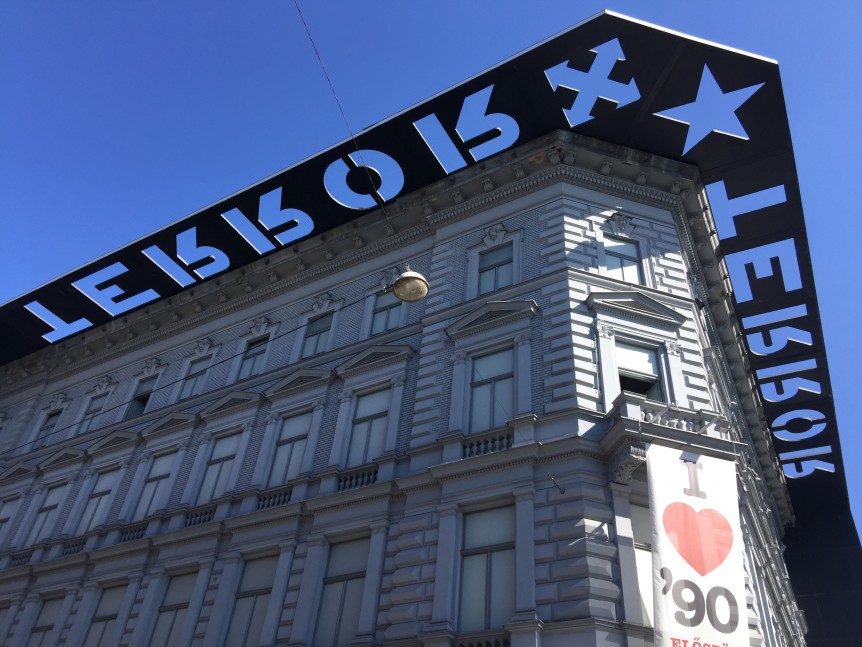 In Poland and in the Czech Republic you can’t escape WW II and the Holocaust, and to a lesser extent, what went on during the Soviet occupation. While the former series of events segued into the latter, the two are thought of as distinct.

In Hungary however, the Nazi and Soviet occupations are thought of as a single chapter in Hungary’s history and shapes the conversation about national identity.

The first stop on our self created tour of brutality and repression (the time from the Nazi invasion in March, 1944 until the fall of the iron curtain in March, 1990) was the House of Terror in Budapest. And while the name sounds like an amusement park attraction, it is far from that — the name alone indicating what those times were like.

The museum exhibits describe WW II, the Nazi occupation, the Soviet occupation, and the 1956 revolution — the events that shaped modern Hungary, and is also a memorial to the victims of those detained, interrogated, tortured, or killed in this building. It also contains exhibits on Hungarian organizations such as the fascist Arrow Cross Party and the communist ÁVH (which was similar to the Soviet Union KGB secret police).

Appropriately, the museum is the former headquarters of both the Nazi and Communist secret police. If you look up at the building’s awning, you can see the word TERROR cut out of it, and when the sun shines, TERROR is projected onto the sidewalk below, symbolizing the fifty years of terror projected onto the Hungarian people.

During World War II, Hungary sided with the Nazis, and Hungarian forces participated in the invasions of both Yugoslavia and the Soviet Union. While fighting against the Soviet Union, Hungary engaged in armistice negotiations with the United States and the United Kingdom. Hitler discovered this betrayal and in March, 1944, German forces occupied Hungary. When Soviet forces began threatening Hungary, an armistice was signed between Hungary and the USSR by Regent Miklós Horthy. To deal with that, German commandos kidnapped, Horthy’s son and threatened to kill him unless Horthy revoked the armistice and name the leader of the Arrow Cross Party, Ferenc Szálasi, as Prime Minister. Horthy did as he was told, and Szálasi, as the Prime minister, established a new government with German backing. 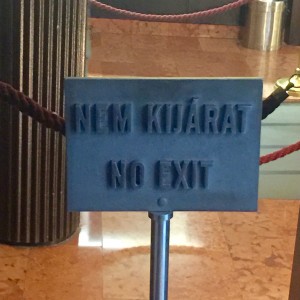 When the Communists moved into Hungary, they took over the building (this building) that had housed the Gestapo as headquarters for their secret police (the ÁVO, later renamed ÁVH). To keep dissension to a minimum, the secret police terrorized, tried, deported, or executed anyone suspected of being an enemy of the state.

One of the most chilling parts of the exhibit is the trip on the elevator to the basement where you can see examples of the cells that the ÁVH used to house, question, and torture prisoners. On the trip down there is a three-minute video of a guard explaining the execution process.

Our second stop was the Hospital in the Rock Nuclear Bunker Museum. It is part of an approximately 6-mile (10-km) stretch of interconnected caves and cellars beneath Buda Castle Hill. This museum is dedicated to the hospital, used actively during WW II until July 1945 and then during the 1956 Revolution to treat wounded civilians and soldiers. In 1958 (and until 1962) it was declared top secret and expanded by the Communist government to withstand potential chemical and nuclear attacks during the Cold War.

The final stop of our tour was Memento Park, an open-air museum dedicated to monumental statues from Hungary’s Communist period (1949–1989). There are statues of Lenin, Marx, and Engels, as well as several Hungarian Communist leaders. The park was designed by Hungarian architect Ákos Eleőd. 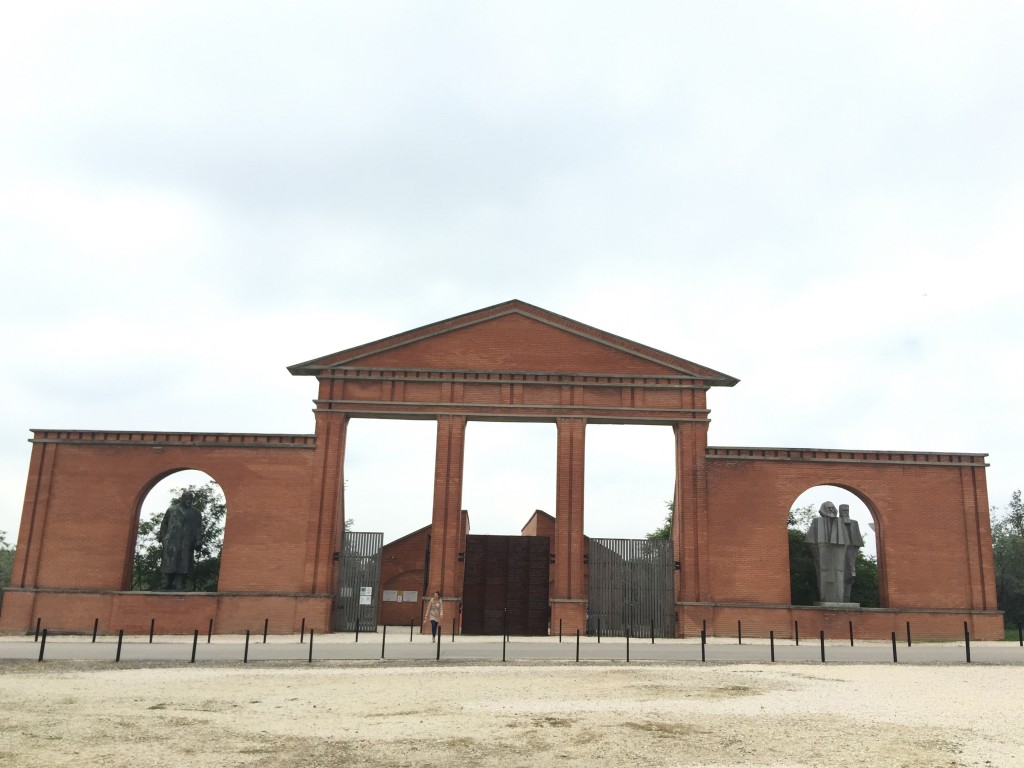 The gateway to history

While it is easy to think about it as such, the park is not a trip down irony lane. According to the Park materials, it is “a conceptual work of art by architect Ákos Eleőd and is both a reconstruction and a symbolic rendering of the atmosphere of dictatorship.”

An interesting touch at the front of the park is that you can’t get in through the main gate, you have to go around the side. There is also nothing behind that massive main gate. Both of these are the architect’s comments on day-to-day life under the Communist regime.

Memento Park is divided into two sections: Statue Park, which contains 42 statutes that were removed from Budapest after the Russian occupation was over. It is named “A Sentence About Tyranny” Park after a poem of the same name by Gyula Ilyés. The second section, Witness Square (also called “Neverwas Square”) holds a replica of Stalin’s Boots. This was a symbol of the 1956 Hungarian Revolution when the statue of Stalin was pulled down from its pedestal. 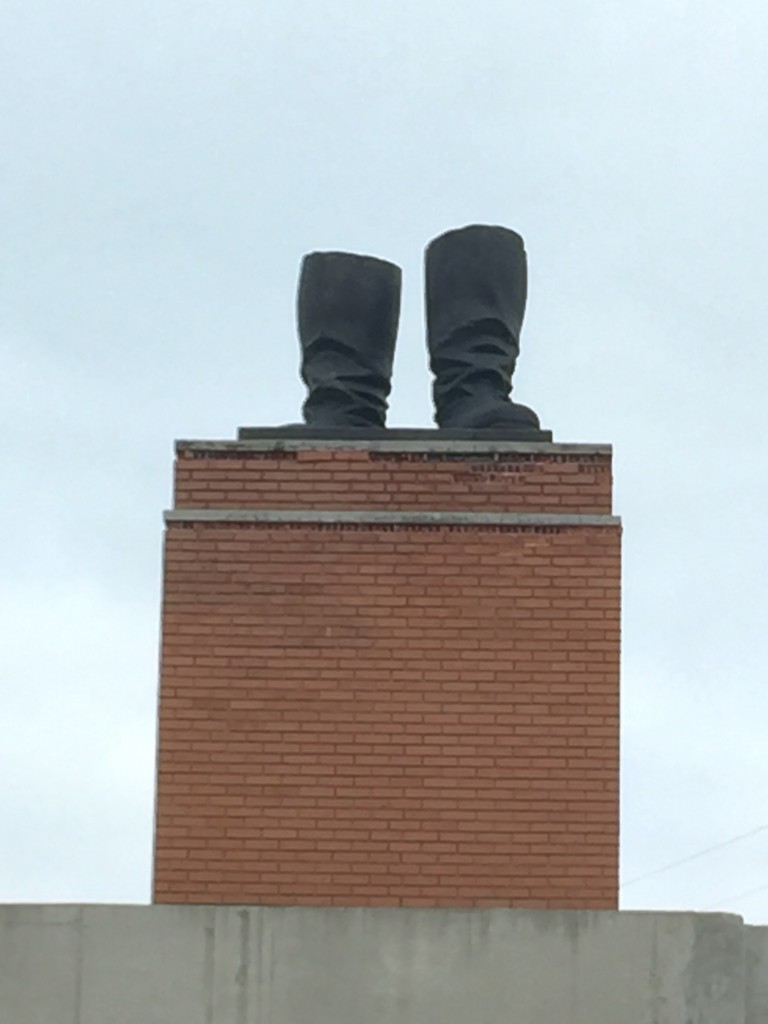 You can see my photographs of the park here. 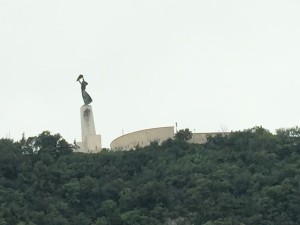 There is only one remaining statue within the main city of Budapest from the Soviet period, although it was altered from the original —The Liberty Lady atop Géllert Hill. Additionally the original inscription, “To the memory of the liberating Soviet heroes [erected by] the grateful Hungarian people [in] 1945”. was modified to read: “To the memory of those all who sacrificed their lives for the independence, freedom, and prosperity of Hungary.”

Our tour guide told us that when all the other communist statues were removed after 1989, the Hungarians covered The Liberty Lady in a white sheet for three days to purify her before re-introducing her to Budapest.

I couldn’t find any verification for this, but it is a lovely story anyway, and the statue is beautiful.

Besides the museums, there are also monuments to the victims of the brutality. There were two that I found particularly moving. 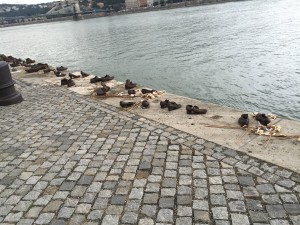 Shoes on the Danube Embankment

Film director Can Togay and sculptor Gyula Pauer have created a memorial to Nazi atrocities in front of the Parliament building on the edge of the Danube. It consists of 60 pairs of rusted period shoes cast out of iron. The Arrow Cross would line up victims at the embankment, have them strip naked, and then would shoot them in the back, execution-style, and have them fall into the river to be washed away. The different sizes and styles of shoes reflect how nobody was spared from the brutality of the Arrow Cross militia. 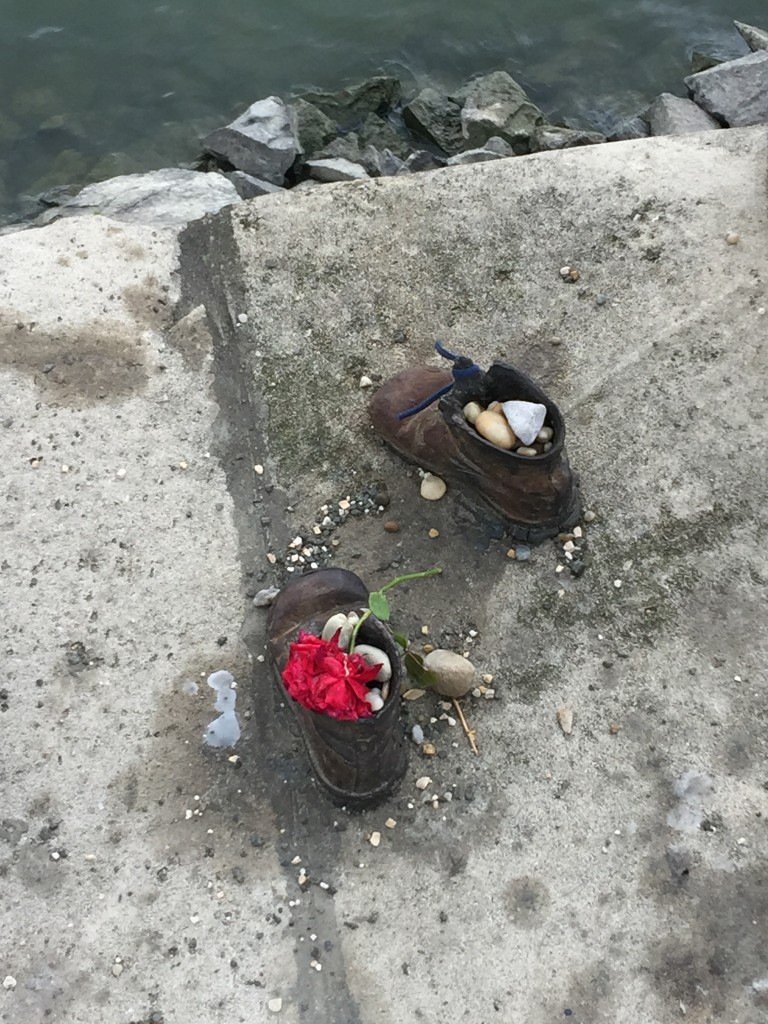 No one was spared

The Raul Wallenberg Memorial Park, located at the Great Synagogue, is The Holocaust Memorial, also known as the Emanuel Tree — a weeping willow tree (by Imre Varga) with the names of Hungarian Jews killed during the Holocaust inscribed on each leaf. 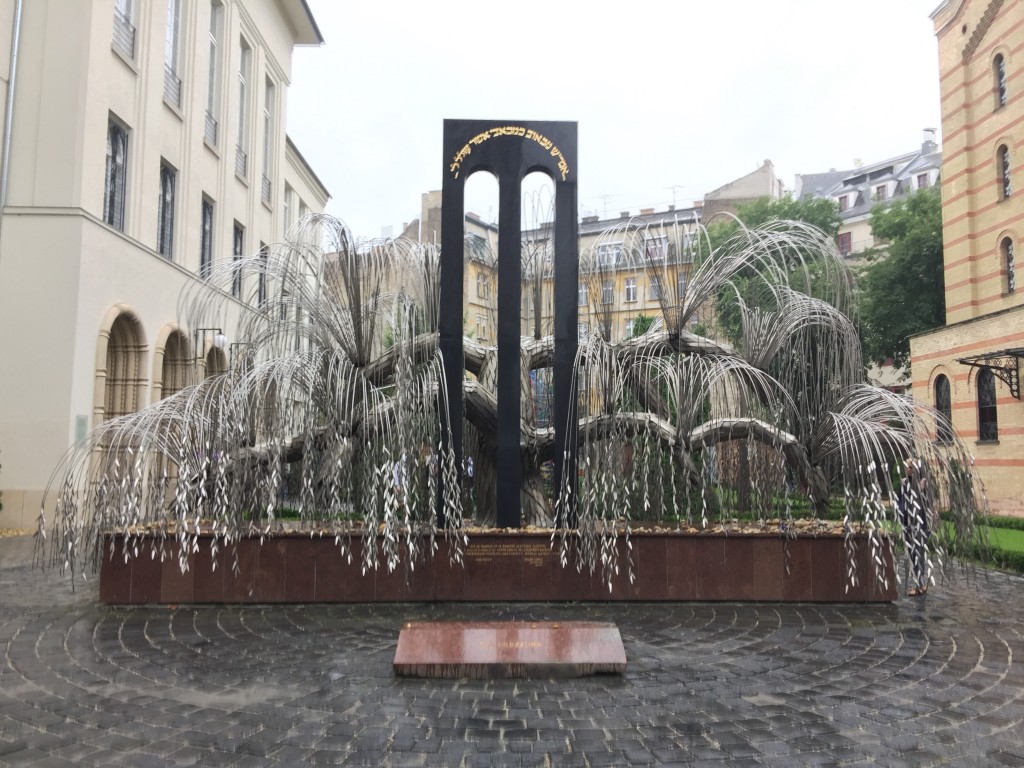 Rereading this post, I realize it paints a rather bleak picture of Budapest, but it was only one small, albeit significant, part of our visit. We had a great time in Budapest, including a trip to the Széchenyi Thermal Bath, and lots of really good ice cream.