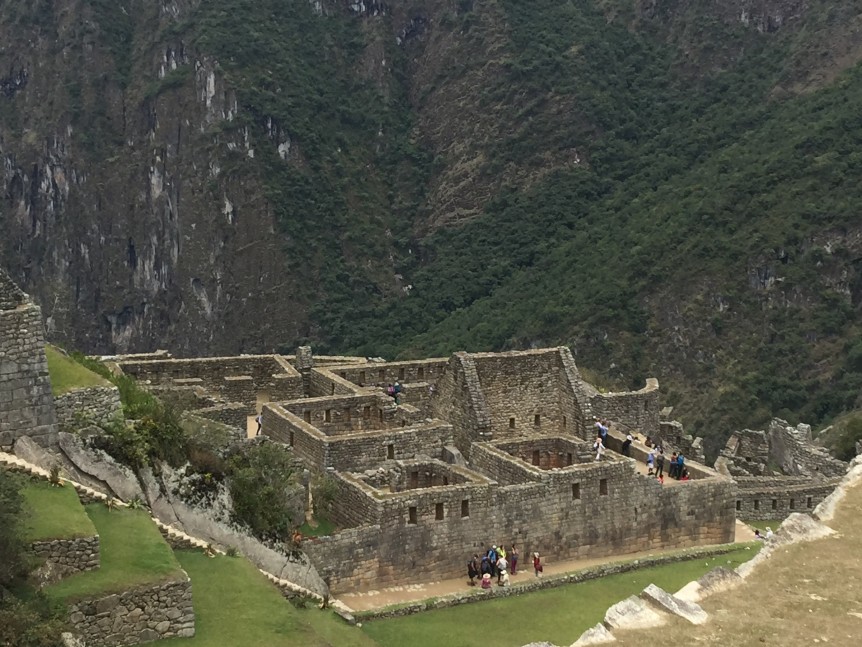 I must have been one of the few people on the planet that did not have Machu Picchu on a bucket list some place. To start with, I don’t have a bucket list (why is a long story), and what’s more, the reason for us to go to Peru was not to simply see Machu Picchu, but to explore what seemed to be a fascinating place.

My warm, but not hot, attitude toward Machu Picchu came from a combination of the cult-like atmosphere generated by Inca (and especially Machu Picchu) devotees, the crowds (of selfie taking tourists), and the potential for a theme park atmosphere. It’s not that I didn’t want to go there, it was just that it wasn’t the number one reason for me to go to Peru.

Now, however, it turns out that it was a good thing that we went when we did. During our visit we were free to wander throughout the site, but just recently Machu Picchu was added to UNESCO’s list of endangered sites, and new measures encouraged by UNESCO, at some point, will restrict the flow of tourists through three pre-determined routes on guided tours limited to 20 people each. In 2014, some 1.2 million tourists visited Machu Picchu, way more than the daily limit of 2,500 agreed to by Peru and UNESCO.

As it turns out, I was half right about Peru. As you can read in previous posts, Peru is indeed more than Machu Picchu. Although one of the places I was excited about, I am embarrassed to admit, was Lima, which turned out to be memorable only for Museo Larco, the Huaca Huallamarca ruins, Plaza Mayor, Parque del Amor in Miraflores (inspired by Gaudi’s Parque Guell in Barcelona), and mostly for its car horns, car alarms, and the lack of heat in the Airbnb apartment we stayed in for a week.

But it turns out I was an idiot when it came to the Incas and Machu Picchu.

We got into Inca territory a couple of weeks into our trip, when I was already hooked on the Moche and Chimú civilizations. Before Peru, I must confess, climbing around ruins was not one of my favorite activities. But our trip to the North had completely changed my attitude.

You enter Machu Picchu from above, and all of my doubts evaporated along with the morning mist when I first saw it. It was exquisite, no, make that heart-stoppingly beautiful. And as we explored, the elegance of its design and construction rendered me speechless — it is a masterpiece. 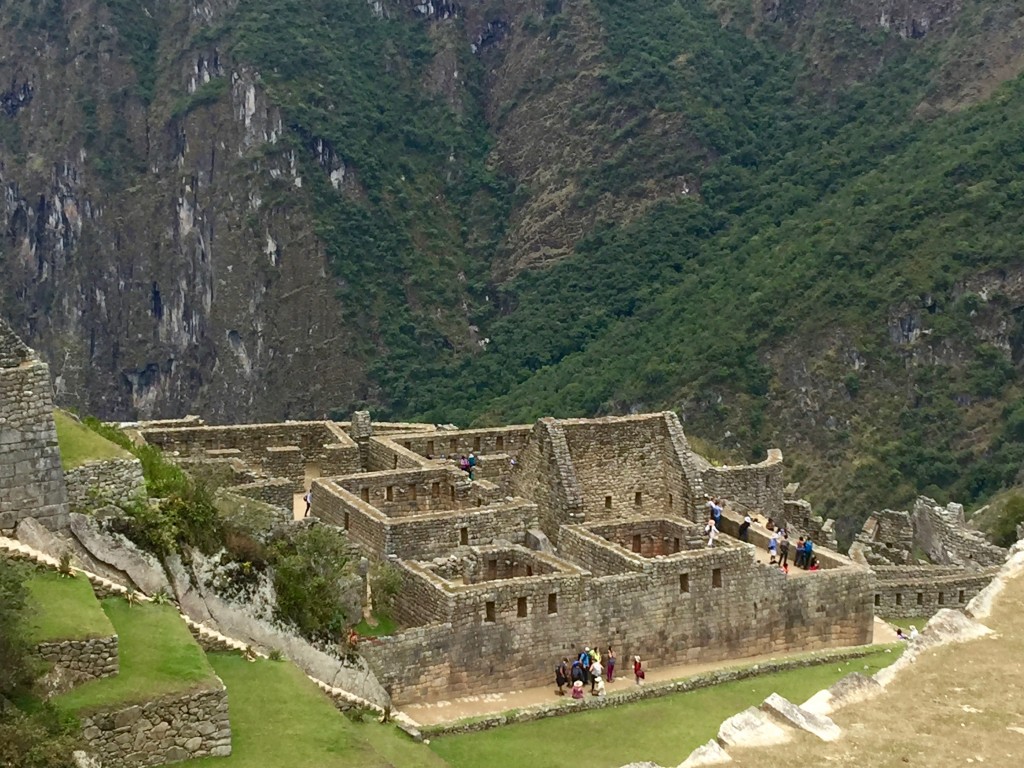 It is on a high ridge, 2,430 meters above sea-level, at the meeting point between the Peruvian Andes and the Amazon Basin, and surrounded on three sides by the Urubamba River 2,000 feet (610 meters) below. It is in a tropical mountain forest, actually a cloud forest, an extraordinarily beautiful setting at the base of Huayna Picchu (the towering mountain behind Machu Picchu that I would climb the next day) — a complex of palaces and plazas, temples and homes, terraces, and ramps that seem as if they had been cut naturally into the ridge, blending the city into the steep mountainous terrain.

The city is divided into a lower and upper part, separating the farming from residential areas, with a large square between the two. Cloud forests mean lots of rain, and the Incas layered the terraces with stone chips, sand, dirt and top soil, to drain rain water and prevent landslides, erosion, and flooding, and did the same thing in the city center to keep it from flooding. 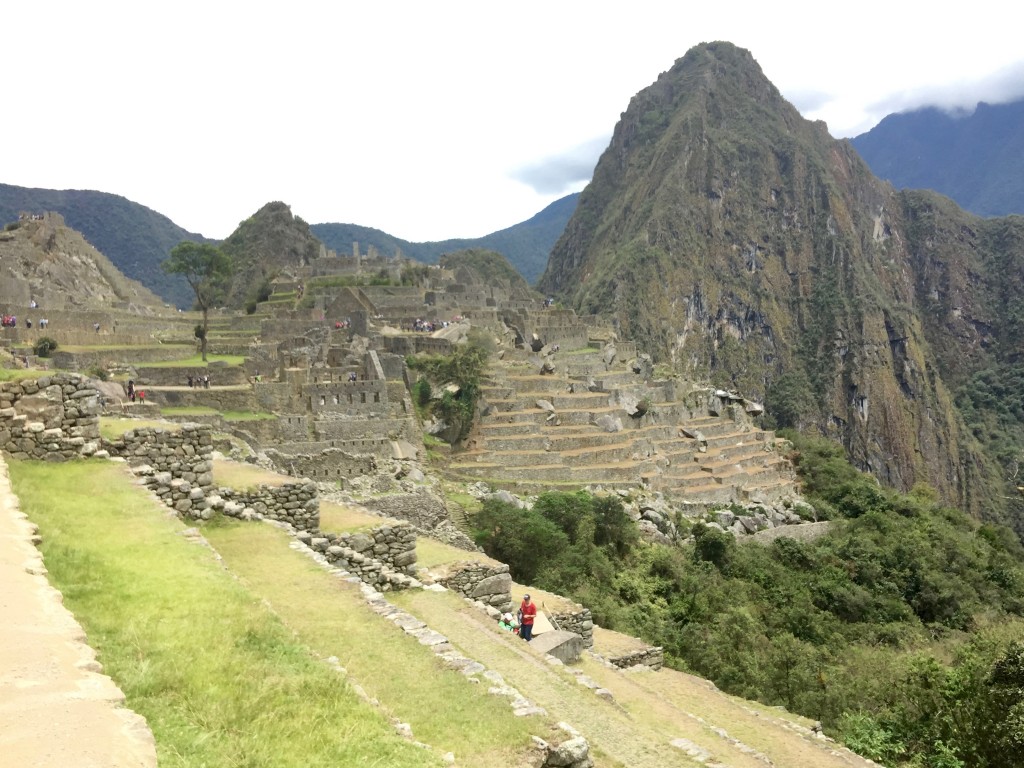 That the city is still intact 500 years later, makes you realize how good the Inca builders really were.

How well it is integrated into its environment — it follows the contours of the ridge and even incorporates boulders into the buildings — was one of the things, at least for me, that made Machu Picchu so elegant. When the Incas built The Temple of the Sun, for example, they incorporated a boulder that was already there into its foundation. 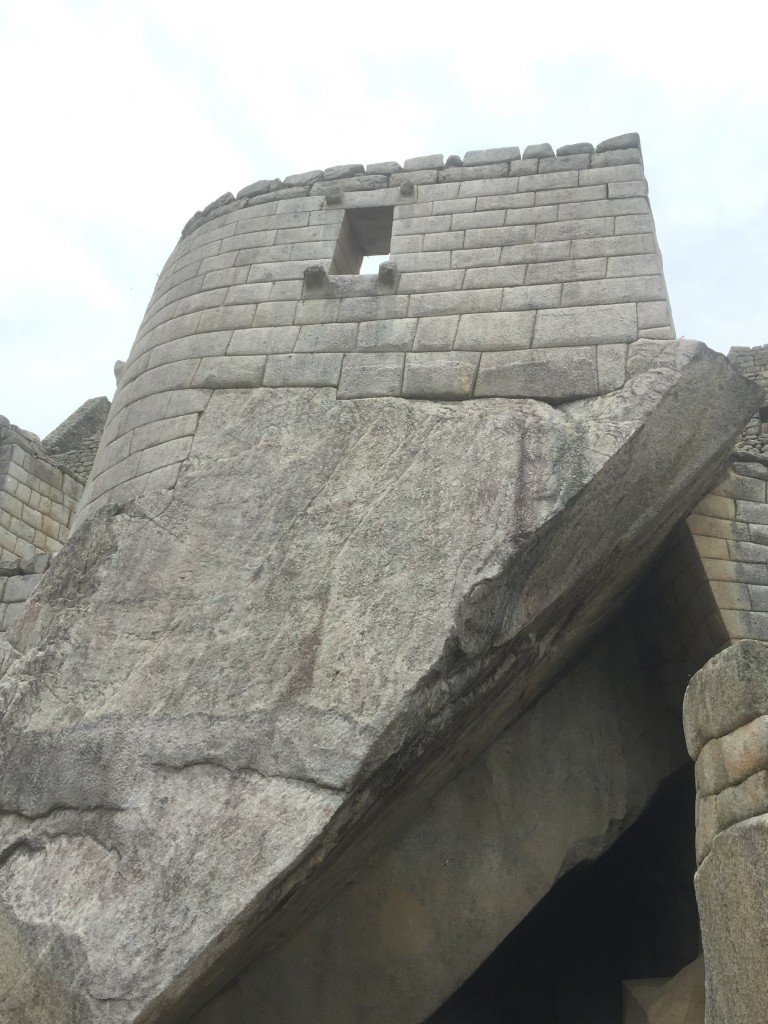 And sometimes the shape of a sacred stone or building was designed to be isomorphic with a natural feature such as a distant mountain. 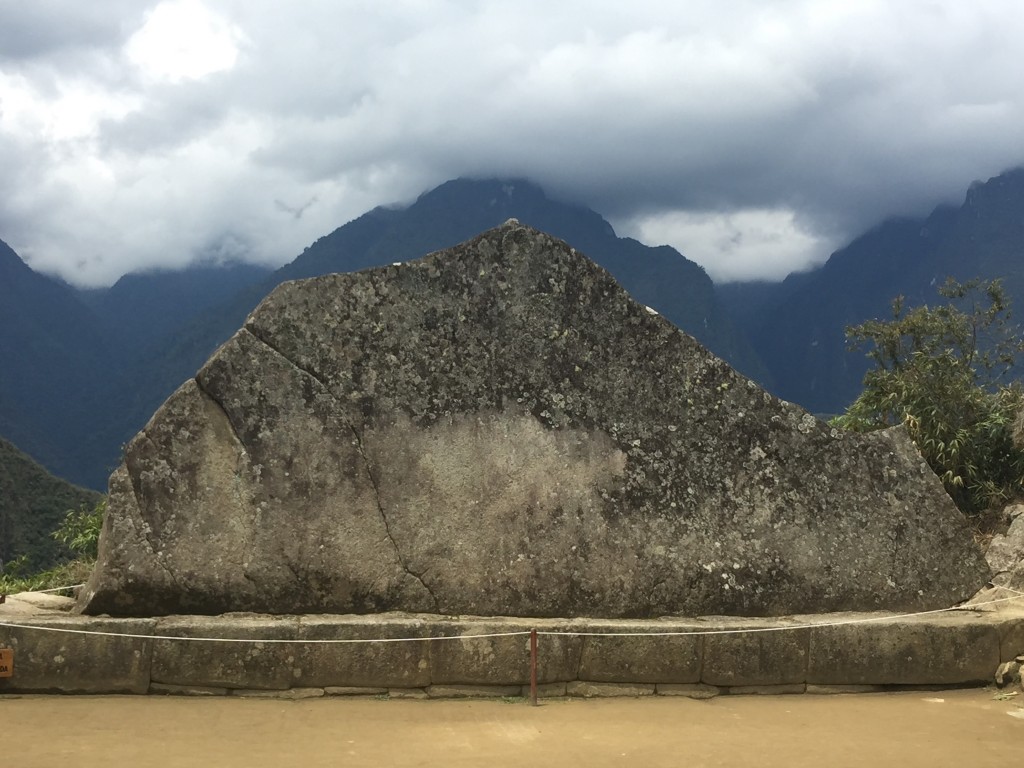 But to the Inca builders the environment was not just the earth, but the heavens as well. Archeologists believe (there is sometimes quite a bit of differing ideas and opinions here) that The Temple of the Sun, along with other structures, were constructed by the Inca engineers to also be used as solar observatories. Two windows appear to be related to the Summer and Winter solstices.

Below the Temple, the Inti Mach’ay cave, which appears to be designed and constructed to celebrate the Royal Feast of the Sun, has a window which is aligned to allow sunlight into the structure only during a few days of the December Solstice.

The Inti Watana (The Hitching Post of the Sun) is a stone in Machu Picchu that archeologists have pointed out (with even more differing ideas and opinions here) can be used to determine both the summer and winter solstices and the fall and spring equinoxes. 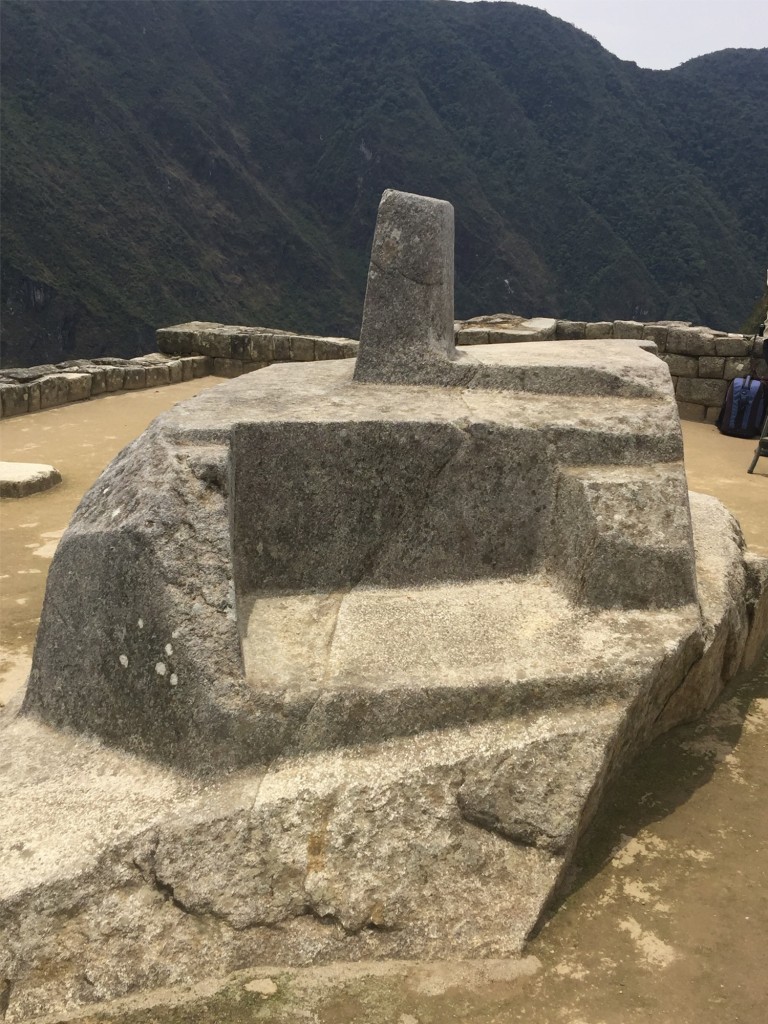 The Inti Watana (The Hitching Post of the Sun)

My turnaround, conversion, and descent into the magical world of the Incas and Machu Picchu began innocently enough. On the way to Colca Canyon, I became fascinated by the Inca terraces. I am not sure why, but I think it was the aesthetics of the engineering that grabbed me — an elegant way to not only transform a steep slope into farmland, but also to enable the Incas to take advantage of the different ecological zones at different altitudes. 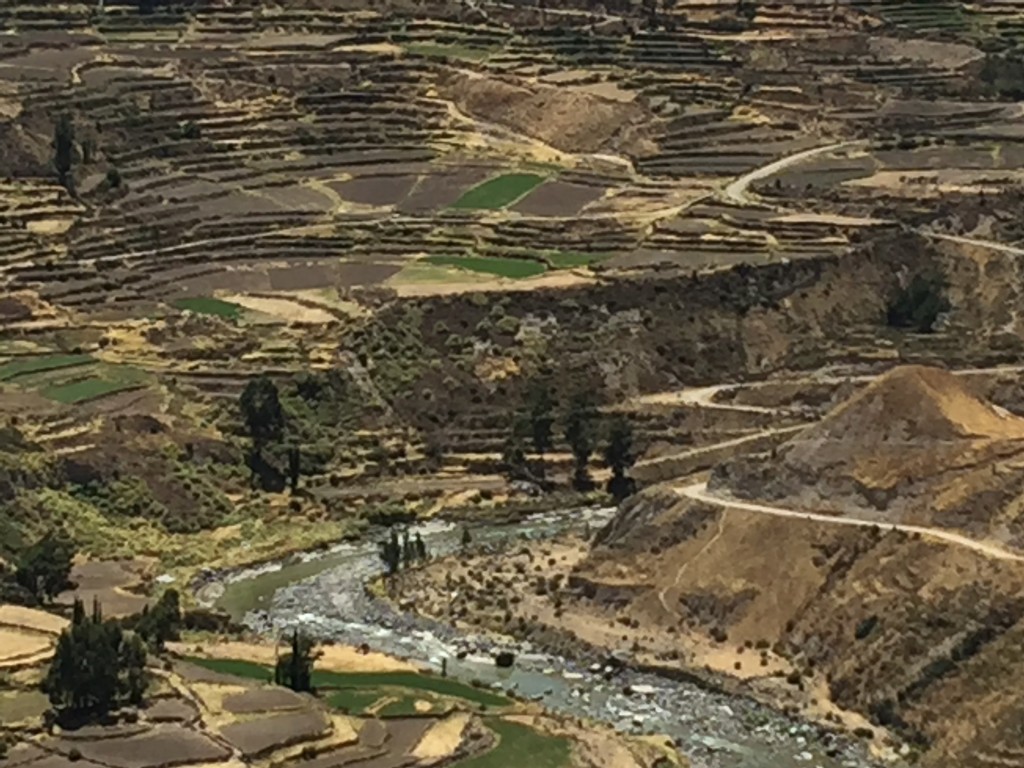 The terraces on the way to Colca Canyon

Even more beautifully constructed were the terraces of Pumatallis in Ollantaytambo, the royal estate of Emperor Pachacuti, who conquered the region and transformed the Kingdom of Cusco into the Inca Empire. The terrace walls here were made of cut and fitted stones instead of rough fieldstone. These walls were designed not only to protect the plant beds from the wind, but also to absorb solar radiation during the day, and when it was released during the night, create a microclimate zone 2 to 3°C warmer than the surrounding area where plants native to lower altitudes could be grown. 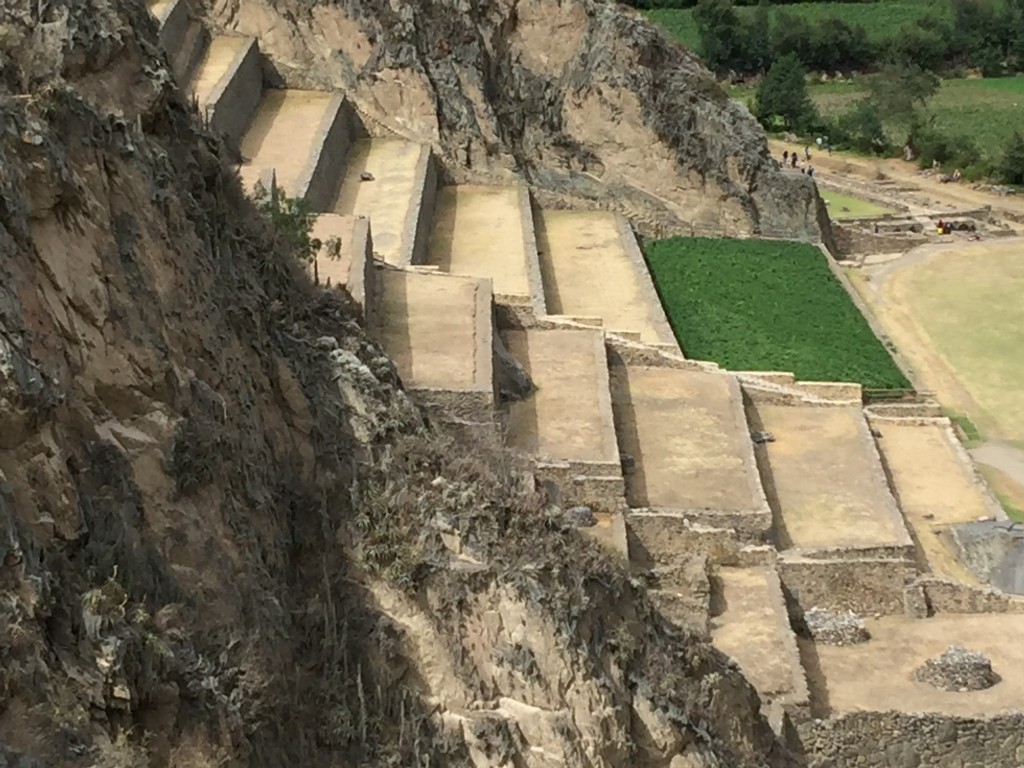 But it was the stone walls built by the Incas that sealed my fate — walls made of cut and shaped stones that fit together (without mortar) so perfectly that a single piece of paper would not fit between them. Walls made even more stable with trapezoidal doors and windows that tilted in from bottom to top by 3° to 5°, rather than being straight up and down, enabling them to withstand the earthquakes common to parts of Peru. 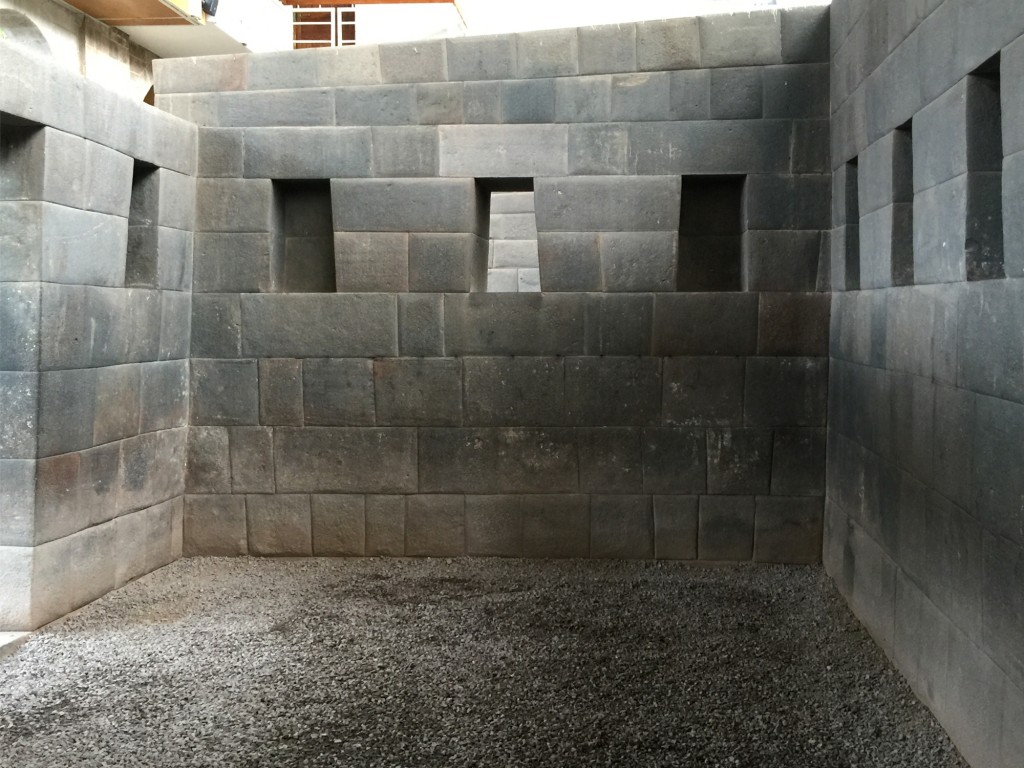 My fascination with the Inca walls started where our journey to Machu Picchu began — in Cusco, the historic capital of the Inca empire.

The Spanish colonists in Cusco built the Church of Santo Domingo after demolishing the Inca Qurikancha Temple and using its foundation for the church (one of many places where the Spanish incorporated Inca stonework into the structure of a colonial building). But when in 1950 an earthquake severely damaged Santo Domingo Cathedral, during the restoration work the stone walls built by the Incas were found still standing. 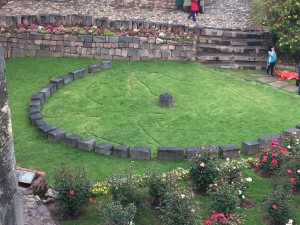 Built by the Spaniards

What was even more striking was the contrast between the walls constructed by the Spanish priests who built the cathedral, and a stunning work of art — an elegant curved wall built by the Incas at Qurikancha. 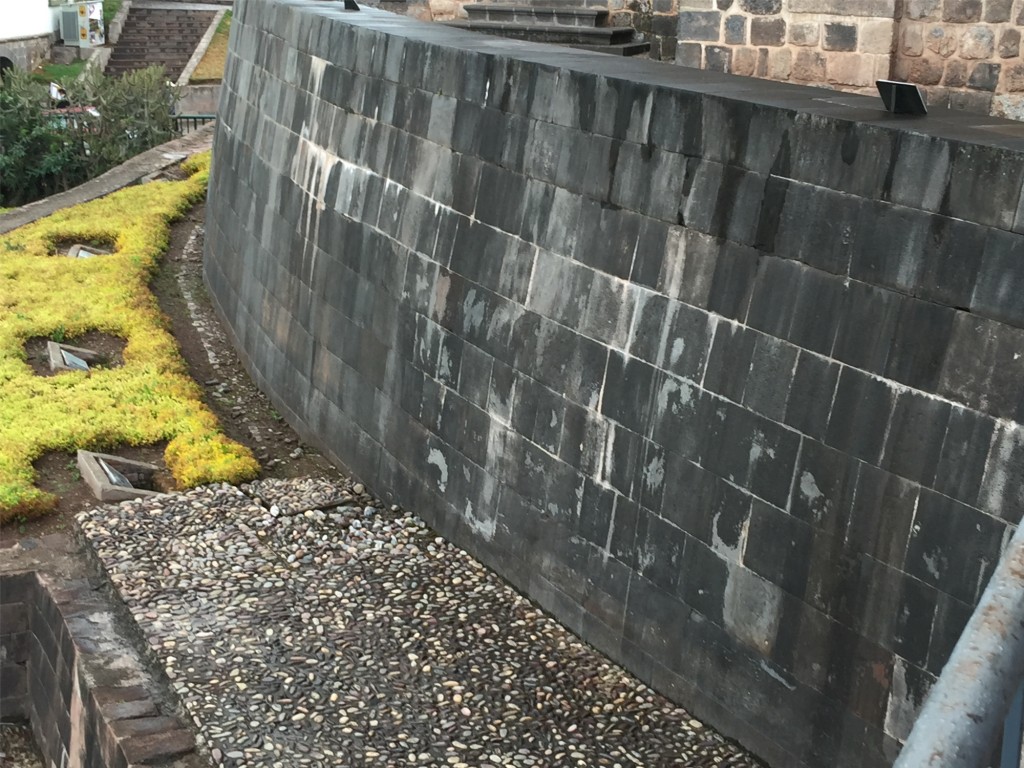 A wall built by the Incas

While the walls at Qurikancha were indeed astonishing, they were just a teaser for what we found at the fortress of Saksaywaman, a citadel on the northern outskirts of Cusco. The Incas here built dry stone walls constructed of huge stones (some weighing more than 128 tons), without using mortar, by carefully cutting the boulders so precisely that a single piece of paper will not fit between many of them. The longest of these walls is about 400 meters and about six meters tall. 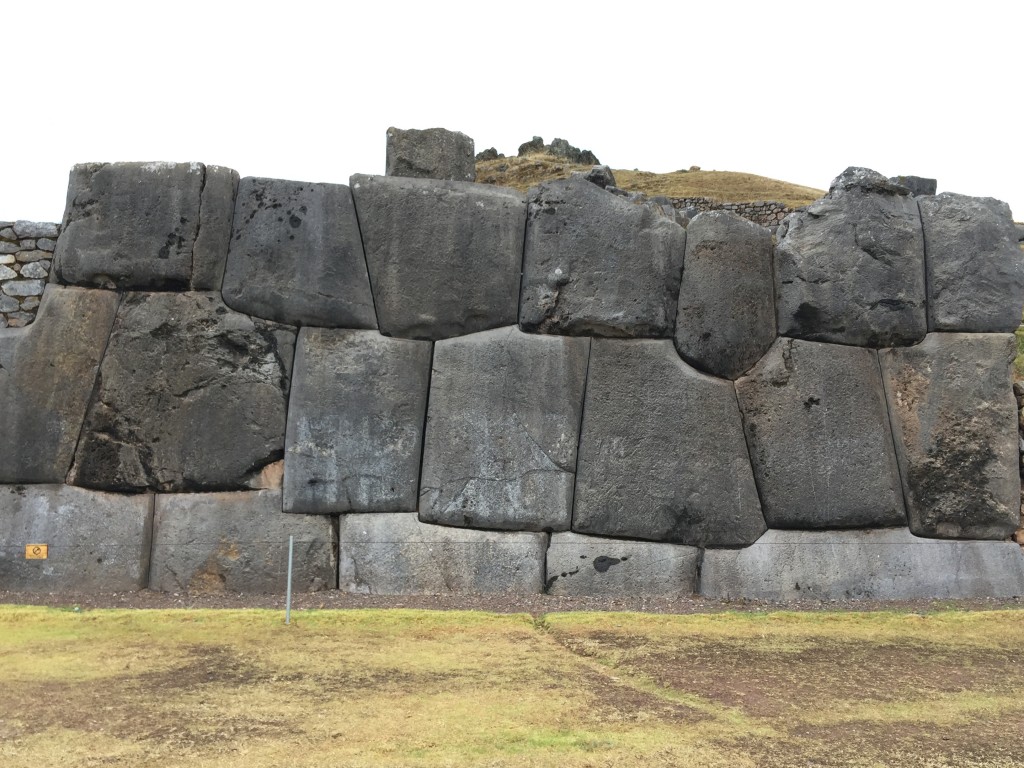 Seeing the bits and pieces of what the Incas could do before I got to Machu Picchu kept it from being completely overwhelming — enabling me to appreciate at a deeper level how it all came together there to create a masterpiece. A masterpiece made even more amazing by the fact that it was created without the use of a written language, iron or steel, or the wheel.

I took quite a few photographs of Machu Picchu, but as you might expect, they don’t even come close to capturing the essence of what I saw and experienced. But then again, most of the photos taken by the professionals don’t do that either. But my photos do anchor my experience back to that mountain valley in Peru and the sense of awe I felt as I walked through the gates of Machu Picchu for the first time, and looked down at the wonder that lay before me.