We really liked Kraków. And although we really liked Warsaw too (there is major rivalry here), they are very different — similar to the difference between New York and San Francisco. Warsaw is a big city with an urban feel, and really spread out. Kraków is more compact and easier to get around, more like a big small town.

But the fact that most of the “places of interest” in Kraków are concentrated in three areas — Old Town, the Jewish District (Kazimierz), and the Podgórze District — also makes it more like a Disneyland, filled with people with maps and guidebooks wandering around looking for whatever they came to find. Although, as we came to discover, there is a lot more to Kraków.

Old Town, with its Main Market Square (one of the biggest squares in Europe) is much more the tourist area, providing opportunities to buy over priced souvenirs made in China, ride in horse-drawn carriages, and eat and drink in over priced pubs and restaurants. Yet it still has some magnificent buildings and some great treasures. It is a UNESCO World Heritage Site and still has the original medieval form. 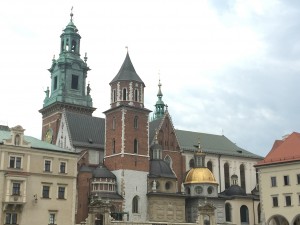 In Old Town we found St. Mary’s Church, Town Hall Tower, the Cloth Hall, and lots of shops, and on the Internet there is no end of top ten lists to explore, so there is no need for me to add yet another. But one of the more interesting things is to listen and watch a bugler play the Hejnał (a five-note Polish anthem), which is played each hour from the highest tower of St. Mary’s Church, and which stops abruptly before the end (after many tries I finally saw the bugler on the last day).

According to a popular 20th-century legend, during a Mongol invasion of Poland a sentry on a tower of St. Mary’s Church who sounded the alarm by playing the Hejnał, was shot in the throat and did not complete the anthem — the legendary reason why performances end abruptly before completion.

After being a little disorganized and scattered in Warsaw, we finally began to get our “sea legs”. We started with a free walking tour of Old Town (I can’t recommend freewalkingtour.com highly enough). I find being on foot the best way to learn a city, and the tour guides are full of very useful information (how public transportation works for example).

We stayed in Kazimierz, which is much less intense and much more interesting.

It is a historical district of Kraków, originally an independent city, just south of Kraków Old Town. For many centuries, Kazimierz was a place of coexistence of Christian and Jewish cultures with its north-eastern part historically Jewish,

Through a friend of a friend we were introduced to a Rabbi  (the first female Rabbi in Poland ) and one of her board members who showed us around Kazimierz.

We didn’t come to Poland to document the Jewish experience, but what we learned is that to begin to understand contemporary Poland you can’t ignore it. Before World War II Jews made up 10% of the Polish population, and for a thousand years made a significant contribution to Polish culture. 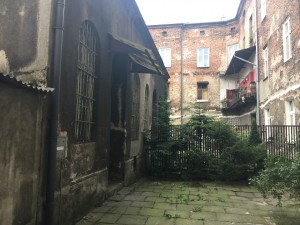 One of the things that fascinated me for some reason was an enclosed courtyard that contained a former synagogue (now not  being used). What makes is so interesting to me is not that it is about Polish Jews, but that it was a community within a community within a community and illustrates the richness and complexity of a culture. You can still sense the spirit of the people who lived here, as if it had seeped into the stones of the old building.

Yet with all the richness of Jewish culture we found in Kazimierz,  there were almost no Jews there. After the war, and after Communism made life increasingly difficult for the few Jews that remained in Poland, there are now only about 25,000 Jews in Poland and handful in Kazimierz. But things seem to be changing in Poland as a whole and in Kazimierz as well. We were told repeatedly that there are many Poles with Jewish roots (the result of many Jews who went into hiding to escape the Holocaust), and more and more Poles are discovering and exploring them.

We also took the Jewish Kraków tour with Free Walking Tours, which included Kazimierz and Podgórze  and learned a lot more about Jews in Kraków. 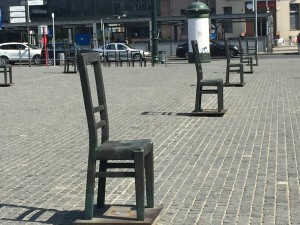 In 1941 the Nazis relocated the Jews in Kraków into the Kraków ghetto in Podgórze, just across the river from Kazimierz. Today it contains the new Schindler’s Factory museum and Ghetto Hero’s Square, which is filled with sculptures of empty chairs, symbolic of the furniture the Jews had to carry with them from their homes to the ghetto, which they had to leave because there was no room for it in the already over crowed apartments they had to move into in the ghetto . The ghetto was demolished by the Nazis in 1943, but you can still see the (restored) Pharmacy Under an Eagle that was run by a Pole during World War II and provided a cover for the Polish resistance that tried to help Jews in the ghetto and kept residents alive by distributing medication, as well as tranquilizers to help keep hidden children quiet during Gestapo raids. It also had a hidden vault that preserved Torahs and other Jewish items.

While I had learned a lot about the impact of WW II on Poland, I didn’t really have a sense of the impact of Communism, so I took the Free Walking Tour’s Communist Kraków Tour (this one was not free). 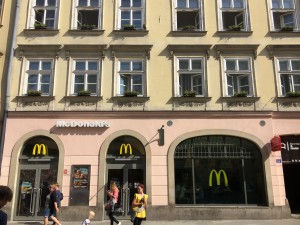 Starting a restaurant revolution in Krakow

At the end of the Communist era there were only 10 restaurants in Kraków, so we started with one of the first of a new breed of restaurants, McDonalds, where people would stand in line for hours and hours for the opportunity to buy a Big Mac. 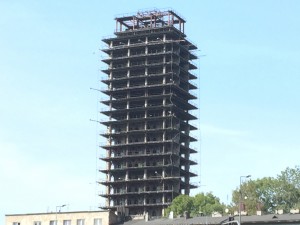 We then got on the tram to Nowa Huta  and caught a glimpse of what the people of Kraków call the “Szkieletor” because of its resemblance to a skeleton (allegedly named after Skeletor, the arch-villain in He-Man and the Masters of the Universe, a cartoon popular in Poland at that time). It was started in the heyday of the Edward Gierek decade in Communist Poland. The concrete shell was erected in 1975, but the building was never finished because of economic constraints and political unrest leading to the imposition of martial law in Poland in 1981.

After WW II middle-class Krakowianins resisted the new Communist regime. In 1949 with a “we’ll-show-you-middle-class-Kraków” attitude, the authorities started building an industrial town to attract peasants and the working class to the region to “correct the class imbalance”. It was supposed to be a center of heavy industry and a showcase for the Communist idea of a workers paradise. 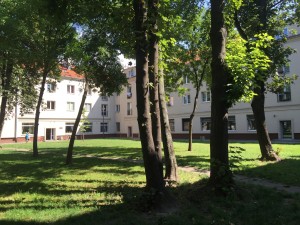 So while I was expecting blocks of grey buildings in Nowa Huta, what I found was an attractive town,  based on “neighborhood units”. There were detached buildings covered with hip roofs and lots of greenery (it was built to be a garden city and the greenery was planted together with the construction of housing). For every 5000 – 6000 residents there was an infrastructure of shops, kindergartens and schools so that children wouldn’t have to cross busy roads and the adults wouldn’t have to move too far for daily business. The streets were wide with green center medians, and the sidewalks were wide and pedestrian friendly.

The early units were closed quarters with gates leading to an inner courtyard. In a world still reeling from WW II, and half expecting a WW III, this meant the entrances to the courtyards could be closed off by a tank or two. And given those concerns, it wasn’t surprising that each block had its very own shelter.

Unfortunately the town was never competed and what is still missing are buildings planned to complete the Central Square. Nevertheless, it is quite a pleasant place, and beginning to be appreciated by the people of Kraków.