When we had told people we are going to take the Trans-Siberian Railway, there were quite a few I’ve-always-wanted-to-do-that’s, or at least flickers of interest. When I added we are planning two weeks in Mongolia with a trip into the Gobi Desert, the looks of interest faded into blank stares.

They had no idea what they would be missing, but then again, neither did I before 2010 when “Genghis Khan: The Exhibition” rolled into, of all places, The Tech Museum in San Jose. Turns out that Genghis Kahn and the Moguls were not simply the slaughtering and enslaving barbarians they are usually made out to be. They were masters of innovation with a sophisticated technology for the time (and perhaps the rationale for this exhibition being brought to you by a tech museum) and culture. Over a period of thirty years Genghis Kahn transformed a collection of nomadic tribes into one of the greatest armies in the world, and in the next twenty years created the greatest continental empire the world has ever seen. Contemplate that for a while — it took longer to unite a common people than it did to conquer the world.

Aside from Genghis Kahn, there is a lot of amazing things about Mongolia. Besides the Mongol Empire founded by Genghis Khan in 1206, it was the home to two other great nomadic empires that ruled large parts of the world — the 4th century Hunnic Empire (of Atilla the Hun fame), and the mid 8th and 9th centuries Uyghur (Turkic) Empire. Later the Uyghur moved to Turkey and constructed the Ottoman Empire. It is also home to the Gobi Desert, one of the world’s great deserts, with its dunes, mountains, rare animals, and even a deep ice field. And to cap things off, it is the start of the steppes of Central Asia (someplace, God knows why, that I have always wanted to see).

I was torn when I first started planning our Trans-Siberian Railway trip. The railroad journey that lured me was from Vladivostok (on the Pacific Ocean) to Moscow — a quintessential epic journey of 9,259 kilometers through seven time zones, But I was hooked on going to Mongolia, so I opted for the shorter route from Beijing through Mongolia and then on to Moscow — a mere 7,621 kilometers through five time zones — although, I confess, I am still tempted by route from Vladivostok.

My trip through Mongolia was just me with my guide, Ganzorig (Linda was in the US as I explained in my previous post). Our trip was more like a conversation rather than a tour, and another one of those best-experiences-I-have-ever-had. We traveled in his pride and joy — a 1995 Toyota Land Cruiser, with Japanese right-hand drive, that he bought in 2009. Easy to work on, easy to fix, great on the dirt roads, and we traveled with a box of parts in back just in case. It turned out to be the perfect vehicle for our more than 2000 kilometer trip on mostly dirt roads.

As we drove he talked. Almost 50 percent of the population lives in the capital Ulaanbaatar, but 25 to 40 percent are still nomadic and in many ways similar to the nomads that Genghis Kahn united in the 1200s. They are not the trendy nomads that you might read about in the Sunday Supplement that can work from anywhere. Since animals are the source of life in Mongolia (there are more than 2 million horses, 10 million cows, 20 million goats and sheep and 1 million camels), depending on their animals, a nomadic family might be in the steppes, the Gobi, or in Western or Northern Mongolia. They move four times per year (usually around 30 kilometers), to the best pastures for their animals depending on the season (the Gobi moves are usually twice a year) — returning back to the same place every season, With Mongolia being the seventh largest country in land area, but with the third-lowest population density of any country, there is still plenty of open space for them.

But here, as in almost every other place in the world, things are beginning to change, and there is some concern about the future. Young adults want jobs in the city, they want smartphones, and they are not that interested in the nomadic ways. So while Mongolia may have escaped the industrial revolution, it can’t escape the influence of the internet.

We left early morning and head south, driving down through the steppes to the Middle Gobi desert. As we drove from Ulanbaataar the hills turned gentle, and we were on the steppes. It seemed like you could get on a horse and ride forever.

And then we were in the Gobi. 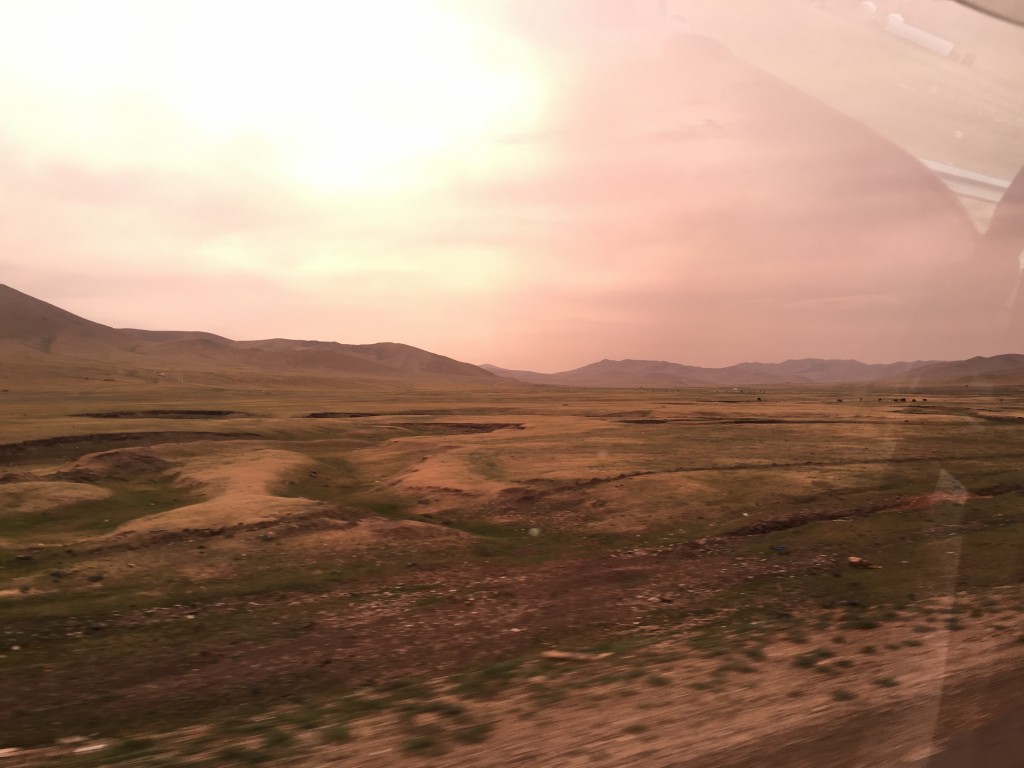 At around 1.2 million square kilometers the Gobi, south of Altai Mountains and Mongolian steppes and north of Tibetan Plateau and North China Plain, is the largest desert in Asia. It is a cold desert — one that can have subarctic winter temperatures and hot summers. Its climate is driven by the nearly continual high winds, up to 140 kilometers (90 miles) per hour, in the spring and fall, and which I would later learn about first hand. It has little soil and few plants due to the low precipitation and the constant high winds that blow the soil away.

We drove south from Ulaanbaatar listening to the Beatles, the Beach Boys, some R&B, and Mongolian hip hop for the first 200 km, and then traditional Mongolian music for the 60 kilometers of not-bad dirt roads we drove from the steppes to the Middle Gobi. 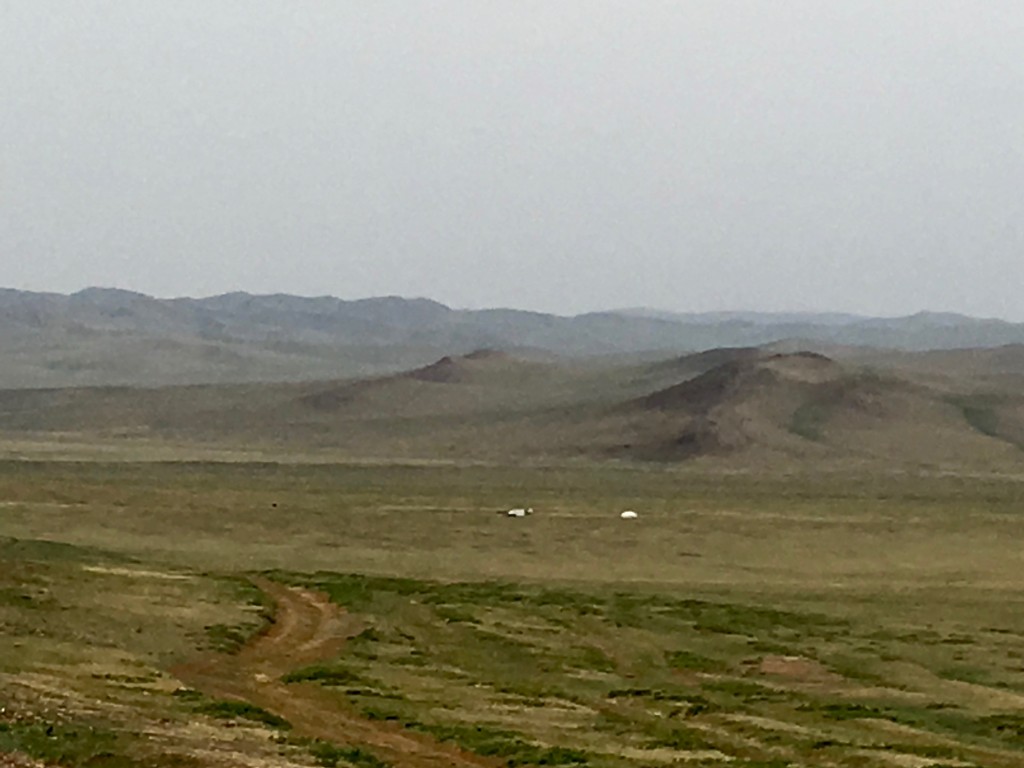 The road into the desert

While the Gobi is a desert with just a little over 19 centimeters, or 7.6 inches of precipitation a year, most of it was determined to fall on us as we drove. According to Ganzorig, rain in the Gobi is a blessing, so I guess we were really blessed that day … and night. The combination of the wind, rain, and a new road that was not well marked ended up with us missing a turnoff to the tourist camp where we were staying and heading 20 kilometers into the desert. The combination of GPS and a friendly driver of another car got us back on the road to the tourist camp, and I realized, yet again, that nature, especially in the Gobi, is not some kind of theme park, and if we did get lost we could be in serious trouble.

Back on the road to the tourist camp it would clear occasionally, and I saw the great vistas, and right before we got to the camp, several gazelles in the distance. 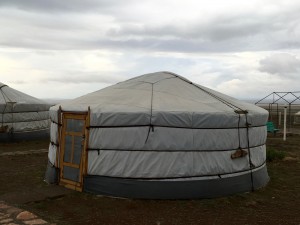 As we explored the Gobi, we would be staying in tourist camps, each of us in our ger, with a bed, a table, and sometimes cupboards and sometimes a traditional stove, and sometimes even a working traditional stove with wood. In some ways tourist camps we stayed in were like campgrounds I was familiar with. There was a central building, which always ended up being some distance from my ger, with some degree of low-pressure hot water, showers, sinks, and western style toilets. Then there was the part I wasn’t familiar with — a separate building or big ger a restaurant or dining room where we ate our meals. 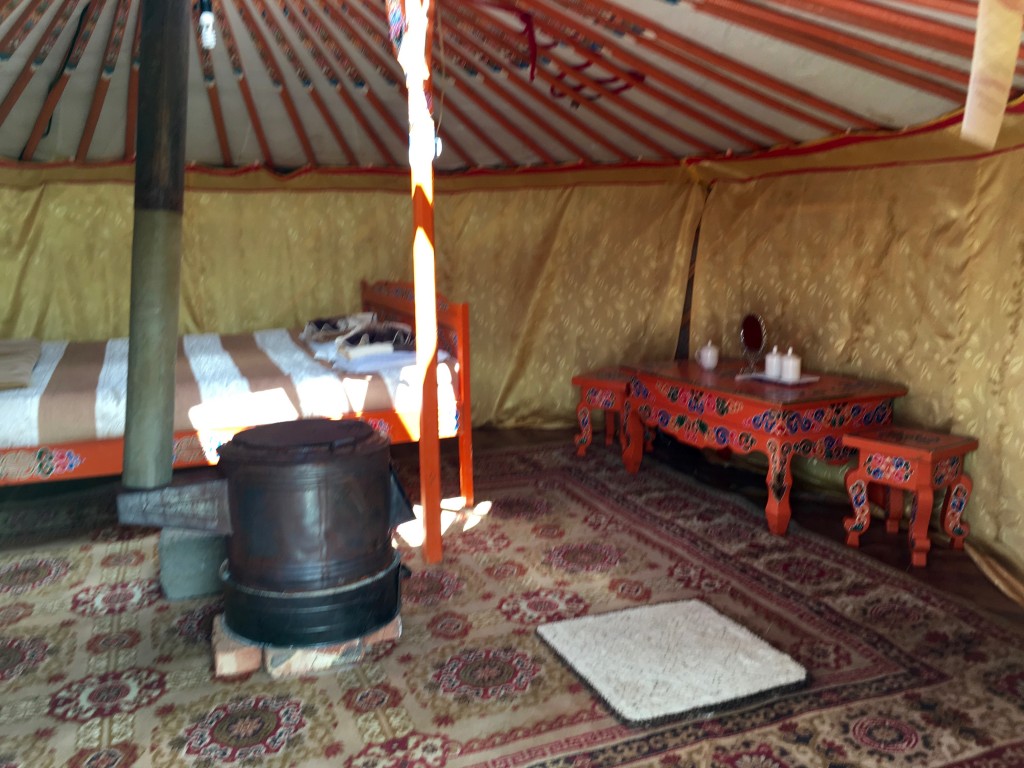 The inside can be quite comfortable

If you are a foodie, traditional Mongolian food will be a real disappointment. Mongolian food is about meat — mutton, not lamb (they don’t kill baby animals), beef, not veal, and camel and horse. The last one they don’t serve in tourist camps because they cater to western sensibilities. Since the only crop they grow in quantity is wheat, the other staple is noodles. Occasionally in the camp we would have Mongolian food, but usually it was some kind of hybrid. Breakfast almost always was European style, but sometimes you would find traditional noodle soup. Lunch was usually soup and meat, usually Russian style or pseudo-traditional Mongolian, and dinner the same, but without the soup.

After eating out for eleven months, I didn’t care about the lack of dining opportunities in the camps or the toughness of the meat. But while Linda was in the US I needed to communicate with her, but I didn’t even care that there was no wifi since I had bought a Mongolian sim for my phone which worked sporadically for data, but often enough in the desert.

What I did care about, though, was no electricity. Except for only one camp that was connected to central (24-hour) electricity, the rest had generators that were only used in the evening, usually around 8 or 9 when it started to get dark, allowing you to have light for using the washroom facilities, reading, and most importantly charging your phone. It was sometimes a real challenge to keep my phone and spare batteries charged, and putting or taking out contact lenses using a flashlight was, to say the least, a real challenge.

When we finally got to the camp, the wind and rain had returned and we decided to hunker down and explore that part of the Gobi the next morning.

It got rainier and windier as night fell, and I spent the night in my ger listing to the storm and trying to decide whether it was raining very hard, or simply raining with high winds, or both. The answer was c. Nevertheless, it was an almost comforting sound if you didn’t have to go out in it. Since it never rained in the part of the Gobi at this time of the year, they didn’t have the stove working, and besides being windy and rainy, it was unseasonably cold. It was the first of more than one night when I would sleep with all my clothes on.

But in spite of all of that, the Gobi was going to turn out to be one of the most magnificent places I have ever been.