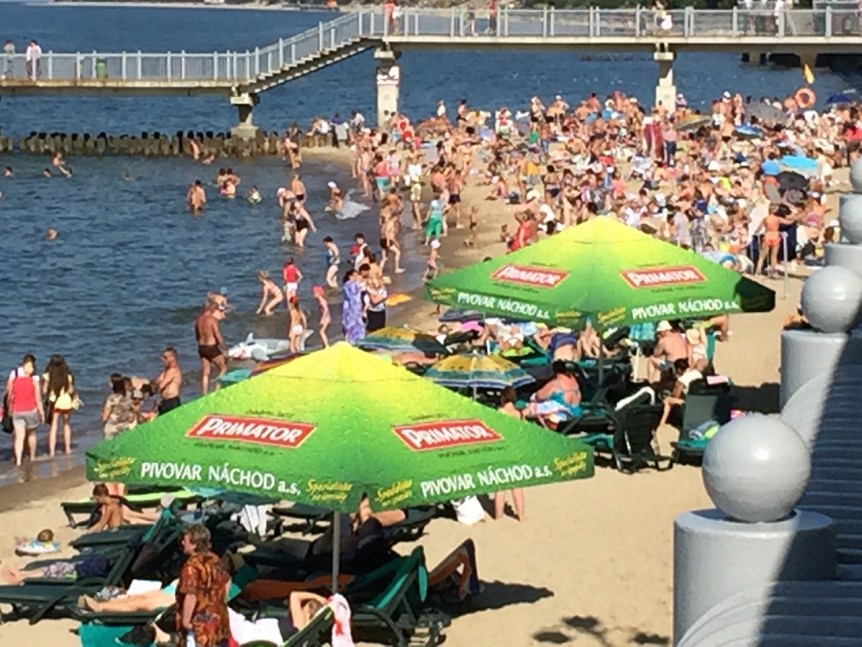 With the three day jazz festival over, we had a free day and night and the administrator (I think more like the manager) of the hotel suggested we take a trip to the sea. She told us we could take a cab, but the bus went right there and it was so much cheaper. We opted for the bus because we thought it would be more interesting.

So off we headed to Svetlogorsk on the Baltic

She had told us the bus station was in front of the McDonalds on the way to the city center. The only confusion was that there were two McDonalds on the way to the city center, and the one we went to was the wrong one. Across the street there was a large plaza so we went searching for someone who first, looked like they spoke English, and second, who might be a native and actually know where the bus station was. We found a youngish woman who was sitting on a bench with two girls, who looked to us to be in their early teens. She didn’t speak English, but one of the girls did, and she tried to explain to us how to find the bus station. She started and stopped a few times, and then realizing she was not going to be able to explain it to us, she said “It’s kind of hidden, I’ll take you there.” She said something to the older woman, we thought was her mother, and after much protestation on our part, off we went.

She led us back through parking lots and side streets to a McDonalds we had passed earlier on our way from the hotel — one we hadn’t noticed. One of the reasons we haven’t noticed it was that the McDonalds we headed for originally was in a large building, which we had thought was the bus station. It turned out that the bus station was not a building, but more like a very long bus stop on a main street

After profusely thanking the two girls, We got on the 118 bus to Svetlogorsk.

It was crowded and it was hot and we had to stand, hoping that people would be getting off along the way. We were stuck in the middle of the bus, and when we noticed the people sitting on either side of where we were standing were a family, with a small child and a bunch of sand toys, we realized our prospects for getting a seat were slim.

But while one or two people did get off along the way, a few more people got on. There was a lot of traffic getting out of Kaliningrad (no matter what time of the day there was always stop and go traffic getting into or out of Kaliningrad)  and the bus was hot and we were sweaty. Seems there was some kind of cooling system but it only worked when the bus was cruising along, not the case for the first half hour or so. But after we broke out of the traffic it did get a little, but just a little cooler.. 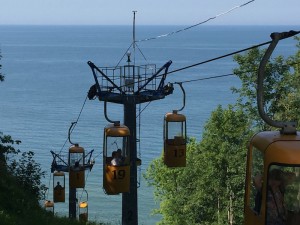 And then we got to Svetlogorsk, but not yet to the Baltic. After asking around we found one way down — a rather rickity two person gondola (later we would find had we gone the other way there was nice paved road).

And then we got to the Baltic.

We walked the beach area for a while and then sat down at a restaurant overlooking the beach and the sea.

I finally succumbed to the pizza, something I had been avoiding, 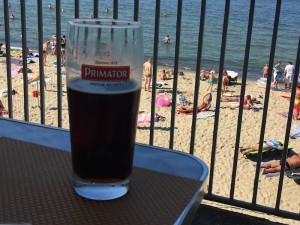 although it, along with kabobs, seems to be the national dish of Kaliningrad, and along with it, one of the best glasses of beer I have ever had (not based on taste but by how good it tasted after being hot and sweaty on the bus).

After waiting 45 minutes for the pizza (go figure that one) it turned out to be surprisingly good, with a different sort of crust, but quite tasty nonetheless.

When went back up on the rickety gondola to Svetlogorsk we saw a 118 bus waiting, one we could take to get back into the city. There were no seats so we decided to wait for the next one, and walked around strategizing how to get a seat.

Turns out it was easy, the strategy that is, not necessarily the execution. All you had to do was stand in the middle of where you think the bus is going to stop and go in that (the middle as opposed to the front) door. This gives you more options than if you go in the front. As soon as the bus stops, you push and shove along with everyone else to get in the door, look left and right quickly to find seats, and then grab one.

I was lucky to be right in front of the door when the bus stopped, but after all of the pushing and shoving (of me) I wasn’t even one of the first few to get on the bus, although I did get us seats, and defended the one I was saving for Linda until she could get on.

The conductors, on at least the two busses we took, were the stereotypical middle aged Russian women, and you paid them for your fare. I realized we were in a bit of trouble when she started talking to Linda (who was sitting on the aisle) with what seemed to be a question of “where are you going?” We said “Kaliningrad,” and got some more Russian back — one of the words sounding like “central”. I realized that there were at least two stops in Kaliningrad, the one we got on and one before it, further into the city, where all the people that were on the bus we took on the way had gotten on. She, and no one around us spoke English, and then with a flash of inspiration I said “McDonalds” and then gave a shrug and smile. That even got a little smile from her, and we paid our fare.

As we got about halfway to the city, the traffic got bad, and we soon found out why. We pulled up alongside a broken-down bus (this was a two lane road mind you so there was lots of honking) — it was the earlier bus from Svetlogorsk we didn’t take. At that point that bus wasn’t full, and I have no idea where the rest of the passengers disappeared to, but those that were left squeezed themselves onto our bus.

Of course we got our comeuppance at the end of the day when the wheel of fortune turned yet again.  The bus stopped in an area that I thought was close to where we wanted to be, but there was no McDonalds across the street … yet. After a lot of people got off, we went another block, and there was the McDonalds we wanted. The bus of course went on and on before it would stop again, and we could get off. We couldn’t find a cab, and after a long day, it was a long walk back to the hotel.

It was worth the trip to Kaliningrad, despite no real tourist infrastructure, the weather, the concert selection (for me), not that much to see and do, and the fact that no one spoke English. However, the people were friendly, and the city was clean, (although there were lots of potholes in the process of being fixed). It is an interesting place to start our trip, moving us somewhat out of our comfort zone, but not enough to make us too crazy.