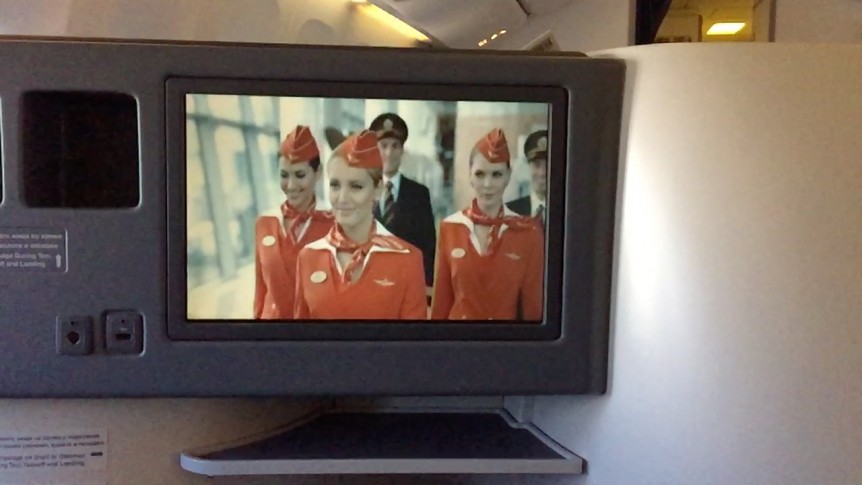 We first heard about Kaliningrad from an art gallery owner in Scottsdale, Arizona, who told us that this was one place we shouldn’t miss.

Until the end of World War II, the area formed the northern part of the former East Prussia. The city itself was largely destroyed during World War II and its ruins were captured by the Russian Army on April 9th, 1945. Its German population left or was removed by force. After World War II, East Prussia was divided between the USSR and Poland.

Since its creation after World War II, it has been a Russian exclave, first of the Russian Soviet Federative Socialist Republic (SFSR) and then of the Russian Federation. Kaliningrad is currently a Russian Oblast (think province), surrounded by Poland, Lithuania, and the Baltic Sea, with no land connection to the rest of Russia.

The oblast’s largest city and administrative center is Kaliningrad (formerly Königsberg), which was both a major city of the historical state of Prussia and the capital of the former German province of East Prussia. Königsberg was renamed Kaliningrad after the Soviet head of state, Mikhail Kalinin, on July 4, 1946, and in 2005 Kaliningrad celebrated its 750 years of existence. About a million people or so now live there, mostly in the city of Kaliningrad.

When I started to look at what there was to do and see in Kaliningrad, I found that this was the tenth anniversary of the Kaliningrad Jazz Festival, and Kaliningrad moved up on our list to become a let’s-go-there place. After all, who would have imagined a jazz festival, in Kaliningrad, Russia, with jazz groups from around the world (including Israel)?

We finally started our grand adventure at 7:00 am (PDT) on July 29th from Scottsdale, Arizona, and eventually checked into our hotel about 8:00 pm (EET). To save you from having to do the math, that’s 28 hours in transit.

The most interesting part of the trip to Kaliningrad was how uninteresting it was. We checked our bags at US Air in Phoenix and they were supposed to fly along with us to Los Angeles, Moscow, and then on to Kaliningrad. In retrospect, it was probably not that smart to do it that way. Los Angeles to Moscow to Kaliningrad was risky enough. Why tempt fate by trusting US Air to successfully send our bags to Aeroflot Airlines in Los Angeles? But as Otto von Bismarck said, “There is a Providence that protects idiots, drunkards, children and the United States of America.” And fitting into at least two of those categories, it did all work out.

When I originally had to rebook our flight for the second time, pushing them out a week, the customer service person at AirTreks had to scramble to find something. She gave me two choices, Aeroflot or Transaero Airlines. When I asked her which she thought was better, she said “If you have to travel on a Russian Airline, Aeroflot is the way to go.”

But the unsaid question was really, “Why do you have to fly a Russian airline?”

It turns out that Aeroflot has done a good job in transforming itself from a who-cares-about-you, you-have-no-choice, state owned airline to a real global competitor. Not the best business class in the world, but pretty good, and certainly better than most domestic first class. Their flight attendants even had a new uniform that I sort of liked and Linda thought was still their uniforms from the ‘60s. It turns out that Yahoo! had named Aeroflot’s cabin crew uniforms among the top chicest uniforms globally. 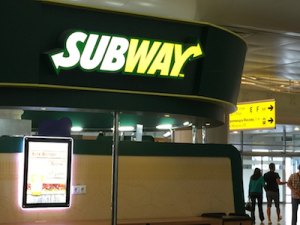 As we landed in Moscow, I really had no idea what it would be like. I had read in the Moscow Times on the fight that while 70 percent of respondents still said that their attitude toward the U.S. was “mostly negative” or “very negative,” that figure was three percent less than three months ago, and 11 percent less than at the beginning of the year. I began to think, “What are we getting ourselves into?” So I was certainly surprised when the first thing I saw when we left immigration control in Moscow was a Subway sign.

And it turned out all of the airport signs were in both Russian and English, and so far, enough people spoke enough English to make things relatively easy. 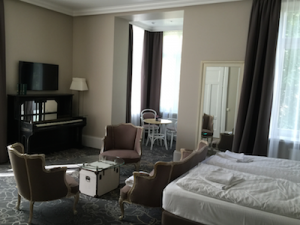 Our hotel in Kaliningrad, Hotel Tchaikovsky, is in an historical building and is charming yet modern. We are in, as we were told, the best room in the hotel, and one of the nicest and most charming rooms I have ever stayed in.

So far so good.