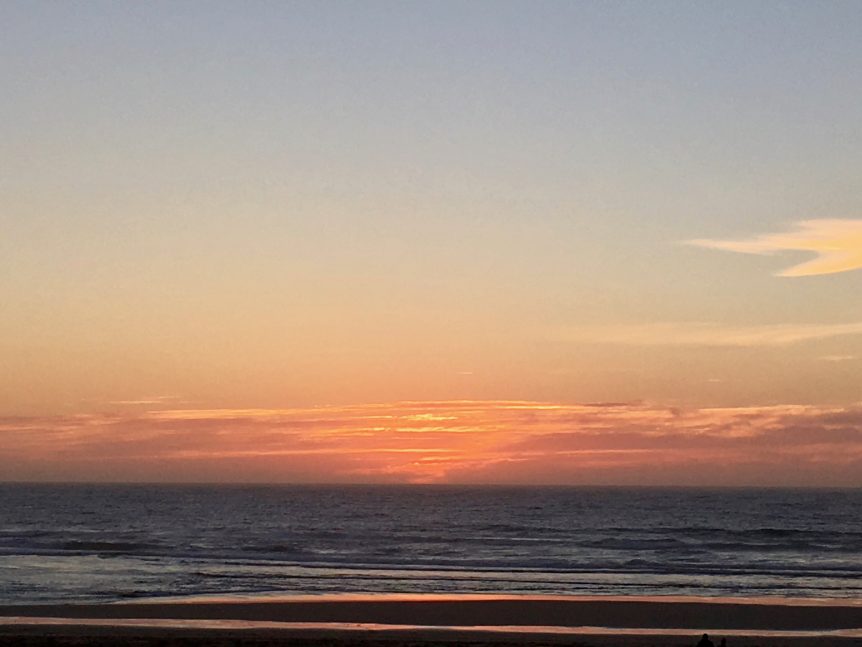 Portugal’s path to becoming a world power started in Porto, an outpost of the Roman Empire, on the Douro River in Northern Portugal, and the origin of the name “Portugal” is likely Porto’s combined Celtic-Latin name, Portus Calee. But while locals refer to it as Porto, others call it Oporto, which leads to quite a sense of confusion, since it is poor form not to know the name of the place you are visiting. It turns out the name really is Porto — with Oporto drifting into the lexicon because, in Portuguese, the name of the city is spelled with a definite article (“o Porto”; English: the port), and the name Oporto is the result of a misinterpretation of the oral pronunciation.

While Portugal has its roots at the end of the 9th century as a country, it traces its origin to June 24, 1128, when, after the Battle of São Mamede (not far from Porto), Afonso Henriques proclaimed himself Prince of Portugal, and then in 1139, the King of Portugal.

At this point, there wasn’t much to Portugal, just a small area in what is today northwest Portugal. But then, as part of the Reconquista (a series of campaigns by Christian states to recapture territory that had been conquered by the Moors in 710), Afonso led the Crusader knights and besieged and conquered Lisbon in 1147, and since it was centrally located, it became the capital city of Portugal in 1255.

We liked Lisbon a lot, but Porto did manage to seduce us. While Lisbon physically is more like San Francisco, and Porto is only somewhat similar (it does have a few bridges, but only one hill, and no earthquakes), it felt more like San Francisco. It is older and more historic than Lisbon and has always been known as a liberal and progressive city, with a long-standing tradition of defending civil rights. Its population withstood a long military siege by the royalist forces between 1832 and 1833 to support the Constitutional Charter, and the subsequent victory of the liberal cause was partly due to the sacrifice of the people there. 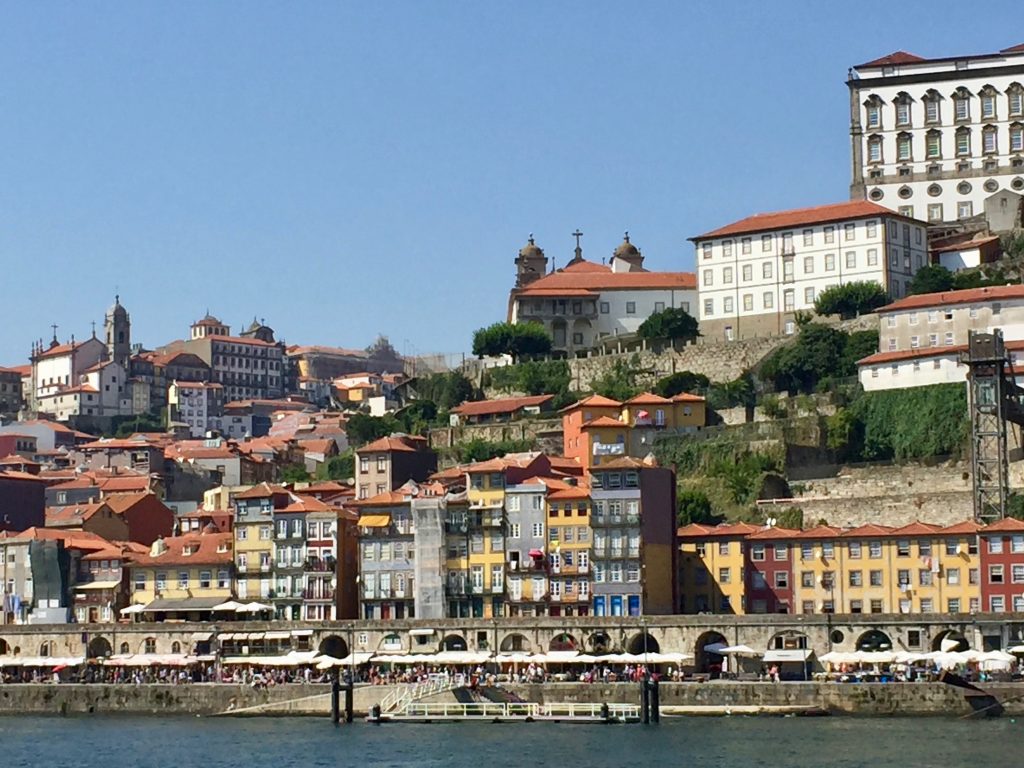 Porto from across the Douro River

But while the North had lost its standing as the center of the country when Lisbon became the capital after the Reconquista, Porto was still a place to be reckoned with for two reasons.

By the 13th century wine produced in the Douro Valley, about 300 kilometers from Porto, was being transported to Porto in barcos rabelos (flat sailing vessels).

Although the valley was the perfect place for growing grapes and producing wine (especially Port), because of its weather it was far from the ideal place to age wine — but Porto was. Unfortunately the bishops of Porto were charging unreasonable shipping charges on the wines, so the lodges of the historic port wine producers, their caves (cellars), aging tanks, and tasting rooms strung out along the ribeira (riverside) ended up in Vila Nova de Gaia, just across the Douro River from Porto, making it, and not Porto, the real Port wine town. 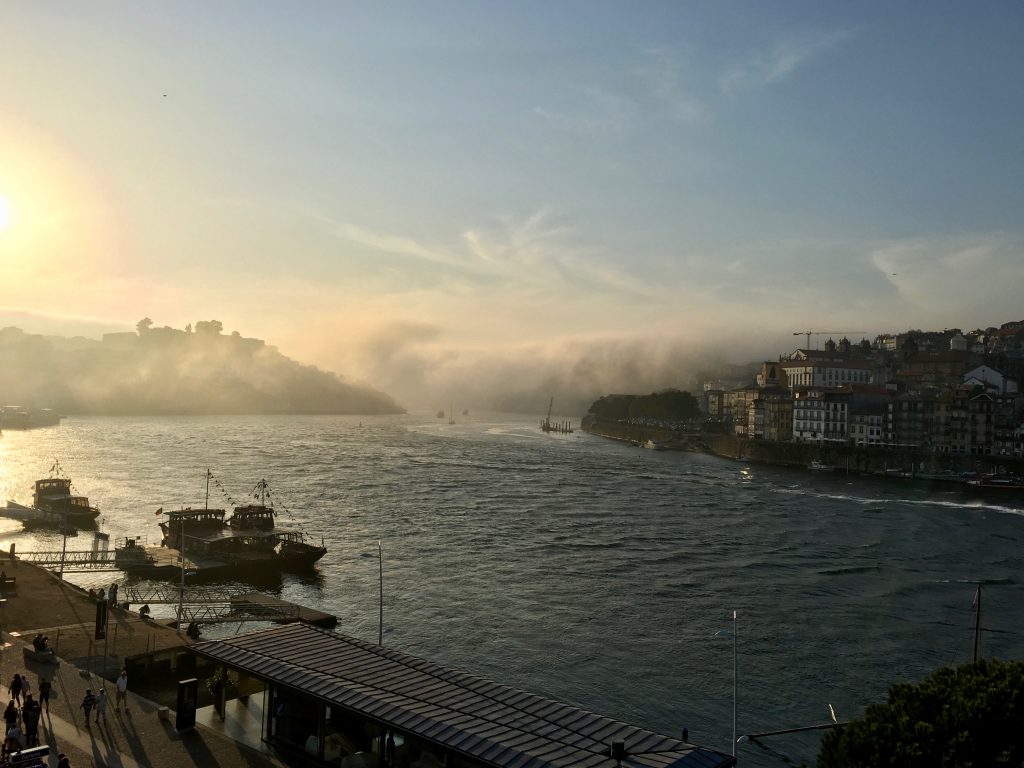 In the 17th century, the region’s vineyards expanded, and then in 1703 the Port wine producers got a real break. One of the terms of the Methuen Treaty (part of a geopolitical move by England against France) specified Portuguese wines imported into England were subject to a third less duty than wines imported from France, and Port started to become a popular replacement for French wines. The production of Port wine subsequently became the primary product of the region around Porto, and economically important to Portugal. To regulate its production and trade, a royal Portuguese charter of 10 September 1756, defined the production region for Port wine — the world’s first wine region to have a formal demarcation. Over time, the vineyards expanded east into hotter and drier areas, and today there are great non-Port red and white wines from there as well. 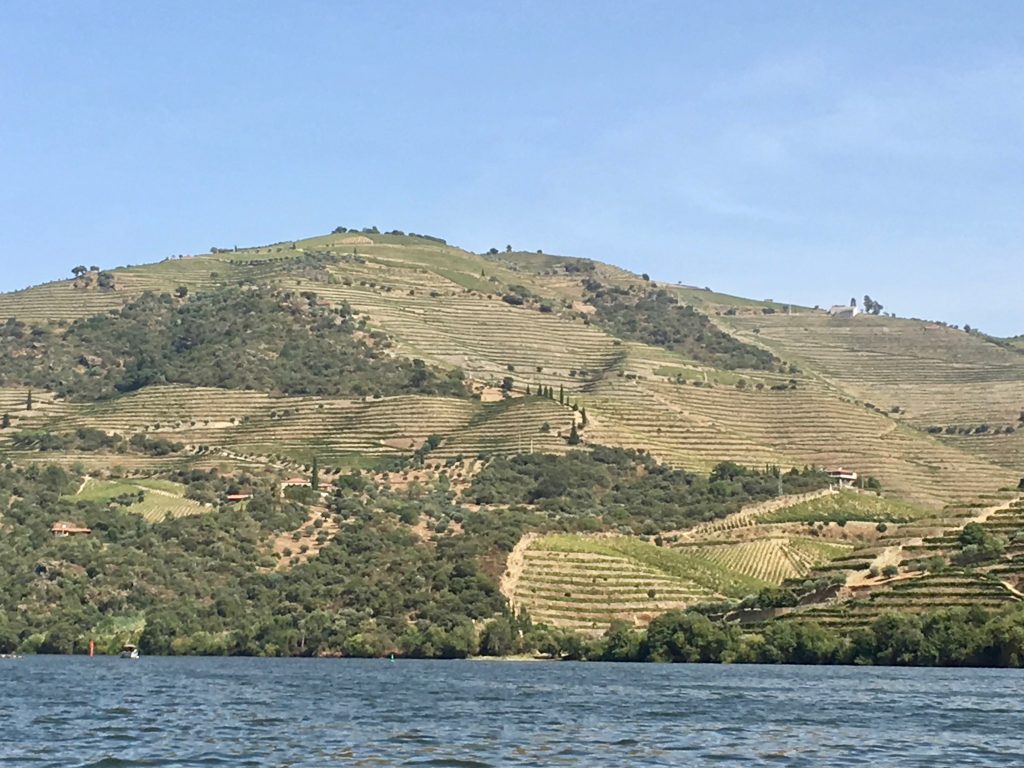 In the Douro Valley

Up to this point we had never been on a food tour, but the story was so interesting, the guide we had on a  walking tour of Porto so enthusiastic, and my knowledge of Port wine so minute, that we decided to go on a Port wine tasting tour with her through Vila Nova de Gaia. As if by magic, and fortified by a few glasses of Port, in those few hours I changed from someone who was mostly indifferent to the wine to someone who could begin to appreciate it. In fact, we later found one we liked so much we even lugged several bottles with us around Portugal and Spain (drinking most of it along the way) so we could share a bottle with friends from the U.S. we were meeting in Barcelona.

Before that, between the 13th and 15th century, as links with important European ports were strengthened and maritime commercial activities in Porto became significant, the shipyards of Porto became the most important ones in the country. And here our story of the Age of Exploration resumes.

It made sense then, when in 1415 John I of Portugal led his sons (including Prince Henry the Navigator, born in Porto) and their assembled forces, they would embark from Porto on the conquest of the Moorish port of Ceuta in northern Morocco, and launch Portugal as a power on the high seas.

But Porto’s role as the major embarkation point faded as more and more sea voyages left from the Algarve in Southern Portugal. The Algarve had finally been conquered from the Moors in 1249, and it was in the Algarve where we finished exploring the Age of Exploration.

The Algarve is spectacularly beautiful 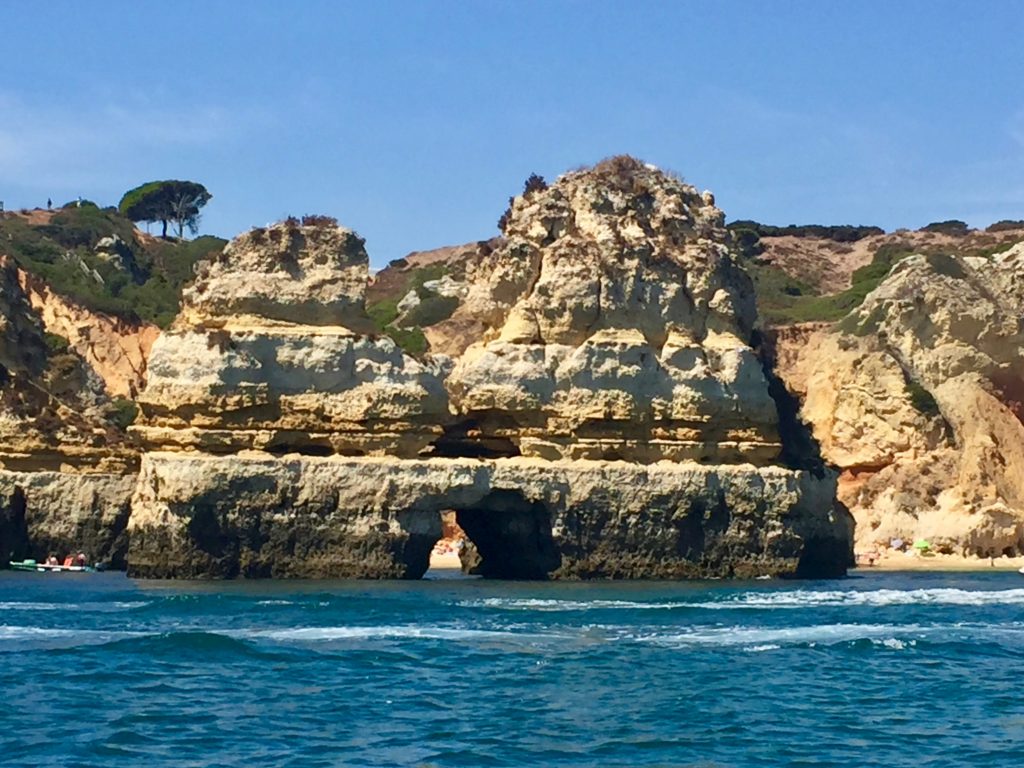 … and here we found the most south-westerly community in Portugal and continental Europe — Sagres — overlooking the Bay of Sagres. As we looked in wonder at the fortress on the massive plateau of Sagres Point on the ten-kilometer arc of sheer cliffs, and later at the lighthouse at Cape St. Vincent, we could feel  the history there. At the lighthouse we sat quietly on the cliff top, gazing out to sea, imagining the voyages of the extraordinary adventurers who left from here.

The plateau at Sagres Point 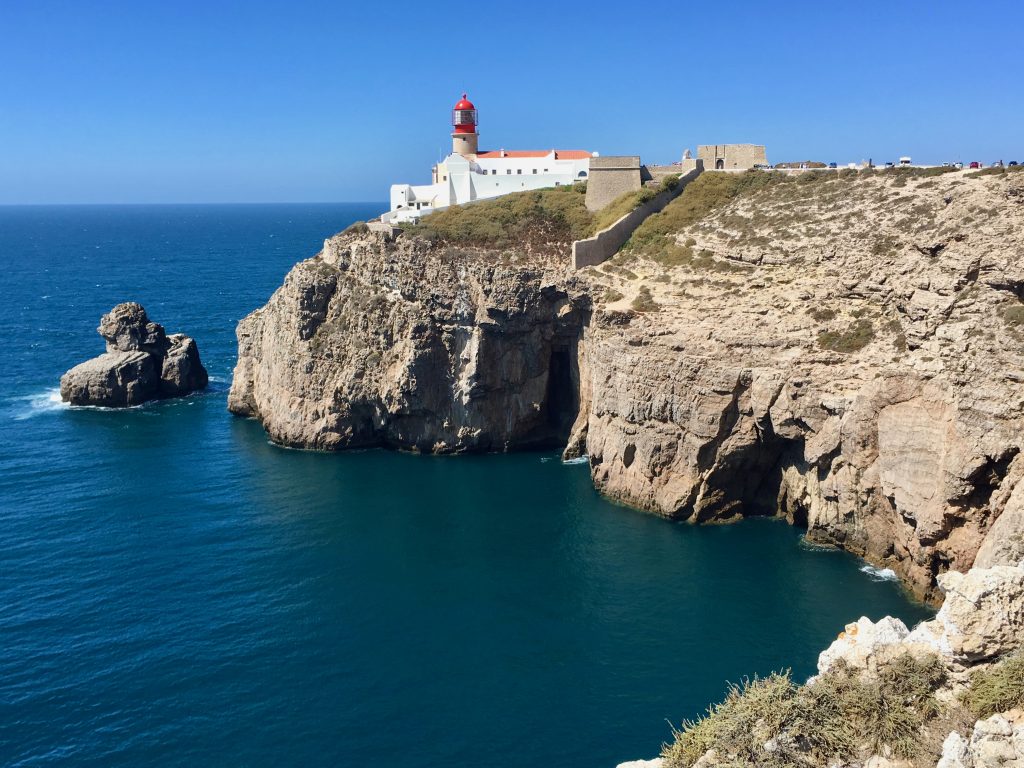 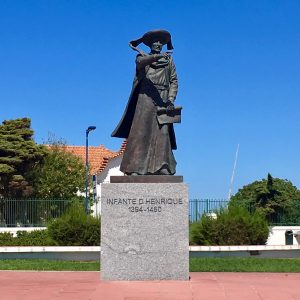 Prince Henry the Navigator, a veteran of the Invasion of Ceuta, came to Sagres as Governor in 1419, and to work on his obsession to push beyond the existing boundaries of the known world, and in the process launched The Age of Exploration.

When Henry began masterminding and directing operations at Sagres and Lagos (not far from Sagres) in 1419, the known southern limit of the Atlantic Ocean was the dreaded Cape Bojador in West Africa. Apart from all the superstitions about serpents and sea monsters, it was exceedingly dangerous because of the violent waves, strong currents, treacherous shallows and frequent mist; and explorers and their crews shared the delusion that if you rounded the cape, there was no possibility of return. But from 1421 on, Henry, who had no such belief (and was safely back in the Algarve) sent out expeditions with orders to pass Cape Bojador. One of Henry’s greatest achievements was when Gil Eanes of Lagos became the first European captain to round Cape Bojador.

Henry lived in the vicinity of Sagres for most of his life and died there on November 13, 1460, at the age of 66. He made a monumental contribution to geographical discovery and opened up the trade and cultural links between Europe and the East. But while he had paved the way, he didn’t live long enough to savor and share in the successes of Bartolomeu Dias, who rounded the Cape of Good Hope in 1488, and Vasco da Gama, who finally pushed through the sea route to India in 1498.

As we went on to explore the breathtaking coast north of Sagres, we could begin to understand what had both attracted and frightened the early settlers. 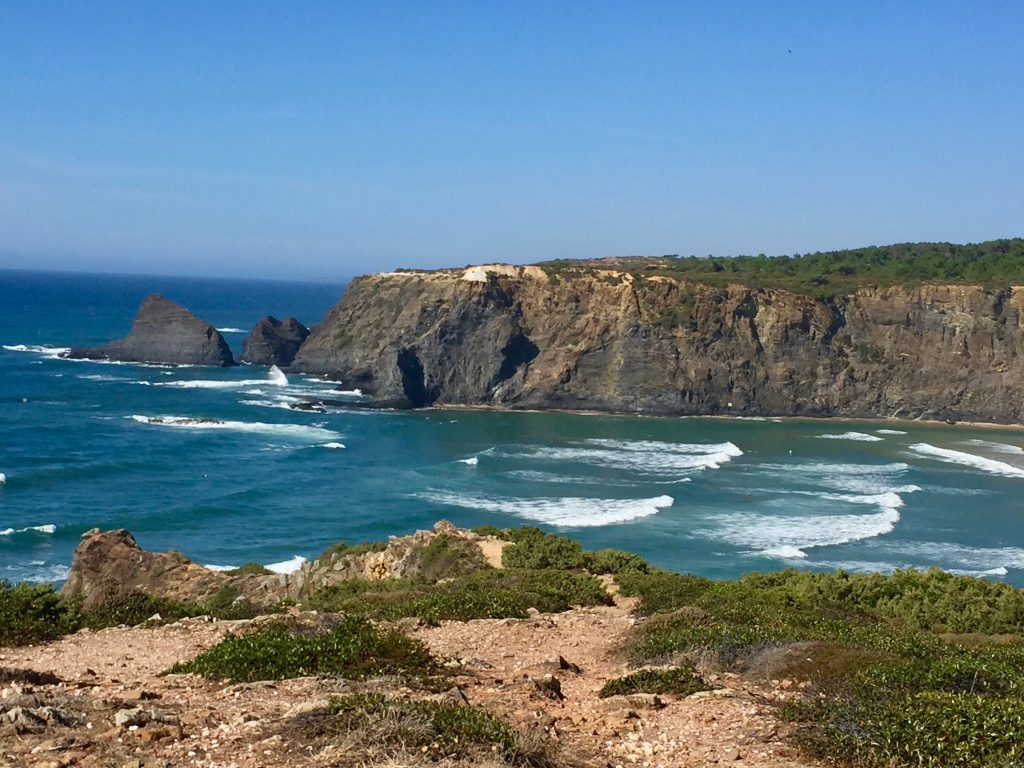 A random beach in the Northwestern Algarve

It was a fitting end to our trip through Portugal’s Age of Exploration.