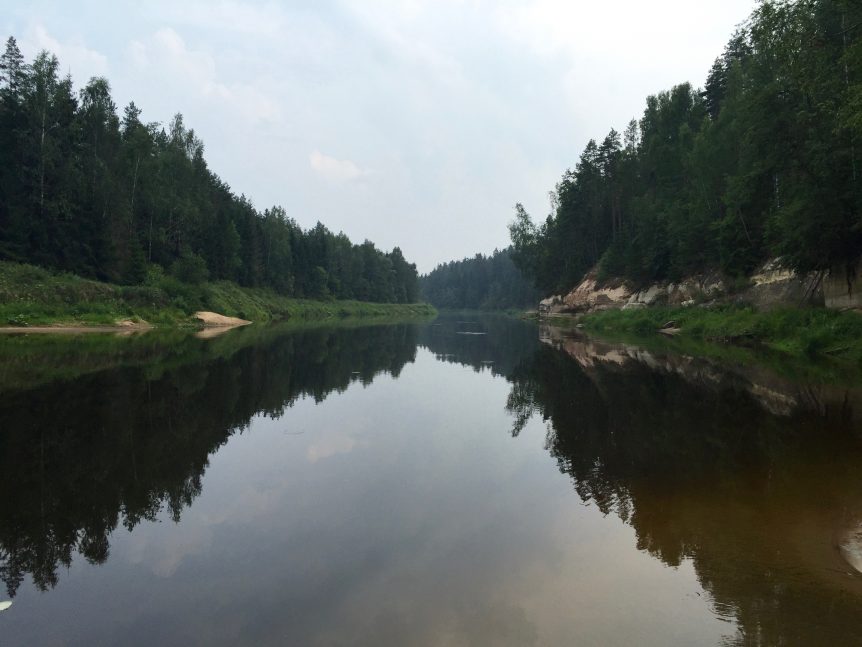 We really liked the Baltic States and found the people we met to be among the nicest, warmest, and friendliest we have met during our travels, but we were troubled by some things we discovered in Lithuania.

Because I didn’t realize how cool the Baltics were, we only planned to be there for three weeks, and we stayed in old town hotels in each capital — Tallinn, Riga, and Vilnius. There was music everywhere, and the old towns, while charming and with great tourist services, had mostly been destroyed during WW II and rebuilt after the war. In the background there was always a whisper of “I’m in a theme park” which did make it difficult to capture the essence of the place. We did meet quite a few locals — and every one of them told us to get out of the old towns and explore the real cities, which we did. 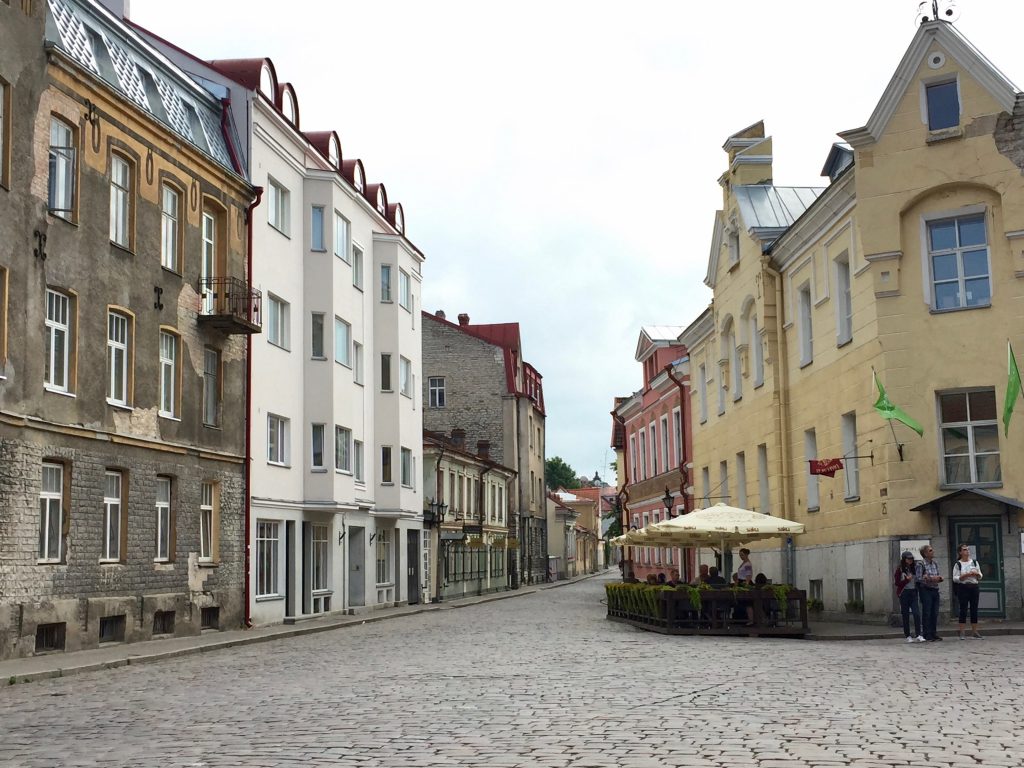 Very pretty, and very pleasant, but …

In Tallinn, we walked the Cultural Kilometre (Kultuurikilomeeter), a footpath that runs through a part of post-Soviet, post-industrial Tallinn. It was built on an old railroad track and runs along the sea for more than a mile, and includes a couple of old Soviet buildings. It more or less starts (or ends depending on your perspective) at the now abandoned V. I. Lenin Palace of Culture and Sport, which was later renamed to its present name — Linnahall. From there you can sit in the sun at the top, gaze across the Baltic, watch the high-speed Helsinki to Tallinn ferries dock, and the local skateboarders sitting in the sun and drinking beer. 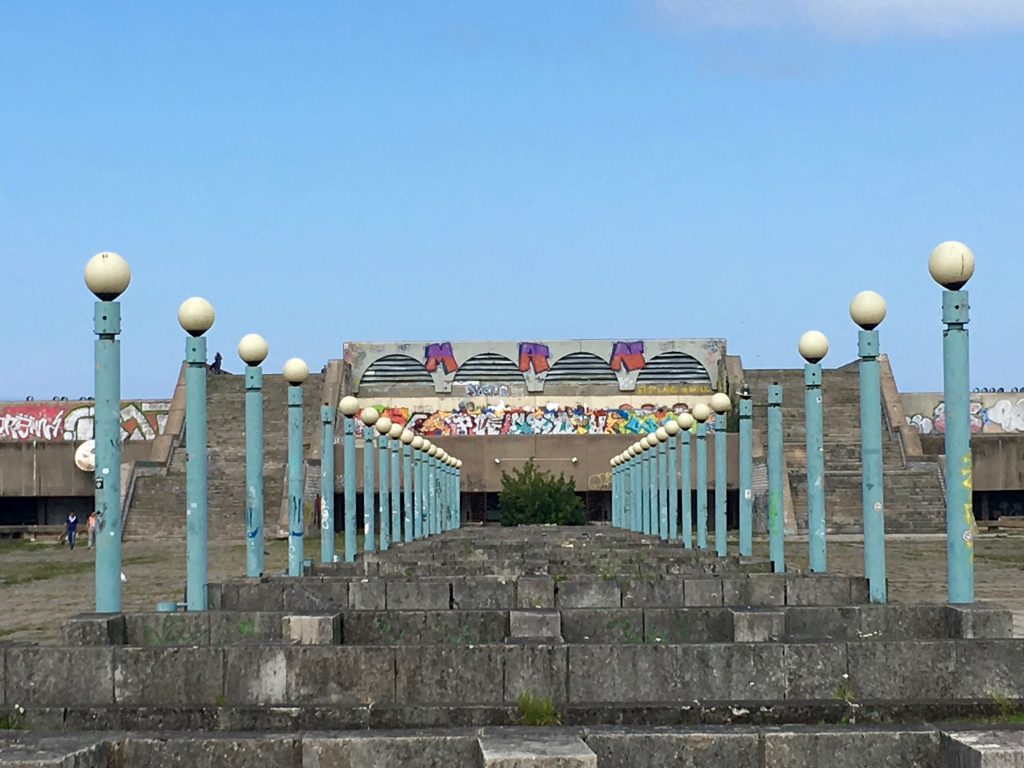 V. I. Lenin Palace of Culture and Sport — you can’t get any more Soviet than this

Along the way there is the sea fortress of Patarei, completed in 1840, ordered to be built by Nicholas I of Russia to protect the sailing route to St. Petersburg, then the capital of the Russian empire. Over the years it has been a military barracks, and from 1919 until 2004 it was a prison — giving you a glimpse of Soviet-era prison life in all its dreariness. 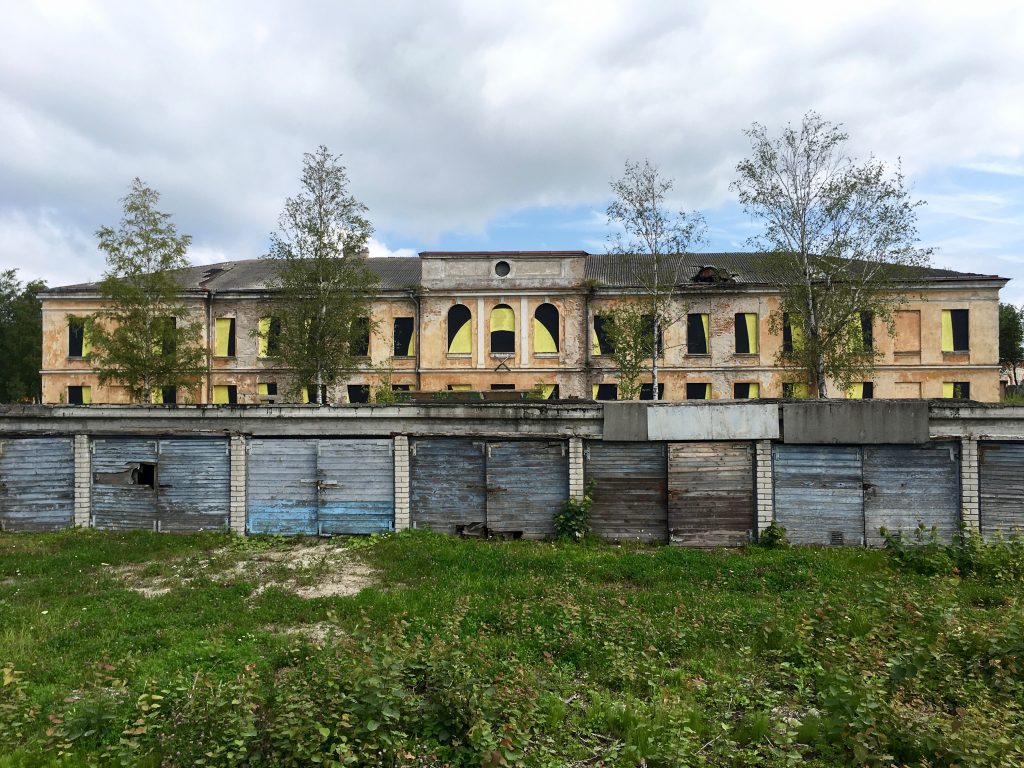 It felt like a scene from a horror movie

At the other end is the Estonian Maritime Museum at the Seaplane Harbor, and it was a pleasure to watch children playing in and around some very interesting old ships.

Past the museum is the former fishermen’s district of Kalamaja where we wandered the streets filled with the old wooden houses (the “Tallinn Houses”) where the working class lived. Built in the 1920s and 1930s, these two to three-story houses have two symmetrical wooden wings separated by a central stone staircase.

This area is also home to Telliskivi Creative City, an old factory complex and industrial park that considers itself the heart of all things hip and an umbrella organization for everything creative and innovative. While it was also touristy, it was at least mostly local touristy.

Then in Riga, we explored the Āgenskalns area— the area across the Daugava River where most of the “real” people live. We took a free walking tour that took us to the Āgenskalns Market building, constructed in 1911 in the style of Latvia’s early 20th century Rational (textural rather than ornamental) Art Nouveau (and later explored the city center where nearly one-third of the buildings were built in various Art Nouveau styles). Interestingly enough, on our tour were two women who lived in the Āgenskalns neighborhood and wanted to learn more about it. 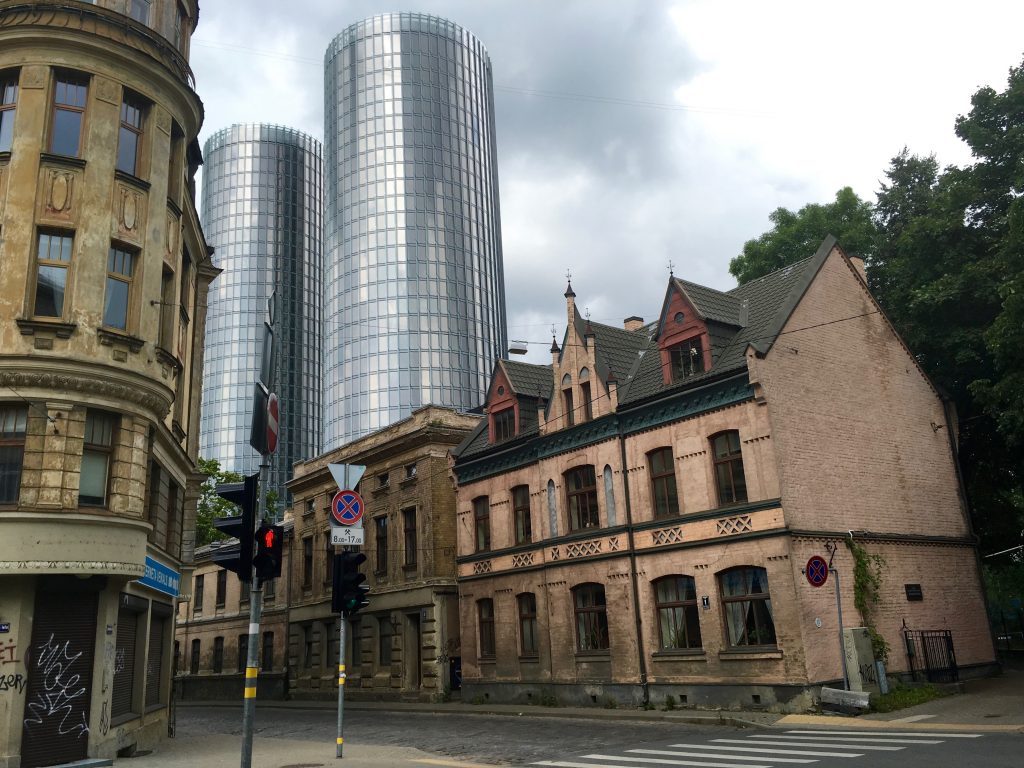 Āgenskalns — a study in contrasts

When we took a local train out to the beach at Jurmala, we were delighted as we watched families lovingly playing with their children both in and out of the cold Baltic water (no we did not go swimming). 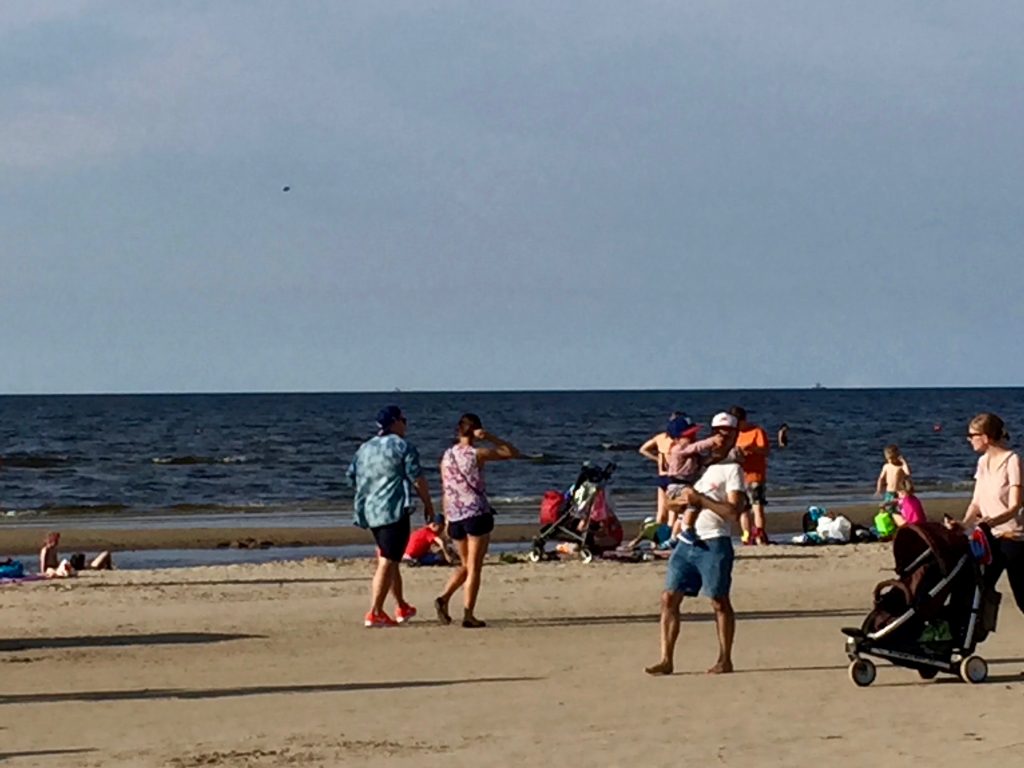 Down by the sea

In Vilnius, instead of just exploring outside the old town,, we explored its past as well. Before World War II, the Lithuanian Jewish population was around 160,000, about seven percent of the total population. But in Vilnius the Jewish population was nearly 100,000, about forty-five percent of the city’s total. The Jews of Lithuania had their own distinct and highly developed Jewish culture and played a significant role in many Jewish movements, including the Jewish workers’ movement, Zionism, and rational religious thought. There were over 110 synagogues and ten yeshivas in Vilnius alone. Its Jewish influence until the 20th century had led to it being described as the “Jerusalem of Lithuania” and Napoleon named it “the Jerusalem of the North” as he was passing through in 1812. 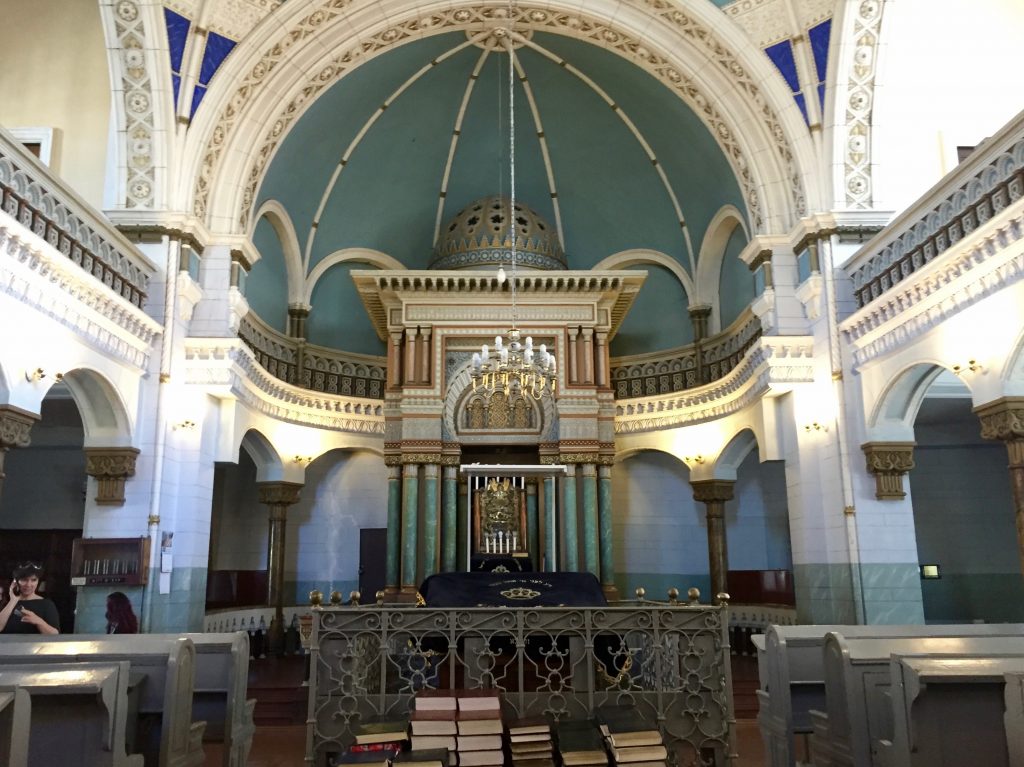 The Holocaust in Lithuania resulted in the near total destruction of Lithuanian Jews with more than ninety-five percent of Lithuania’s Jewish population massacred over the three-year German occupation — the most complete destruction of the Jewish population of any country during the Holocaust — largely because of massive collaboration in the genocide by the Christian locals. The reason for that, as the widely accepted story goes, was the occupying Nazi German administration fanned antisemitism by blaming the Soviet regime’s recent annexation of Lithuania, a year earlier, on the Jewish community. This self delusion ignored that the Nazis had done the same kind of thing in other countries where it had not generated the same level of enthusiastic support.

We took a tour of what was left of the Jewish Vilnius and our guide talked about the Vilnius Great Synagogue restoration project and the dismantling of a Soviet-built generator station built from Jewish headstones. Last year, Lithuania’s then chief rabbi urged the country’s Evangelical Reformed Church to remove Jewish headstones being used as stairs to a Vilnius church that were installed when Lithuania was part of the Soviet Union. It seems amazing to me that seventy years since the Holocaust, and twenty five years after Lithuania’s independence from the Soviet Union, that the church hadn’t decided to do it on its own.

I really liked Vilnius. Although not as “cute and cuddly” as Riga and Tallinn — it was a little edgier — it appealed to me, although perhaps it was the edginess that did it.

So here I was feeling all warm and fuzzy about Lithuanians, appearing that its horrendous past of anti-Semitism and its role in the Holocaust was being addressed, I was jerked back into reality by the back of my collarless t-shirt.

The day before we were to leave for Georgia, we decided to visit the Museum of Genocide Victims, established in 1992 and located in the former KGB headquarters and informally referred to as the KGB Museum. Until 2011 there was no mention of Lithuanian Jews at all, the rationale represented by the director was a lack of space and that they didn’t have any exhibits on the subject (of course they seemed to be able to create exhibits on the “Lithuanian Genocide”), and after all, the Gaon Jewish Museum just down the street already had an exhibit on the Holocaust (and wasn’t that good enough). It’s mission, its defenders argue, is to collect and exhibit documents relating to the 50-year occupation of Lithuania by the Soviet Union, the Lithuanian resistance, and the victims of the arrests, deportations, and executions that took place during this period.

It wasn’t until October 2011, in response to international pressure, that a single solitary cell in the basement was added, yet still unannounced on the main floor, that distorts the Lithuanian Holocaust. The museum itself actually glorifies (as “rebels” and “freedom fighters”) the right-wing paramilitaries, who a week before the Nazis invaded Lithuania, started the extermination of Lithuanian Jews, affording them the status as national heroes in their fight for Lithuanian freedom from the Soviet Union.

One of the city’s tourist information plaques on history, mounted on a pole outside the museum, correctly describes the building’s cruel NKVD/KGB history, but omits mentioning that it was also Gestapo headquarters during the Holocaust, where the genocide of some 100,000 residents of the Vilnius area was coordinated.

I guess the Jews aren’t real Lithuanians at all.

As I tried to figure that out I came across a 2012 article explaining that the remains of Juozas Brazaitis, the prime minister of Lithuania’s 1941 puppet government, the one who had ordered the extermination of Lithuanian Jews a week before the Nazi’s invaded, and who died in the United States in 1974, was ceremoniously re-interred in the Church of the Resurrection in Kaunas and en route, honored in Vilnius.

After protests, the mayor of Kaunas, Andrius Kupcinskas, who headed the committee that approved the move, said in response that every state leader must be given certain state honors and the provisional government of Lithuania was trying to return statehood to Lithuania — and Juozas Brazaitis’s attempts were noble.

Maybe it’s time for us to honor state leaders Hitler and Stalin who believed their attempts were noble as well.

When we had been in Eastern and Central Europe the year before, where you can’t escape the Holocaust and World War II, George Santayana’s famous admonition “Those who do not remember the past are condemned to repeat it” is a popular reference. I had some qualms about the idea then, but in Lithuania it finally dawned on me that Santayana was an optimist.

Remembering is not enough to stop the continuos slaughter of innocents (witness the number of genocides since the Holocaust). As important as remembering the past, is what version of the past you choose to remember … and nationalism seems to trump rationality every time.