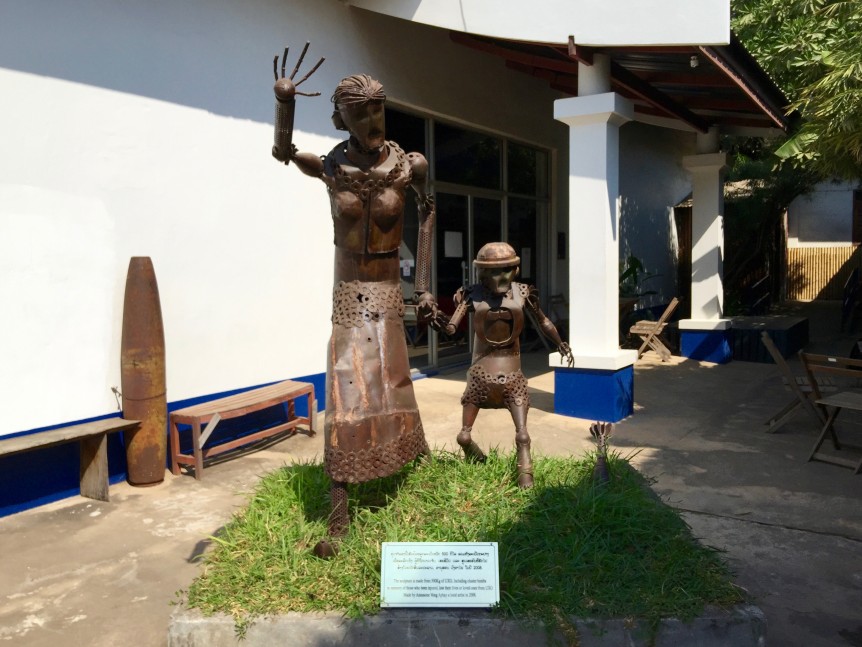 While it has been over for more than fifty years, the secret war in Laos created a legacy that the people of Laos are still living with every today.

When we got to Laos it was a quiet place, and a minor, if not non-player, on the world stage. In 2014, the GDP per capita was $5,006 making it 130th in the world according to the International Monetary Fund (2014), putting it behind, Vietnam, Uzbekistan, Timor-Leste, and Samoa; but ahead of Moldova, Tonga, Nicaragua, Myanmar, and Pakistan

But it wasn’t always like this. While it has always been a poor country, from 1964 to 1973 Laos was a pawn in the cold war chess game, and to signify its importance, the U.S. dropped more than two million tons of ordnance on Laos during 580,000 bombing missions — or a planeload of bombs every 8 minutes, 24-hours a day, for 9 years – making Laos the most heavily bombed country per capita in history. In terms of tonnage, there were more bombs dropped on Laos than during all of WW II.

The bombings were part of a U.S. Secret War that had two objectives. One was to obliterate the Ho Chi Minh Trail — a supply route for the North and South Vietnam Fighters in South Vietnam. The other was to support the Royal Lao Government fighting the Communist Pathet Lao (the old Domino Theory at its finest) during the Laotian Civil War from 1953 to 1975, turning a local issue into a proxy war between the global Cold War superpowers.

It was secret for a number of reasons, one of them being that the U.S. signed an agreement that made Laos neutral and the U.S. Central Intelligence Agency (CIA) wanted to achieve its goals without direct military involvement. So the U.S. Air Force (secretly) heavily bombed both the Ho Chi Minh trail and the Plain of Jars in northern Laos and other areas where the supposed North Vietnamese and Pathet Lao communist forces were hiding.

While the bombing did displace hundreds of thousands of Lao civilians during the nine-year period, neither of the U.S. objectives was reached. In fact, the bombing likely increased support for the Pathet Lao — another series of missteps in our foreign policy that still continues today. But what it did succeed in doing was create a legacy that the Lao people are still living with today.

During the estimated 580,000 bombing missions flown over Lao PDR between 1964 and 1973, over 270 million cluster bombs were dropped on Laos, but up to 80 million (30%) did not detonate, leaving Laos contaminated with vast quantities of unexploded ordnance (UXO) — mostly “bombies” which are the bomblets or submunitions from cluster bombs.

Currently, less than 1% of the UXO have been destroyed — and more than half of all confirmed cluster munitions casualties in the world have occurred in Laos. Each year there are new casualties in Laos (the exact number can’t be determined because many of the accidents occur in rural Laos and go unreported), but most estimates are about one per day. Close to 60% of the accidents result in death, and 40% of the victims are children. While there has been a sustained effort to educate children and adults about the danger of cluster bombs, many people on a daily basis continue to come into contact with UXOs and cluster munitions. 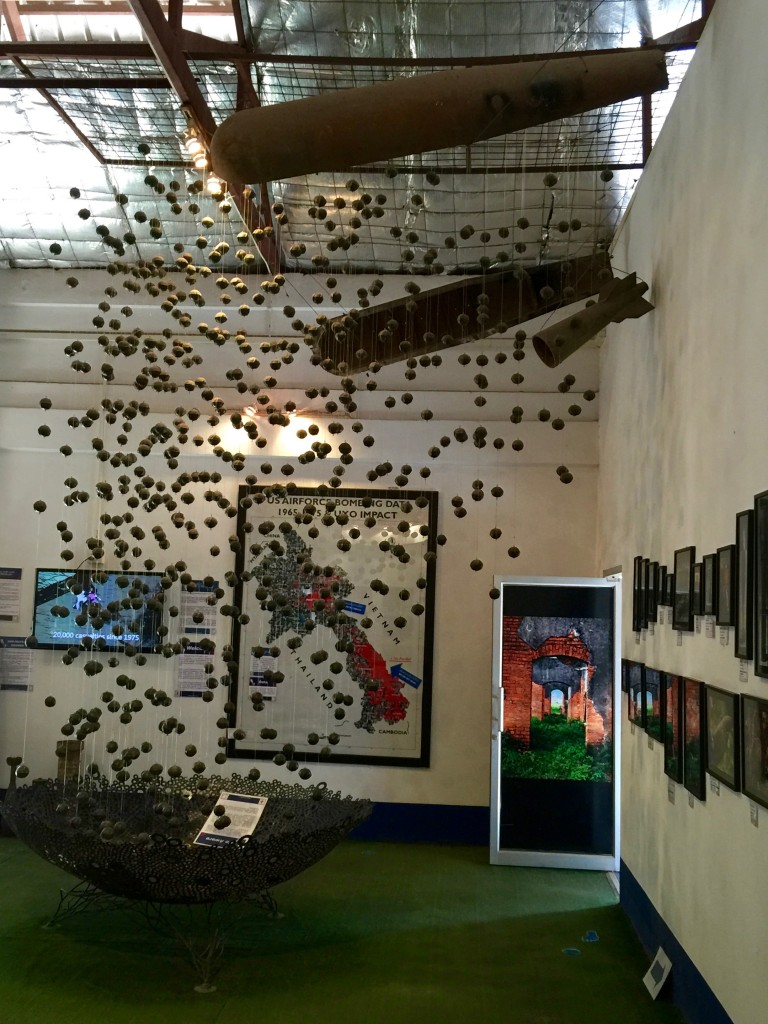 What a cluster bomb does

Bombies are only about the size of a tennis ball, but they’re deadly, and when they are on or in the ground, they are incredibly difficult to see. But the danger is not only in accidentally stepping on one, some of the kids (and adults) go looking for them. The unexploded ordnance is worth money as scrap metal, so people take the risk of hunting for bombs to support their families. Our guide, who had come from a very poor village said that he had once found a bombie, and since they had no toys he told us, they turned it into one.

The countryside looks peaceful now. But imagine what it’s like to be a farmer here, ploughing and planting land that’s contaminated by bombs. We saw a horrifying exhibition on UXO and cluster bombs at COPE Visitor Centre in Vientiane (Cooperative Orthotic and Prosthetic Enterprise), which was formed in 1997 in response to the need to provide UXO survivors with orthotic and prosthetic devices. There were also two videos that anyone with any degree of social consciousness should see. The first Laos Free by Cory Sheldon and the second on the cleanup efforts Bomb Harvest that follows an Australian bomb disposal specialist, training locals in the skill of detonating bombs while trying to stop villagers, particularly children, from finding them and using them for scrap metal or as toys. It was a heartbreaking experience to see the stories of people who were directly affected by it. 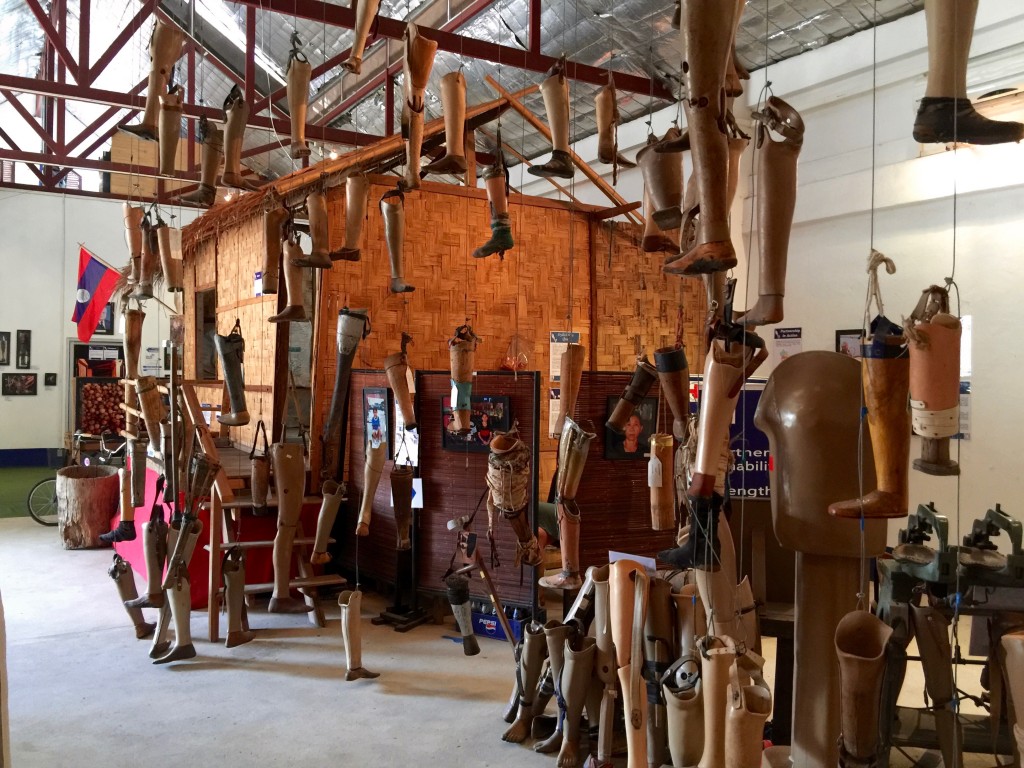 The story of the the bomb victims — mostly children

One of the significant issues facing Laos today is removing the unexploded cluster munitions scattered throughout the country. It’s a daunting task, and at the current rate, It is going to take many, many years (decades really) to complete.

We saw this first hand as we explored the Plain of Jars, a marvelous megalithic landscape in Laos that dates from the Iron Age (500 BC to 500 AD) and is one of the most important prehistoric sites in Southeast Asia. There were stone markers for deactivated bombs, which for one reason or another couldn’t be removed from under the ground. 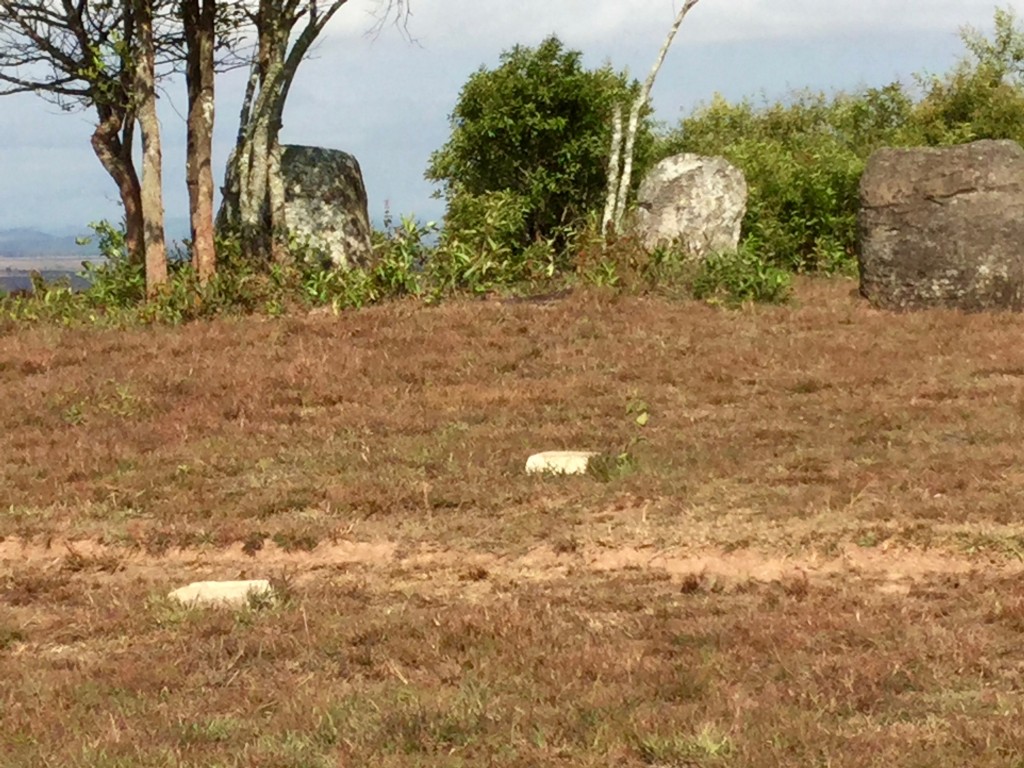 Unexploded boms on the Plain of Jars

We then went on to Viengxay in Houaphanh Province of North-Eastern Laos where there is an extensive network of caves in limestone mountains — 480 of them used by the Pathet Lao to shelter themselves and local villagers from American bombing. Up to 23,000 people lived in the caves, which contained a hospital, a school, Pathet Lao offices, bakeries, shops, and even a theatre. Farmers had to farm at night to avoid bombing raids.

We learned even more about the secret war, at the MAG visitor center in Phonsavanh (Plain of Jars site 1), and later at the Luang Prabang UXO center. In Bombies, a 15-minute video, four young victims tell the story of their bomb accidents and describe the struggles they face today. It brought us both to tears. 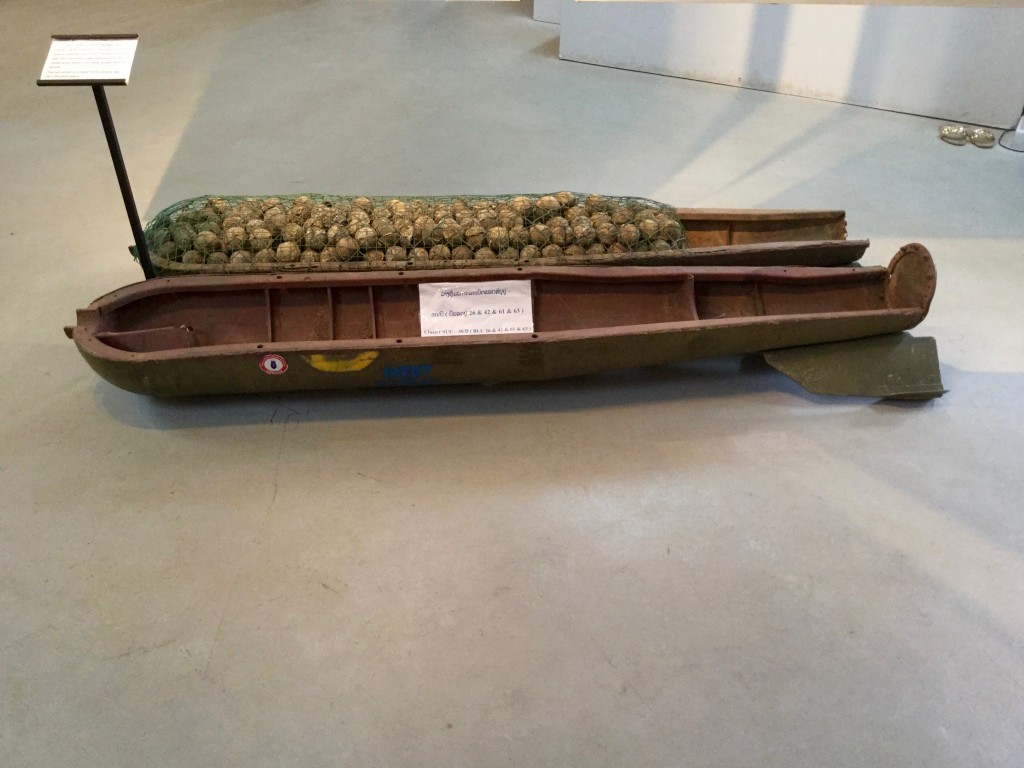 This is your cluster bomb

Just as disheartening is the U.S. response. While the U.S. spent 13.3 million dollars a day (in 2013 dollars) for nine years bombing Laos, between 1995 and 2013, the U.S. contributed on average only 3.2 million dollars a year for UXO clearance in Laos. Doing the math, the U.S. spent as much in three days bombing Laos ($51M, in 2010 dollars) than it spent for clean up over 16 years ($51M). While that figure has now increased to twelve million dollars, it is still not enough, and it’s not secure. Every year the lobbyists have to go back to Congress to keep the funds flowing.

There is also the issue of corruption. We heard from more than a few people that the Laotian government gets the money and skims a large percentage. They also complain that the government doesn’t help bomb victims. While we couldn’t corroborate this, based on other things we learned about government support for the Lao people who live in the countryside, those claims do seem plausible.

To add even more insult to injury, the U.S. has still not joined the 118 countries that signed the Convention on Cluster Munitions, agreeing to ban the use of cluster bombs.

As we traveled around Laos, we were struck by how beautiful it was and, despite everything that has happened to them, how warm and welcoming the people were — making the tragedy of the secret war even more heartbreaking.