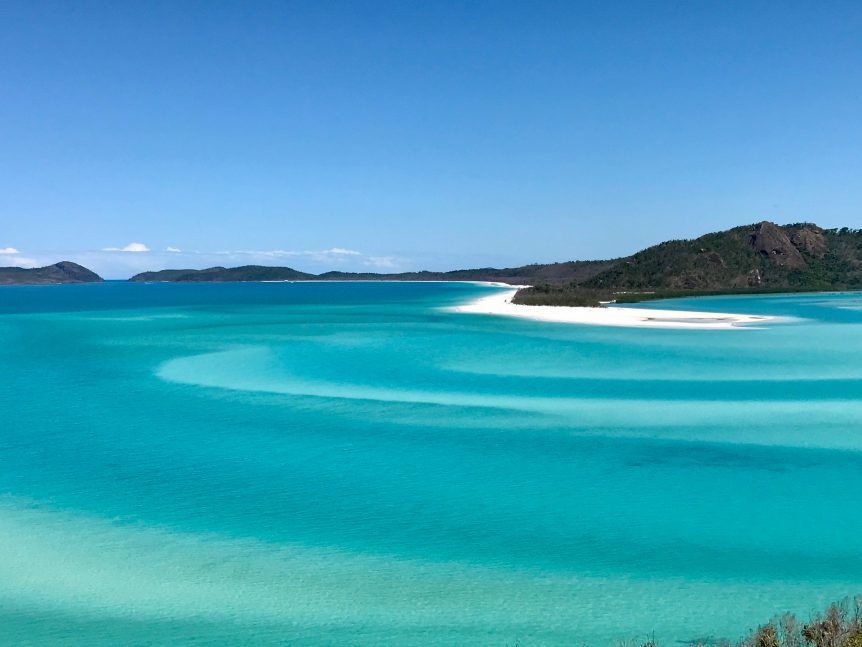 We were so smitten with Australia it is hard to write about our time there without sounding like a Chamber of Commerce travelogue.

There was Brisbane, a charming city with a marvelous ferry system on its lifeblood, the Brisbane River, that winds its way through the city. 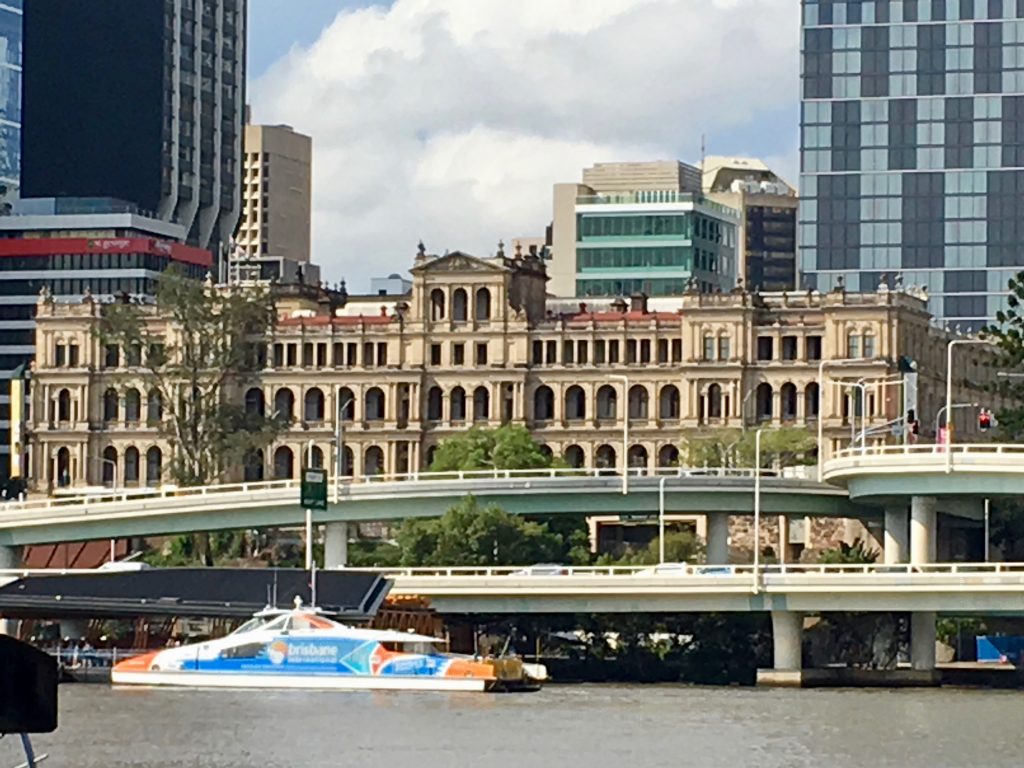 The CityCat runs up and down the river

It has one of the best outdoor spaces we have seen, with walking tracks and gardens, and a beautiful 2,000 square meter constructed beach — perfect for the warm summer days. 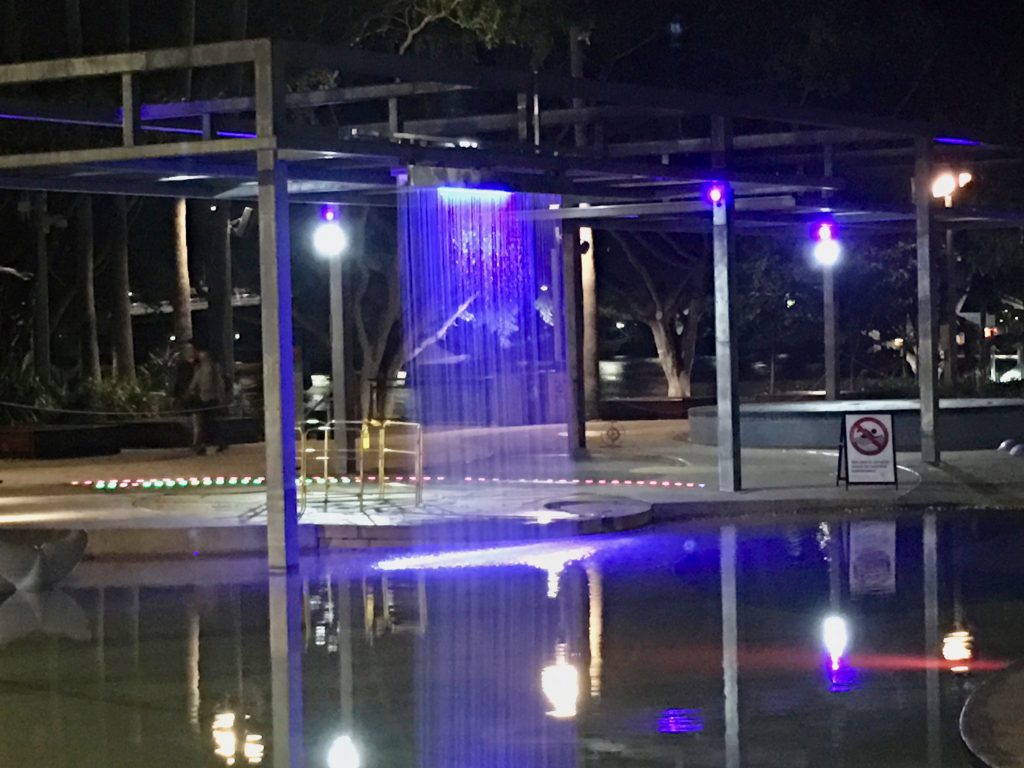 At night on the South Bank beach

There was Sydney with its marvelous beaches, a concert in its iconic opera house, and a great sculpture walk along Bondi beach. 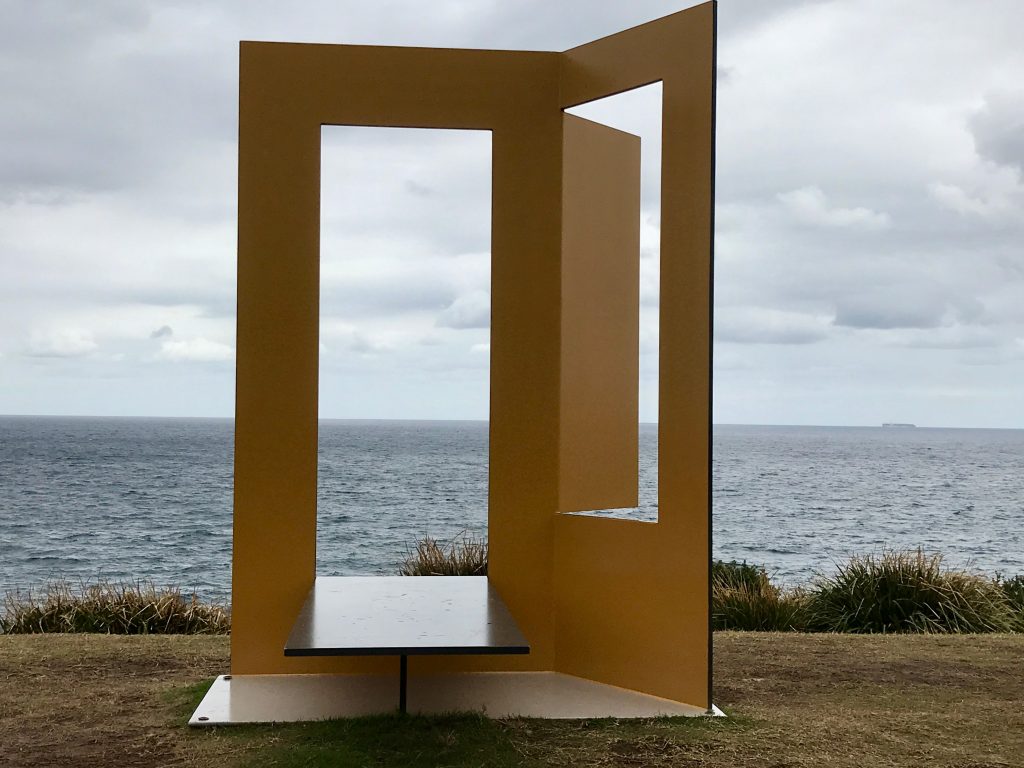 Sculpture by the Sea on the Bondi Beach was marvelous, even in the rain

There were the cool animals, 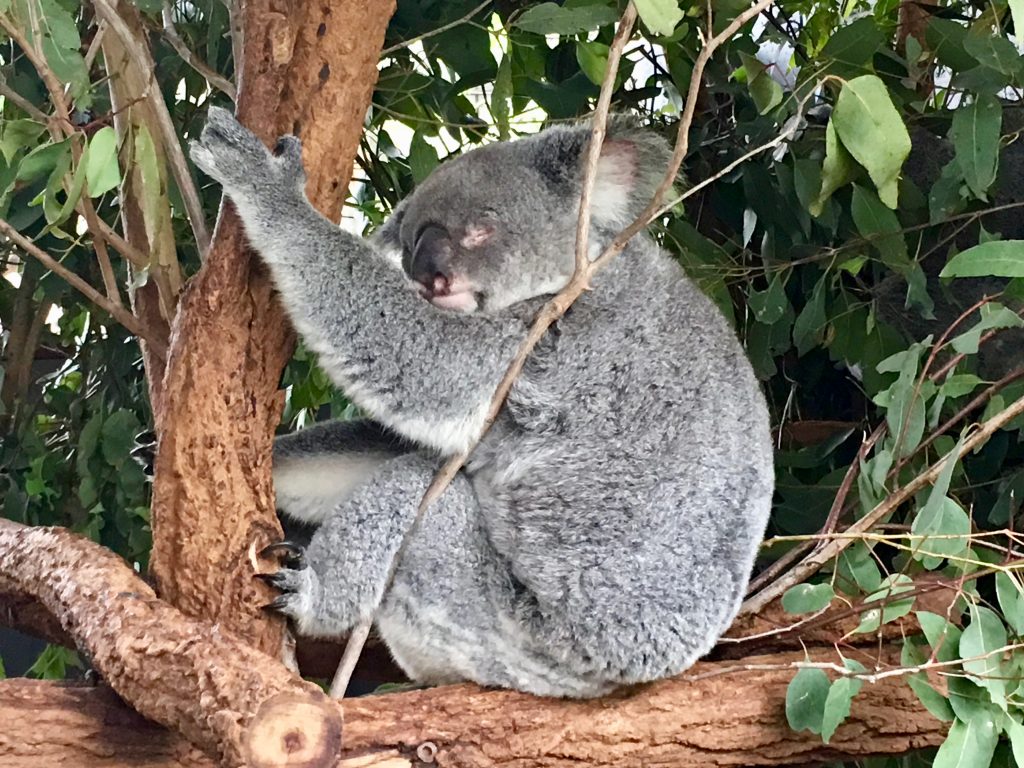 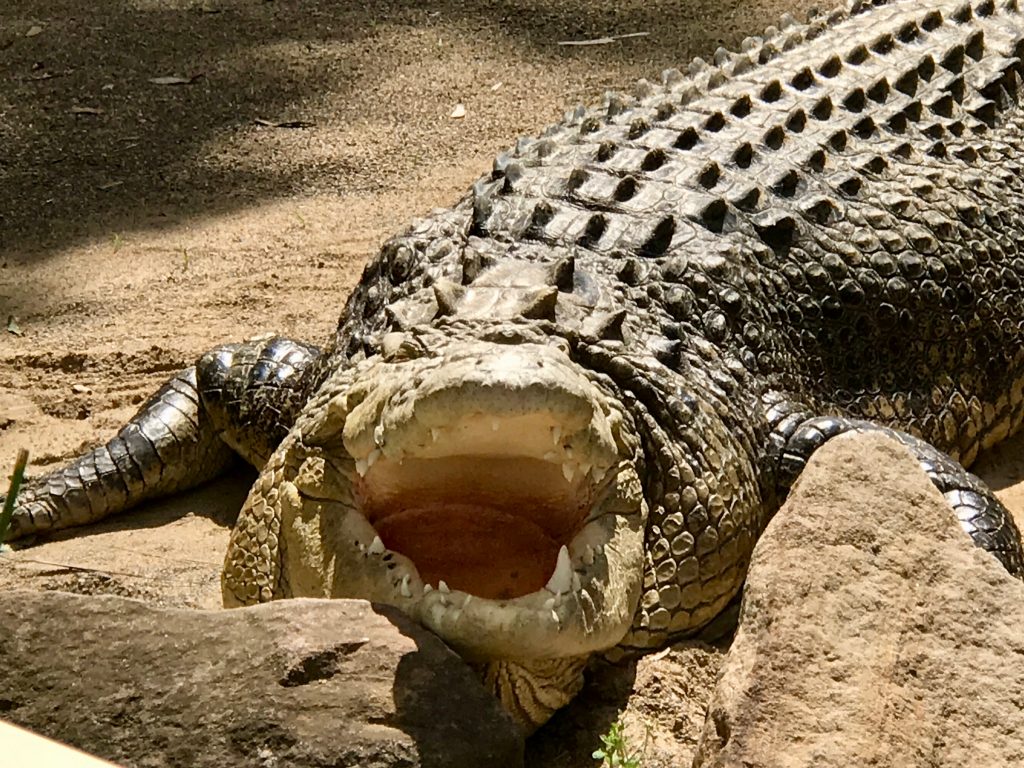 All the better to eat you with 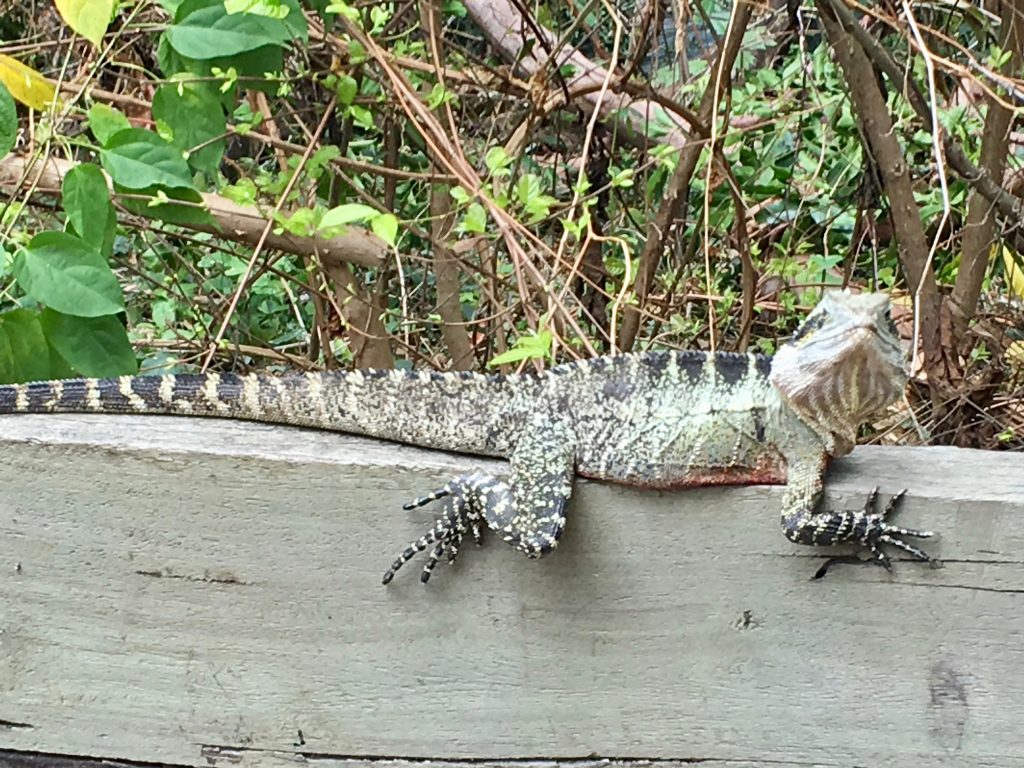 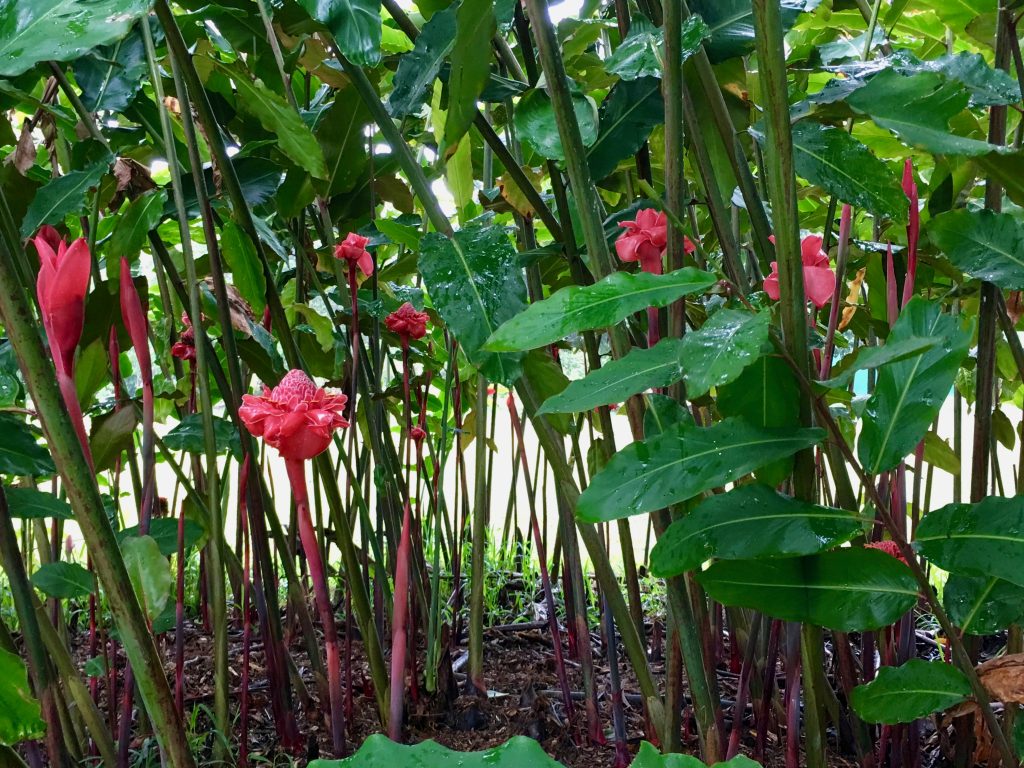 The incredible beauty of the rainforest 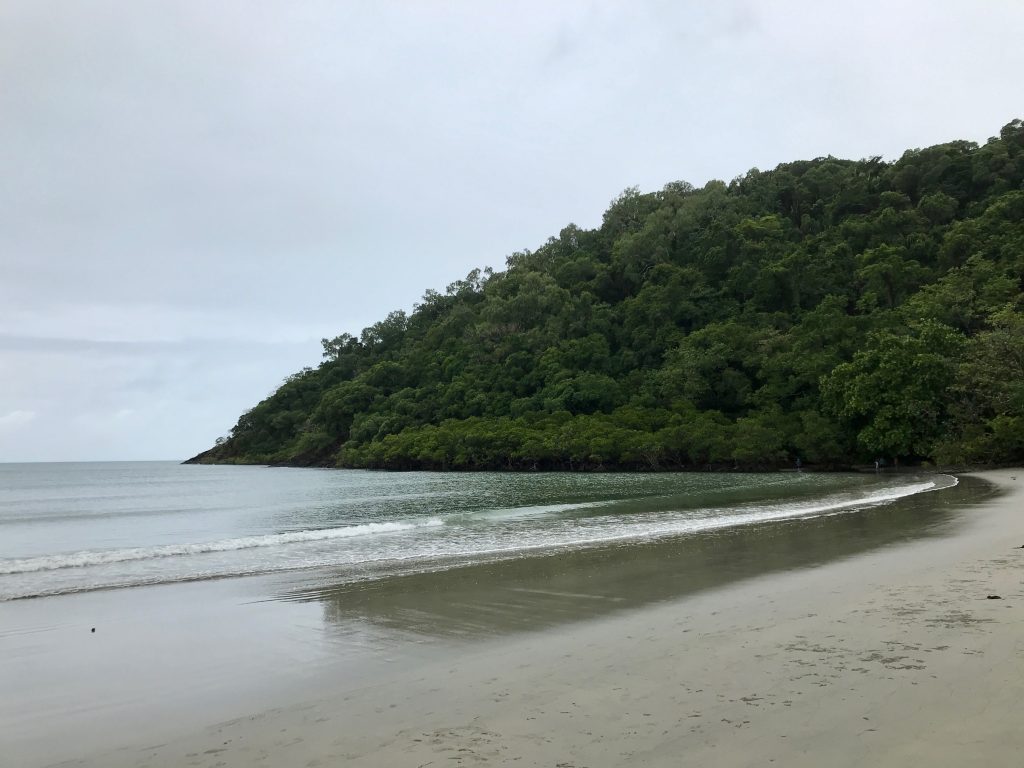 … and snorkeling on the Great Barrier Reef at Port Douglas, the Whitsundays, and Lady Elliot Island (and where I finally realized I much preferred being on the water rather than in the water). 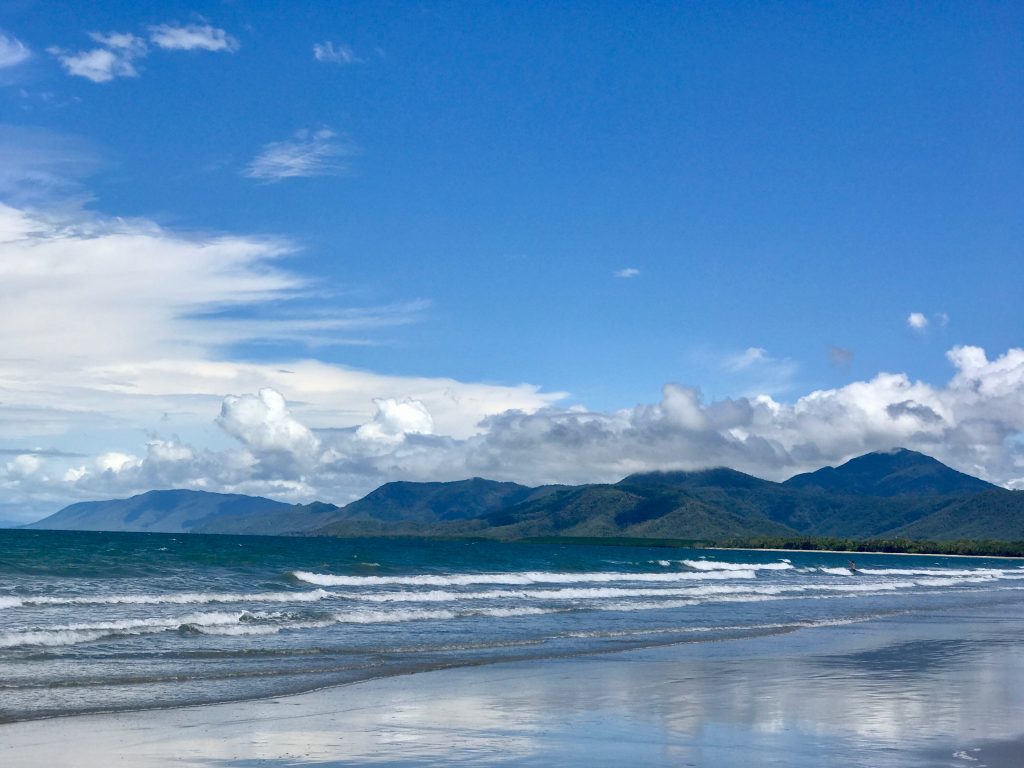 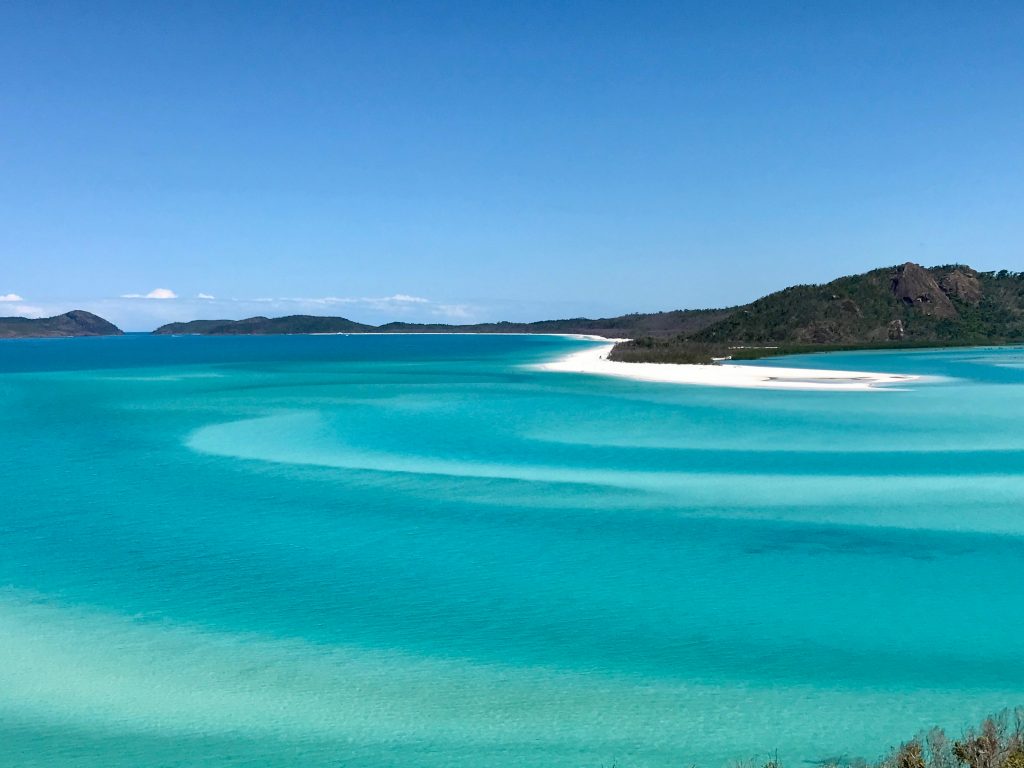 Whitehaven Beach in the Whitsundays, one of the most beautiful beaches we have ever seen 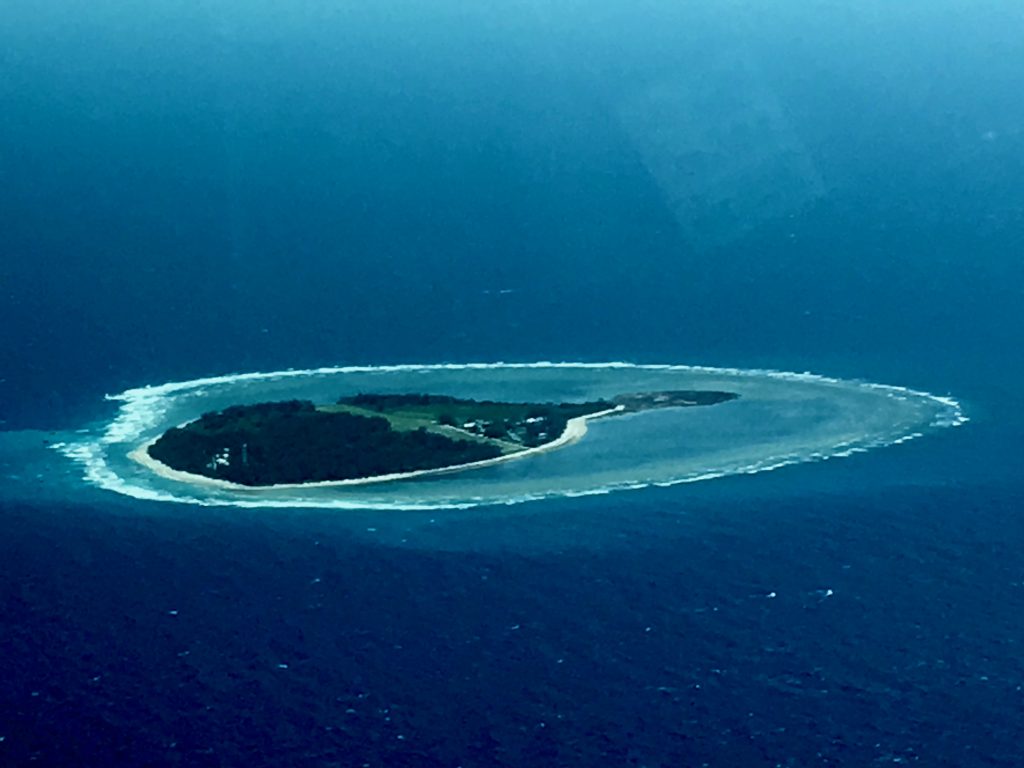 We flew into Lady Elliot on a small plane 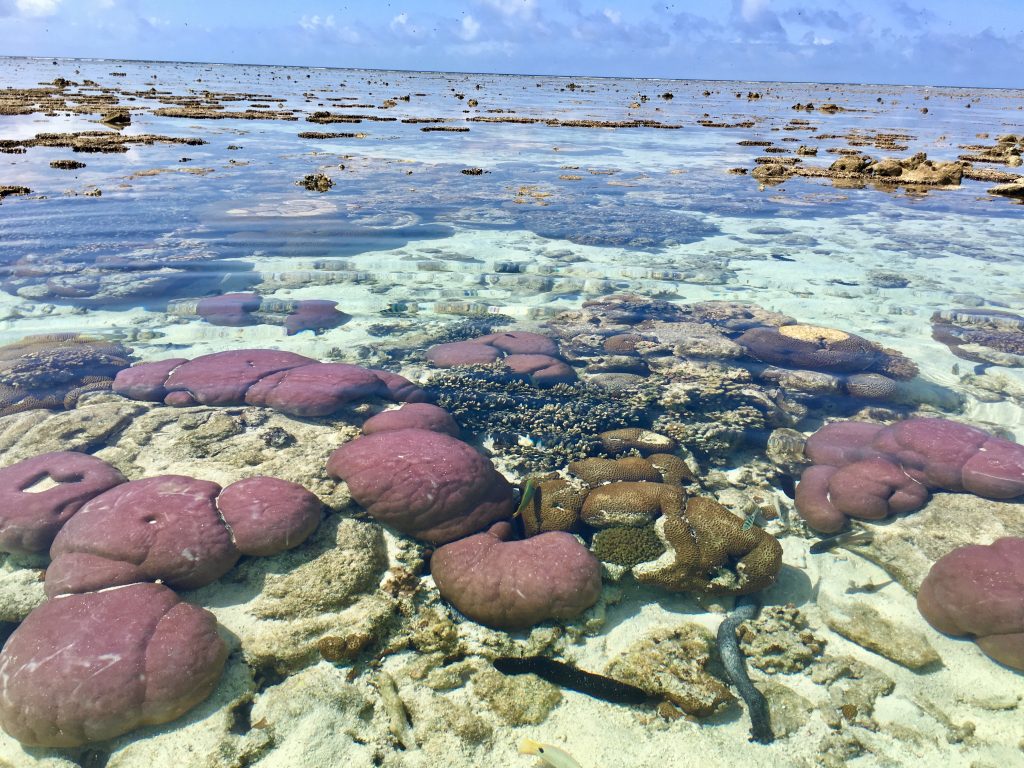 Lady Elliot is part of the Great Barrier Reef 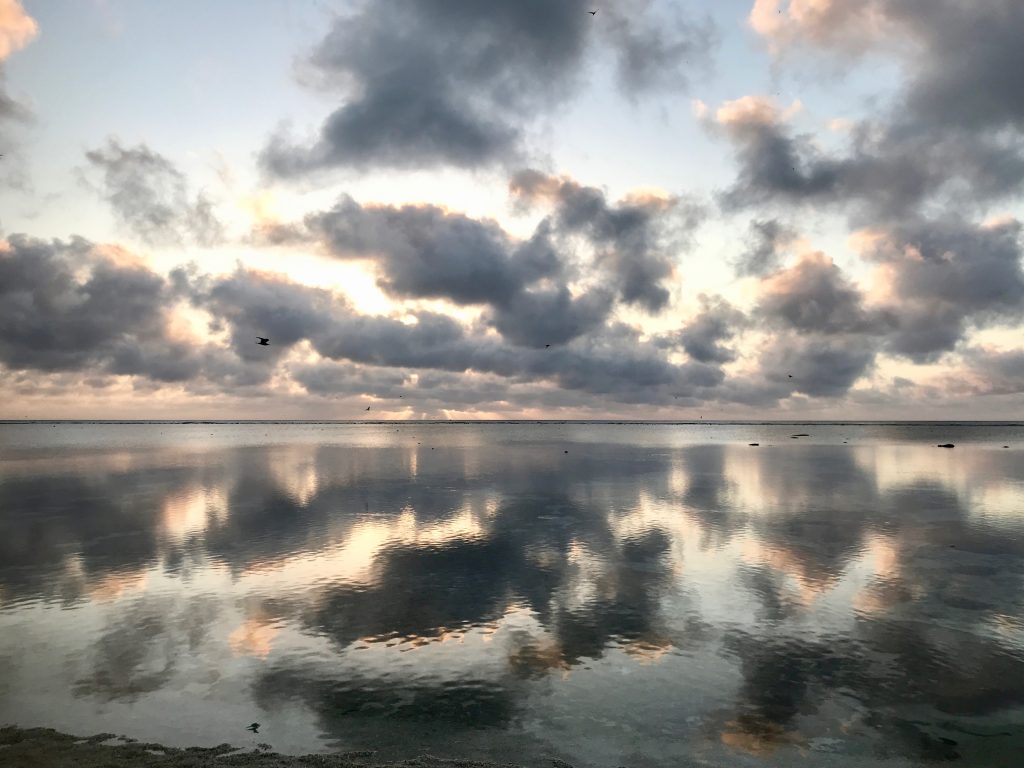 The perfect end to a perfect day

But the people we met were as spectacular as the natural beauty, and often more so. Although we had met some interesting Australians as we traveled in other countries, I was still trapped by the sound bite-based stereotype of a raucous, Fosters drinking, outdoor barbecuing, wild western, surfer dude Australian. It didn’t take long before I was disabused of that notion.

There was Angela, a flight attendant, who, when she discovered we were (foolishly) starting our drive from Adelaide to Melbourne after our afternoon landing on a flight from Uluru/Ayers Rock, packed us up with snacks and water and some very sage advice.

There were Pozz and Cath, who we met in an ice cream store in Brisbane, and who later had us over for dinner and then insisted we stay with them for a few days on our way back from Port Douglas on our way to Sydney (and last month we did an incredible Sailing Adventure with them in Croatia and Montenegro).

There was Craig, the owner of our Airbnb in Port Douglas, who invited us along for a sunset sail.

There were Sandra and Scott, owners of our Airbnb in Noosa who took us to dinner at an excellent Japanese restaurant.

But besides all the wonderful people we met, all the natural beauty we experienced, and all the fun we had, there was another side to this trip. One reason we had sold our house and started traveling was to expand our understanding of the world in the spirit of George Bernard Shaw’s “Life isn’t about finding yourself. Life is about creating yourself.” We wanted to get a global picture of what the world was like beyond media sound bites, and discover some of the patterns that weave through past and present, and connect the cultures of the world. We were assembling a jigsaw puzzle — one where you had to find the pieces first — and in Australia we added one more piece to the puzzle.

When we first met Pozz and Cath in Brisbane, they were with some friends, and one of them told us we had to visit the Douglas MacArthur Museum in Brisbane. We were at first dubious; we had come to Australia for its natural beauty, for Linda to indulge her snorkeling passion, and for me to see the Great Barrier Reef before it died. But she was so passionate about it that we decided to go.

While we had learned about WWII in Central Europe, and about the Japanese role in Thailand, we knew little about the war in the Pacific, much less the perspective from the Australian side.

But Linda’s father had been stationed north of Brisbane, and the war in the Pacific had some personal meaning. We had some free time in Brisbane, and one day we wandered over to the Museum (actually, it was more than just wandering since the museum is open to the public only on Tuesday, Thursday, and Sundays from 10 am to 3 pm, so it took some planning).

MacArthur’s office was preserved and on the 8th floor of a bank building in Brisbane. I had expected it to be in a dark basement, but it was there because, as we were informed, he had an ego and thought this room would suit (to be fair the roof above the 9th floor consists of two 30 centimeters deep concrete and steel slabs). Volunteers staff the museum, and after we went through it we came to a map of the war in the Pacific, and a volunteer who explained Australia’s role and the battles during WWII which ultimately led to the defeat of Japan in the South Pacific. This was far more interesting than the homage to MacArthur.

I knew nothing about the War in the Pacific, and frankly didn’t even give WWII much thought until we learned WWII was still front of mind in much of Central Europe. But here it was about the war with Japan. The Battle of the Coral Sea (May 4-8, 1942), a major naval battle between the Imperial Japanese Navy and naval and air forces from the United States and Australia, took place between Northeastern Australia (where we were) and Southeastern New Guinea. This was not only the first time aircraft carriers engaged each other, but was also the first time in which neither side’s ships sighted or fired directly upon the other.

While in terms of ships sunk it was a tactical victory for the Japanese, it was a strategic victory for the Allies because it was the first major Japanese advance stopped by the Allies. More important, Japan’s loss of two carriers significantly contributed to the U.S. victory in the Battle of Midway, and Japan’s severe losses at Midway then prevented them from reattempting to invade Port Moresby (in New Guinea) from the ocean, forcing them into an ill-fated land offensive. Two months later, the Allies took advantage of Japan’s resulting vulnerability in the South Pacific and launched the Guadalcanal Campaign and eventually broke the Japanese defenses in the South Pacific.

But more than that, what we learned in the Douglas MacArthur Museum was timely for Linda because it helped her understand what her father was part of during the war, and made a visit we were about to have even more meaningful.

Some backstory is in order here. This was our second trip to Australia in less than a year. On the first trip we had explored Adelaide, Uluru/Ayers Rock, and Melbourne, and had planned to go to Brisbane. But our trip was cut short because we had to return to the U.S. to help Linda’s mother move into assisted living.

This turned out to be fortuitous, because while we were helping Linda’s mom, in June a cousin of Linda’s got a message out of the blue, on Facebook:

Hi Mate, my name is Tim Hill from Yeppoon, Queensland Australia.
I am part of a group that detect and reunite WW2 dog tags that are found around Rockhampton Qld.
One of the latest tags was for a Henry Goldfine service number ########
His brother was Abe, siblings were Erwin, Manley and Sandra.
I believe Henry’s wife was Irene.
Would this by any chance be your uncle.
We would love to reunite that with family where it belongs.
Just so you know we are fair dinkum please have a look at my Facebook page.
American WW2 dog tags via Australia and back home again.
Thanks for any help.

I am embarrassed to say that our first thought was this was some sort of scam. But, after a bit of back and forth we gave him an address to send the dog tag to, and sure enough, he sent the tag as promised, without even asking for reimbursement for postage. So much for cynicism.

So having to postpone our trip to Brisbane turned out for the best because had we continued on our trip the previous spring, we wouldn’t have known about the dog tag. Since we were going to Queensland and would be driving right past Yeppoon on our way south from Port Douglas, we decided it would be nice to meet Tim and thank him personally. We would find a place to stay in Yeppoon and take him and his wife out to dinner.

But Tim would have nothing to do with that. He invited us to stay with them, and we did. He and Donna are lovely people, and we had a delightful evening with them. 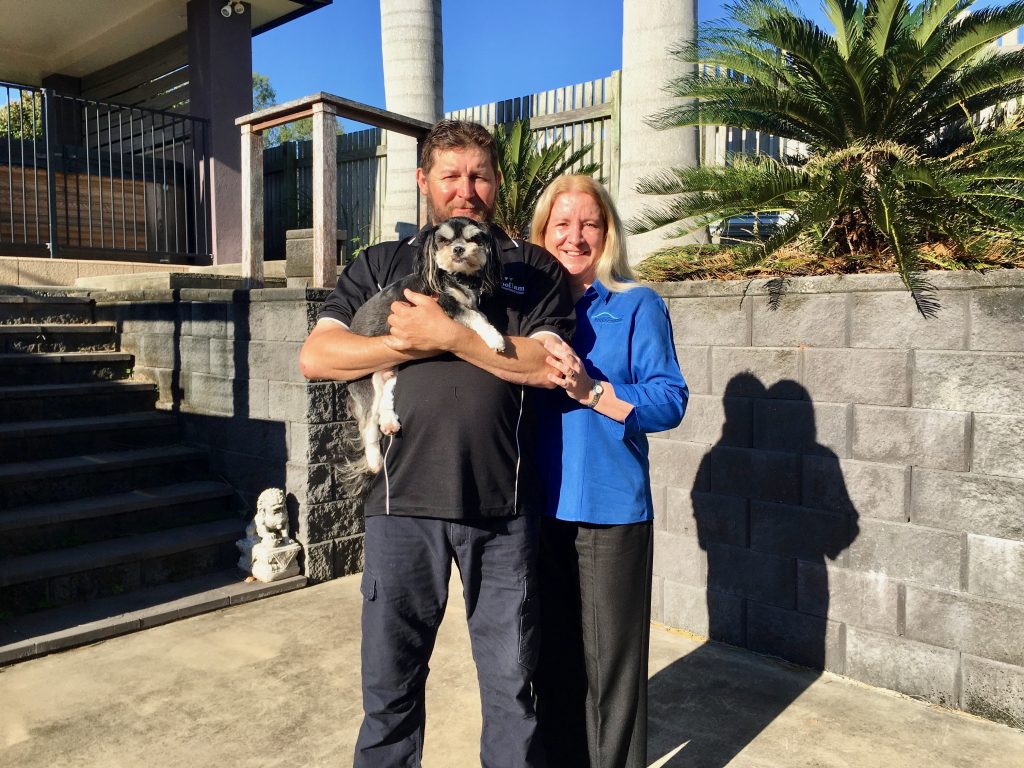 The next day was amazing. Tim hadn’t been the one to find the tag: it was his associate, Anthony, and he wanted to show us around the former American camp, and especially where the tag was found. So the next morning we packed up and followed Tim to the site of the former camp where we met Anthony, dressed in a WWII uniform, who took us on the tour of the site. 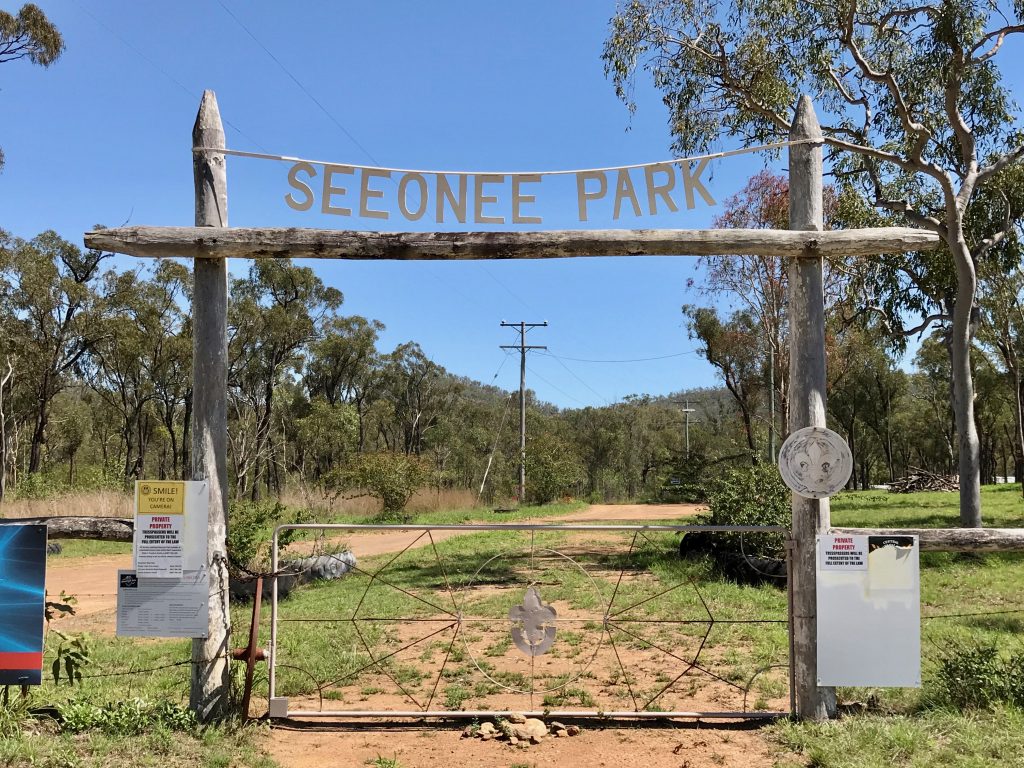 It turns out Linda’s father discarded his tag because he was issued a new one before he shipped out (to New Guinea we think) — one without the next of kin on it. The Army did that because, if a soldier were captured, the Japanese would not be able to communicate to the next of kin and offer payment options for better treatment. 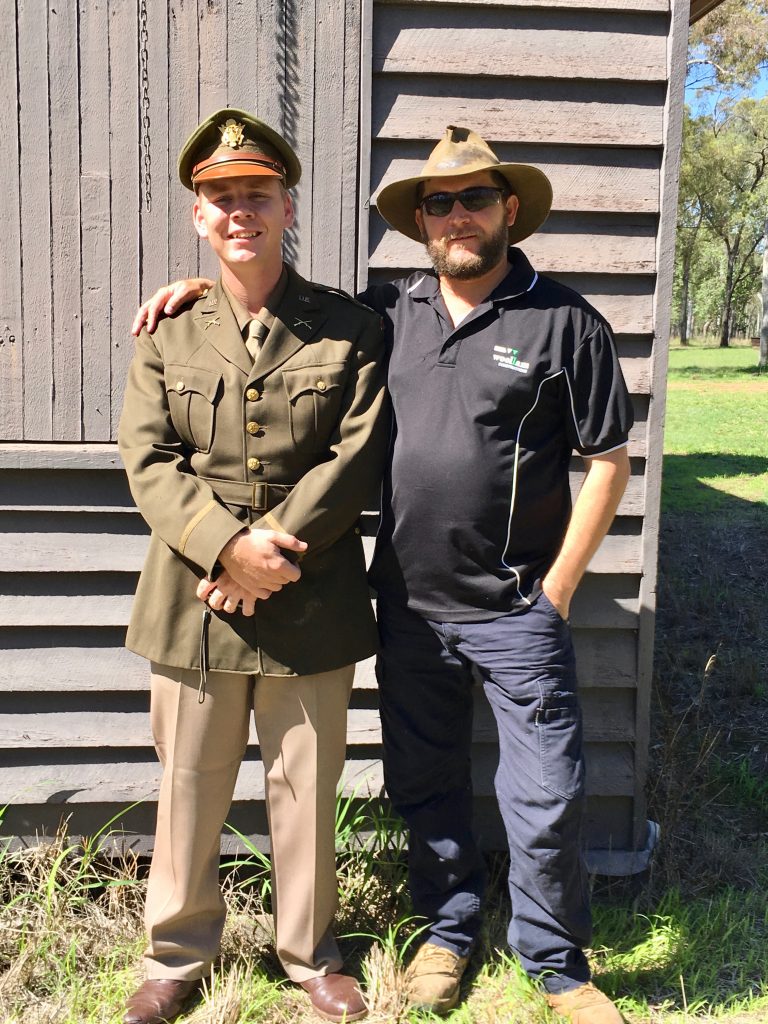 We drove around the 300-acre camp, tramped through the bush, and saw the artifacts that remained. But the most touching part was when they showed us the place where the tag was found. 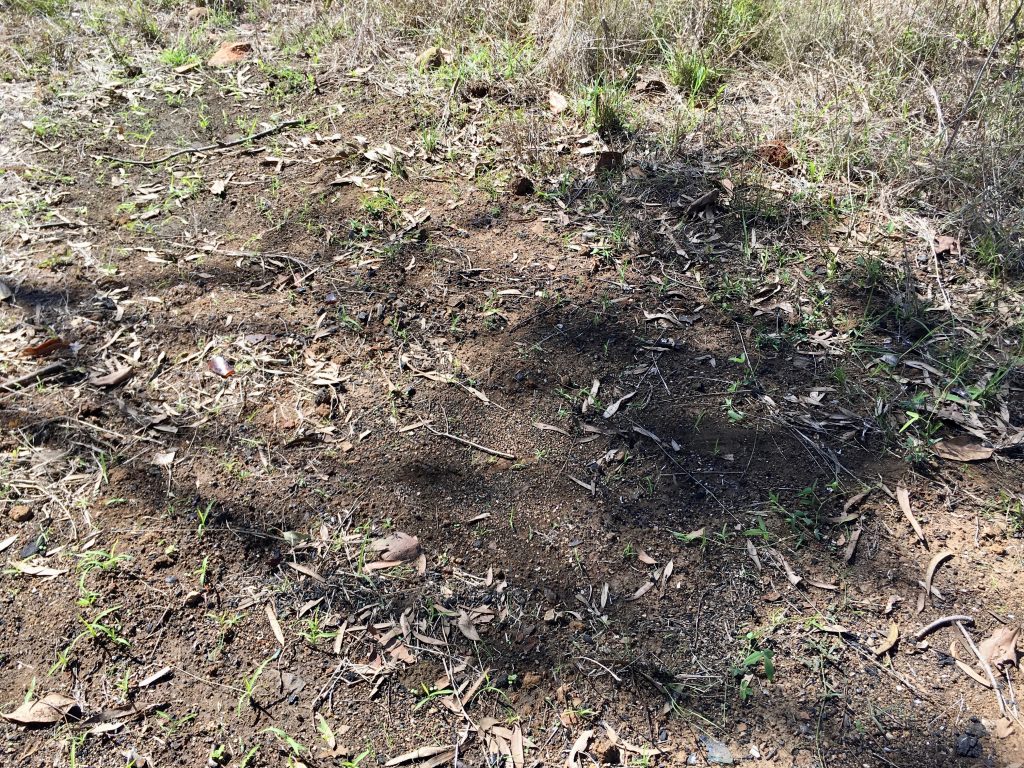 Where the tag was found 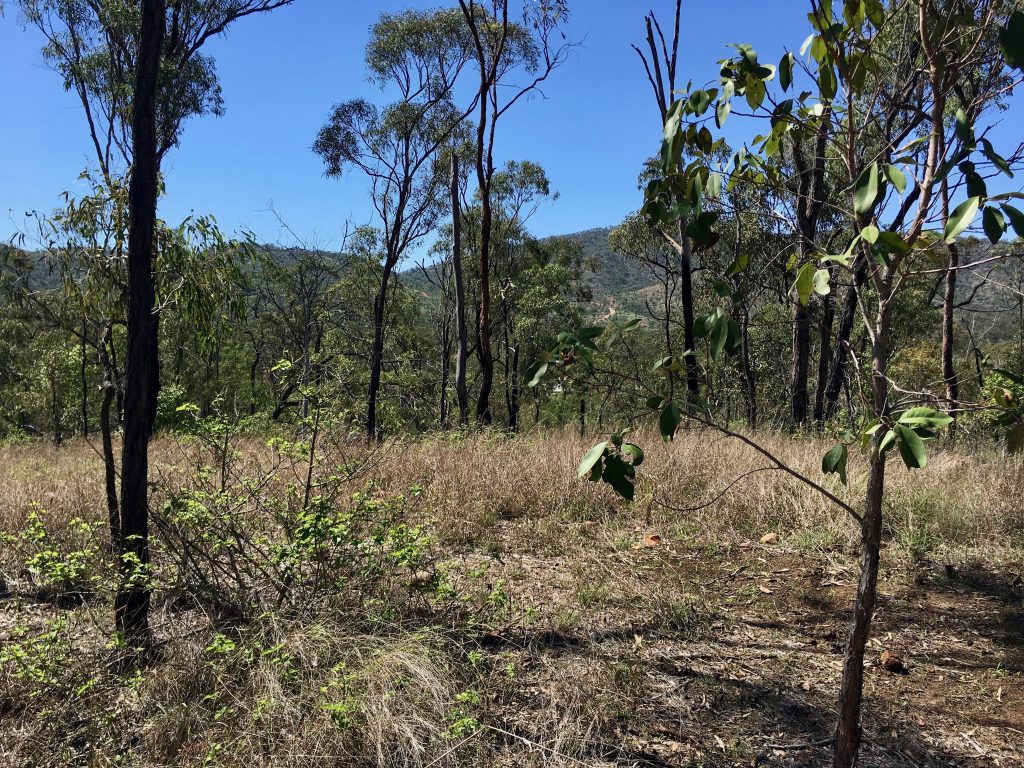 A view Henry would have seen

It was an emotional time for Linda: she was sharing some of her father’s past, making it an experience we both will never forget. And what made it even more poignant was that day was the 25th anniversary of her father’s death. But more than that, here were two people, who, out of the goodness of their hearts, worked to reunite the families of American soldiers stationed in Australia with a part of their past, and in one case a soldier himself (Tim had once flown to Portland to meet a 94-year-old veteran and give him back his dog tag personally). In Linda’s words to Tim and Anthony, “Your passion and sincerity really show, and I am sure you have made a lot of families very happy. I only wish that everyone in the world could know what you are doing—it would make for a better world. Thank you from the bottom of my heart.”

It is heartwarming to be reminded once again that, despite the attempts of politicians to push their agendas by stoking the fires of xenophobic hatred, there are still people around the world who can rise above it all and remain kind and generous.