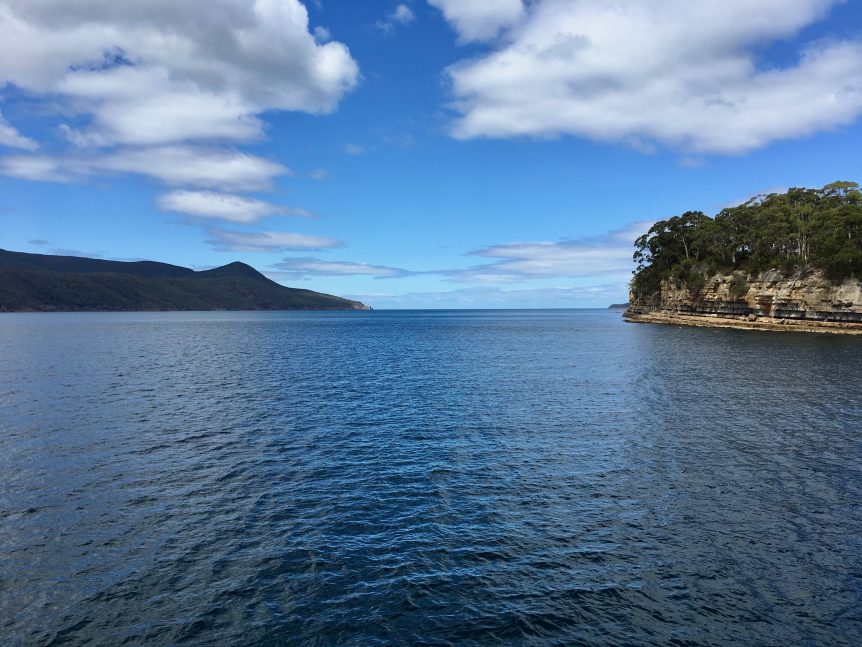 Yes, Tasmania is beautiful and interesting, and the people we met were delightful, but there is a dark background to all this beauty that you can’t, or shouldn’t, try to escape.

Most people are aware that Australia started life as a penal colony, where (mostly) the poor and unconnected were shipped for (mostly) trivial crimes. But for 35,000 years before the first convict set foot there, it was already inhabited by an indigenous population that became the victim of a British genocide. And even while Tasmania’s early history is about crime and punishment, there were free settlers who saw opportunity there  —land grants for stolen indigenous people’s land and the free labor provided by convicts. To understand Tasmania you have to understand all three, and their relationship to each other.

Before the American Revolution, America was the convenient dumping ground for Britain’s convicts. After 1788 the Australian colonies became the lucky recipients, and in 1803 the state of Van Diemen’s Land was created (now Tasmania), both to dump prisoners, and to prevent claims to the land by the First French Empire during the Napoleonic Wars.

Around 75,000 convicts were sent there, with one in five a woman, along with quite a few children transported with their parents. Most were poor young people from rural areas or big city slums. Many (but not all) crimes were trivial by our standards — mostly stealing small articles— and as we visited some of the prison ruins, we noticed quite a few sentences of 7 or 14 years. But even 7 years was in effect a life sentence. Very few made their way back to England, and realistically what was there for them to go back to? Convict dumping ended in 1853, and the colony was renamed Tasmania in 1856, partly to separate the growing colony of free settlers from the island’s convict past.

And the most difficult convicts (mostly re-offenders) were sent to the Tasman Peninsula prison known as Port Arthur, and now officially Tasmania’s top tourist attraction.

It was an inhuman time. Van Diemen’s Land was a brutal place and Port Arthur was the cruelest of the cruel. 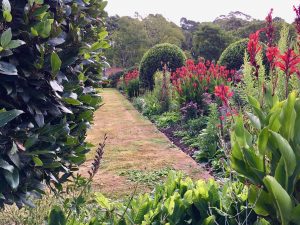 There were beautiful gardens in Port Arthur

Port Arthur was established in the 1830s as a penal settlement, but now looks like a park with a few ruins scattered here and there, and with some of the other buildings turned into shops. Most of what we learned there was not based on what we saw (there’s not much to the ruins), but on the narration of the guide. In reality, a trip to Port Arthur is sort of like a day in the country, and it has become a wonderful revenue source.

More than a penal colony, Port Arthur was an industrial center — industrial ship building, shoemaking, smithing, timber, and brick making. By the 1940s the convict population reached over 1100, and the industrial and penal nature of the settlement was consolidated. Port Arthur was also home to juvenile convicts, some as young as nine years old. While they were separated from the main convict population, like the adults, the boys were used in hard labor such as stone cutting and construction.

What made Port Arthur so horrific was that from 1833 until 1853, Port Arthur was a laboratory for Jeremy Bentham’s theories about crime and punishment, and the model for many prison reform movements. There was a shift from physical punishment to psychological punishment — corporal punishment only hardened criminals and did nothing to turn them from their immoral ways. Instead, well-behaved prisoners were rewarded with better food, while troublemakers received only the bare minimum of bread and water. Part of this enlightened approach was the hooding of prisoners and the requirement for silence. In the infinite wisdom of prison reformers, this would give the opportunity for the prisoner to reflect upon the actions which had brought him there.  It shouldn’t surprise anyone that instead of redemption, the lack of light and sound drove some of these prisoners mad. So an asylum was built right next to the prison to house these poor souls. 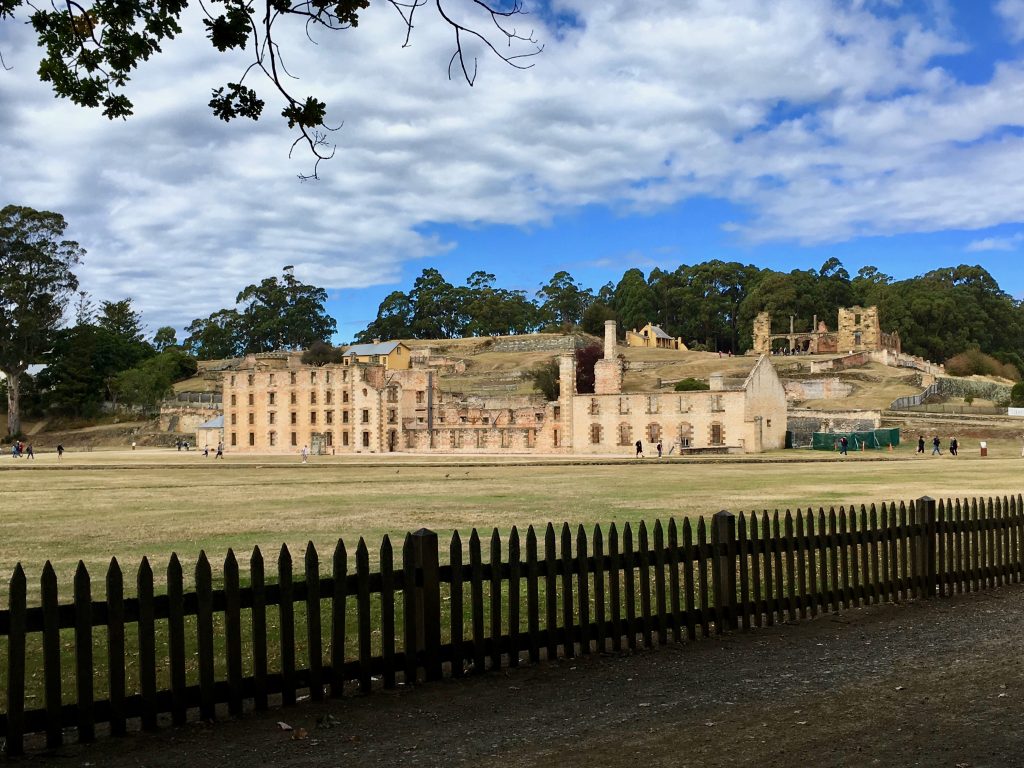 Despite its reputation as pioneering a new and enlightened view of imprisonment, Port Arthur was just as harsh and brutal as other penal settlements. Our guide there told us that some prisoners committed murder (an offense punishable by death) just to escape the desolation of life at the camp.

But Port Arthur was for the men, with women having their own special opportunity to reform themselves in “female factories” (women’s workhouse prisons). We visited the ruins of one of them in Hobart with a friend whose three times great grandmother was a teenage Irish girl who somehow ended up on the streets of London, and in 1832 was found in a pawn shop with a pair of boots that had earlier that day been stolen from a boot maker. She was given seven years which was in effect a life sentence.

She was incarcerated in the Hobart Female Factory at Cascades outside Hobart Town. 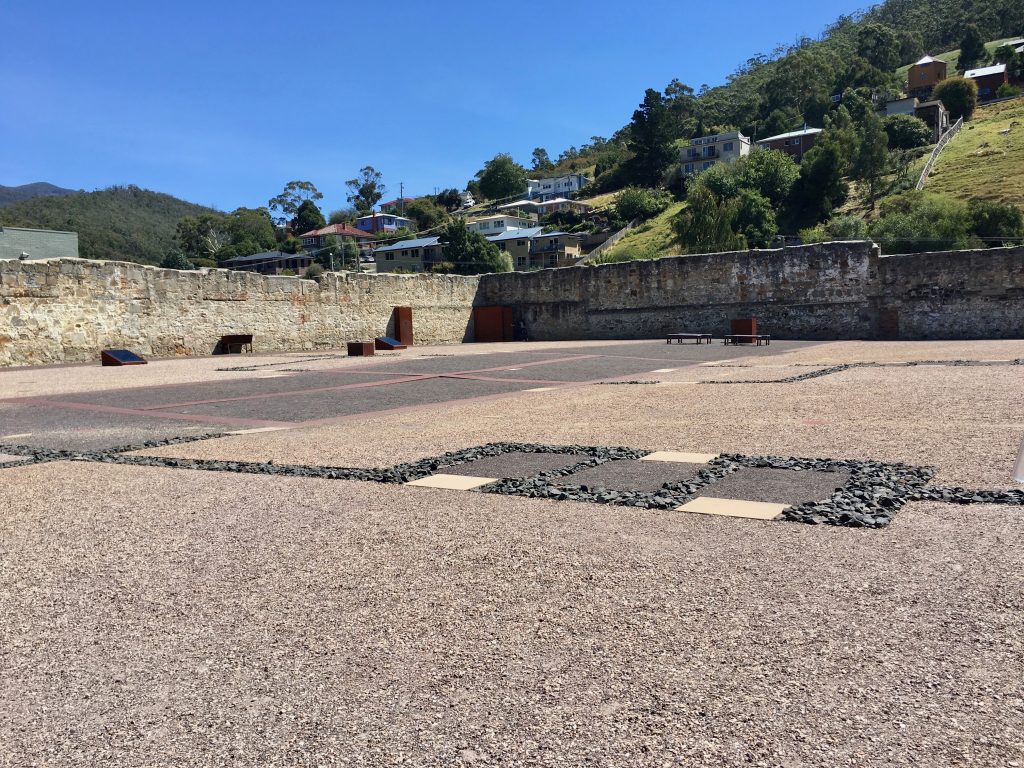 The remains of the Female Factory at Cascades

She was not what one would call a model prisoner, and to get her away from the bad influences in Hobart she was sent to a garrison town in the Midlands, where she married an ex-convict and went on to have 12 children. In the 1850’s her husband died seeking his fortune on the Victorian gold fields, and widowed Mary spent the remainder of her life in Hobart — often caring for her grandchildren. She died in Hobart in 1883, and her story was all but lost to the family until a few years ago when our friend discovered her records in the Archives. She thought her mother probably knew nothing of her ancestor’s story, and that her grandmother (Mary’s granddaughter) covered up the convict stain. Regardless, Mary’s story is typical of those transported to the colonies.

Then there were the free settlers (colonists). While a few arrived in 1804, it wasn’t until the 1820s when land grants (the land that belonged to the indigenous people was considered as free land for the colonists) were offered to “suitable” people. Given the additional incentive of free labor supplied by the convicts, the rush was on.

While we found that while you can’t avoid the prisoner history in Tasmania, what still lurks in the background is what happened to the indigenous people.

Before the “discovery” of Tasmania by the Europeans, it was inhabited by an indigenous population. At the time of the British occupation and colonization in 1803, the indigenous population was estimated at between 3000 and 10,000. Yet it took the British only 30 years to wipe out 35,000 years of civilization with a combination of the violent conflict with settlers known as the “Black War” (which peaked between 1825 and 1831 and cost the lives of almost 1100 Aboriginals and settlers), lies and broken promises about resettlements for their safety and preservation of their cultural tradition, and from the late 1820s, the spread of infectious diseases to which they had no immunity. The near-destruction of Tasmania’s Aboriginal population turned out to be effectively an act of genocide by the British.

As we traveled through Tasmanian history we realized there is a moral here worth paying attention to. Steal a loaf of bread to feed your starving children, and you’ll get sent to a prison 15,000 miles away with little hope of returning home. But steal a country and you become a pioneer lauded for your hard work, perseverance, and foresight, and often rewarded with a statue erected as a testament to your greatness.