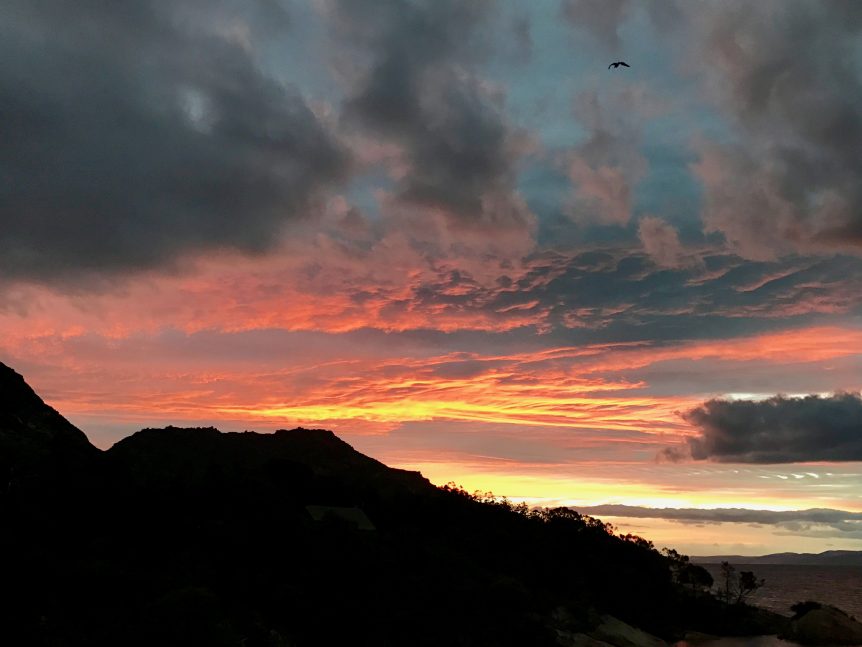 Most of my life I had no idea where Tasmania was, much less any thoughts about going there. In my ignorance I had thought it was somewhere in, or off the coast of Africa — mostly a jungle full of weird animals. But in late 2009, I ended up with two very smart software developers from Tasmania as coauthors on one of my books and, much to my chagrin, I learned Tasmania is an Australian state — a roughly heart-shaped island about 200 miles by 200 miles (320 km) — 150 miles (240 km) south of the Australian mainland.

It wasn’t just these two guys that got us interested in Tasmania. We were invited to a reception for the then Tasmanian Premier (Governor) at the Australian Consulate-General’s in San Francisco, who was not only very articulate about his love for Tasmania, but also a big technology supporter (by 2013, Tasmania planned to have installed fiber, at no charge, to nearly all of its 500,000 citizens).

As we talked with him, and several other people, Tasmania became more and more interesting. But while the tech side was intriguing to me, what appealed to us was how everyone we met talked about its natural beauty. Its latitude and climate are similar to Northern California, and it is mostly undeveloped (just over 40% of its little over 500,000 population is in the Greater Hobart area), with almost 45% of the island in reserves, national parks, and World Heritage Sites. But what closed the deal was the books we were given (sort of like party favors) that showed how beautiful and mostly unspoiled the island was. We were hooked.

So much for my encyclopedic knowledge of geography.

While we went for the natural beauty, we also found great walks, a nice small city (Hobart) with a great art museum, friendly people, and a disturbing dark history that I’ll talk about in my next post.

Tasmania, like New Zealand, is road trip country, but before we left Hobart for the open road, we had to check out the Museum of Old and New Art (MONA). We had heard from our friends and the few people we had met who had been to Tasmania, that we had to go there. Based on those recommendations, but with only a dollop of enthusiasm (ho hum, yet another museum and how good could it really be), we took the short ferry ride from downtown Hobart (which at that time I imagined might be the real highlight of the trip) to the museum.

The ferry ride was quite nice, but the experience was dwarfed by one of the coolest museums in the world. 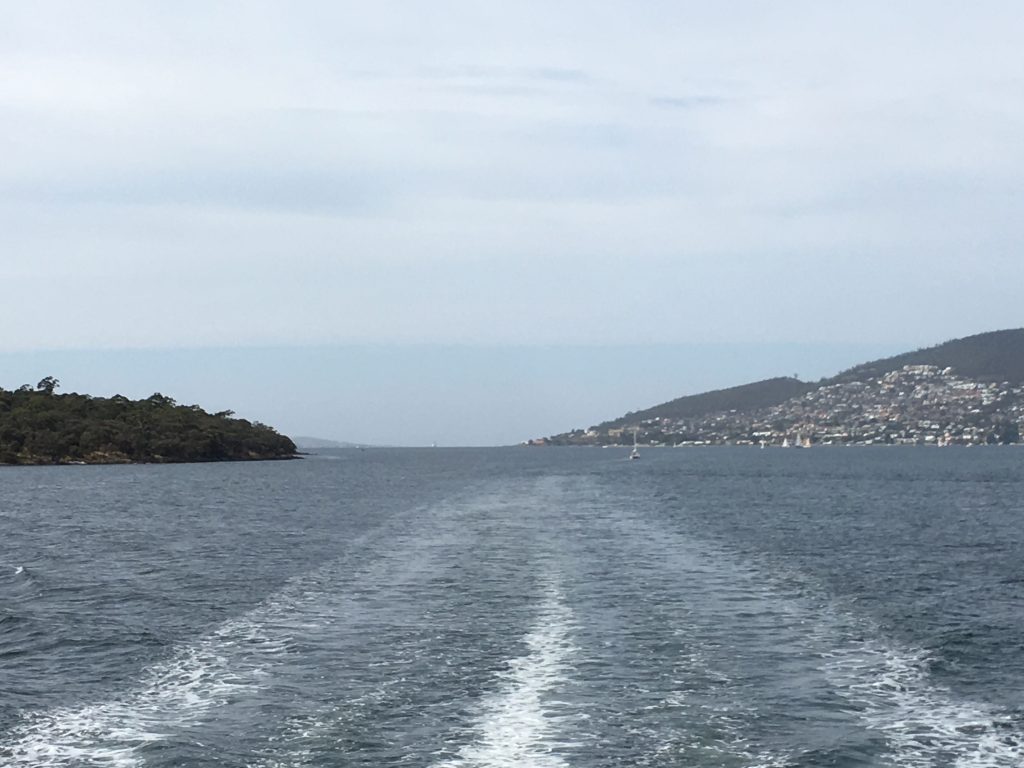 It is privately owned by David Walsh—a professional gambler (how cool is that) and art collector — built to house his art collection (with free entrance for Tasmanians), and funded by a winery, brewery, restaurant, and hotel on the same site.

It is filled with great and unusual art — the modern and ancient integrated to present a single experience. A not usual, but still a common sense way, to think about presenting art.

When we got there, we found a less than assuming single-story building on top of a cliff, raising both alarm and curiosity bells. But as we have learned, over and over again, appearances can be deceiving, and inside we were intrigued (as Alice was with her rabbit hole) by a glass elevator that is wrapped by a staircase spiraling down to three levels of a labyrinthine display space built into the side of the cliff.

The architecture is amazing, but unlike the Guggenheims in New York and Bilbao (designed as works of art unto themselves), the building and the collection are a unified whole. The space does not overwhelm the art, but becomes an integral part of the “collection,” and enhances the experience.

There are no labels on the walls — there is the “O”, a small hand-held device that is free to all visitors, and through the “magic” of an internal positioning system, it locates you in space, and presents a set of texts, audio, and visuals, about the artwork right around you. The information ranges, based on your interest, from a few facts to Hunter S. Thompsonesque commentaries to great detail. You can save the information on the pieces you find interesting, and access it later. (I’ve actually done that and it’s amazing how quickly the memories fade, and how fascinating it is to revisit the works I especially liked.) 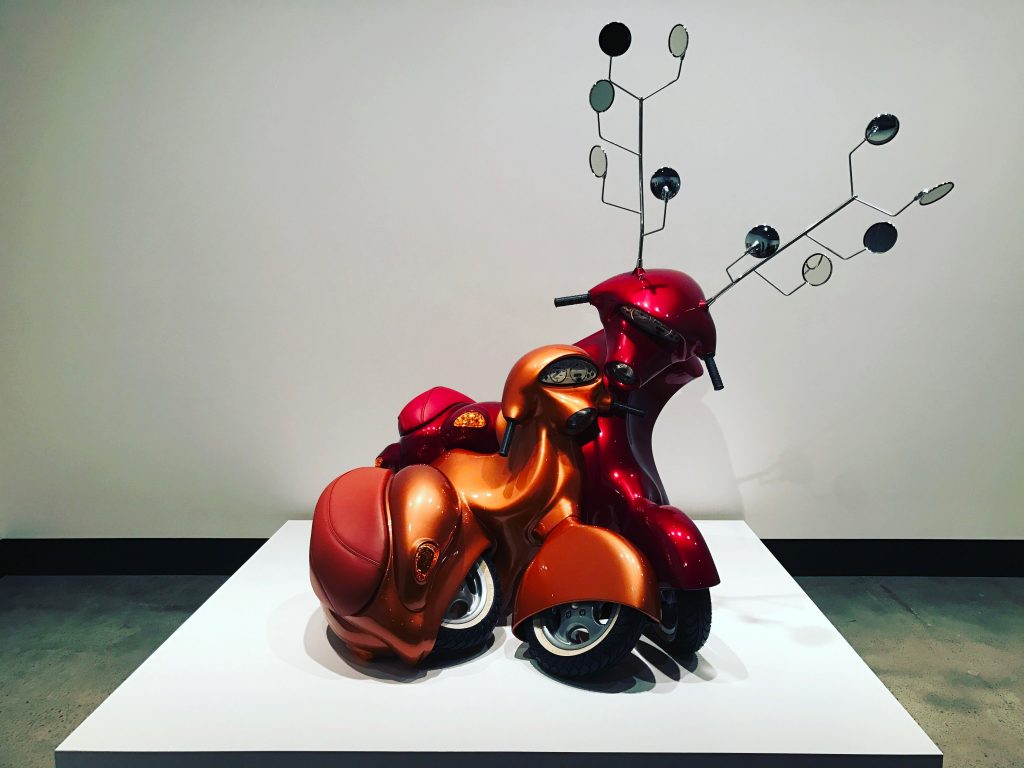 There was something rather appealing about this piece

The permanent collection was wonderful, but the highlight was the current exhibit — On the Origin of Art. David Walsh had asked four bio-cultural scientist-philosophers (who were already asking questions about the origin of art) Steven Pinker, Geoffrey Miller, Brian Boyd, and Mark Changizi “We need art, but for what?” From their answers came four exhibits, guest curated by each of them.

To Walsh, this question matters, because it goes to the heart of what makes us human, and understanding the answers can change the way we live our lives.

Yes, this is a museum with an attitude, and we loved it.

On the other side of the spectrum of experience (or perhaps not if you have a different view on art and nature), there is the natural beauty of Tasmania. While it is a part of Australia, it reminded us more of New Zealand than Australia. Outside of Hobart we found a land of spectacular beauty and wonderful hikes (something we had sorely missed during the time we were back in the United States) — as spectacular and as wonderful as we had hoped.

The only problem is that with my limited writing skills I can’t begin to describe our experience (this is more of a job for a poet). But I do feel it’s my responsibility to try and communicate how spectacular it is, so sort of breaking my not-a-travelog rule, I’ll just describe where we went and show a few of the fifteen hundred or so photos both Linda and I took (that also don’t do it justice).

It is something you have to see in person, and you should.

There was Freycinet National Park. On the way north from Hobart along the coast there are beautiful beaches and several wineries (no we didn’t stop at all of them). The Freycinet Peninsula, where the park is located, is not very developed, and we loved the“official” road signs (like the ones you often see leading you to main attractions elsewhere) that led you to small local businesses, including our four room bed and breakfast. 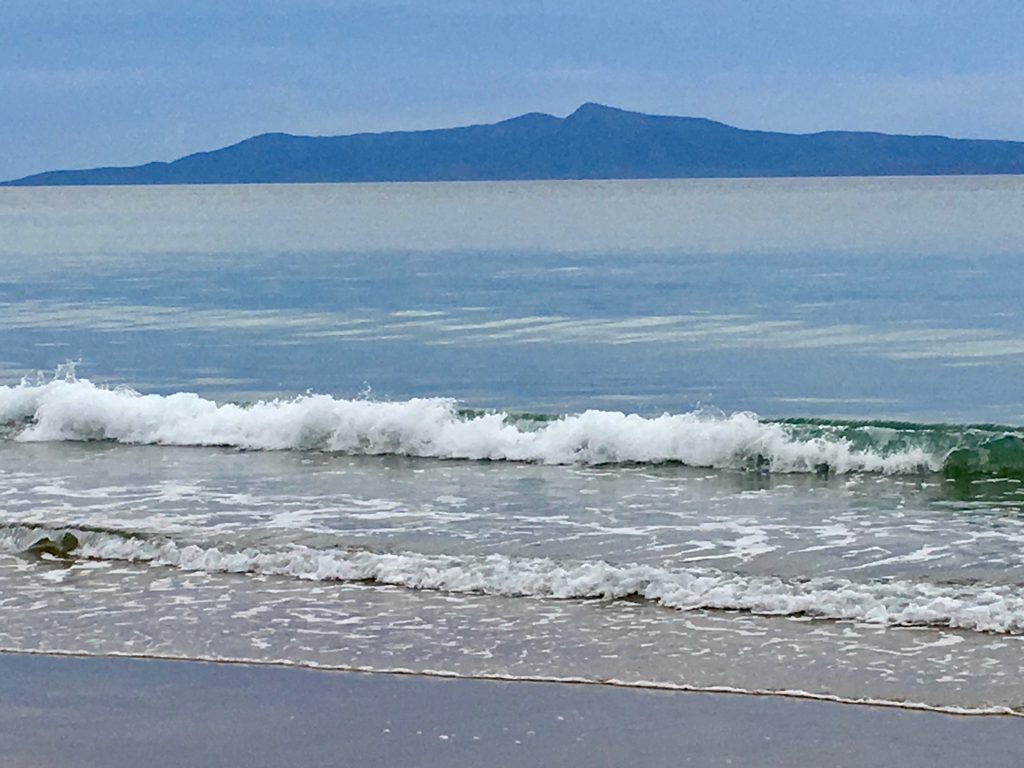 One of our many stops along the way

It is a place of amazing sunsets, 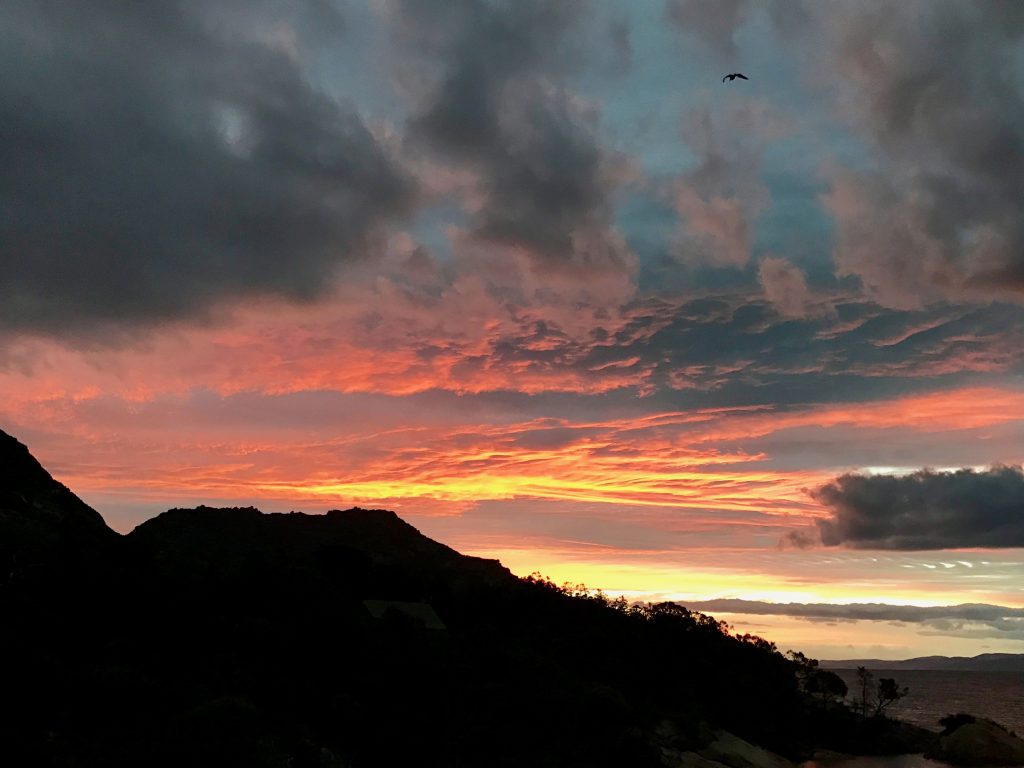 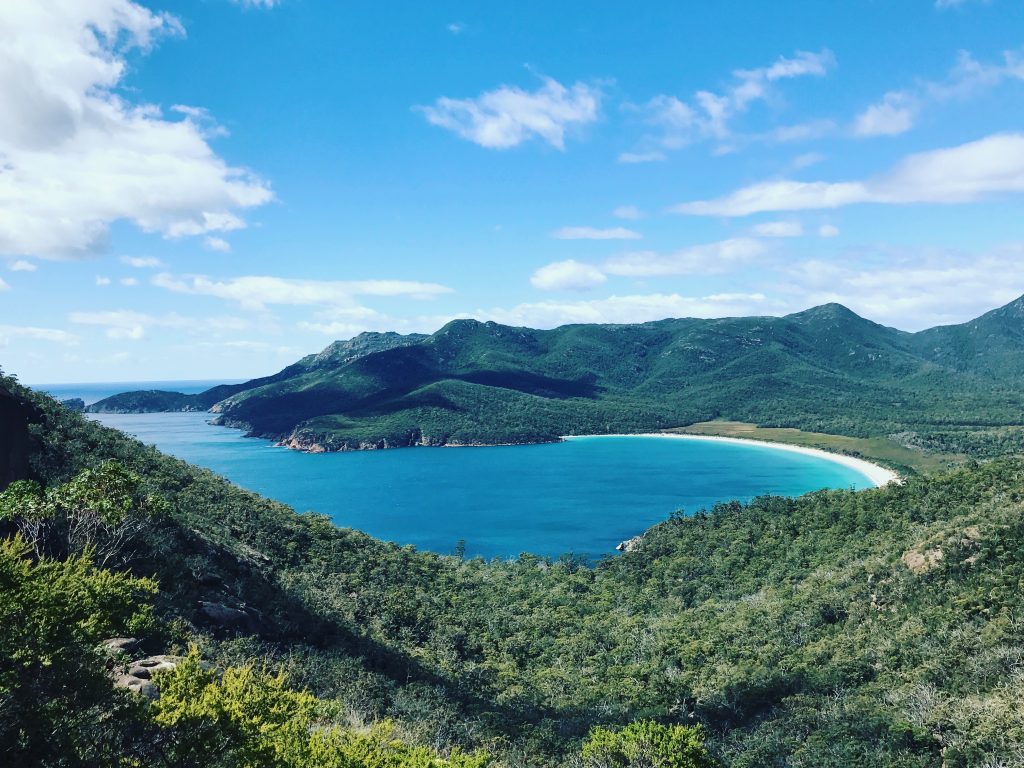 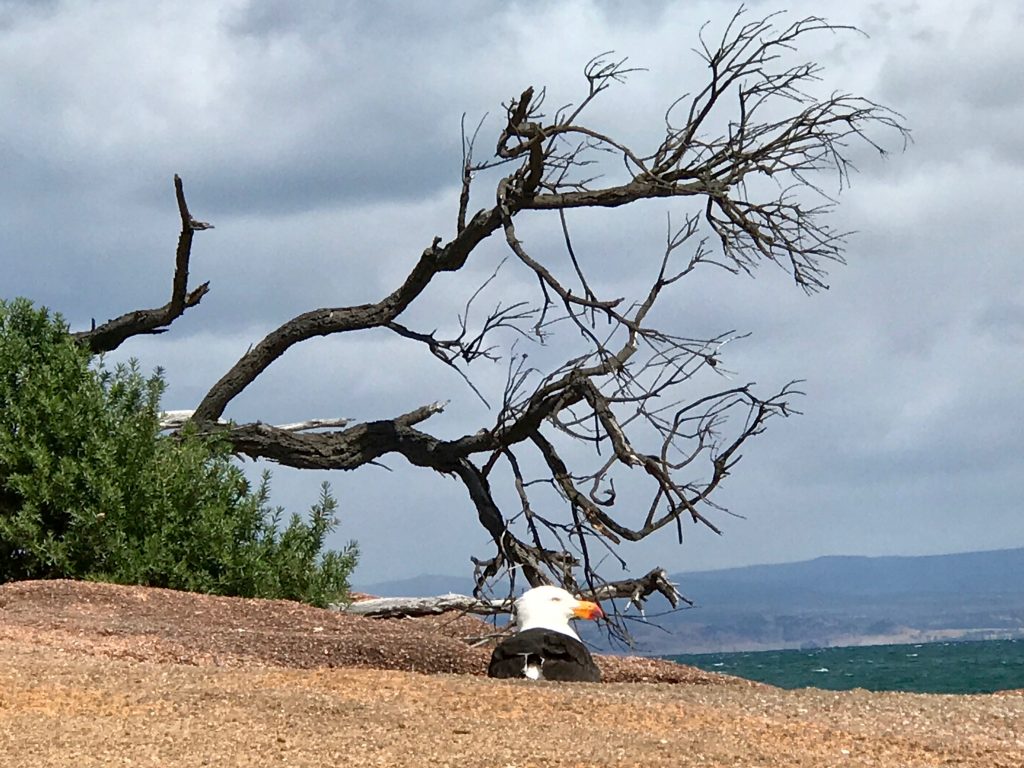 Looking out at Sleepy Bay 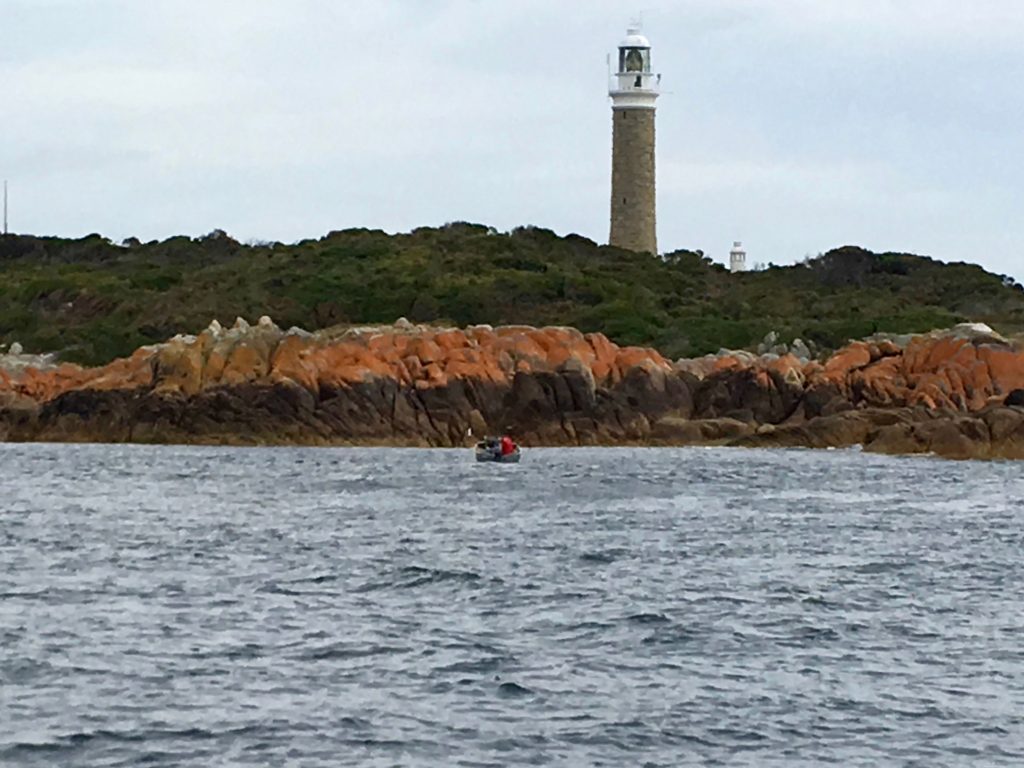 and rich with dolphins. 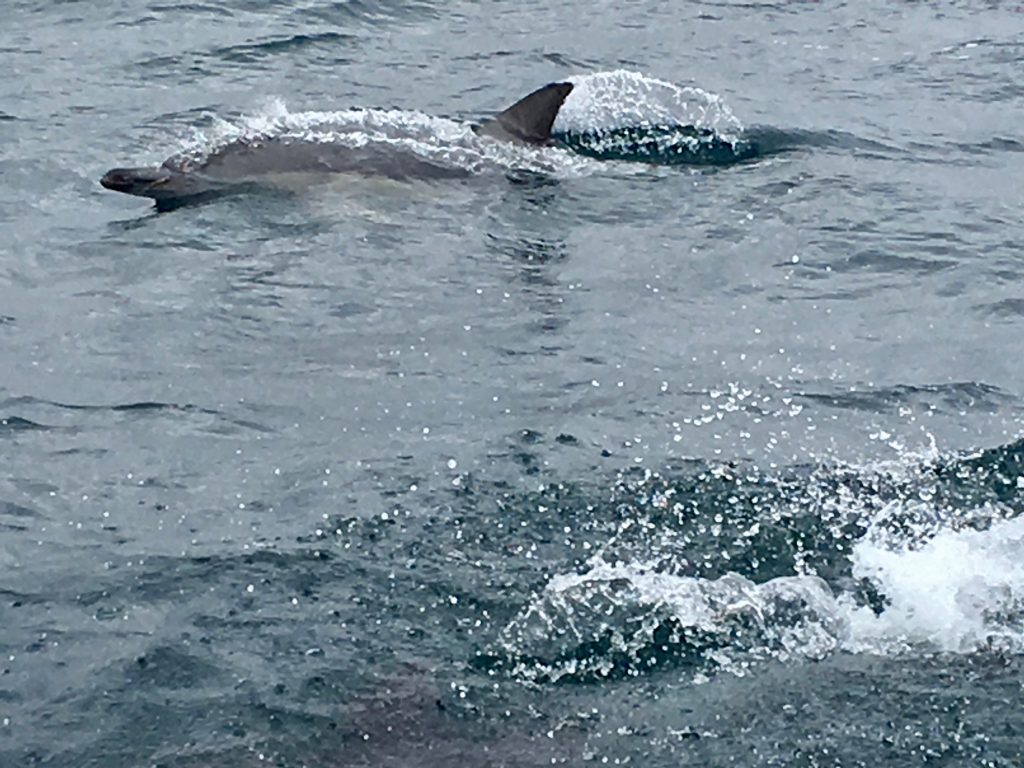 Hanging out with the locals

There were the spectacular views from the Nut State Reserve in Stanley. 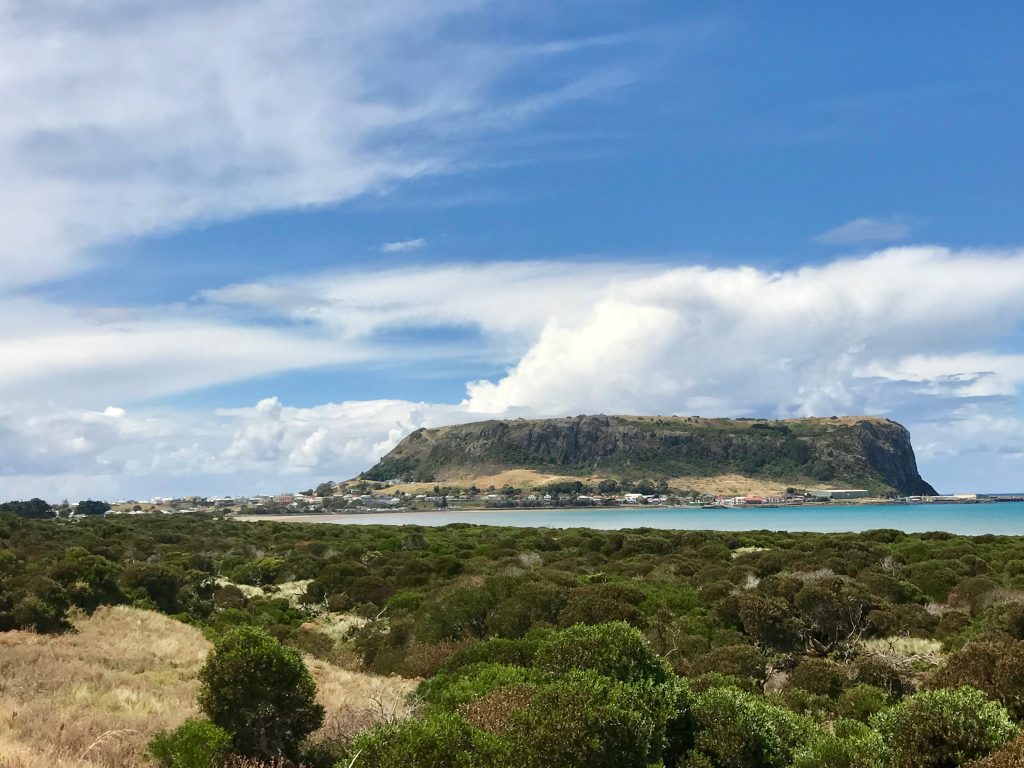 No one is quite sure why it’s called the Nut 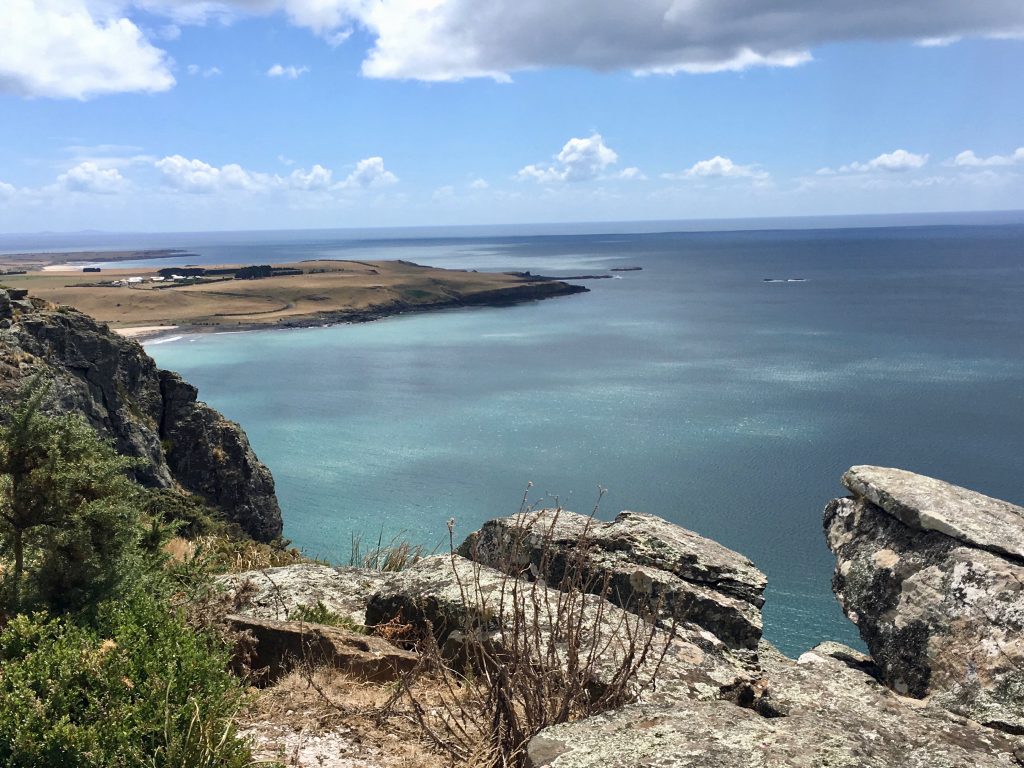 Before we left on our road trip we had gotten some recommendations on what to see as we wandered the island, and had pretty much mapped out our trip. Then, as we were leaving Hobart, the owner of the Airbnb where we had stayed and her friend told us not to miss Arthur River. So we rearranged a few things and ended up there for a day.

Arthur River is at the northwest point of Tasmania where the next stops are Patagonia to the east and west (yes both), and Antartica to the south. Here the waves of the Roaring Forties — the global wind current that blows around the earth at latitude 40–50 degrees — meet the Arthur River with a vengeance, resulting in amazing views of the breaking waves that seem to stretch out forever and, along with the wind, sculpt the coastline. At an overlook in Arthur River is a plaque titled The Edge of the World. North West Coast Tasmania, and a poem by Brian Inder, who coined the term. Standing there, struggling not to be blown away by the wind, you do seem to be at the edge of the world. 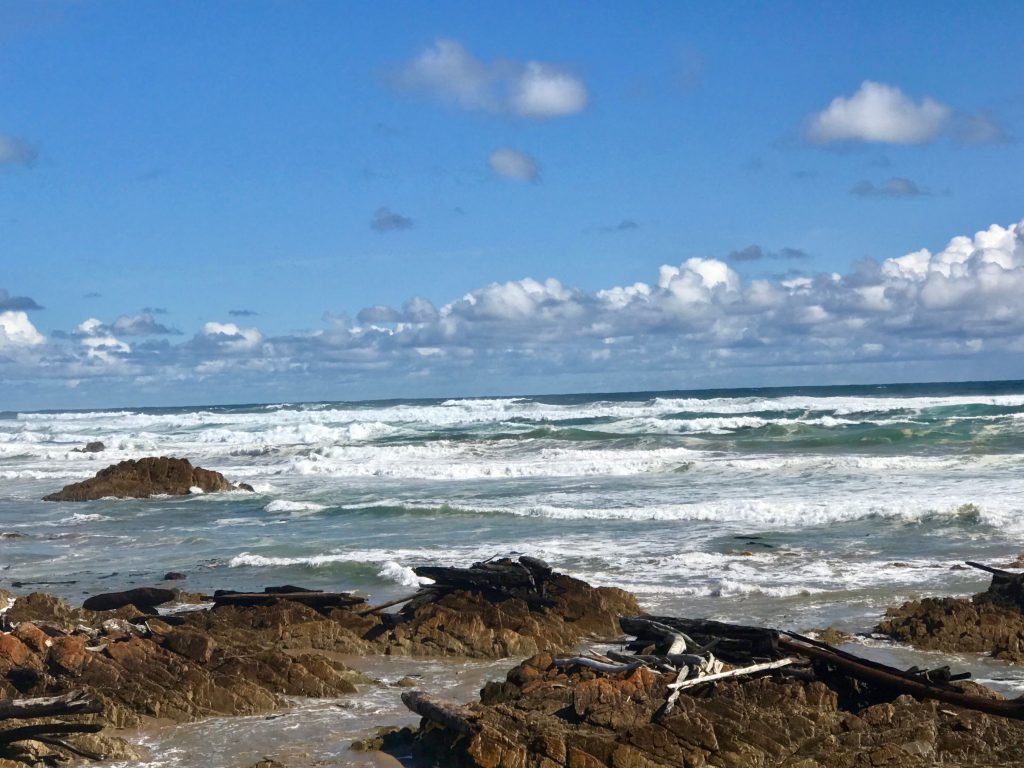 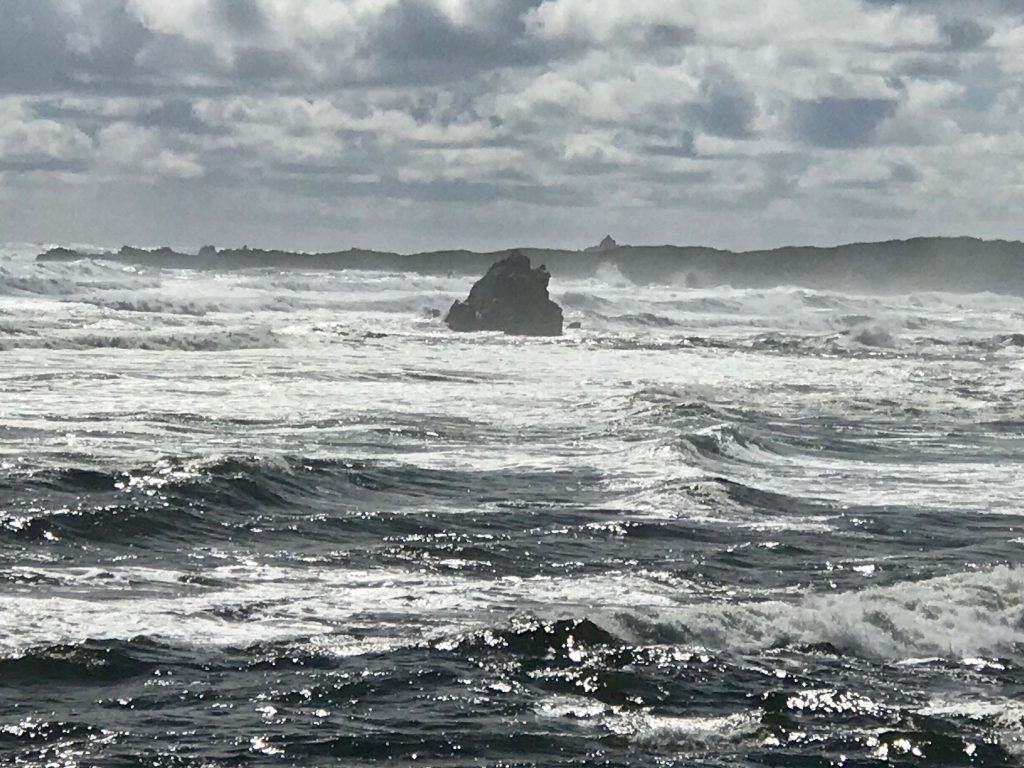 You can image how fierce it could be during a storm

There was Cradle Mountain — another one of those places that everyone tells you that you have to see. It is a very popular tourist destination, on every top ten list. Dispite that, it was a lovely place with several great walks, especially the one around Dove Lake. 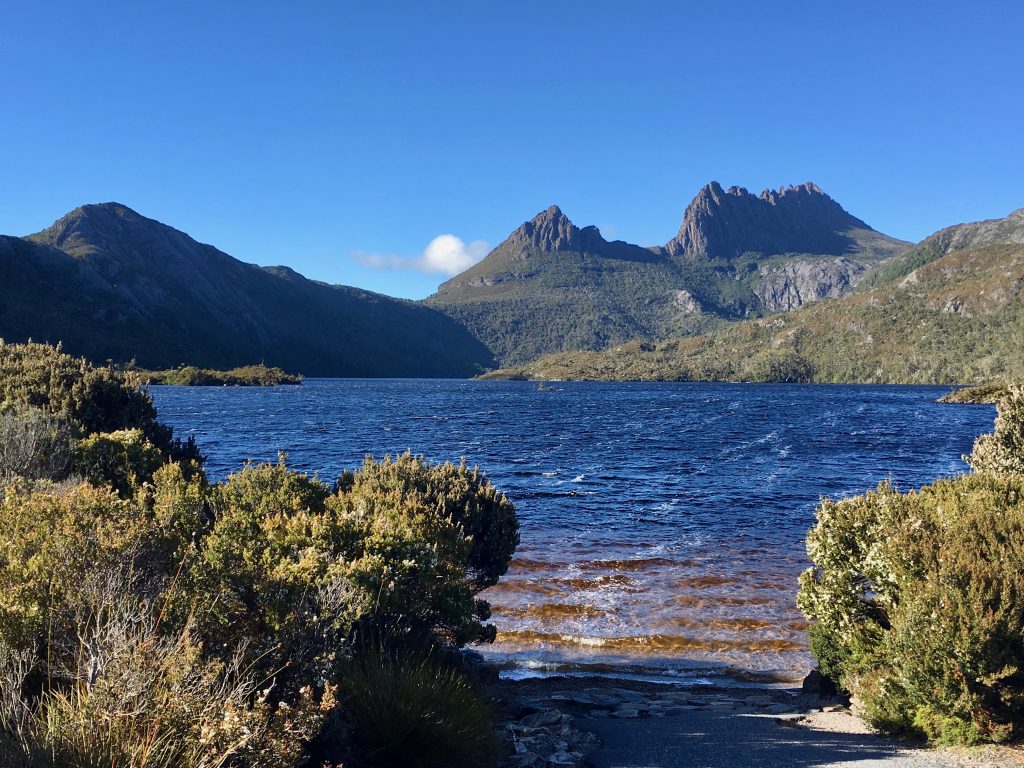 A great hike around the lake

Then back to Hobart where we went to the top off Kunanyi/Mount Wellington. Kunanyi was what the Palawa, the surviving descendants of the original indigenous people of Tasmania called Mount Wellington, and in 2013 a Tasmanian dual naming policy was announced, and Mount Wellington was renamed.

While I generally could care less about up high views of cities, this one does take your breath away. It is a 360-degree view and one of the most magnificent views in the world. You can see the city below and to the east, the Derwent estuary, and to the west glimpses of the World Heritage Area nearly 100 kilometers (62 mi) away. It was one of the most dramatic views that we have seen. 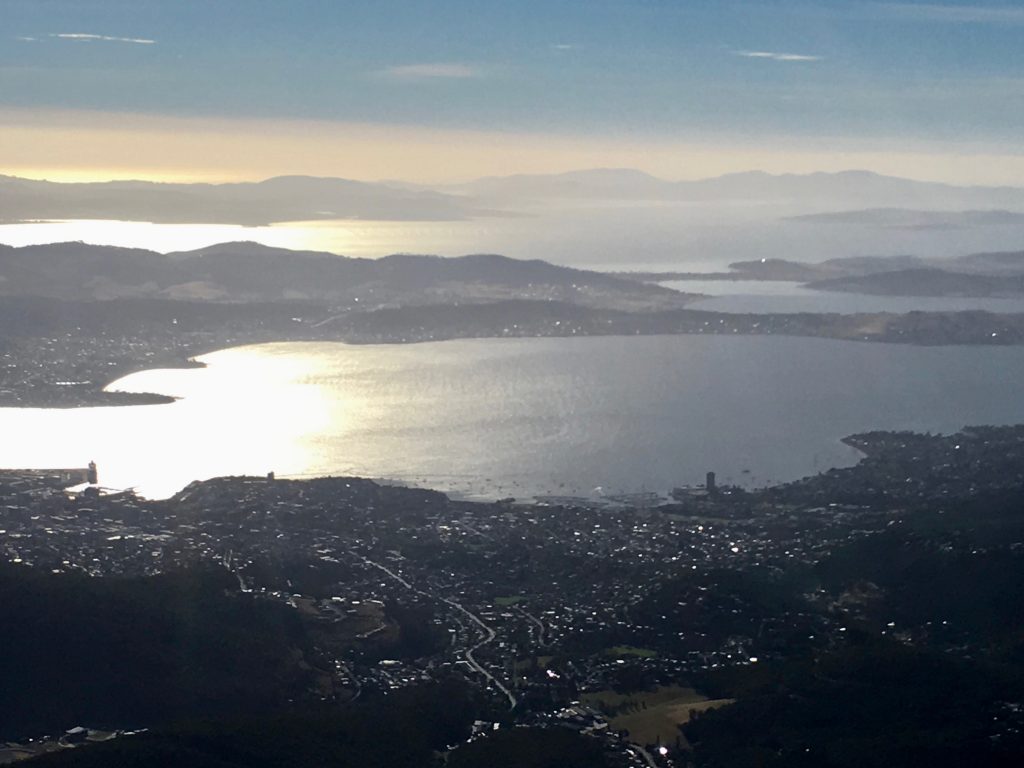 But lurking in the background of all this beauty we discovered a dark history, and I’ll tell you about it in my next post.