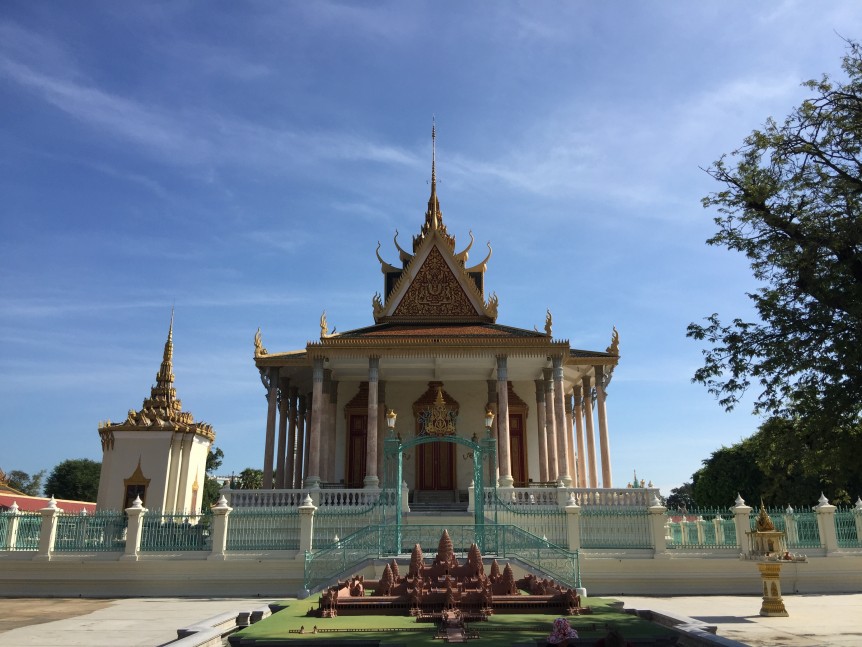 We waltzed into Cambodia and quickly realized that this was going to be a test of how flexible and resourceful we were.

On the drive from the airport to the hotel the streets were flooded with lots of cars, and even more motorbikes and tuk-tuks. There were few if any traffic lights or stop signs, which were largely ignored anyway — motorbikes often driving the wrong way on a major street. Anytime there was a hole in the traffic flow, a motorbike filled it. And, oh yes, the horns, an atonal symphony. It was surfing on a sea of chaos. 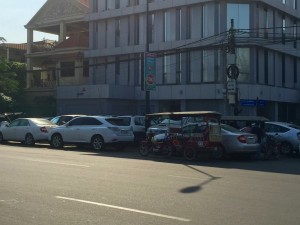 Park where you can

We saw block after block of small restaurants and shops, most less than the width of a two car garage, and instead of a “proper” storefront with doors and windows, there was just an opening the width of the unit. Sidewalks were a working part of a store or restaurant or were parking lots for motorbikes and cars.

And yet, as we would later find, it all seemed to work, with some unwritten rules of the road that everyone followed and that we never did figure out. Pedestrians walked on the streets and vehicles wove around them. Crossing the streets was an adventure, as exciting as it was in my New York days. Just as the muscle memory remains once you learn to ride a bicycle, the jaywalking skills honed in my youth quickly returned. Here, it was all about eye contact as you threaded your way between cars, motorbikes, and tuk-tuks. Linda, on the other hand, started off terrified but shortly got into the groove. 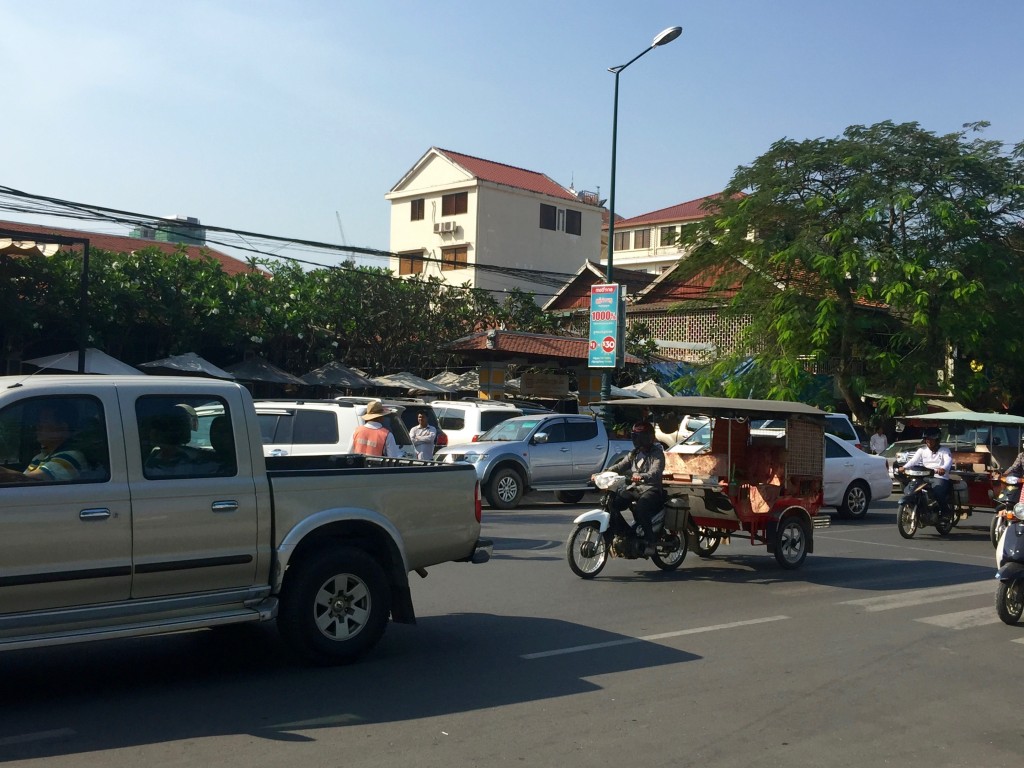 Crossing the street is a challenge

I normally don’t write about our hotels, but in this case, the Willow Boutique Hotel was our oasis in this sea of chaos. We had decided that in Asia we would stay in small hotels, hoping that the people there would help us get the lay of the land. The Willow turned out to be a perfect choice. It is owned by an Australian/Khmer (how Cambodians refer to themselves) couple, Eliza and Teo, and everyone who worked there seemed to be related. It’s an old colonial mansion, and our room was charming and large, with a balcony and a canopied bed.

Eliza helped us get grounded in Cambodia, and as we met other ex-pats, Cambodia began to reveal itself. One of the first things we discovered was, just as in Europe where you couldn’t escape WW II, the Holocaust, and the Soviet Occupation, in Cambodia you couldn’t escape the Cambodian Genocide. And to “get it over with” (a phrase Eliza used that stuck with me), the first place we visited was the Tuol Sleng Museum of Genocide, the site of the most important prison in Cambodia during the Genocide — the infamous S-21.

After years of a bloody civil war in Cambodia, exacerbated by both direct and indirect US involvement to stop the spread of communism to Cambodia — including US incursions and bombing of the North Vietnamese Army (PAVN) and the Viet Kong (NLF) that used Cambodia as a haven (which actually increased local support for the rebels), the communist Khmer Rouge took power in 1975.

The goal of the Khmer Rouge was to transform Cambodia into a rural, classless society in which there were no rich people, no poor people, and no exploitation — laudable goals. So they abolished money, free markets, normal schooling, private property, foreign clothing styles, religious practices, travel outside a person’s cooperative, and assembly (If three people gathered and talked, they could be accused of being enemies and arrested or executed), and traditional Khmer culture.

Family relationships were replaced with belief, obedience, and respect for Angkar Padevat (the Khmer Rouge top leadership), which was to be everyone’s “mother and father.”

Besides destroying all existing institutions, to become a rural, classless society required purifying the population — ridding it of all those that might interfere with the revolution. When they took power, the Khmer Rouge arrested and killed thousands of soldiers, military officers, and civil servants from the existing Khmer Republic regime. They then went on to arrest, and eventually execute, almost everyone suspected of connections with the former government or with foreign governments, as well as professionals and intellectuals. People were often encouraged to confess to Angkar their “pre-revolutionary lifestyles and crimes” (which usually included some kind of free-market activity; having had contact with a foreign source, such as a U.S. missionary, international relief or government agency; or contact with any foreigner or with the outside world at all), being told that Angkar would forgive them and “wipe the slate clean.” Ethnic Vietnamese, ethnic Thai, ethnic Chinese, ethnic Cham, Cambodian Christians, and Buddhist monks were the targets of persecution. One estimate is that out of 40,000 to 60,000 monks, only between 800 and 1,000 survived. The Khmer Rouge destroyed 95 percent of existing Buddhist temples, and turned the remaining few into warehouses or allocated them for some other degrading use. In a short span of a year or so, the Khmer Rouge effectively wiped out the center of Cambodian culture and its spiritual institutions.

When they took power they forced two million people in Phnom Penh and other cities into the countryside to do agricultural work. The 1976 “Four-Year Plan,” required Cambodians to produce three tons of rice per hectare throughout the country. This meant growing and harvesting rice all 12 months of the year. To accomplish that the Khmer Rouge forced people to work more than 12 hours a day without rest or adequate food. Thousands of people died during the evacuations, and because the people that had been sent to the countryside had no farming experience, its attempts at agricultural reform led to widespread famine, while its insistence on absolute self-sufficiency, even in the supply of medicine, led to thousands of deaths of thousands from treatable diseases such as malaria.

People accused of political crimes (meaning any talk or thought against the revolution) were sent for “re-education,” which meant near-certain death. They were sent to prisons, where they were interrogated, tortured, and sent to be executed in the killing fields. The most important of these prisons was S-21, which, until 1976, Tuol Svay Pray High School. Approximately 14,000 prisoners passed through it while only seven prisoners survived. While torture was freely used, torture that ended with death was discouraged. The goal was always confession.

Today it is the Tuol Sleng Museum of Genocide on the outskirts of Phnom Penh — a memorial to those that were killed, and a reminder of what human beings are capable of. While it was responsible for a mere 14,000 deaths out of a total of three million, it stands today as a metonym (symbol) for what happened in Cambodian in the name of revolution.

Inside the gates, it looks like any high school, with five buildings around a grass courtyard pull-up bars, green lawns, and lawn-bowling pitches. But inside the buildings is the evidence of the terror of what went on there. The head of S-21 Prison was Kang Kech Ieu, better known as Brother Duch. The guards, interrogators and other prison staff at S-21 were between 15 and 19 years of age and were from peasant backgrounds — serving as the praetorian guards of the Khmer Rouge revolution. 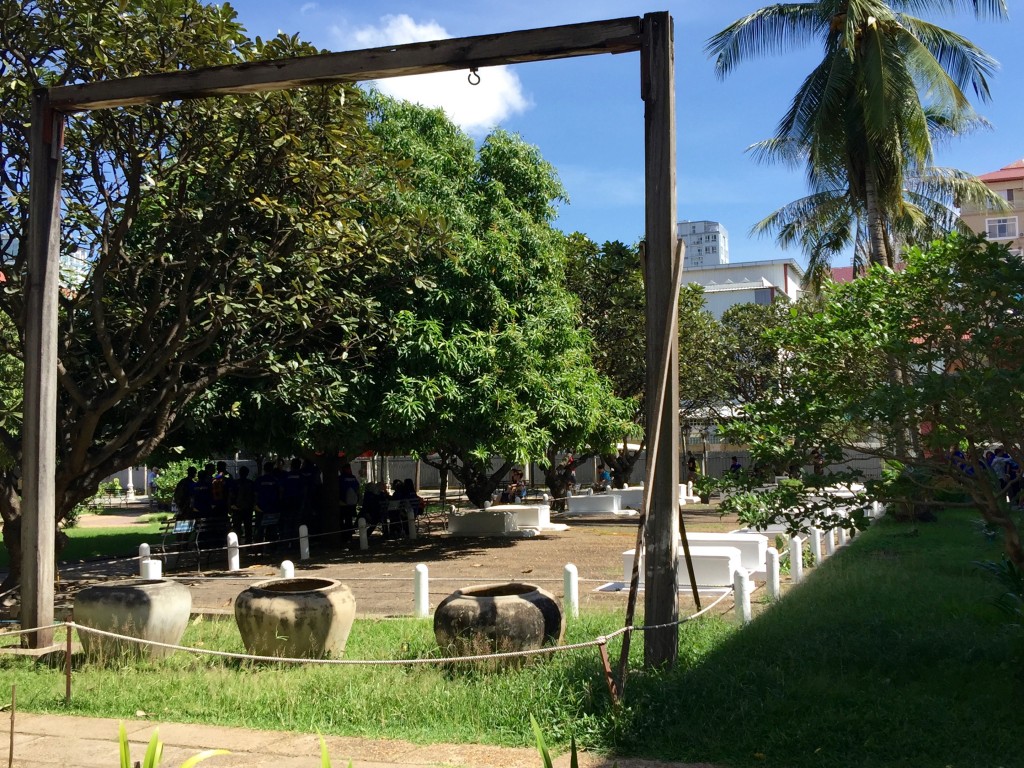 Except for the gallows, an ordinary school campus

Not only did the Khmer Rouge transcribe the prisoners’ interrogations, they also photographed the vast majority of the inmates (men, women, and their children), with many of their photos displayed in the buildings. The portraits we saw were haunting, with the resignation of their fate in the prisoner’s eyes. These portraits, some which also had the story of that prisoner, made it all the more personal. It was emotionally devastating.

But people weren’t normally executed at S-21. They were sent out to the killing fields to be murdered — the most famous is the one outside of Phnom Penh (at the village of Choeung Ek), but there were many others (we later saw two in and around Siem Reap). 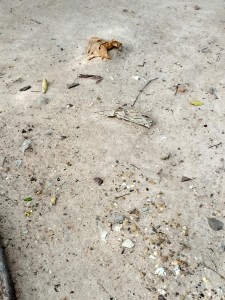 It is horrifying to walk through the mass graves

Today, a memorial park at Choeung Ek has been built around the mass graves of the thousands of victims. Many of the mass graves (many of which haven’t been excavated yet) are visible above ground. After heavy rains, you can still find bones, teeth, and clothing rising to the surface.

Here too, we must never forget. 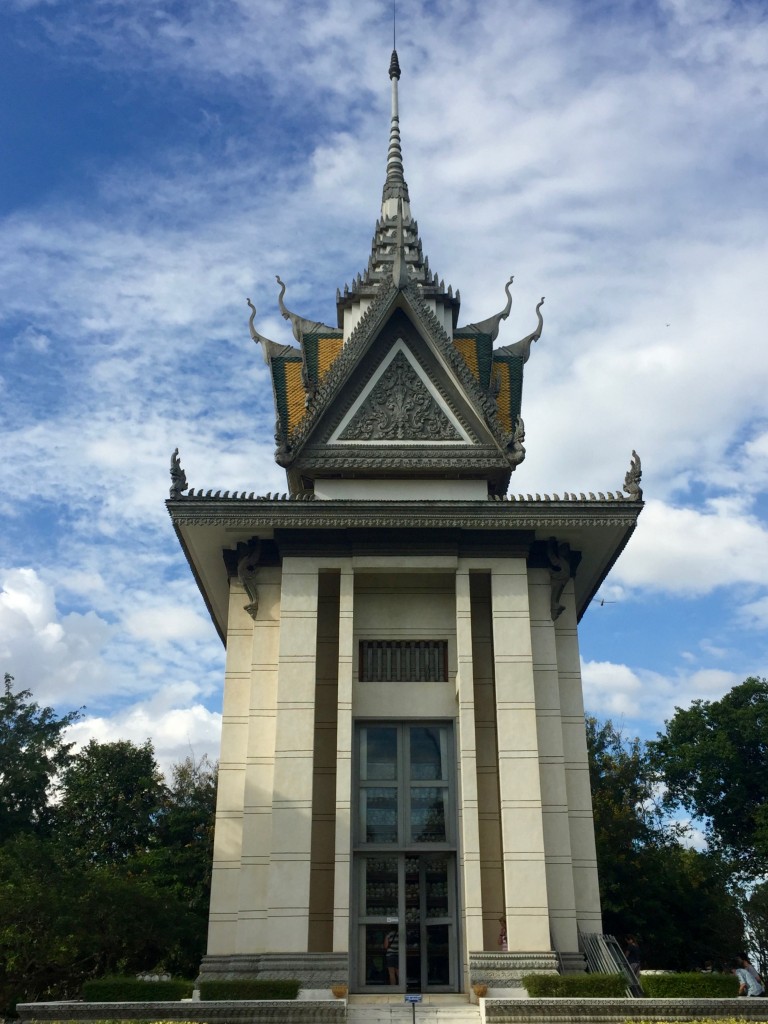 A memorial at the Killing Fields outside Phnom Penh

But the Khmer Rouge legacy is not just the death of three million people, it is also the destruction of Cambodia’s industrial, agricultural, and economic base, and the millions of physically weak, and emotionally wrecked people — the foundation of the poverty we see today. Forty-five years later many of those who lived through the genocide have remained traumatized by it, and will carry those scars forever. And even while the economic infrastructure is recovering, many people still need to go to Thailand and Vietnam to find work.

But even with the Cambodian Genocide continually serving as a backdrop, the Khmer we met were warm and generous people and because of them, I found myself really liking Cambodia. 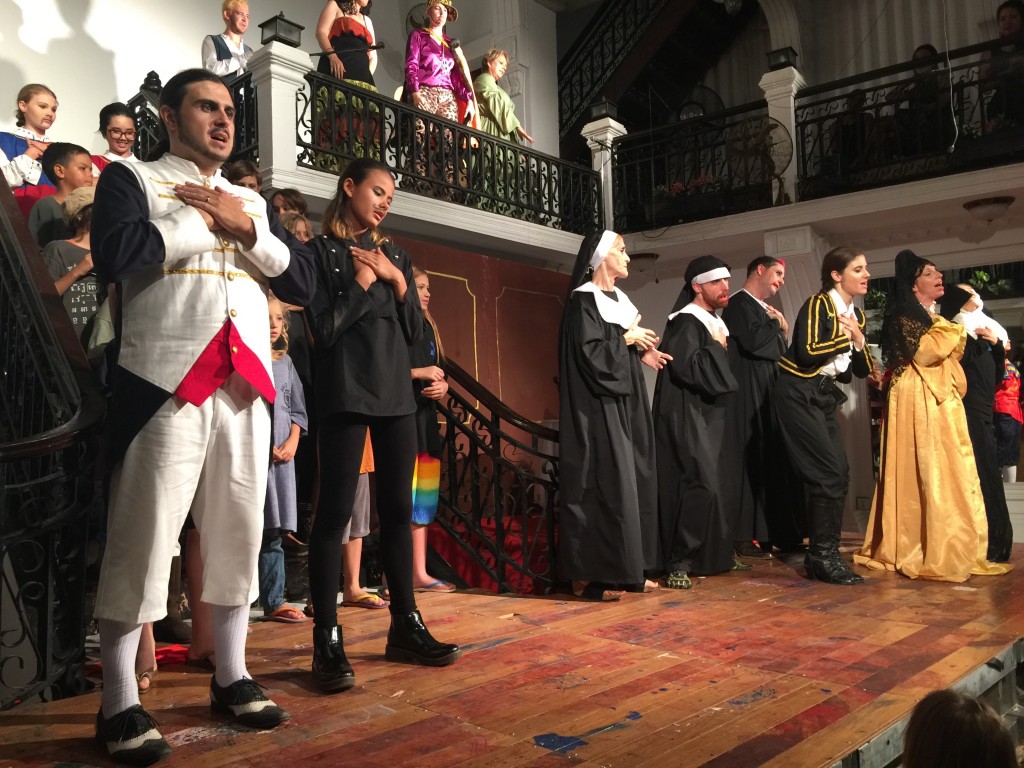 A play at the local school