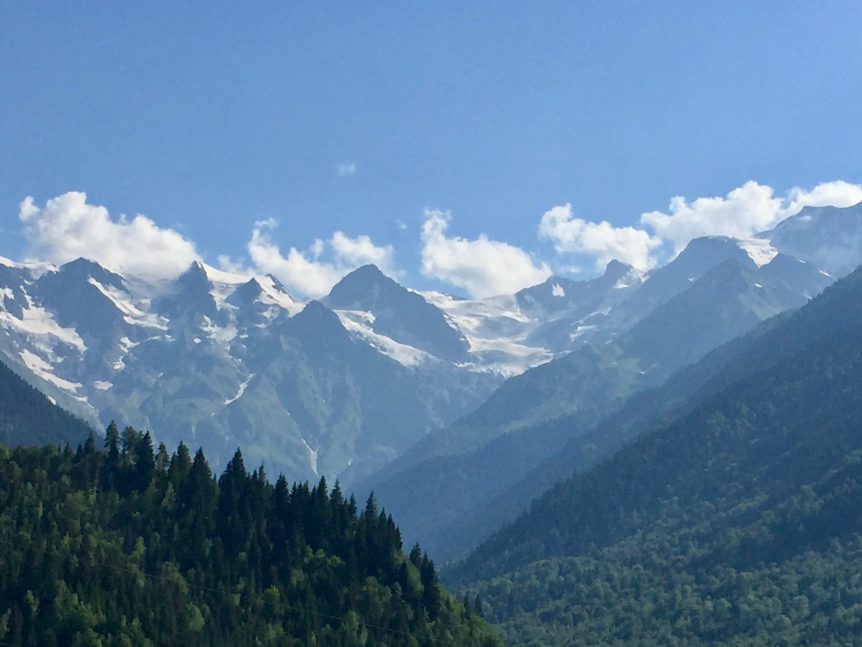 Almost two years ago, when we started to plan our trip, the Republic of Georgia wasn’t even a faint blip on our radar screen — I barely even knew it was an independent country. Yet we ended up spending a fascinating two weeks there, amidst some spectacular scenery and intriguing history.

As we were traveling across Russia, it occurred to us it would be a good idea to figure out, once we were finished with Russia, what to do next. We were scheduled to return back to San Francisco on October 28th, and based on when we were planning to leave Saint Petersburg, we had 104 days to go wherever we wanted. Well, sort of wherever we wanted, because while we wanted to spend that time in Europe, we could only spend ninety of those days in Europe, or more accurately the Schengen Area.

For those of you who do not understand the rules of the Schengen Area, let me explain. The Schengen Area is made up of 26 European countries (with four more to be added) that have abolished passport and any other type of border control.

While in general, this makes it easy to travel  to and between these countries, there is a problem for at least US (and probably other) citizens. While we don’t need a visa to enter and travel in the Schengen Area, we are limited to spending 90 out of 180 days there. While it is possible to get a visa to spend more than the 90 days in a country, the process is incredibly complex and the word Byzantine doesn’t begin to do it justice.

Doing the math, that meant we needed to find someplace outside the Schengen Area for at least 14 days.

Our first thought was Morocco since it wasn’t far from Spain or Portugal where we had already decided to spend the two months before returning to the US. But I wanted to spend more than two weeks in Morocco. Then in Moscow serendipity struck. We were told by several people we had met in Russia and Moscow that the best food in Moscow was Georgian. We found this great restaurant, went there a couple of times, and got talking to the staff, many of whom were from Georgia. They told us what a beautiful place it was and how friendly Georgians are (they were in Moscow only because they couldn’t find work in Georgia).

On a whim I emailed a friend who I thought would know about that part of the world. She emailed me back saying she had just spent a week in Georgia and had loved it (thanks Carla). Figuring two weeks was twice as good as one, we decided to spend our “free” two weeks there.

After a few weeks of emailing back and forth to her travel operator there, and some creative trip routing after a bomb went off at Istanbul’s Atatürk Airport (where we were planning to fly through on our way from Vilnius to Tbilisi), we found ourselves in Tbilisi, the capital of Georgia, ready to go.

So while our trip through Mongolia and Russia was well planned far in advance, because it had to be, this was on the other side of the spectrum, and aside from some drama here and there, it was fun to plan it that way.

Georgia was a treat — it has spectacularly beautiful mountains, and a surprisingly interesting history.

That we were surprised was no surprise — remember, until then I barely even knew it was an independent country.

To start with, Georgia is old. “How old?” you may ask. Well, the earliest evidence of wine production yet found has been at sites in Georgia (c. 6000 BCE)— it’s that old.

On the less sensational side, not only were there early civilizations there in 500–400 BCE, but it is likely that Kutaisi (the capital of the ancient Kingdom of Colchis ) was the location of the Golden Fleece sought by Jason and his trusty band of Argonauts. The Golden Fleece in the epic poem may have come from using fleeces to capture the (then) abundant gold dust in the rivers. And no, we didn’t find any gold as we explored Kutaisi.

The Uplistsikhe Cave Town dates back from the Iron Age (the 6th to the 1st century BCE). Located in the heartland of the ancient kingdom of Kartli (Iberia), it is a complex of dwellings, shops, a theater, and church, and one of the oldest urban settlements in Georgia. Because of its location on the Black Sea and later on the historical Silk Road, Georgia was to become a commercial center as well as a supplier of gold, silver, copper and iron mined in the Caucasus Mountains.

The Golden Age of Georgia (or the Georgian Renaissance) was from the 12th to early 13th centuries (an exciting time in world history; civilizations were flowering in Southeast Asia for example, and Europe was being transformed). The reigns of David IV (called David the Builder) from 1089–1125 and his granddaughter Tamar from 1184–1213 were times of building great cathedrals, romantic poetry, and literature. One of David’s greatest achievements was the Academy at the Gelati Monastery, which would become one of the great cultural and intellectual centers in Georgia. When he died on January 24, 1125, King David was, as he had ordered, buried under the stone inside the main gatehouse of the Gelati Monastery so that anyone coming to the Gelati Academy would step on his tomb first. 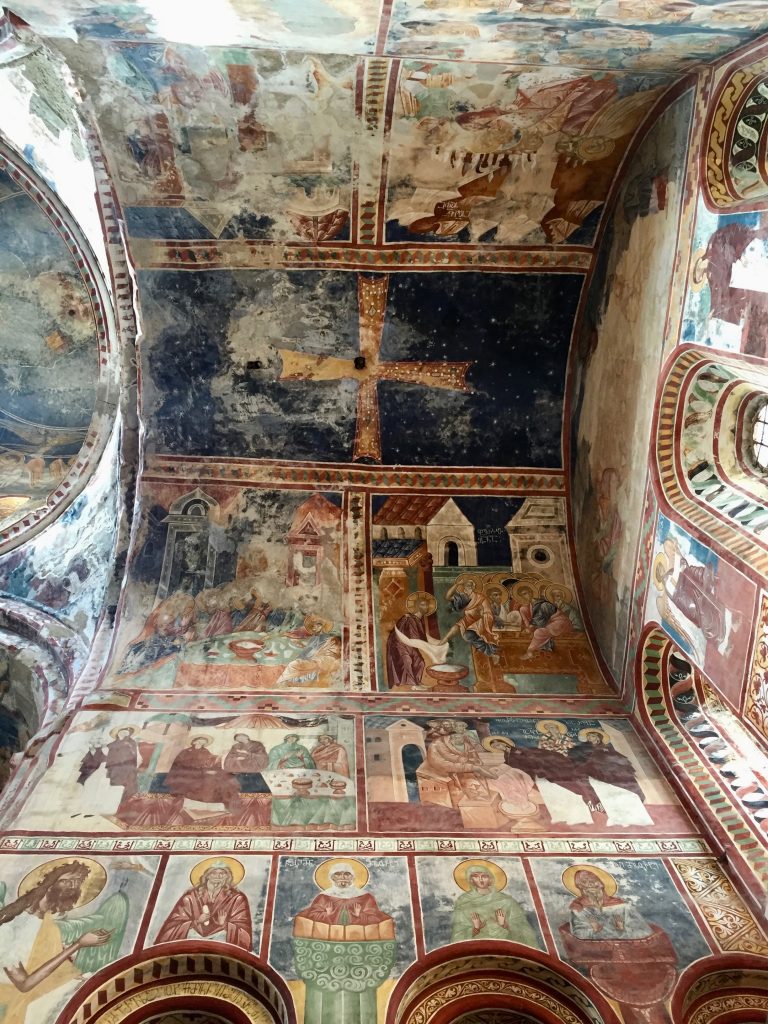 A ceiling at the Gelati Monastery

We also took an interesting side trip to the Georgian Russian Friendship Monument, build in 1983 to celebrate the bicentennial of the Treaty of Georgievsk and ongoing friendship between Georgia and Soviet Russia, but that has been reduced to a poignant reminder of twenty-first century geopolitical maneuverings. After the Russo-Georgian War in 2008 and the subsequent (still) Russian partial occupation, they are friends no more. Although the views remain spectacular, the art has become a little run down, and to our amusement, enterprising Georgians have turned it into a market. 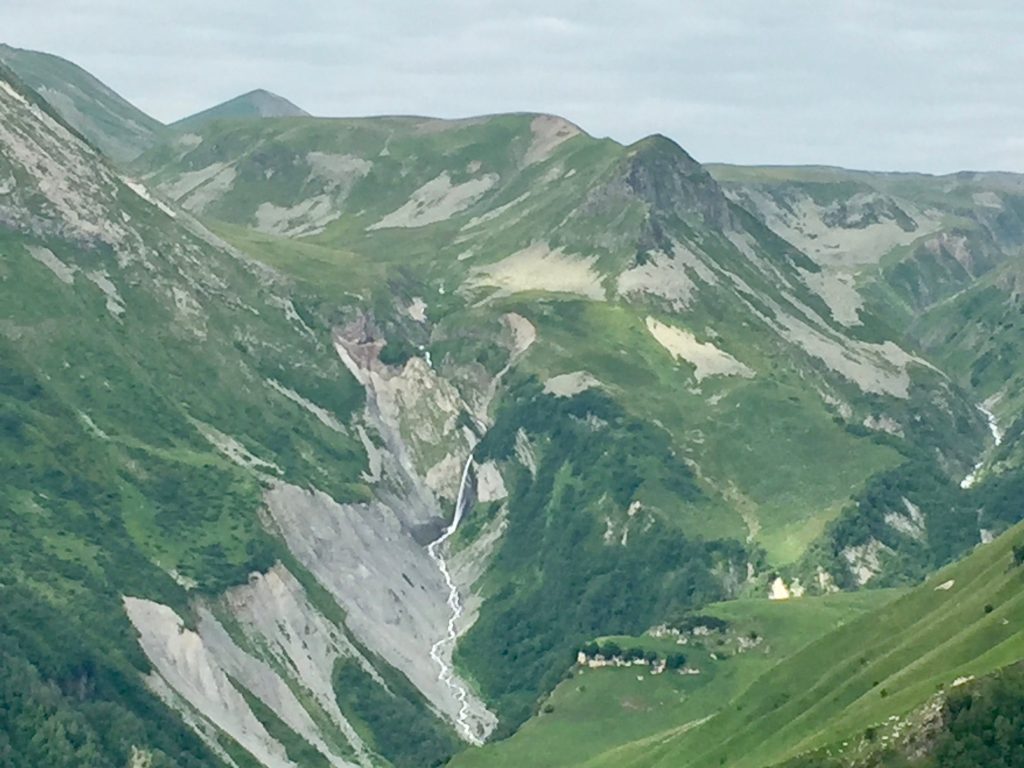 A random view on the way to the friendship monument 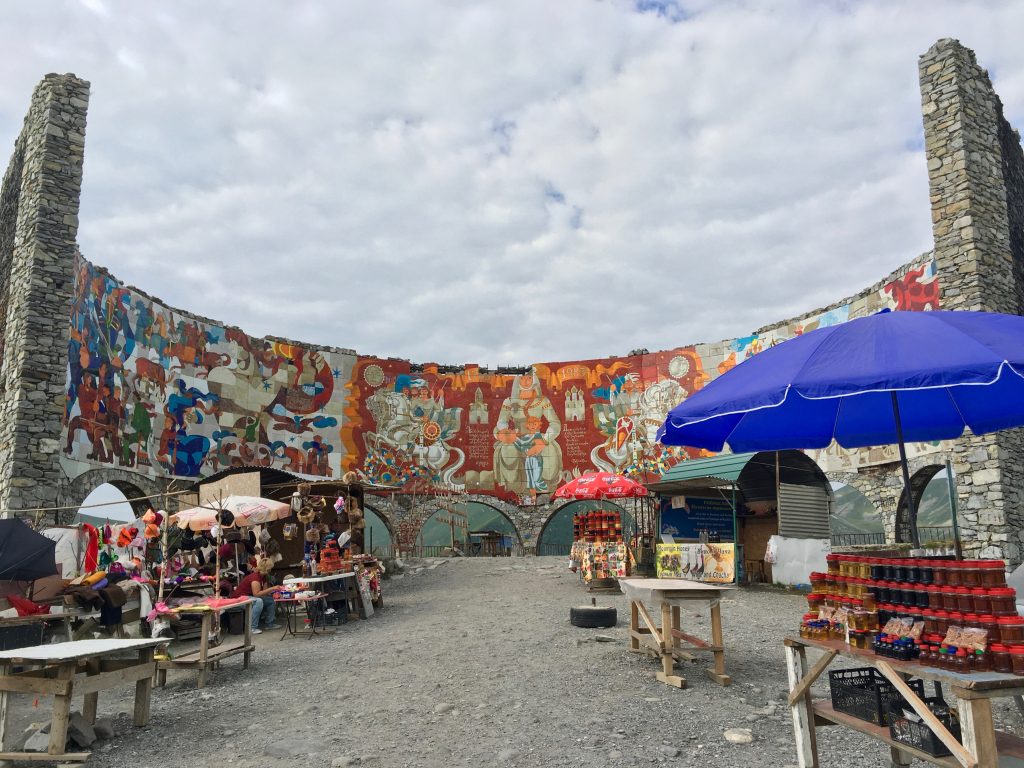 But for us, what made Georgia so special was its spectacular natural beauty –it has the tallest mountains in Europe (beating the Alps by a few thousand feet), filled with glaciers which feed all but one of its 25,000 rivers, and with forests covering 70% of the country. In sheer beauty, it gives Bhutan a run for its money.

What made it even more special for me were the series of hikes in those mountains. I got hooked on hikes since climbing Huayna Picchu in Peru the year before — a bit more than a hike; it made almost everything after that seem more like a “stroll in the woods”.

So while we visited the ruins and explored interesting places like the Stalin Museum and his family home in Gori (quite a rags to riches tale I might add — if it weren’t for the horrendous crimes he committed), what drew us to Georgia was its landscape, and the main part of our trip was the exploration of its mountains.

In Kazbegi we hiked (it was seriously uphill) through the beautiful valleys and woodlands to Gergeti Trinity Church. 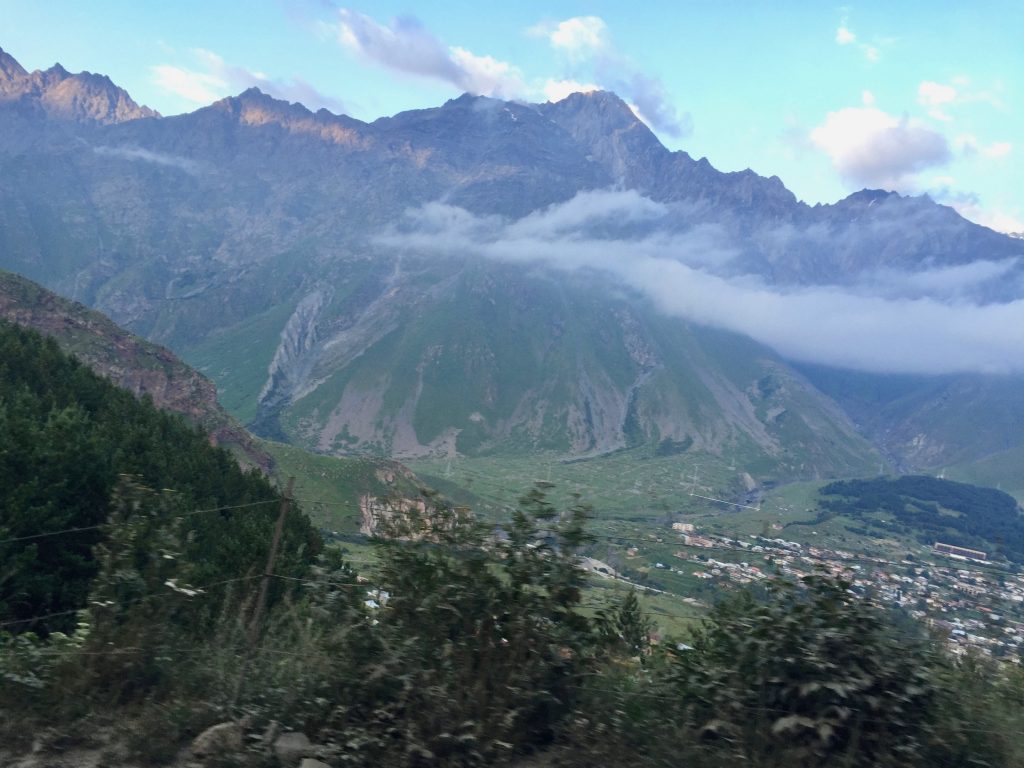 The view from Gergeti Trinity Church

The next day, it was bright and clear and from our guest house … there was the radiant 5047 meters high Mt. Kazbegi in all its glory; the highest point that is completely within Georgia’s borders. The two hundred kilometer range, part of the Main Caucasus Range, from there to Mt. Shkhara (only 19 meters higher Mt. Kazbegi and with its southern slopes in Georgia, but mostly located in Russia) is filled with massive glaciers that feed Georgia’s complex of rivers. 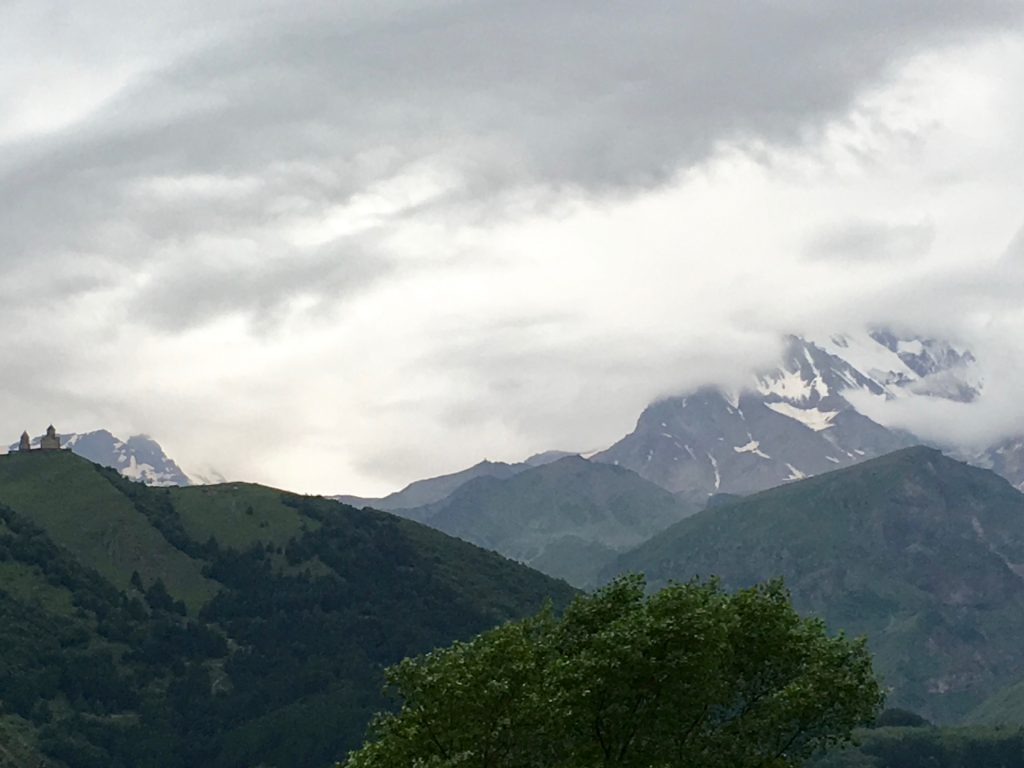 Mt Kazbegi — with Gergeti Trinity Church siloueted on the left

Later at Ushguli, with its watchtowers, and the highest continuously occupied village in Europe, we would get to see the other end of the range, Mt. Shkhara. 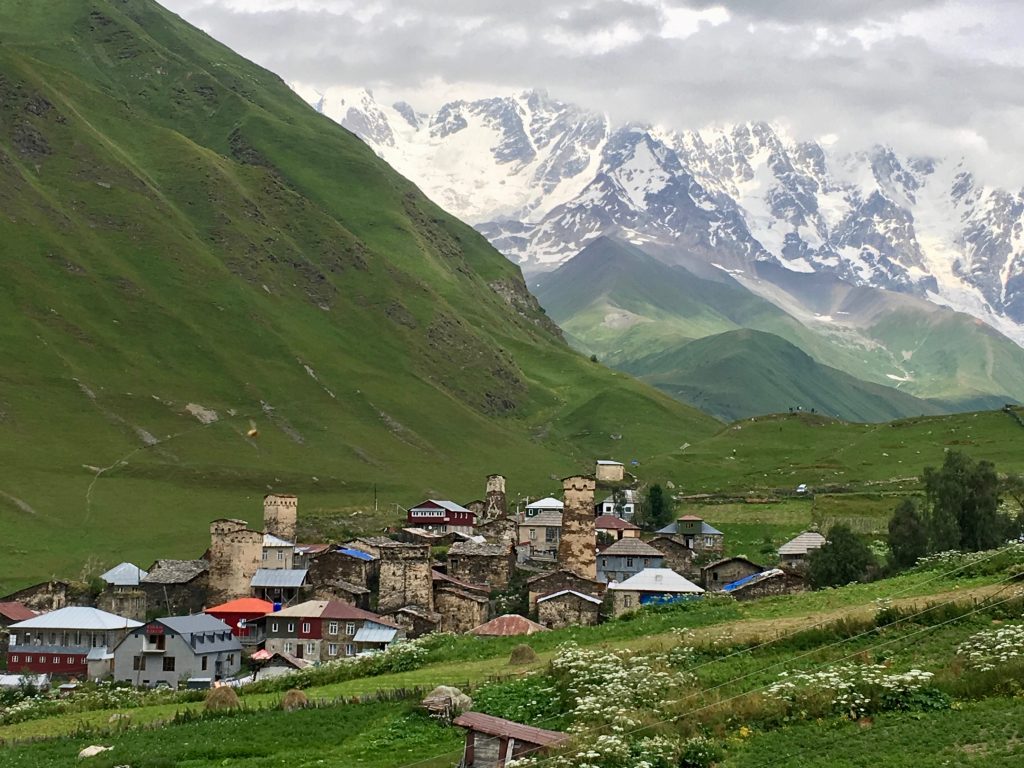 Ushguli, with its watchtowers, and Mt. Shkhara

We drove the Georgian Military Highway through the beautiful Sno Valley, and then for fifteen kilometers on mostly dirt roads to get to Juta, surrounded by stunning mountains, and where the villagers still live in traditional ways. It is completely cut off from the rest of the country during the six months of winter. We hiked from Juta with a local guide to the foot of Mt. Chaukhebi. 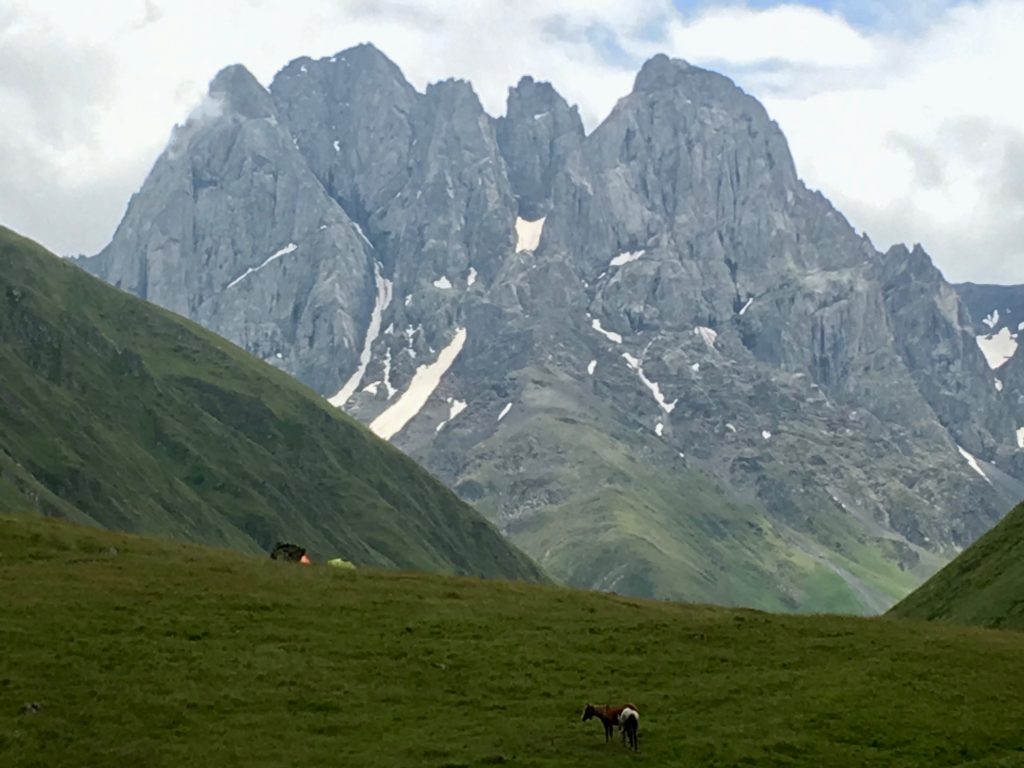 on the way to the foot of Mt. Chaukhebi

And then came the main event of our hikes — a trek to the base of Chalaadi Glacier, through lovely valleys and forests, and often along the side of the ranging Mestiachala River fed by the glacier. 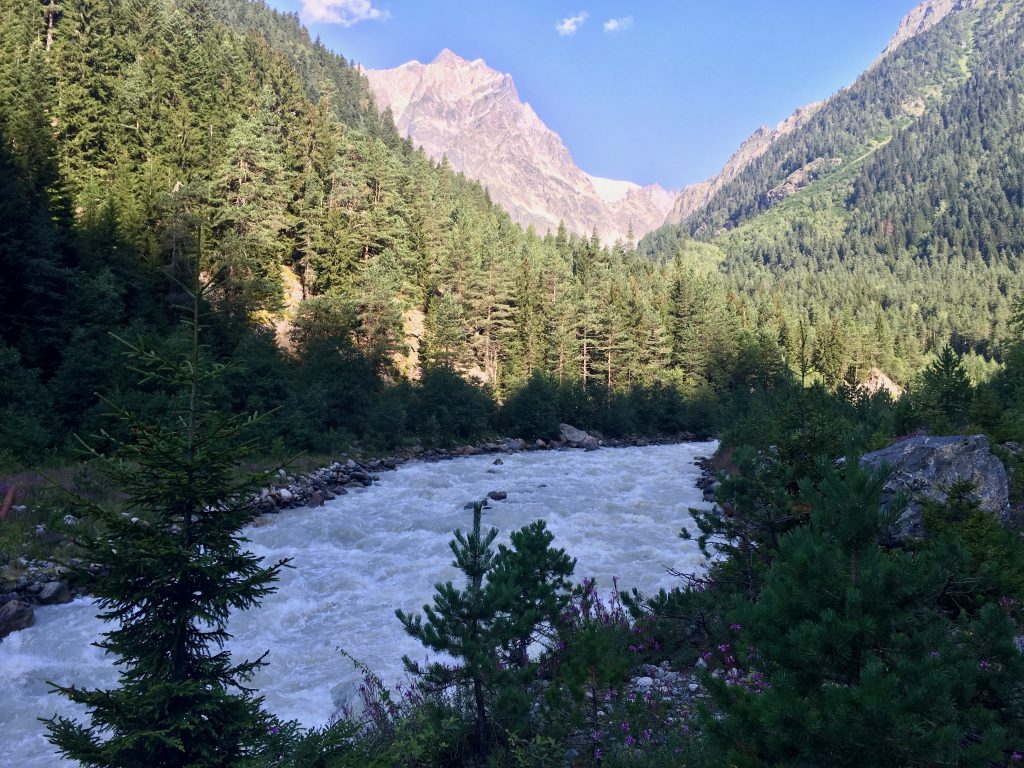 Hiking along the raging Mestiachala River

As we were walking our personal guide gave us a glimpse into the Georgian soul. “I have the best job!” she joyfully said.

We got there pretty early, and it was a beautiful day. The time we quietly sat there, with only a few other people around, peacefully enjoying the glacier, with its rock and ice slides (and at one point a small piece of the glacier breaking off and sliding into the river), is forever etched in my memory. 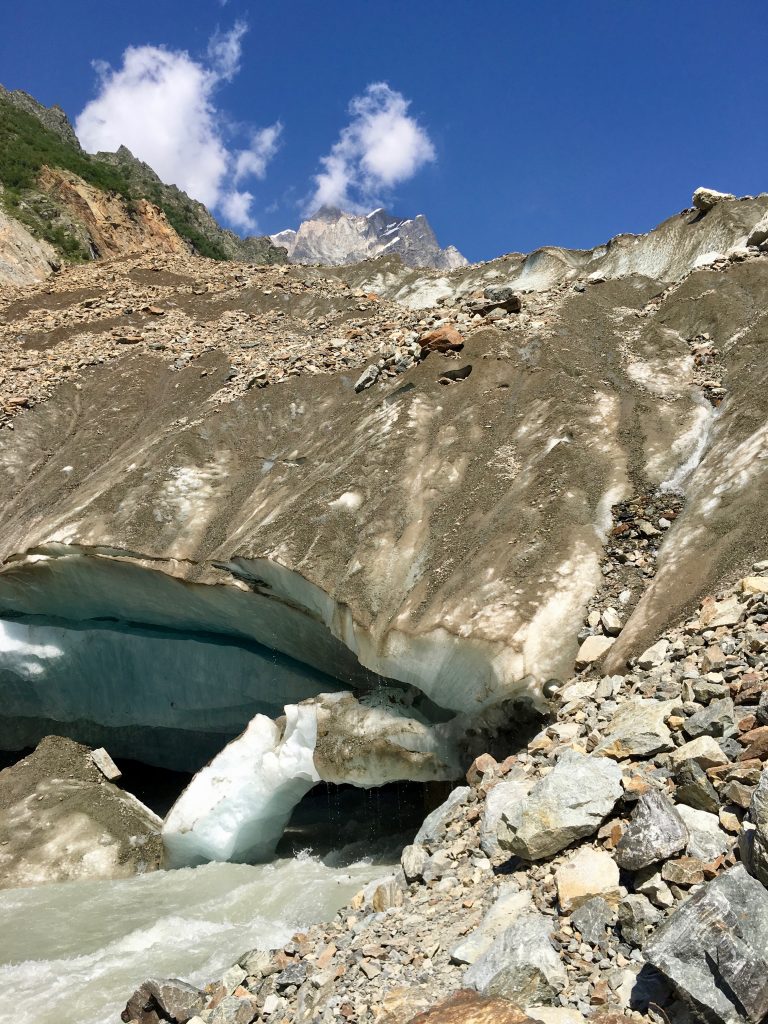 The base of Chalaadi Glacier 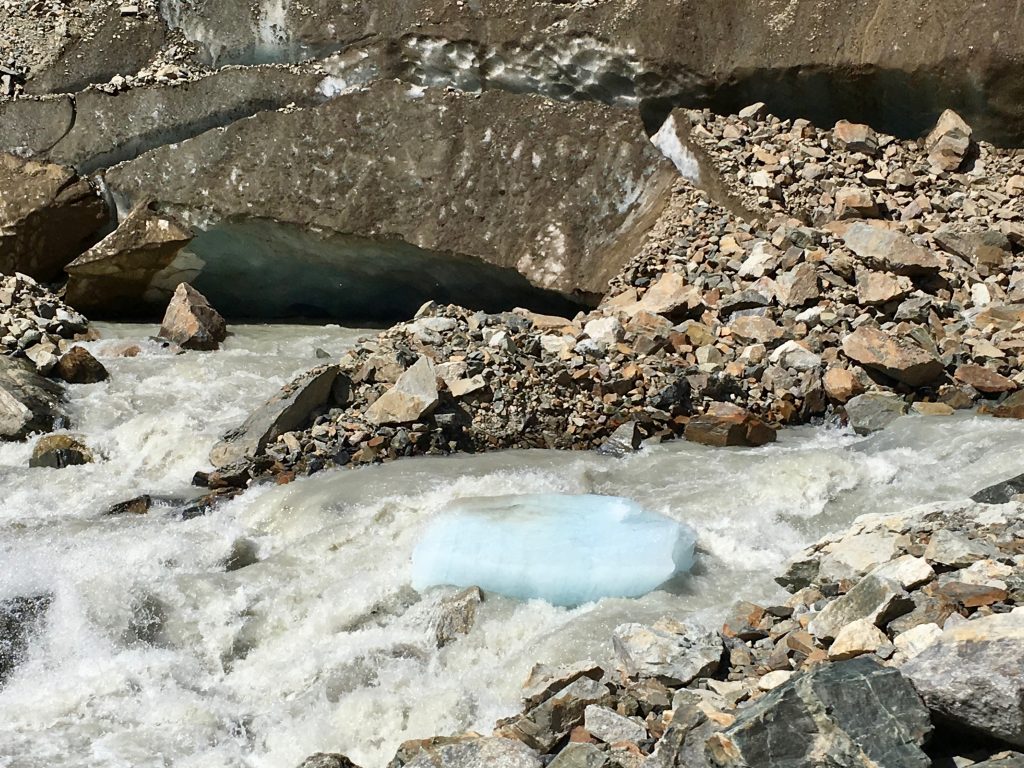 A piece of the Glacier 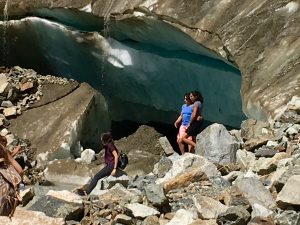 It’s never too dangerous for a photo op

Then, as the morning wore on, the hordes arrived, and reality reared its ugly head again. The rock and ice slides did little to discourage selfies and group photos at the base of the glacier. Our local guide warned them once or twice, and finally just shook his head with an attitude of weary recognition. He told us that just a few weeks before people were hurt at that point by a slide.

All in all, Georgia was a delightful addition to our trip.