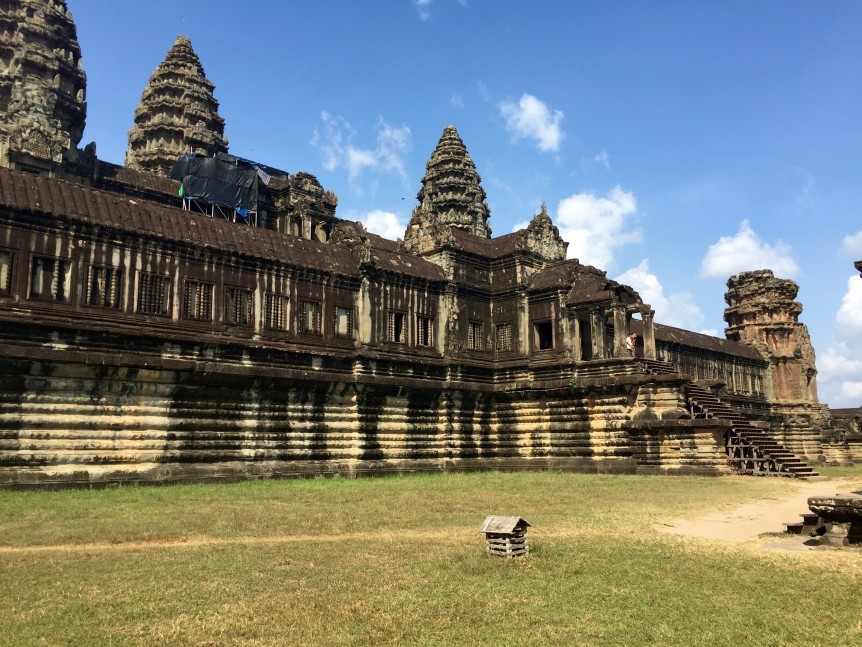 When we got to Angkor, the capital of the Khmer Empire during its golden age from 889 to 1434, we found the legendary temple Angkor Wat … and another thousand temples. But what made it even more astonishing was that most of the thousand temples were built during a one hundred year period from 1113 to 1216, when Khmer architecture and sculpture reached its height.

And yes, it was overwhelming!

But as we learned the history of Angkor, we stopped thinking about the ruins and crumbling temples as “sights”, and instead saw them as artifacts that helped tell the story of a fascinating time in history, the Angkor period, and a Khmer civilization that included much of Southeast Asia — much of what is today’s Cambodia, Thailand, Laos, and Southern Vietnam. It attracted Indian scholars, artists, and religious teachers, and although the Khmer civilization was initially influenced by Indian culture, as it evolved, Buddhism flourished side by side with the worship of Shiva and other Hindu gods.

During its peak in the 11th to 13th centuries, Angkor Thom, its capital, was the largest pre-industrial city in the world, occupying an area greater than today’s Paris.

The whole 100 year period was a time of conflict and brutal power struggles. Suryavarman II, who reigned from 1113 to 1150, united the kingdom and built the largest temple of Angkor (later to become known as Angkor Wat) over a period of 37 years. It covers 208 hectares (about 500 acres), making it the largest religious monument in the world. Angkor Wat is a stunning work of Khmer genius, built in the high classical style of Khmer architecture — grand in scale, beautiful proportioned, with balanced elements, and a devotion to detail.

Angkor Wat was built to represent Mt. Meru, the sacred mountain with five peaks that is the center of the physical, metaphysical, and spiritual universe in both Hindu and Jain (an Indian religion that prescribes non-violence towards all living beings) cosmology, The five towers represents the five peaks of the mountain with the central tower rising above the four. The towers are bounded by the walls and moat and symbolize the surrounding mountain ranges and ocean (more Hindu and Jain cosmology). A seven-headed naga (mythical serpent) at the entrance becomes a symbolic bridge to the home of the gods. In the central tower access to the upper areas of the temple became progressively more exclusive. As we went higher, the stairways got steeper, with the local mythology explaining the steepness as a way to remind people that heaven was hard to reach — but with archeologists noting that the steepness was required by the aesthetic requirements that dictated the size of the base. 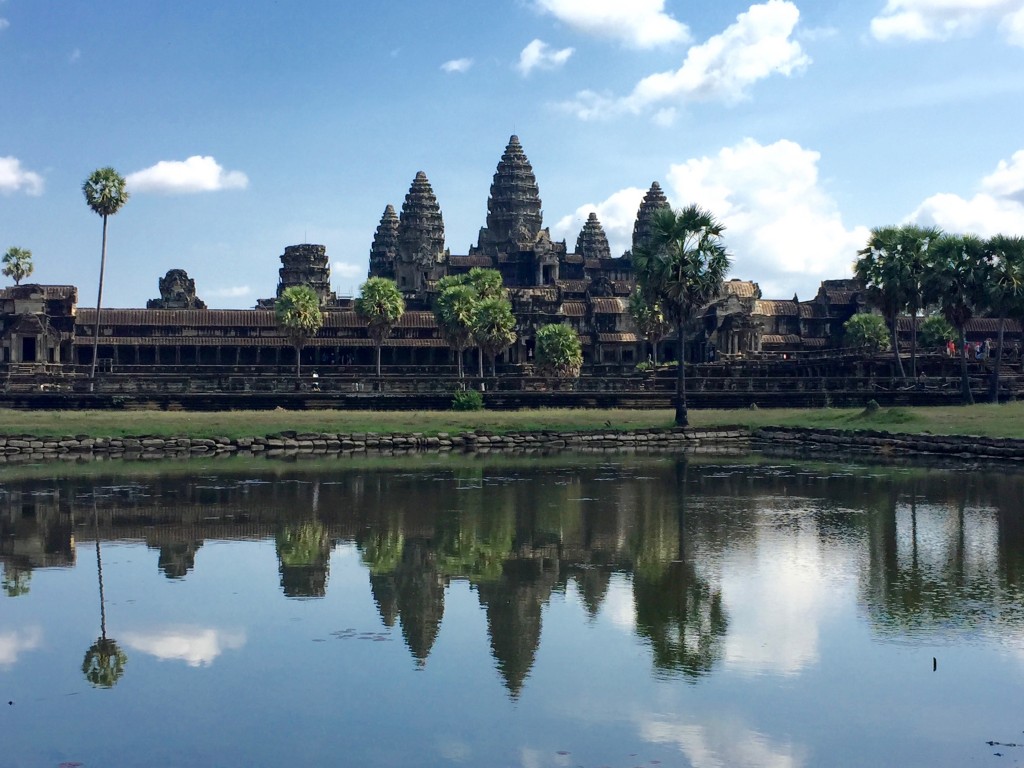 But it is not only the grandeur of the building, but also its detail work, that makes it a masterpiece. Almost every wall in the temple is covered with bas-reliefs depicting historical events and stories from mythology. 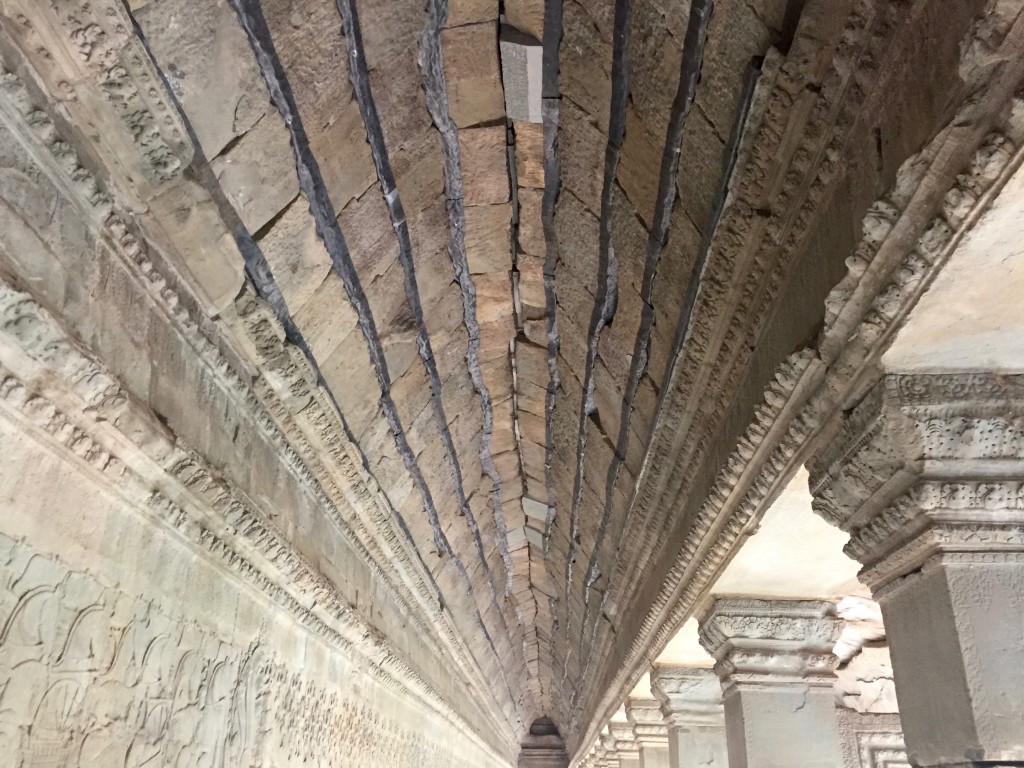 The inside still is breathtaking

And although wind and rain have eroded the relatively soft sandstone, unlike the other Angkor buildings, it was never abandoned to the elements and has been in virtually continuous use since it was built.

Almost as amazing as the temple itself is its construction. Angkor Wat was built with sandstone blocks that were quarried from the holy mountain of Phnom Kulen, more than 50 kilometers away, and floated down the Siem Reap River on rafts. According to inscriptions, the construction of Angkor Wat involved 300,000 workers and 6000 elephants, yet it was still never fully completed.

Another period followed in which kings reigned briefly and were violently overthrown by their successors. After the capital was raided and looted in 1177 by the Cham (from what is now southern Vietnam), Jayavarman who had been a military leader as a prince under previous kings, gathered an army and regained the capital, and continued the war against the neighboring eastern kingdoms, conquering large parts of their territory. He reined as Jayavarman VII from 1181 to 1218, and was considered to be the greatest and the last of the great kings of Angkor — he unified the empire and built most of the grand buildings in Angkor.

He built his new capital, Angkor Thom (great city) as a square, and in the exact center of the walled city, stands a spectacular building — the multi-faceted, multi-towered temple Bayon, which incorporates both Buddhist and Hindu iconography. While only one prior Khmer king was Buddhist, Jayavarman VII was a devoted follower of Mahayana Buddhism (probably influenced by his two wives). 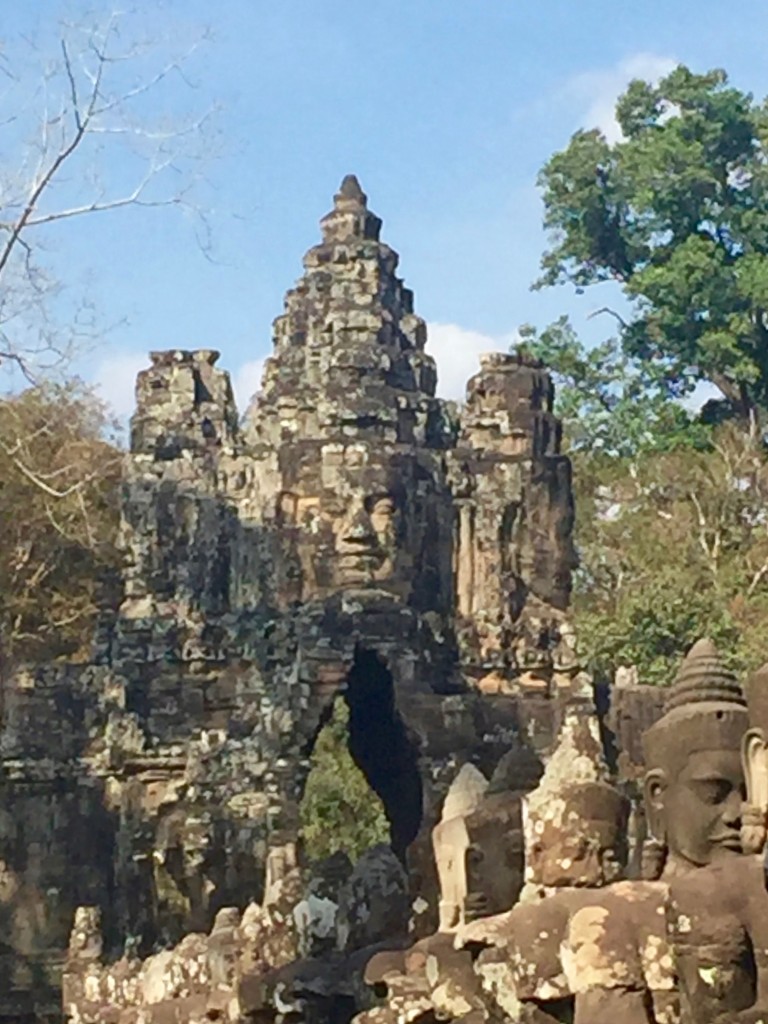 The entrance to Bayon

The main tower at Bayon, has four faces, each several meters high, bearing faces of the bodhisattva Avalokiteshvara, which keep watch at each compass point, with another 51 smaller towers surrounding Bayon, each tower having four faces of its own, each face pointing in a different direction. Its outer walls have bas-reliefs of warfare and of everyday life of the Khmer army and its followers. 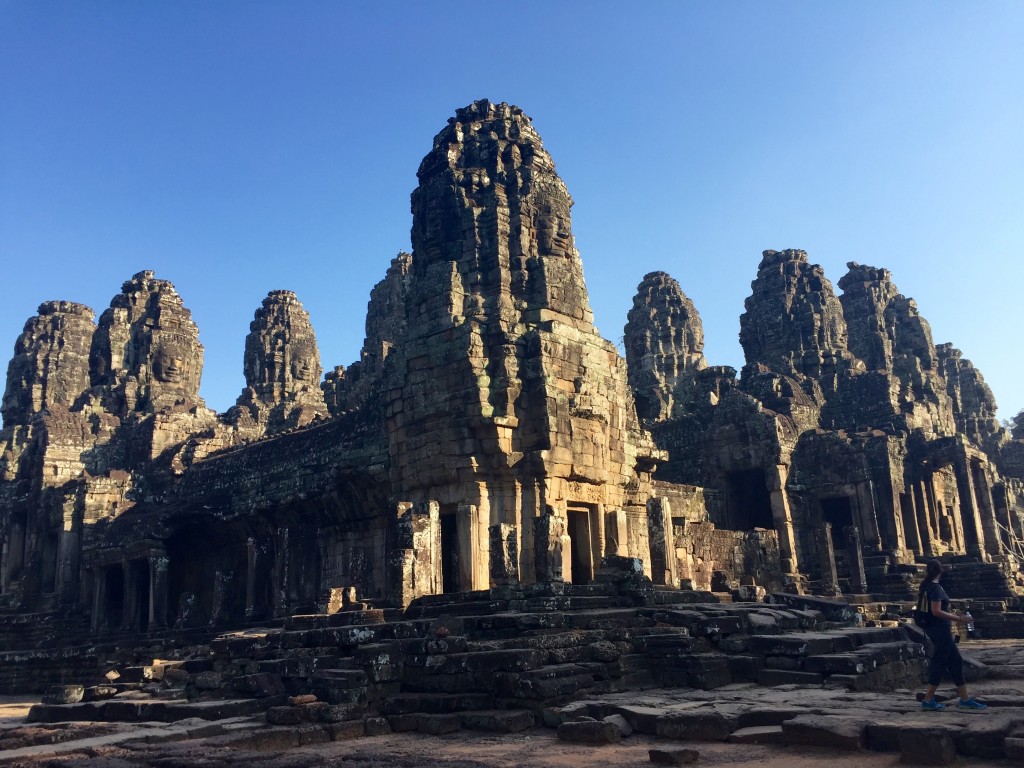 He also built Ta Prohm — which the jungle has reclaimed. Great trees grow out of temple walls, splitting massive stones in two and tumbling walls. Lichen, moss, and creeping plants live in the bas-reliefs. While it is extensively ruined, you can still explore it, although many of the corridors are impassible because they are clogged by piles of carved stone blocks. 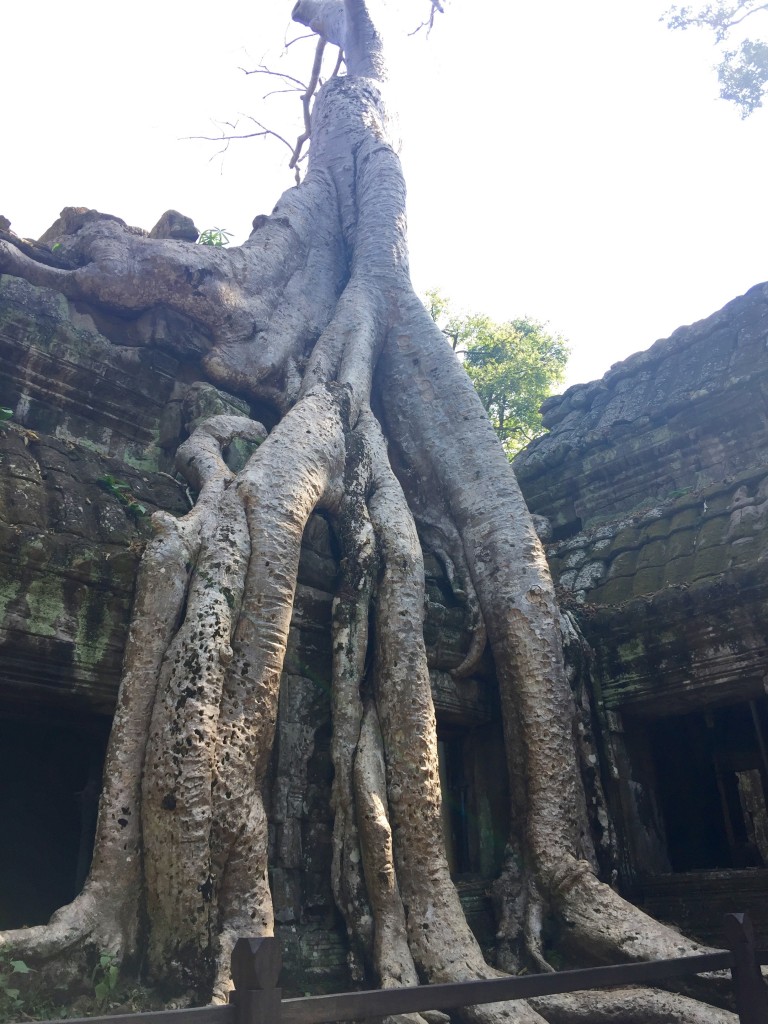 But what made Ta Prohm so fascinating to me is it is a reminder that the buildings we think we are building for eternity eventually succumb to the forces of nature. So while Angkor Wat is a monument to art and architecture, Ta Prohm is a monument to the fragility of human endeavors. Both Ta Prohm and Bayon were our favorite temples of all the temples that we visited.

After the death of Jayavarman VII (the “good guy”), his son Indravarman II, a Buddhist like his father, completed a series of temples begun under his father’s rule. He was succeeded by Jayavarman VIII, who reigned from 1243 to 1295, and is the quintessential “bad guy” in the view of most Khmer. He was not only a devotee of the Hindu deity Shiva, but was an aggressive opponent of Buddhism, He destroyed many Buddha statues in the empire, chiseled out all references to Buddhism in bas-reliefs, and converted Buddhist temples to Hindu temples. Our guide joked that people were upset when the Taliban destroyed one Buddha, which was nothing compared to the tens of thousands Jayavarman VIII destroyed. It was downhill from there, and the Khmer golden age ended in 1434 when the Thais captured Angkor, and the capital was moved to Phnom Penh.

Today, while some of the temples have been restored (like Angkor Wat), restored is a relative term, and most of the buildings are crumbling — they were built with sandstone which is relatively soft, and significantly eroded by a thousand years of wind and rain. There is a constant battle between the reconstructors and the forces of nature (and I don’t use that term lightly) to keep it together. Then there were the looters, including the Khmer Rouge (who also destroyed temples and written records), and the occupying Vietnamese Army (there to “liberate” Cambodia from the Khmer Rouge) who, well aware of the value of Angkor art in the West, and removed pieces by the truckload.

The area is now a UNESCO world heritage site, and while money is available to restore the area, it is also, like at Machu Picchu, the cause of another problem — tourists. 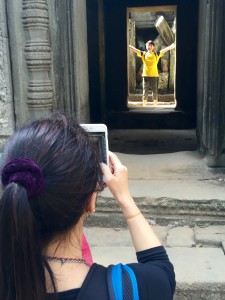 It’s all about us

Angkor Wat has become a mecca for tourists and their obsessive taking of selfies and pictures of each other with the temple in the background and its significant features obscured. Even worse, in February 2015, two American sisters were arrested in Cambodia for taking partially nude photographs of each other in the Angkor Wat temple complex, This happened less than a month after three French men were arrested for doing something similar.

We explored Angkor in a tuk-tuk with a guide and driver, which for us was the perfect way to do it. We were right there, feeling the breeze, and seeing, hearing, and smelling what was around us. (Some people we had met rented bicycles and felt the same way, or maybe even more so)

I think we had some sort of romantic notion of what we would see and experience, which, in a few days, we were disabused of. I don’t mean to sound like a philistine, but after Angkor Wat, Angkor Thom, Bayon and Ta Prohm, the additional 26 temples we visited, granted with some significant exceptions, all began to look like variations on the same theme — crumbling due to time and weather, defaced by Jayavarman VIII, and looted.

But the positives way overshadowed the negatives and it was truly an amazing experience. The story of the golden age of the Khmer is a fascinating one, and you should go to Angkor while you still can. It is a tribute to the greatness and magnificence of the Khmer empire that, given the Eurocentrism of our culture, we knew little about before we came to Cambodia.