We spent the first full day recovering from jet lag, and getting ready to attend the jazz festival. When we got to Kaliningrad on Thursday, it had been cold and raining for a week, and the weather was hardly what one would call summery. The Jazz Festival was being held at night for three nights, starting on the next night, Friday, July 31.

Not really prepared for how cold and damp it would be, we were still deeply into the illusion of “how cold could it be in Europe in the summer?” It rained all day Friday until about 4:00 pm and I had, for some long forgotten and unknown reason, assumed that the chairs were going to be plastic, so I brought a wad of toilet paper from the room that I could use to wipe them off — I was proud that as tired as I was, I had thought to be prepared. Unfortunately, the seats were wooden bleacher seats and while there was nothing to wipe off, they were still very damp, through and through, after a week of rain.

We began to feel as if we were back in San Francisco on a not uncommon foggy and damp night. 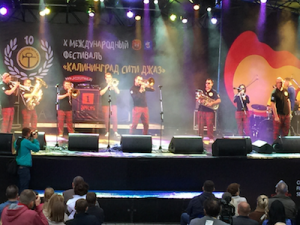 The first group we heard was the Königsberg Brass Band, and we made the logical leap that these were hometown boys and girls (which they were).

The venue was small and intimate enough. I estimate there were 2500-3000 or so people there, and the crowd really got into it, as did we. What was very interesting, and I don’t mean to be  condescending, was how stylish the women were, with quite a few short skirts and designer jeans and lots of high heels. I suppose I was still stuck on the cold war image of the dour and frumpy Russian.

By the end of the first act we were pretty cold and my jeans were on the wetter side of damp after sitting on those still very damp wooden bleacher seats. 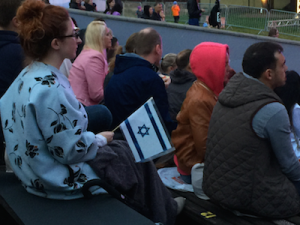 The second act was an Israeli funk, jazz, and groove group called the Apples. The audience was really getting into it now, with lots of people dancing off to one side. And as the band got hotter and hotter, we were getting colder and colder. I haven’t felt that cold since a San Francisco Giants day game at Candlestick park in August.

We decided we needed to get warm, and we escaped into a semi enclosed restaurant. Tea seemed to be the best thing — we were skittish about coffee keeping us awake. As we stood  in line, we struck up a sort of conversation with the couple in front of us. I say sort of because they barely spoke English but gave it a real try. I asked them about tea, and they told us, “No tea, coffee.” As we got closer I summoned the power of wishful thinking and asked again, “Are you sure?” They asked the cashier, who reassured us there was no tea.

So we got out of line and sat in the relative warmth of this mostly open air structure, and decided we needed to get back to the hotel before we died of hypothermia.

As we were walking out, the guy we had been talking with came rushing up to us. He had somehow found some hot water that he had put into two of those transparent plastic beer glasses, and two tea bags. Before we could really thank him he rushed off back to his wife.

The second night, we were better prepared, and the weather was a bit warmer and drier. The seats had dried out, and we were wearing our lightweight down jackets with the right number of layers underneath. We stayed until more or less the end, and arrived back at the hotel a little chilled (it had gotten down to 48 degrees by this point) but not that uncomfortable.

We are beginning to really like Kaliningrad. While most people barely speak English, most try to help us out as best they can — from the woman in the bank who went out of her way to help me change my larger bills into smaller ones (Russian banks don’t work quite the same way as American ones do), to the woman in the park that reopened her closed ice cream cart to give Linda a scoop of ice cream.

On the other hand, Kaliningrad is certainly not a tourist city, and it is without the infrastructure to help out tourists. There is not that much to see and do, and we hear no other languages spoken other than Russian. And it’s very European Russian; we haven’t seen any people of color, except those playing on stage.

It appears, based on our brief set of experiences, that in the Russian culture there is a special place for families and children. We saw lots of children at the festival, and when we were departing from Los Angles there was a women with a baby in a stroller in front of us in the Business Class check-in line. She told us they had sent her to check in here because the line was shorter and it would be easier for her with the baby.

And right before we took off, we noticed that business class wasn’t full. At that point they moved several families with small children into business class to make it easier for them.

All in all, a good place to start our trip.