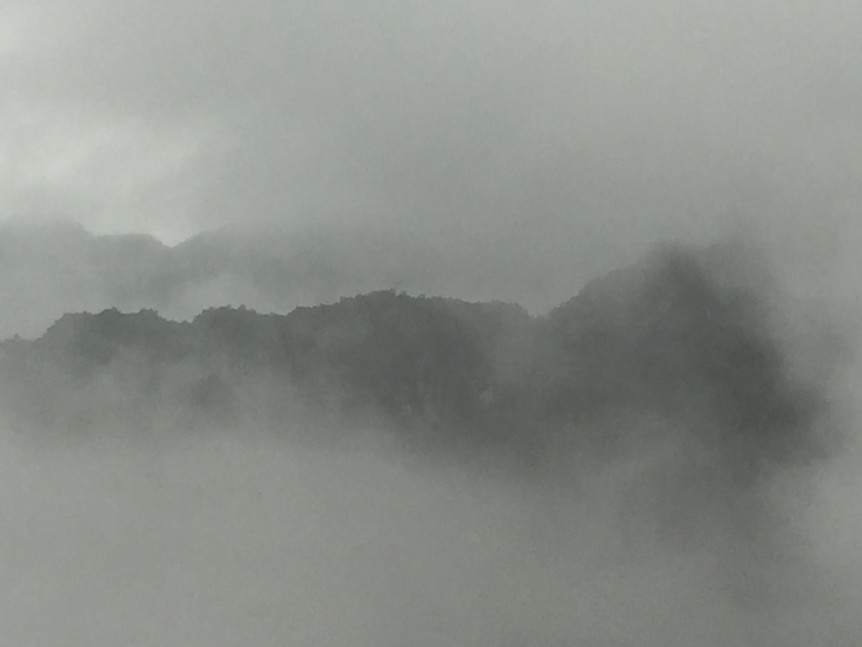 The next day, after my quasi-religious experience at Machu Picchu, I returned to climb Huayna Picchu — the towering mountain behind it. The peak of Huayna Picchu is about 2,720 meters (8,920 ft) above sea level, or about 360 meters (1,180 ft) higher than Machu Picchu. The Incas built a trail up the side of Huayna Picchu and temples and terraces on its top. While it looks like it would be difficult to climb without climbing equipment, and it can be a strenuous climb, steep and at times exposed, the steps that the Incas carved out of the rocks makes it less so. While some portions are slippery (especially in the rain as I found out), steel cables (via ferrate) help make the climb easier (but not to be confused with easy).

It was harder to figure out how to get tickets to climb Huayna Picchu than to climb it. The main reason I used a Peru-based travel agent to plan our trip was because how to get tickets to both it and Machu Picchu was neither obvious nor clear on the websites I looked at. And since we didn’t have a lot of time to do it, and the number of tickets for the train to the town of Machu Picchu, and admission to Machu Picchu and Huayna Picchu are limited, a travel agent seemed the best route. The number of visitors to Machu Picchu is limited to 2500 per day (only theoretically I found out later), and there are only 400 people per day allowed into Huayna Picchu (in this case true). This 400 is divided into two groups – departing at 7 AM and then 10 AM.

I had tickets for the 7 AM group, but since I was told that I may have to wait in line for more than an hour for the morning buses up to Machu Picchu, I decided to leave early, very early.

When I got to the bus stop for the ride up to Machu Picchu at 4:15 AM (that should give you some indication of how excited I was to do the climb), there was already a long line, with people anxiously guarding their places. The buses weren’t supposed to start running until about 5:15, but, as they say, “hope springs eternal.” Many of the people were in line hoping to see the 5:17 sunrise at Machu Picchu, and unless a miracle occurred, always a possibility at Machu Picchu I’ve been told, at best they would be on the bus at that time. I was there just to make sure I could start my climb at 7 AM. But then again a part of me would have liked to see the sunrise. I could have hiked up the mountain instead of taking the bus, but the town of Machu Picchu is at 2,040 meters, and Machu Picchu and the Huayna Picchu climb from Machu Picchu starts at 2,430 meters with the summit at 2,720 meters. Since the hike up Huayna Picchu seemed to be straight up, I decided to save myself for the hike — again letting discretion be the better part of valor.

As everyone in line watched, the first bus started up and opened its doors at 5. The line came alive as people started to move towards the bus, hoping the aforesaid miracle had occurred, but it was for employees only.

As dawn approached, it started to get colder … and it started to rain. I had told Linda that since I didn’t have the right equipment, I wasn’t going to be stupid and attempt the climb in the rain. But I was already there, and I had also been told that the weather at Machu Picchu could be different from that of the town’s, so wishful thinking won out, and I stayed the course.

By the time the first bus got there, I could no longer see the end of the line and any sense of camaraderie was gone as people jostled to get on the bus. As we started to board, late comers did a good job of just walking up to the front of the line, standing off to the side, and then blending in as people got on the bus.

Now I’ve done a number of dumb things in my life, but thinking about climbing Huayna Picchu, in the rain, with skateboard shoes, and only a half a bottle of water (I thought I had more water, and the skateboard shoes were the best shoes I had) would have ranked medium high in the list. I had decided, much to Linda’s relief, that I wouldn’t do the climb if it were raining, but there I was, and my resolve was washed away by the sight of the mountain and the realization that if I didn’t do it then, I would never get another chance. Besides, there were steps, weren’t there?

The climb itself was not that difficult, I only slipped and nearly fell to my death a few times (I exaggerate for dramatic effect here, although I did slip a few times). It was cold and wet and, despite that, it was exhilarating.

I was one of the first to get to the viewing platform at the top, where every once in a while I could see Machu Picchu below through the clouds. The magnitude and grandeur that is Machu Picchu was breathtaking — at least what I could see of it. The viewing platform seemed to be the end of the trail, but from what I remembered there should have been another trail that led to other places on the mountain and back down as well. But all we (there were quite a few of us by this point) could see was a slit in the rock face that you could barely squeeze through. And did I mention that it was raining steadily the whole climb? 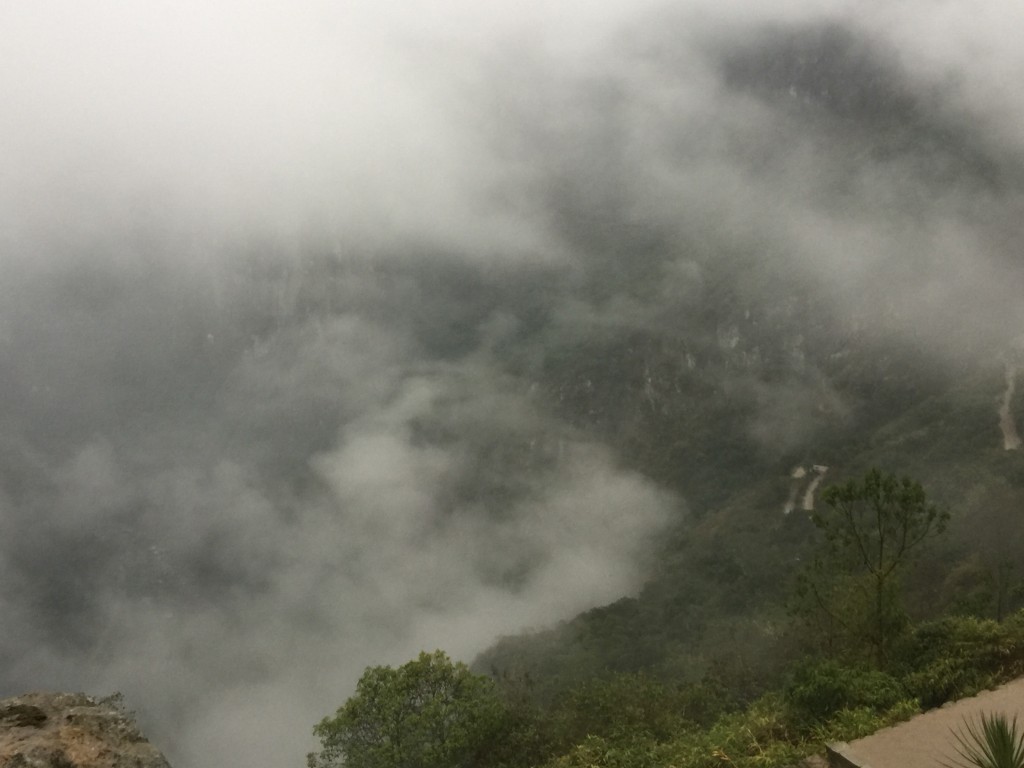 From the viewing platform 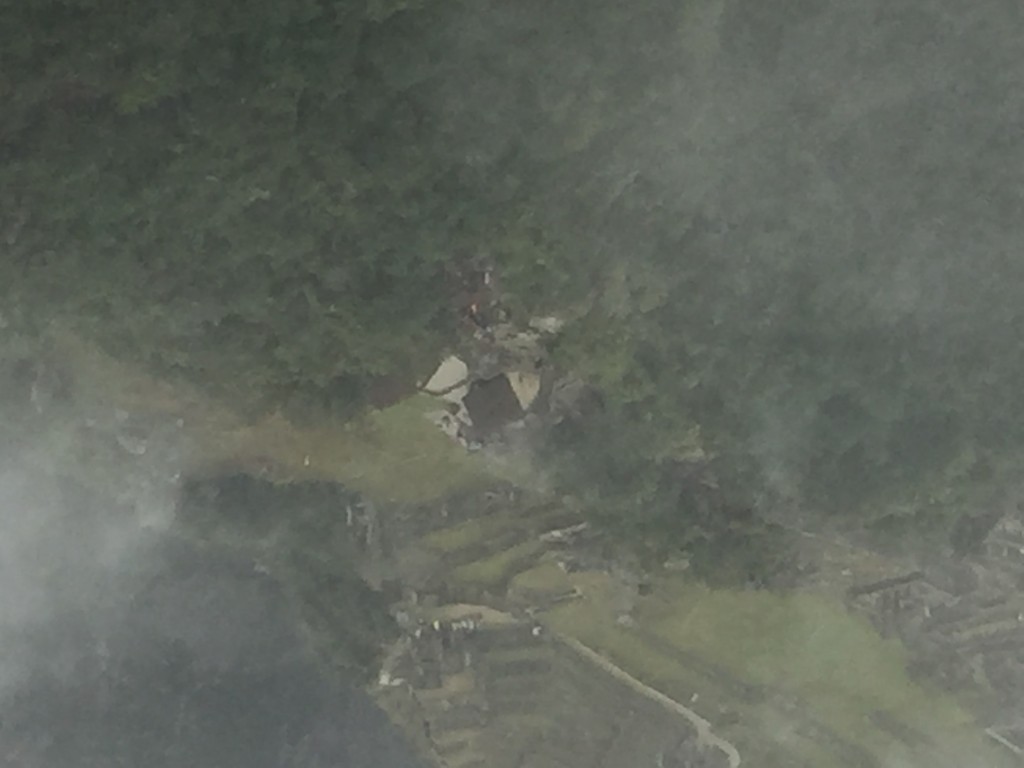 The view from the top

Finally another group came along, much better prepared than any of us were, having read about the climb and studied the map, and we followed them through the slit in the rock face. I found a tunnel carved in the rocks that was filled with water, where I got even wetter.

Finally, I got to the real top, and even though I could only rarely glimpse the view, the importance of it had faded, For me the climb was never to get to the top and take pictures of the magnificent view of Machu Picchu below, the one you see in the postcards and photos. The point of the climb was the climb itself — the climb up the mountain, in the footsteps of the Incas, on the steps they carved out of the rocks, and then to see buildings built in impossible places — they seemed almost glued to the mountain side with a sheer drop of a couple of hundred meters. 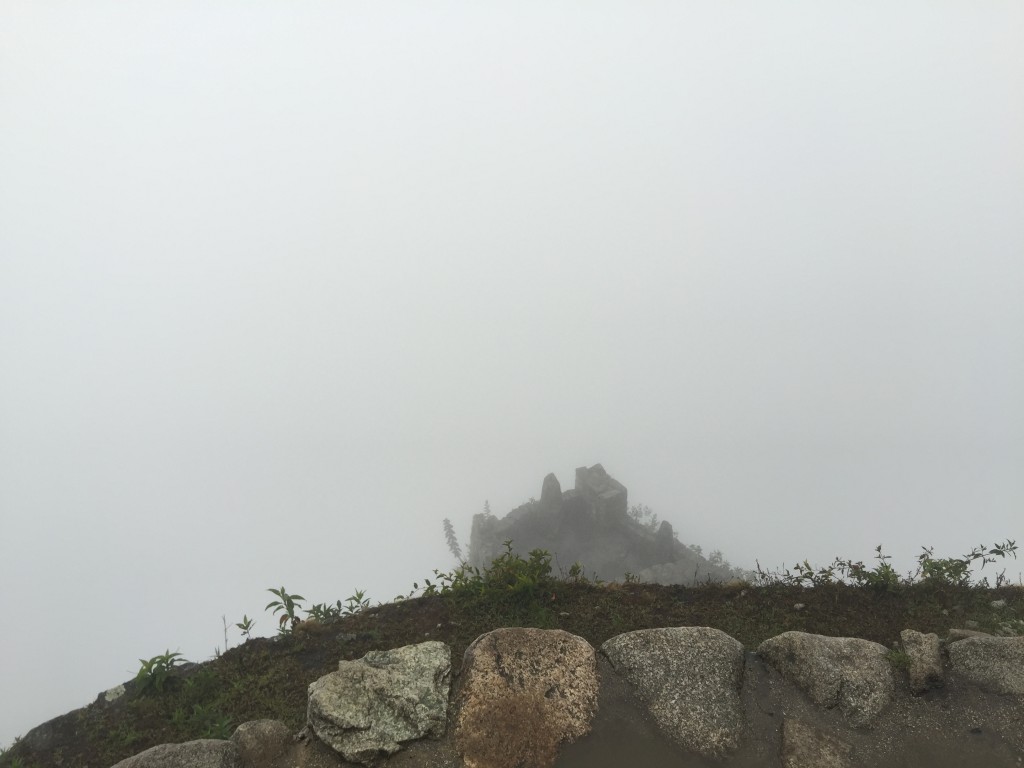 An Inca structure from the top

When I finally got back to the hotel I was soaking wet. I spent the next two hours standing in front of the fireplace in the lodge to dry my jeans, with the hotel graciously offering to dry my shoes.

But despite all of that discomfort, it was worth it, and I would do it again in a heartbeat, although I can’t adequately articulate why. As I think about it though, perhaps it was as Edmund Hillary said (although the climb was in no way even close to that of Mt. Everest), “It is not the mountain we conquer, but ourselves.”