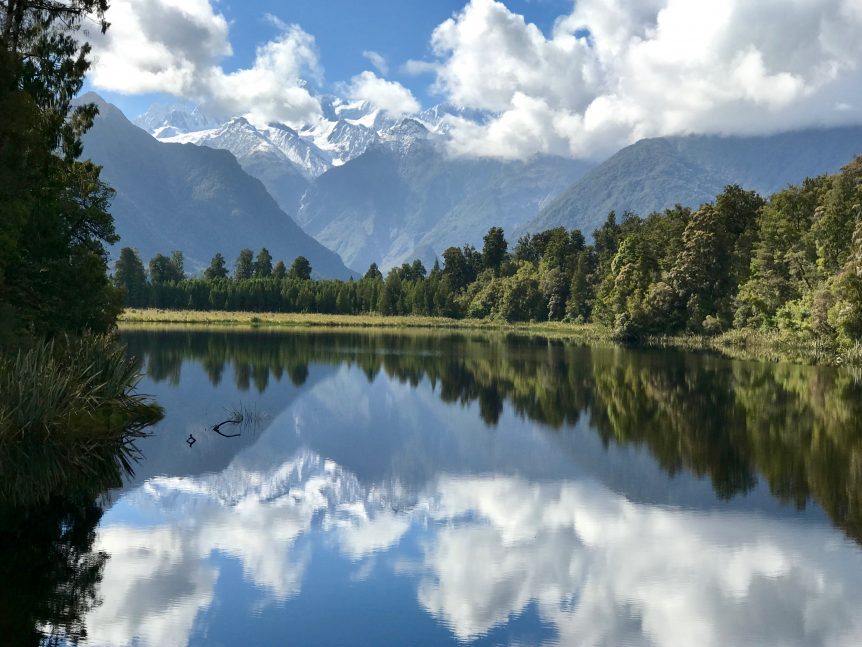 When we returned to the United States in November, we found a deeply divided nation. As Linda put it,“I never realized how angry people are. This is really sad.”

When we left in January, the United States was even more divided. On one side there were the people energized by Trump’s victory and his vows to reduce the impact of government on their lives, bring jobs back to the US, and return the US to greatness. Across this deep and wide divide, there were the people concerned about his policies, ethics, strategies, and tactics that appeared to be similar to the ones the Nazis used to seize power, the reduction of important discussions to personal attacks, and the even further reduction of truth in public discourse.

While it was a relief to leave, we were deeply concerned about the welfare of our family, friends, our country, and the impact the new administration would have on the poor and disenfranchised.

We started this phase of our world tour in New Zealand even though before we started traveling we had made a solemn commitment not to return to any place we had already visited. But New Zealand was indignant, vociferously complaining that she had been given short shrift — timing issues had allowed us to spend only three weeks there — and there was a long list of places we still wanted to see. In the end, fairness won out, and we decided to spend another three weeks in New Zealand on our way to Tasmania.

Two of the things we were looking forward to were taking the TranzAlpine train through the Southern Alps, and seeing Mount Cook. We would start by taking the train from Christchurch to Greymouth (the preferred direction for seeing the mountains), rent a car in Greymouth, and start our New Zealand road trip at Fox Glacier. We’d spend a day there seeing Mount Cook from the west (and hoped to see it reflected in Lake Matheson), then drive around the bottom of the Southern Alps through Haast Pass to see Mount Cook from the east.

A perfect plan— I thought.

And it would have been had fate not gotten in the way.

Our flight from Phoenix to Auckland and then to Christchurch went off without a hitch. I had booked a motel a few minutes walk from the train station (a significant victory for planning in advance), and in the afternoon I even walked over to check it out.

So far so good — there would be no surprises here — or so we thought.

The train was scheduled to leave at 8:15 am, and the next morning the owner of the motel drove us to the train with no problem. No problem that is, until we got there, and as we were getting out of the car, a random stranger telling us the train had been canceled. I thought (hoped was a better word) he was joking, or even delusional, until I went into the station and found out that a landslide the night before had blocked both the train tracks and the road to Greymouth, making a bus ride, or even driving to Greymouth, impossible.

After a bit of a scramble, a lot of time on the phone (long ago we learned to get a local phone as soon as we arrived in a new country), and with a lot of help from the car rental people, I changed the car rental pick-up from Greymouth to Christchurch, took a taxi to the rental office, picked up the car, and off we went. It would be a 10-hour car trip that would take us through Haast Pass and get us to Fox Glacier and Lake Matheson, where we would pick up our original plan — the next day going back through Haast Pass to see Mount Cook from the other side.

Everyone told us that this was a two-day drive. But undeterred by reason, logic, and local wisdom, we soldiered on, and got to our hotel early that evening after a beautiful, albeit somewhat grueling, drive. 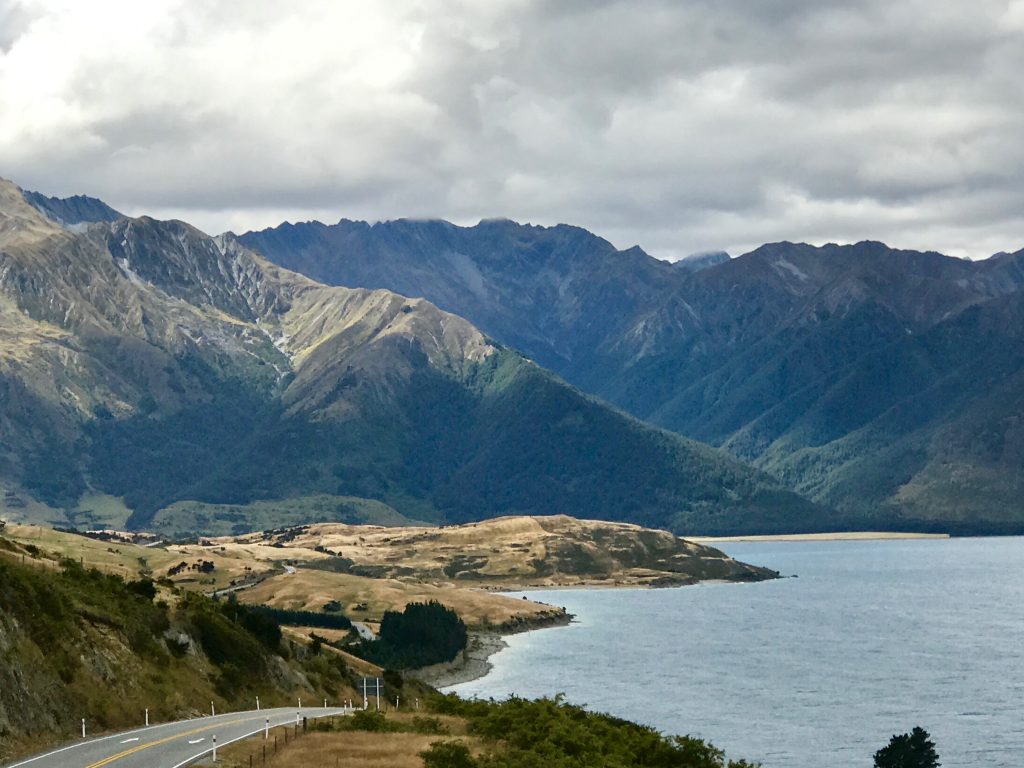 On the way down from Haast Pass

Given our luck so far, and the New Zealand weather in general, we were hoping against hope to see Mount Cook reflected in Lake Matheson … but the next day was perfect, and we did. 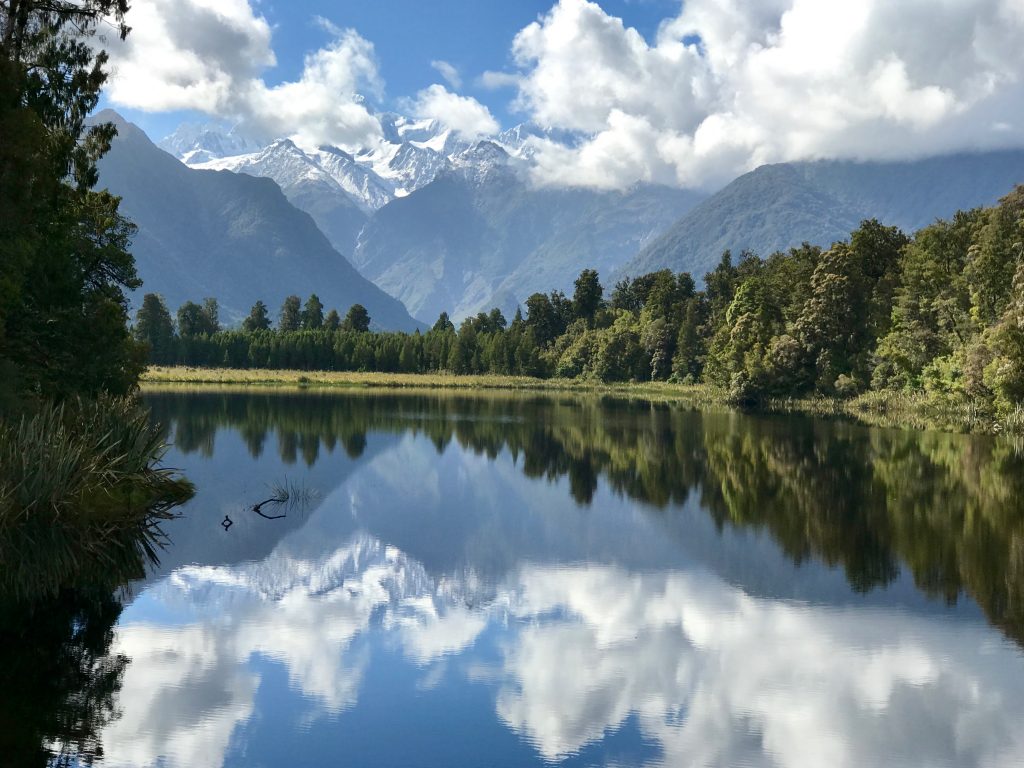 It does look like it does on the postcards 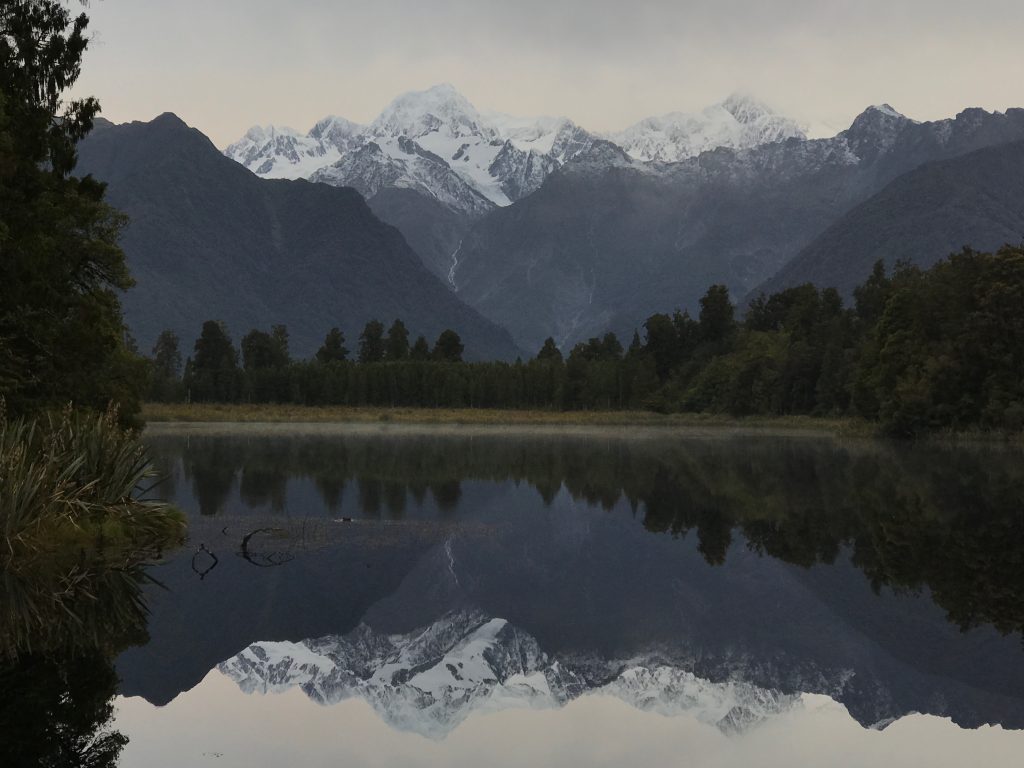 According to our original plan, the next day we would drive through Haast Pass to Twizel, where we would spend the night, and then drive up to Mount Cook the day after. A good idea in theory, except we woke up to a cold, gray, and wet day. But then again, what seemed to be getting to be a theme for our trip, the day after again was picture perfect and the Mount Cook we explored looked exactly like it did on the postcards (we have friends who live in New Zealand who later told us they had never seen it as clearly). 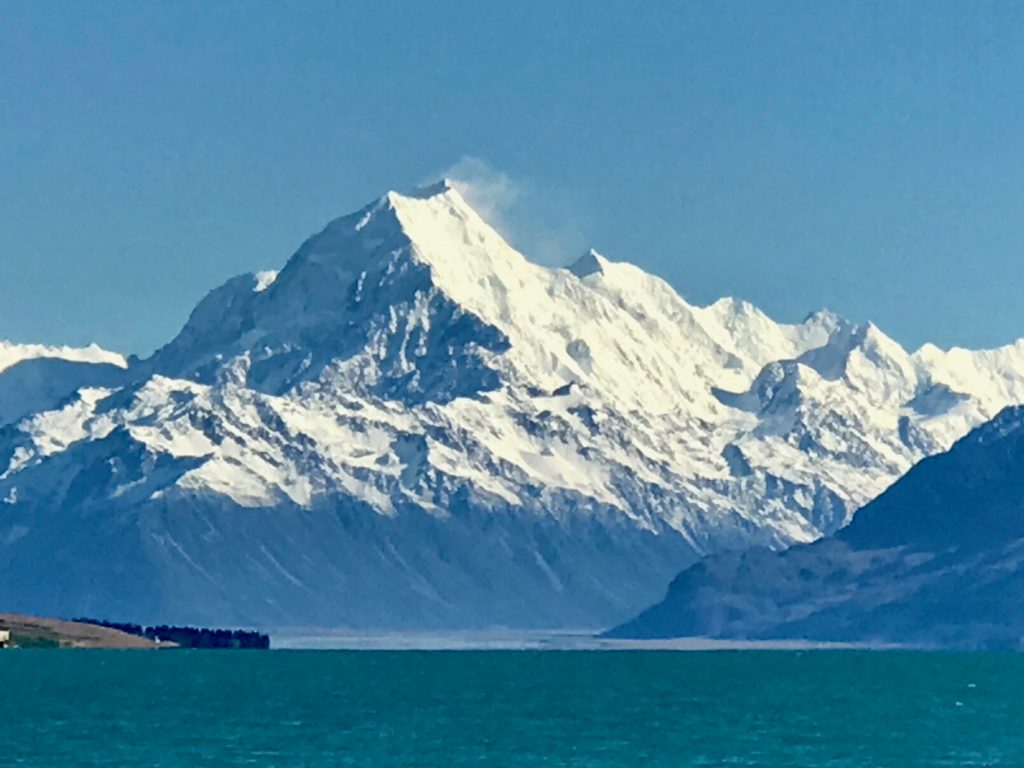 It doesn’t get any better than this

It was that sort of trip, reminding us that while there are disappointments in life, life is so much sweeter when things do work out.

In New Zealand (and this could have happened in any number of places outside the US) our experiences got us out of our heads (where we had been spending most of our time in the aftermath of the election) and back in touch with the here-and-now of the physical world. As we traveled we found, as we had before, a world of beauty and kind, compassionate people, and while we still had our concerns about the future of the United States, grounding ourselves in the world and people we met outside the US gave us a more well-rounded perspective.

There was the couple from England who we saw at Mount Cook, and that we ran into in a tapas restaurant in Nelson, and then again in a restaurant in Rotorua where we ended up having dinner with them, and then at Green Lake and Blue Lake where we said goodbye again, only to run into them one last time in Paihia when we got off the ferry and turned the corner. This time for a final final goodbye— or until we run into them again someplace else in the world.

There was staying with some “friends,” who we had never met before, on their farm on the North Island where they raised goats and bees, and much to my amazement, even made their own cheese. 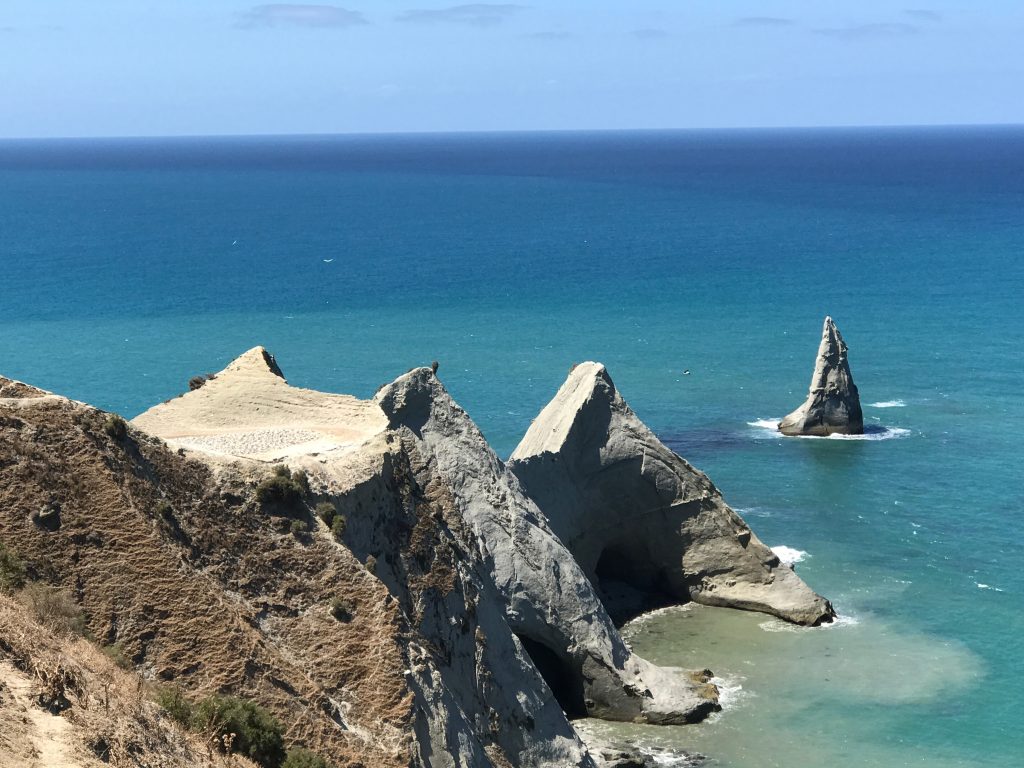 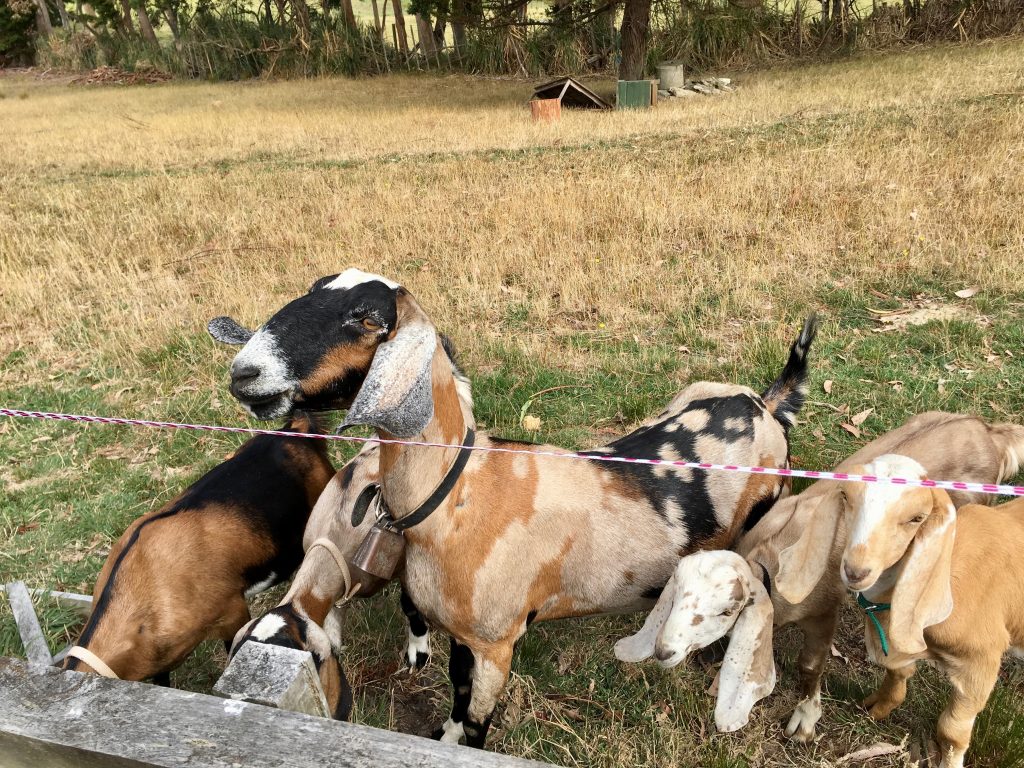 The source of some great cheese

They were friends of a friend who had introduced us by email, and we had been corresponding since 2015. They were expats who left the US in 2002 looking for a new place to live (now New Zealand citizens) and had settled north of Auckland. After being in New Zealand we could understand why they settled there.

Again the real world reasserted itself. Through no fault of there’s, our visit did not start well. I managed to slide the rental car into a ditch and had to be pulled out by a friend of their son. What was so remarkable about the experience, other than my ineptitude driving a right hand drive car on a gravel road, was how normal helping others was — something we found throughout New Zealand and, thinking about it, through all of our adventures around the world — people acting as if helping strangers, and not expecting anything in return, is the natural way to live. The rest of our time with them, and in fact our entire time in New Zealand, was like a trip back to an idealized 1950s in America.

There was the Bay of Islands with another picture perfect day. We took a trip by boat around the Bay, and saw dolphins and flying fish (how cool is that). We fell in love with the place and were sorry we couldn’t spend more time there (but no, there will not be a third trip to New Zealand in the near future). And while other people were pretending to enjoy a swim in the cold waters as we took a break on an island, we had a wonderful conversation with the boat captain about her life in New Zealand and how much she wanted to travel. 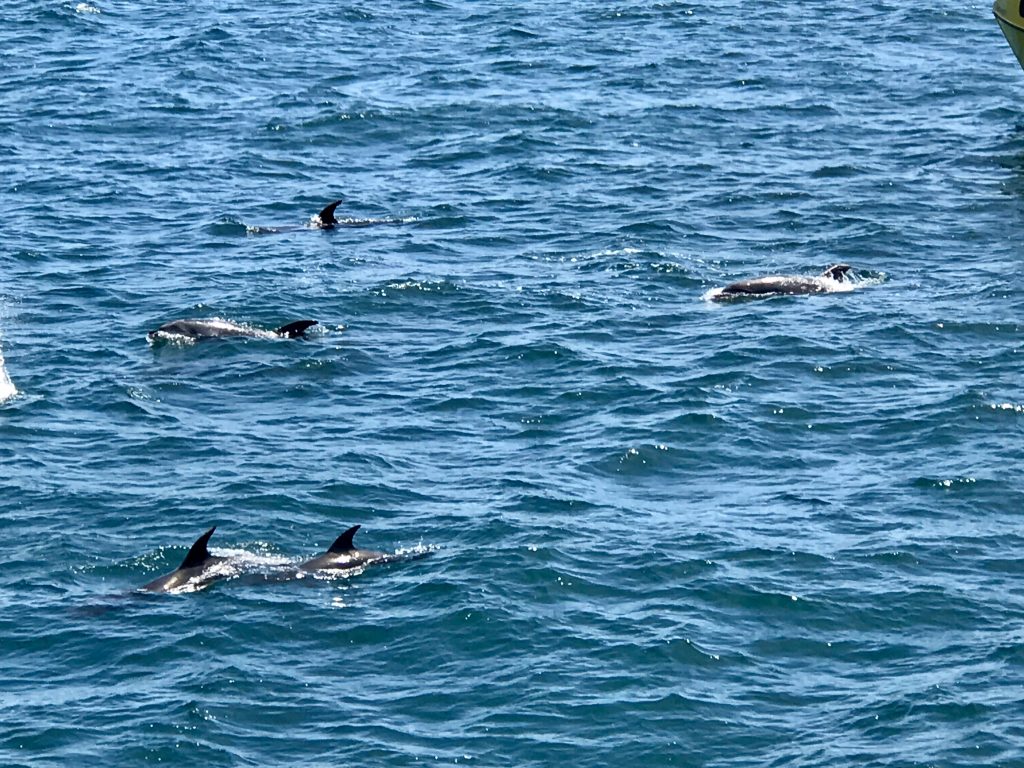 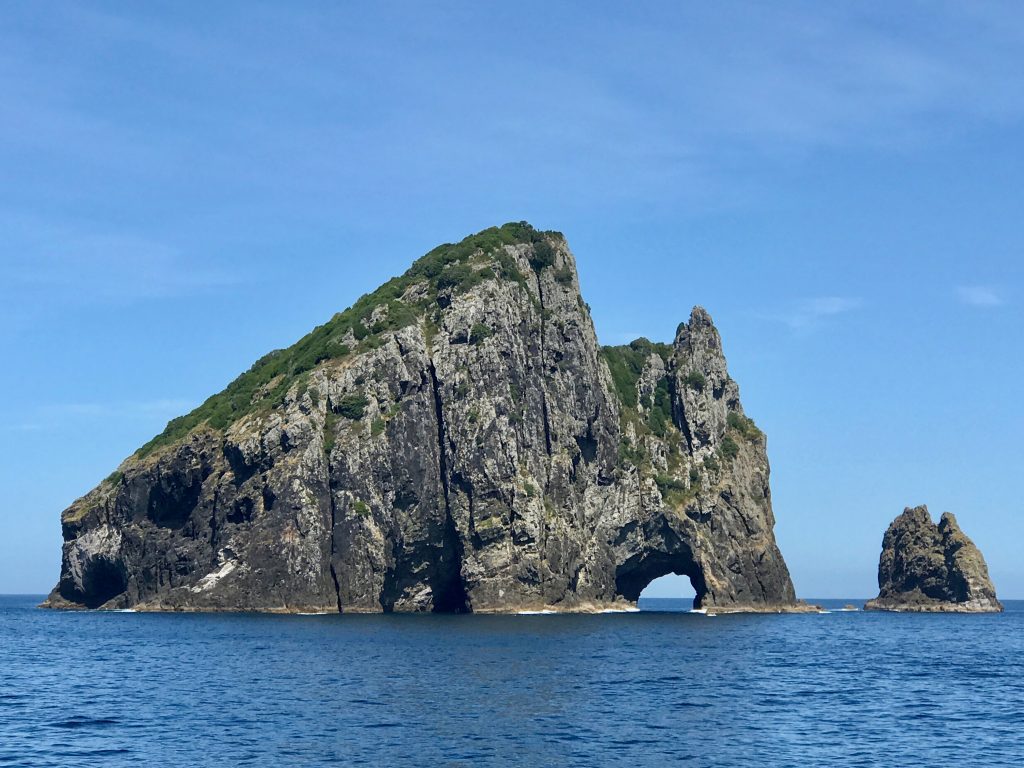 At the entrance to the Bay of Islands

It was yet another perfect day and, perhaps because we had no expectations, turned out to be one of the most fun days we had. We took a bus throughout the island, getting off at wineries and to see the views, and then getting back on. The people we met at the wineries were delightful (as opposed to the attitude we had (too often) found wine tasting in parts of California) and we loved the passion they had when they talked about their wines and their lives on the island.

We fell in love with this place too. Although we couldn’t live there for a variety of reasons, we could easily spend a few weeks there, just hanging out, and perhaps some day, when we are old(er) and gray(er) we’ll vacation there. It was one of those days that will remain etched in our memories. 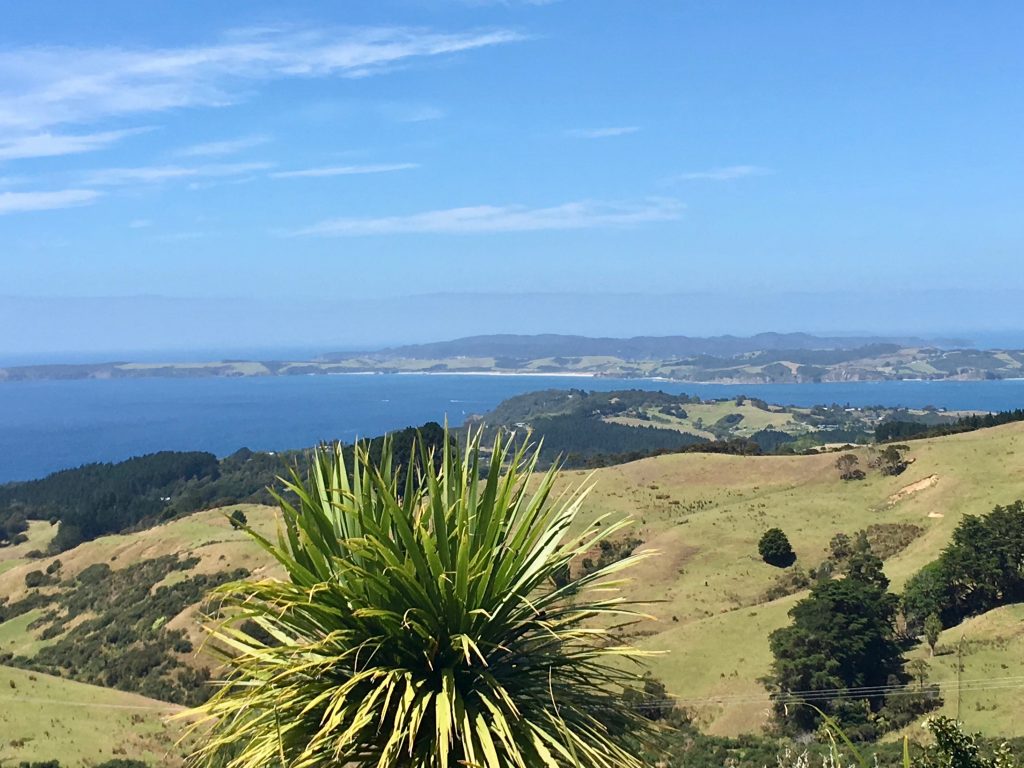 I could hang out here

The specter of the new administration was, and is, still there, of course, and very real as we fielded lots of questions from people about “what is going on in the US” as we traveled. But these discussions were not the focus of our interaction with people. Instead, that quickly moved to the background as we talked about their lives and adventures and the beauty of the places we all had seen, and the people we all had met as we traveled.