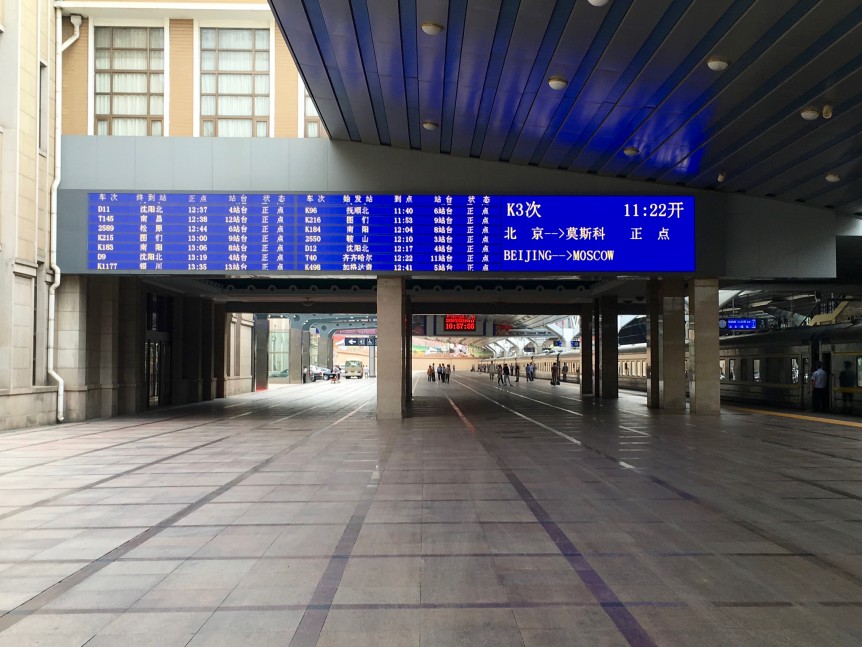 Here I am, at the Beijing Railway Station, ready to leave on the Trans-Siberian Railroad for a six week trip from Beijing through Mongolia, Siberia, and Russia, to Moscow. It is an epic journey, 7,621 kilometers (4,735 miles) through five time zones. 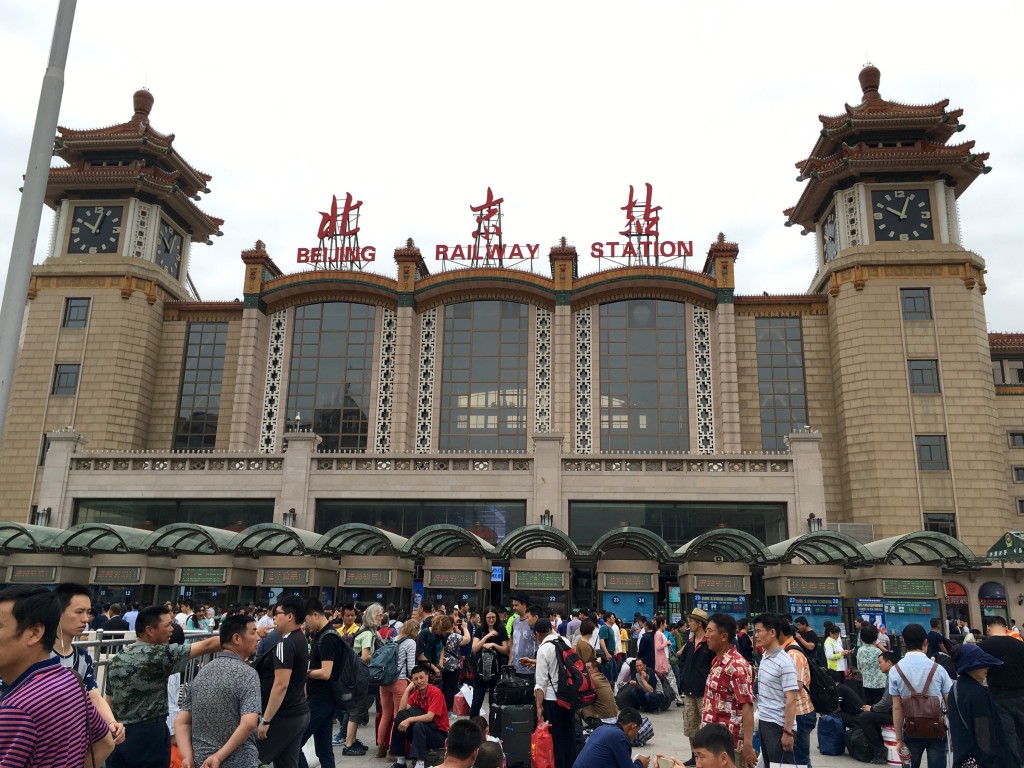 At the Beijing Railway Station

Even though I have wanted to make this trip since my early 20’s, and, like Homer’s Sirens calling out to Odysseus, my Sirens would periodically whisper to me don’t you think it’s time? I was never quite sure why I wanted to go. In fact, I’m not even sure most people understand what pulls them to make epic journeys. But for the journey to be satisfying, at some point, the reason needs to reveal itself.

This railway trip is an epic journey within another epic journey, our trip around the world, and, by the time I was ready to go, I had figured out what the call was. The trip on the Railroad was about connecting the East and the West — a trip from the heart of Asia to Europe — and the opportunity to see how the two cultures morph and dissolve into each other. Exploring how cultures in space are not discrete, not continual, but continuous.

Finally, here I am, ready to get on the train. And although I know the beginning (the East) and the end (the West) of the trip, it is the middle where the fascination lives.

I had just gone through the third round of passport and ticket checking to get on to the platform, and when I first see the train, it seems to go on forever. 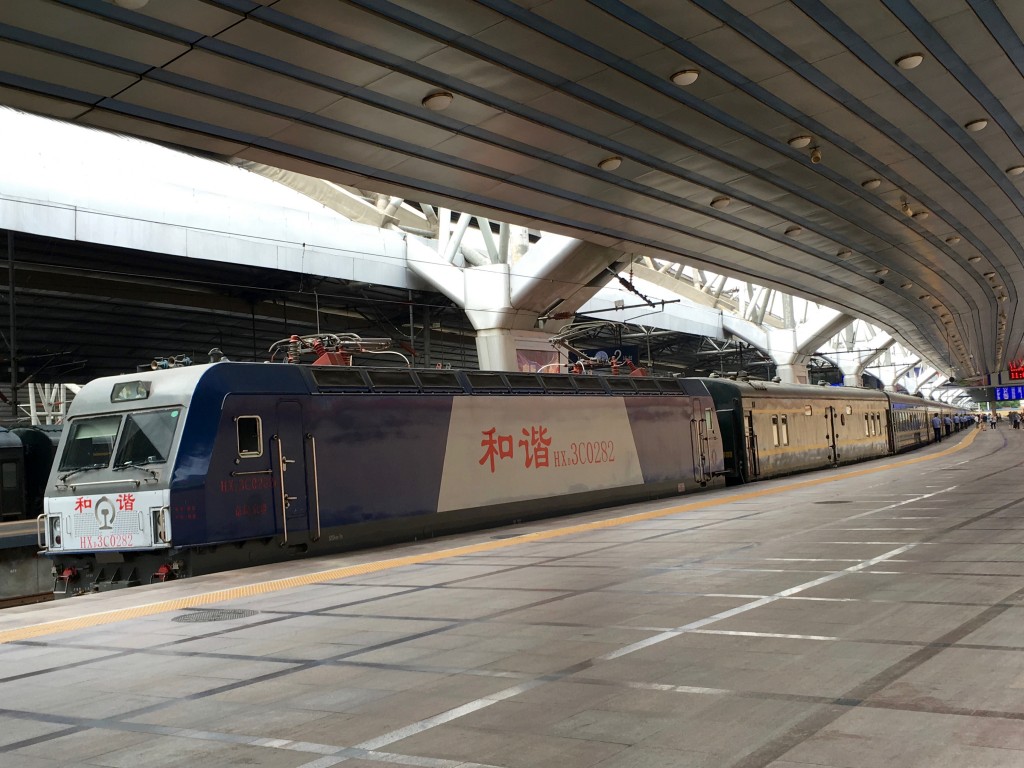 There is train almost as far as you can see

The journey follows an ancient tea-caravan route from China to Russia through Ulaanbaatar, Mongolia and further on to Europe. Here, with the symphonic poem In the Steppes of Central Asia by Alexander Borodin — the interaction of Russians and Asians as a caravan of Central Asians crosses the desert under the protection of Russian troops — playing in the background of my mind, I board the train and stow my gear.

The train is old, but in its own way charming. The walls of the cabins and corridors are wood, and the interiors have covers on the seats, a little like what your Russian grandmother would have. The only exception to the charm is the rather ordinary restaurant car. 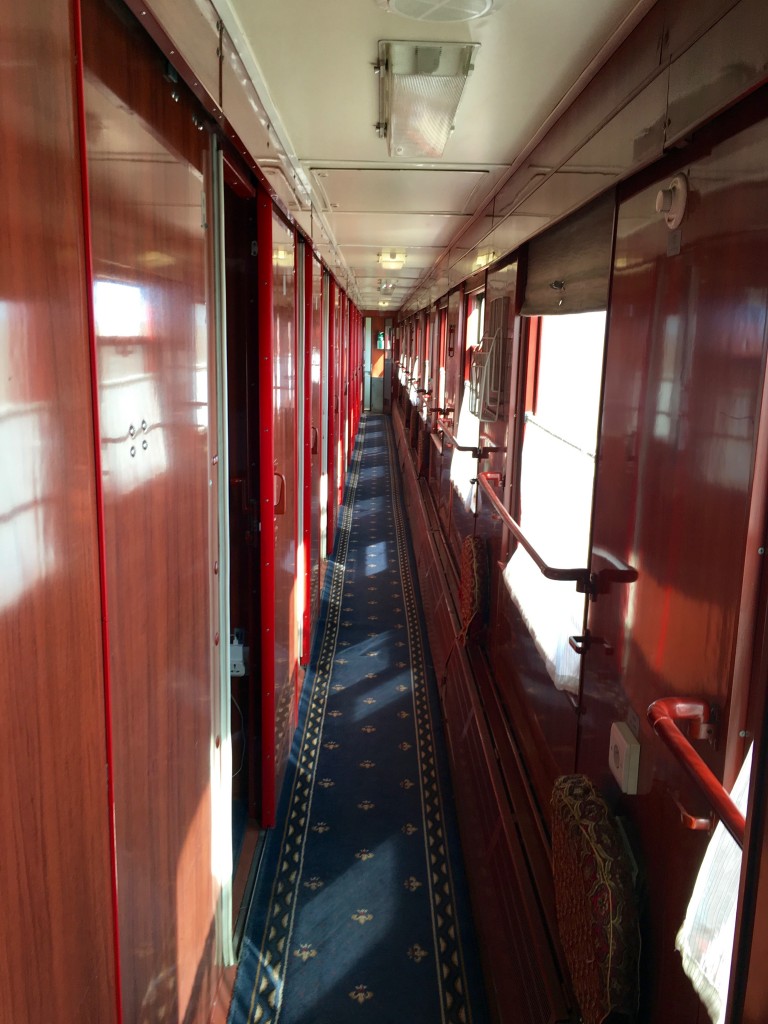 Wood and carpet on the Chinese train 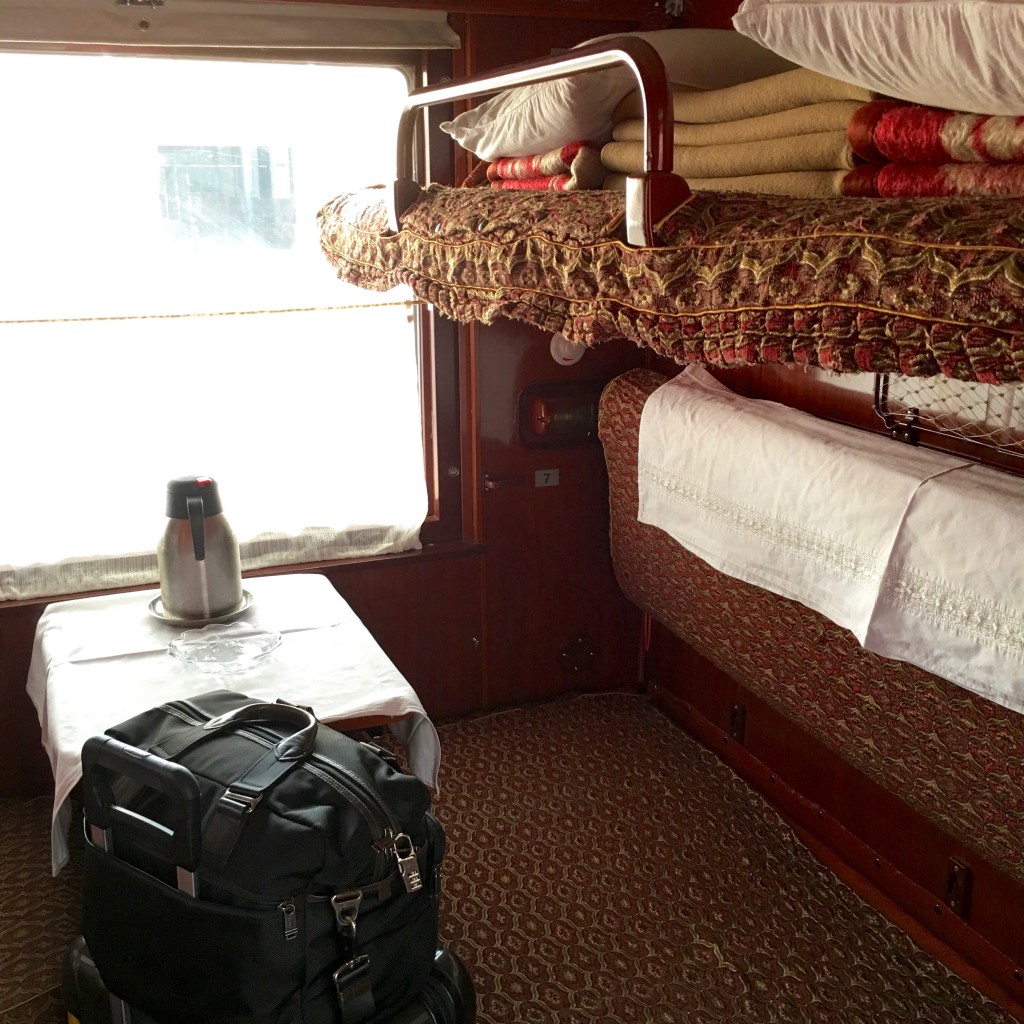 Seat covers in the gradmother style

Adding to the romance of travel on this train is what happens at the Chinese-Mongolian border. Traveling on the Trans-Siberian railway from Beijing to Ulaanbaatar is not like the rather pedestrian, and much easier, train traveling in Europe, where you can travel from country to country seamlessly, with no clear indication that you have moved from one country to another. At Erlian (China) some very serous Mongolian, and then even more serious Chinese officials check passports and visas. No mater how legal you think you are, there is always the fear that they’ll say, “Sorry, you are not welcome here.”

But what makes it more exciting is that the wheels of the Chinese train are changed to fit the Mongolian tracks. The Chinese, after all, use the standard 4 foot 8½ inch gauge track, while the Mongolians and Russians use a 5 foot gauge track.

When I first learned about this, I found it hard to believe. “You are going to change the wheels? What do you do, jack up the train like you would a car and put on new wheels?” Actually, they do jack up the train,and  more amazingly each carriage on this train-that-goes-on-forever is separated from the train, jacked up, its entire frame assembly that holds the wheel-axle assembly (bogie) unbolted, the old bogies rolled away, the new bogies rolled in, and the carriage lowered on to the new bogies that are bolted back on to the rest of the frame. 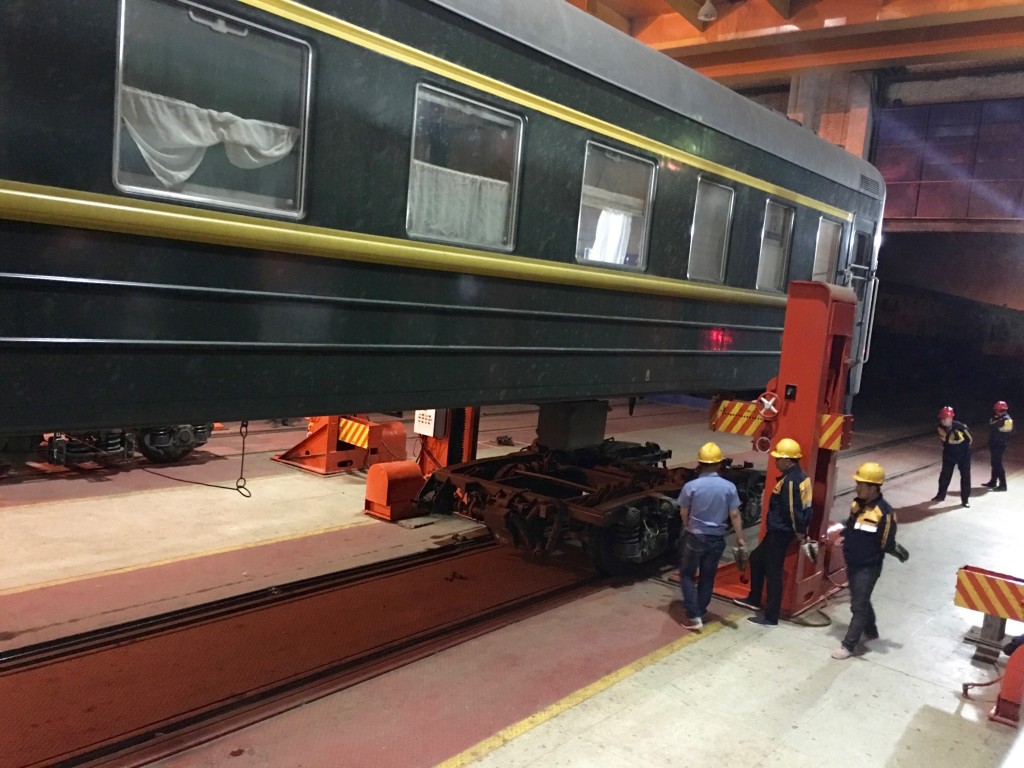 Even though I watched it happen, it was still hard to believe 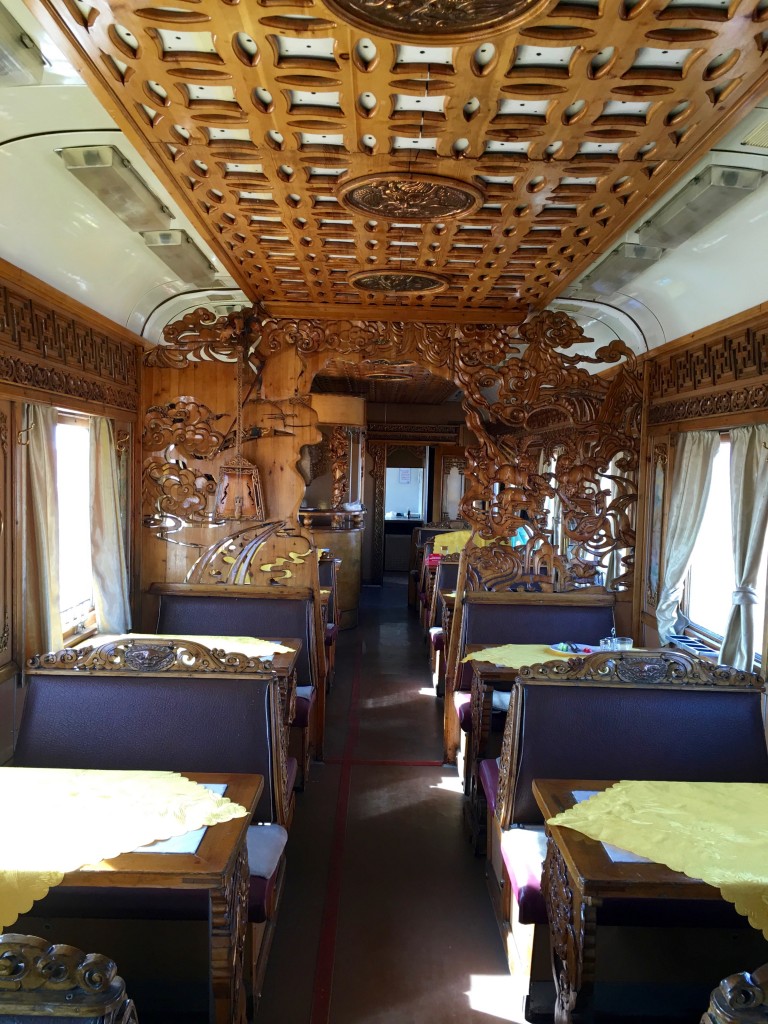 The much nicer Mongolian restaurant car

While you can leave the train while this is being done (but why would you want to since there is nothing to do in the train station), most of us stayed and watched the drama unfold. Four hours later we were off, with most of us asleep by then.

When I awoke the next morning, I was traveling through Mongolia. I felt like a little kid at Disneyland, except this wasn’t a theme park, it was real. We were traveling through the South Gobi Desert, and as I was eating breakfast in the restaurant car, I could see camels lounging near the tracks and my first gers (you probably know it by its Turkic name yurt) — the portable, round dwelling used by the nomadic families on the steppes of Central Asia. 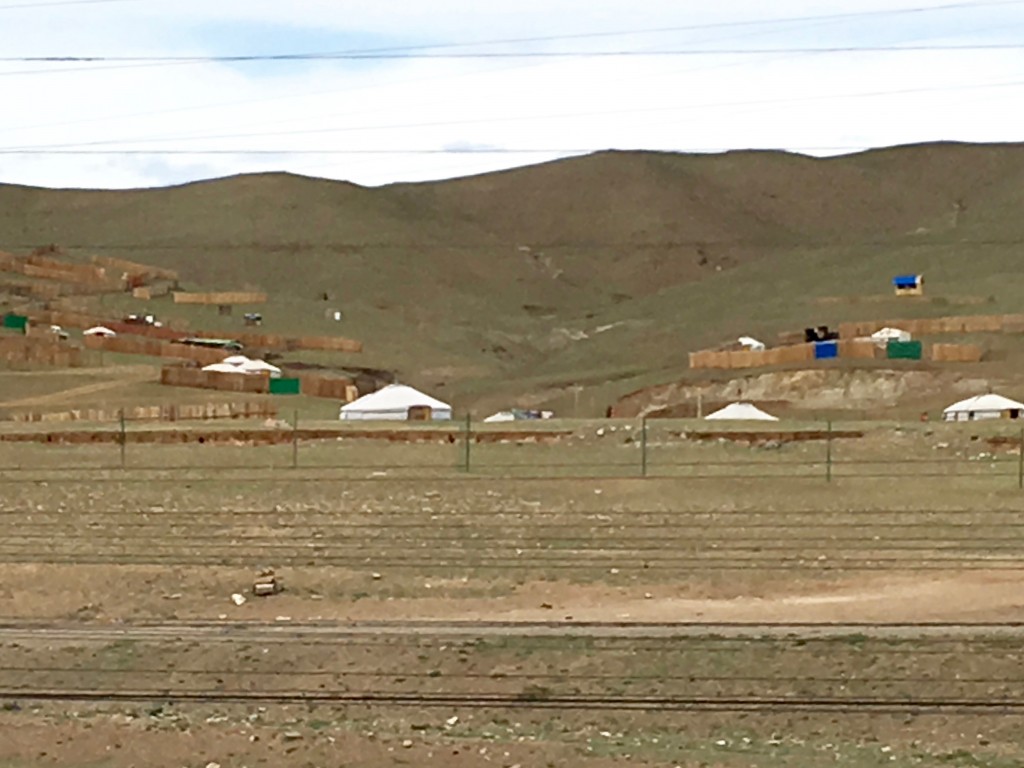 But while the jungles of Southeast Asia have dissolved into the steppes of Central Asia and the Gobi Desert, as I will discover, a connection between the peoples remains.

There is something comforting about the sound of the wheels clicking on the tracks and the slight movement of the train. The tracks are not straight, gracefully curving as they snake across the flat desert. And as we traveled, people moved out of their cabins and began to tell their stories to each other. “How far are you going? How long will you be on the train?” A community of sorts built.

A couple of hours outside of Ulaanbaatar, Mongolia, the desert turns into the grasslands of the steppes of Central Asia, and the flatness of the Eastern Gobi into rolling hills. There are herds of horses, cattle, sheep, and goats. As we get closer to central Mongolia, mountains appear in the background and trees appear on the hills. 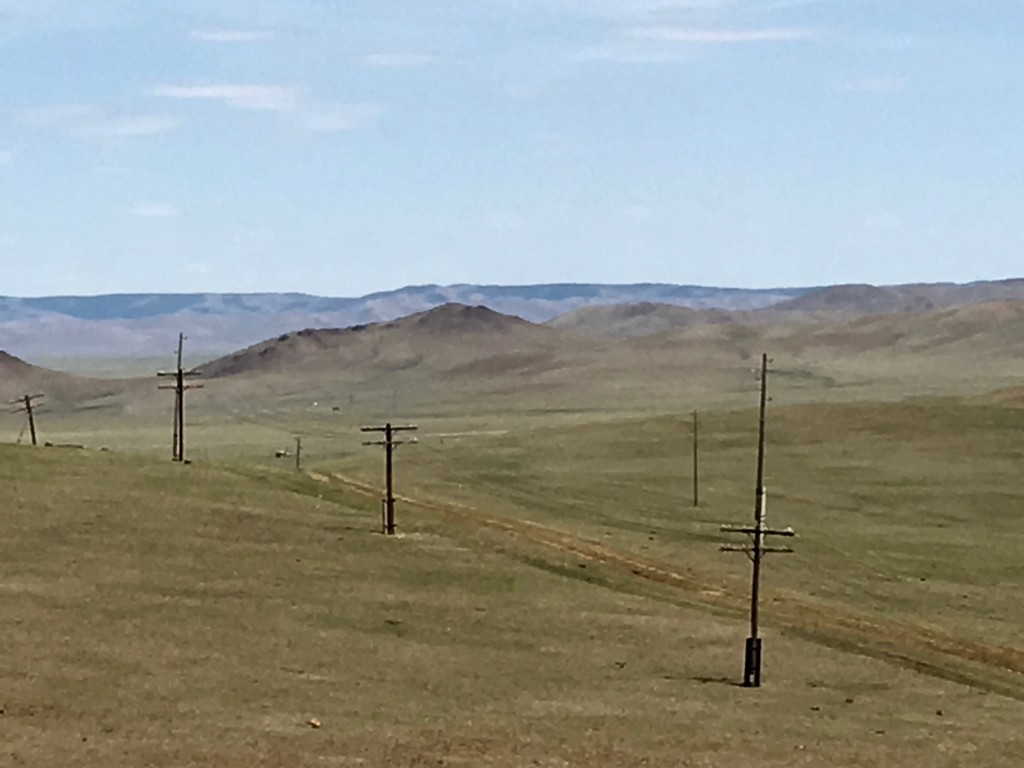 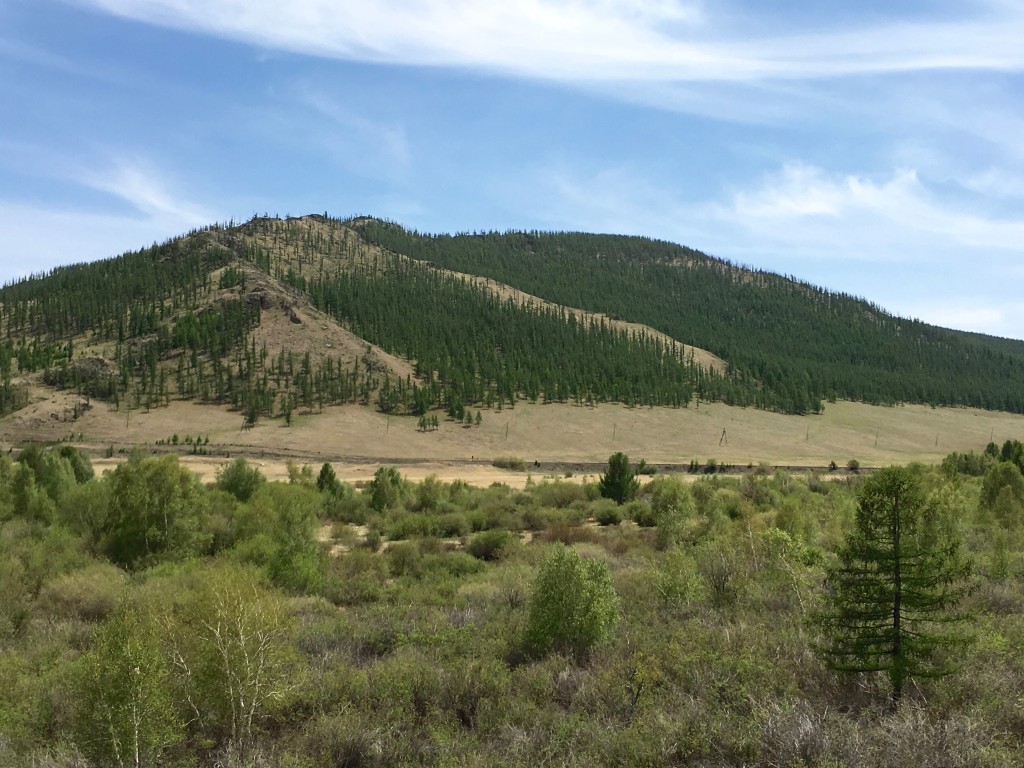 It’s a geographical wonderland — in the space of a few hours I’ve been in the desert, the steppes, and the mountains.

But when the train pulled in to Ulaanbaatar, the first stop on our journey, Linda wasn’t with me, and this was the first time in ten months that we were apart for more than an hour or two.

Our trip so far has been an extraordinary experience, and we have never had second thoughts about our decision to spend the next several years traveling … except for one. We really miss our family and friends. When we first started planning our trip, we knew this would happen, but it was, at that point, only an abstract idea. We weren’t quite sure how we would feel and how it would all work out the longer we were away. This was especially true for Linda’s 92 year old mother.

Our plan was to encourage our friends and children to visit us as we travel, and for us to return to the US every year for a month, While we have met up with some friends as we have traveled, because of some timing issues, for this first trip, it will be 15 months before we are back.

Of course, the longer we are gone, the more we miss everyone.

From the start, Linda was never really that excited about the Mongolia part of the trip — this was my thing. A couple of weeks before we were to leave for Mongolia, it seemed like a good idea if she skipped this part of the trip and fly to Phoenix to see her almost 93 year old mother (and fly our daughter in from Los Angeles), stopping in Princeton on the way to see our son Evan (and watch him graduate from graduate school).

So I explored Mongolia on my own, and as it turned out, her trip back to the US was a great decision. Exploring Mongolia and the Gobi turned out to be much more physically challenging than we had thought, and she has had no qualms about missing it. I am writing this in the middle of the Gobi before the electricity is turned off (more on that in my next post), grateful to be here. But I do envy her, and I’m toughing it out until I see everyone in November. Linda and I will meet up again in several days in Ulaanbaatar, and we’ll start our trip across Siberia and Russia together.