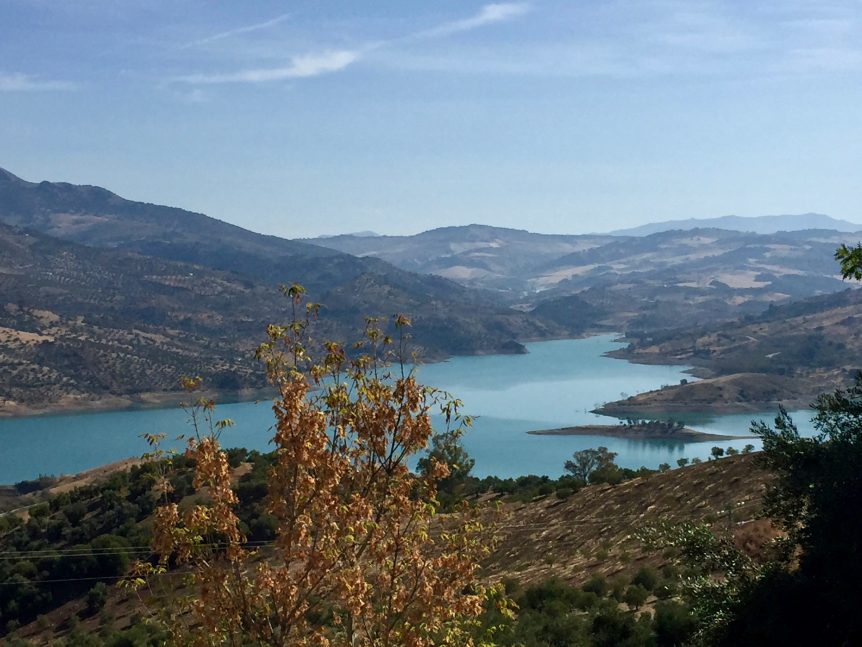 I was not quite sure what, but something was drawing me to the north of Spain, even though it was not one of the “top” tourist destinations. One thing I knew I had to see was the Guggenheim Museum in Bilbao, even though I had read that the building by Frank Gehry was far better than its collection. But despite the fact people told us that besides the museum, there was not much to Bilbao — it was just another industrial city — in the spirit of Robert Frost’s “The Road Not Taken”

I shall be telling this with a sigh
Somewhere ages and ages hence:
Two roads diverged in a wood, and I—
I took the one less traveled by,
And that has made all the difference.

… we decided to start our exploration of Spain by spending eight days in Bilbao, and use it as a base to explore the Basque country. 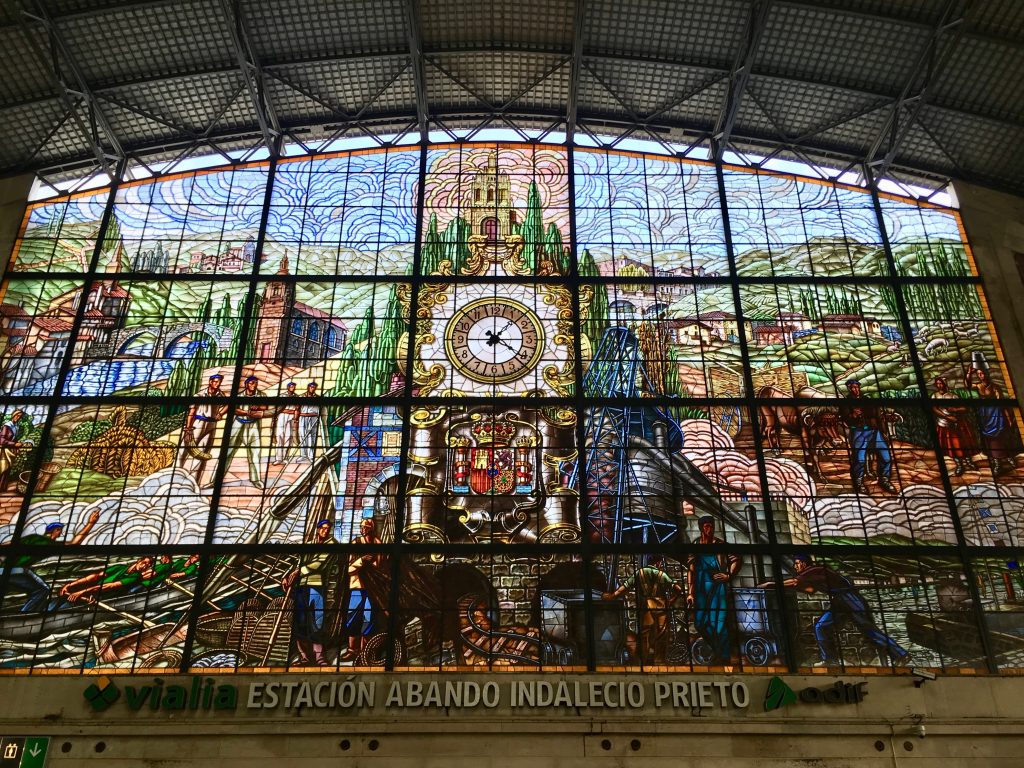 The train station in Bilbao was a promising start

Of course, I did have a few qualms, and when we first got there, those qualms started to clammer to get my attention. Our friends in Portugal had warned us that not many people spoke English in Spain, and sure enough, when we arrived, it seemed as if no one in Bilbao spoke English — the taxi driver who took us to our Airbnb, the owner of the apartment we were staying in (who lived in Barcelona and who we had only communicated with by email and Google Translate), and her cousin who let us into the apartment and tried to explain how things worked. It was a disconcerting way to start.

But the people we met in Bilbao were kind and willing to go out of their way to help us.  The language issue, instead of being a problem, became an opportunity to experience what the Basque people were really like (trust me, this is not one of those sickly-sweet “If life hands you lemons, make lemonade”  inspirational posts). One of my fondest memories is working with a clerk in a supermarket, who spoke no English, to figure out if a coffee cartridge would fit our coffee maker, and when gestures and charades didn’t quite work, she left me for a moment and found a customer she knew who spoke English to help us.

The morning after we got to Bilbao, since the Guggenheim was the only place on our list, we were marching down to it when we were (easily) distracted by the Hyperrealistic Sculpture exhibit at the Bilbao Fine Arts Museum. Since it was the last day of the exhibit, we decided that after all those years of wanting to see the Guggenheim, another few hours wouldn’t make a difference, and we went inside. It turned out to be one of the most interesting exhibits we had seen in some time, and after two hours, left feeling pretty good about having found at least one more thing to do in Bilbao, and that our decision to “wing it” in Bilbao might turn out to have been not so bad. 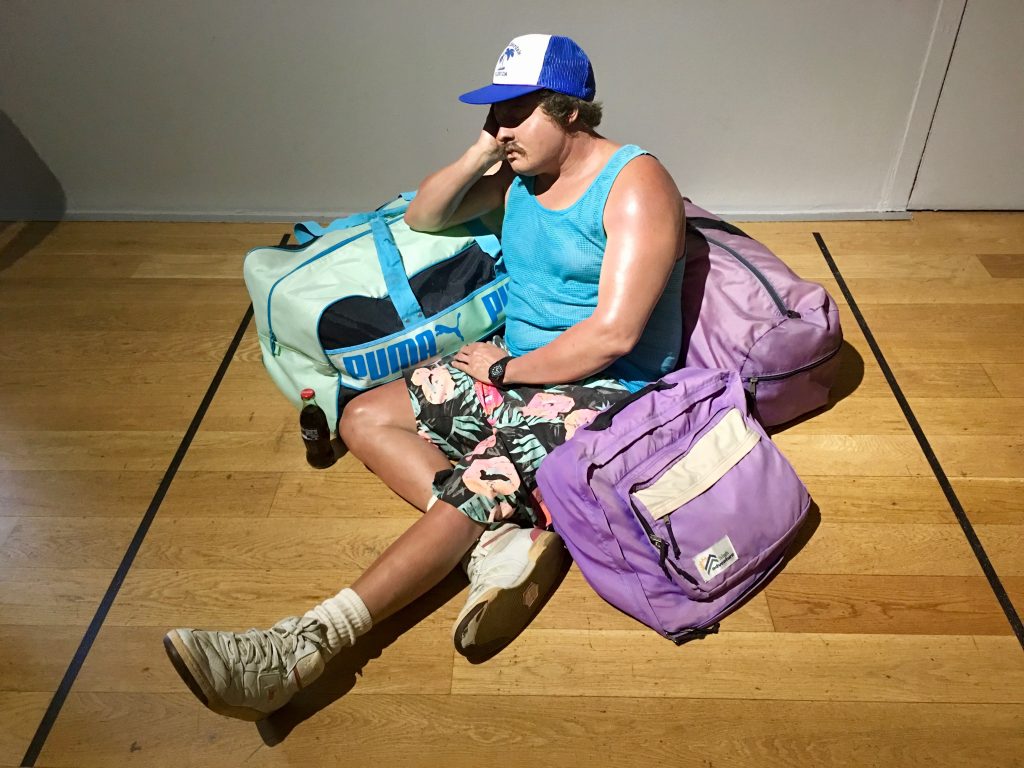 The archetypal tourist in the Hyperrealistic Sculpture exhibit

On we marched to the Guggenheim, and from our first glimpse, and during our first, and then second visit, there was no doubt it was well worth the trip. Frank Gehry’s building was a work of art both inside and out. 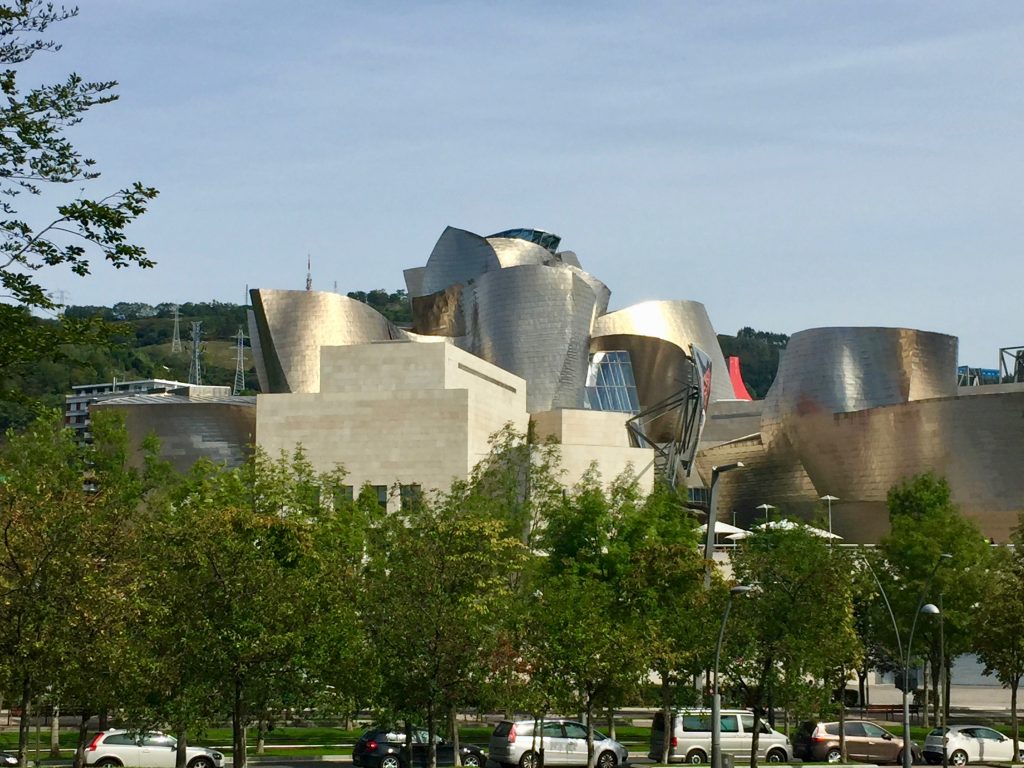 And yet again, a photograph can’t capture the experience 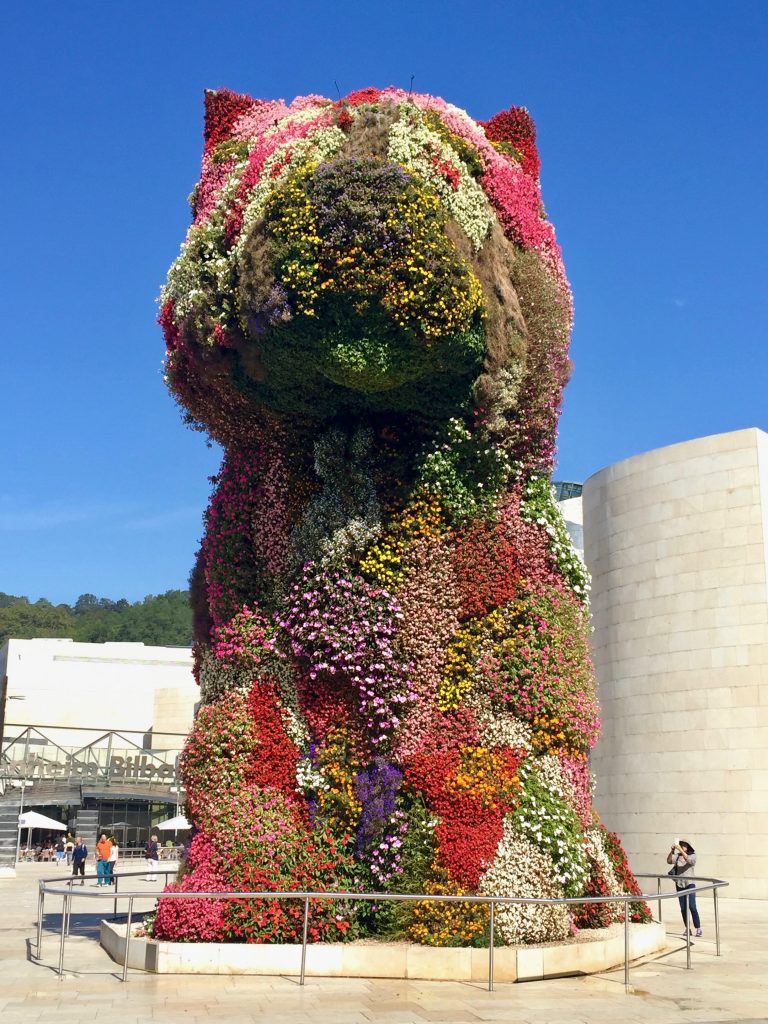 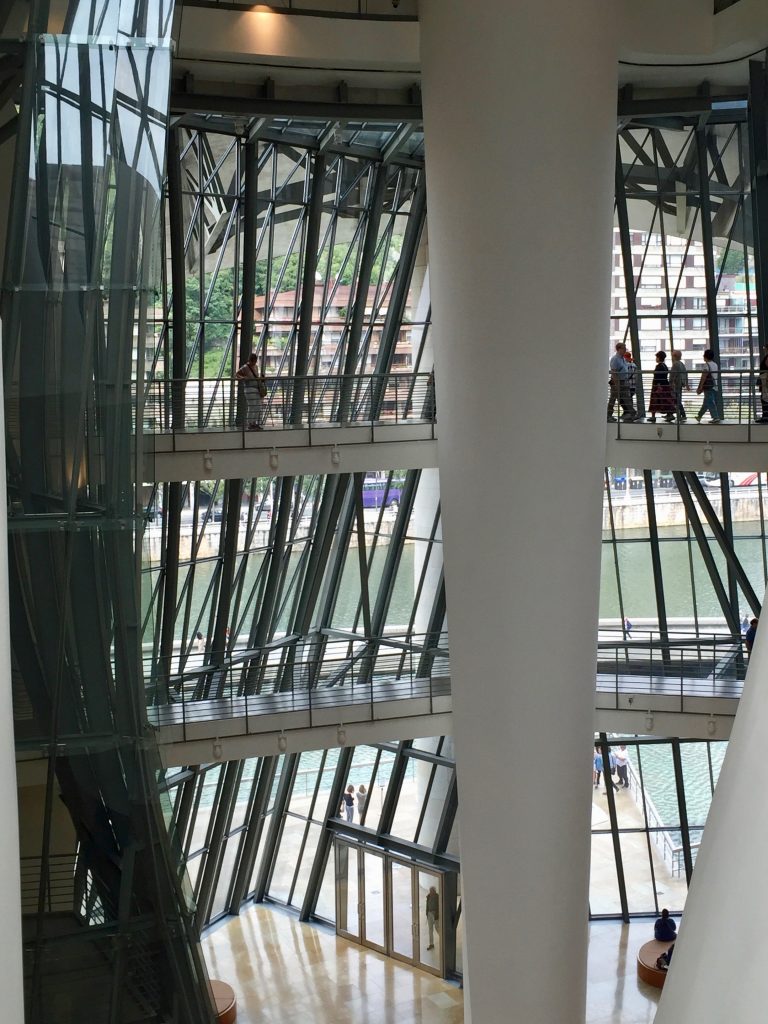 Soaring spaces welcomed us inside

But instead of the gray industrial landscape we had been expecting, we found a city of beautiful parks and a riverfront walk with public art and people hanging out in cafes enjoying the weather and the atmosphere. Conceptually it was like the scene in the Wizard of Oz when Dorothy opens the door of the sepia-toned Gale farmhouse to the lush colors of Oz. 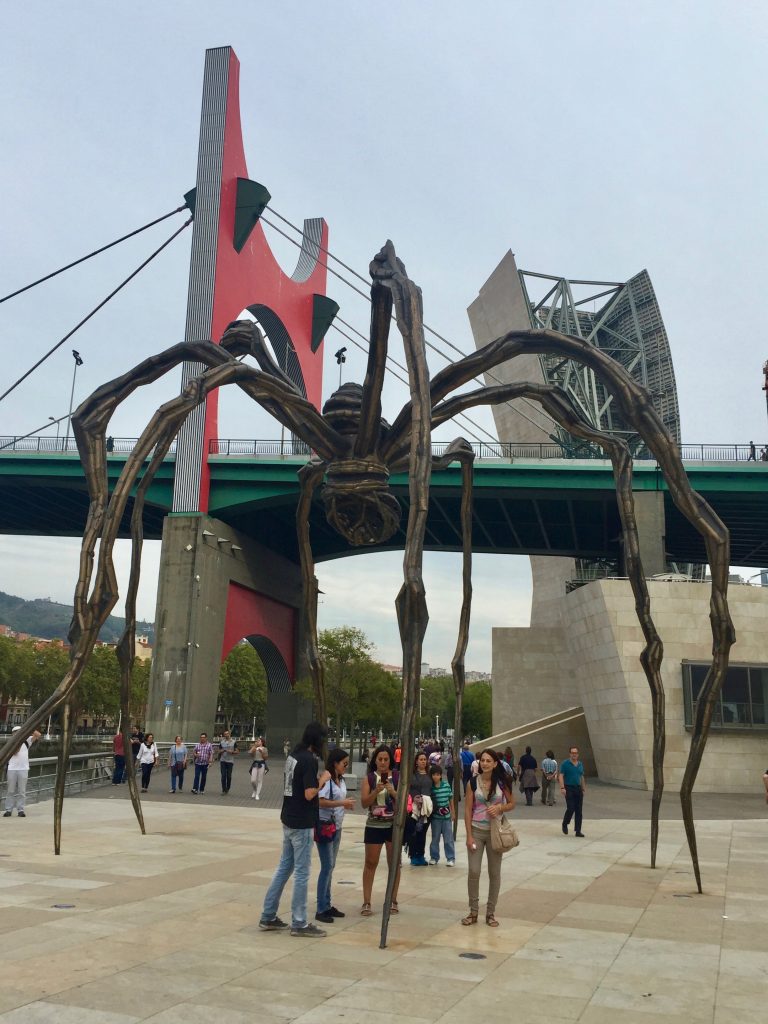 “Random” art along the river

The critics, it turned out, were right and wrong about the Guggenheim collection. I thought most of the collection was ok, not great, but ok. (On the other hand, there was a very large temporary and well curated Frances Bacon exhibit as well.)

But in the largest gallery, 30 meters wide and 130 meters long, was a permanent installation that approached “as good as it gets” —  “The Matter of Time” by Richard Serra — a work that opened my eyes to possibilities of how sculpture can change the way we experience a place. (It also struck me, that intentionally or not, his massive steel sculptures connected the Bilbao of the present with its industrial past.)

In the interviews with Serra that were part of the exhibit, he made it clear that his pieces are not just in a particular architectural, urban, or landscape setting, but are of the setting, and are about creating a dialogue with it as well as changing the spectator’s experience of it. For Serra, the spectator’s experience of an object is crucial to its meaning, and his work has both a physical and visual relationship to a viewer. As we moved around, and especially through each sculpture, it contracted and expanded — creating spaces in which we experienced not just the mass of the work, but even a kind of serenity — changing not only our perception of the sculpture but our experience of being in the environment. Taken as a whole though, the exhibit went beyond a single experience with a single sculpture.  The works are laid out in the gallery to create both passages of space that are narrow and wide, compressed and lengthened, limited and soaring, and passages of time, as we walked through the gallery and as we thought about pieces of the experience while we were there and afterwards. 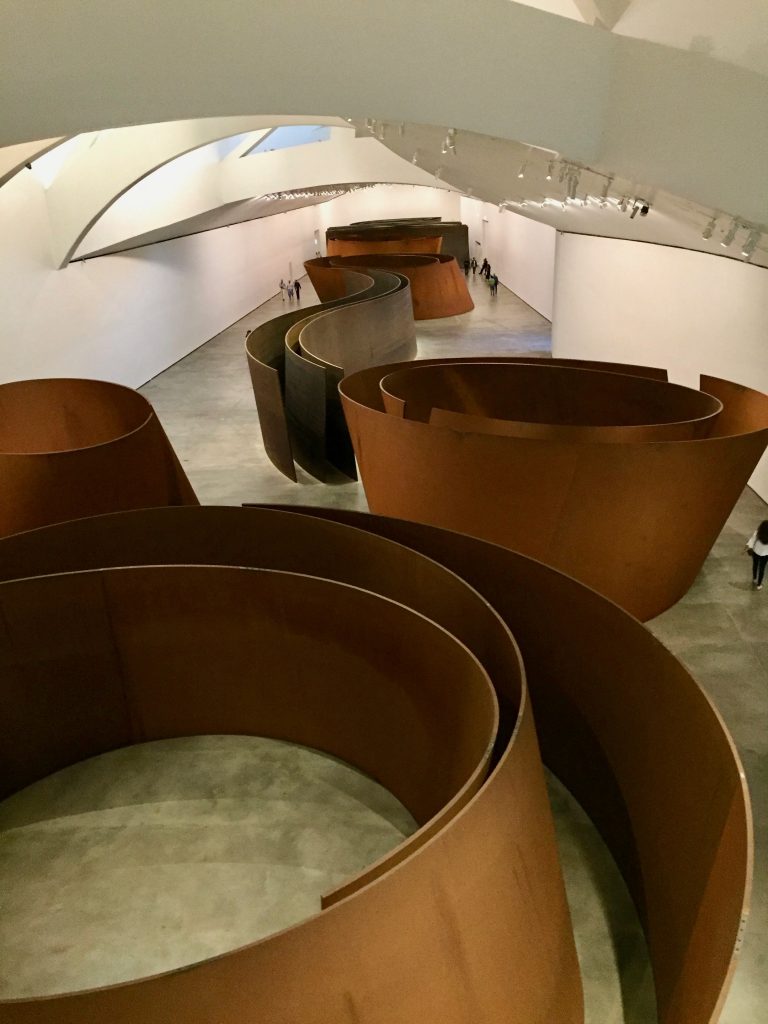 One of the more fascinating exhibits we have been to

I had seen Serra’s sculptures in other places, and after I spent time experiencing and learning about this installation, I moved from more or less indifference to his work to fascination with his ideas.

We did make several day trips from Bilbao. We figured out the public transportation system and took the train north to Santurtzi and Portugalete to see the suspended gondola across the Biscay Bridge, the world’s oldest transporter bridge, to Getxo. Built in 1893 it was, and still is, used to transport passengers and cargo while allowing ships to go through without disrupting the harbor traffic or having to build a massive bridge with all the accompanying access ramps. It was yet another example of the aesthetic possibilities in what people often offhandedly dismiss as simply industrial — it was a perfect combination of beauty and functionality. 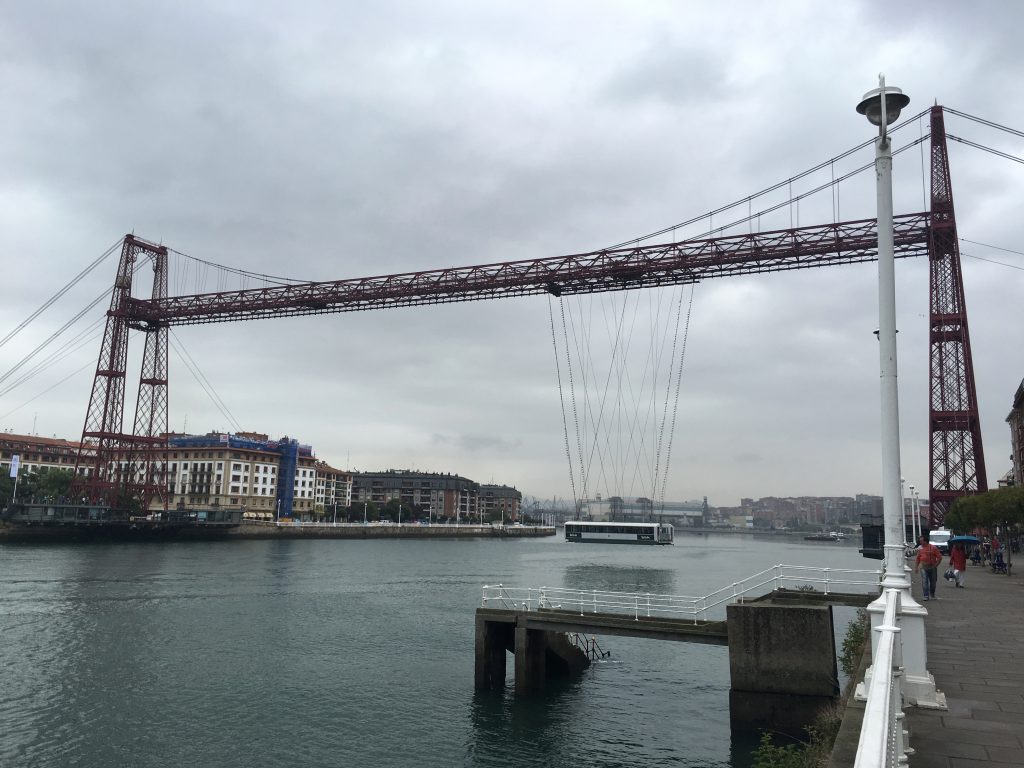 The aesthetics of the industrial

There was also that day long adventure to the North coast and Guernica that I wrote about in the previous post.

Since there was work I had to get done (it was getting to be time to actually file our tax returns), we took advantage of a couple of days of rain and finally got it all done in Bilbao. As we simply lived and worked in Bilbao, we felt ourselves folding into the daily flow of the city. We had our local market where we bought our ham, cheese, and olives, and our bakery down the street where we bought our daily bread.

While hardly a road less traveled, we did the same kind of thing in Seville — spending nine days there seeing the sights, taking day trips, and living in a neighborhood.

For part of the time, we did the ordinary sightseeing which that part of Spain is known for. 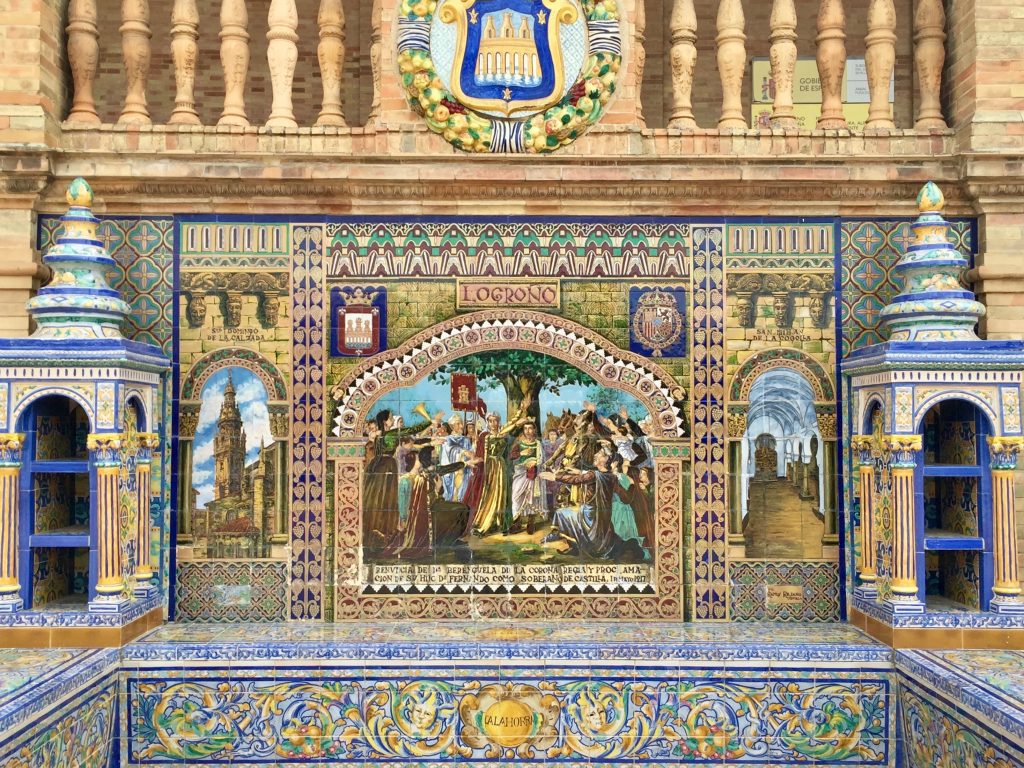 We were particularly fond of this in the Plaza de España, Seville

There were the beautiful examples of Moorish and Mudéjar (an architectural style that emerged in the 12th century that was a result of Muslim and Christian cultures living side by side) style buildings. I especially liked the Real (Royal) Alcázar de Sevilla and found it more interesting (albeit not more spectacular) than the Alhambra we had seen earlier in Granada. 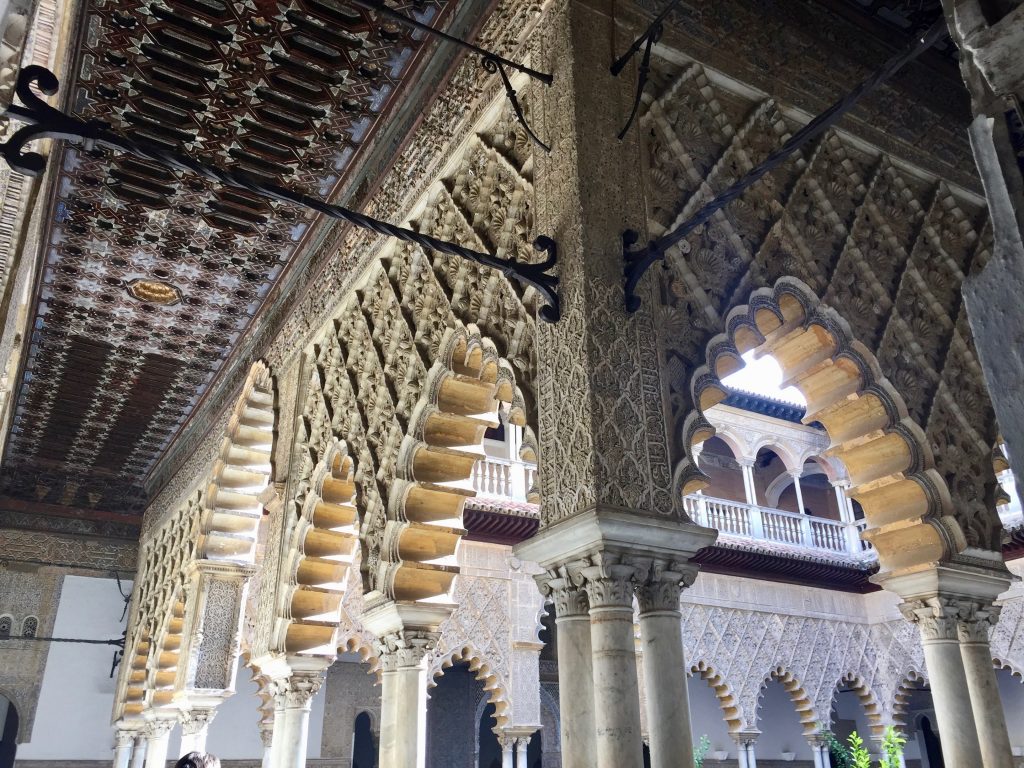 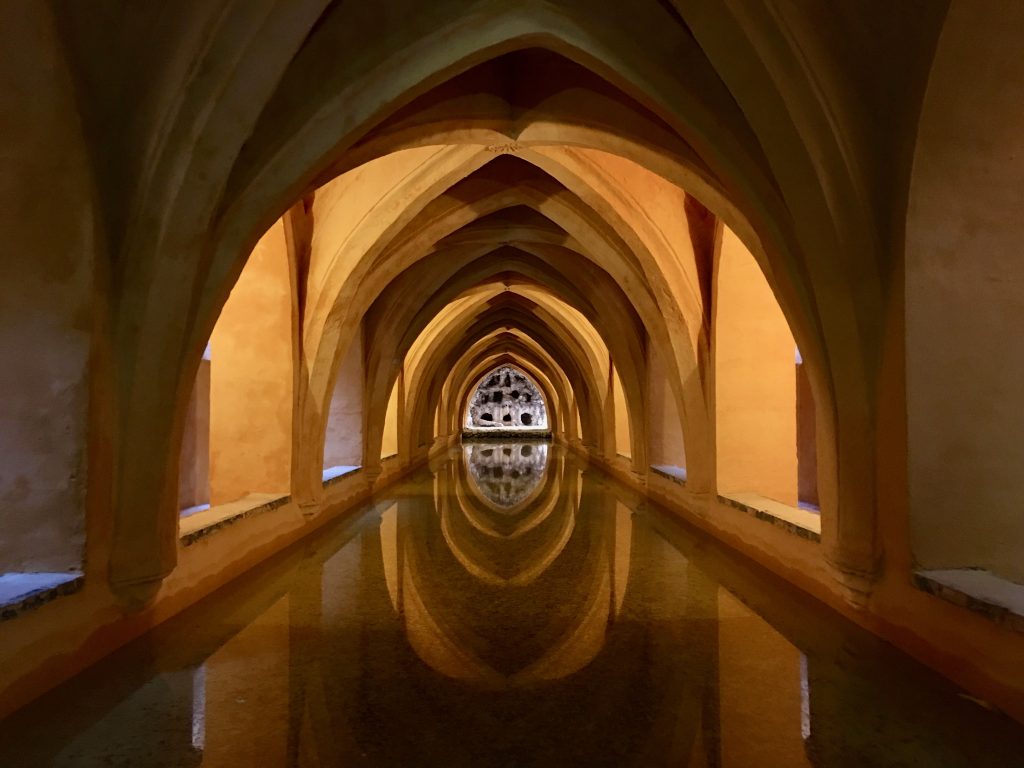 Very cool in there

We took a day trip to see Córdoba’s great Mezquita Cathedral de Cordoba. If you ignore the throngs of people, and the 16th-century cathedral (still in use) constructed right in the middle of the mosque, you can imagine yourself in an age that in one way was more civilized than today— one where Muslims, Jews, and Christians lived side by side in a city enriched by the interactions of the diverse, vibrant cultures. 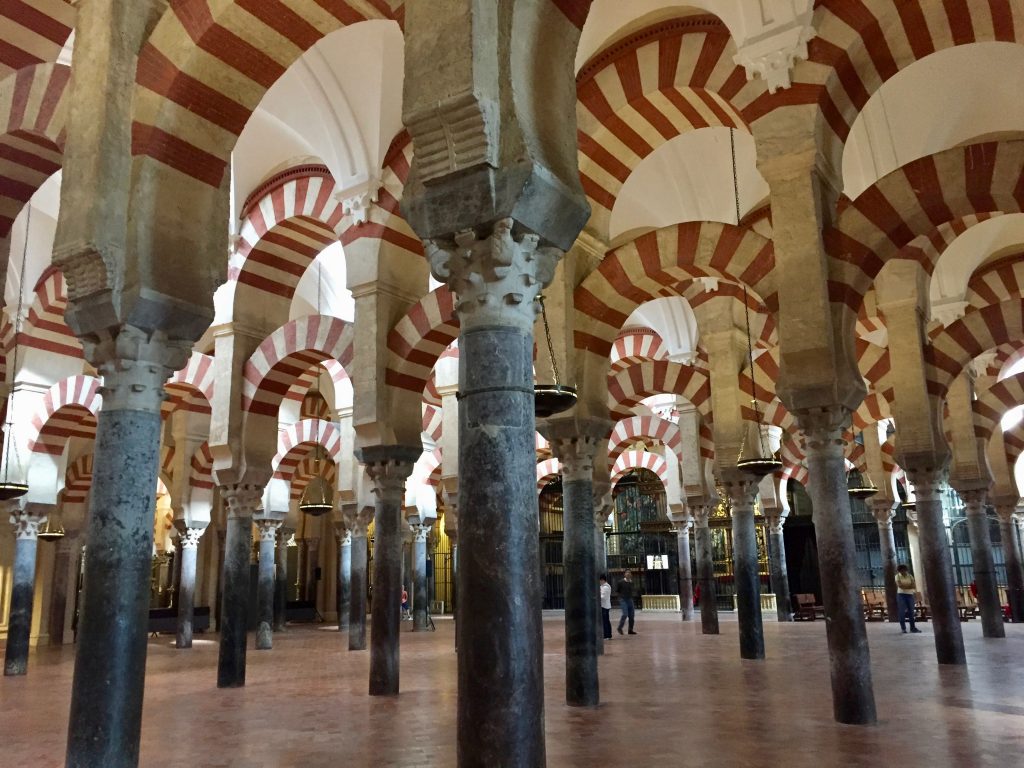 Imagine it filled with tens of thousands of worshipers 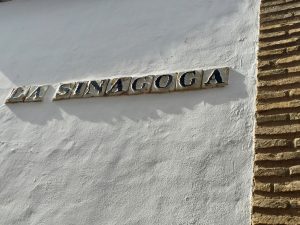 A very small and old Synagogue in Córdoba was a poignantly ironic reminder that the Jews, Muslims, and Christians lived in peace under Moorish rule until the Christians retook the Iberian Peninsula, banishing the Jews and forcing the Moors to convert to Christianity. 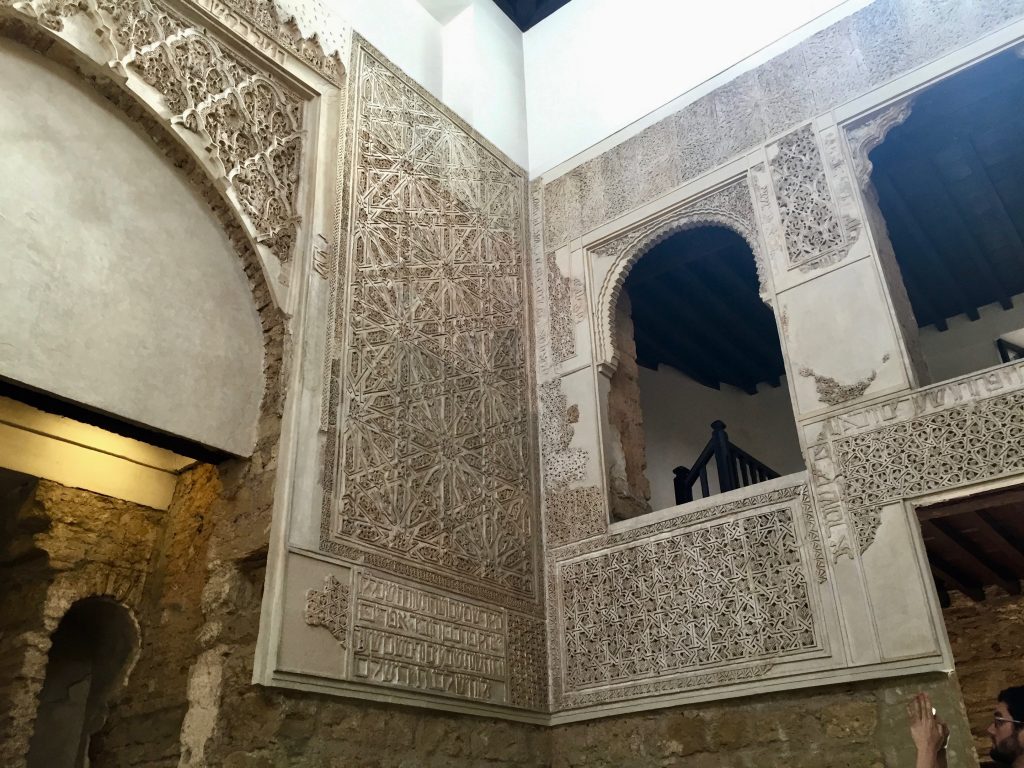 And then, of course, there was the requisite trip to Ronda and its picturesque Puente Nuevo bridge. 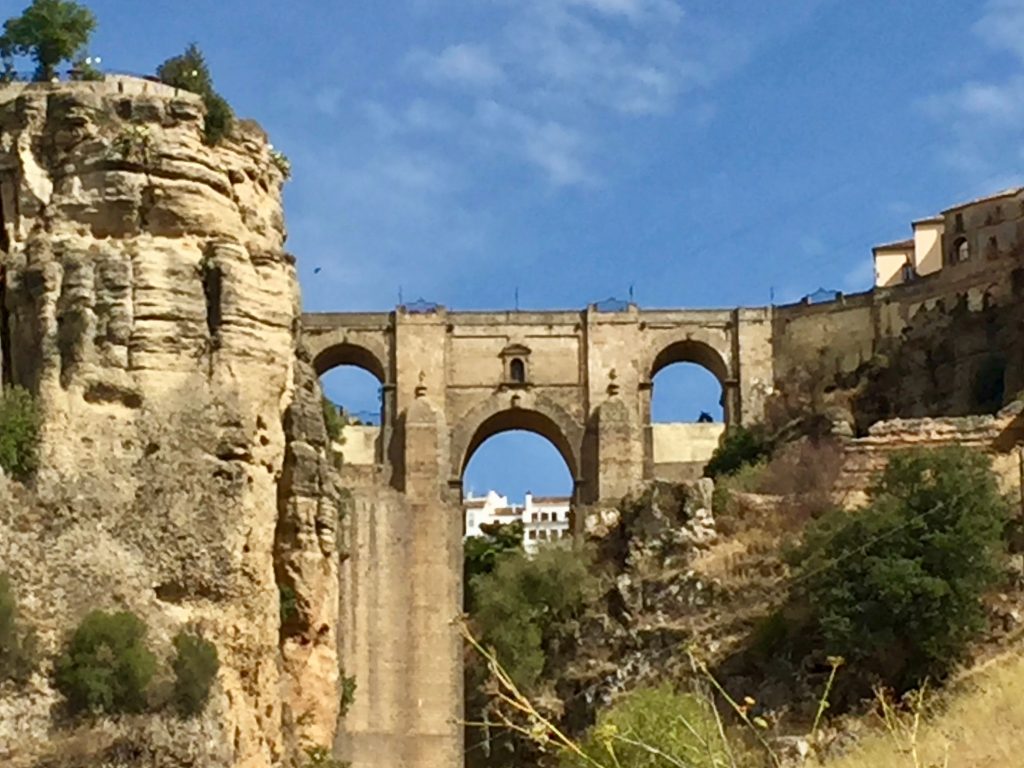 But the real highlight of our stay in Seville was simply spending time there. As we traveled, we have found sights becoming less and less important compared to the experience of just being in a place. After staying someplace for a while, it starts to feel as if we were in a new home, with no fancy dinners every night — just local markets and restaurants, and getting to know the restaurant owners and staff.

In Seville we chose to stay in an Airbnb not in the main tourist part of the city (but within walking distance), but across the river in Triana, a more residential area — a neighborhood on the west bank of the Guadalquivir River. 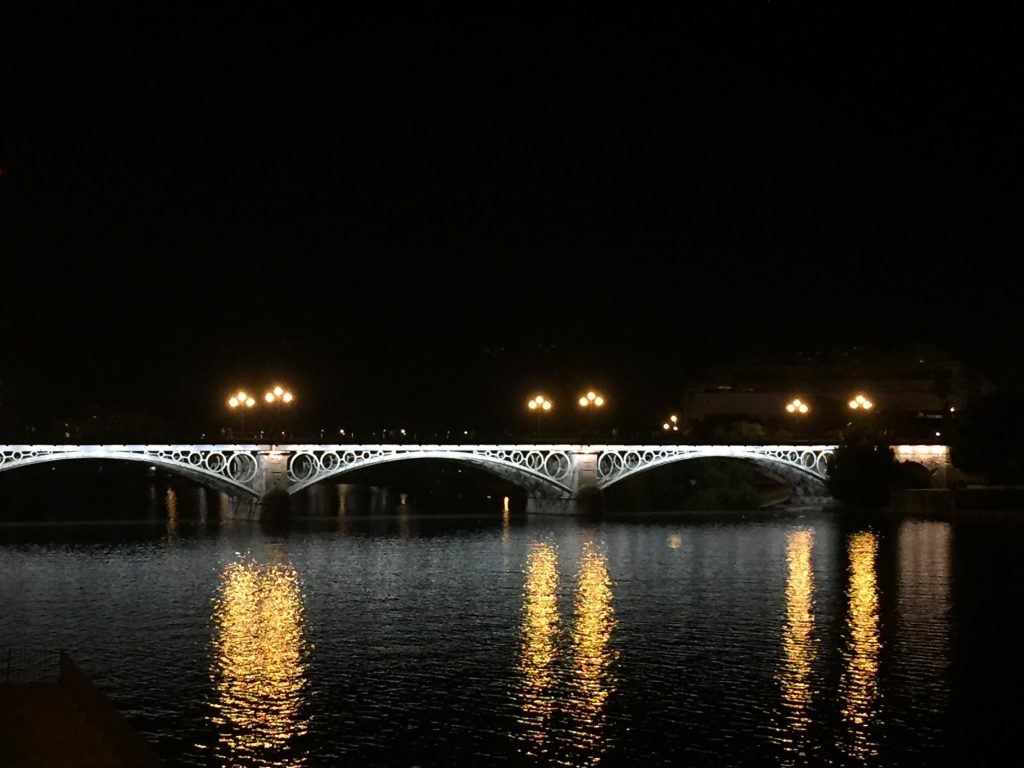 The bridge to Triana

We found yet another local market and bakery and realized once again how good it makes you feel when you walk into a store and the shop owner recognizes you, and after you go back to the same restaurant a few times, the manager sends drinks or digestives to you us as “temporary regulars.”

In Seville, one of our more poignant experiences was finding a tiny store that sold twelve different kinds of olives in open barrels, and when we couldn’t decide, the sweet owner offered samples for us to try. We spent late afternoons drinking red wine and eating olives, and ended up visiting and talking with the olive lady every day. After the first few times she would smile when she saw us, and the last time we went there, after we told her we were leaving the next day, there was a trace of sadness in her face as she wished us Vaya con Dios (go with God).