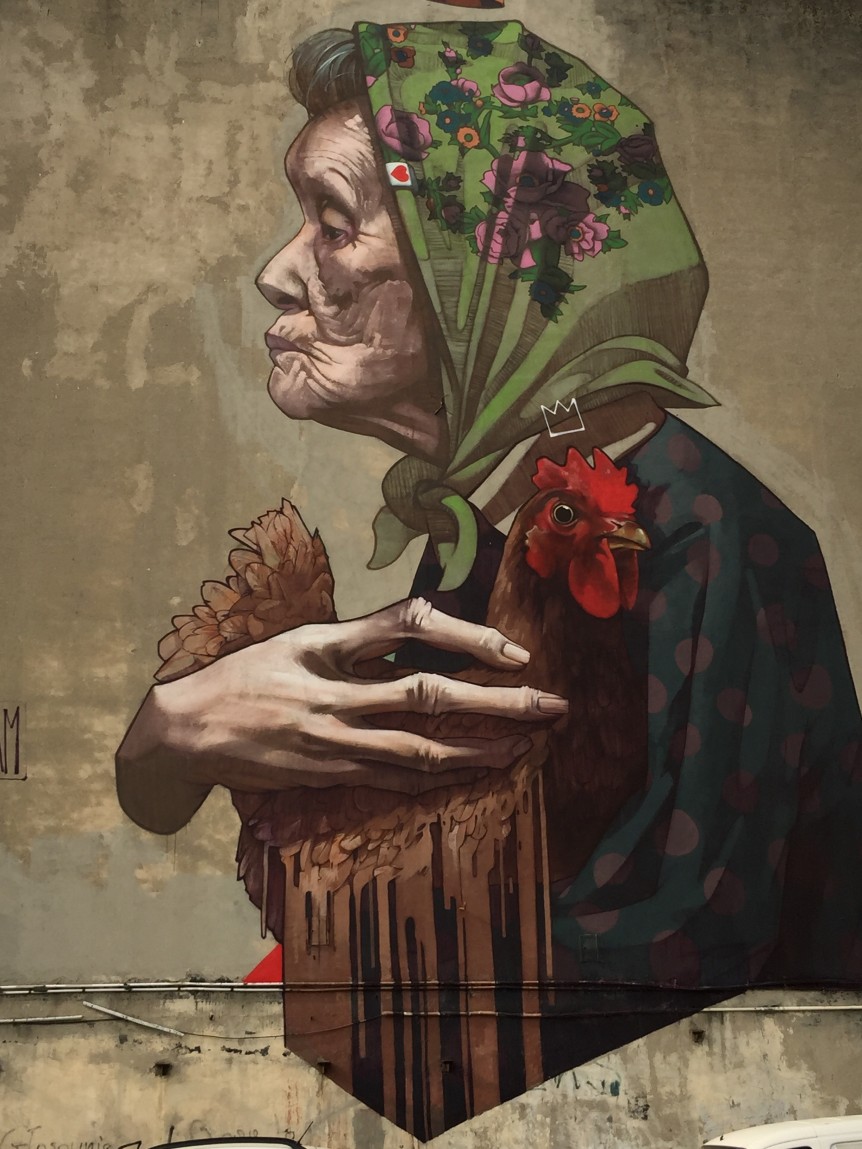 One of the things we want to explore on our trip is street art. While we have been involved with art for many years, we only recently became interested in street art. So while we know something about it, our ideas about street art are still in the process of crystallizing, just as the movement itself is. 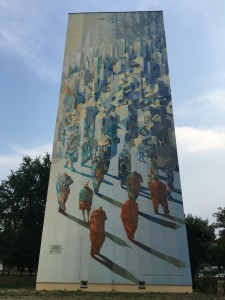 What we found in Łódź was 37 large murals (one of them as high as 11 floors) around the city, created by street artists from around the world. The project was driven by Urban Forms Foundation, created in 2009, whose fundamental mission is to create large format paintings on the sides of buildings to improve the current image of Łódź (when we told people in Warsaw we were going to Łódź, some of them referred to it as the “Detroit” of Poland) by enhancing public spaces. This is part of an effort to revitalize a dying industrial city and transform it into a place attractive to “creative” industries (whatever those may be).

Seeing the art in Łódź we realized we needed to adapt a real point of view on what we thought street art was. The chairman of the board of Urban Forms Foundation and the curator of the project both raised the issue during our conversations. The former questioning whether the mural project was street art since it was legal and supported by the city, and the latter having an unequivocal view that even though the murals were painted by street artists, they were not street art.

After a lot of thought, a lot of research, and looking at a lot of street art we’ve came up with our own perspective on the question.

Street art has it roots in graffiti, a centuries old tradition, which ranges from tags to written words to elaborate wall paintings, and dates back to ancient Egypt and Greece.

But while street art has its roots in graffiti, it differs from graffiti in the artist’s intent and the intended audience. Graffiti is about the individual (the artist), and can be an advertisement, a way to mark territory, or simply an act of vandalism. Street art brings art out of the gallery and museum and into the urban environment — the intention is to engage the public. As Banksy has said in a Guardian interview  “I think a museum is a bad place to look at art; the worst context for art is other art.” (Of course since Banksy chooses to remain anonymous, one can never really be sure who said that.)

Street art, historically was done without permission, and often cleaned up or painted over shortly after it was done. The illegality and subsequent destruction ironically creates an air of consistency between the medium and the message.

Society is in a monologue with itself, not allowing in outside voices or new thoughts. Street artists playfully interact with the government that works to buff out their narratives. The expression “buff” is used to describe the grey paint that is painted over street texts by order of local governments. One of the reasons that the dominant narrative stays the same is because it discourages dialogue; hence, street artists work to encourage dialogue.

But street art is not the only art in the public space — there is also “public art”. But the intent of the champions of public art is not necessarily this kind of communication. Instead it is an attempt to use art to make the public spaces more livable by enhancing the aesthetics. A laudable goal, but not street art. And oh yes, it is done with permission.

Which brings us back to the question that started this line of thought. Are the paintings in Łódź street art? The legality I think softens the tone, but I believe it all depends on the intent of the artist. Since they are all street artists, if they intended it to be street art, then it is.

These rather esoteric issues aside, the murals in Łódź are quite remarkable. While my poor iPhone camera (or perhaps my marginal skills as a photographer) really can’t do justice to the murals, you can look at them on the Urban Forms web site as well as look at some additional walls. If you are a glutton for punishment, you can also find my photos of many of the murals here.

But this is only part of the story.

While these paintings were indeed quite engaging, there was also a randomness to them that I found bit disconcerting.

The next day that vague feeling became more focused during a visit to the Museum of Art in Łódź (there are two sites, but we only got to one).

The site we visited included Polish artists, often not that well known outside of Poland, and combined works from the beginning of the 20th century with works of post World War II artists.

The exhibit was organized around certain themes important to contemporary Poland (and whether you agree with Frank Stella who complains about curators making bad art, the curation in this case added to the experience). One theme was Autonomy and included works that showed, “During the 60s and 70s, under the Communist rule, … art functioned as a sphere of autonomy of the aesthetic experience, whereby perception could be free from the dictates of the rules imposed by state authority”. Another was Capital with works that showed how global enterprises have taken the place of the factory. One section I found thought provoking was Propaganda. The notes to the section quoted Aldous Huxely “When the individual feels, the community reels” and explained and illustrated with works, “… why art, especially the art which appeals to the autonomy of aesthetic experience, may be the best remedy for indoctrination.”

All in all it was a very satisfying visit, and one that got me thinking about the murals that I saw the day before.

How should public art be curated, not just in Łódź, but in places like Palo Alto? 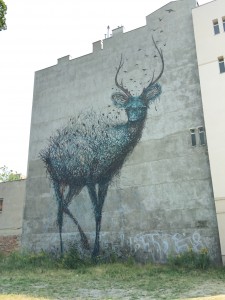 One idea is to create a consistency between the place a work is shown, and the work itself. This was particularly appropriate for a work by DALeast — a deer on a building wall with a vacant lot in front of it. The back story was that the original space was not available and the mural had to go here. What if that lot were turned into a park, making the art more consistent with its context, or perhaps the other way around?

Just an idea that intrigued me, and not applicable to all the murals we saw in Łódź, but perhaps a direction nevertheless.