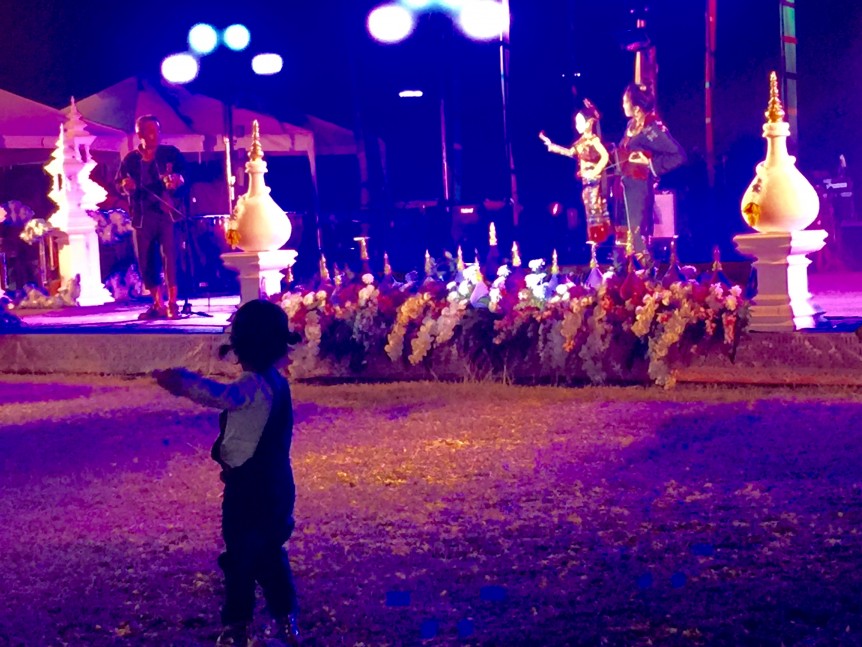 While we were planning to spend a month in Thailand, we hadn’t yet completely decided just what we would be doing there. Busy waiting for a flight from Laos to Myanmar, Linda read about the International Balloon Festival that was going to be held in Chiang Mai a few days after we were due to arrive in Bangkok. So we booked the overnight train from Bangkok to Chiang Mai, and off we went.

The balloon festival was being held on a college campus on the outskirts of Chiang Mai, and we shared a shuttle to the site with a delightful French couple who were in Chiang Mai for the winter. We spoke about our travels, as travelers do, and shared stories as the shuttle slowly, very slowly, worked its way through the Friday evening traffic to the festival. They had already been in Thailand for a while and insisted there were two places we had to see — the White Temple in Chiang Rai, and the ruins at Sukhothai. We had already decided to visit the White Temple but were up in the air about Sukhothai. But based on their enthusiasm we decided to stop there on our way back to Bangkok later in our trip. 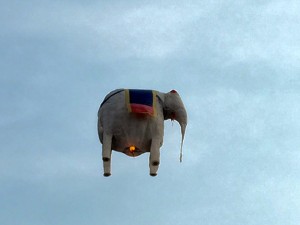 Meanwhile, back at the International Balloon Festival, we finally arrived at the site. But as we got to the large open field, we all looked at each other in some wonder. “Where are the balloons?” I said. There were supposed to be thirty of them, but all we saw in the middle of this huge expanse was a single elephant balloon that they had just finished inflating and were releasing to the heavens.

With no balloons in sight, we wandered around the perimeter of the large empty field where there were restaurant and local business tents. It was like any other festival in the U.S. and charming in a way — none of that limousine or celebrity stuff you’d expect to find at an “international festival” — just a bunch of local people and families with their children.

We had gotten there for the opening ceremonies and found some chairs and listened to the speakers. Fortunately, much of it was in English, and it was like any other big small town event — politicians extolling each other’s virtues, and guest appearances by second-tier government officials from Bangkok.

Then the entertainment started, and we caught a brief glimpse of present-day Thai culture. While the Thai music and dance was entertaining, what fascinated me was a puppet show staged primarily for the children. Thai Puppetry has been a part of Thai culture and tradition for hundreds of years — its ancient themes contain moral lessons while newly-created themes are often informational or political.

It was the children that captured my attention.

When the show began, the children started to move from their seats to sit on the ground right in front of the stage. They were mesmerized. As the action moved from a puppeteer on one side of the stage to the other side, like a flock of birds, the children moved en masse to that side.

After a while a few climbed onto the stage to be closer to the action, and after a while they got so close, and there were so many of them, they were getting in the way of the puppeteers. This required some parental intervention to keep the show going. What made it wonderful to watch was the obvious love as the parents gently guided the children back off the stage. 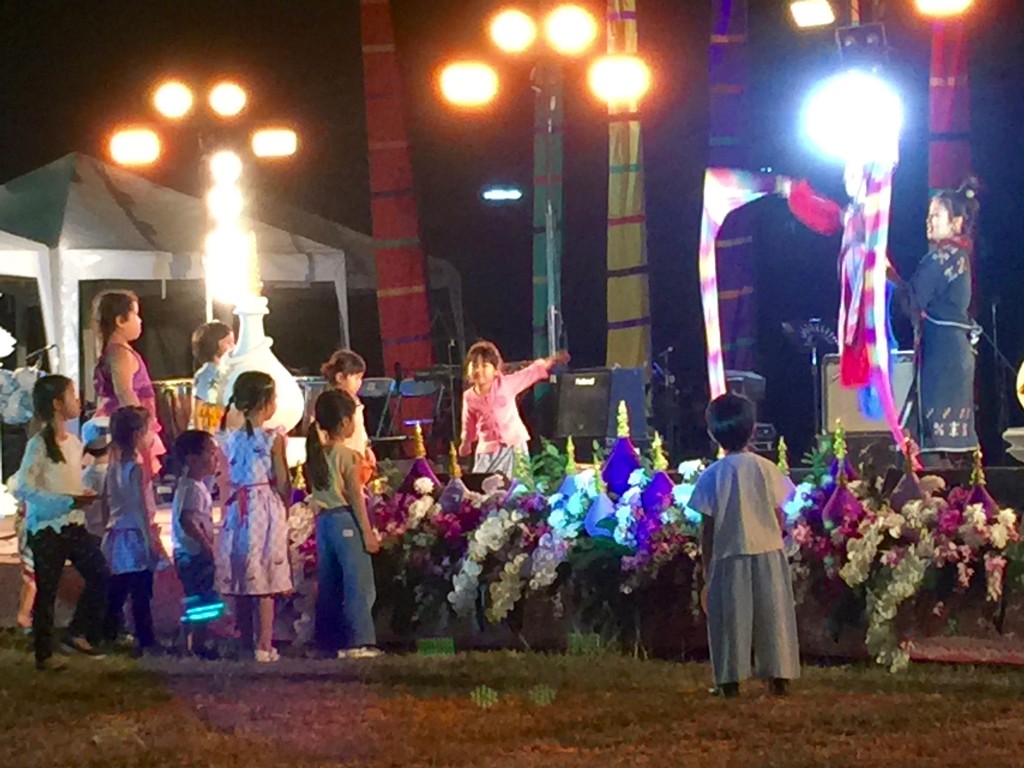 Captivated by the puppets

After the show, we turned around and saw that they had started to inflate the balloons, and even though there were far less than the thirty balloons advertised, the Balloon Night Glow show, synchronized with an original work written for the Lanna Orchestra was quite a show. 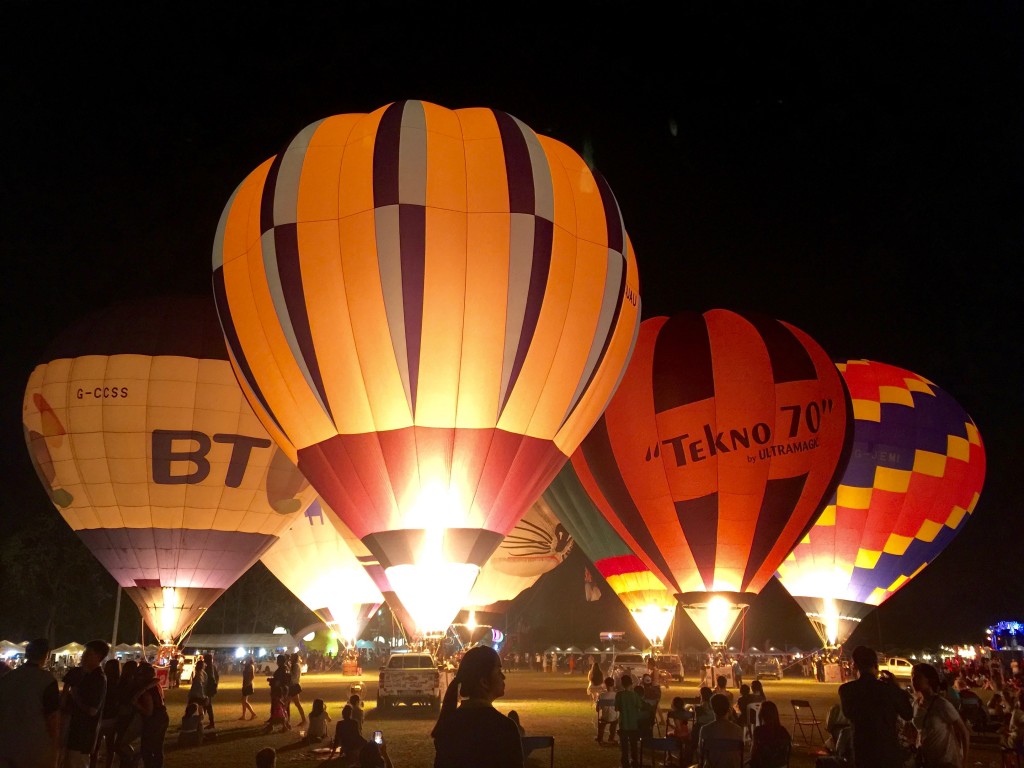 A few days later we took a trip to Chiang Rai to see the White Temple.

The white signifies the purity of the Buddha. Pieces of glass in the plaster, symbolizing the Buddha’s wisdom and the Dhamma (the Buddhist teachings), make it sparkle in the sun. 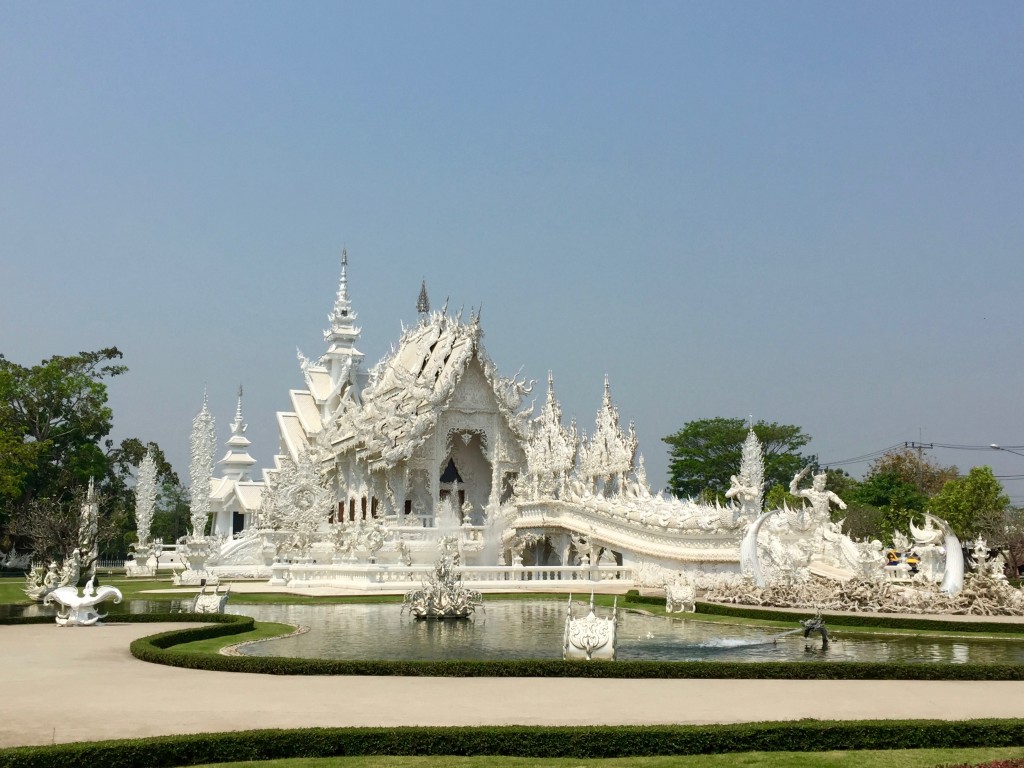 Towards the end of the 20th century, the original Wat Rong Khun was in sad shape. Restoration work on the temple had started but then stopped when the money ran out. Chalermchai Kositpipat, an artist born in Chiang Rai, decided to completely rebuild the temple, funding the project with his own money. He wanted to create a center of learning and meditation, and for people to benefit from Buddhist teachings. Work on additional buildings is still ongoing, but the temple itself is a work of art. It is deep with meaning and designed to encourage you to reflect on the Buddhist teachings — and escape from worldly temptations, desires, and greed. 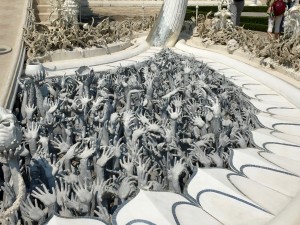 What are they all reaching for?

You enter the temple by crossing a bridge over a small lake. In front of the bridge is a circular area with hundreds of outstretched reaching hands that symbolize desire and the human suffering, and the Hell that results from it. The bridge is “the cycle of rebirth” and symbolizes crossing over from the cycle of death and rebirth into a state free of suffering by overcoming worldly temptations, desires, and greed. You are only supposed to walk one way on the bridge to the temple, and the guards stop you from walking back across the bridge (there is a different exit from the temple).

But while the outside was crowded with people spending time taking pictures and selfies, most people spent little time inside the temple. They simply looked around as they marched through, and then were gone. Probably, I cynically assume, because photographs were not permitted inside. But for us, the inside was just as spectacular, albeit more subtle, than the outside. While most of the temples we explored in the three months we had been in Southeast Asia depicted scenes from Buddhist stories, the walls of the White Temple contain scenes that depict modern representations of good and evil, including contemporary figures like Batman, Spiderman, and Elvis; villains and superheroes from movies and comics; and even the World Trade Center on September 11. On the back wall there is a golden mural of the Buddha, and a few images of the Buddha in front of it.

There is also a museum that shows the original art that was the basis for the murals in the temple, but we didn’t have enough time to completely explore it. To give you some idea of how fascinating we found the art, since we have limited space in our luggage, we haven’t been buying very much as we travel. Despite that, I bought a book on the original art for Linda, and even carry it in my luggage for her.

After a couple of weeks exploring the north of Thailand, we headed to Sukhothai.

If you’ve read some of my previous posts about Cambodia, you’ll remember that I became fascinated by the Khmer Empire’s golden age from 889 to 1434, and while there was a lot of back and forth, most of Thailand was part of the Khmer Empire during that time. In fact, according to the Northern Chronicles (the historical and quasi-historical texts written on palm leaves and stored in wats throughout the area), Suryavarman I, who reigned as King of the Khmer Empire from 1006 to 1050, was the son of the king of a minor Buddhist kingdom in Thailand and a Khmer princess who was a member of the royal family.

To give you some sense of time, 65 years later, 1135, another Suryavarman, Suryavarman II, started building Angkor Wat. The Thais remained part of the Khmer Empire over the next 100 years as Suryavarman II built Angkor Wat and Jayavarman VII went on to build Angkor Thom and most of the other temples in Angkor from 1181 to 1218. But after Jayavarman VII’s death the Khmer Empire began to disintegrate, and the Thai city-states gradually became independent from the weakened Khmer Empire. By the beginning of the fourteenth century, Sukhothai controlled most of what is present-day Thailand.

While now in ruins, Sukhothai was fascinating to explore. Its city walls form a rectangle about 2 kilometers east-west by 1.6 kilometers north-south, with a gate in the center of each wall. Inside the walls are 193 ruins including the remains of the royal palace and twenty-six temples.

Wat Mahathat (Mahathat Temple), most important and impressive temple in the Sukhothai Historical Park, was founded by Sri Indraditya between 1292 and 1347 as the main temple of the city and the Sukhothai Kingdom.  The design is Mandala based (symbolically representing the universe) with the main lotus-bud shaped chedi (stupa) in the center, enshrining relics of the Buddha, and eight smaller chedis surrounding it. What especially interested me was that the architecture was influenced by both the Ceylonese (modern Sri Lanka) and the Khmer. The four chedis at the corners are Ceylonese and the four in between show Khmer influence. 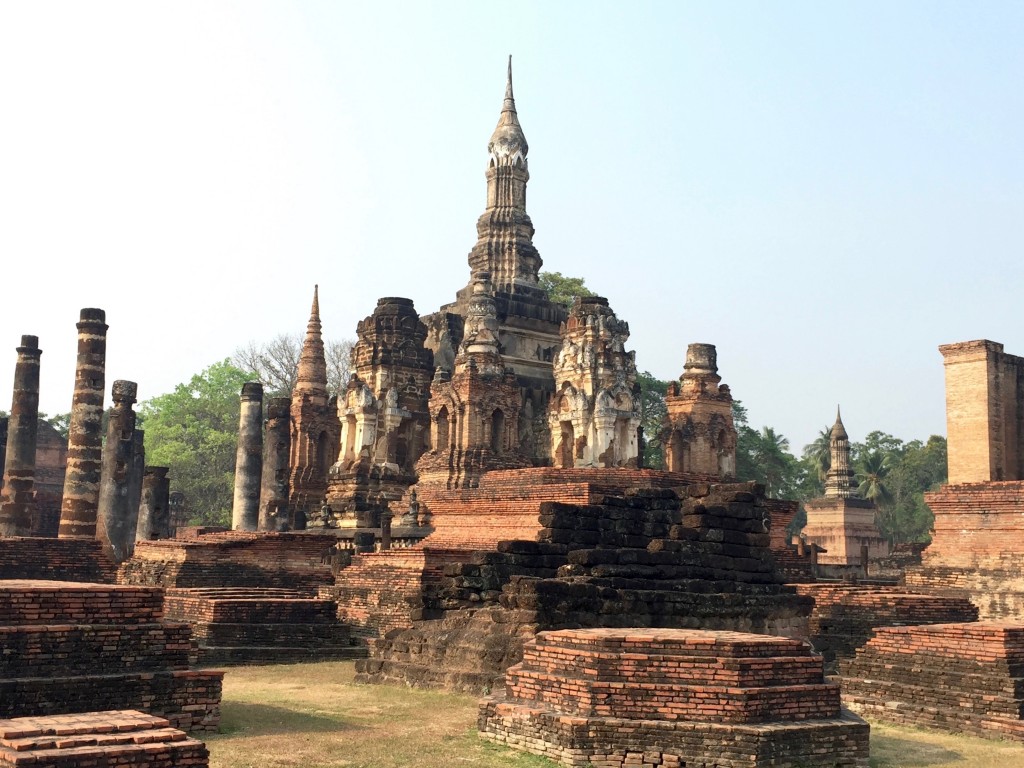 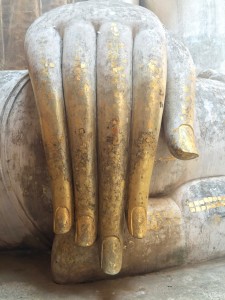 There were a lot of other interesting ruins as well, and we had a lot of fun exploring them. Wat Si Chum, built at the turn of the 12th century, contains one of the most impressive statues of Buddha in Thailand. The fingers of his right hand, which is extended down to summon the Earth Goddess are long and delicate, and have been covered in bits of gold leaf by contemporary Thais. 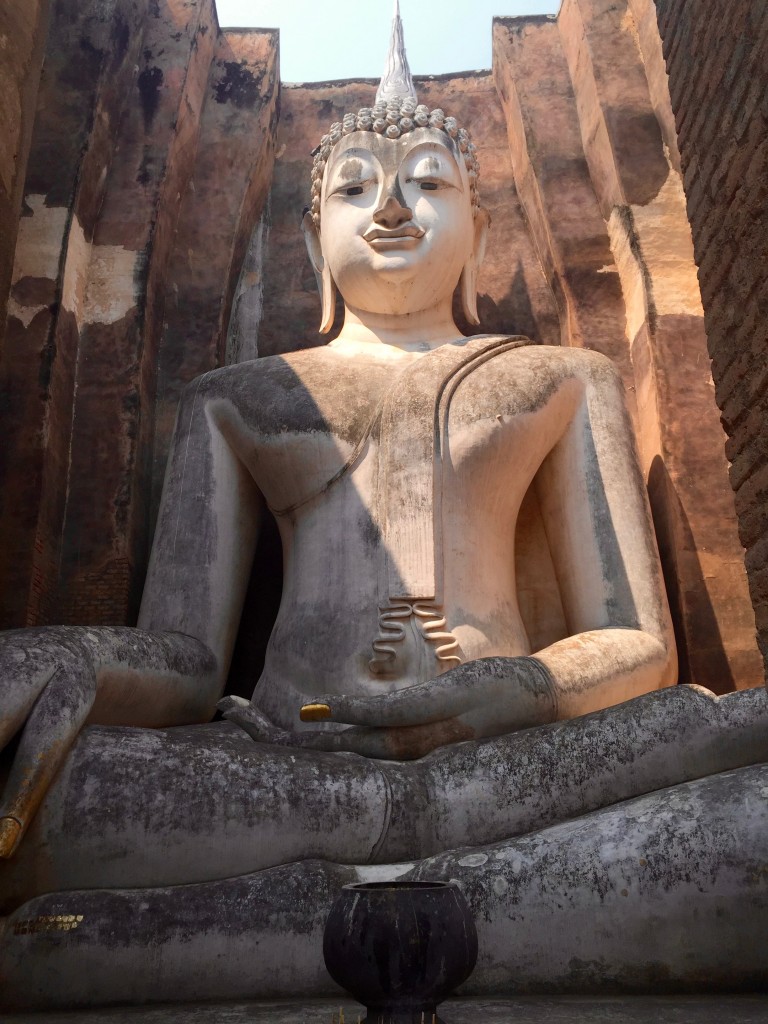 The city briefly dominated the area (including part of what is now Northern Laos) under King Ram Khamhaeng, who, tradition and legend states, established the Thai alphabet. But after his death in 1365, the kingdoms Sukhothai controlled broke away, and it was reduced back to its former local importance.

Sukhothai then fell into decline and became subject to another emerging Thai state, the Ayutthaya Kingdom in 1350, that went on to capture Angkor in 1434, ending the Khmer golden age and beginning a Thai golden age.