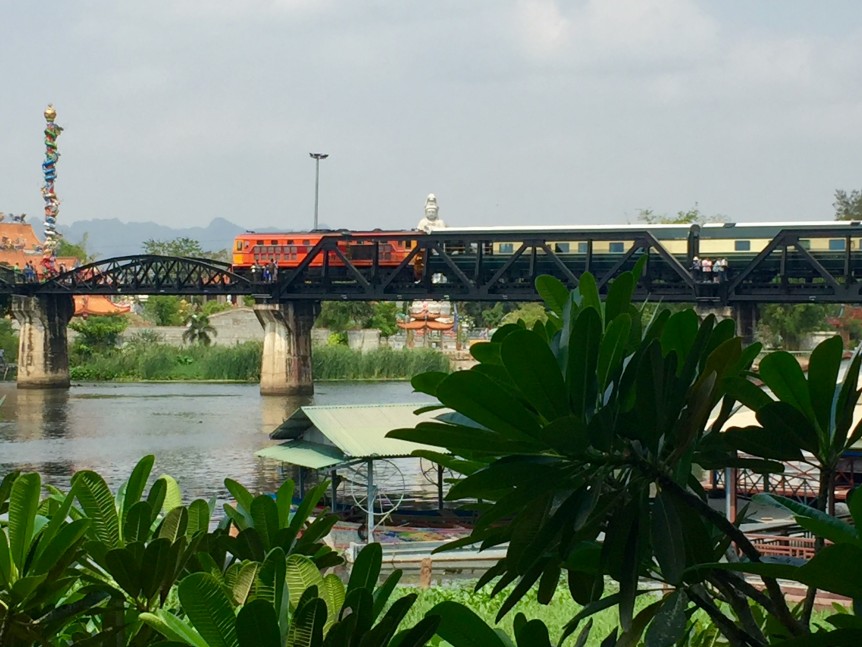 Kanchanaburi is a town in the west of Thailand, 123 kilometers west of Bangkok and the capital of Kanchanaburi Province. There really isn’t much there, and yet it is often found on most of the what-to-do-in-Thailand lists because the town claims that it is the site of a train bridge made famous in a few movies and books — a bridge over the River Kwai.

But while that celebrated bridge is long gone, despite what you might assume by reading the tourist brochures, the memories of the horrors committed by the Japanese on the prisoners and laborers who constructed the bridge remain.

On December 8, 1941, the Japanese invaded Thailand, with resistance lasting only a few hours, followed by the invasion of (British) Burma in 1942. Having conquered Singapore in February of 1942, the Japanese were sending supplies and troops by sea to Burma from there. But the Allied victory at the Battle of Midway in June 1942 inflicted devastating damage to the Japanese fleet, making it more and more difficult to protect the supply ships from American submarines and planes.

The obvious solution was to resupply their troops by rail. There was already an existing rail network from Singapore to Ban Pong (through Bangkok) and a rail network from Thanbyuzayat in Burma to Rangoon. All that was needed was to connect the two existing networks.

This was not a trivial task. When the British occupied Burma, that route, through dense, hilly jungle and across many rivers, had been surveyed by the British government and determined to be much too difficult and dangerous to build. But the Japanese had little choice, and since they could use forced labor to build it, the degree of danger it presented was of little concern.

The work started in October 1942, with 60,000 Allied prisoners of war (POWs) and more than 180,000 (how many more is not clear) Asian civilian laborers (Romusha), whom the Japanese had enticed to come to help build the line with false promises of good jobs working on the railway. The projected completion date was December 1943, but the work was completed in a year.

Limited tools and supplies made the project even more difficult than the earlier British survey had determined. Exacerbating the difficulty was the decision to build an overland route through the infamous Hellfire Pass in the Tenasserim Hills instead of a tunnel. While a tunnel could only be worked at from both ends, a cutting (the civil engineering term for cutting out the rock material on the side of the hills to lay the track bed) could be constructed at many points simultaneously, which would speed up the construction.

So the Australian, British, Dutch, and other allied Prisoners of War, along with the Romusha, worked 18 hours a day, seven days a week, to complete the cutting. Sixty-nine POWs were beaten to death by Japanese guards in the six weeks it took to build the cutting, and many more died from cholera, dysentery, starvation, and exhaustion. However, the majority of deaths were the Asian civilian laborers who were treated just as badly as the POWs. 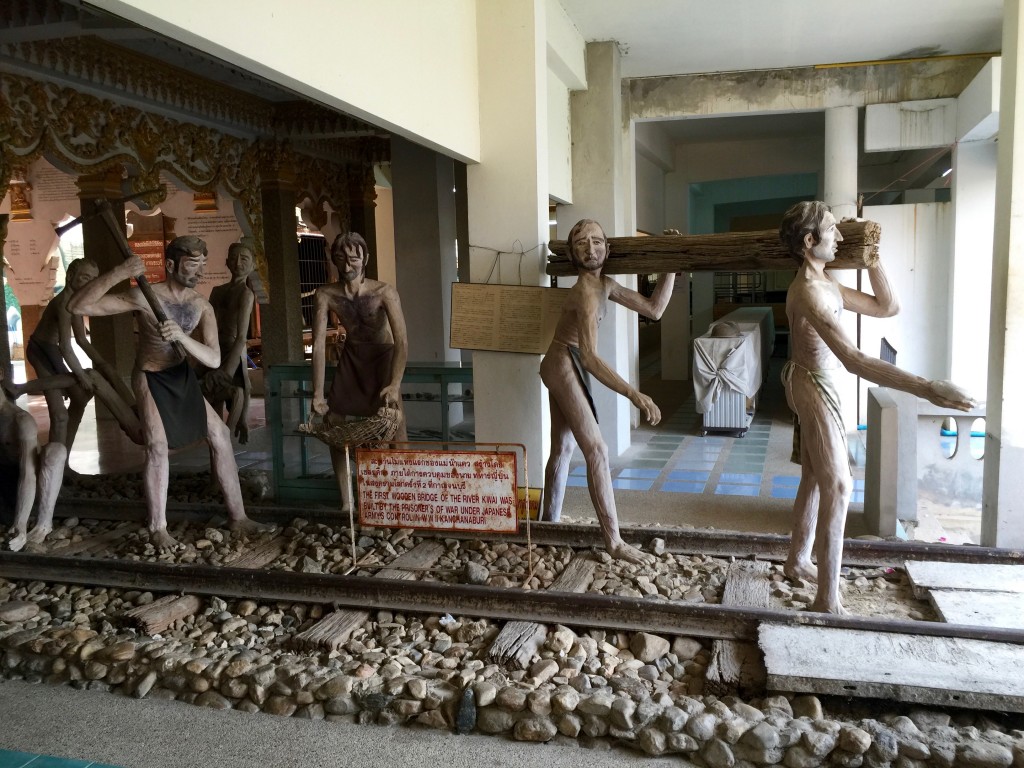 … and by the time it was completed, the Burma Railway had become the Death Railway for more than 100,000 people — 12,621 POWs (6,904 British, 2,802 Australians, 2,782 Dutch, and 133 Americans), with the rest Romusha. The Romusha deaths are little more than guesses since the Japanese kept no records of the deaths of the laborers, but the number of deaths among them has been estimated as high as fifty percent.

Part of the original railway

In Kanchanaburi, a bridge at the start of the railway, one of over 600 railroad bridges built during the railway’s construction (including six to eight long-span bridges) was immortalized in the novel and a film, The Bridge on the River Kwai. And while the movie captured the cliff-hugging tracks and the natural beauty of the surrounding mountains and valleys, both the novel and film were criticized for what they didn’t capture — the horrific conditions and treatment of prisoners. Amazingly, on the Japanese side, in a world class display of chutzpah, many Japanese complained that it demeaned the Japanese engineers and their construction ability because it showed that the British in the film were able to build a bridge that the Japanese could not. (There were several other books and movies that did a better job of showing the barbarism of the Japanese — a novel, The Narrow Road to the Deep North by Richard Flanagan, a large number of personal accounts of POW experiences, and a recent movie, The Railway Man, based on the book which I ended up reading.)

The bridge described in the book didn’t actually cross the River Kwai. The book’s author Pierre Boulle had never been to the bridge, but he knew that the Death Railway ran parallel to the River Kwae for many miles, and he therefore assumed that it was the Kwae which it crossed just north of Kanchanaburi. But the bridge actually crossed the Mae Klong river. After the film was released, the Thais had a problem when thousands of tourists came to see a the bridge over the River Kwai that never existed. However, there did exist a bridge over the Mae Klong. So, to resolve the problem, they renamed the river — and the Mae Klong became the Kwae Yai (‘Big Kwae’). 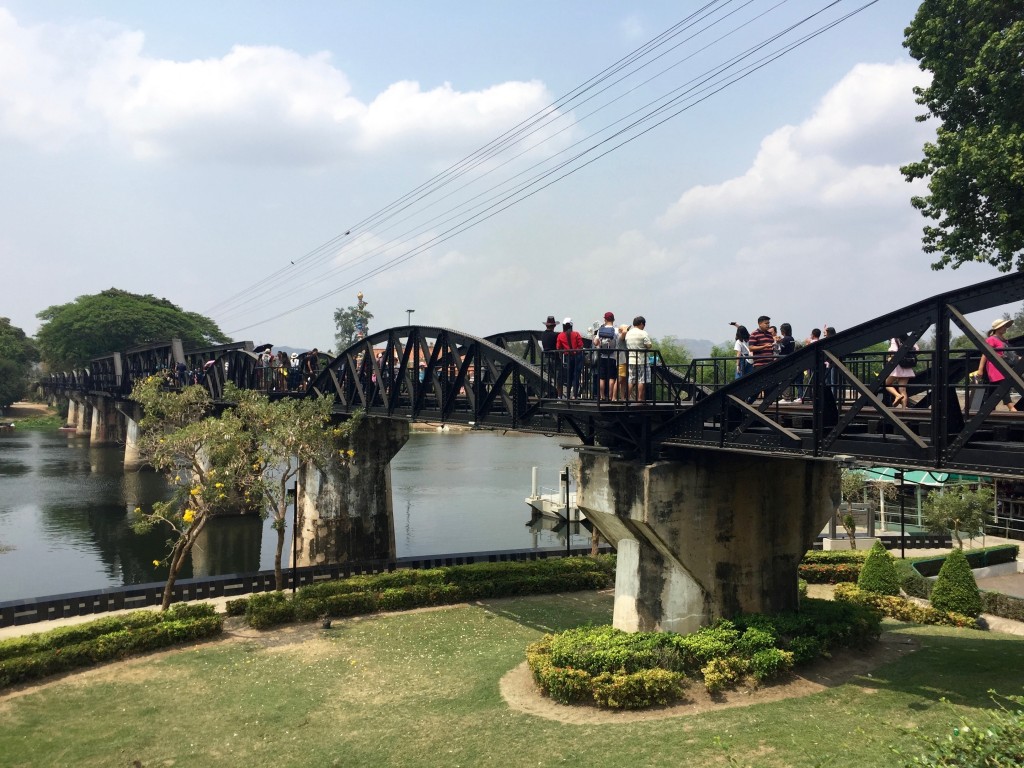 A walk across “the bridge”

Yes, you can change history. 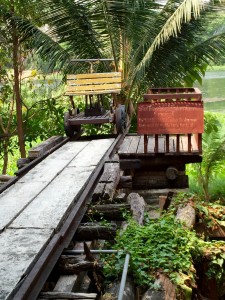 Supposedly the site of the wooden bridge

Then there was the further complication that there were actually two bridges in Kanchanaburi built by prisoners of war. The first (wooden) bridge was completed in February 1943 with a steel bridge a few months later. But the wooden bridge, the one immortalized in the movie and book, was completely destroyed by Allied bombing during the war. The steel bridge, still standing, has been skillfully repositioned as the “Bridge on the River Kwai”, even though it is only partly original (it’s still used by tourist trains, making it a true statement, but still a bit deceitful). 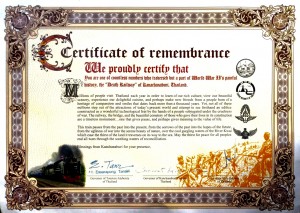 We’ve been riding on the railroad

Despite no bridge, and the wrong river for that matter … a cottage tourist industry was born. There is a War Museum (tacky at times) located in Kanchanaburi  which includes a historic steam locomotive, in addition to many places to buy souvenirs. We also rode on the train for a short distance, being two of the countless numbers who traversed the “Death Railway of Kanchanaburi”. 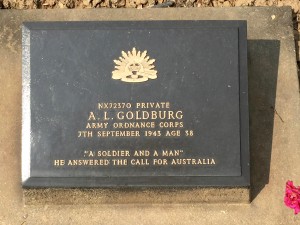 I wonder who he was

But despite the often carnival-like atmosphere around the non-bridge, Kanchanaburi and the Death Railway afford us a sobering reminder of the atrocities committed by the Japanese during WW II. The most authentic, and most moving part of what we saw was the Kanchanaburi War Cemetery, the main prisoner of war (POW) cemetery for victims of Japanese brutality while building the Burma Railway. There are 6,982 POWs buried there, mostly Australian, British, and Dutch. The remains of United States personnel were repatriated. Reading many of the inscriptions on the headstones of the young POWs was poignant and quite sad. 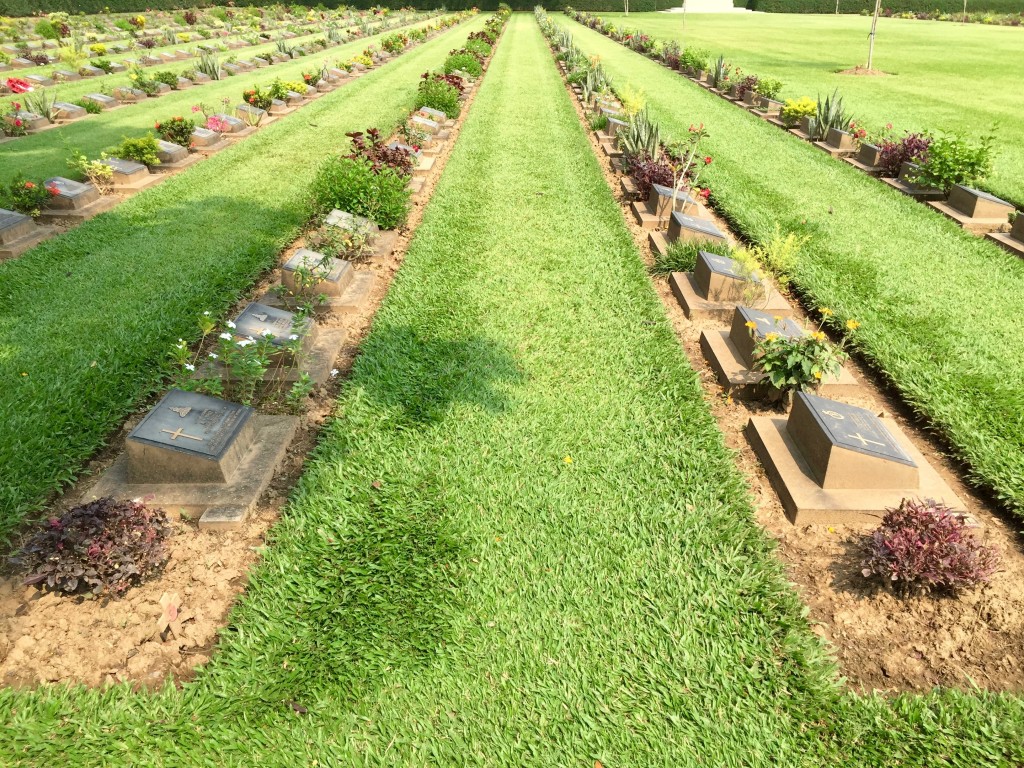 At the Kanchanaburi War Cemetery

While Kanchanaburi is an interesting example of packaging history as entertainment to attract tourists, what is more interesting is what happened after the war to the Japanese who committed war crimes on POWs and civilians.

As far as the railway was concerned, 111 Japanese military officials were tried for war crimes because of their brutalization of POWs during the construction of the railway, with 32 of these sentenced to death (it’s not clear how many were actually executed). This was, of course, only one set out of the almost uncountable number of war crimes committed by the Japanese during WW II.

Japanese war crimes have been a contentious area for both the Allies and Japan. On one hand, many in the West claim that many of the lower level Japanese soldiers should have been brought to trial and convicted of war crimes, and those that were later pardoned should not have been. On the other hand, many Japanese believe that the war crimes tribunals were unfair, and public sentiment was that war criminals were not criminals, but were victims of the war.

It’s not clear where the truth lies, but one thing is clear. The U.S. policy on Japan’s war crimes was significantly influenced by the Cold War. Japan, the Truman administration believed, could be turned into an American ally and a bulwark against the spread of communism — something hard to do if the Japanese people were alienated by continuing prosecutions of their war criminals. American policy was entirely based on political expediency, ignoring issues of legality, morality, and humanity. It has been estimated by the U.S. Justice Department’s Office of Special Investigations that at least several thousand Japanese escaped prosecution as a result of the premature termination of war crime prosecutions by the United States in 1949.

As a result, Nobusuke Kishi, a war crimes suspect jailed by the order of the Supreme Commander of the Allied Powers, was never tried because a group of influential Americans lobbied the American government to release Kishi because they considered him the best man to lead a post-war Japan in a pro-American direction. He became Prime Minister of Japan in 1957.

I like to think of this as the first implementation of  America’s Cold War tunnel-visioned foreign policy, which inevitably resulted in the war in Vietnam, the secret war in Laos, and drove the Cambodian people into the arms of the Khmer Rouge and the eventual genocide in Cambodia.

Once again political expediency trumped legality, morality, and humanity. But then again, why am I surprised?