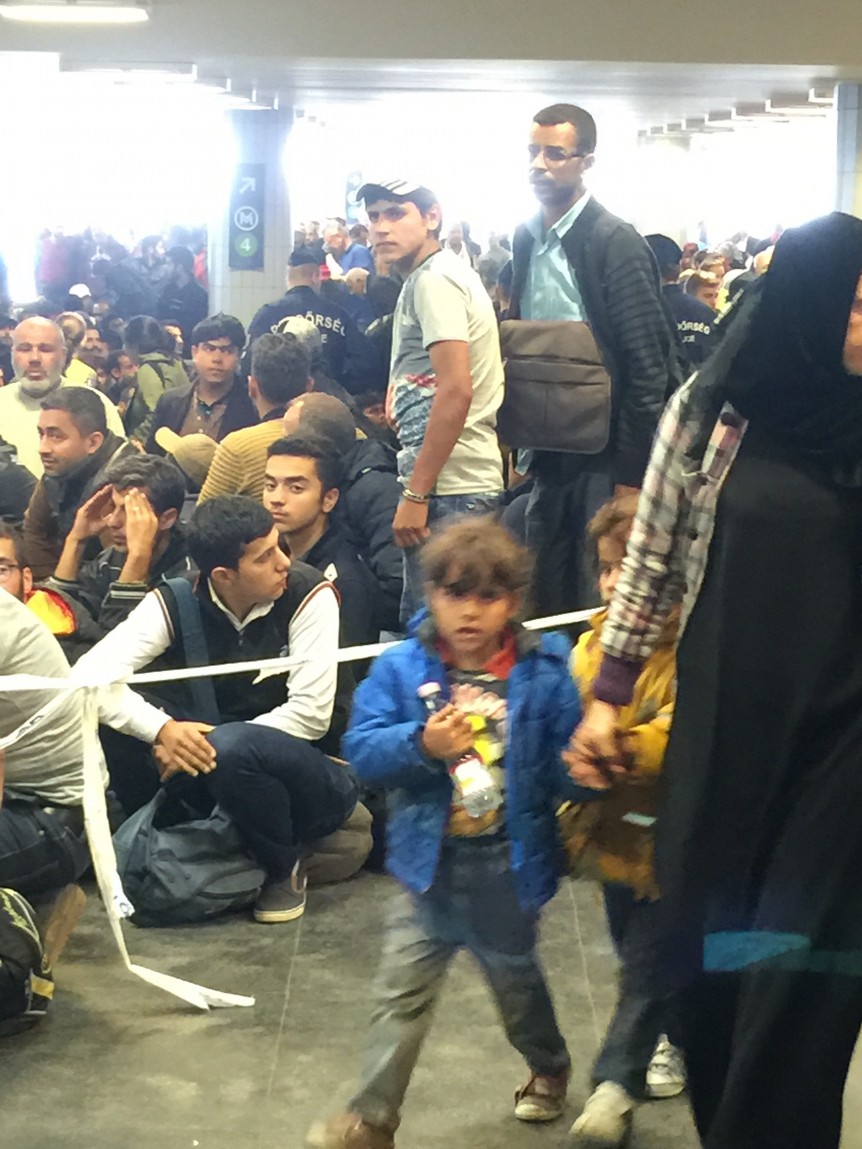 Although we plan to look for adventures on our trips, we hadn’t planned to be on the edge of a geopolitical crisis, but then again, few people do.

On our way to Budapest from Prague we arrived at the main station to find that there were no trains running to the main train station (Keleti) in Budapest. Keleti is the main gateway to the EU and Western Europe for migrants, and because of the chaos that resulted from the Hungarian government’s handling of the thousands of migrants passing through the Keleti station, they decided to close the station.

So there we were in Prague, staring at a sign that informed us that our train, was no longer going to Budapest. Instead it was going to terminate at Szob, Hungary and that to get to Budapest we would have to change to a local train that would take us to a secondary station (Nyugati) in Budapest. A train official standing in back of the sign explained that this wouldn’t be any problem and there would be railroad officials to help us in Szob.  The Hungarian authorities were expecting us (along with all the others trying to get to Budapest), and the local train would wait for us and then leave for Budapest.

So with great trepidation (mostly because we didn’t speak, or more importantly, read Czech or Hungarian) we set off on our journey.

There was of course no problem getting on the train, and as we headed south I was struck by the beauty of the fields with their scattered haystacks that I glimpsed through the tress lining the tracks.

But we got to Szob 25 minutes late, and (panic stricken) ran to the Budapest train that was (fortunately) on the next track. We got there just as the doors were closing and tried to hold them open so we could throw our luggage on board. Turned out we overreacted a bit; the doors weren’t closing because the train was leaving, they were just closing because there was no activity and the train was not scheduled to leave for several minutes.

An hour later we found ourselves at the Nyugati train station, along with lots of police. After a few more hassles (no taxis and the city center closed because of fights between rival football club supporters) we finally got to the apartment, checked in, and got to bed around 1 A.M. An exhausting, yet, in retrospect, interesting adventure.

A few days later the Keleti station was opened again and we thought we were home free, only to have the Austrian authorities close the Vienna train station to trains from Hungary. I sent emails, I made phone calls, and still on the day before we were to leave  for Vienna was no closer to figuring out what to do. So we headed over to the train station.

The person in customer support obviously hated her job, and anyone she had to deal with. “Yes there is no train to Vienna today, maybe tomorrow”. If there were no train I would need to get my money back for the unusable reservation from the Czech railroad not the Hungarian railroad. “No I can’t tell you how to contact them” (fortunately it was only 6 euro ). “If you want to get to Vienna take a train to Bratislava and change trains. Here’s the schedule. Next!”

Linda, in the meantime had been exploring and found someone in international bookings who gave us the scoop. There was no way trains to Vienna were going to be running by tomorrow since it would take at least a day to get the carriages. She explained what we needed to do, and where we needed to go and got us a reservation on the Bratislava train. She was the first and only person we found to be helpful in the three days of trying to figure out what to do.

We were upset and annoyed, but what put things into perspective was watching as the police herded migrants on to trains — that’s the only word to describe the way it was working. 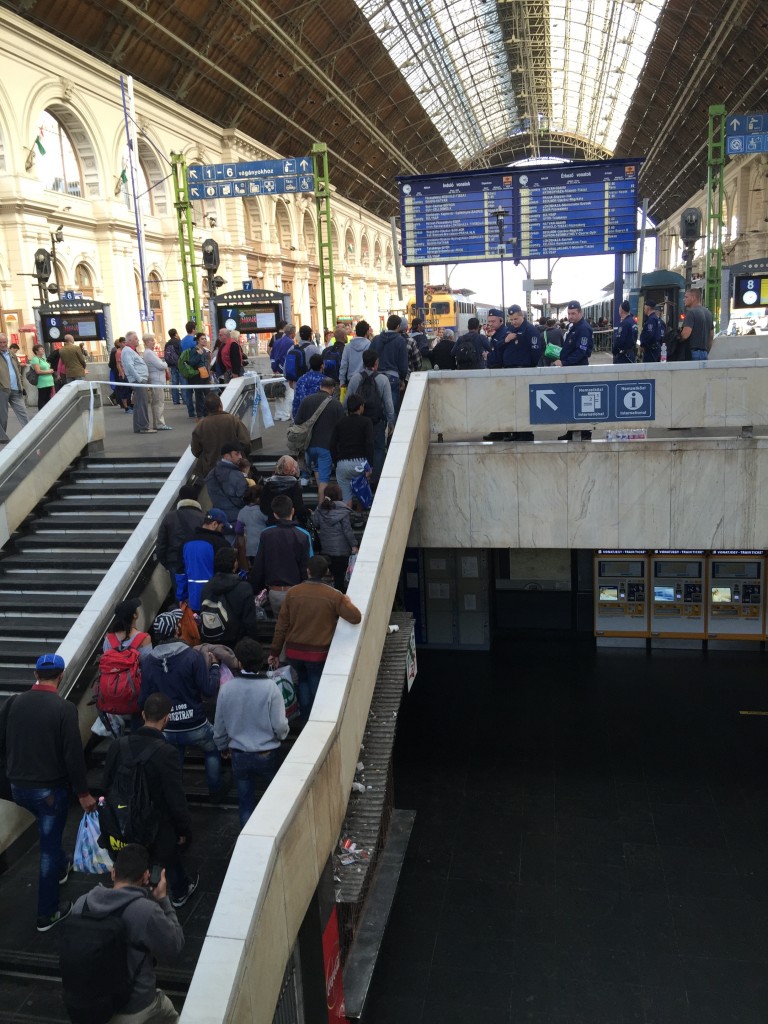 Herded on to the train

And as if that were not bad enough, to get back to the metro we found ourselves walking through the mass of people camped in the station. There were tents, and people everywhere, and what best can be described as a sort of “corral”— a group of people waiting for their turn to be herded on to a train. 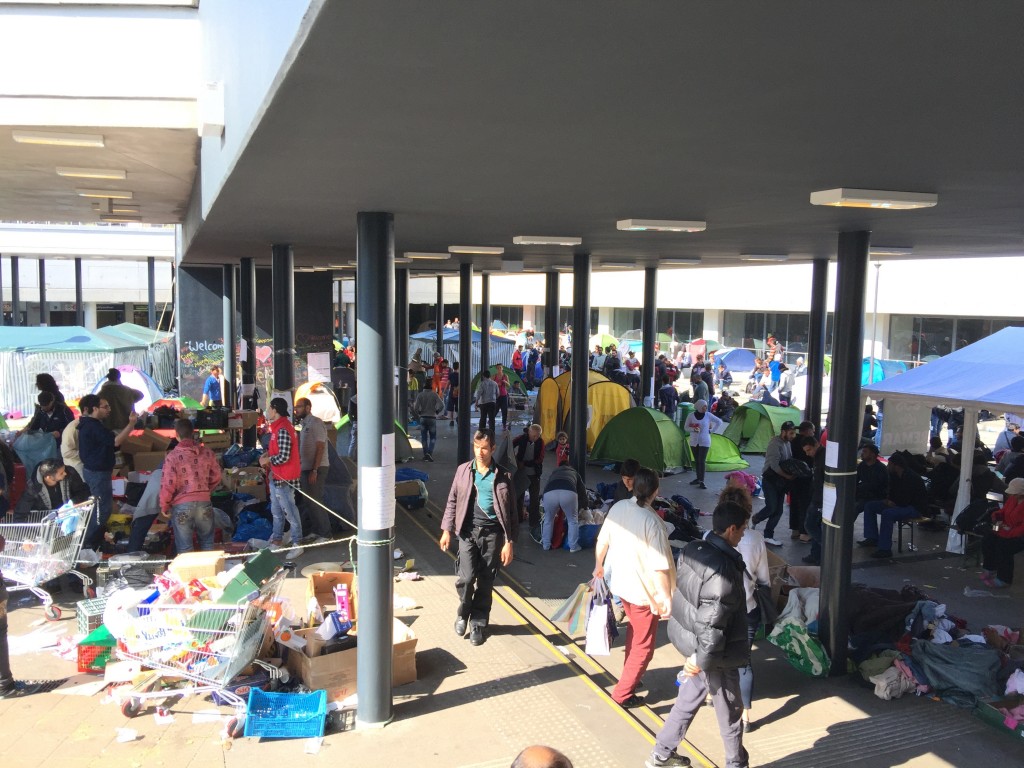 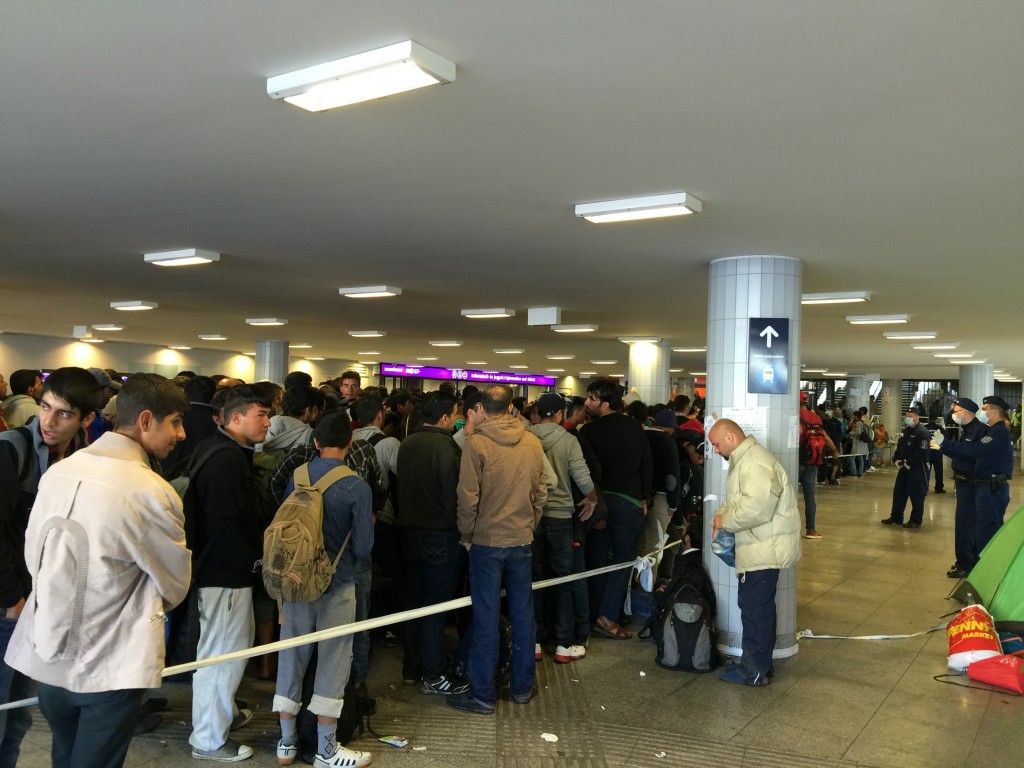 Waiting for a chance

We saw a women stuffing children’s clothes into a migrants backpack for her to take with her on her journey.

And there was garbage everywhere. 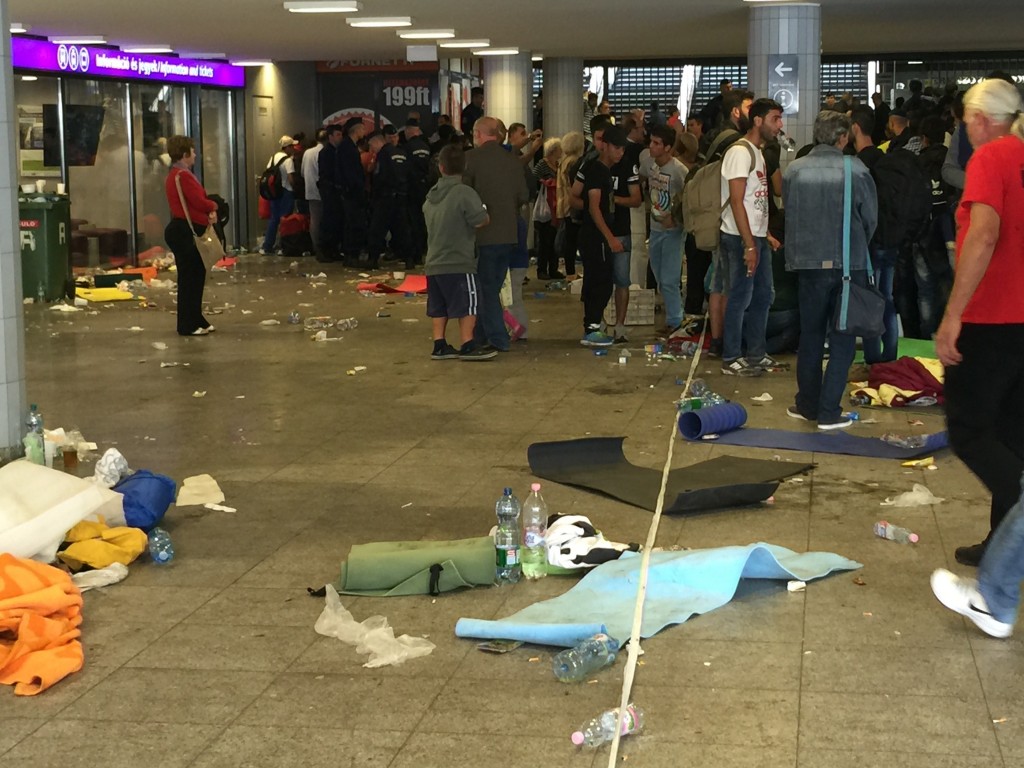 … and there was garbage everywhere 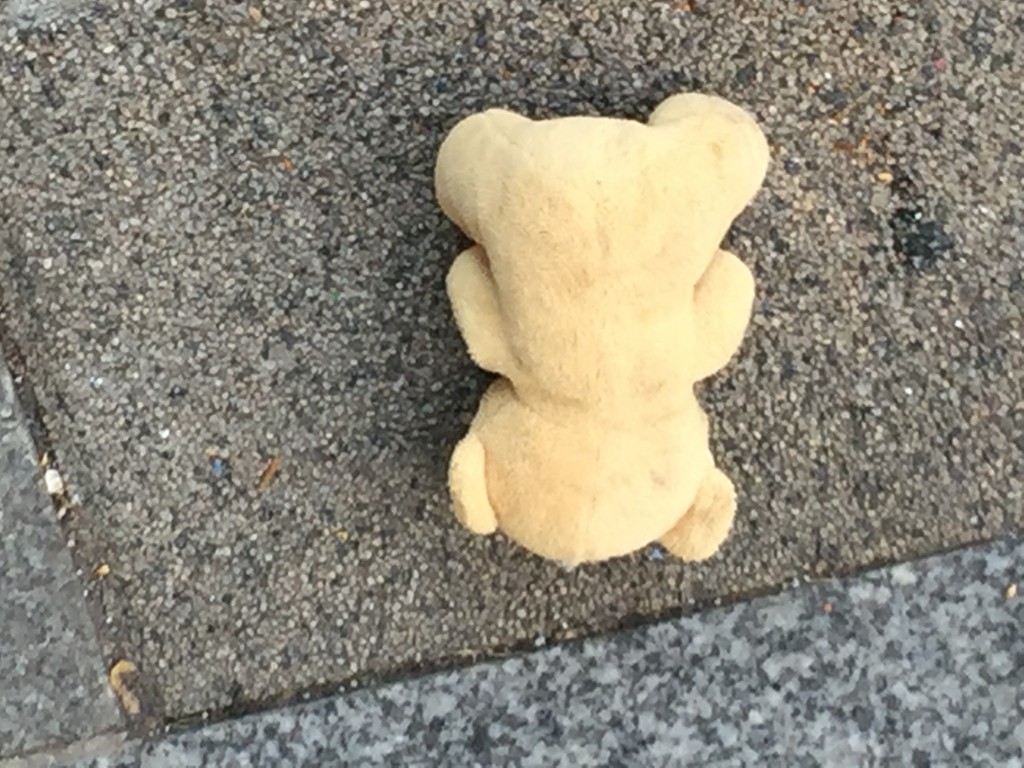 This put our inconveniences into perspective — they were, at worst, annoying and insignificant compared to what these people were going through. We were “rich” American tourists, with lots of options, not migrants that reeked of desperation.

As I reflect on our experience at the Keleti train station, I realize that most of us don’t really deserve the life we are living. I was born into a middle class family, and it was up to me to take advantage of the myriad of opportunities available to me, or even create my own. But I could have, just as easily, been born into a poor Syrian family, living in  the middle of a four and  a half year civil war and the Isis jihad.

In reality, it’s the people who have been able to climb out of the sub sub sub basement of opportunity into the open air, who one can think of as deserving of what they have.

We did get to Vienna just fine.