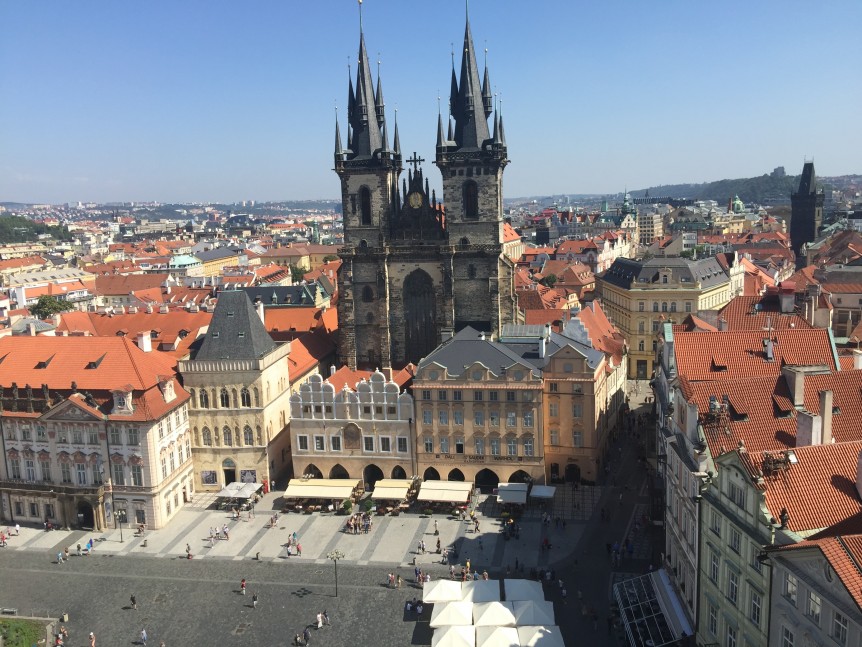 Prague as a city is a work of art; everywhere you go you’ll find spectacular architecture. The dangerous part is as you walk around you can’t stop looking up, running the risk of running into other people, sign posts, and getting hit by a car.

This was our second trip to Prague — the first time was in the early 90s just after the Velvet Revolution. Then it was a city that was transforming itself from the grayness of the Soviet era into a place where people smiled as they walked around. This time we found the main square overrun by tourists and the main street of the Jewish quarter home to upscale shops like Cartier, Bulgari, and many of the other stores you’d find in New York, London, and Paris. It took a while to get over the culture shock. Prague has also become a destination for bachelor and bachelorette parties, and any kind of party at all. Beer is almost cheaper than bottled water, and you notice that especially at 3 A.M. as packs of drunk people roam the streets. 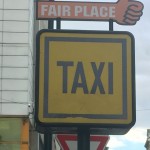 This may or not be true

When we were in Prague in the 90s we were warned that while in general people were honest and friendly, you needed to watch out  for the taxi drivers. And in that respect, some things never change. When we checked in to our Airbnb apartment at the office right near the main train station they called us a taxi, and the ride to our apartment was around $4.00 U.S. At the taxi stand at the train station the same ride would have been $28.00.

Despite all of that, we loved Prague; it is still a magical city. We were there for 9 days and didn’t even begin to scratch the surface. And Linda who always laughs at me because I want to return back to every place we visit (she likes to go to new places), tells me she would love to go back to Prague

Not only is the city itself a work of art, it is full of both indoor and outdoor art.

The highlight for both of us was a discovery we made in the Alphonse Mucha Museum. You may not recognize his name, but he was the artist that did the Art Deco posters we all know and love — the ones of Sarah Barnhart for example. You can see some of his work here and here.

So while the Alphonse Mucha museum was interesting, it was at the museum that we learned about his masterpiece  The Slav Epic Cycle. It is a series of twenty huge canvases (as large as 6 by 8 meters or about 20 by 26 feet) that celebrate the history of the Slav people. He spent a large part of his life working on it, and when the Czech people achieved independence after WW I, he felt he could finally finish it.

So off we tromped to find it, an adventure in and of itself. It’s located now in the ground floor in the Great Hall of the Veletržní Palace.

Linda and I have seen a lot of great art in our lives, but this series of paintings was breathtaking. If you go to Prague, you have got to see it.  Interestingly enough, Linda was talking to a couple about it when we got to Budapest, and they had seen it as well, and were equally amazed. The husband said that he really didm’t like to go to art museums, but that this was one experience he was grateful to have. 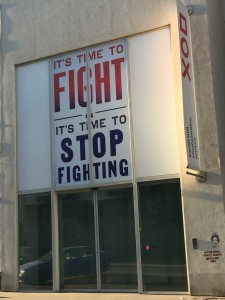 But besides a number of other great art museums in Prague (the rest of the Veletržní Palace has a lot of really good art and the DOX museum is really worth a visit), there is a lot of different kinds of very interesting outdoor art.

And there was a lot of street art, public art, and graffiti. You can see some of it here. 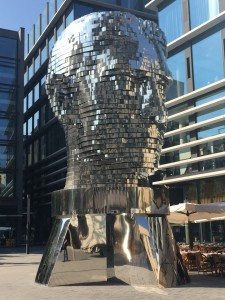 All of us (we were with our friends Jay and Joan) liked the work of Czech sculptor and street artist extraordinaire David Černý (in 1991 he painted a Soviet tank in a Prague war memorial … pink).  He has been both applauded and banned (his work Shark is an image of Saddam Hussein in a tank of formaldehyde and has been banned twice), and you can find many of his works throughout the city.  In a plaza near where we stayed, his 11 meters high bust of Kafka is composed of 42 moving layers (watching them rotate at different times is really amazing).

There is a lot of other street art as well, but what is really striking about Prague is its graffiti (you can find some of it in my photos).

There is a public wall near the Florenc metro station that offers legal tagging. The wall is self policed — it is not a wall for beginners. If a beginner does do something stupid — like painting over a “quality” work with something amateurish — they are visited, asked for some money (to replace it) and directed elsewhere. 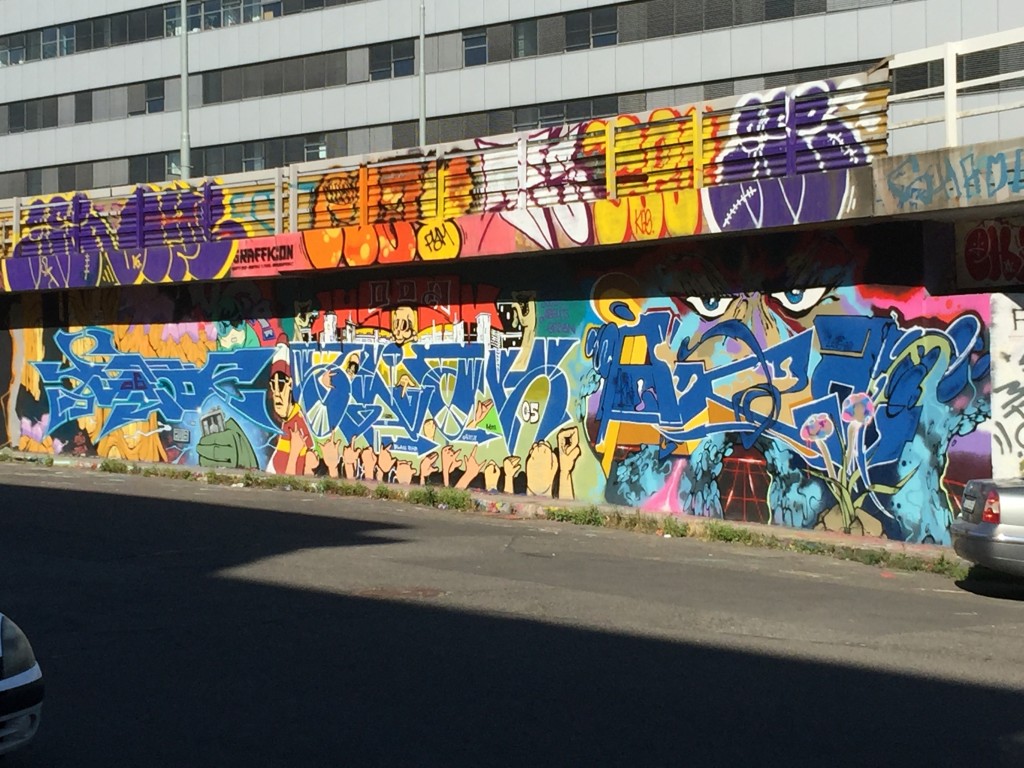 But street art and tagging is not just about the visual aspects of art. It is also deeply routed in Czech politics, and that is what makes it much more interesting.

Take the John Lennon wall, for example, After his murder on December 8, 1980, his image was painted on a wall in a secluded square opposite the French Embassy (there is a niche on the wall that looks like a tombstone), along with political graffiti and Beatles lyrics. 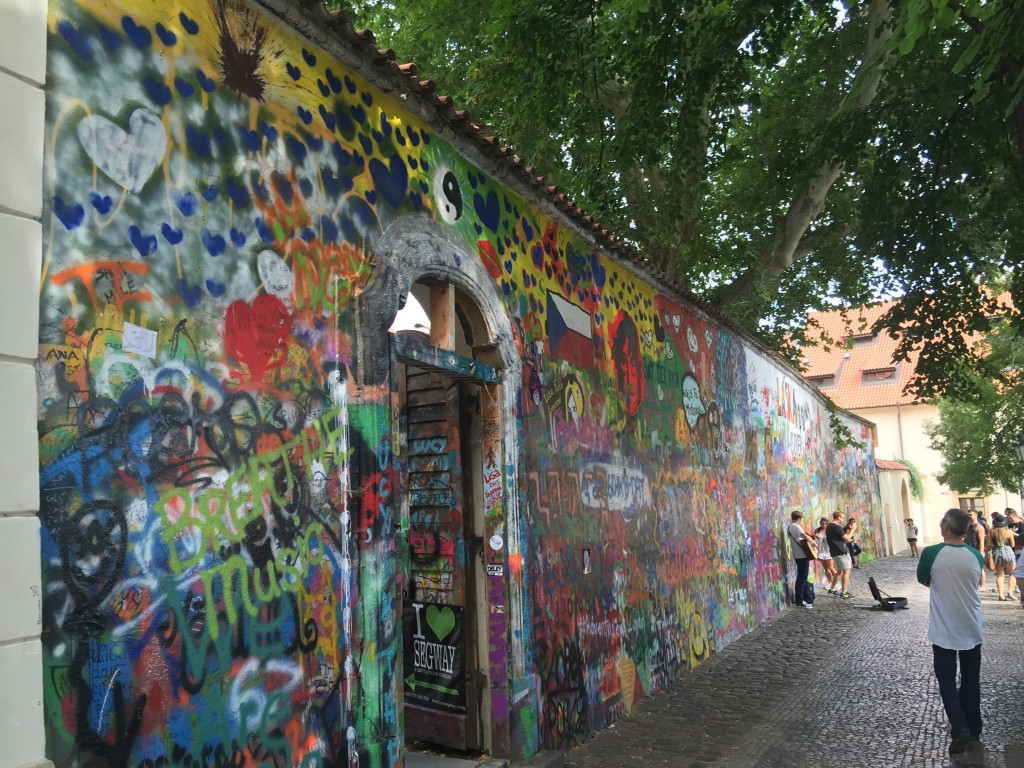 In 1988, the wall was a source of irritation for the communist regime of Gustáv Husák. Young Czechs would write grievances on the wall, and that led to a clash between hundreds of students and security police on the nearby Charles Bridge.

This tradition of political activism by Czech artists is still alive and well.

Ztohoven is a Czech guerrilla artist collective known for its artistically motivated pranks (in the sixties we called this street theater). They use art and theater to challenge public perceptions of society.

At the 40th meeting of the Chamber of Deputies of the Czech Republic Parliament Ztohoven managed to send 585 SMS messages directly to cell phones of deputies, government members, selected members of the President of the Czech Republic office including the president himself and selected journalists. While people were watching a live broadcast from Congress on Czech TV, they could see their elected officials staring at their mobiles, and looking around for the authors of messages. Selected journalists were asked to reserve their time for a government declaration of “The Moral Reform.” Later that day Ztohoven posted The Manifest of The Moral Reform as well as the content of the messages and who they were sent to and supposedly from. The text messages called for a moral reform in Czech politics across political parties — to forget personal differences and work towards a better future for the Czech nation.

In November, 2012, the group published cell phone numbers of Czech deputies and the President as a part of the exhibition Morální reforma (The Moral Reform) in the DOX museum in Prague. 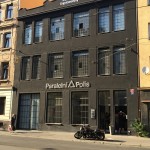 In 2014 they opened up the Paralelní Polis in Holešovice, a hacker space with a Bitcoin-only coffee shop.

The idea was to create a space, dedicated to people who search for another way to use and apply modern technologies. Besides the café, there’s a library , and an experimental “maker space”, where people can experiment with different technologies. 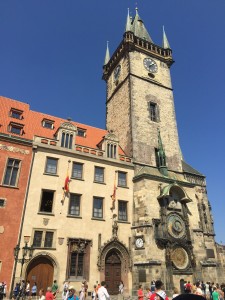 Of course we also did the usual tourist stuff (we are tourists after all) — the Castle, the Prague astronomical clock and so on. The clock itself is amazing. It was first installed in 1410, and it is  the third-oldest astronomical clock in the world, and the oldest one still working. It is composed of the astronomical dial that shows the position of the sun and moon in the sky and various astronomical details, “The Walk of the Apostles”, an hourly show of figures of the Apostles and other moving sculptures (including a figure of Death striking the time; and a calendar dial with medallions representing the months). It is so complex, that after it was damaged in WW II, it took three years to get it working again.

One thing that struck me as we were looking at the astronomical clock, is that while the digital world is really useful, there is an aesthetic appeal to mechanical devices that is often either missing, or not so apparent, in digital devices. There is a kind of precision and careful craftsmanship that makes mechanical clocks and watches works of art as well as functional time pieces.

And as you wander through Prague itself, the same could be said about its Gothic, Renaissance and Baroque architecture in contrast to its modern glass and steel boxes.