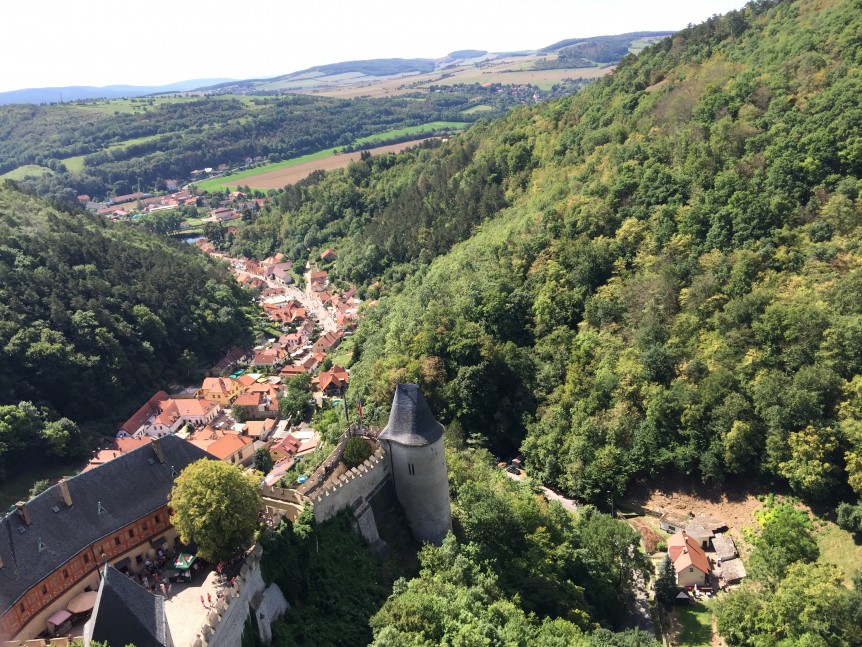 We got to Prague a few days before our friends Joan and Jay so we decided to explore outside of the city before they arrived.  We had asked the manager of the Airbnb apartment we were sharing with them if she had any suggestions for day trips, and she told us about this strange church in Kutná Hora just outside the city, but it sounded a bit creepy to her. The church, she had heard, was made of human bones. This sounded like something that in good conscience we couldn’t pass up, so the next day off we went.

Kutná Hora and the neighboring town of Sedlec are a UNESCO World Heritage Site. While the star attraction is St. Barbara’s Church (quite a spectacular five-naved Gothic church begun in 1388), we were really interested in this bone church.

Well, it really wasn’t a bone church, it was an ossuary — a site that serves as the final resting place of human skeletal remains — used when burial space is scarce. A body is first buried in a temporary grave, then after some years the skeletal remains are removed and placed in an ossuary.

There are other ossuaries in Europe (who knew?), but what makes this one special is the arrangement of the bones.

In 1278 Henry, the abbot of Sedlec, took with him a handful of earth from Golgotha (the hill on which Jesus was crucified) that he sprinkled over the cemetery of Sedlec monastery (founded In 1142) making the cemetery famous. Then, like now, this idea of “specialness” attracted many wealthy people, and they wanted to be buried there. The burial ground was subsequently enlarged during the epidemics of plague in the 14th century and during the Hussite wars in the first quarter of the 15th century.

But in the 15th century the cemetery was near capacity, so the monks built the ossuary in order to make room in the cemetery for more burials. It wasn’t until 1870 that the collected piles of bones were put to any kind of artistic use. That year Frantisek Rint, a local wood carver, was appointed to place the bones in order – but it’s unclear whether his bone art was exactly what the church had in mind. 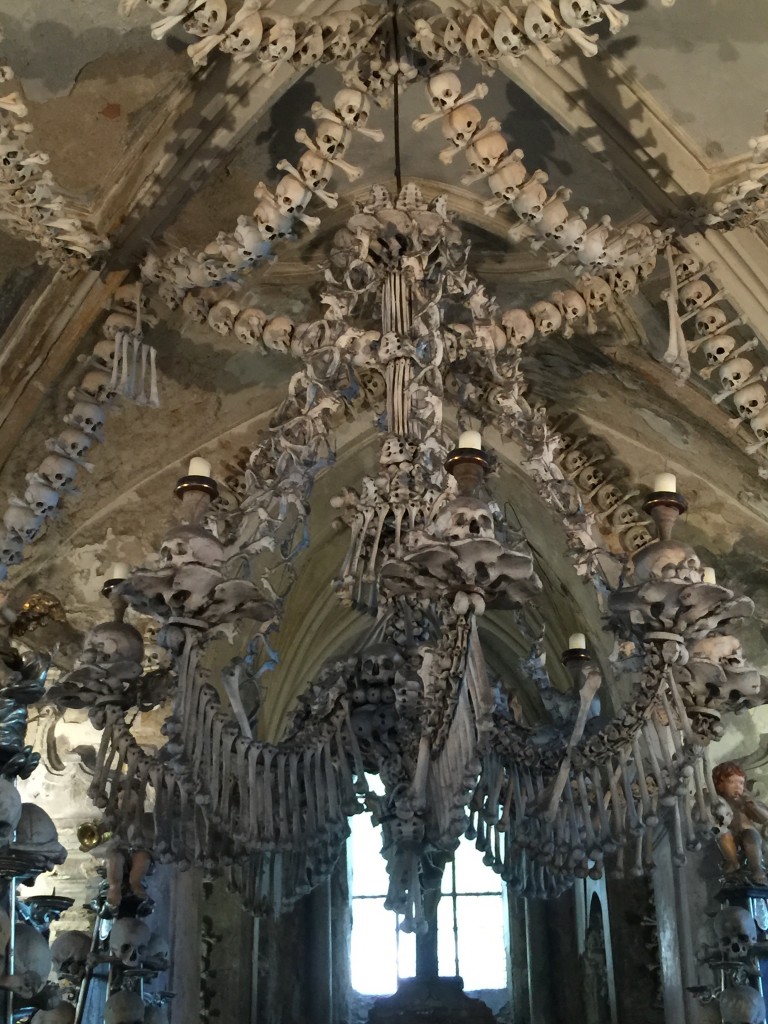 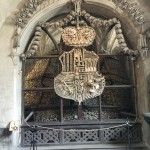 House of Schwarzenberga coat of arms 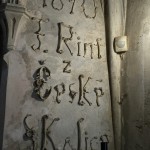 Among the decorations in the Sedlec Ossuary, is a massive chandelier (that actually works) and contains at least one of every bone in the human body, a coat of arms of the House of Schwarzenberga,  and Frantisek Rint’s signature and the date crafted in bones near the church’s entrance.

The pictures can’t do it justice, you have to see this for yourself.

And, while the primary reason for our visit was to see the famous Ossuary, just down the road we found the Gothic Cathedral of Our Lady — one of the more charming churches that we have visited. 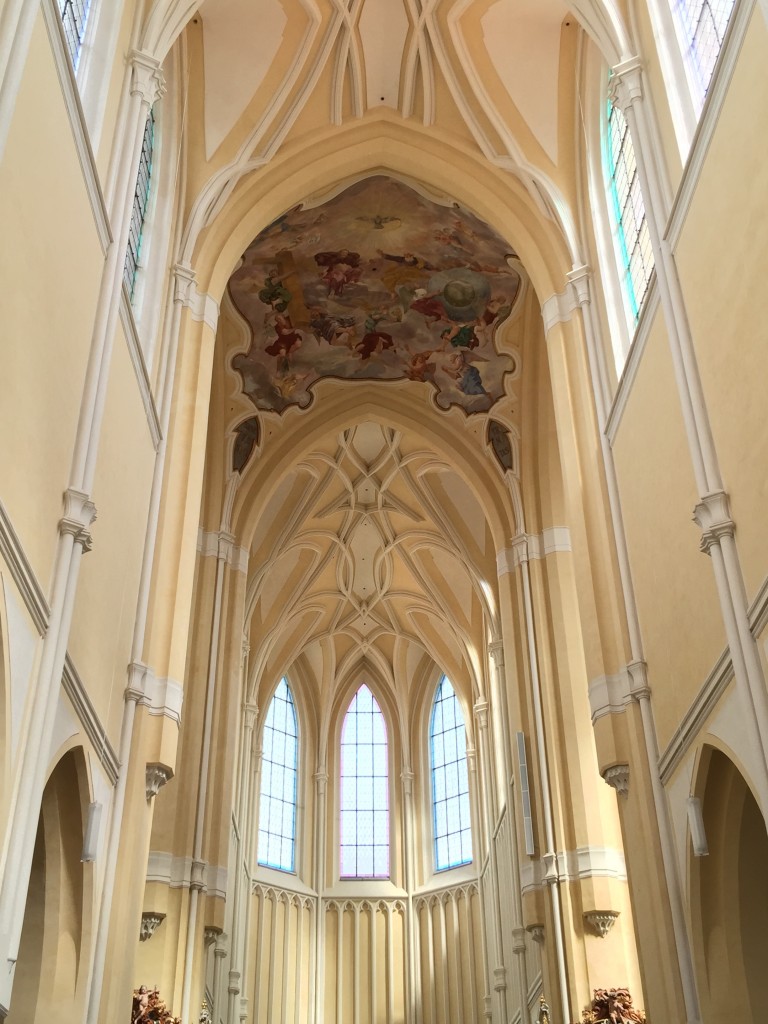 Gothic Cathedral of Our Lady 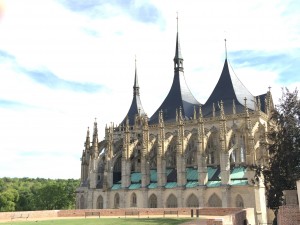 We also did get to St. Barbara’s Church which was magnificent, but frankly, not as interesting as the Ossuary. 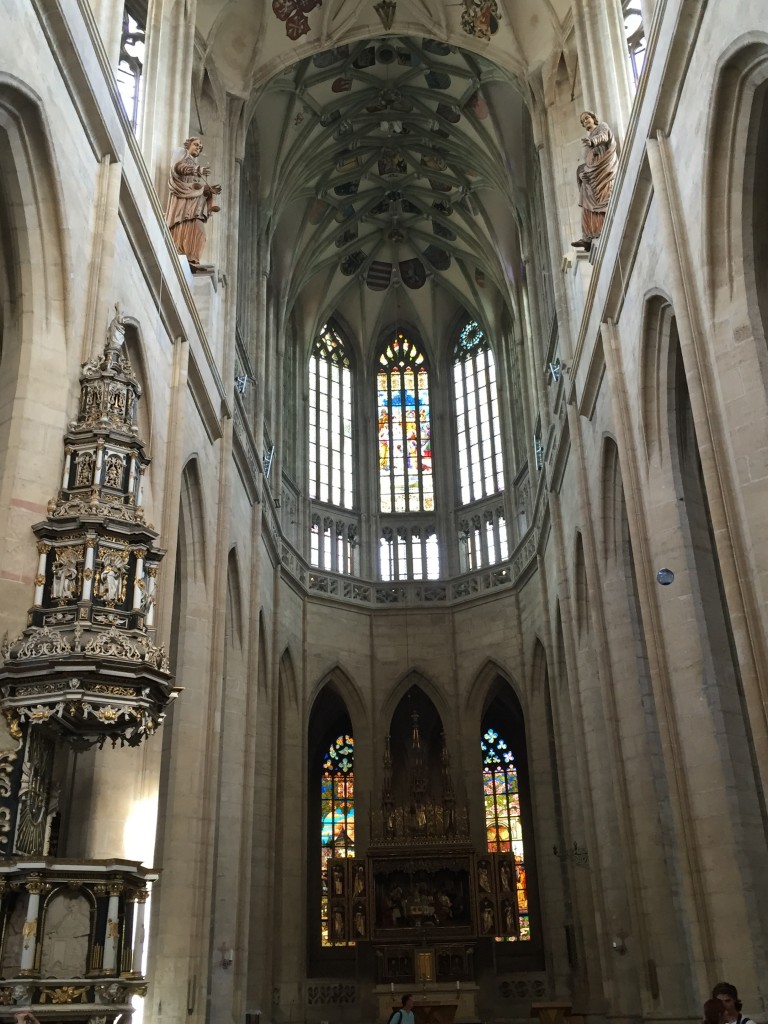 The next day we took another day trip, this one to Karlštejn Castle, a large Gothic castle founded in 1348 AD by Charles IV, Holy Roman Emperor-elect and King of Bohemia, that served as a place for safekeeping the Imperial Regalia as well as the Bohemian/Czech crown jewels, holy relics, and other royal treasures. 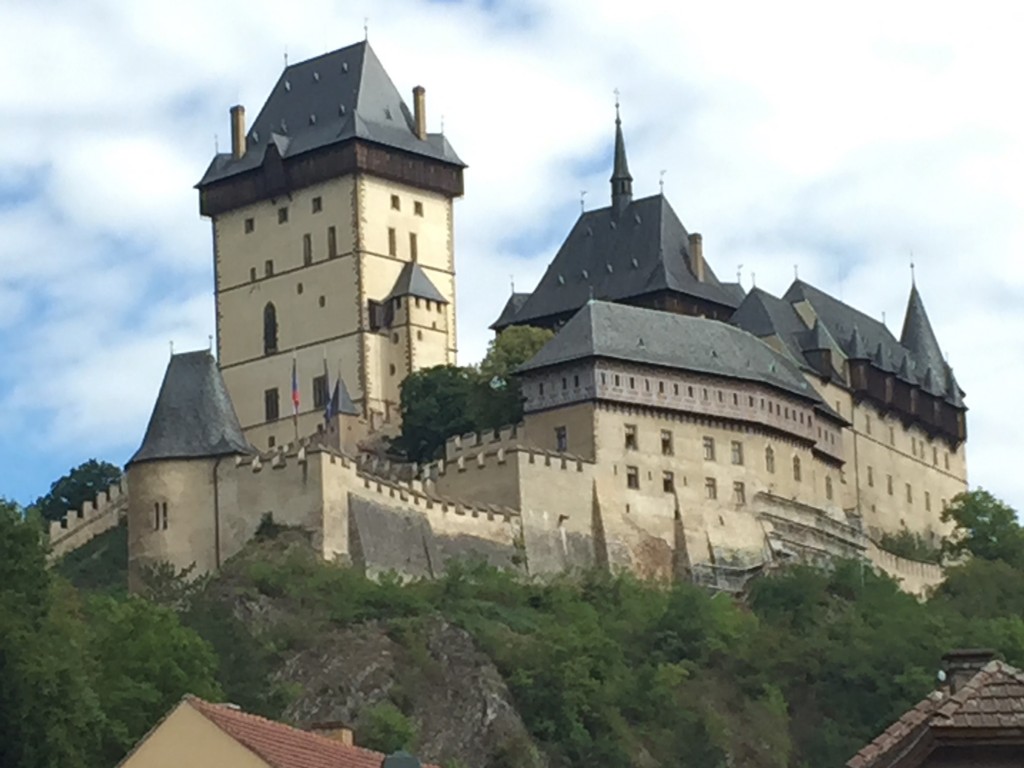 Karlštejn Castle, at the top of the hill

With our usual flair (meaning no real planning— let’s show up and see what happens) we got off the train at the  Karlstejn train station and just followed the crowd, and continued to follow the crowd, and continued to follow the crowd, for more than a mile (2+ km), uphill,  in 95+ degree (Fahrenheit or the 35+ in Celsius) heat. There is a price you sometimes pay for spontaneity of course, and we should have expected this. Castles are almost always on the top of mountains (or really big hills) because they are more easily defended.

On the way up we passed a wagon full of people drawn by two horses that were moving even slower that we were. We felt almost as sorry for the horses as we felt for ourselves, and wondered who was worse off.

This was my first castle, on this trip, although I have been to a few many years ago, I think, although perhaps I have been to some in the past I don’t remember any. It was quite impressive and the views from the top were spectacular. And did I mention more than a mile (2+ km) uphill walk in 90+ degree (Fahrenheit or 30”s in Celsius) heat? Located about 30 km southwest of Prague above the village of the same name, it is one of the most famous and most frequently visited castles in the Czech Republic.

On the way back I left our train compartment and stood in the corridor and looked out the open  window and simply watched the countryside roll buy. Outside of Prague it is still quite rural, and I can’t begin to tell you how satisfying it was, standing there, with a breeze from the open train window, and watching the rolling hills and copses of trees as we sped past.

After that two day “respite”, we were ready to tackle Prague with Joan and Jay.