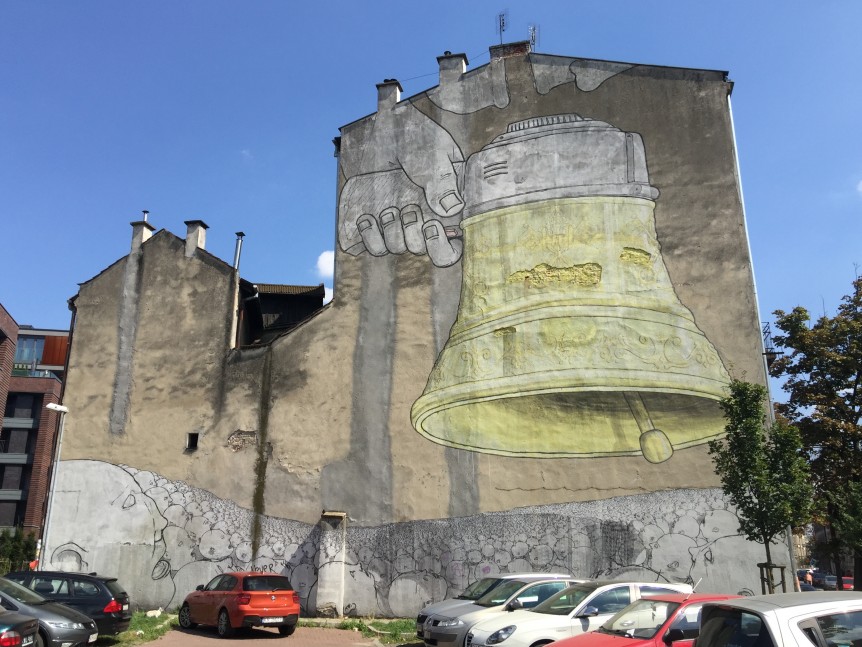 There is quite a bit of street art in Kraków, and you can see my photographs of them here.  Our guide Pavel of Free Walking Tours (which I highly recommend) showed us around and give us some background on the works we saw. Most of the art, although not all, was in Kazimierz (the Jewish district) and a couple of pieces were created by artists invited by the Jewish Culture Festivals of 2013 and 2014.

During Kraków’s 23rd Festival of Jewish Culture, Pil Peled (a well know Israeli street artist) was invited to create a mural to be a visible symbol of Jewish identity of Kazimierz. The wall that would be painted was on a building next to an abandoned lot. The area was a little dicey, and the festival organizers hoped that the new mural would serve to revitalize the area.

On the Festival of Jewish Culture website Pil Peled explains: “Judah was the sign for the Zionism. With his brave and honest we got the name ‘Jude’. The young kid presents the small and afraid people. And mixed together with the strong lion, symbolizes the Jews, who has fought to survive. That image can reflex on the inner child inside of all of us. A need to fight our fears.“

And it worked. Soon after the mural was created a food truck that served Belgian Fries moved onto this lot. This was a very hip food in Kraków and attracted lots of people (I didn’t try them, but Linda told me the fries were really good), and the vacant lot grew into a food truck village. This was both the good news and the bad news. The good news was the area was revitalized; the bad news is some of the trucks partially obscure the marvelous work. 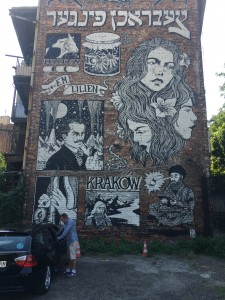 Dedicated to the Bosak family

Not far from Pil Peled’s Judah mural, during the 24th Festival of Jewish Culture, collective Broken Fingaz was invited to paint a new art work on the wall of a building that was built by a Kraków Jewish family — the Bosaks (Marek Bosak was one Oskar Schindler’s survivors). The family had lived in the building for 400 years and after the war the family moved to Israel. Despite the recovery of property rights, they decided not to return to Poland. Broken Fingaz, after learning the history of the building and after meeting Bosak family members, dedicated the mural to the memory of all Bosak family members. Their usual style has many small colorful elements that together create a narration. However they painted this mural in black and white colors since it is inspired by the art of Ephraim Lilien, a leading art nouveau artist. (A famous photo portrait of Theodore Herzl was made by Lilien.) 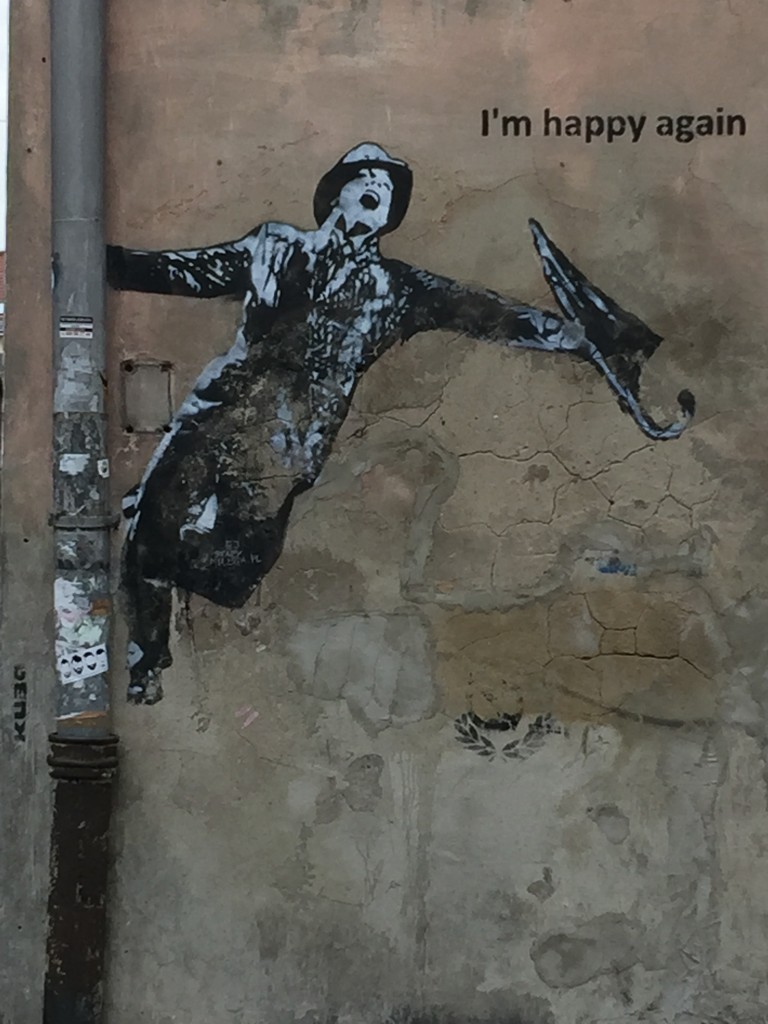 Singing in the rain, and we’re happy again

Of course street art in Kraków, and even in Kazimierz, is not just about Jewish identity.  The street artist Kuba uses street art as a symbol for regeneration of a city. His stencil of Gene Kelly singing “I’m Happy Again” is an engaging message about a city still recovering from the horrors of both WW II and the subsequent Communist occupation. 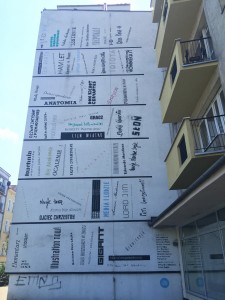 Some of the murals we saw were closer to public service messages than art.

A mural on one of the houses on in the Podgórze district, was part of a school project to promote reading In Poland. Graphic designer Aleksandra Toborowicz has created a mural that represents a book case lined with various Polish classics (I never knew Joseph Conrad was Polish). Each title is written in a unique typeface, and the result is a typographic collage that was painted using a variety of techniques: stencil, free hand and calligraphy. 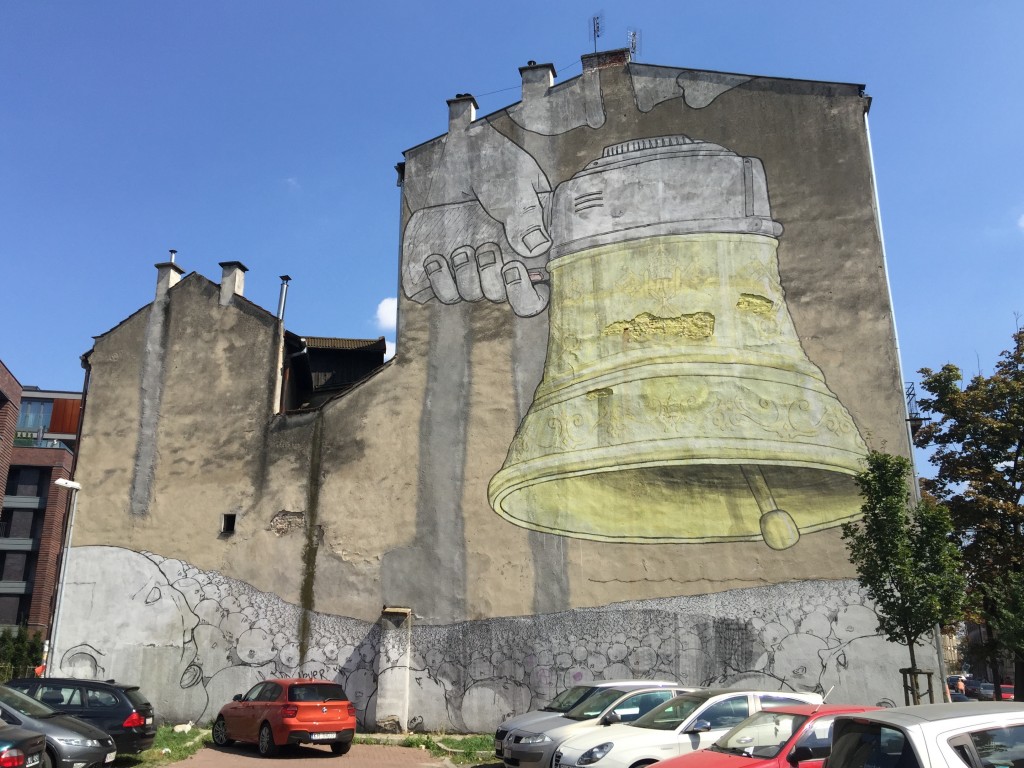 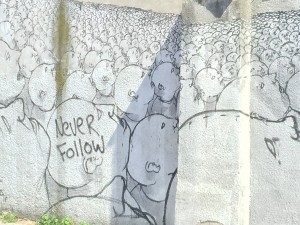 More in line with a street art point of view, the Italian artist Blu created an overtly political mural — Ding Dong Dumb. It is of a big bell that includes symbols of the Papal State (the crossed keys) that transforms into a bull horn and includes the multitude devoutly staring up at the wielder of the bell/bull horn. The inscription “Never Follow” sends a clear message. 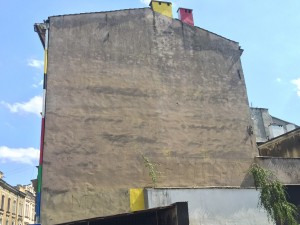 Beauty is in the eye of the beholder

One of the murals I really liked wasn’t really a mural at all. Lest we get too carried away with ourselves, the artist simply added a rainbow frame to the building wall. His view being that the building wall itself is beautiful, he just needs to call your attention to its beauty.

There is a lot of other street art in Kraków  You can see all of my photos here.

As Pavel showed us street art, we talked about art, politics, and our travel plans. Afterwards we had lunch, and later he invited us to his mother’s home for a delicious Polish dinner. Meeting her (she spoke no English but understood some) allowed us to get past the ordinary interactions you have with people who live where you travel to, and get at least a glimpse into what they are like on a personal level. The homemade wine and the Zubrowka Bison Grass vodka (which has a really nice taste) we drank also helped with that considerably.