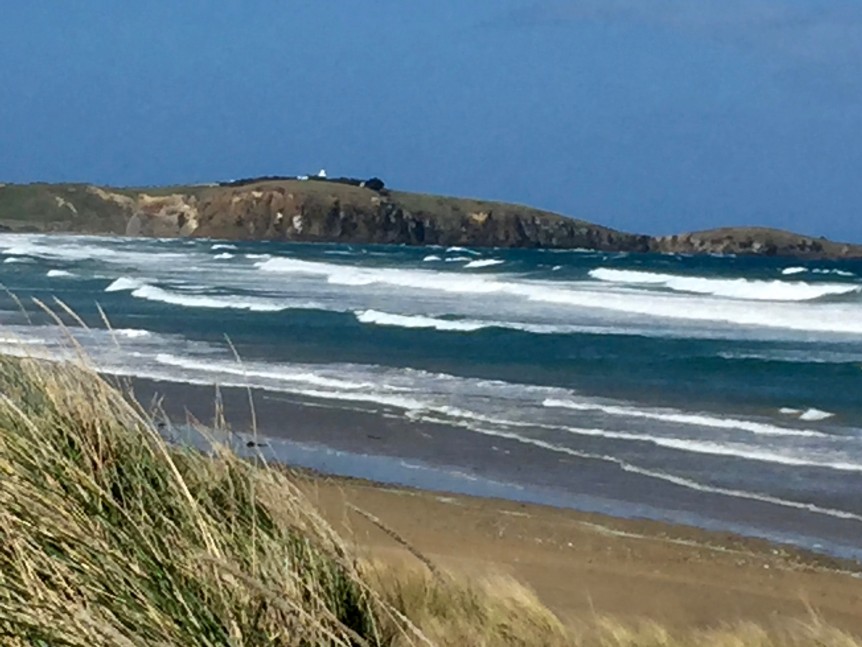 We took the InterIslander Ferry from Wellington to Picton and rented a car to start our road trip. 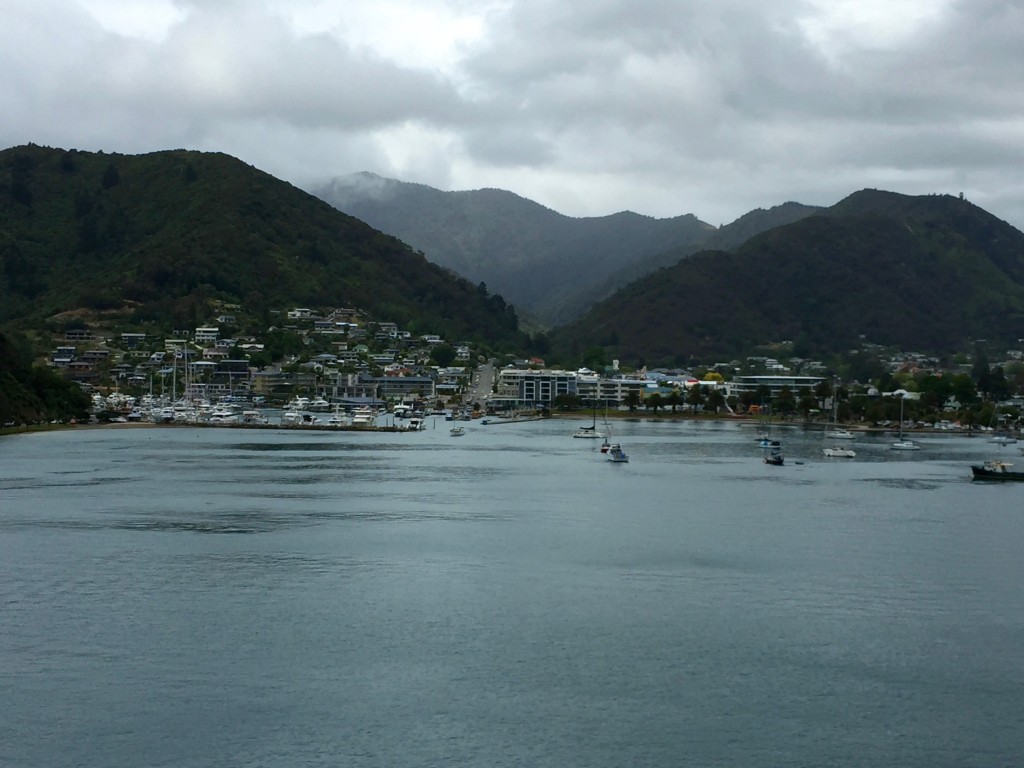 While I try to avoid driving as much as possible, there was no way we could see New Zealand without a car. Driving was interesting in a couple of ways. It was the first time I was going to drive in four months and in New Zealand they drive on the left side of the road. I almost got us killed only three times (okay I exaggerate a bit), and it is helpful to have someone in the passenger seat screaming “wrong side!” when you forget yourself — especially a problem for me (and as it turns out for many others) when I was making turns. On the other hand, the one-way bridges on the South Island became kind of fun, once one we got the hang of who had the right of way.

The first part of our trip was down the East Coast of the South Island and the cities along it.

We drove from Picton down the magnificent coastline to Christchurch. Being from Northern California, I had seen some pretty striking coastlines — but this one was equal to any I have seen, and at (many) times a step above. 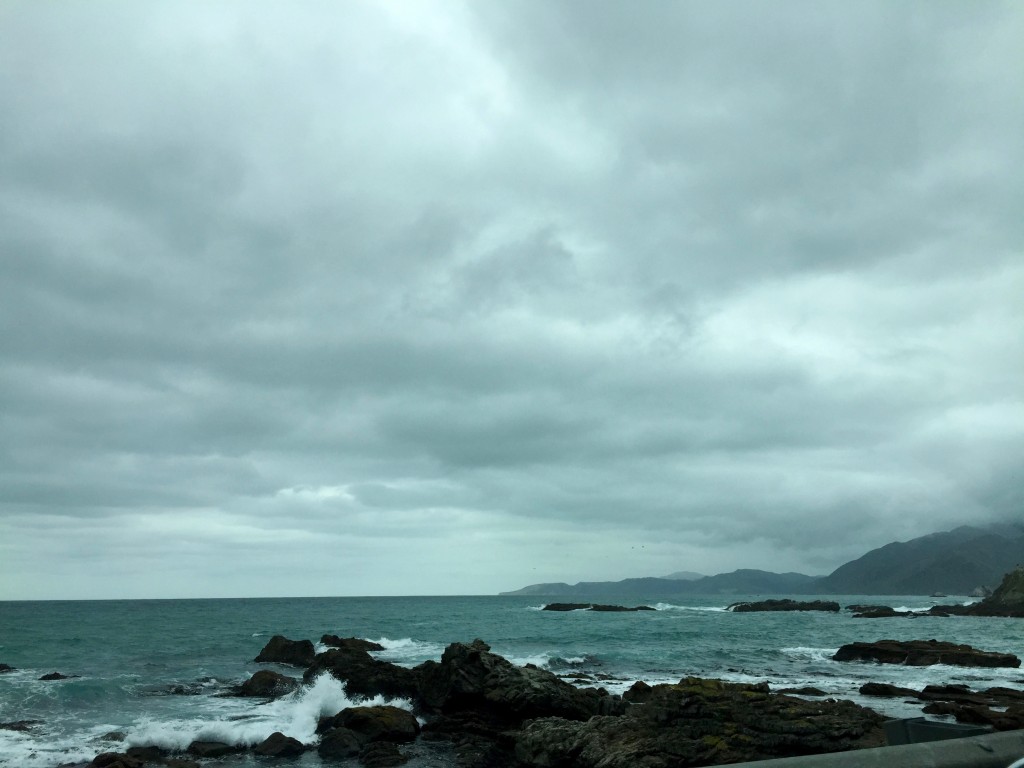 Along the East Coast

Along the way I climbed alongside the Ohau Stream to a small waterfall where I saw seal pups swimming in the waterfall pool. For some reason it seems like many of my interesting climbs involve getting wet, and this one was in the rain again. 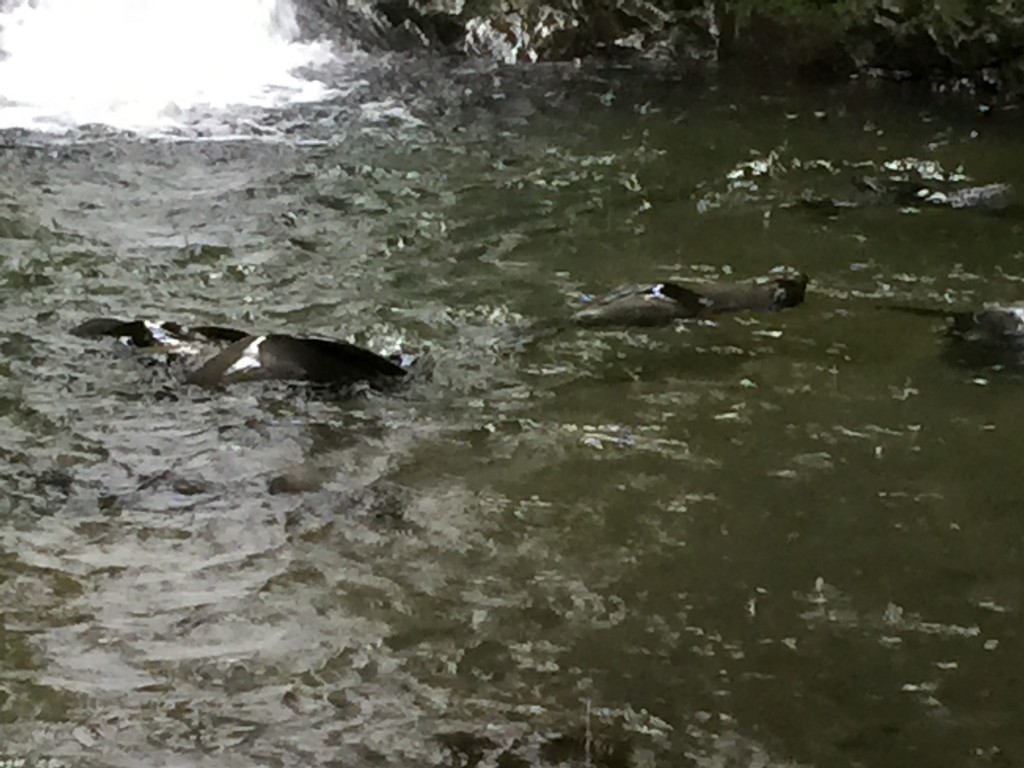 I was just as wet as they were

It was then on to Christchurch.

I’ve spent most of my life in California, and been through a few earthquakes — the most memorable one being the 1989 6.9 magnitude Loma Prieta earthquake. I remember the collapse of a 50-foot section of the San Francisco–Oakland Bay Bridge and the Cypress Street Viaduct on the Nimitz Freeway (Interstate 880), where the upper level of a double-deck portion of the freeway collapsed, crushing the cars on the lower deck. There were 63 deaths, and it took months and years to recover from the earthquake.

But this didn’t prepare me for what I saw and learned about the Christchurch earthquake.

The “main event” was a magnitude 7.1 earthquake on September 4, 2010. While there was widespread damage from that earthquake, the real killer was a smaller magnitude 6.3 earthquake (aftershock) on February 22, 2011, five months later. 185 people were killed and a large part of Christchurch, which had already been weakened by the September earthquake, was severely damaged or destroyed. For you geology geeks, (and I must admit I’m becoming a minor one), there was simultaneous vertical and horizontal ground movement that made it almost impossible for buildings to survive. Severe liquefaction undermined foundations and destroyed infrastructure — 80% of the water and sewage system was severely damaged. This goes to show you that in earthquakes, size is not the only factor.

Given the unprecedented scale of the disaster, the central government decided that Christchurch needed a central city redevelopment plan first, which, to add insult to injury, significantly delayed any rebuilding.

When we got there we found a city that was still pretty much devastated, but with a lot of work going on, and some innovative responses to the disaster.

The Re:START (shipping) container mall was a brilliant move. It started with 27 businesses when it opened in October 2011, and by the time we got there, there were more than 50 businesses inside these very nicely remodeled containers, along with market stalls and street performers. 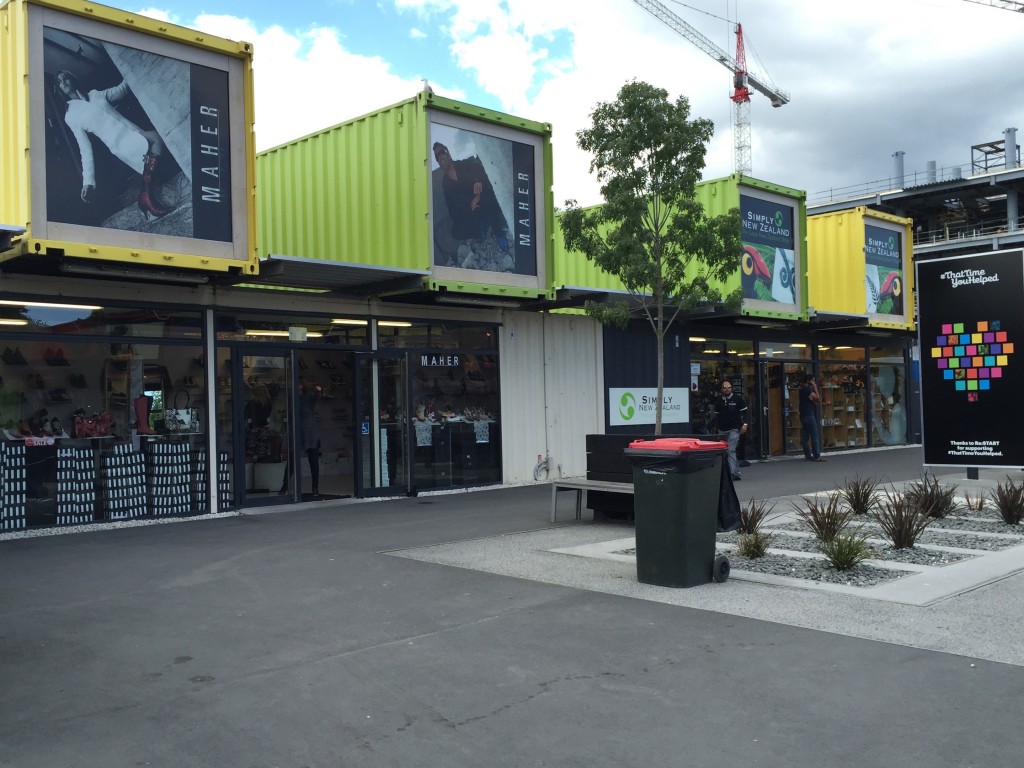 Amazing what can be done with shipping containers

In Christchurch’s central square the neo-Gothic ChristChurch Cathedral’s spire and part of its tower were destroyed, and the structure of the remaining building was severely damaged. 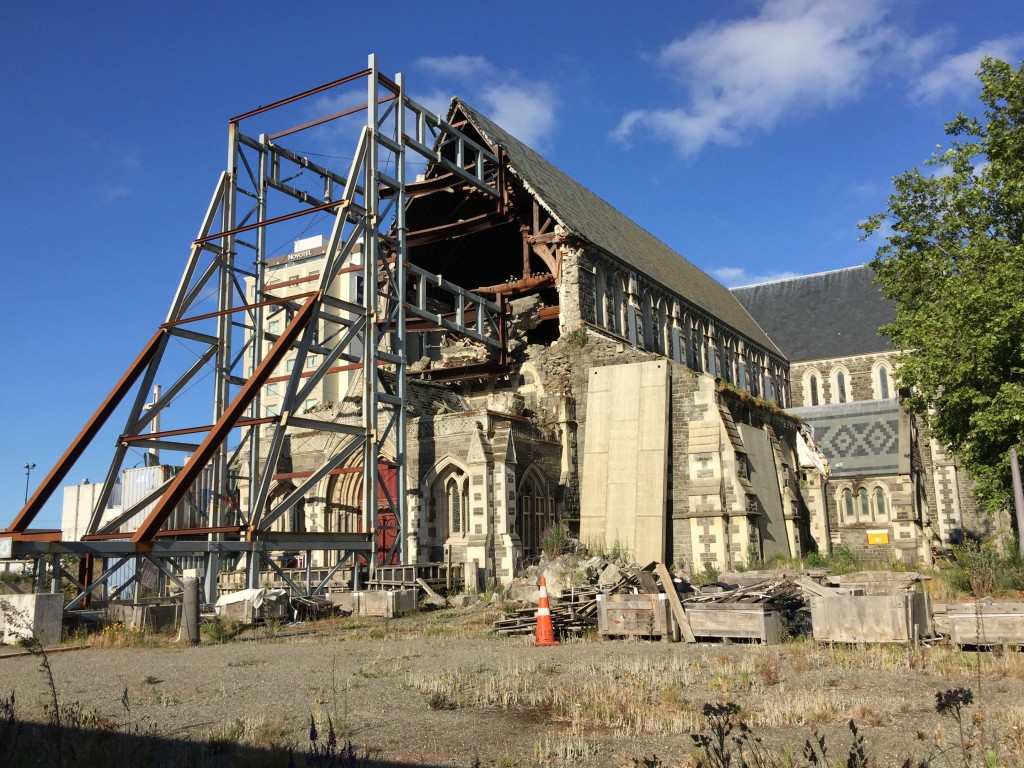 Since August 15, 2013, the congregation has worshiped at the Cardboard Cathedral, designed by Japanese architect Shigeru Ban, known for his innovative work in designing buildings that can be quickly and efficiently constructed. The Cardboard Cathedral was built with paper tubes, shipping containers, and a lightweight skin. 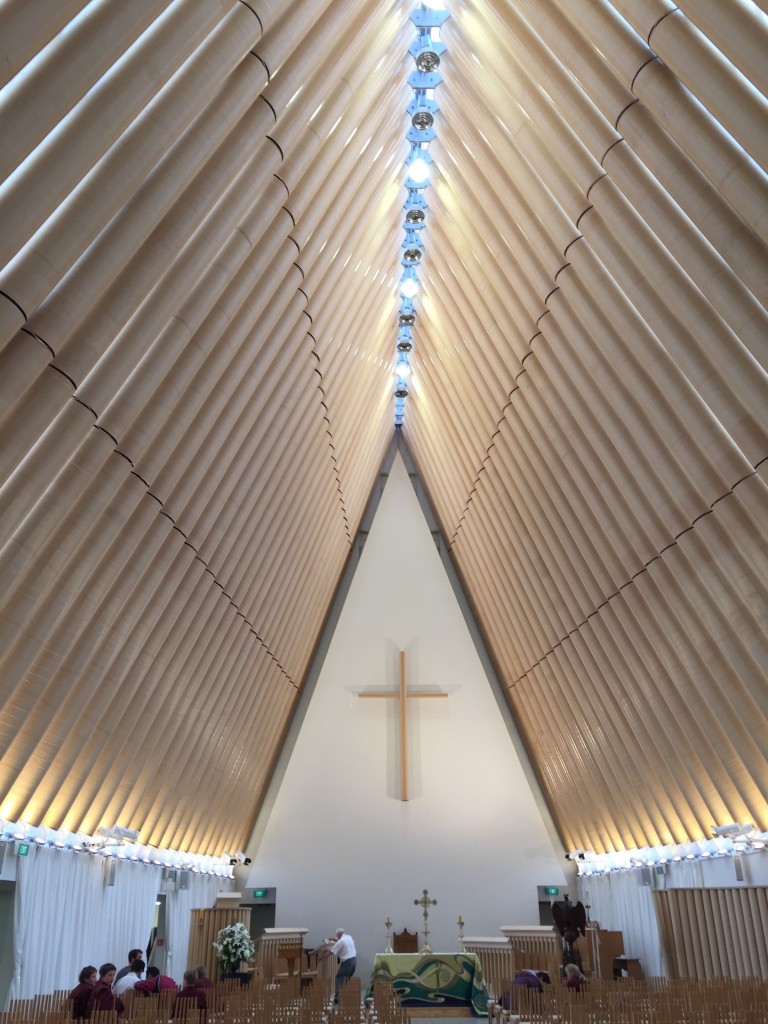 Inside the Cardboard Cathedral

The initial plan was to complete the building in time to mark the first anniversary of the quake, but because of tricky ground conditions and construction delays, the building took more than two years to complete. Nevertheless, Ban’s building was the first major “civic” building completed in the city as part of the rebuilding efforts. It was initially intended to be temporary, but once the cathedral congregation eventually returns to their building in the square, it will become the permanent church of the Anglican parish on whose land it is built.

But when that will be is still uncertain. The Anglican Church wants to demolish the building and replace it with a new structure — but various groups have opposed the Church’s intentions with actions that included taking the case to court. Finally, in September 2015, the church agreed to bring in an independent Government-appointed consultant to negotiate the future of the Cathedral.

Christchurch is moving on, but the condition of the center of the city is a constant reminder of the devastation that the earthquake caused, and so is the especially poignant “185 Empty White Chairs” memorial to the earthquake victims of 2010 and 2011. 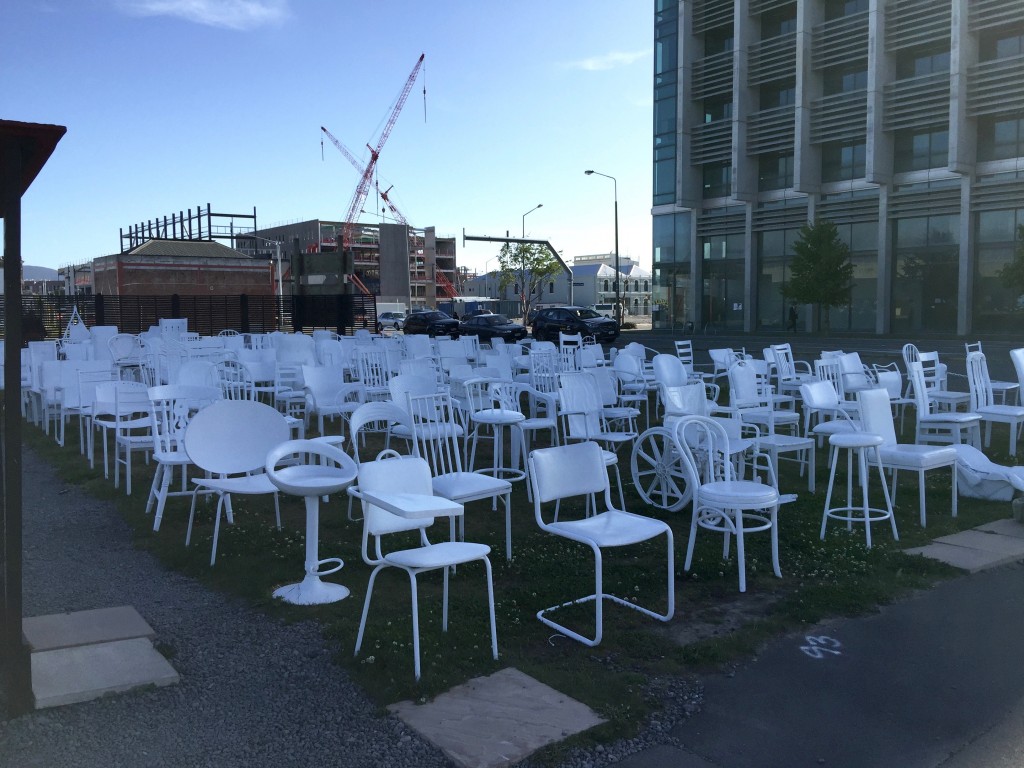 It was a very moving memorial

But Christchurch is still a beautiful place. The views of Christchurch and Lyttelton Harbor are breathtaking, and the botanic gardens were enchanting. Linda always jokes that I fall in love with every place we visit, and Christchurch was no exception. One particularly beautiful day I told her I could live there — and she just laughed.

We then drove to Dunedin, a lovely city, and very Scottish (Dunedin being the Scottish Gaelic name for Edinburgh). There was a lot of traffic getting to our Airbnb in the city because of a Fleetwood Mac (can you imagine) concert

The city itself has quite a few old historic buildings and a very useful self-guided walking tour. There is also a Street Art Trail, with a map and walking tour (and an article and our photos as well). 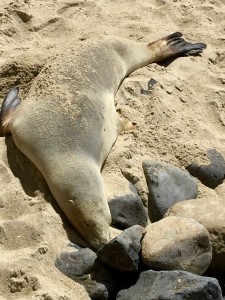 The guardian of the beach

But it was the scenery that was special. The view from Larnach Castle and the garden itself was spectacular, as was Tunnel Beach. It was a “usual” amazing coastline beach with a unique twist —a tunnel down to the beach that a local politician had commissioned for his family in the 1870s. 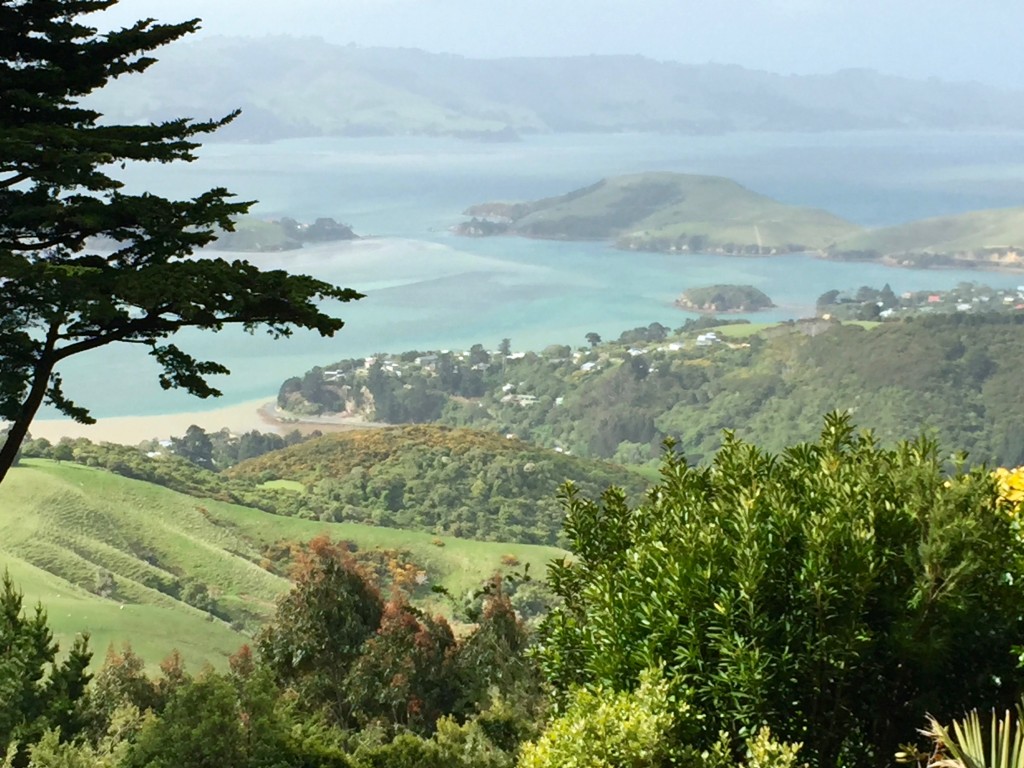 The view from Larnach Castle 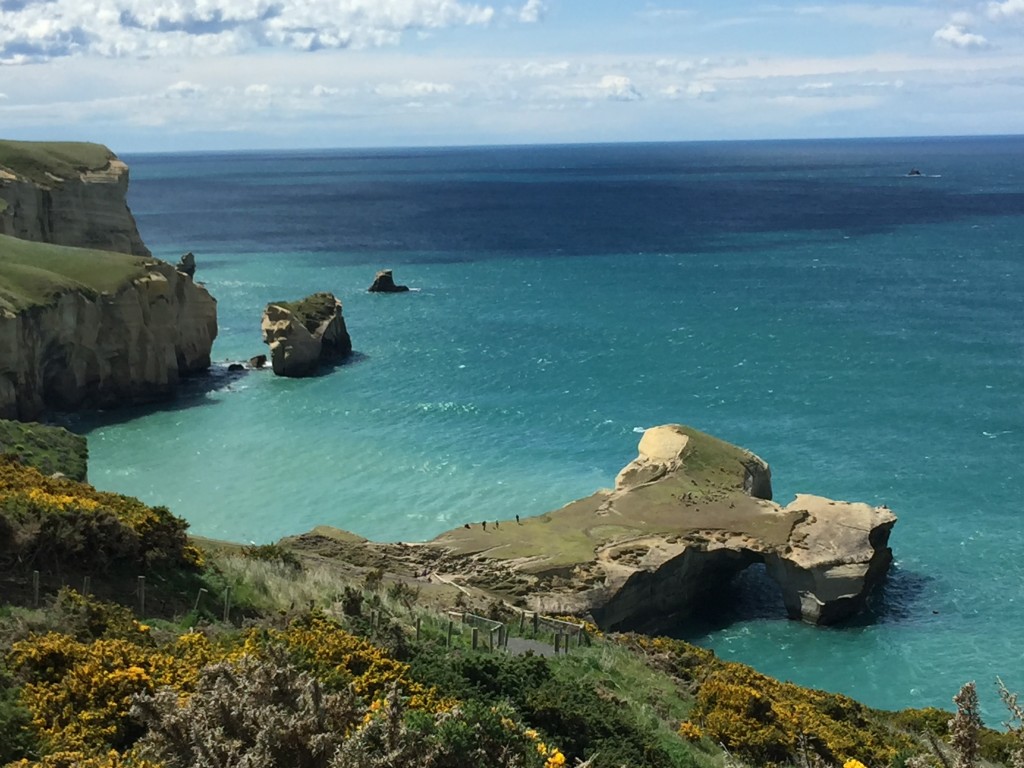 The view on the hike down to Tunnel Beach 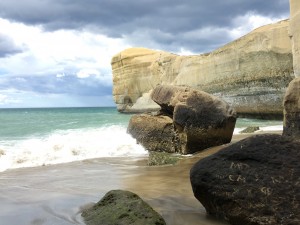 Dunedin was a delightful stop along the way to one of those don’t-miss-it places in New Zealand — Milford Sound.