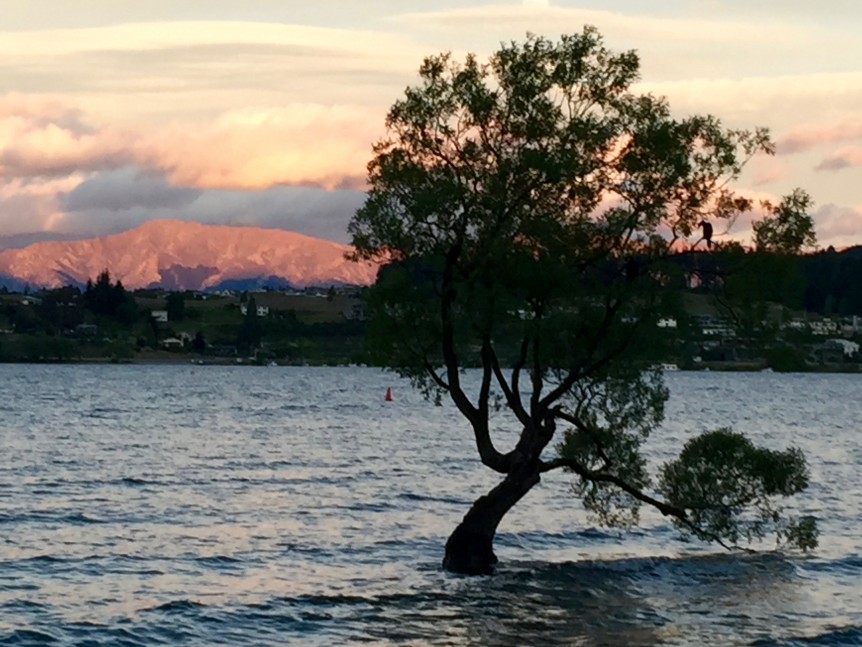 Our road trip in the South Island was a non-stop experience of spectacular scenery. Linda put it perfectly when she said, “Every new mountain, every new beach, every new green valley, and every new lake is even more beautiful than the last.” And along the way we also found a few towns where we had delightful visits.

It was raining when we got to Milford Sound and we were prepared to be disappointed. We had taken a bus “tour” to the Milford Sound harbor where we would then cruise the sound. Yet anyone who had anything to do with the tour, from the bus driver to the people who worked on the boat, said it was going to be as spectacular in the rain, and in a special way, perhaps even more so than if it were sunny. In the rain, they all said, you get to see hundreds of waterfalls that aren’t there when it isn’t raining. I don’t know if what they were saying was marketing hype or public relations, but (rationalization may have played a role here), it was indeed spectacular in the rain. Nevertheless, I told Linda, despite our agreement not to revisit places we had already been on this trip, I was coming back here and camping out until we got a sunny day. But since it rains here 200 days a year, and five days without rain is considered a drought, it does present a challenge. 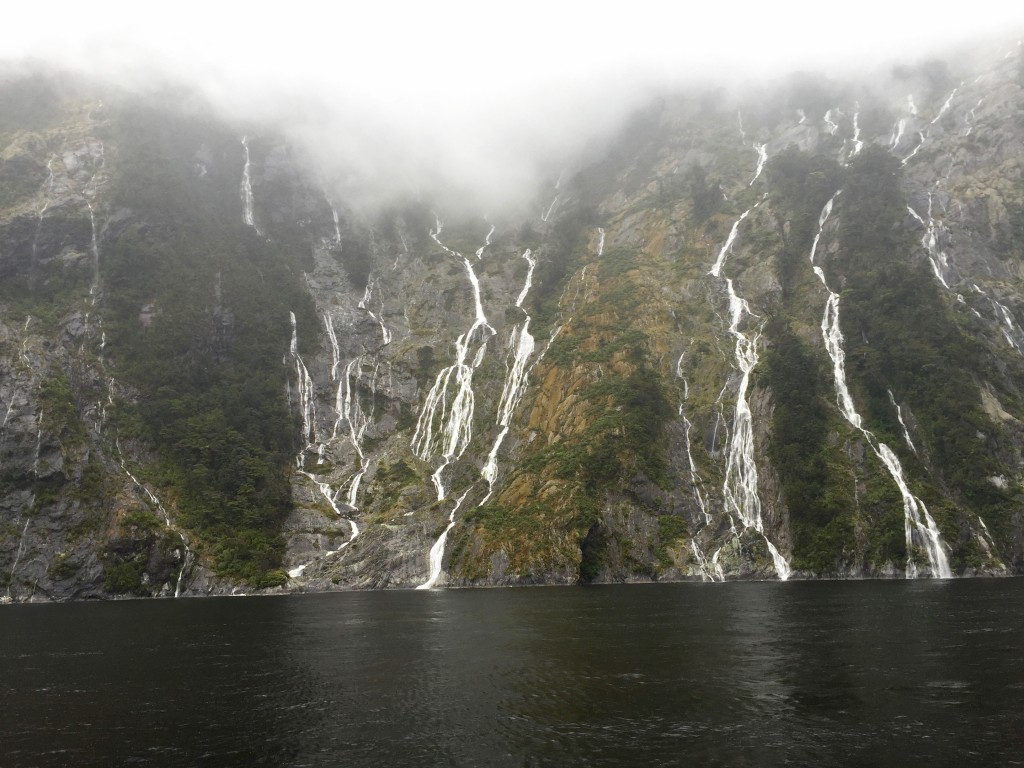 Yes, the waterfalls were beautiful

We also found out from the locals, that while Milford Sound is what you see in all the magazines and guidebooks, Doubtful Sound is just as spectacular, and we added it to our list of places to explore when we return to New Zealand.

We opted for a boat tour and bus ride from Te Anau, the closest town to Milford Sound because all websites and all the visitor information brochures warn against driving on your own. But while it is nice to have someone else do the driving, and the commentary by the driver along the way was interesting, the road is quite good and not as treacherous as the tourist brochures (and tour companies) make it out to be.

Te Anau is on Lake Te Anau, and there is not much to Te Anau the town, but the lake was beautiful. While I have never really been a lake person (crashing waves and raging rivers are more my style), Lake Te Anau, surrounded by mountains, converted me. 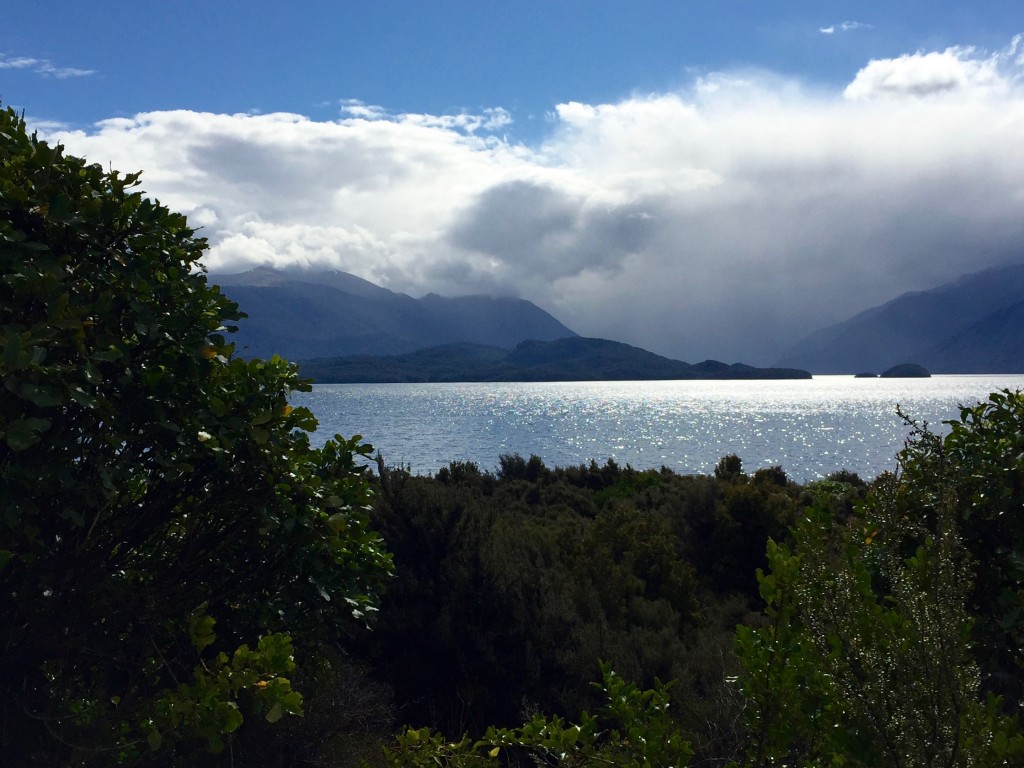 One of the most heavily promoted “must see” places on the South Island is Queenstown on Lake Wakatipu. Yet everyone we met who lived in New Zealand told us to skip Queenstown — way too touristy and not much there unless you are really into adventure sports (not an option in still chilly November), and even then, better in the winter for skiing. They were right about the town itself, but the view of Queenstown and the surrounding area from the top of the gondola ride was breathtaking. 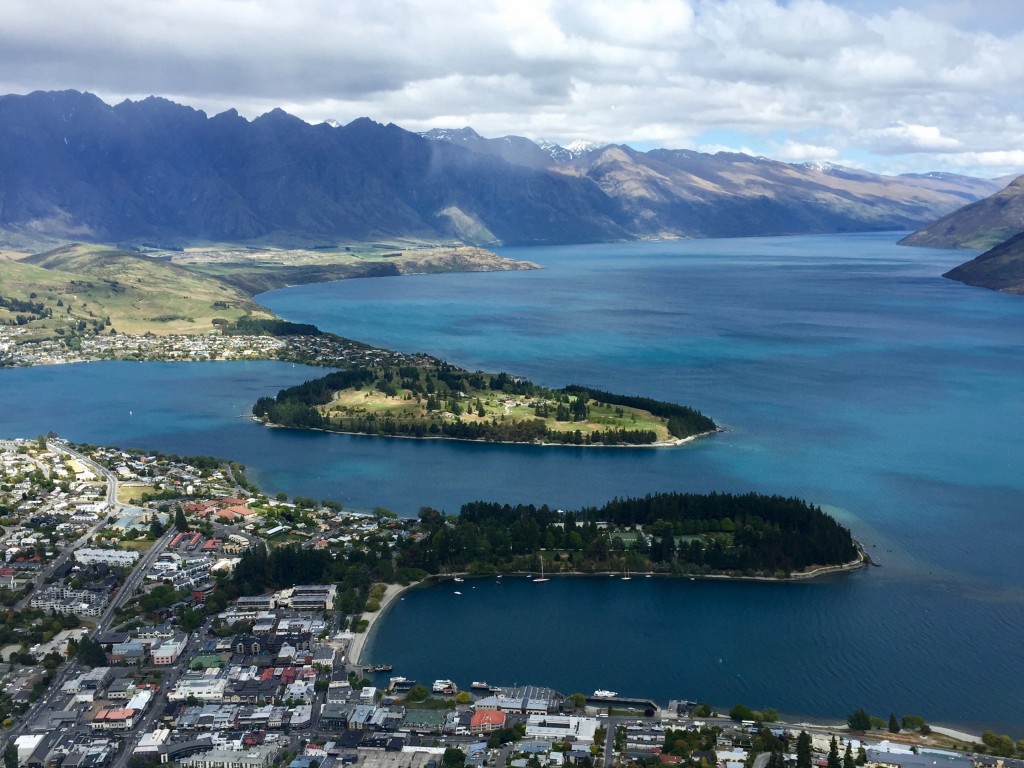 Queenstown from the top of the Gondola

What we also did discover (on a slight two-hour detour from our drive to Lake Wanaka) was Glenorchy. Parts of the Lord of the Rings movies were filmed there, and the scenery is striking. It was pretty windy when we got there, so we didn’t explore the high country, but the mountains surrounding the lake were magnificent. 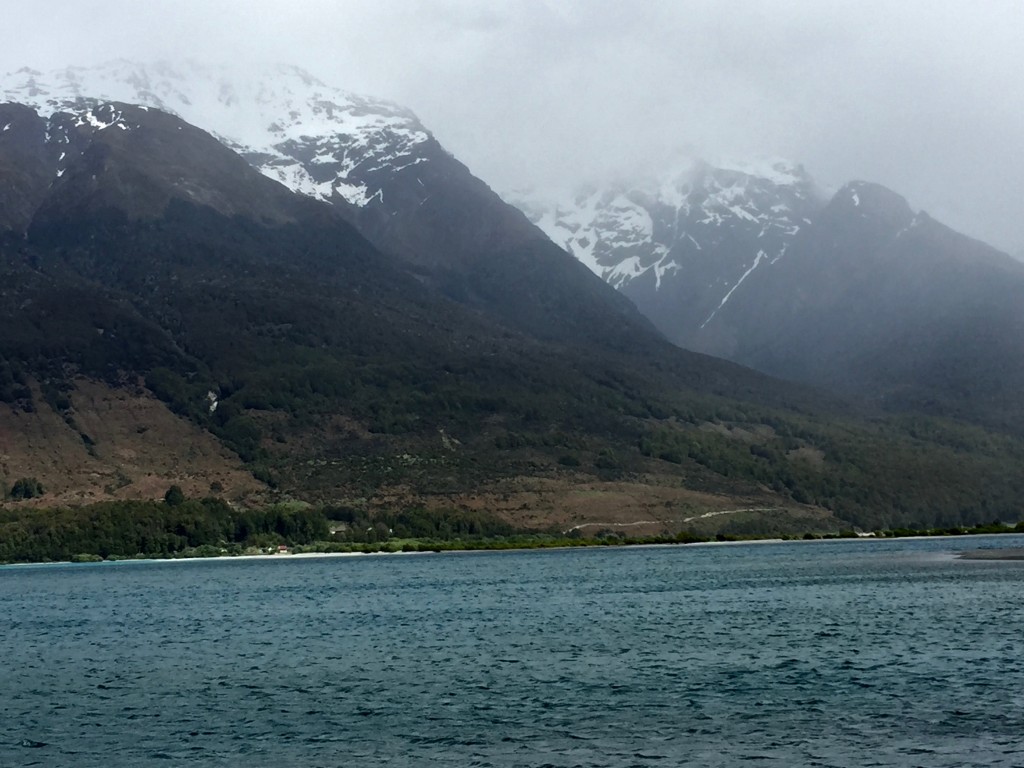 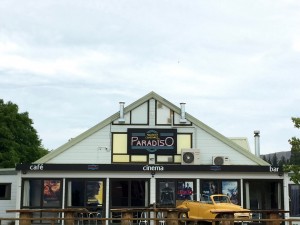 Lake Wanaka, we found, was more beautiful than Lake Wakatipu and Wanaka was much more appealing to us than Queenstown. It was a quaint town, and we even got to the movies for the first time in nine months — we sat through a double bill, Legend and The Hunger Games. The Paradiso is a funky theater and cafe were you could have dinner in between (or even during) the shows.

We also did a great hike to the top of Mt. Iron with its breathtaking (I use that word a lot in describing the New Zealand landscape, but it is the most accurate description of our experience) 360-degree view of the valley, lake, mountains, and town. 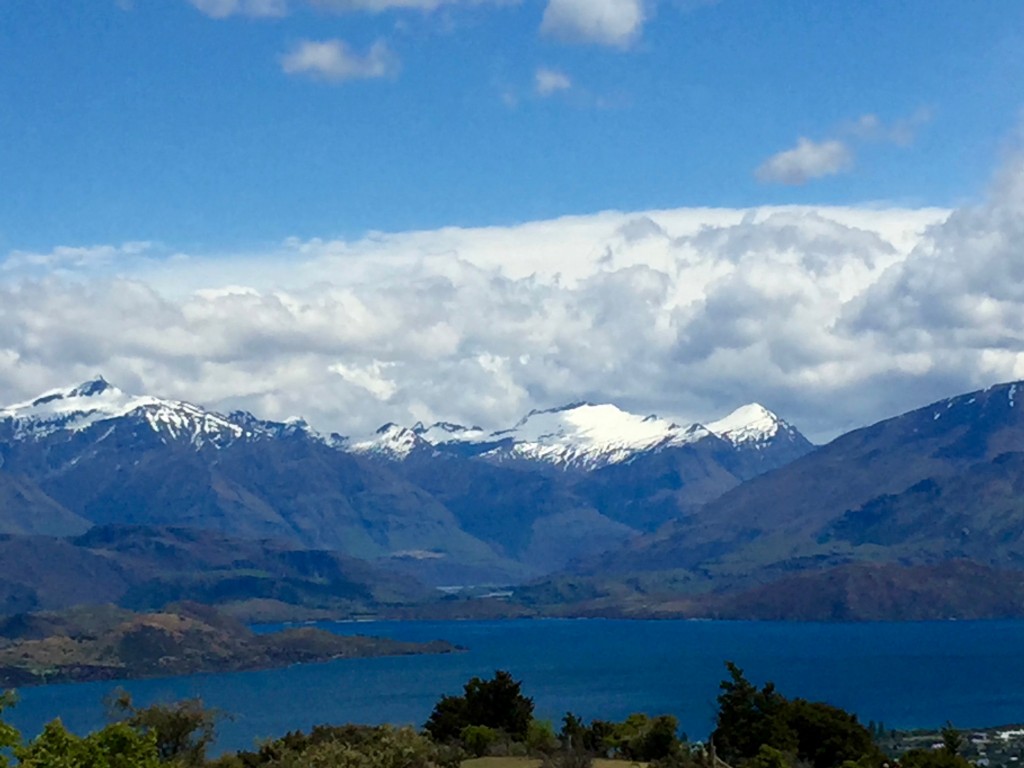 Aside from lakes, New Zealand has big mountains with glaciers — Franz Josef Glacier and Fox Glacier. We got to Fox Glacier in late afternoon, and to one of few disappointing experiences in New Zealand. Fox Glacier has been retreating hundreds of meters a year, and what we could see, even after hiking to the lookout, was very disappointing, especially comparing that to our experience on the glaciers in Alaska. We had thought about taking a helicopter to the top of the glacier and doing some hiking, but there had been a helicopter accident a couple of days before because of the wind, which was still pretty gusty, so discretion became the better part of valor, and we decided against it. The next day was a rain day (fortunately the only real one during our time in New Zealand), and we never did get to Franz Josef Glacier — the valley floor was flooded — although what we learned from people we met was it too was as disappointing, as Fox Glacier. 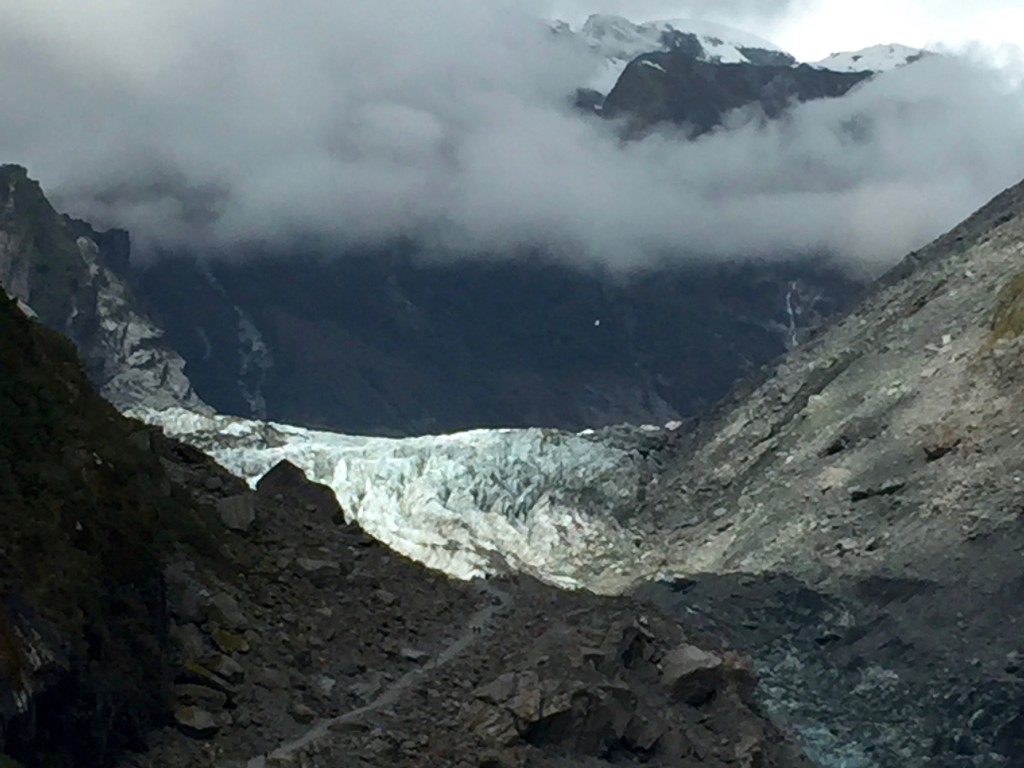 We had found out about the Pancake Rocks when we were in Queenstown. We were sitting at a more than two person booth in a coffee shop when a couple of women asked if they could squeeze in and share our table. Linda said laughingly “sure, as long as there aren’t eight of you.”The next thing we knew there were eight of them, really squeezed in (it was a bit cozy), all of whom had just gotten off a trek . We told them about our trip, and that we were going to stop in Greymouth overnight to break up the drive along the west coast from Franz Josef to Picton to drop off our car before exploring the North Island. Two of the women who were from New Zealand told us we that we absolutely had to go to the Pancake Rocks. So we did. 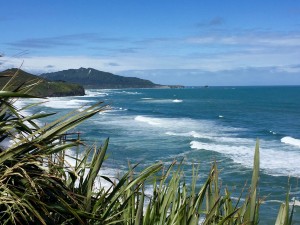 On the way to Pancake Rocks

They were 44 winding kilometers past Greymouth and worth every kilometer. We had spectacular views along the way, and when we got there we saw great rock formations, crashing waves, and bright blue sky. We ended up spending several hours there, but as we left to go back to Greymouth it started to cloud up, and while still beautiful, it did loose a little of its edge. 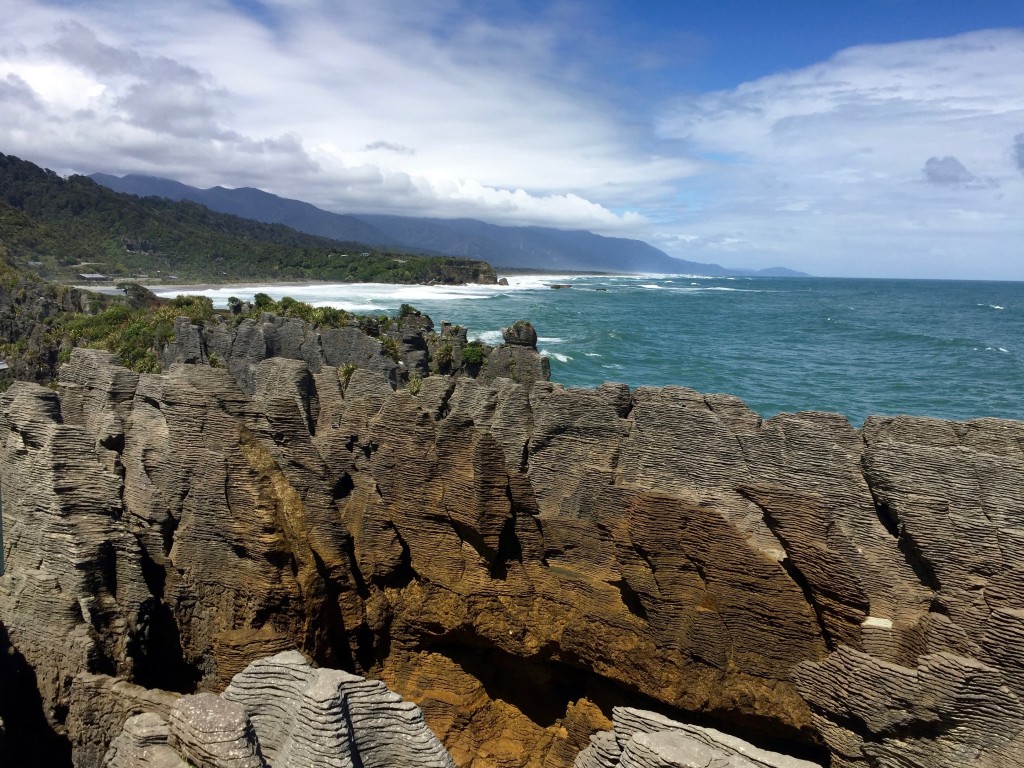 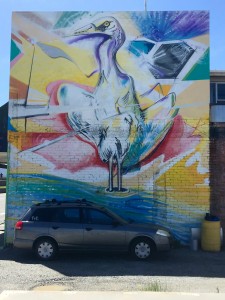 The best of Greymouth

We had expected I-don’t-know-what in Greymouth, but whatever it was we didn’t find it. What we did find was a B&B whose owner (an older woman) told us great stories about her life in New Zealand and where we met a wonderful young woman named Sarah (a name dear to our hearts), a doctor from Berlin, traveling on her own with whom we spent several lovely hours, and are still in touch with.

The next morning we drove to Picton (our new friend took the KiwiRail TranzAlpine train from Greymouth to Christchurch, one of the great train trips in the world, which she said was magnificent), and dropped off the car.

The day after we took the early morning Bluebridge Ferry (there are two competing ferry companies — we had taken the Interislander Ferry to the South Island) from Picton to Wellington where we picked up another car and drove to Napier to begin the North Island part of our road trip. We didn’t have too much time left, but we wanted to see Napier, an art deco town, and the geothermal region of the North Island, which you’ll find out about in our next post. 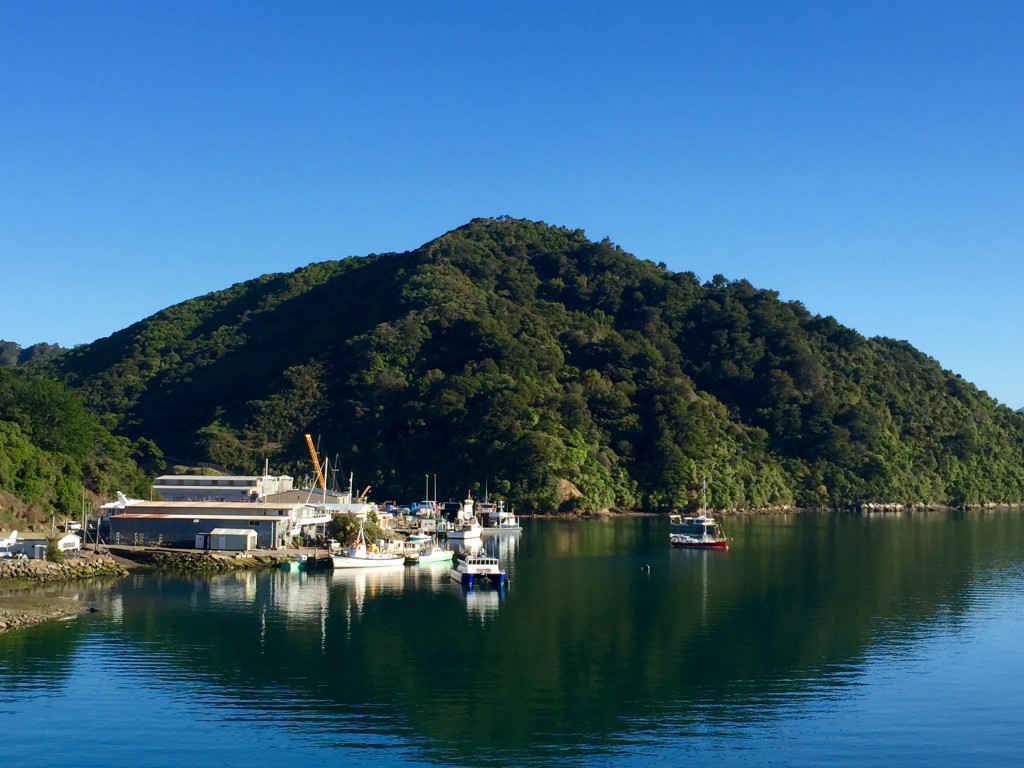 Picton in the early morning