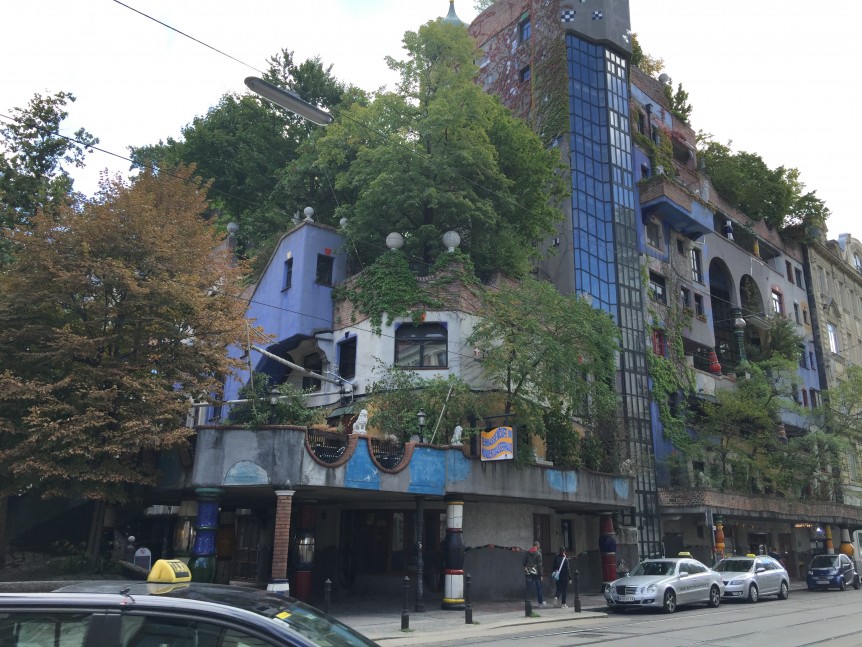 As I was busy navigating us through the highways and byways of turn of the 19th century (the Fin de Siècle) art and architecture in Vienna, Linda was busy making discoveries as well. That’s one of the things we love about the way we travel — can always make room for the unplanned and unexpected.

In Vienna she discovered the artist Friedensreich Hundertwasser. Following the same tradition we saw in Vienna in the early 1900s, he believed that art should be a total experience, and in the early 1950s turned his attention to architecture. 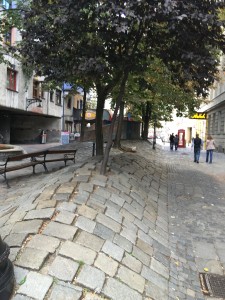 Linda loves Antoni Gaudí, and one of the few places that we have already been to that we want to visit again early on is Barcelona. Since Hundertwasser’s architecture is similar (but different) to that of Gaudí’s in its use of biomorphic forms and the use of tile, we started our adventure at the Hundertwasserhaus — an apartment house owned by the city of Vienna. His apartment building in Vienna has undulating floors (as he said, “an uneven floor is a divine melody to the feet”), an earth and grass covered roof, and large trees growing from inside the rooms, with limbs extending from windows. He believed in, and practiced, an architectural design consistent with nature.

Tenants have what he calls the “Window Right” — a tenant in a rented apartment can do what he or she wants to the exterior building wall within arm’s reach.

A person in a rented apartment must be able to lean out of his window and scrape off the masonry within arm’s reach. And he must be allowed to take a long brush and paint everything outside within arm’s reach. So that it will be visible from afar to everyone in the street that someone lives there who is different from the imprisoned, enslaved, standardised man who lives next door. 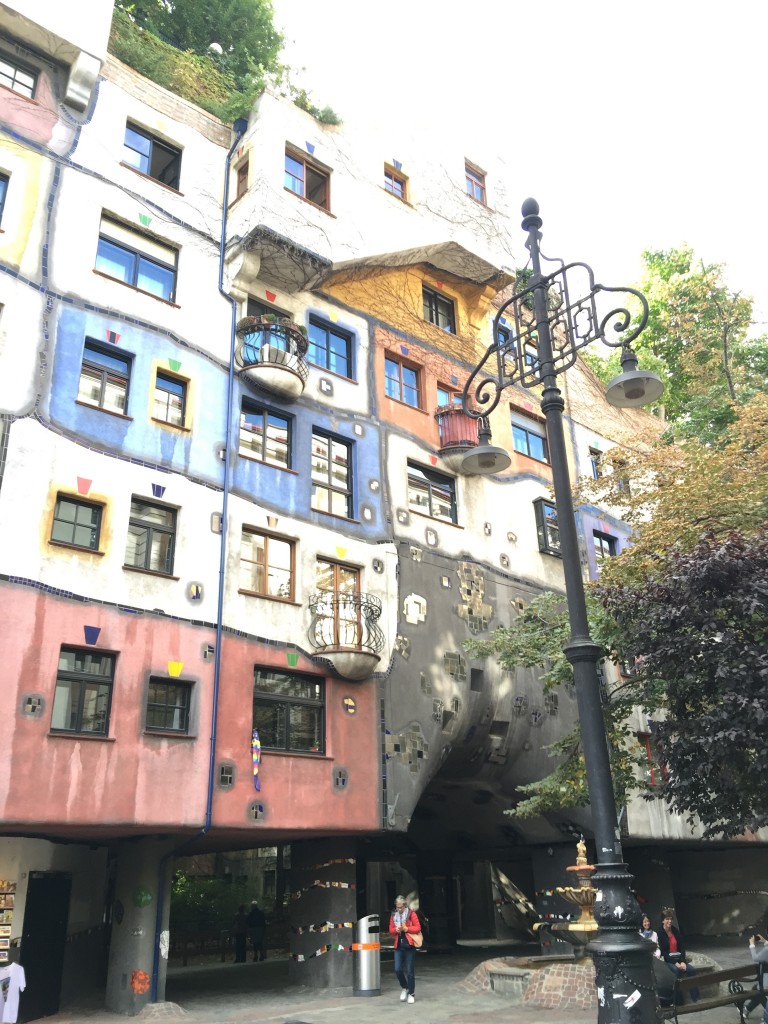 A tenant in Hundertwasserhaus has “window rights”

For Hundertwasser’s, human misery was a result of the rational, sterile, monotonous architecture following the tradition of the Austrian architect Adolf Loos (an interesting partial circle here).

We must at last put a stop to having people move into their quarters like chickens and rabbits into their coops.

— Mould Manifesto against Rationalism in Architecture (1958)

He believed that architecture should not constrain the individual, and that our real illiteracy is our inability to create. Window Right sends a message to everyone in the street that someone lives here who is different from the person who lives next door.

He also believed that planting trees in an urban environment was a duty. We are guests of nature and we should behave as such and restore to nature territories which we have illegally occupied. 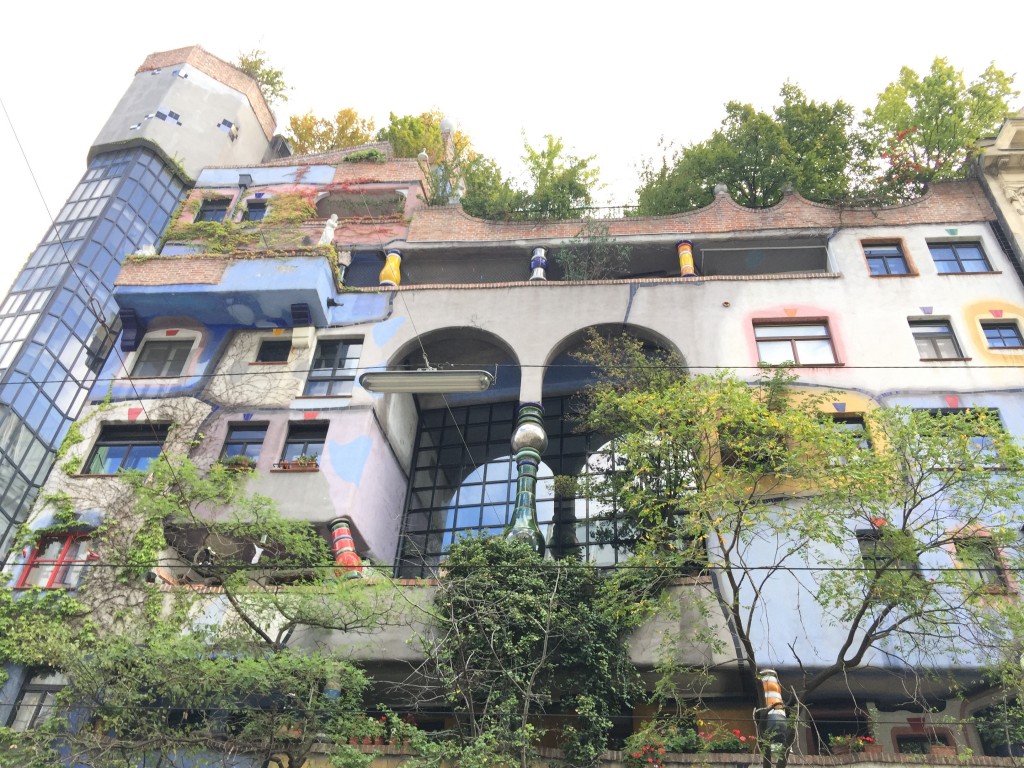 To Hundertwasser a straight line which he calls is “godless and immoral” and “something cowardly drawn with a rule, without thought or feeling” (Mould Manifesto against Rationalism in Architecture) and any form of standardization was an abomination — reflected in the conflict today between the mechanical and organic vs the digital and straight lines.

Linda was so fascinated by his architecture that she even bought a book on his work. That may not seem like a big deal to most people, but we are each traveling with a 27 inch suitcase and a carry-on, and every addition has to be something we cannot live without.

Our next stop was the KunstHausWien Hundertwasser Museum.. 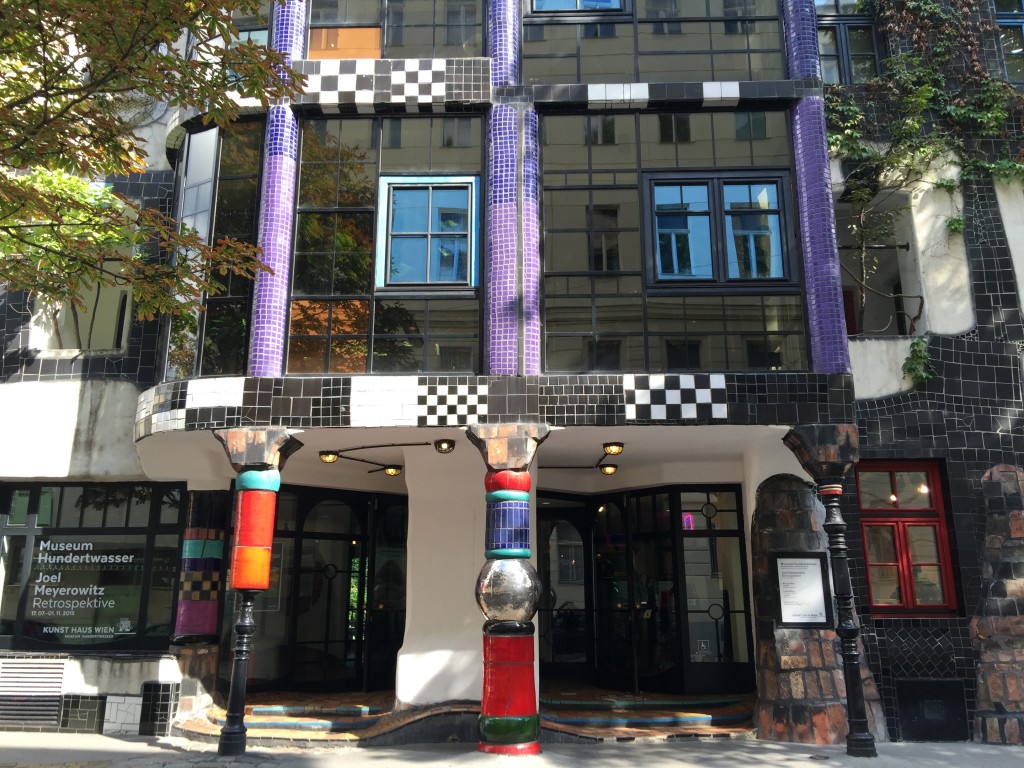 In his paintings he used bright colors with organic forms, and an ongoing theme in many is reconciliation of humans with nature, and a strong individualism. And interestingly enough (there is full circle here) he was also inspired by the art of the Vienna Secession, and by the Austrian painters Egon Schiele and Gustav Klimt (the rest of the full circle).

But it was an architectural model in the museum that led us on a quest on our last day in Vienna — his redesign of the exterior of the Spittelau District Heating Plant. When he was initially asked by Mayor Helmut Zilk of Vienna to redesign the exterior he refused.

But when it was promised that the plant would be equipped with the most modern emission-purification technology and that 60,000 apartments would be heated whose emissions would otherwise be a further source of pollution, and that a metropolis such as Vienna needs a garbage-incinerating plant despite the greatest efforts to avoid garbage (he was opposed in general to a garbage-incinerating plant unless all possibilities were exercised to avoid creating garbage) — Hundertwasser finally agreed to do the design. You can even think of the plant as recycling garbage into heat. 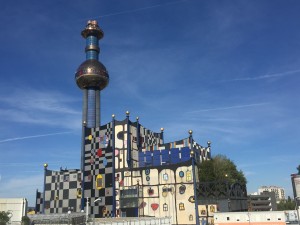 Using public transportation, the plant was not easy to find. We were also running short of time because we needed to catch our night train to Berlin. Finally, after a few missteps, and, using the plant tower as a navigation aid, find it we did, and it was worth all that effort. 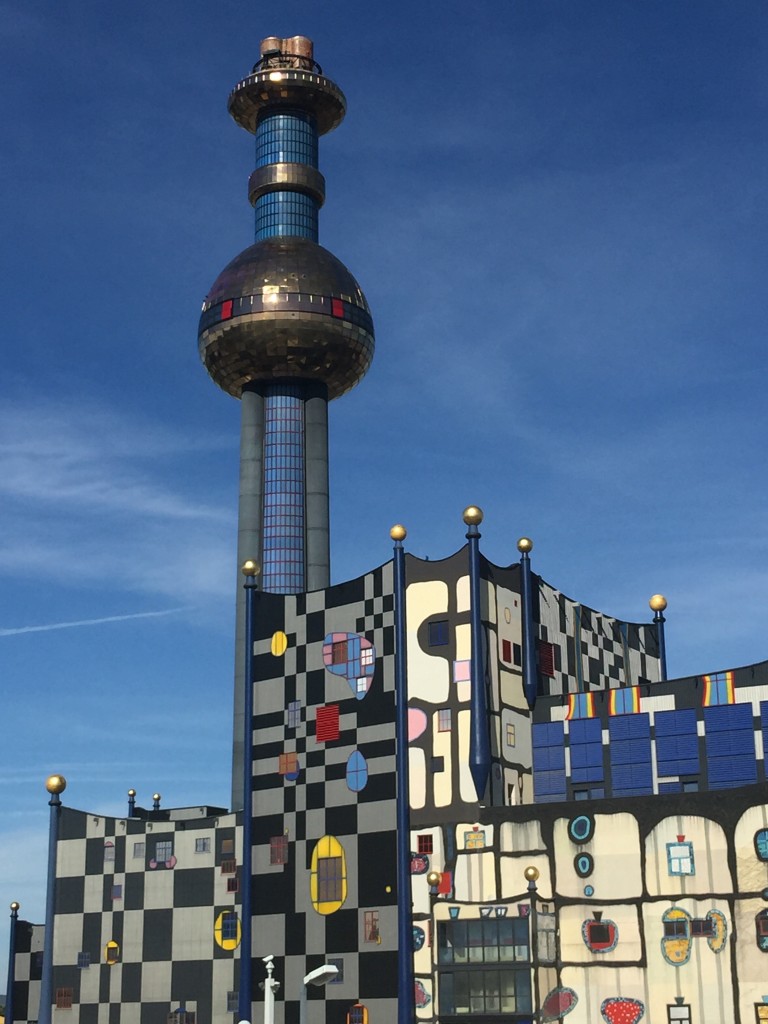 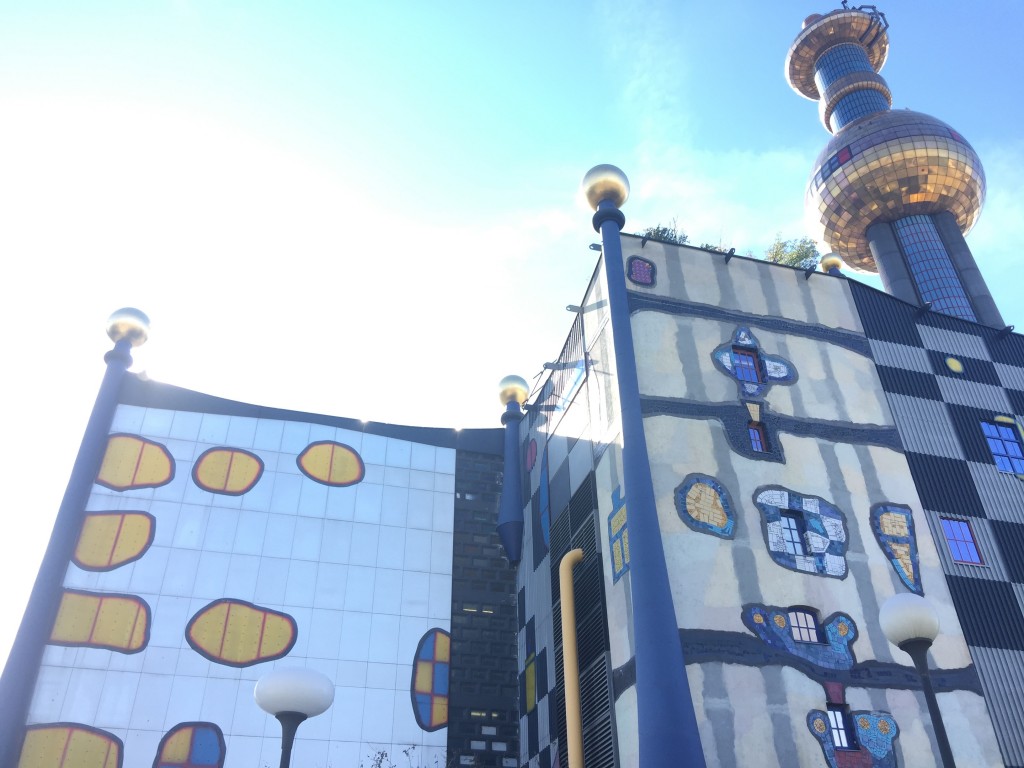 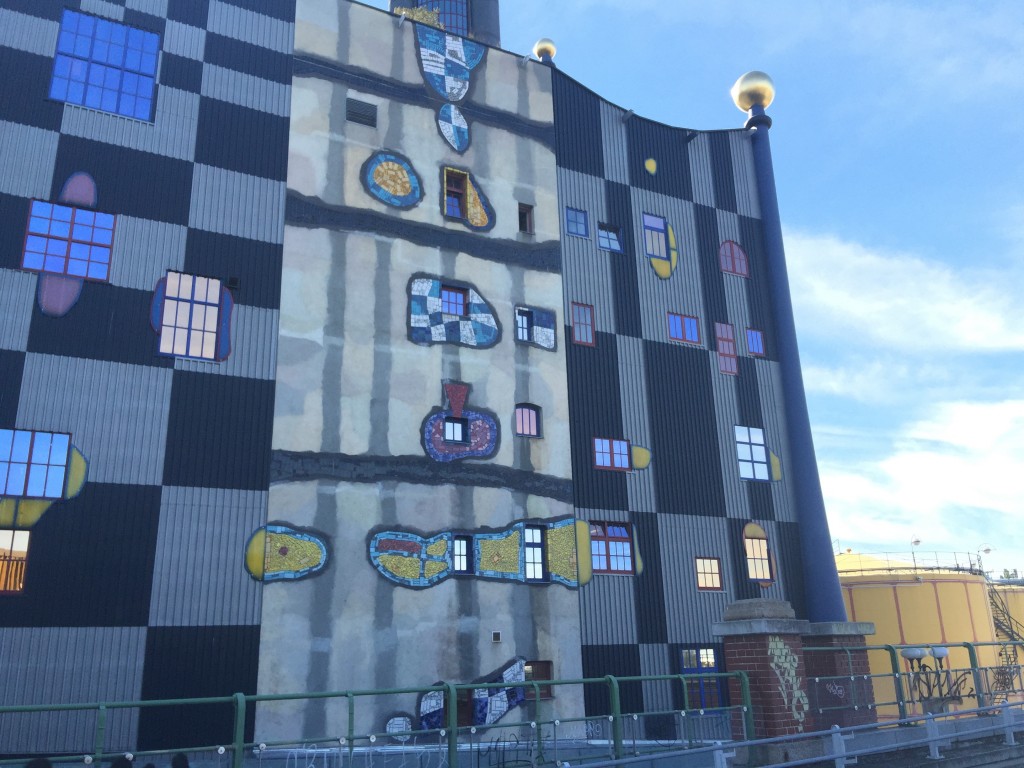 The side of the plant

Hundertwasser died in February 2000. He was buried in a shroud with no coffin, under 60 cm. of earth, with a tree planted on top of his grave, on his New Zealand farm in what he called “the garden of the happy dead”.

We found these words at the entrance to his museum:

I am looking forward
to becoming humus myself
buried naked without coffin
under a beech tree planted by myself
on my land in Ao Tea Roa.

The internment should take place without a coffin, wrapped in a shroud
In a layer of earth at least 60 centimeters thick.
A tree should be planted on top of the grave
to guarantee that the deceased will live
on symbolically as well as in reality.

A dead person Is entitled to reincarnation In the form of,
for example, a tree that grows on top of him and through him.
The result would be a sacred forest of living dead.
A garden of the happy dead.

In the museum there were several other quotes of his I really liked, among them:

If we do not honor our past we lose our future.
If we destroy our roots we cannot grow.

When we dream alone it is only a dream, but when many dream together it is the beginning of a new reality.