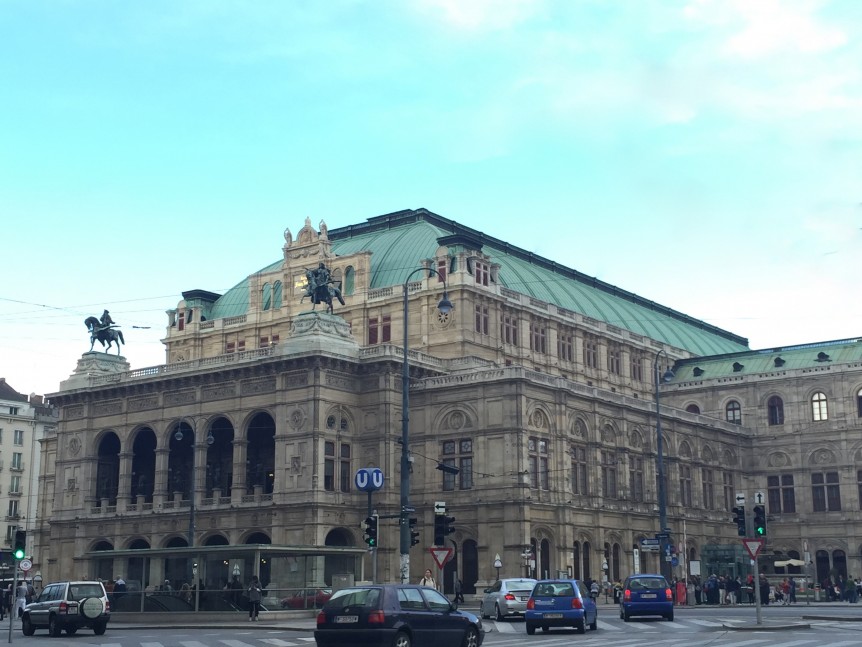 After some adventures that had us wondering if we would ever get there, we finally made it to Vienna. I wasn’t sure exactly what to expect, and I couldn’t even remember why we were going to Vienna except that we were “in the neighborhood” and a friend of our son’s who lives there said she loves it.

One thing I had expected to find though, was a conservative and somewhat uptight city. And in fact, in the middle of the 19th century that was true. But by the turn of the 19th century (the Fin de Siècle), Vienna had become one of the most creative cities in the world.

The Ringstraße was our introduction to Vienna — a 5.3 kilometer long circular road that started in 1857 to replace the city walls and moats. The buildings are monumental.and on a scale that makes you understand your individual insignificance. And that was the point. The Ringstraße was to be a showcase for the grandeur and glory of the Habsburg Empire. The Museum of Art History on the Ringstraße for example, is one of two identical buildings facing each other, the other being  the Museum of Natural History. 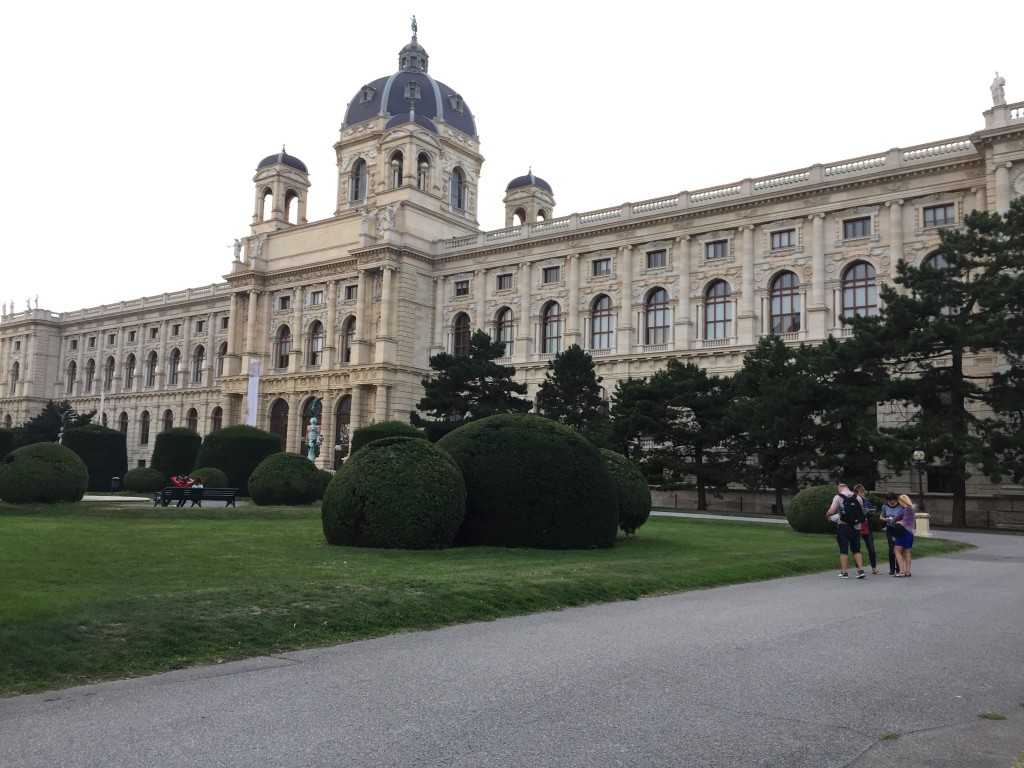 Museum of Art History on the Ringstraße

The style of the the architecture is eclectic, or more precisely the pluralism of styles known as Historicism — or, more accurately, an acknowledgment that we have nothing new, so we’ll go with the tried and true.  There is the Neo-Renaissance style Museum of Fine Arts and the Natural History Museum, the Neo-Renaissance State Opera, and the Flemish Gothic Parliament and City Hall, and a lot more. But as magnificent as the buildings were, and still are, they symbolize an attitude towards the arts of a society happy enough in recycling classical styles rather than embracing anything new. And this was the case for art as well, with the major institutions embracing the prevalent naturalism of academic painting.

But around the turn of the nineteenth century things began to change, and soon the established art institutions, its historicism and naturalism in academic painting, (not to mention the Hapsburg Empire), would be only of interest to historians. In April 1897, (just as in 1874, when a group of artists called the Anonymous Society of Painters, Sculptors, Printmakers, etc. organized an exhibition in Paris that launched the movement called Impressionism), a group of artists and architects, led by Gustov Klimt, seceded from the established institutions (the Viennese Secession).

In turn of the century Vienna you would find not only the Secession style, but also Jugendstil (the Viennese version of Art Nouveau), Expressionism, and the beginning of Modernism. The dynamic between the old and new styles created a tension that added to the excitement (and still does today), and was further fueled by intellectuals and writers (Freud published his first writings in Vienna). Here was iconoclasm at its finest.

This story fascinated us and we spent most of our time in Vienna exploring the 1900s.

At first we were intrigued by the painters, especially the Secessionist Gustav Klimt and the Expressionist Egon Schiele. We found their work in two places. The first was the Leopold Museum’s “Vienna 1900” exhibit. They have some Klimt masterpieces and the world’s largest Egon Schiele collection. The Leopold’s exhibit also unfolded more of the story of 1900 Vienna — from painting to architecture to the decorative arts and even to the design and manufacturing of  the objects of daily life — your coffee service for example — as objets d’art. 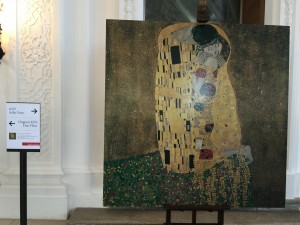 Yes, you can take a selfie in front of (a reproductioin of) The Kiss

Then there was The National Gallery at Belvedere Palace. At the Upper Belvedere you’ll find more Klimt and Schiele, curated to show the difference between two artistic perspectives of the world — the Viennese Secessionists (such as Klimt) and the Expressionists (such as Schiele). We really liked the Belvedere Palace exhibition, and the palace and its grounds are well worth a visit for themselves. The Gallery’s key piece is Gustav Klimt’s “The Kiss”. “No photographs please”, but there is a reproduction  of “The Kiss” in the lobby for the “selfie” crowd. 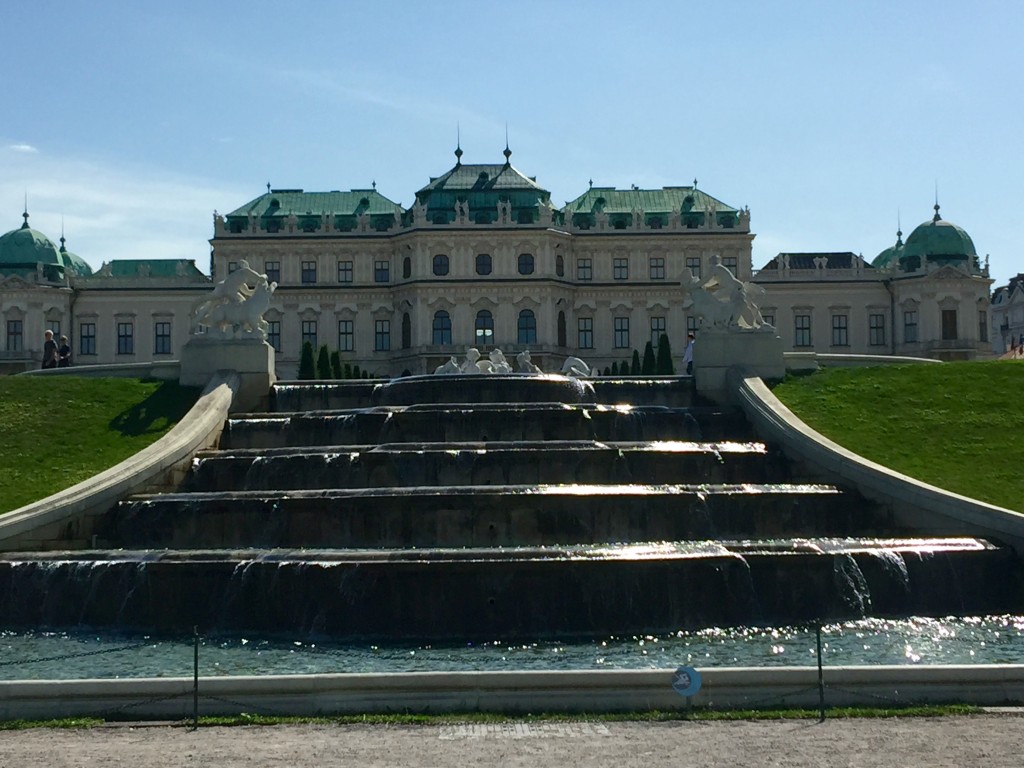 By the time we were done, I had developed a better appreciation for Klimt, a new found appreciation of Schiele (especially his cityscapes), and a liking of the Expressionist Oskar Kokoschka.

But what really got us jazzed was the architecture, a lot of which we would be able to see in present day Vienna.

The Secession Building, the group’s exhibition house, and an icon of the movement, was built in 1897 by Joseph Maria Olbrich as an architectural manifesto for the Vienna Secession. Under the motto of the Secessionist movement above the entrance of the pavilion: “To every age its art, to every art its freedom” is a sculpture of three gorgons representing painting, sculpture, and architecture to present the group’s philosophy about the unification of the arts. 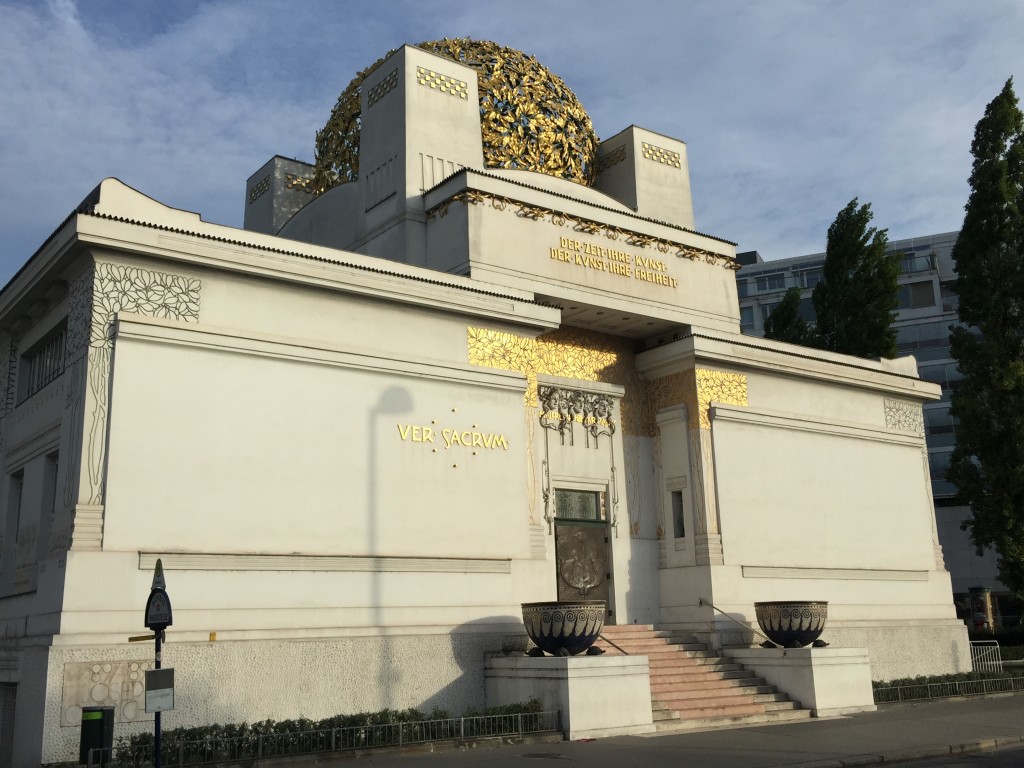 But it is Otto Wagner that is still best represented in Vienna.

Wagner designed his first buildings in the historicist style, but by the mid-1890s, he had already designed several Jugendstil/Art Nouveau buildings. He built structures that reflected their intended function and incorporated the use of new materials and new forms to reflect the fact that society itself was changing. 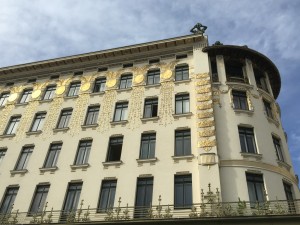 We started with a series of three houses built around 1898 near the Naschmarkt (Vienna’s most popular market) — Linke Wienzeile 38, Linke Wienzeile 40, and Köstlergasse 3. 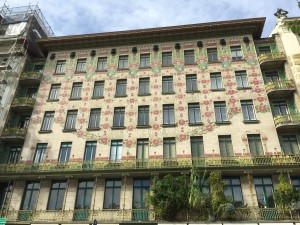 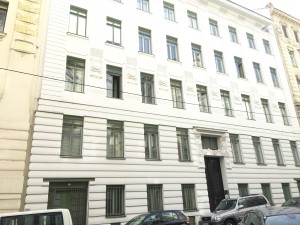 Next, early one morning, we set out to find the Pavilions at Karlsplatz. These are two identical green, gold and white pavilions that were built in 1898 as station buildings of the Viennese city railway. 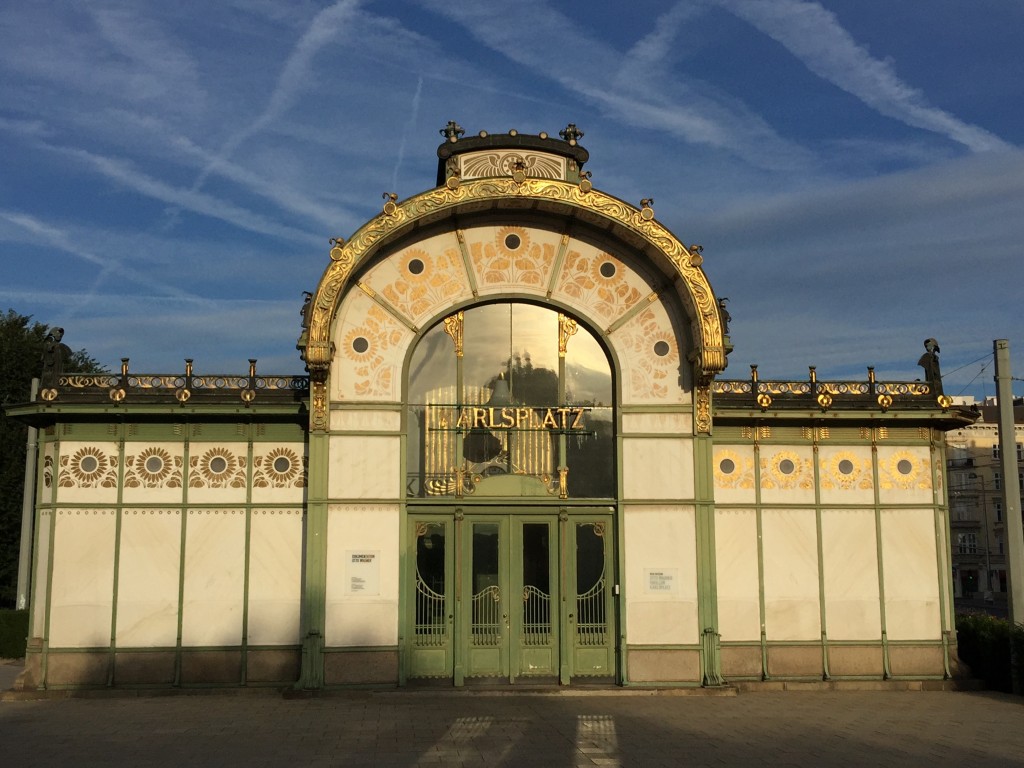 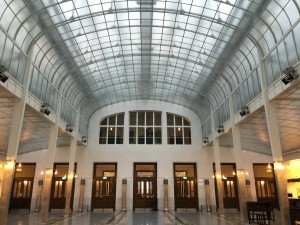 Wagner’s Austrian Postal Savings Bank, is a fabulous piece of modernist architecture.  It was Wagner’s first move away from Art Nouveau and Neoclassicism and is an implementation of his design language where style is defined by function and not form (together with Berlin and Chicago, Vienna is among the places where “functional architecture” was founded). 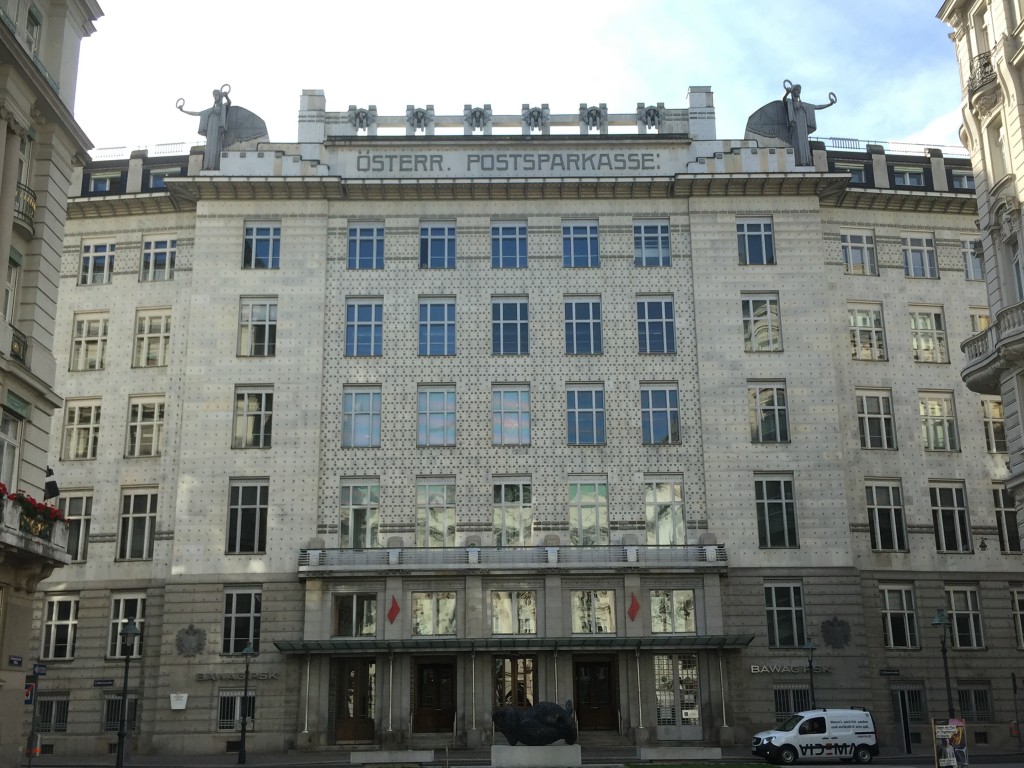 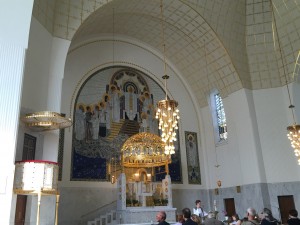 As far as we were concerned though, the highlight was the Kirche am Steinhof (also known as the Church of San Leopoldo in Steinhof) on the grounds of the Steinhof Psychiatric Hospital — considered by some Wagner’s most important work (others say the Austrian Postal Savings Bank). It was constructed between 1904 and 1906. 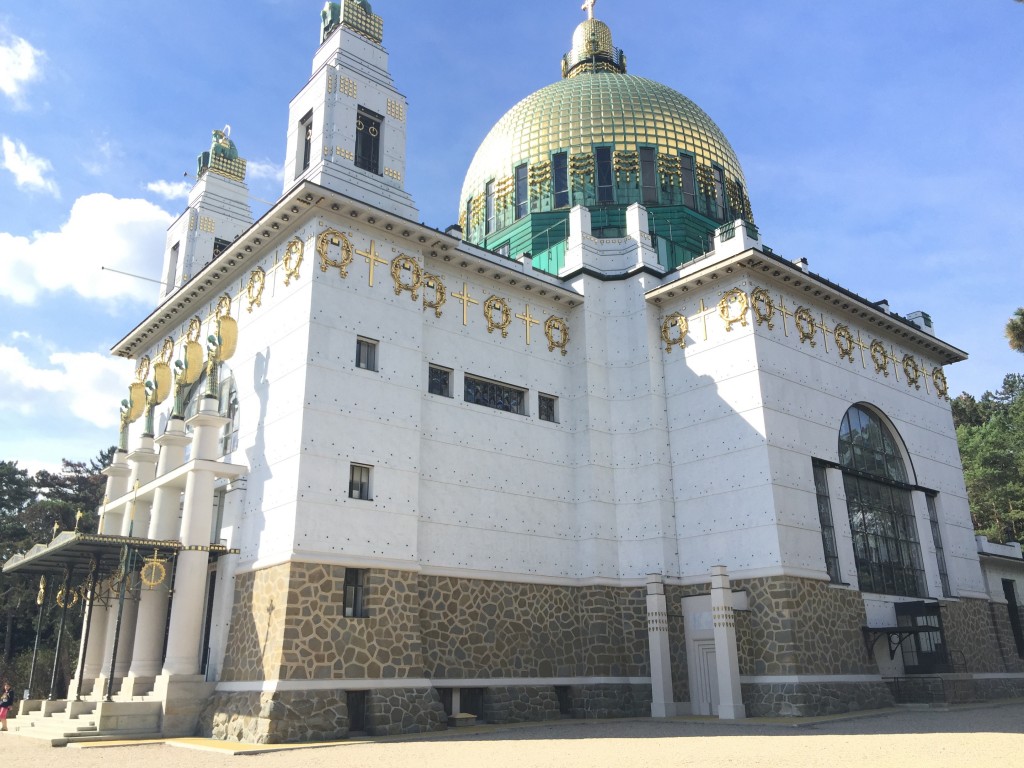 By this time on our trip (as well as on our other travels) we had been to quite a few churches, but this one was unique. It was the first modernist church in Europe and while the mosaics and stained glass and sculptural angels were done by other artists, the great majority of the smaller details were done by Wagner. He also took into account the needs of patients and doctors in a psychiatric hospital and the result is a church that makes everyone feel welcome, secure, and spiritual (Wikipedia has a great discussion of some of those details here).

But not all of Vienna’s new architecture was Secessionist. Adolf Loos disagreed with the lavish decoration and the aesthetic principles of the Vienna Secession — arguing instead for smooth and clear surfaces. For Loos, modernism was a way to return to the traditional in a way that purified it.

His 1910 Goldman & Salatsch Building, for example, had a completely unadorned facade when it was first built — there was none of the decoration common to the time and window boxes had to be added to appease the neighbors. 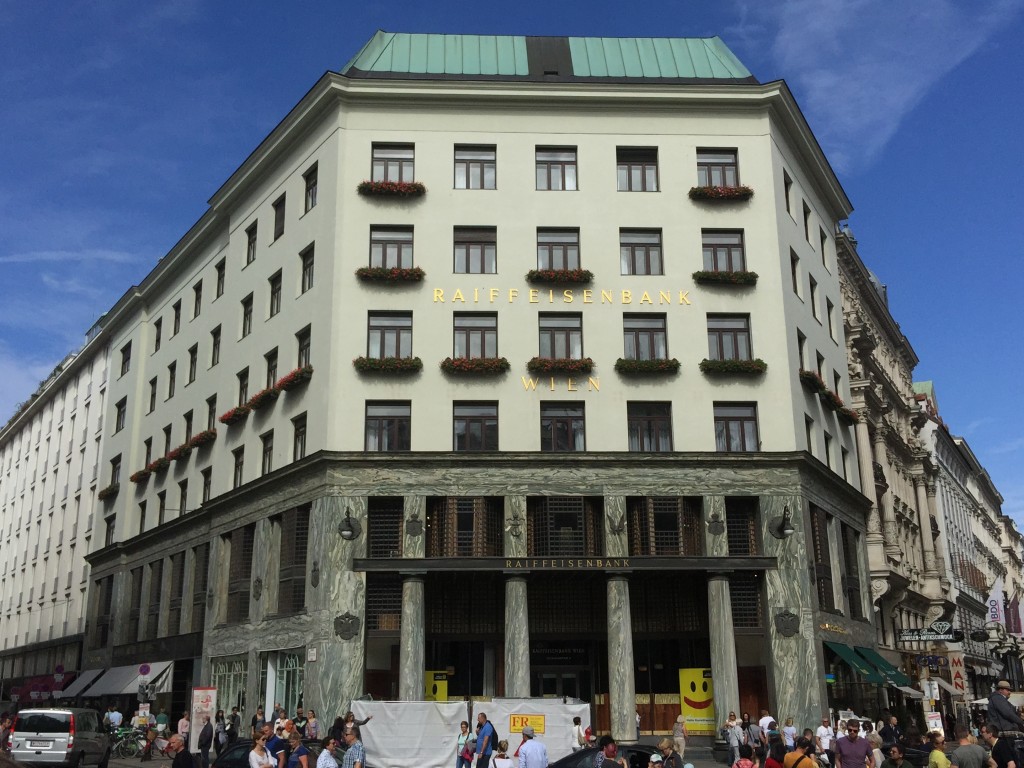 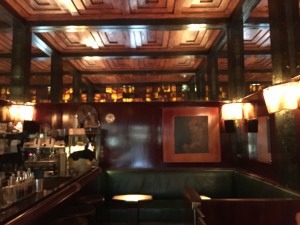 The bar can get very crowded, but it turns out that Google will give you some idea of when it is most popular. So off we went on a Sunday morning at noon. Normally photography is frowned upon, but since we were customers (they make a great Bloody Mary), and not just tourist photographers, and the only ones in the bar, we took a few photos.

Finally there were the applied arts. Artists and architects had started to place special emphasis on the applied arts and were concerned with the design of everyday objects. At MAK (The Museum of Applied Arts) we found a large collection of furniture, fashions, glass, and everyday objects from not only Vienna, but also from around Europe. 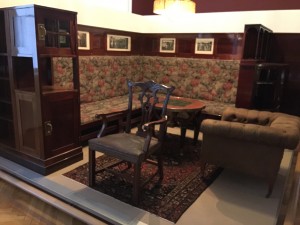 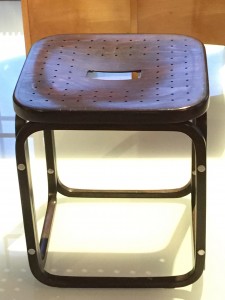 A simple, easy to produce stool 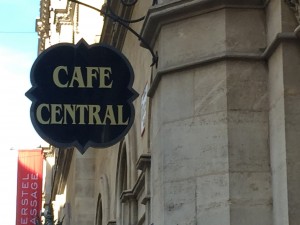 But there was one other thing that made Vienna so exciting — the coffee houses and fabulous pastries. We even went to Café Central a favorite of many of the writers, artists, and intellectuals of the time. Here we also found the Thonet chair, a design icon of Vienna coffeehouses. With its affordable price and simple design — the chairs could be mass-produced by unskilled workers and disassembled to save space during transportation (think IKEA flat pack). It became one of the best-selling chairs ever made, and we even had a few in our house in Palo Alto.

There is way more to the story of 1900s Vienna of course, If you’re curious, send me an email.