There is more to Budapest than how the Soviet and Nazi occupations have framed the  conversation about Hungarian national identity that I wrote about in my post: Exploring the Nazi and Soviet Occupations of Budapest . Budapest, after all, because of its cheap beer (cheaper than water in some cases) and cheap flights within Europe, is the bachelor and bachelorette party capital of Europe. And most of that goes on in the 7th district of Budapest (Erzsébetváros or Elizabeth City), that includes the historic Jewish quarter of Pest (Budapest being made up of two cities — Buda and Pest).

But more importantly, to Linda and me at least, it is filled with restaurants, galleries, shops selling handmade goods, and lots of murals done by street artists that create an aesthetic for the district.

But this was not always the case. Until 2002 this was a badly decaying neighborhood — and the transformation is an interesting story. (As Linda likes to point out to people, being in Eastern and Central Europe has been an interesting history lesson.)

The Nazi occupation of Budapest started on March 19, 1944 and the Budapest Ghetto, surrounded by a high fence and stone wall, was created in Erzsébetváros, on November 29. Although it lasted for less than three months, until the liberation of Budapest on January 17, 1945 by the Soviet Army, its impact has been felt for years.

Later, during the Soviet occupation the district’s population rapidly decreased because young people and families moved to the newer districts. It wasn’t until around 2005 that gentrification and recovery started.

And some people say, what was at the heart of the revitalization of the district was a “‘ruin” pub (or bar for us Americans) — Szimpla Kert. 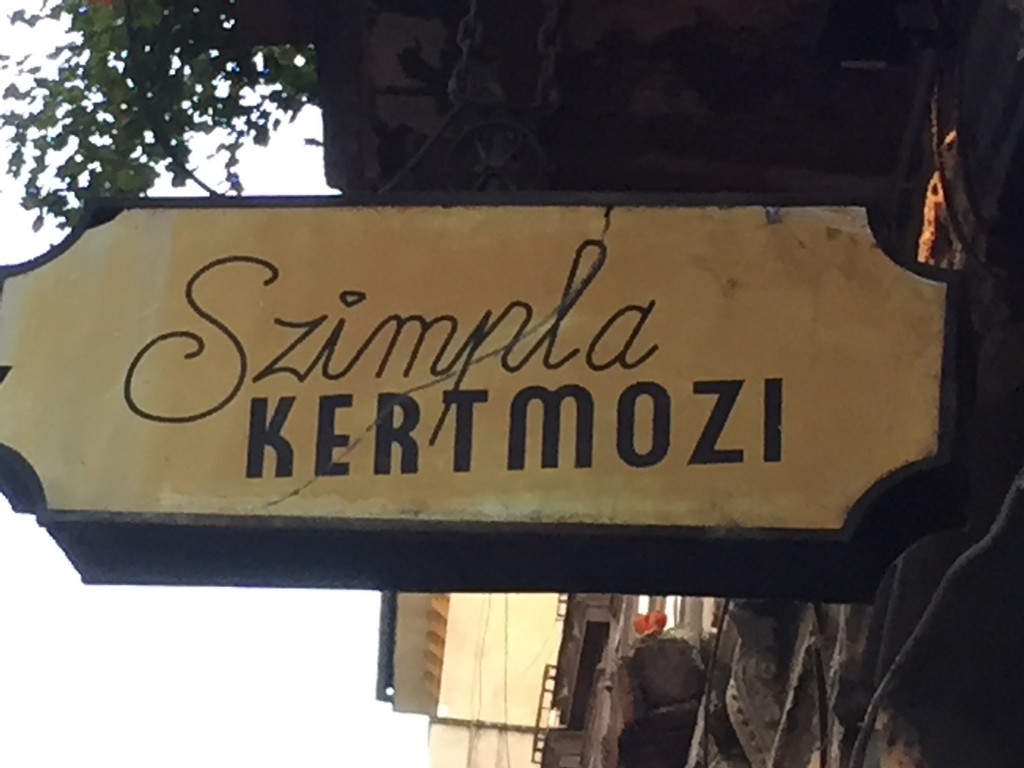 In 2002, Szimpla Kert opened and in 2004, it moved to a bigger building slated for demolition, one that had housed homes and a factory. By then all that was left was dilapidated walls, and a tarpaulin where a roof should have been. The Szimpla founders thought the “ruin” building was perfect, and this spot became the epicenter of Budapest’s nightlife. 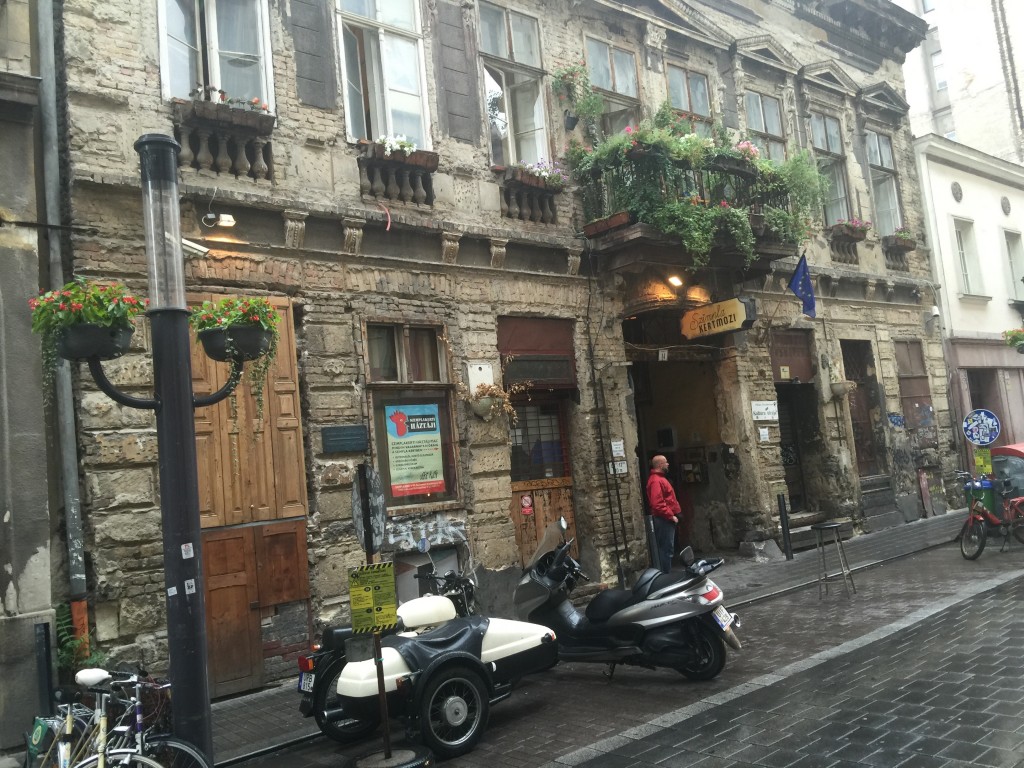 Part of the attraction of Szimpla Kert — and ruin pubs in general — is the eclectic collection of funny, rude, weird, and broken stuff covering the floor, the walls, the ceiling, and on just about every surface.  Nothing matches, yet everything belongs. In the large open courtyard there is a Trabant (the car that gave Communism a bad name) you can have a drink in, and the ground and first floors are a maze of rooms. It is in a continual state of redesign, with new things added all of the time. We could have spent hours and hours exploring it all. While there are the traditional bouncers, they are there not to ensure only the hippest of the hip get in, but rather that people are quiet on their way out, so as to not disturb the neighbors. 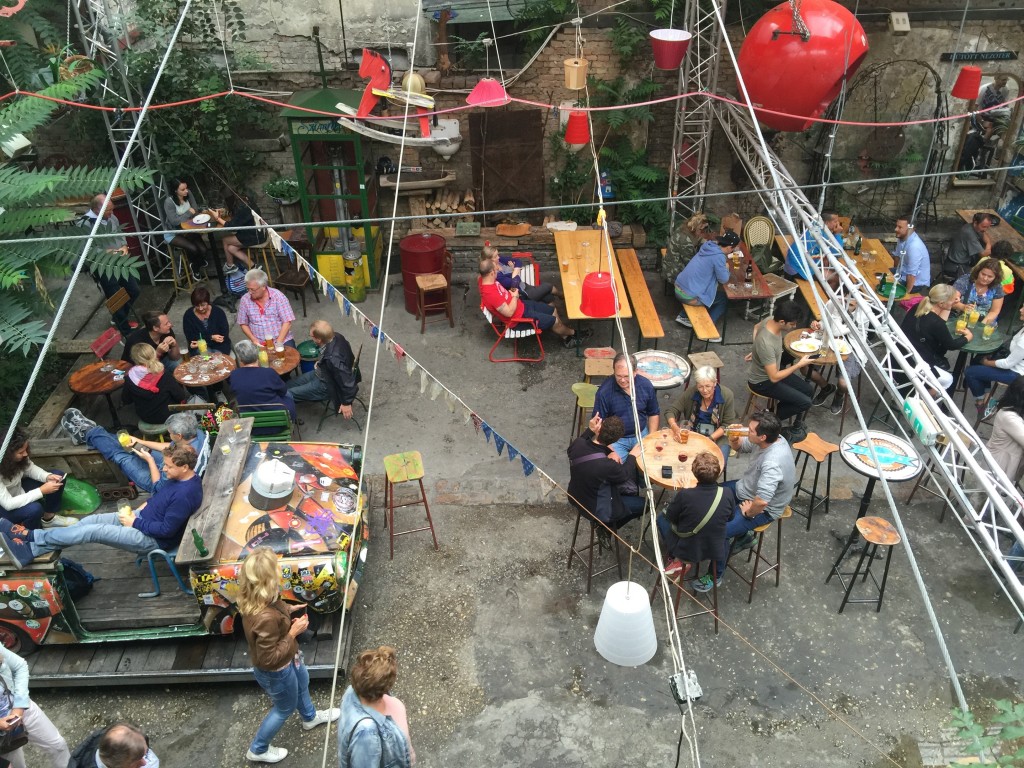 The open courtyard – notice the Trabant

But Szimpla Kert is not just about a pub. There are movie screenings, live music events, exhibitions, and even a farmer’s market. One musician told us Szempla Kert looks for new artists, even giving them free studio time.

On their website, the founders talk about what their pub is about. “Szimpla defines itself as a ‘cultural reception space’, indicating our intention to embrace genres and performers off the mainstream, presenting them in an informal atmosphere. Moreover, with constantly supporting initiatives for urban sustainability, Szimpla has been serving as an ultimate incubation house of green ideas from the very beginning.”

Szimpla Kert was the first ruin pub (although there are quite a few now), and with the alternative utilization of an old building sentenced to demolition, they directed attention to forgotten values and the possibilities of the district. And as people started coming to the district, restaurants and stores opened, and people started moving back to the district.

But even with all that activity, there were (and still are) a lot of buildings that needed renovation, and parts of the district were still pretty bleak. And here’s where the street artists came in. As opposed to some places, the goal of many of the street artists is to add color and create an aesthetic that makes the district a better place to live (similar to what is is happening in Łódź, Poland and other places).

When the first public art mural appeared in Erzsébetváros, people were surprised to see a blue sky and lush green fields painted on the side wall of a drab, old building facing a small playground. The five members of Neopaint Works did this project for free, in six days, after a two year-long procedure to get permission, and showed how fast a run-down wall can turn into something beautiful. Since then other urban walls, mainly but not exclusively in Erzsébetváros, have become canvases for artists and the new murals are brightening up the streets and the urban landscape. 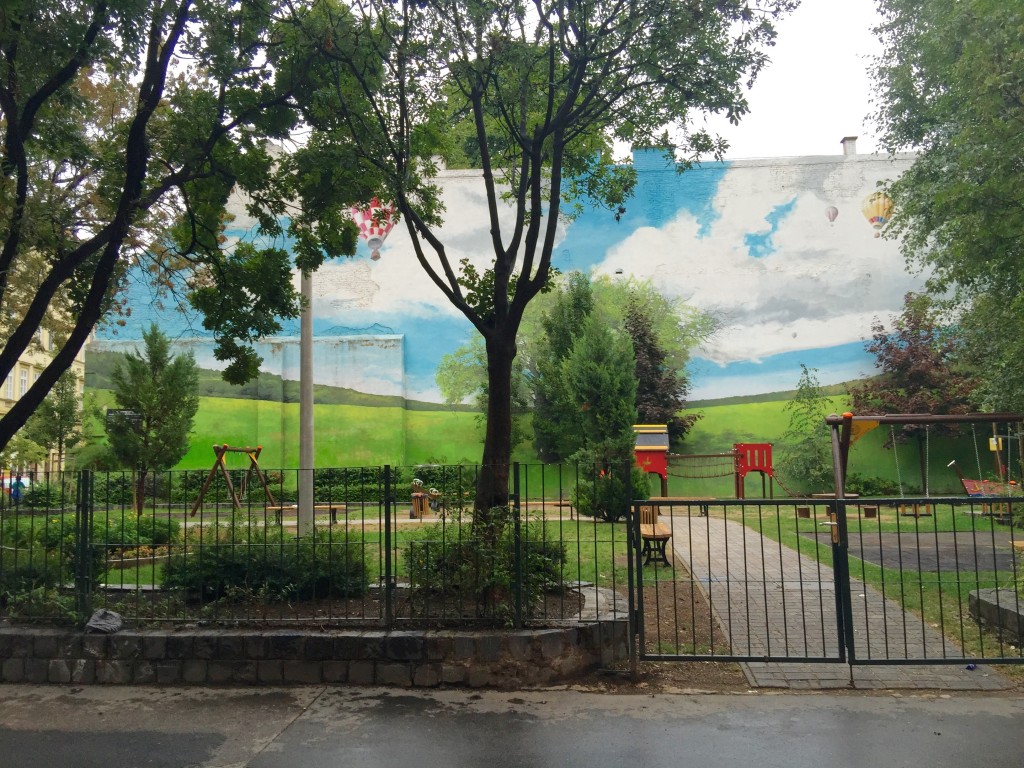 The mural that started it all

Neopaint Works, (the Hungarian version of their website displays best) was started in 2005 and creates decorative falfestéseket (wall paintings) for a variety of clients. They started the TűzfalRehab (Firewall Rehab) project in 2010, which now has more than 20 giant murals mainly in the Erzsébetváros. You can see some examples of their work and on their web site.

Another group painting murals is Színes Város (Colorful City)   They look for neglected public spaces, grey and alienating, with pedestrian traffic, to create art that results in a warmer and more welcoming cityscape, reflects on everyday issues, and represents respect and appreciation for nature and humanist values. People can “vote in”  any empty wall anywhere in the country, and if they manage to get a sponsor, they’ll create a mural. You can find some of their projects here. 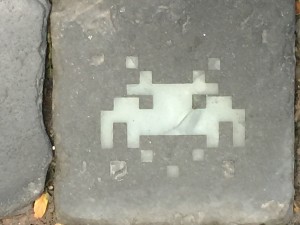 This used to light up when you stepped on it.

There are also many other street artists, both in Erzsébetváros and across Budapest, often, but not exclusively, creating works with the same intent. For example, here is a work by street artist Invader, on  a cobblestone in one of Erzsébetváros’s streets. You can see some of my photographs of Budapest street art, including some traditional graffiti, here.

You can also find the art on some web sites: Colorful Murals in Budapest and Murals in District 7 (these sometimes take a while to load).

The revitalized Erzsébetváros has attracted musicians and artists and other creative people, and has become an island in the middle of a sea of a repressive government and a center of progressive thinking. The municipal councilor for Erzsébetváros donated part of his  monthly salary to rent portable toilets for use by migrants outside the Keleti train station. A volunteer group called Migration Aid, formed a few months ago in Budapest, is located in the district.

We really liked Budapest and found it interesting, exciting, and multi layered, and oh yes, we had a great time there.