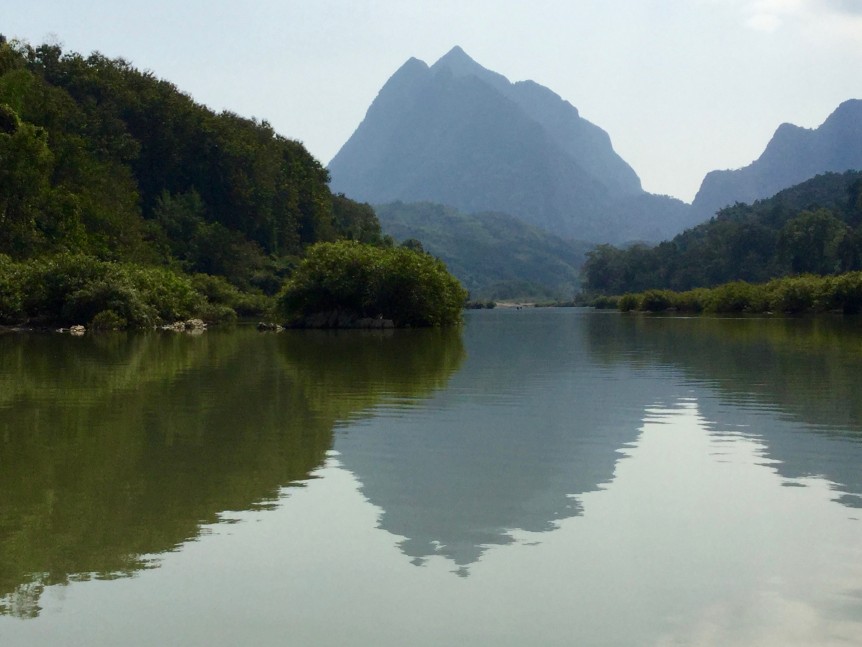 It was in Cambodia where I first became fascinated with rivers and boats. Granted, our boat traveling down the river to Battambang was, to be kind, a bit rustic, but traveling down the river a lot of things slowly unfolded, things that I may not have noticed, or even seen, thundering through a village in a car or bus. Yet, though the boat itself could have been much more pleasant, we found it to be the most comfortable way to travel in Cambodia. But it was in Laos where I became smitten with rivers, and everything about them — river life, the boats, and how the people living on its banks were integrated with the flow of the river. Traveling on the Mekong I first began to “get” Laos, and how rivers were the lifeblood of the country.

Our first adventure on the Mekong (a river I am particularly in love with) in Laos was our trip from Khong Island, outside of Pakse, through the Siphandon (the 4000 islands) — it’s called that because thousands of islets miraculously appear during the dry season — to Don Kohn Island. 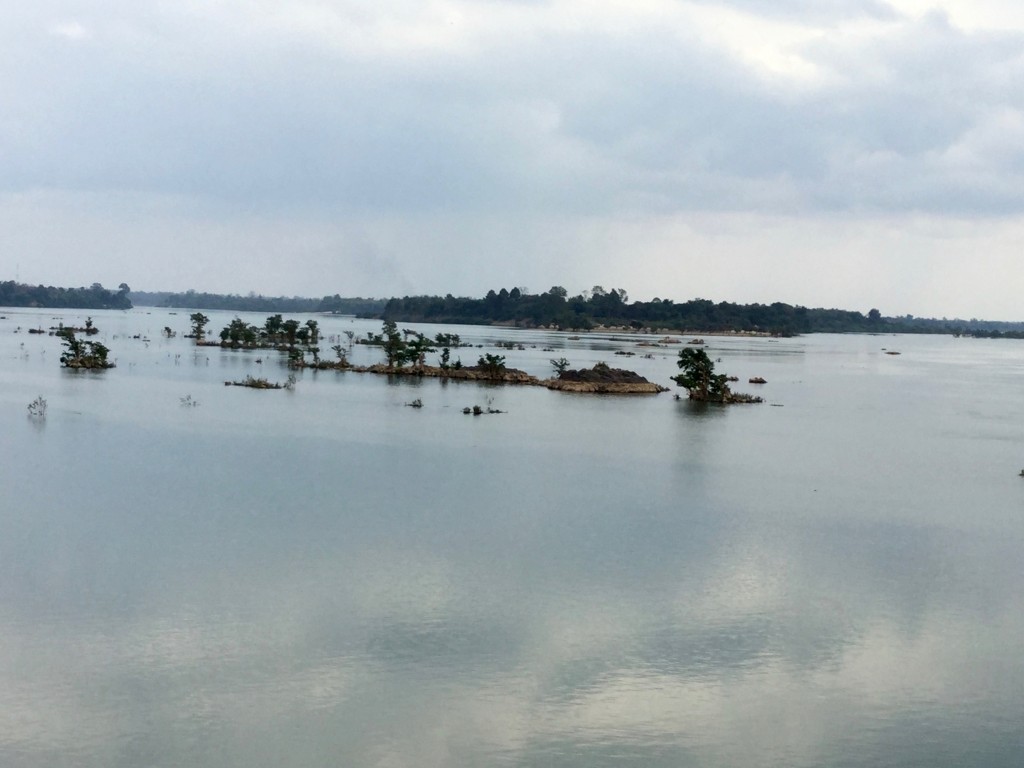 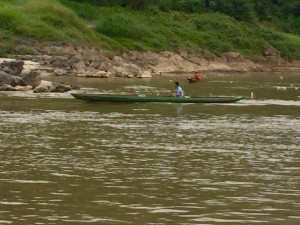 Along the way we saw life on the river — lush green gardens on the river banks, fish traps in the river, and the wonderfully aesthetically pleasing (on average nine or ten times as long as they are wide) traditional Mekong river boats. The most beautiful had no motors and were used by a single fisherman on the river or river travel for not more than a few people. The less beautiful were long-tails — the same design but with an outboard motor and ruder that could be raised or lowered based on water depth — the kind we were in. 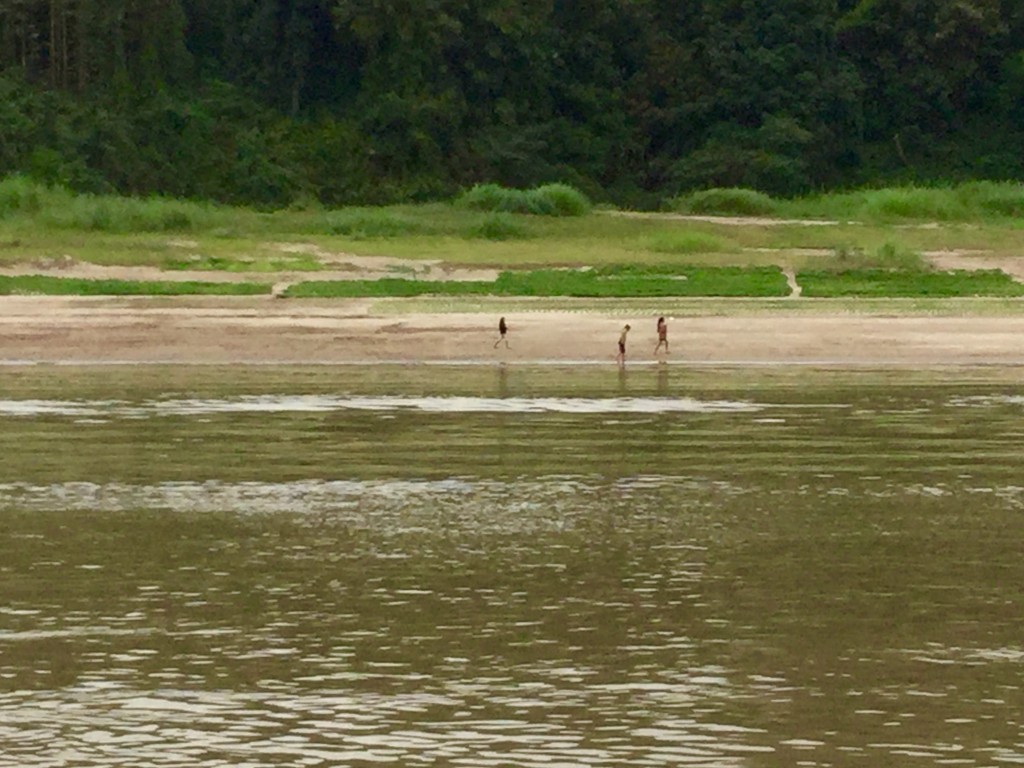 Our trip to Don Kohn was ostensibly to see two things — the Wang Paa Khaa river pool with the five remaining Irrawaddy river dolphins, and the spectacular Li Phi Falls. We did get a glimpse of two of the remaining dolphins, and the falls were spectacular (as were the Khone Phapheng Falls, considered to be the largest waterfalls by volume in South East Asia which we visited the next day, not by boat, unfortunately, but by car), but the river itself was still the star of the show. 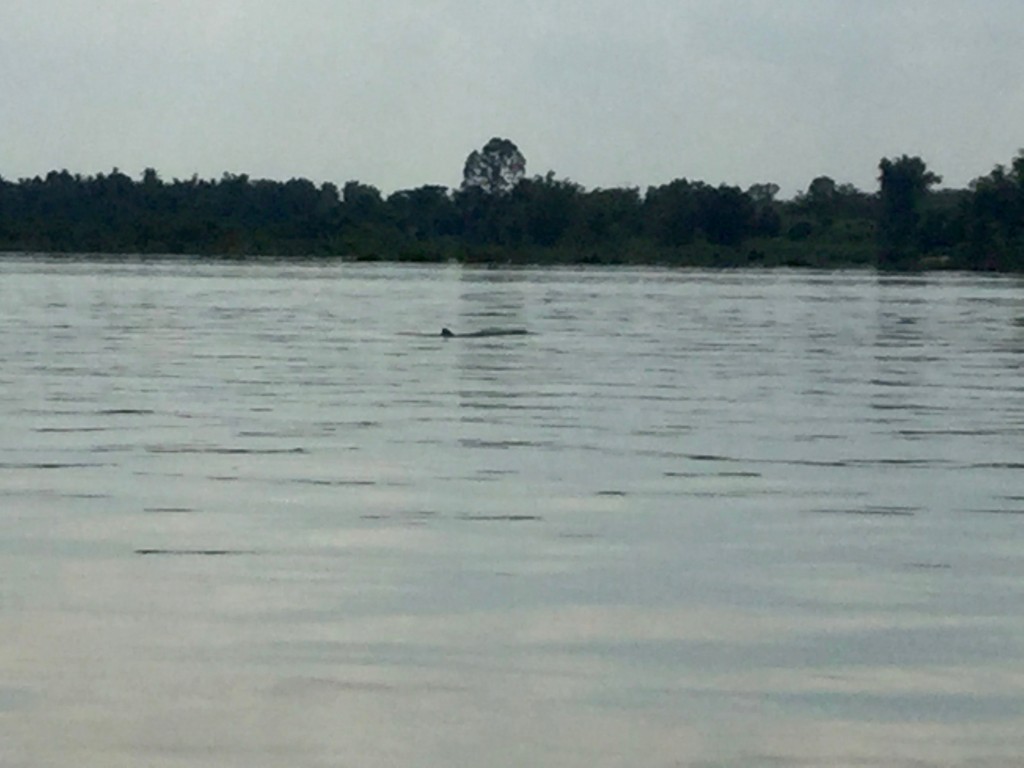 If you look closely you can see a dolphin 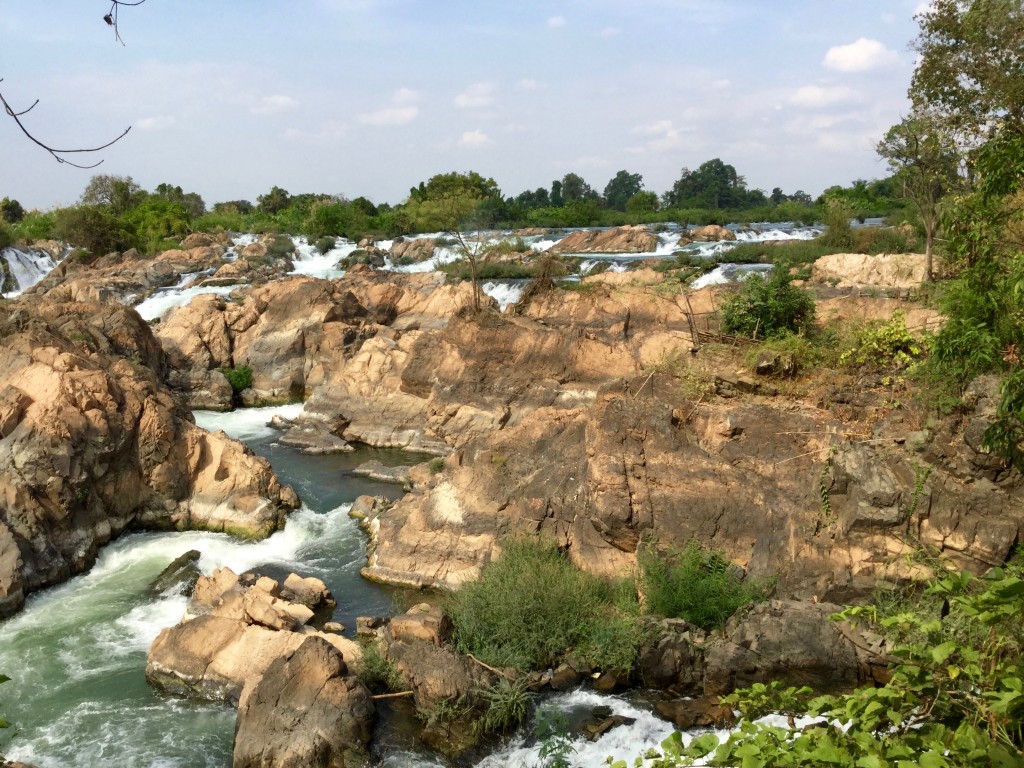 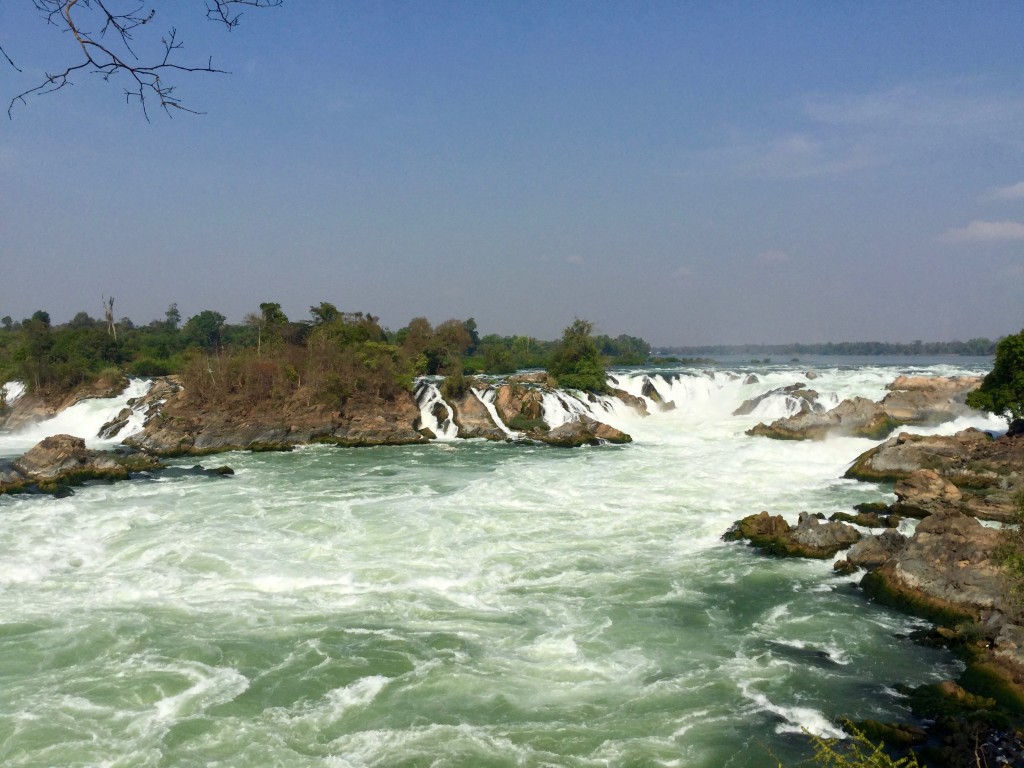 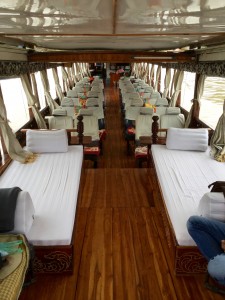 Our boat up the river

But as it turned out, the trip south on the Mekong was just a warm-up for the main event — a boat trip up the Mekong from Luang Prabang to Pak Beng on the way to the Thai border. Again we saw life on the river, and while our trip south was beautiful, traveling north was where the majesty and power of the Mekong become apparent. Villages back from the river, barely visible now during the dry season, but right on the river at high water in the wet season. 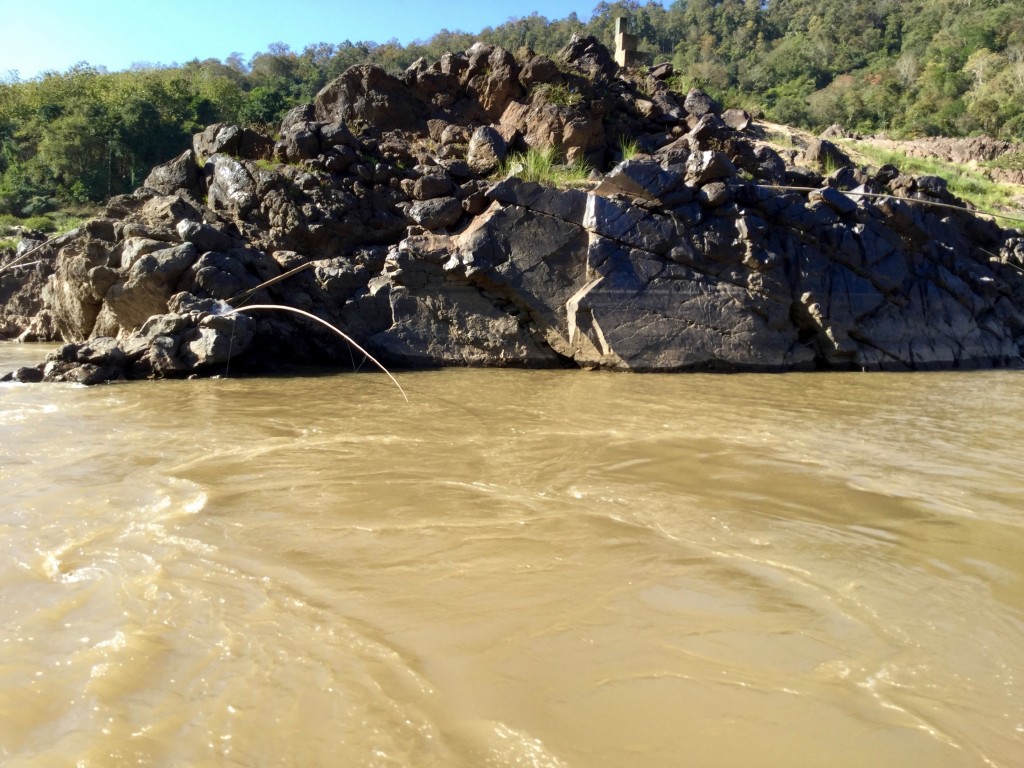 The Mekong is a trans-boundary river in Southeast Asia, the world’s 12th-longest river and the 7th-longest in Asia with an estimated length of 4,350 kilometers. From the Tibetan Plateau the river runs through China’s Yunnan province, Myanmar, Laos, Thailand, Cambodia and Vietnam. And while extreme seasonal variations in flow and the presence of rapids and waterfalls in the Mekong make navigation difficult, the river is a major trade route between Western China and Southeast Asia. But man-made variations exacerbate the variations in the flow. China’s dam construction on the Upper Mekong affects water height even in the summer and has already caused downstream impacts, especially along the Thai-Laos border where communities have suffered declining fisheries and changing water levels that have seriously affected their livelihoods. By changing the river’s hydrology, the dams on the Mekong block fish migration and affect the river’s ecology throughout the entire basin. This is worsened by the slash and burn agricultural practices causing hillside erosion, as agricultural soil is washed away into rivers, clogging them with silt.

We left the river at Pak Beng, and continued exploring northern Laos by car (unfortunately) — bumpy roads and long drives with breath taking scenery along the way. It was here that we got an eye-opening introduction to the selling of Laos. 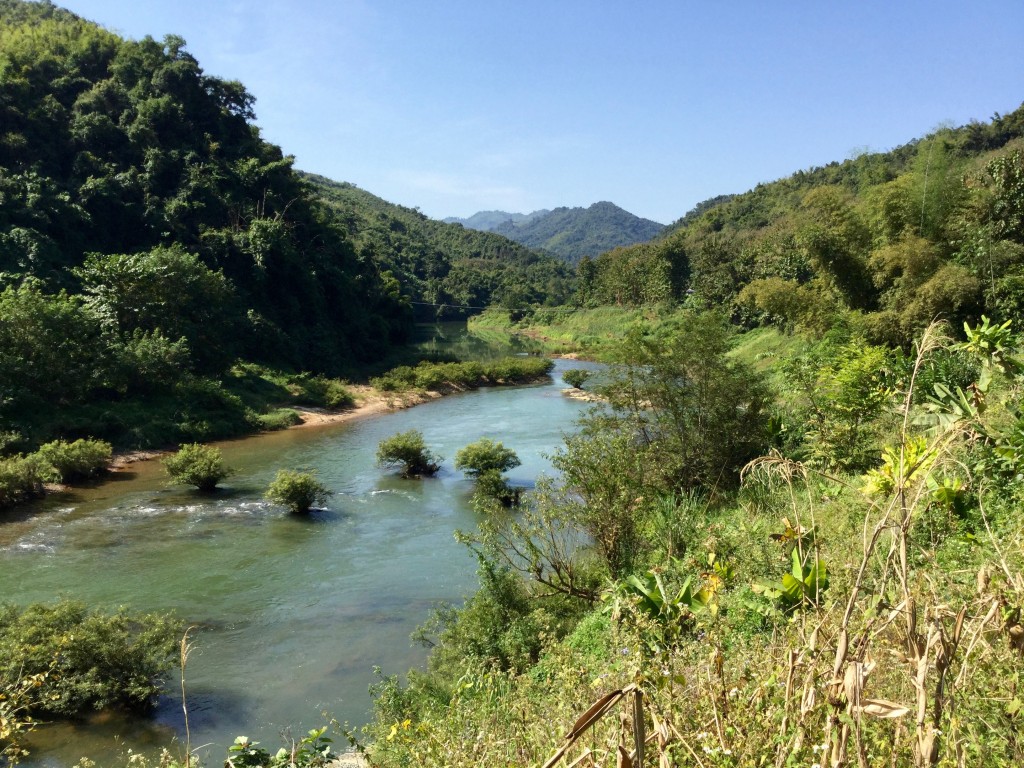 Laotians are granted the right to occupy land, which is all state-owned (in this communist nation). While some citizens can sell the right to use their land if their family has inhabited it for generations, citizens cannot officially own property. The government reserves the right to reclaim occupied land when it is deemed to be in the public interest, such as for national development projects. This is happening more and more as plantations and mining operations are classified as national development projects by the government and the land sold to foreigners (with the vast majority Chinese). This, in turn, has a negative impact on local communities which rely on land, forests, and water for their livelihoods and food. This has led to forced evictions and compensation disputes, and which, according to our guide, the locals inevitably lose unless they can find a well-connected lawyer. 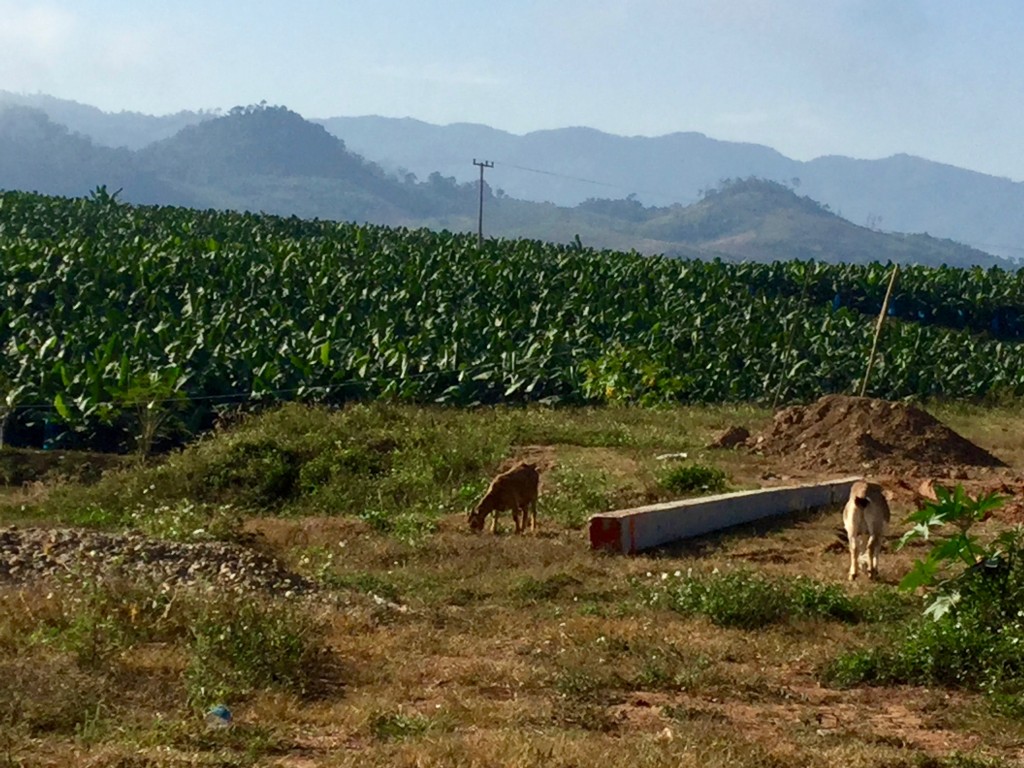 We saw huge plantations now owned by Chinese companies, land that would be farmed by villagers, who then become cheap labor for these new owners. Laws are passed to encourage investment without much regard for the impact on the remote villagers “who still live in nature” (a phrase used by our guide on this part of the trip who was from a small village himself), We repeatedly heard from him that the government pays no attention to the impact of their actions on the countryside culture or people.

The final part of our trip was down the Nam Ou River from Muang Khua to Nong Khiaw on a small private boat. The water level was down and what wasn’t supposed to be a white water trip became one. 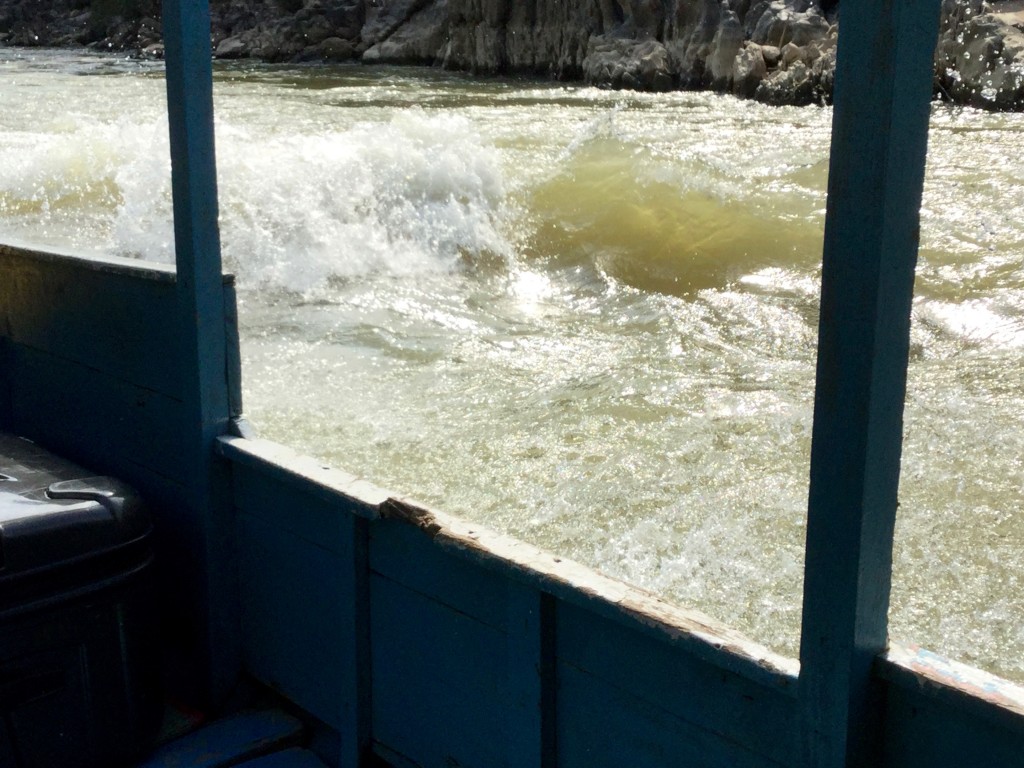 White water on the Nam Ou 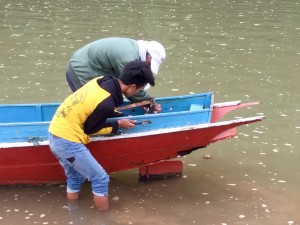 Early on we hit a rock and broke a propeller, not an uncommon occurrence, and the boatman quickly replaced it with a spare. The second time we hit a rock we knew we were in trouble when he paddled the boat to a small island and anchored it. This time we not only broke a propeller, but also ripped out a cross brace in the process. But the boatman was resourceful, as you have to be living on the river far from city conveniences. After a lot of hammering, some nails, help from our guide, and a few words in Lao that we couldn’t understand, we were on our way.

But the romance of river travel on this stretch of the Nam Ou is about to come to an end. The lives of thousands who rely on the river for their income as well as those who are dependent on the boatmen to take their produce to market, their children to school, and their relatives to ceremonies and festivities are about to be devastated. The Lao government and Chinese hydropower developer Sinohydro are working in cooperation toward the construction of seven hydropower dams on the Nam Ou River in northern Laos, and the trip we took will no longer be possible when one of the dams is completed sometime in 2016.

And the sale of Laos to the Chinese continues.

After an almost 250 year march through industrialization, post-industrialization, and the information economy, most of western culture’s ideas about morality, values, music, literature, and politics now emerge from urban areas. Yet while power and money and the almost forced march approach to a western style industrialism is what you find in the cities, a sizable part of the population still wants to stay in the countryside and maintain its traditional values, but has been negatively affected by those policies. Here is the fight for the heart and soul of the country.

And while a synthesis is what is needed to enable these countries to compete in a twenty first century global economy and maintain their traditional culture, I am pessimistic this will happen. Even though maintaining the traditional culture may have more supporters, and the moral high ground, it looks like money will trump all.