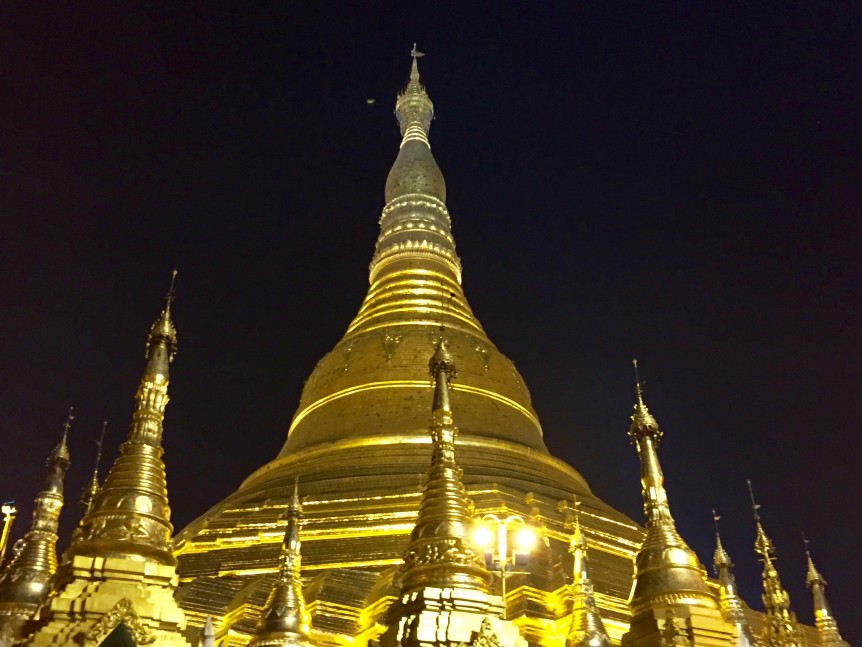 After 50 years of a military dictatorship that isolated Myanmar from the world, Nobel Peace Prize-winning opposition leader Aung San Suu Kyi’s party won a clear majority in last November’s elections. Even though the new party had not yet taken power, the people we talked to were very open and excited (although still justifiably cynical) about the possibilities. Regardless, Myanmar is now the new cool kid on the tourism block and has become one of the darlings of the travel writer/blogger set.

Because it is rapidly changing, much of what we read about Myanmar before we got there is no longer (if it ever was) true. What’s more, based on our experiences after a month there, it appears that many of the articles we read about Myanmar were probably written by people who had never been there and who learned about it from articles and posts by other people who probably hadn’t been there either.

So here is what you can count on if you want to go to Myanmar.

There was no problem getting a visa or getting into Myanmar.

At one time the U.S. dollar was, for all practical purposes, the most important currency, and most of the purchases made (at least for tourists) above the equivalent of a few dollars would be paid for in U.S. dollars. These dollars had to be new and pristine, with no bends, no folds, no tears, and no marks. If you read the internet discussion groups, this is still a common belief, and you’ll find a lot of advice about the kinds of bills, what denominations to take, and how to get pristine bills.

But the importance of U.S. dollars as a (tourist) currency has waned dramatically. We did bring lots of pristine U.S. dollars and, after the first day in Myanmar, we hardly used them at all. Myanmar is actively curbing the widespread use of U.S. dollars, and the central bank has revoked foreign exchange licenses for hotels and restaurants.

On the other hand, we had no problems whatsoever using kyat (the Myanmar currency) for anything, with the exception of a couple of hotels that preferred dollars but would take kyat. In one hotel where we paid in U.S. dollars (anxious to get rid of them), they even told us they are switching to kyat at the end of this year.

Contrary to what we had read, there were lots of ATMs and getting cash from our U.S. bank account was never a problem. And cash is preferred. Most of the time paying with a credit card (MasterCard or Visa only) involved a 3% or so surcharge in a store or even a hotel, although we didn’t find a service charge booking hotels through Agoda (the best booking site for Asia).

We also found mobile phone service, and especially data access, to be pretty good, and it was easy to get a tourist sim card and even top it up as needed. We often used our phones as hotspots because even in good hotels, the wifi could be dreadful. We were told this was a last mile connectivity problem, but that is rapidly improving as well.

We took trains, buses, and boats to get around Myanmar, although people we met said planes were just as easy. The (VIP) buses were surprising good, although the roads still need a lot of work. We took the train from Yangon to Mandalay, and at times it was like Mr. Toad’s Wild Adventure ride at Disneyland. Besides the normal up and down, there was quite a bit of side to side movement, and sometimes you couldn’t see into the next car at all through the open door (there was no air-conditioning, but it wasn’t the big problem).

And that’s the good news.

On the other hand, if you are traveling on your own, as we were, Myanmar is not quite ready for prime time — at least in our opinion, and one shared by the manager of a hotel we stayed at and who has lived in Myanmar for several years. Give it five more years he said. While it may appear that a lot of people speak English, there is a lot less English spoken here than in most other Southeast Asian countries. Often when you ask a question, the response you get back is simply a restatement of what you said and not a real answer. I am not complaining about it, I know it is our problem since we don’t speak the language, but there wasn’t even a module in Google Translate for Burmese.

So we counted on hotels to help us out, and, depending on the hotel, it usually worked out.

The conventional wisdom is that the Burmese are a very friendly and outgoing people, and we did meet a lot of lovely people, once we got past some initial reserve. But there were also a surprising number of people, especially those working in tourist related places, that were, at best, only existentially civil.

But in contrast to the people we met in Cambodia and Laos, we often had the feeling that we were being hustled, and that was most obvious when we traveled, and, as it turned out, we were. At the airport, and train and bus stations we encountered aggressive official looking porters in some kind of uniform, who would grab our bags, carry them a short distance, and then demand payment, along with “taxi drivers” who were really just pimp-like middlemen managing and herding you into their clients’ clutches and who charged outrageous prices — 10,000 kyat (around $8.25 US) for a four block ride for example. Trying to get past them to find honest drivers was very difficult, although we finally did figure out how to deal with that.

Myanmar, of course, is not the only place that happens, and I am not complaining or whining or saying something needs to be done about it (but it is a fact you will become painfully aware of), or that Burmese drivers are unique in that regard. In some ways Bangkok is worse, and hailing a taxi on the street in Prague (as opposed to calling a taxi) is something to be avoided at all cost. But porters were a new twist, at least for us.

Even going someplace from our hotel, with the price negotiated by hotel staff, we were often overcharged. For example, when we were leaving Myanmar and going to the airport we got a price quote of 10,000 kyats (which was still high — it should have been 5-7,000 kyats, but it was early in the morning, so we agreed). On the way to the airport, the taxi driver all of a sudden pulled over at one of the ubiquitous auto repair places on the side of the road to get air in his tires. He didn’t have any money so he “borrowed” 200 kyats from us. When we got to the airport, we got our luggage, and I gave him a 10,000 kyat bill. “No,” he said, “it is 10,000 kyat each.” I told him to go !@#$% himself and he just turned around and left.

On the other other hand, the Burmese are close to 90% Buddhist and most of them (perhaps even the hustlers, who knows) are quite religious. Buddhism in Myanmar is predominantly of the Theravada tradition and practiced in conjunction with nat worship, spirits who can intercede in worldly affairs. In terms of the proportion of monks in the population and proportion of income spent on religion, Myanmar is one of the most religious Buddhist countries. Monks (collectively known as the Sangha) are venerated members of Burmese society. It was an unexpected pleasure when many of the guides and drivers we hired came in and prayed at the temples we were visiting.

Some of the tourists we encountered weren’t much better behaved than the taxi drivers. Based on the recommendation of a guide we hired, we went to the Mahagandaryon Amarapura monastery to watch the 1,500 monks receive their food. Personally, we were uncomfortable from the start — and it turned out to be voyeurism at its finest. It got worse as the monks sat down to eat and people jostled with each other to photograph them through the open windows. What was even worse, despite all of the signs to not do so, many tourists went into the dining hall and photographed the monks eating. A monk we started talking with explained that, even though what those people did was blatantly rude (my words not his), as Buddhists, and as monks, they would never remonstrate them.

I admire their patience.

That being said, there are some interesting and beautiful things to see in Myanmar and it can be an interesting place to visit — I’ll write about that in future posts. At this point though, I think there are two ways to travel in Myanmar. The first is as a backpacker. Myanmar is still relatively undiscovered, especially out of the main tourist areas, and if you are willing to go with the flow, it can be rewarding.

The second is on a packaged tour, where your guide insulates you from the day to day hassles we had. We had some friends that took a river cruise down the Irrawaddy and they had a wonderful time.

We, however, had picked none of the above and decided to travel on our own. We booked our own transportation and hired local guides to take us around a city and for day trips. What we found was while there was a price to pay for traveling that way, it was a rewarding experience and allowed us to discover things we might have missed traveling any other way.