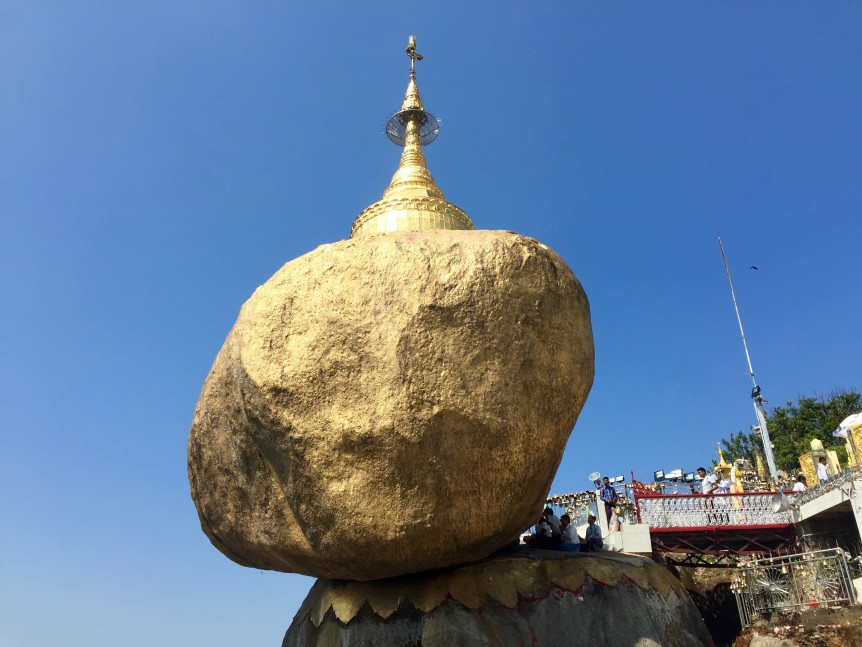 If you are a fan of pagodas, Buddhas, temples and monasteries, you’ll love Myanmar — there are probably more religious buildings In Myanmar than there are Starbucks in the world. But Myanmar was a bit of a letdown for me. We had already spent two months in Southeast Asia and seen and explored hundreds of temples and ruins. While we found some very special, and often unique temples and ruins in Myanmar, it would have been even more interesting if it had been our introduction to Southeast Asia. Regardless, there were a lot of interesting things in Myanmar, and there is no question that the trip was well worth it.

In Myanmar we did the big four — Yangon, Mandalay, Bagan, and Inle Lake. We wanted to get to Mrauk U or Mawlamyine, but the logistics didn’t work out. Traveling in Northern Laos and spending a night in one place and then moving on, we rediscovered that was not the way we liked to travel. While the places you visit dictate the way you have to travel, as they did in Laos, given the choice, in Myanmar we tried to find places we wanted to visit for at least a few days and take day trips to further explore the country. We knew we weren’t going to see everything we may have wanted to see in a month anyway, so while we may have missed some places, what we missed was far offset by the quality of experience in the places we did visit. 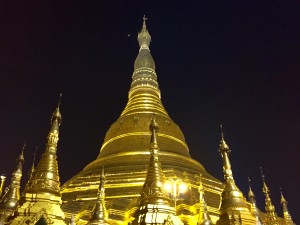 Yangon, I thought, was the least pleasant of all the cities we have been to in Southeast Asia. It is a smoggy, sprawling mess with horrendous traffic, and not that much to see. What it does have though is the Shwedagon Pagoda, which is not only magnificent, but where we found a tour guide that did a marvelous job of not only showing us the Pagoda, but also giving us an introduction to Buddhism that helped us make sense of everything we had seen, and were about to see. 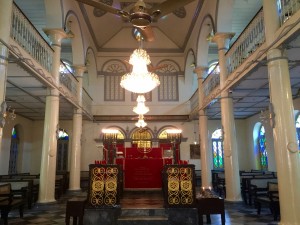 The last synagogue in Myanmar

And then there was the Musmeah Yeshua Synagogue (the only synagogue in Myanmar for the few Jews left here) near the city center on a small street of Muslim shops. It was built by the Baghdadi Jews from the Middle East and India arriving during Burma’s Colonial era. Before WW II, it grew into a community of 2,500 Jews, but many left because of the Japanese occupation and more left after the Burmese army seized power in 1962 and nationalized most businesses. For me, it was a poignant window into a deferent time and a different kind of place. 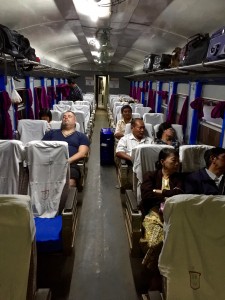 I had read quite a lot about how cool train travel was in Myanmar (in reality it leaves a lot to be desired), so we took a grueling 15-hour train ride from Yangon to Mandalay, and while not that awful, most of it wasn’t all that interesting either.

In Mandalay, besides the visits to pagodas too numerous to count on my fingers and toes, we discovered the skinny Buddha — built in 2011, a remarkable 75 foot-tall seated Buddha that is as much Cubist as Asian and one of the most interesting Buddha statues I had ever seen. I wasn’t able to find out too much information about it other than it was built in 2011 and is a representation of Buddha when he was at the beginning of his journey, still trying to figure out how to reach enlightenment. 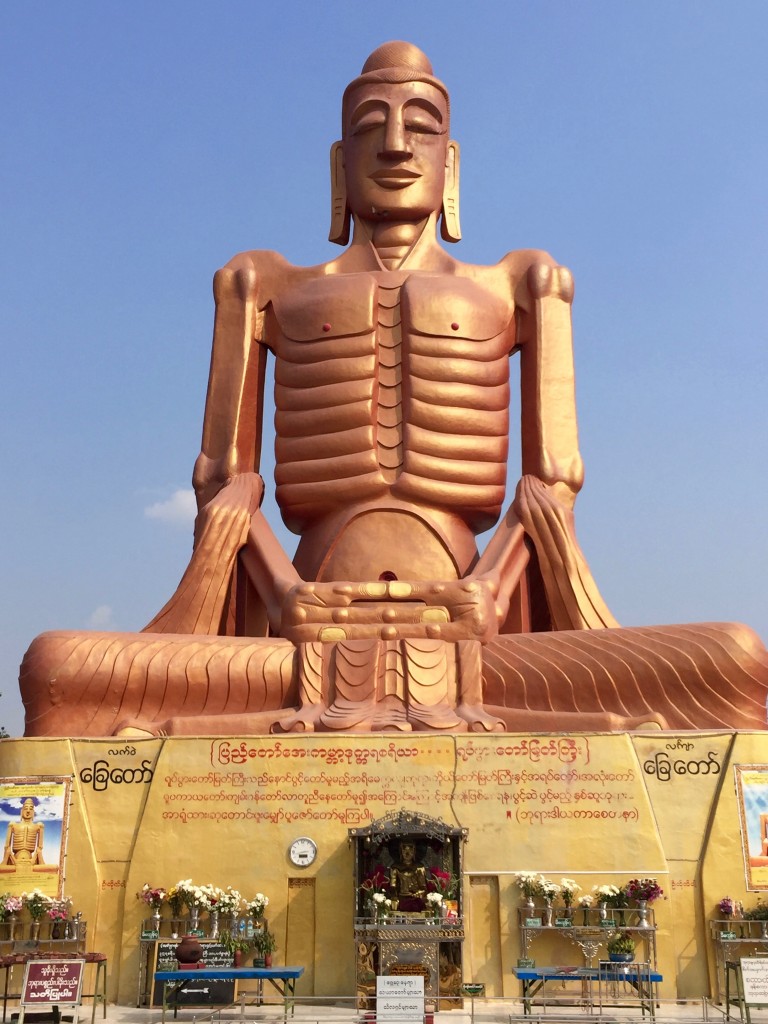 We had hired a driver to show us the city, and as is usual when you do that, we were also gently guided to two tourist traps, which were both surprisingly interesting. In many of the Temples, pious Buddhists place gold leaf on a statue of the Buddha, and we saw how solid gold bars were turned into gold leaf — way more interesting to watch than it sounds. The other was an area of stone carvers, where we couldn’t buy anything because we couldn’t fit a 2 meter high, several hundred pound solid marble sculpture of a Buddha in our suitcase or the overhead bin, but it was fascinating to watch how the carvers turned blocks of marble into statues of the Buddha.

But pagodas aren’t only about religious practice today; they also tell what can be a fascinating story about the history of Myanmar. We took a boat to Inwa, the capital of Burmese kingdoms from the 14th to 19th centuries, crossing the Irrawaddy River and then riding around Inwa in the traditional (tourist) horse cart (an incredibly bumpy ride, again). As we explored the ruins there, a picture of what it was like when it was the center of a major civilization began to emerge. 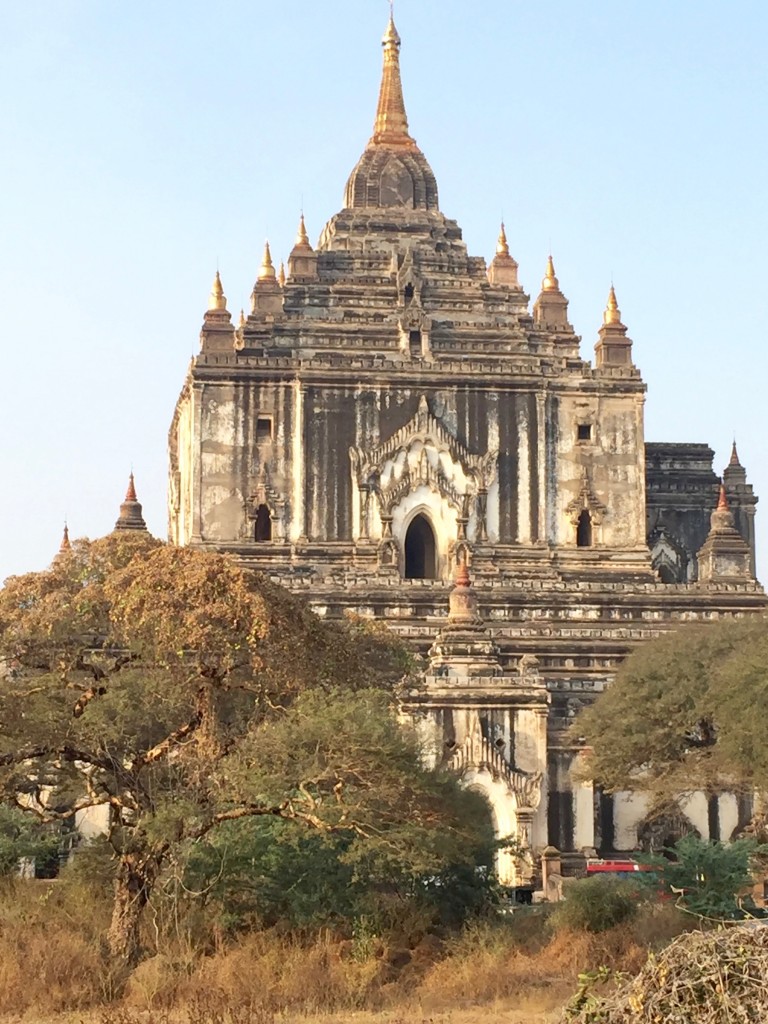 Image this at its peak

After many pagodas and Buddhas, we took a day trip to get some relief from the intensity (and heat) of the city and into the country. In Pyin Oo Lwin we found both additional insight into the depth of the Buddhist faith, and impressive physical beauty in Myanmar.

It turns out that Burmese Buddhists not only built pagodas to celebrate the Buddha, they also used natural formations as well. The Maha Ant Htoo Kan Thar Pagoda is in the Peik Chin Myaung Cave, and in every corner and niche of the cave there was a Buddha image or a pagoda. 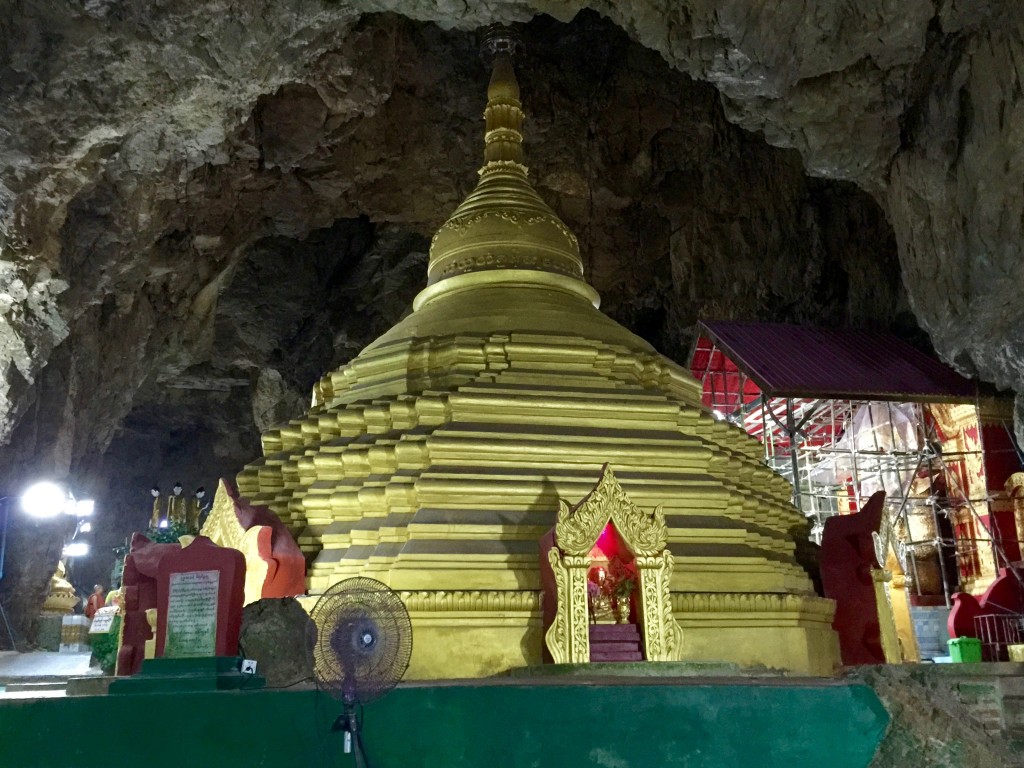 But just as we were getting more and more submerged into Buddhist devotion in Myanmar, we turned around and discovered its natural beauty and breathtaking scenery — Pwe Kauk Falls was there just outside the caves, and later it was a short drive to the Kandawgyi National Botanical Gardens and Butterfly Museum. We had been to many waterfalls and botanical gardens on our trip, but here in Myanmar, the natural world and its beauty was a refreshing change from the spiritual realm of pagodas and Buddhas. 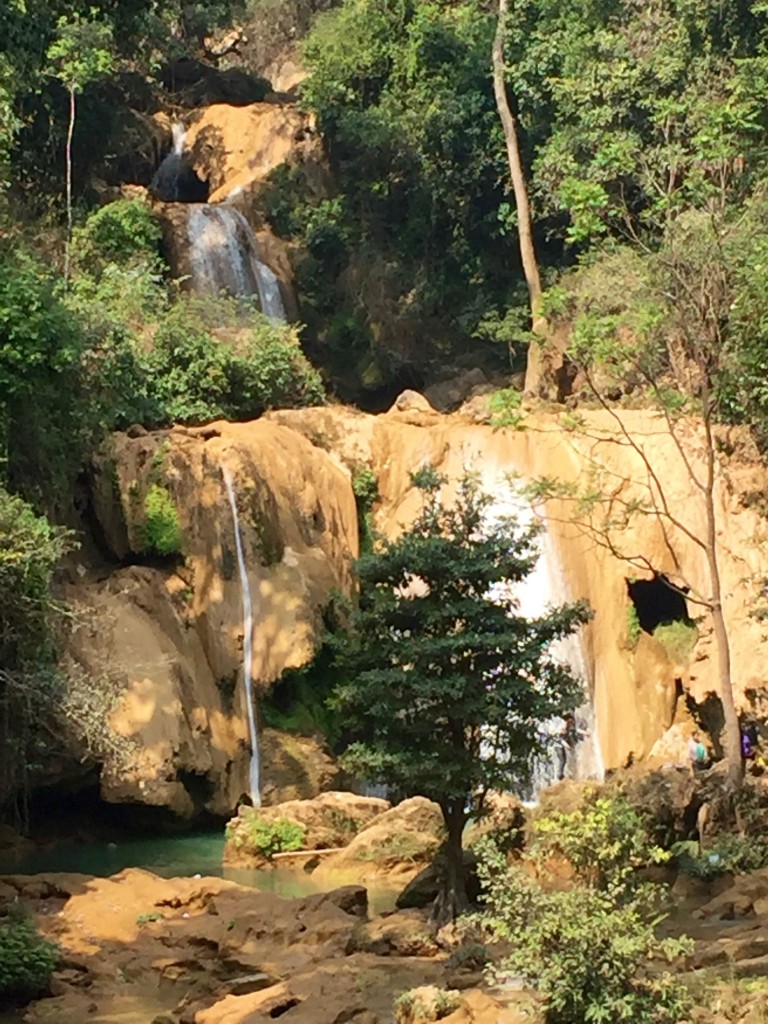 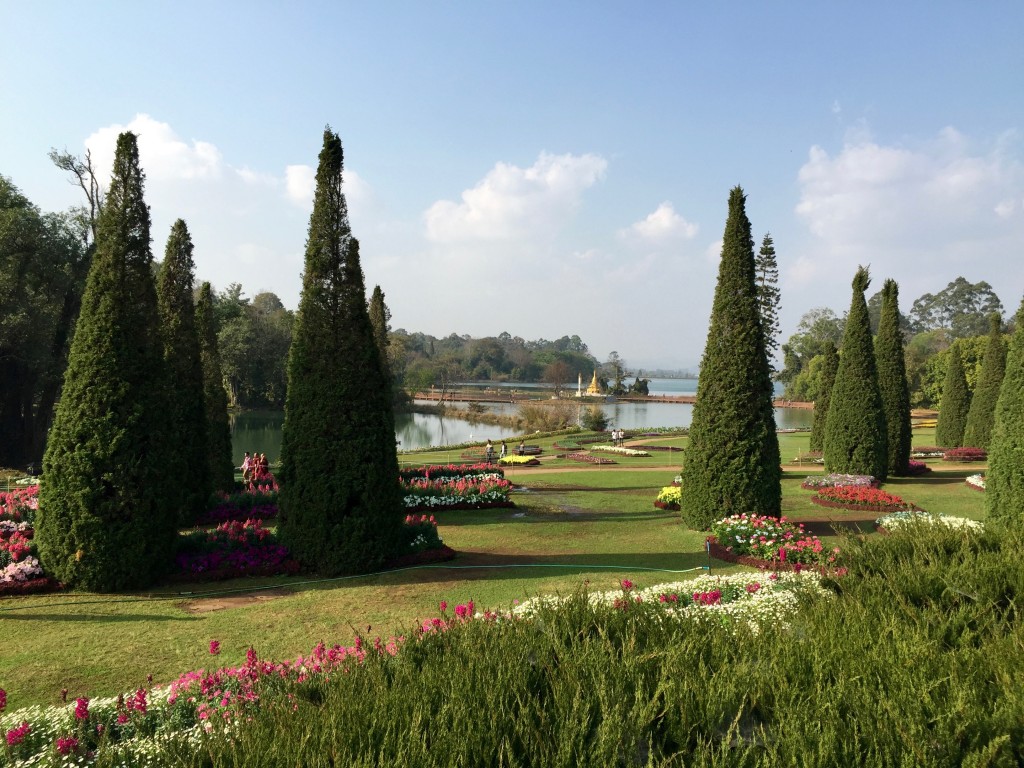 After a few days in Mandalay, we were off to Bagan, the crown jewel of Myanmar tourism. Given my new infatuation with boat travel, we arranged our itinerary so we could take a highly touted boat trip down the Irrawaddy River (going down the river was supposed to be better than going up the river since it was faster and would allow us to stop at a village along the banks). 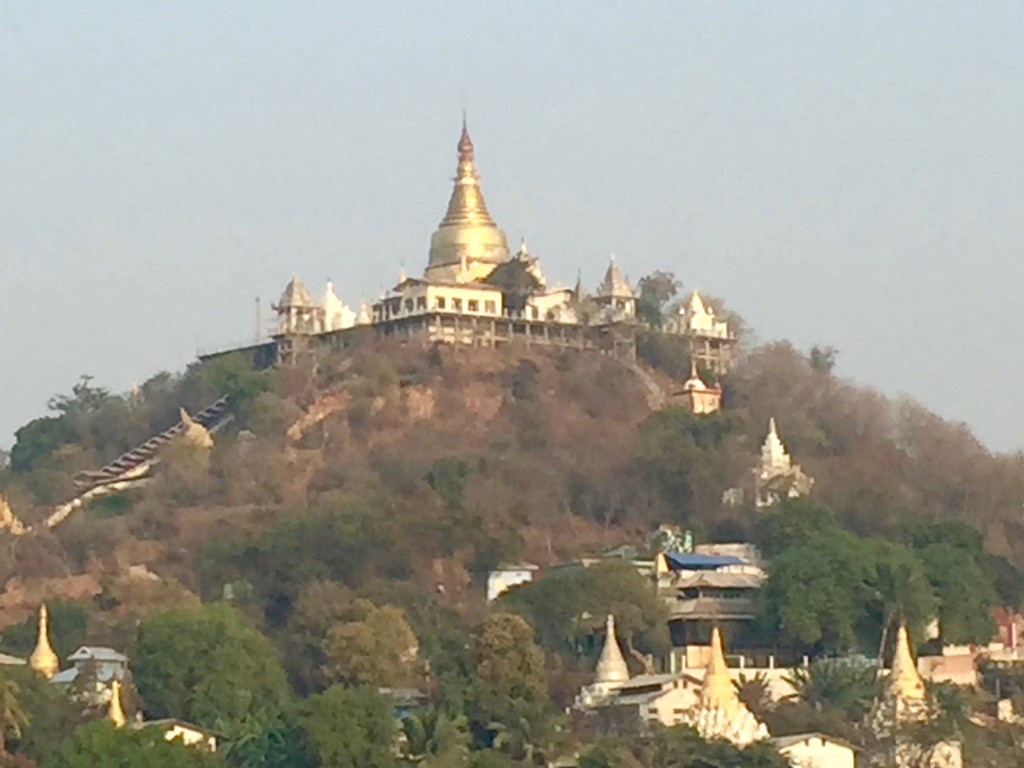 One of the hills of Mandalay from the river

We had already seen lots of villages on our river trips in Laos, and the banks of the Irrawaddy were disappointing in their sparseness — plus the promised stop in a village never materialized. The boat trip was 11 hours, and as the train, the first few hours were interesting, especially the sunrise and the sun glistening on all those gold pagodas, but after a while got tedious.

From 1044 to 1287, Bagan was the political, economic, and cultural center of the Pagan Empire, the first kingdom to unify the regions that would later become Myanmar. Marco Polo once described Bagan as a “gilded city alive with tinkling bells and the swishing sounds of monks’ robes”. (At least that’s what all the websites claim, although I never could find the original source.) During that time most of continental Southeast Asia was under the control of either the Pagan Kingdom or the Khmer Empire with its capital of Angkor. Bagan was dominated by religion, attracting monks and students from India and Ceylon, as well as from the Khmer Empire. Being there added another piece to the story, and my newly discovered appreciation, of Southeast Asia civilizations.

And as with the Khmer, temples and pagodas were built. During the kingdom’s height between the 11th and 13th centuries, that amounted to 14,000 religious monuments (approximately 1000 stupas, 10,000 small temples, and 3000 monasteries) in an area of only 104 square kilometers (40 square miles).

But it is not just the quantity of buildings that was impressive; it was also the magnificent architecture and the craftsmanship of the interiors. Unfortunately, only about 2,200 buildings remain today, most in various states of disrepair — yet it is still a spectacular sight. 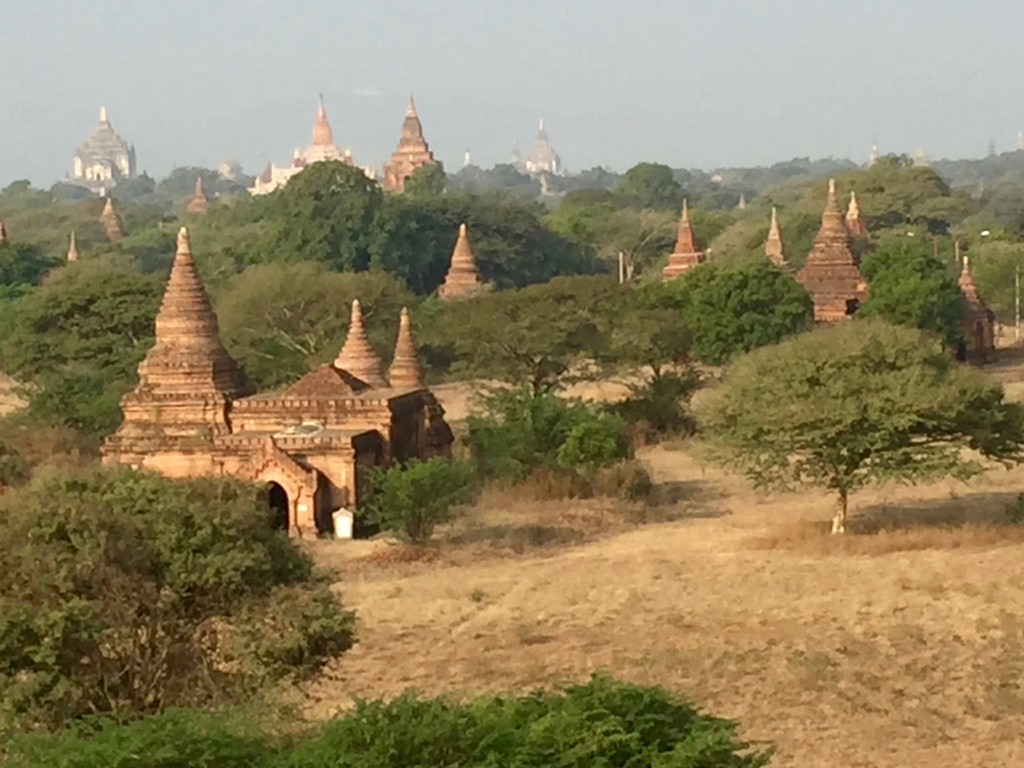 However, while Angkor was left to the jungle, Bagan survived into the 15th century with a small number of religious monuments added over the years. But after that, the old capital turned into a pilgrimage destination with only the most prominent temples maintained. Unfortunately, this included repainting with new frescoes on top of their original Pagan ones and new Buddha statutes. What was even worse was the state-sponsored renovations from 1752 to 1885, when the interiors of some of the temples were whitewashed, and painted inscriptions, and even murals, were added.

But it gets even worse. Bagan is located in an active earthquake zone, and in 1975 an earthquake severely damaged many of the monuments. In the 1990s, with the goal of transforming Bagan into an international tourist destination, the military government, in its infinite wisdom, started restoring them, paying little attention to original architectural styles, and using modern materials. To add insult to injury, and to attract even more tourists, the government added a golf course, paved roads, and a 61 meter (200 foot) watchtower. Although the government believed that their work and the hundreds of (unrestored) temples would become a UNESCO World Heritage Site, it hasn’t happened — probably due to a combination of the shoddiness of the restoration, and the (unsaid) political backlash to the military government.

Our last night in Bagan we had an unexpected treat. We met up with friends from Palo Alto that were on a river cruise and having a wonderful time (see my previous post on traveling in Myanmar). Having dinner with them was bittersweet. It was great to see them, but it also reminded us that as much as we loved our traveling, and the people and potential friends we have met in the last eight months, we really do miss our family and friends.