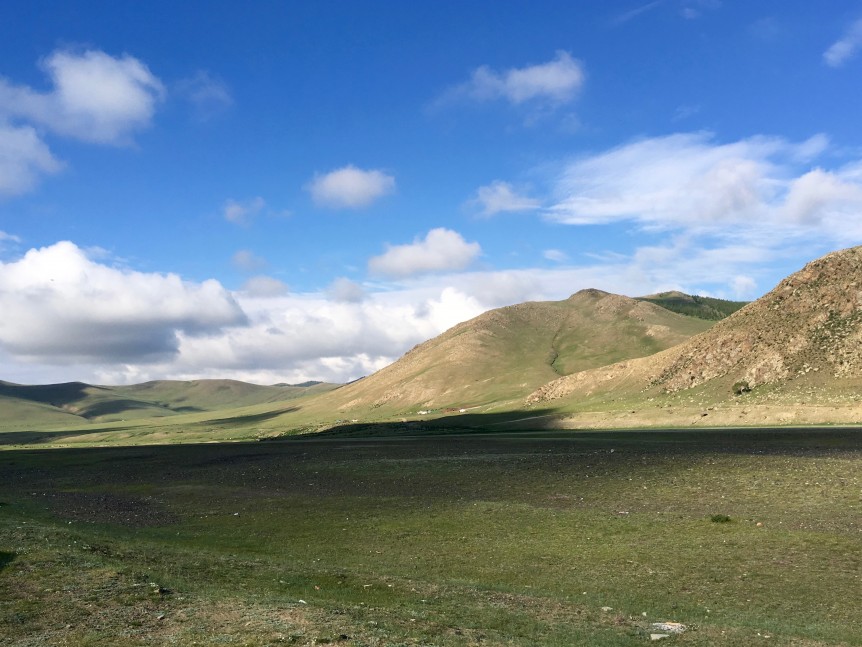 It seems as if I have always wanted to visit the steppes of Central Asia, and now, after exploring the Gobi, I’m on my way there — to the grasslands of central Mongolia and the Orkhon Valley, the home of Genghis Kahn’s Mongolian Empire (and two other great nomadic empires).

On the way, I learn about the love-hate relationship between the Mongolians and Stalin. Mongolians love him because he was responsible for Mongolia’s independence. Roosevelt wanted the USSR to enter the Pacific War with the Allies, and one Soviet precondition for a declaration of war against Japan was an American official recognition of Mongolian independence from China.

They hate him because Khorloogiin Choibalsan, the Communist leader of the Mongolian People’s Republic from the 1930s until his death in 1952 — Stalin’s go to guy in Mongolia (often referred to as “the Stalin of Mongolia”) — oversaw the violent Soviet-ordered purges in the late 1930s that resulted in the deaths of an estimated 30,000 to 35,000 Mongolians — Buddhists (which almost completely eliminated them from Mongolia), intelligentsia, political dissidents, ethnic Buryats and Kazakhs, and other “enemies of the revolution.” Although Choibalsan’s devotion to Joseph Stalin helped maintain Mongolia’s independence, it also turned Mongolia into the first satellite state of the Soviet Union.

Along the way we visit the Ongi Monastery Ruin, one of the victims of the Soviet-ordered purges. I had seen evidence of the purges before at the ruined Buddhist temple at Baga Gazriin Chuluu, but that paled in comparison to the devastation wrought by Stalin’s orders here. 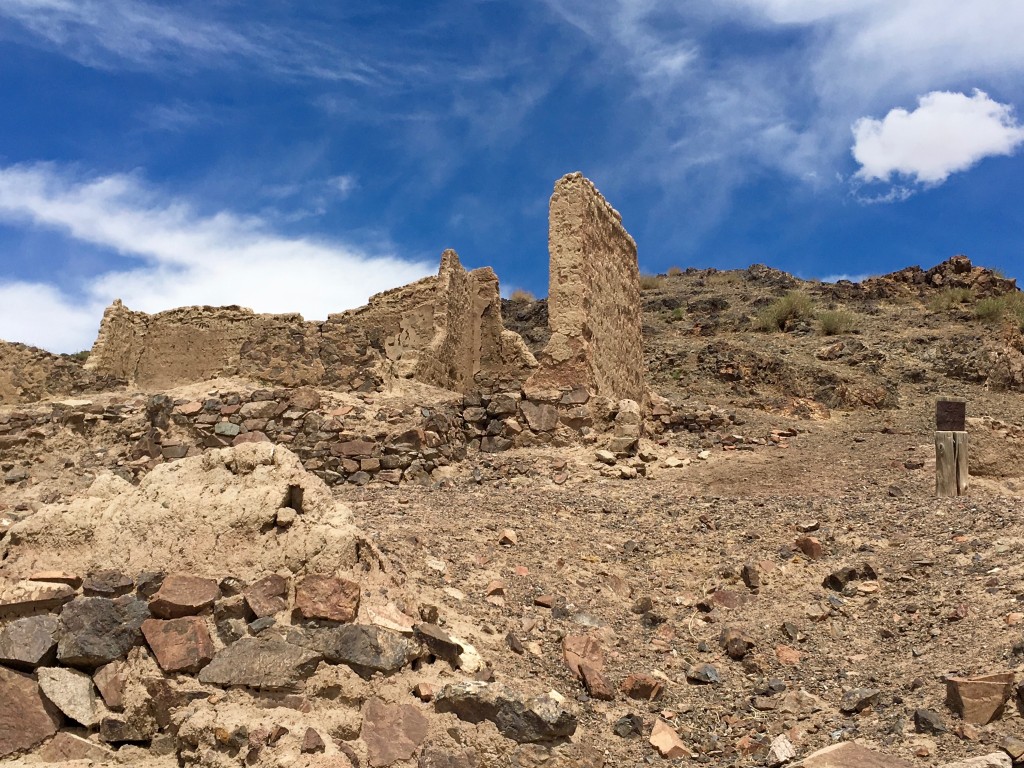 The total devastation at Ongi Monastery 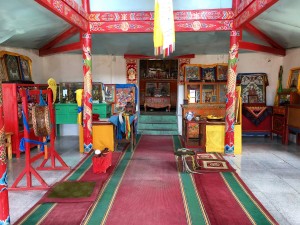 The new temple at Ongi Monastery

What was, at one time, two monastery complexes that faced each other across the Ongi River with almost 30 temples (among them one of the largest temples in all of Mongolia), four Buddhist universities, and over 1000 monks, was completely destroyed in 1939. The raw violence of the destruction is still visible and still palpable, even more than 80 years later. Over 200 monks were killed, and many surviving monks were imprisoned or forcibly conscripted into the Communist-controlled army.

But there has been a rebirth. In the 1990s, rebuilding started and the first temple was inaugurated in 2004, and a small museum in a ger and one of the stupas has just been reconstructed as well.

It was a sobering experience, and not much is said as we drive on to the Orkhon Valley — for many centuries, the seat of the imperial power of the steppes.

I don’t know why I was so fascinated by the steppes. Maybe it’s that it has greater seasonal extremes of temperature than anywhere else in the world, or maybe it’s the symphonic poem “In the Steppes of Central Asia” by Alexander Borodin (depicting an interaction of Russians and Asians as a caravan of Central Asians is crossing the desert under the protection of Russian troops), or maybe it’s the idea of a belt of grassland that extends some 5,000 miles (8,000 kilometers) with the Silk Road connecting Eastern Europe, Central Asia, China, South Asia, and the Middle East economically, politically, and culturally.

But more likely it’s the nomadic horse peoples of the Eastern Steppe, living as they did in one of the most severe climates of the Earth, that for millennia dominated the area. Being nomadic gave them the skills and technology required for successful warfare, and the steppe horse riders became some of the most militarily effective people in the world, limited only by their lack of unity (or, more accurately, their constant fighting one another). Periodically, great leaders or changing conditions would organize several tribes into one force and create an almost invincible power. Three of those great nomadic empires that ruled large parts of the world were centered here in the Orkhon Valley — the Huns, the Turkic, and of course the Mongols under Genghis Kahn.

During the thirteenth and fourteenth centuries the Mongols conquered and ruled the largest contiguous empire in recorded history, and at its height, included the majority of the lands from Southeast Asia to Eastern Europe, with an estimated population of over 100 million people. And while they were nomadic, they were not ignorant, or stupid, or barbarians.

The city of Karakoram was founded in 1220 in the Orkhon River Valley by order of Genghis Khan, and after the collapse of the Yuan dynasty, the Ming army sacked the city and massacred its inhabitants in 1388. Today, Karakoram is a small local township.

Two hundred years later, Erdene Zuu, the first Buddhist monastery, is built in Mongolia, using materials from the ruins of Karakoram. At its peak in the late eighteenth century, the complex of ornate gardens and 62 temples was home to over 1000 monks. In 1937, it too was partially destroyed, but by a different kind of invader — Stalin’s true believer communists, and only three small temples and the external wall with the stupas survived the initial onslaught. But in 1944 Stalin decided to maintain the monastery (along with Gandantegchinlen Monastery in Ulaanbaatar) as a showpiece for international visitors, to prove that the communist regime allowed freedom of religion.

As I wander through the monastery I could be walking on stones that Genghis Kahn walked on. 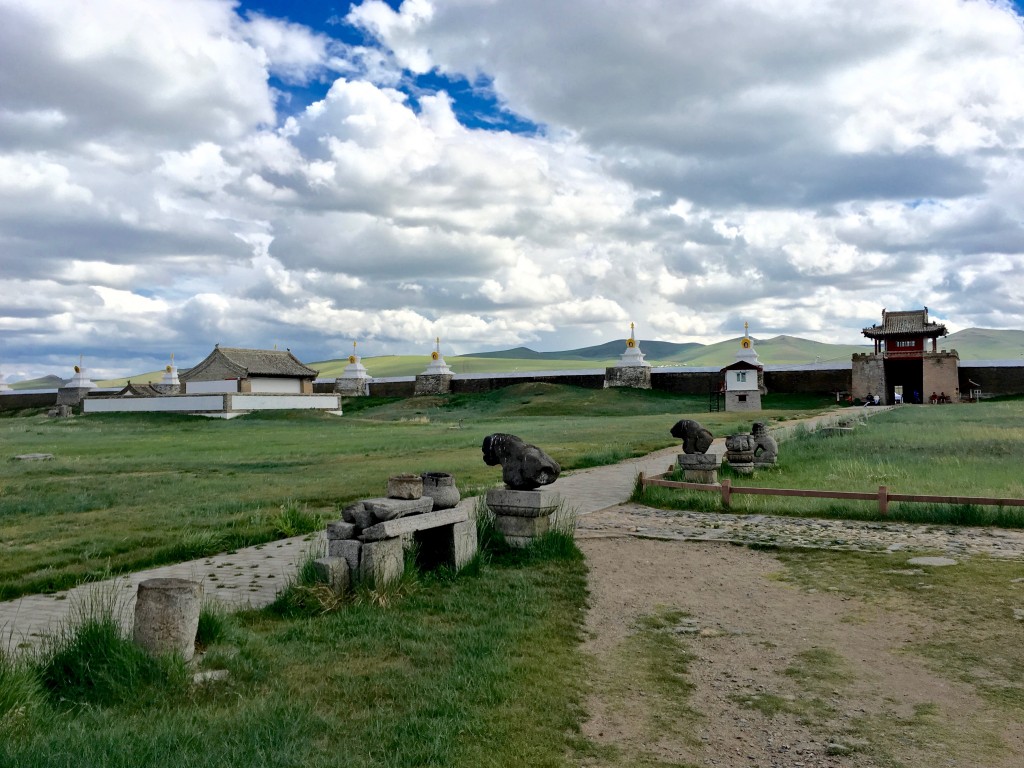 From the ruins of Karakoram

As we enter the valley, we are greeted by a hail storm, which quickly clears to open up to huge vistas of the valley and its surrounding mountains — impossible to capture in a photo, or in words, for that matter. As we drive into the tourist camp we see three cranes playfully soaring above the camp. 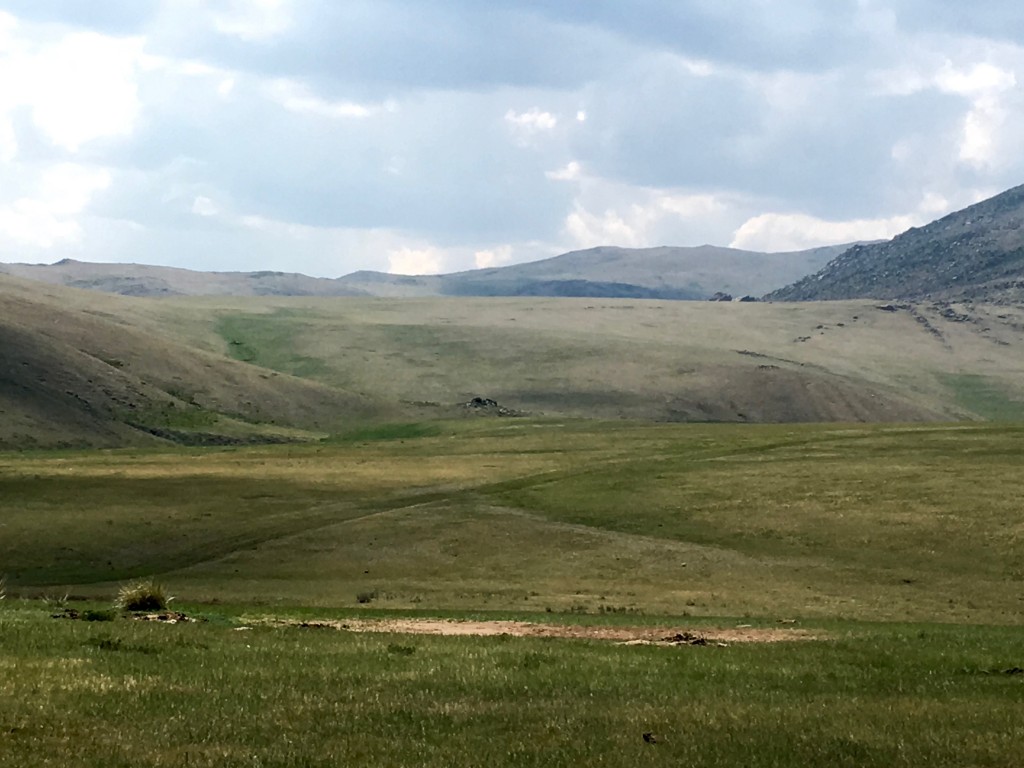 Just a small portion of the Orkhon River Valley

The next day we drive further into the valley to the Khushuu Tsaidam Monuments and a museum of the Turkic Empire. With its wide open vista, mountains, scattered gers, and herds of animals including herds of horses, I can understand why this valley was the center of three empires, as I imagine how the 100,000 horses, that Ganzorig said Genghis Kahn’s army used, would get lost in the expanse of the valley.

The excavations are so important to the Turkish government that they financed the building of the museum as well as the road leading to it.

Besides some other interesting artifacts, the main attraction of the museum is two monuments originally erected on carved stone turtles within walled enclosures by the Göktürks. Both monuments are stone slabs that date from the early eighth century,  on which is written (in the Old Turkic alphabet) the story of the legendary origins of the Turks, the golden age of their history, their subjugation by the Chinese, and their eventual liberation. 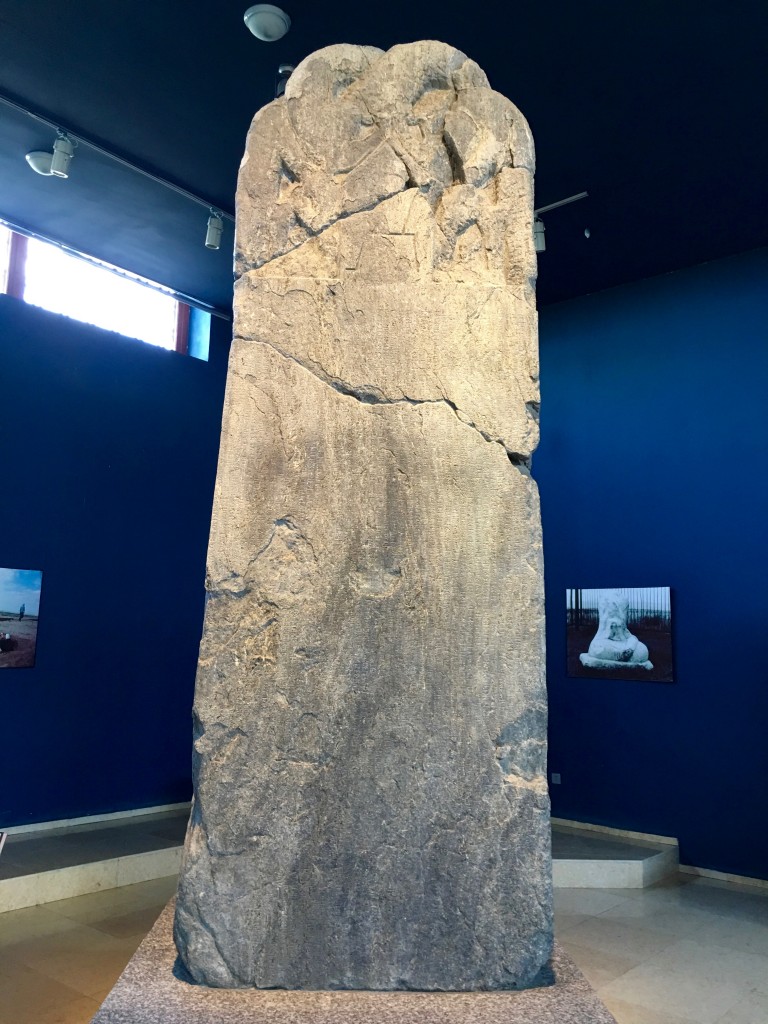 The legendary origins of the Turks

We drive to Khustai National Park to see the wild Takhi horses — the only wild horse subspecies still surviving in the twenty-first century. They were first discovered in western Mongolia in the late 1870s, but since 1969 expeditions have failed to find any left in the wild. Fortunately, a number were kept and bred in zoos, and Mongolia reintroduced them into the wild in 1992.

Frankly, I was lukewarm about this part of the trip — that is until we hiked up a mountain and saw these magnificent animals very up close and personal. It is the kind of remarkable experience that stays with you. 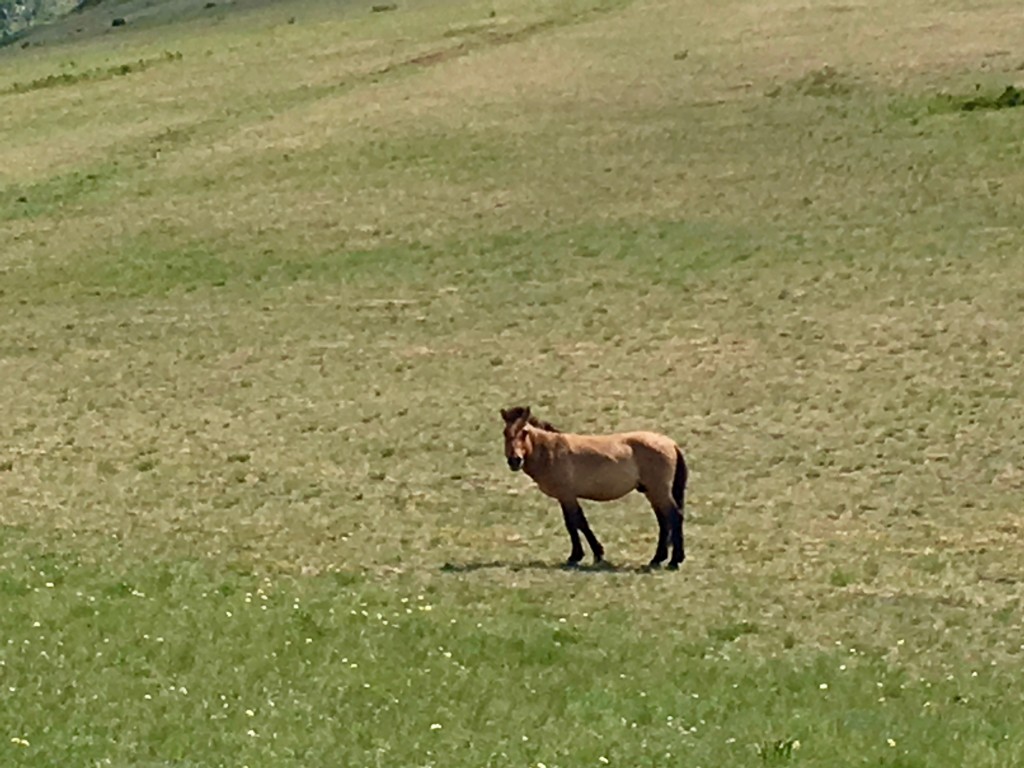 One of the few surviving wild horses

We drive on to visit a nomadic family and stay for a very short time. I am supposed to spend the night, but Linda was having problems getting to Ulaanbaatar to meet me (she had flown pack to the US as I explained in my previous post). It seems that in Houston (one of her stops) Air China would not ticket her through to Mongolia because she had no evidence (train, bus, or airline ticket, or even bicycle) that she would leave Mongolia (if they had known her, they would have known there was no way she would ever have considered staying in Mongolia during its winter). They would only ticket her to Beijing. So I had to scan her train ticket (which I hadn’t gotten until after she left Beijing) from Ulaanbaatar to Ulan-Ude in Russia into my phone and email it to her. I decided to return that night to Ulaanbaatar  where I knew I had internet access, and where she could reach me in case I needed to do anything else.

Turns out when she checked into her flight in Beijing for Ulaanbaatar, they didn’t even look at her outbound tickets out of Mongolia (after all that hassle).

The next day we met in Ulaanbaatar, both happy with our recent adventures, and the day after we were on the train to Ulan-Ude in Siberia.