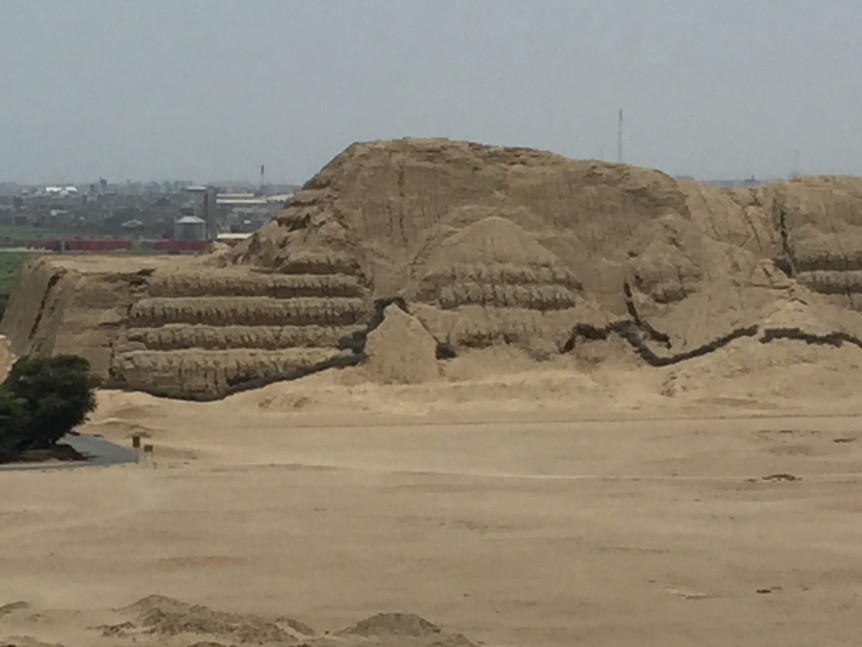 Because I was born into Western culture and have lived my entire life within it, I experience the world through its lens and filters. But I know that is not the only way to see the world, and in Peru, for the first time on this trip, it become obvious.

I became fascinated by the pre-Columbian civilizations in Peru — there were at least 50, and we got to explore four of them. Three of those we already knew about — Moche, Chimú, and Inca — and one an unexpected discovery during our trip — Caral. 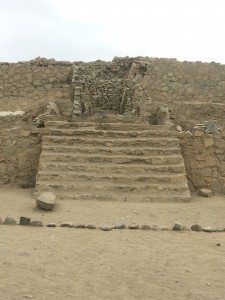 In Caral, the oldest civilization in the Americas, we were walking on steps that people walked on more than five thousand years ago (about 3200 BC). Caral is one of the four oldest high cultures of the world — second only to Mesopotamia (3500 BC) and is older than Egypt and China (both at about 3000 BC).

Caral is north of Lima on the Peruvian Pacific coast, and  quite a challenge to get to. A long drive on the highway and then endless driving over gravel then dirt roads, across an almost dry river bed, and then gravel roads again.

But it was worth the trip.

It was hard to believe that in 3200 BC there was a large village in Peru with a complex culture and an estimated population of 3,000 people. The elite lived in large rooms atop pyramids, craftsmen in ground-level complexes, and workers in small outlying dwellings. It was reassuring that some things never change.

We got to Caral at the end of our trip to Peru, after exploring other cultures. As we learned about the Moche, Chimú, and Inca civilizations, I became aware that here were cultural alternatives they never taught us about in school. These were ancient, not primitive, civilizations, and as sophisticated, (in some cases more so) than the Western civilizations of the time. And that the Spanish invasion ended that series of civilizations even gave me some insight into Western culture as well.

We started in northern coastal Peru at the Huaca Rajada archeological site. Interestingly, while I had assumed from the context that Huaca meant temple or something similar, I found out that Huaca can be any object (a mountain, waterfall, animal, man-made shrine, or artifact) inhabited by a god or spirit — a very different way of thinking about the world than most Westerners are used to, and a clue to the cultures themselves.

Huaca Rajada is an enormous complex of unplundered Moche tombs — including El Señor de Sipán (The Lord of Sipán) who was buried among dazzling treasures, a Moche priest, second only in status to the Lord himself, and The Old Lord of Sipán who was of the same or similar rank as the Lord of Sipán (DNA analysis showed the two were related). In the tombs we saw reconstructions of the items the three were buried with, and later the actual artifacts in the museum. 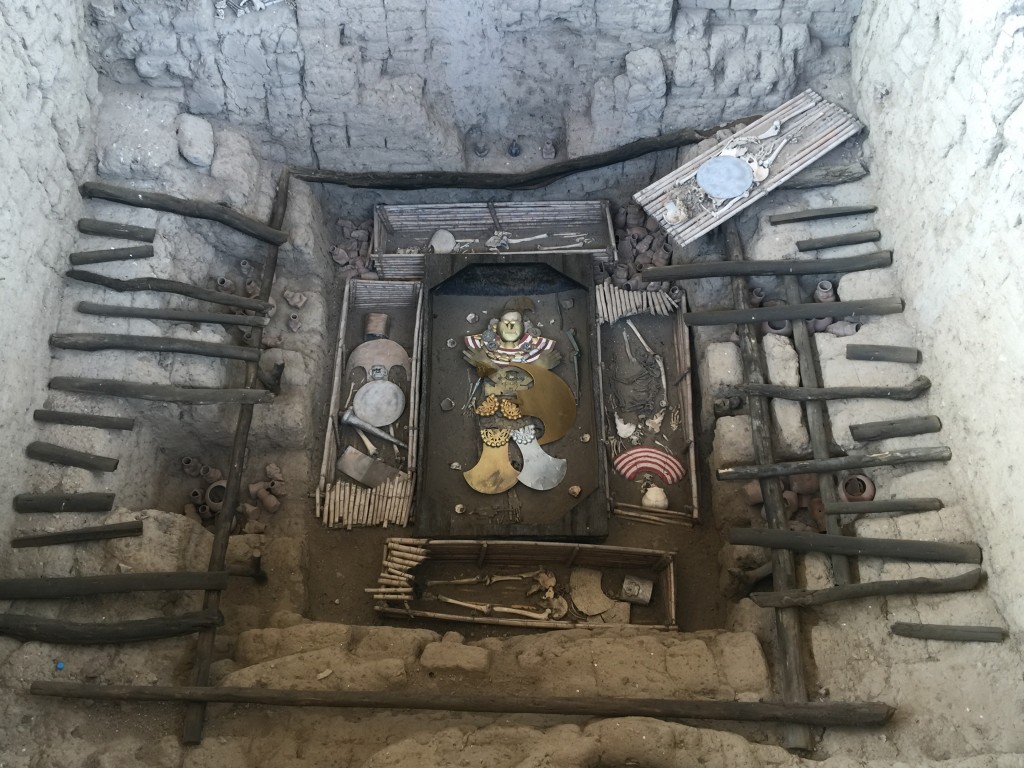 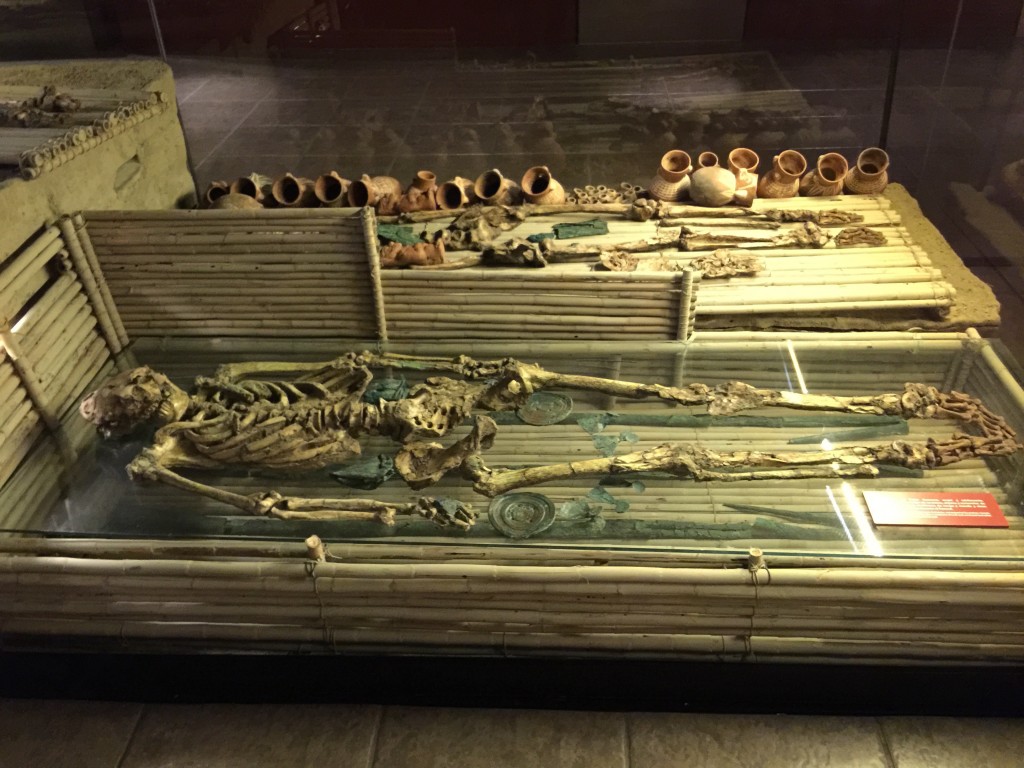 The Moche were deeply rooted in, and in tune with, a physical world they understood as having three parts. The first, the World of the Living, consisted of human beings and the rest of what we consider the natural world. The second, the below ground World of the Dead, the afterlife for humans (the world of their ancestors). And the third, the World in the Sky, beings with supernatural attributes. An interesting kind of trinity. Deeply embedded in their worldview was dualistic opposition (similar to the Chinese yin and yang) — gold/silver, day/night, land/sea. 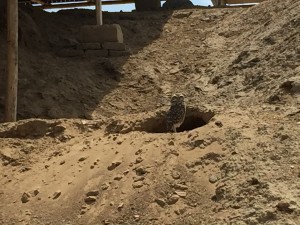 As we were walking, our guide pointed out a burrowing owl, a Moche sacred symbol. The owl walked on land in the World of the Living, and since it could fly, could be in touch with the Gods in the World of the Sky, and because it burrowed to build its nests, the human dead in the below ground World of the Dead.

Instead, of a market economy (or slavery) Moche society organized itself around a concept of duality and reciprocity. Each Moche social class or group contributed to the whole in its own way — food, labor, or goods. In return for the food, labor or goods, it was the job of the elite to maintain the social and cosmological order, completing the reciprocal relationship.

Although the Chimú did use money for exchanges, the Inca also did not. For the Inca one of the challenges in running an empire without a market economy was the distribution of food and clothing and other products from those who made it to those who needed it. The Inca used a system of reciprocity and exchange instead. Each village produced what its ecosystem would permit and gave its surpluses to other villages in different areas. Some of the surpluses were stored to feed soldiers or labor crews that were building temples or roads. Through reciprocity, everybody supplied and received the necessities of life.

But the Moche and Chimú had no written language (the Inca were somewhat chronicled by the Spaniards), so how did we find out about any of this?

Moche pottery is a portal to their way of life, customs, and their beliefs. The Moche captured detailed scenes of hunting, fishing, fighting, sacrifice, sexual encounters, and elaborate ceremonies in their pots. And the whole idea of that just really grabbed me. 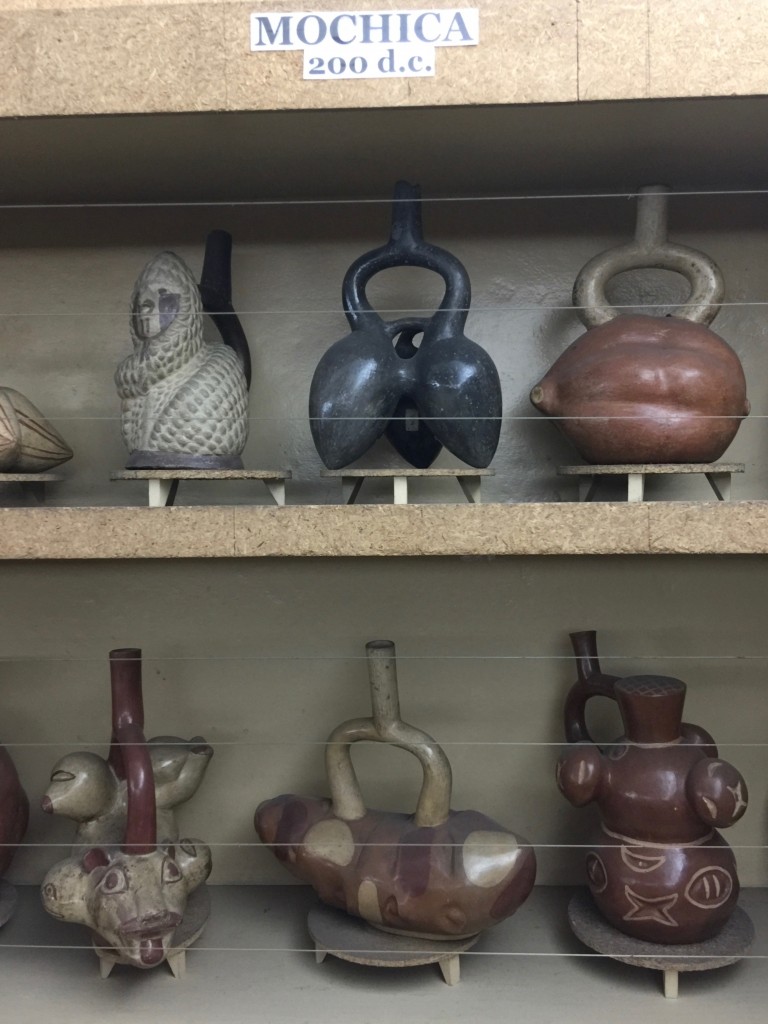 Moche pottery from a private collection

While most people have heard about the Inca — master artisans, architects, builders, and astronomers (I’ll talk more about the Inca in another post) — but other Peruvian civilizations had these kinds of skills as well. I was amazed by what those civilizations created, and, as I thought about it, become even more frustrated that our Euro-Centric culture simply ignores their accomplishments.

In Caral we walked around a city with a central public area with an amphitheater and three sunken plazas, and six large pyramids arranged around a huge plaza. From the top of the great pyramid, the rulers of Caral would have been able to monitor the entire city.  A 29-foot wide staircase opened into a series of small rooms, which included an atrium and a sacred altar. 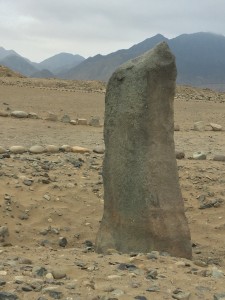 But what amazed me even more was (remember this was 3200 BC) that the a 2.3 meters high monolith, Huanca, (the standing stone), sits exactly due north of one of the pyramids, and the angle of the stone to the tops of two of the pyramids points to the sun on the winter and summer solstices. 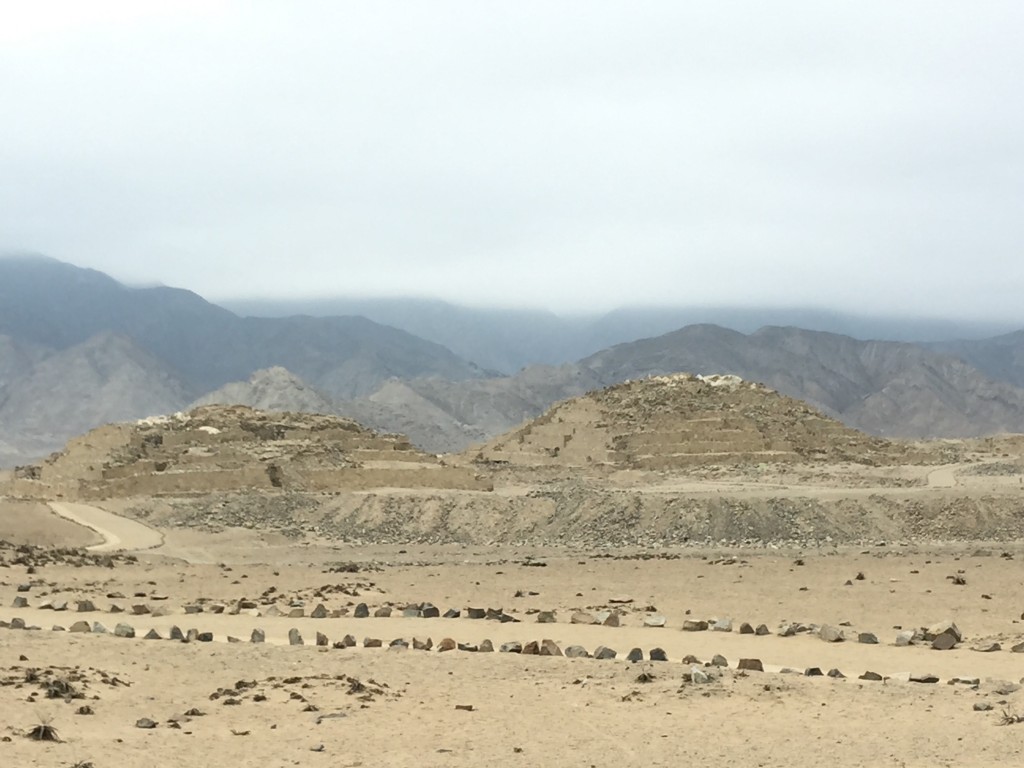 The Sacred City of Caral

The Moche built large adobe pyramids with stacked platforms, each holding a temple. When a Lord died the Lord and the temple were buried, and a new layer with a new temple was built on top of the last one, creating an even larger and higher pyramid, repeating the same art and murals of the previous era.

Huaca de la Luna, the cultural center of the Moche civilization, was constructed around 450 AD and had at least six construction phases spanning almost 600 years. It includes three large platform mounds with adjacent plazas, covering an area of 210 by 290 meters (690 by 950 feet). On the exterior walls we saw the remnants of mural paintings and sculptured reliefs. 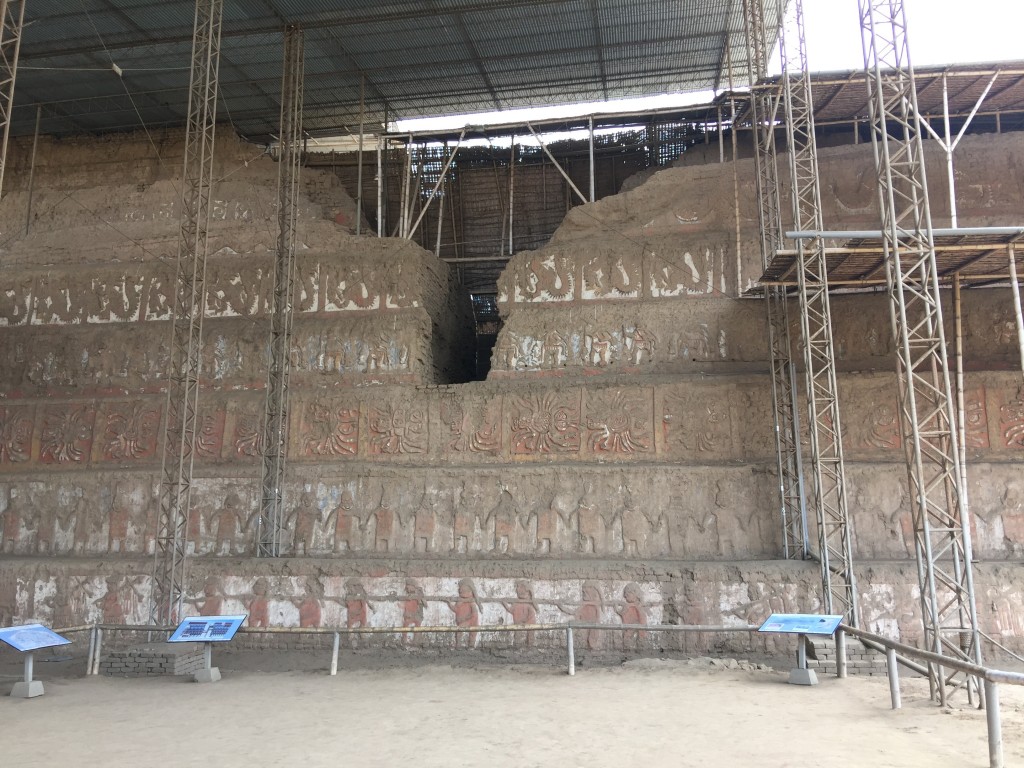 The Chimú built the adobe city of Chan Chan in 850 AD, —  the largest city in the world. It was the imperial capital where 30,000 people lived, and it lasted until its conquest by the Inca Empire in 1470. It was divided into ten palaces that were independent units, and within these units were buildings including temples, dwellings, storehouses arranged around open spaces, along with with reservoirs, and funeral platforms. Our guide explained that the layout of the city illustrated a sophisticated political and social structure. 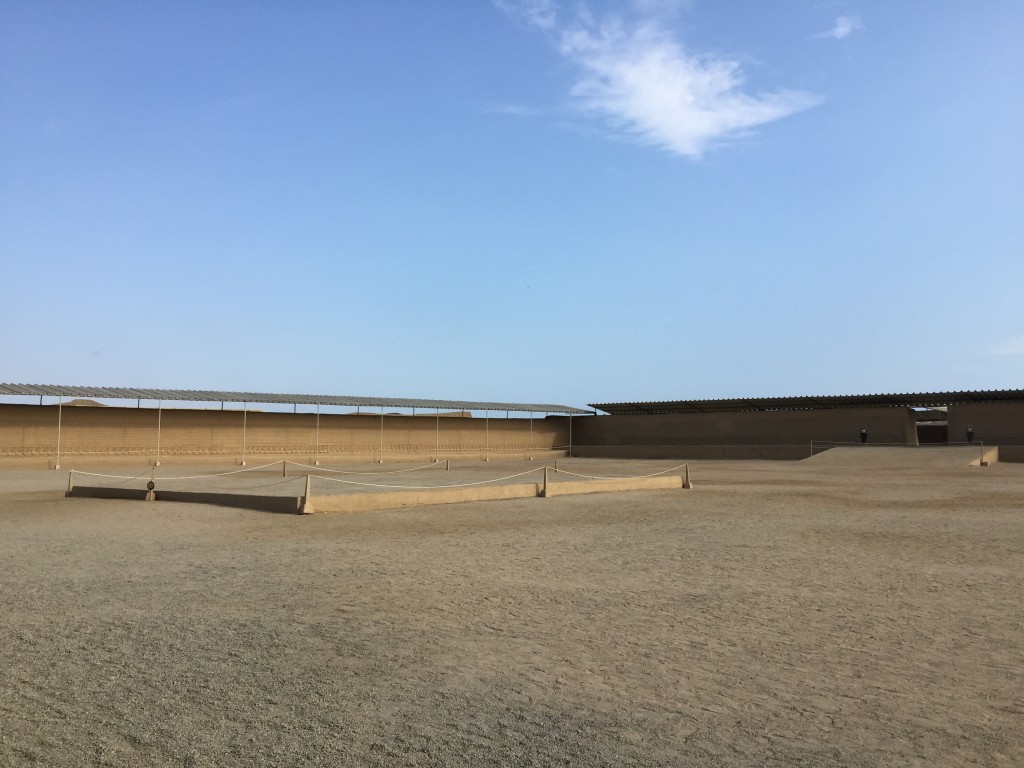 A plaza at Chan Chan 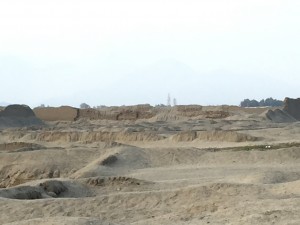 Compounds around Chan Chan to be excavated

Around these complexes were thirty-two monumental compounds and four production sectors for activities such as weaving, wood, and metal working, as well as extensive agricultural areas and a sophisticated irrigation system.

The Moche produced finely crafted gold objects, pottery, and textiles. They were pioneers of metal working techniques like gilding, early forms of soldering, and gold alloying not discovered in Europe until centuries later. They also channeled streams flowing down from the Andes into an extensive system of mud brick aqueducts and irrigation canals, many of them still in use. And there are signs that the Moche irrigated a larger area of land than farmers in Peru do now.

The Chimú produced a distinctive shiny black pottery in the image of people or animals. They too were experts at metallurgy and created objects and decorations in gold, silver, copper, bronze and tumbago (copper and gold) and they also produced beautiful and elaborate textiles of alpaca wool.

So what happened to the Moche, Chimú, and Inca?

No one really knows, but many archeologists believe a 60 year El Niño caused major problems with both fishing and agriculture for the Moche. This shattered Moche society as they lost faith in their religion and their leaders who had promised stable weather (their part of the reciprocal agreement). The leaders lost their authority and control over the people and the Moche turned on each other in a battle for scarce resources.

After the weather had returned to normal, this part of Peru was taken over by the Chimú.

The Chimú were conquered by the Inca in 1470, who absorbed parts of their culture just as the Chimú and previous cultures had absorbed earlier cultures. The Inca, for example, had a three level cosmology similar to the Moche’s. The Inca were then invaded by the Spanish in 1532 and finally defeated in 1572, ending 5000 years of Peruvian civilizations.