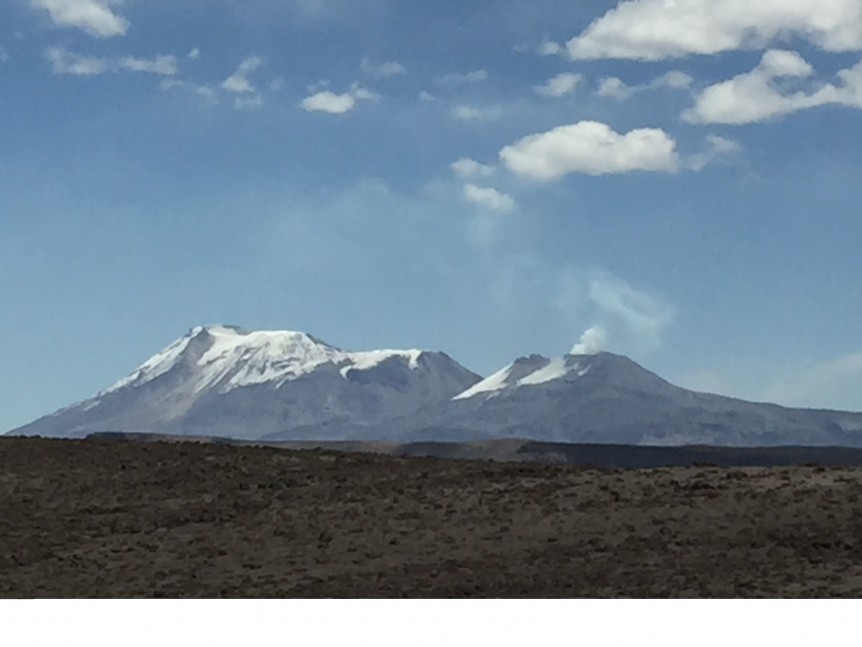 After our explorations of Northern Peru, we headed east to Arequipa to begin our trip across the Andean Plateau to Colca Canyon, Lake Titicaca (Puno), and eventually to Cusco and Machu Picchu.

Until we got to Peru, we had spent most of our time in the cities and towns of Central and Eastern Europe. And while I am a city guy, I also appreciate the raw physical beauty of nature. We would be getting away from the urban sites in Peru and up to, and across, the spareness of the Andean Plateau. But before we did that, we got an interesting introduction to Spanish colonial culture.

We had stopped in Arequipa to begin getting used to the altitude. Arequipa is at 2335 meters (2000 feet higher than Denver) but the next day we would be traveling to 4335 meters, and then spend a considerable amount of time at 3800 meters and above for a few days afterward.

The star attraction in Arequipa is the Convent of Santa Catalina, established in 1579, and closed to the public for almost 400 years until 1970, it is still the home of a few nuns. In the late 16th century, wealthy families gave their second born to either the priesthood or the nunnery. After the rigors of four years of training, a nun’s parents were free to build her a house on the convent grounds and supply it with furniture and even servants — it was the caste system at its finest. But at the end of the 19th century Pope Pius IX ordered the nuns to live in a way that was expected of nuns — in a community (not individually) and sharing the wealth of the community with all. That meant, much to their collective dismay, all the poor rich girls had to move into the dorms. 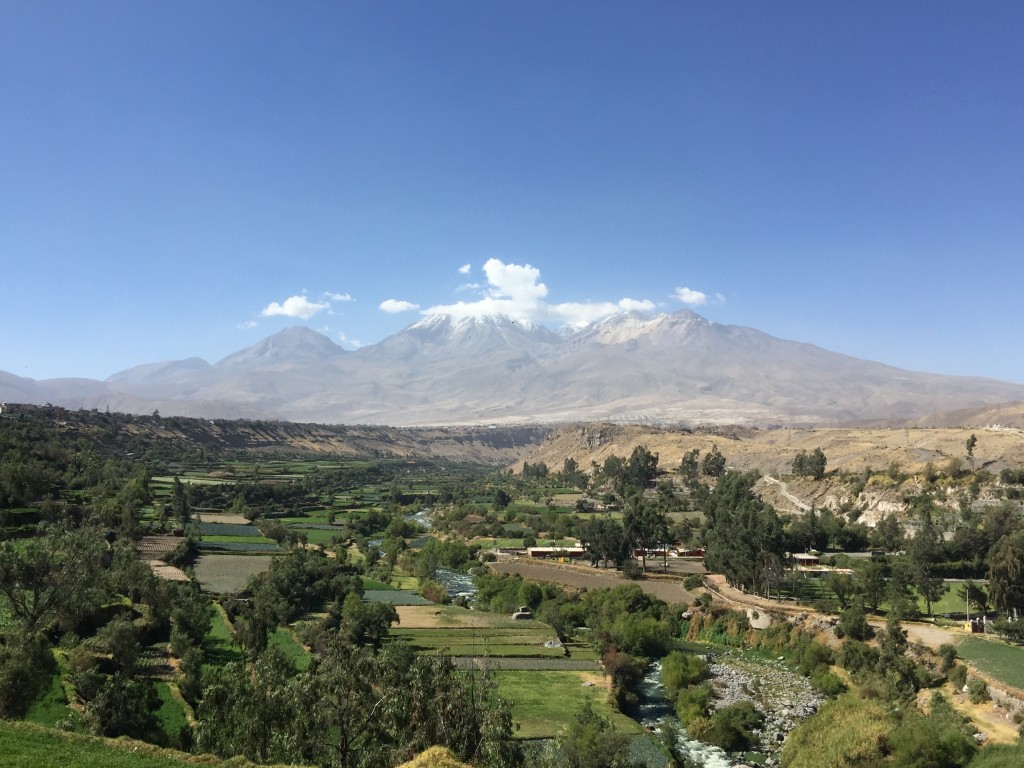 Arequipa – A lovely setting for a convent

But it was the next day that we were looking forward to as we set off for the Andes, starting our trip up to, and then across the Andean Plateau, and to Colca Canyon. There is something about high mountain plateaus that has always appealed to me, and the Andean Plateau or Altiplano (Spanish for high plain), in west-central South America is the most extensive of high plateau outside of Tibet. It is a sparse and windswept region with vast expanses of puna grasslands, active volcanoes, and lakes (including Lake Titicaca).

And it is spectacular!

As we made our way through the Altiplano we crossed the Aguada Blanca and Salinas National Reserve, created to preserve the flora, fauna and the landscape of the Altiplano. In the reserve we stopped at Pampa Canñahuas (4335 meters) (also known as the Mirador de Los Andes) with majestic views of the Cordillera (mountain range) Chila and its great volcanoes (with Sabancaya currently active).

At Pampa Canñahuas we could see alpaca and vicuna in the grasslands with Volcano Misti in the background. 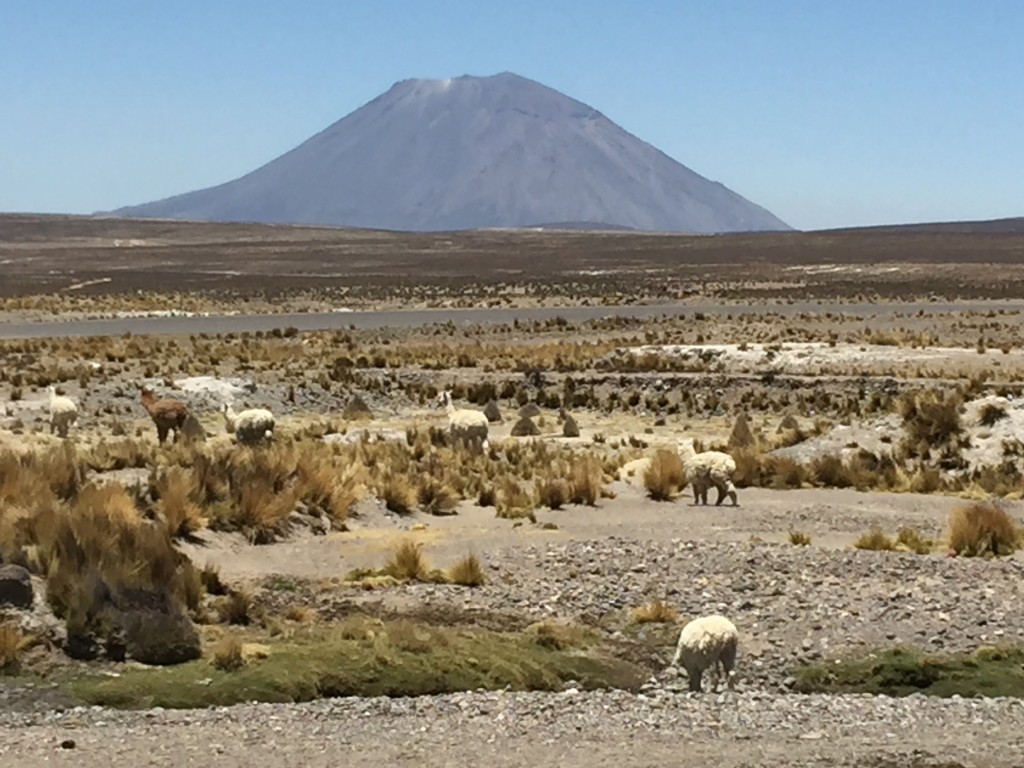 The landscape seems sparse, but it not only calls attention to the majestic mountains, it also has a minimalist beauty of its own. As George Mallory, a Himalayan mountain climber who perished on Mount Everest in 1924 said, “One comes to bless the absolute bareness, feeling that here is a pure beauty of form, a kind of ultimate harmony.”

We then continued to Patopampa Pass (4,910 meters), the highest point of the trip, and which, both literally and figuratively, takes your breath away. 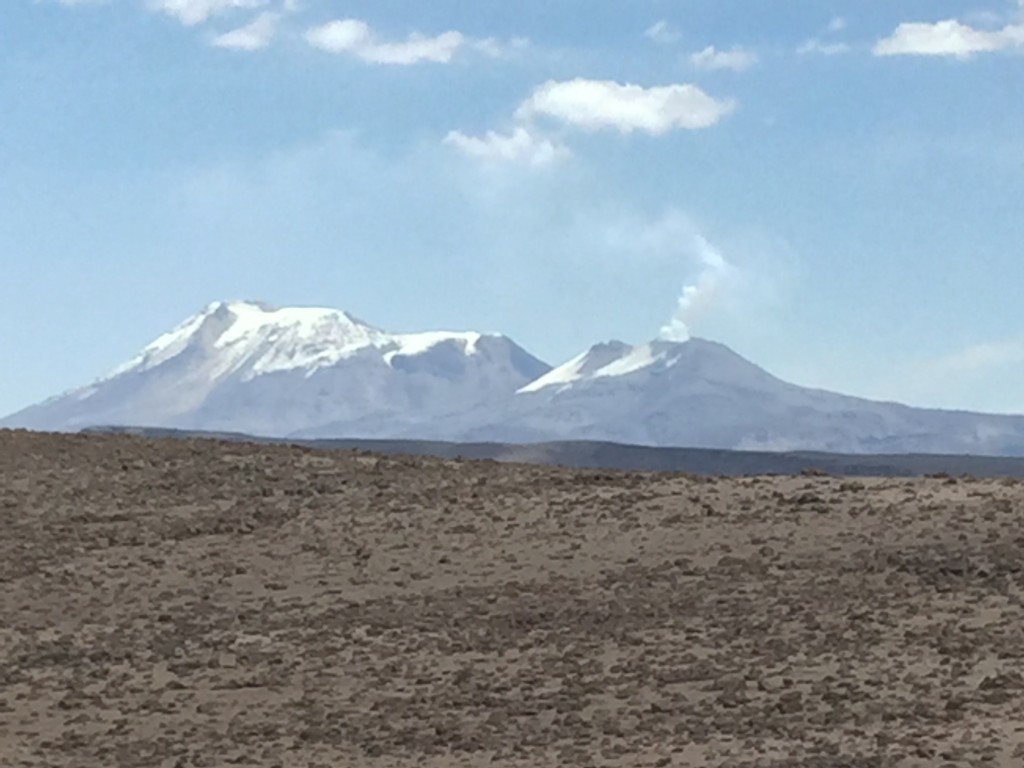 After coming down from the high point, we reached Colca Canyon. It is the world’s second deepest canyon, 3,400 meters deep and 200 kilometers long, only a shade shallower than nearby Cotahuasi Canyon and nearly twice as deep as the US Grand Canyon. From here we could see Nevado Mismi, which contains the headwaters of the Amazon — it was amazing. 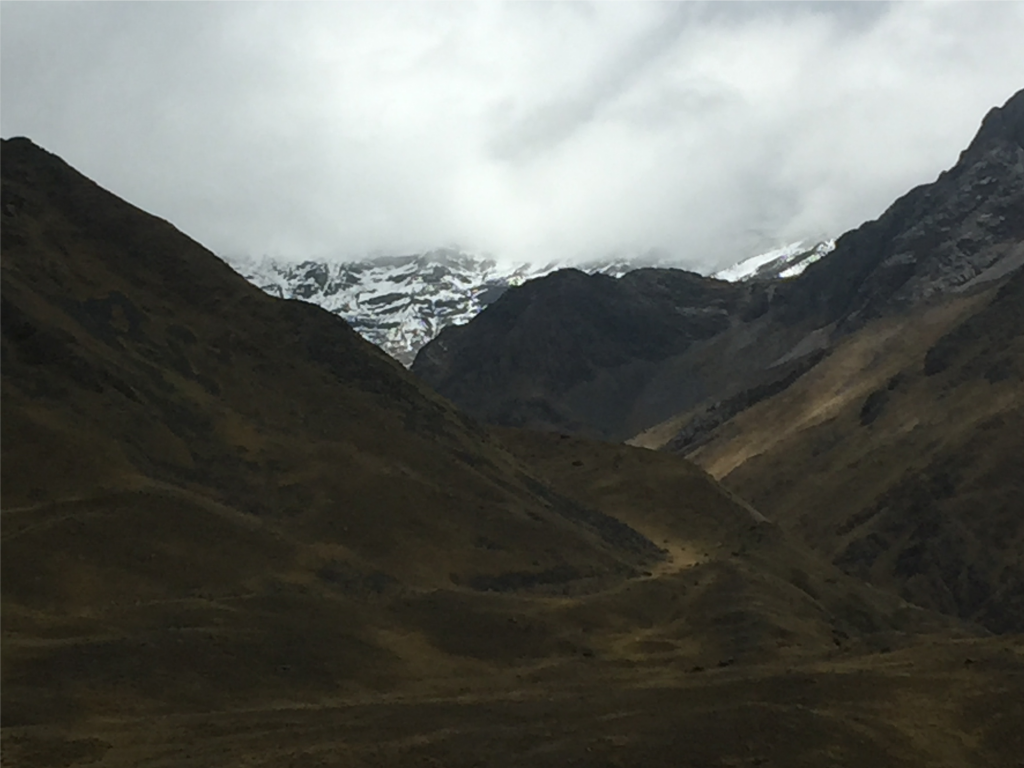 More spectacular mountains and a view of Nevado Mismi, the headwaters of the Amazon

One of the stops along the canyon was La Cruz del Condor (the Condor Cross), a great place to appreciate the deepness of the canyon and to see the condors and where they make their nests. The nesting grounds is a sacred place — the condor playing a major role in Inca cosmology. 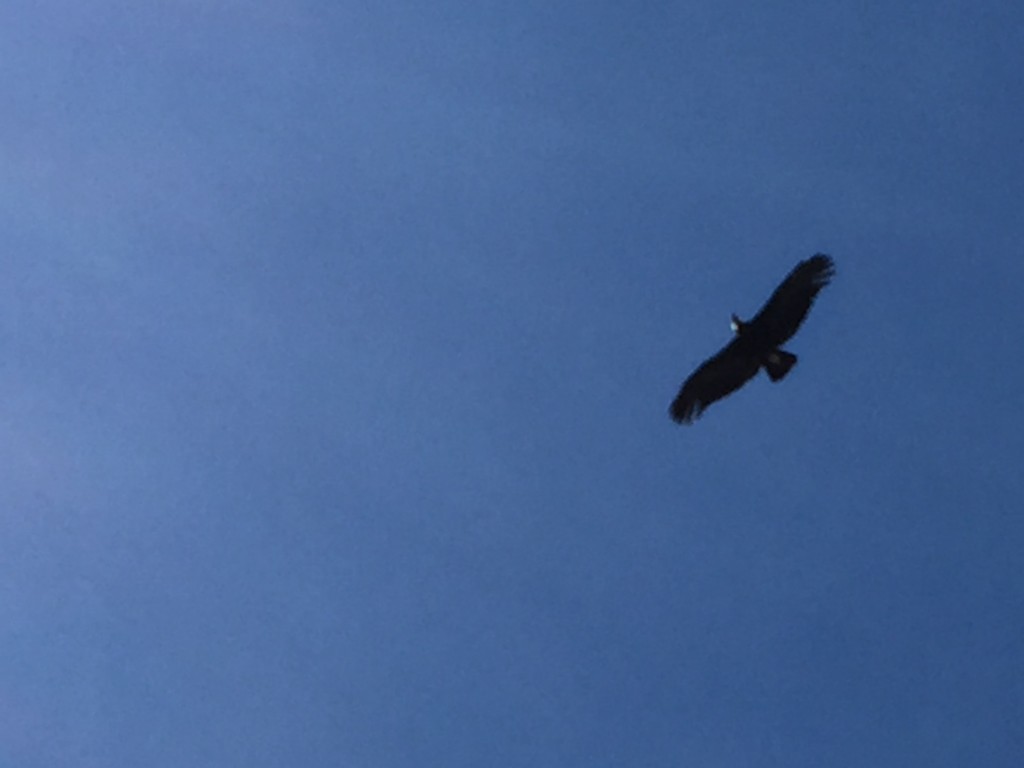 One of the few condors that flew that day

Similar to the Moche, Incan cosmology was ordered into three Pachas or three world-moments. One of the things I found intriguing about Incan cosmology is the realms are not solely spatial, but were simultaneously spatial and temporal — they could refer to the whole cosmos or to a specific moment in time — something I (as a Westerner) have a hard time getting my head around. The Ukhu Pacha (Quechua: the lower world) was located within the earth’s surface and home to the dead as well as new life. The Kay Pacha (this world) was the world in which we live and that people, animals, and plants inhabit. The Hanan Pacha (higher world) was the world above us that included the sky, the sun, the moon, the stars, the planets, and constellations, as well as the gods.

The snake, puma, and condor are the totemic representatives of those three levels.

The challenge to seeing the condors is that whether they fly on that day depends on the weather conditions and if they feel like it (it is still not a Disney attraction). The best time to see them early morning when it is starting to get warm, which creates upward air currents that the condors like to soar on. 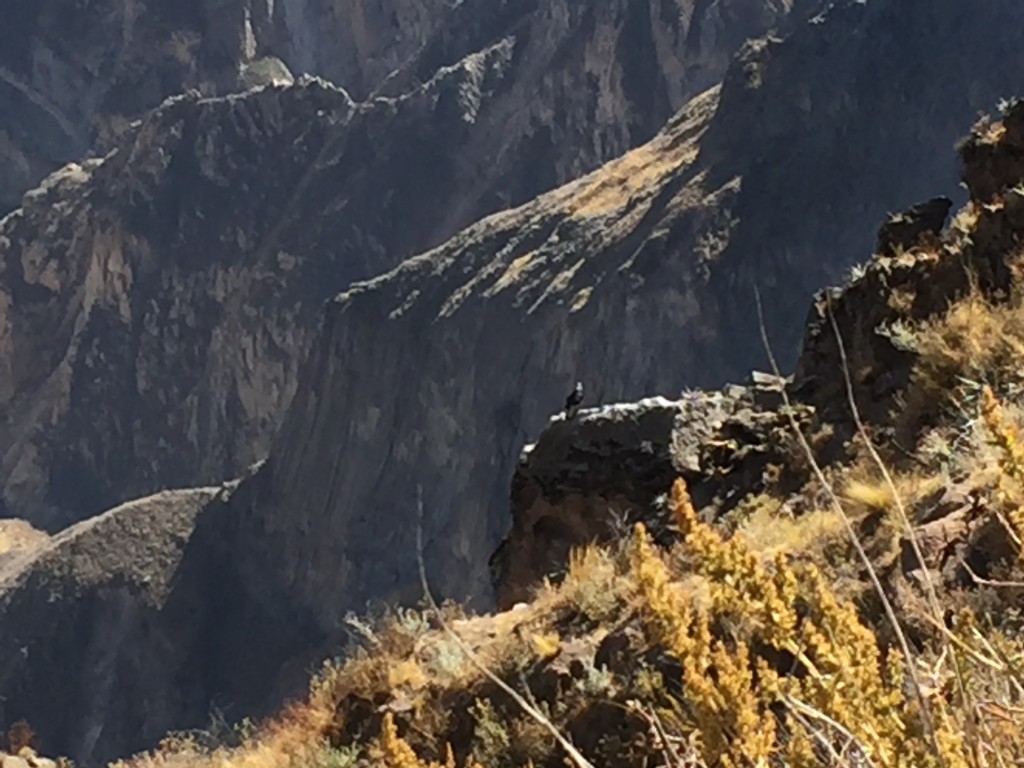 Colca Canyon – with a condor watching the tourists

From Colca Canyon it was off to Lake Titicaca. Along the way there was beauty in the piled rock forms, roofless buildings, and roadside memorials. To my delight, we found flamingos (I’m a big fan of flamingos dating back to family trips to the San Diego Zoo) at Lake Lagunillas. 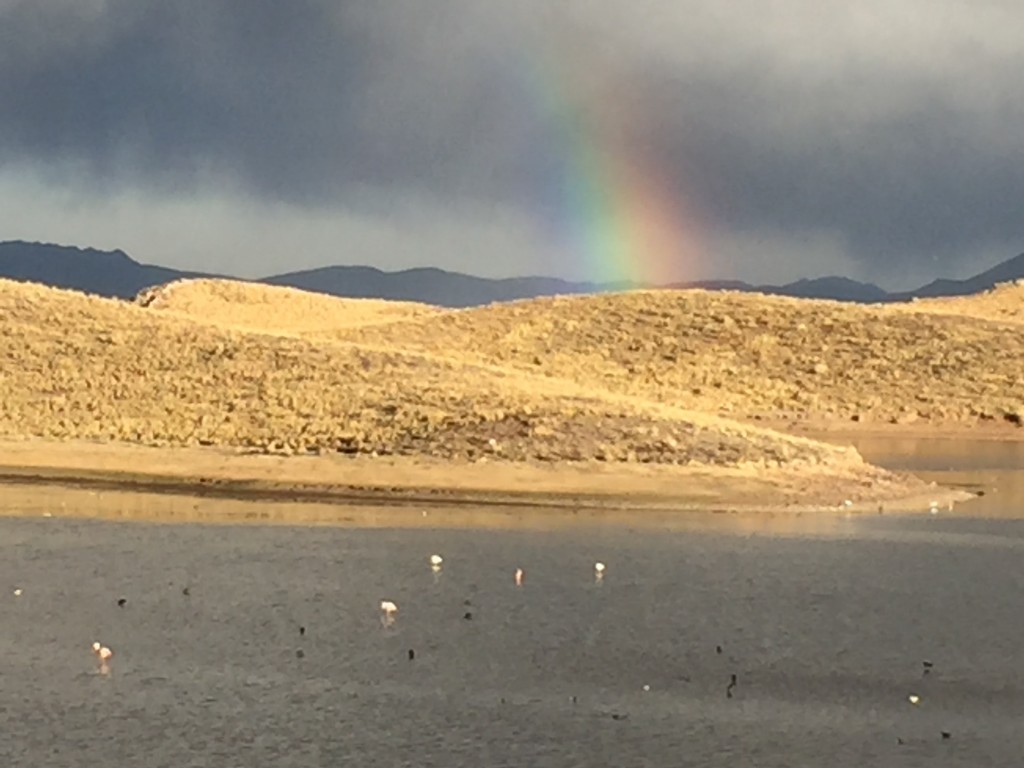 A trip across this spectacularly beautiful part of the world, as we moved from place to place, made me appreciate how our world appears to fit together so well — and a inspiring example of self-organization.